April 17th
Jeep Td after Paradise Canyon(382.6)-Hackberry Canyon(404.8mi)
22.2mi(GPS says 23.1mi)
Brrr! We both awoke to frozen condensation on our tent ceilings. I am lucky that I seem to perspire and exhale less than Katherine, as she also had the condensation frozen on her sleeping bag. Her thermometer read 25 degrees when we hiked out of camp at 7am. Again, thankfully there was no wind, so it made the hiking more enjoyable and my fingers and toes soon warmed up. We had about 12mi of nice dirt road walking this morning. It’s like a perfectly big wide trail just for us. There was thick frost on all the sage and we could see snow on a set of mountains off in the distance. 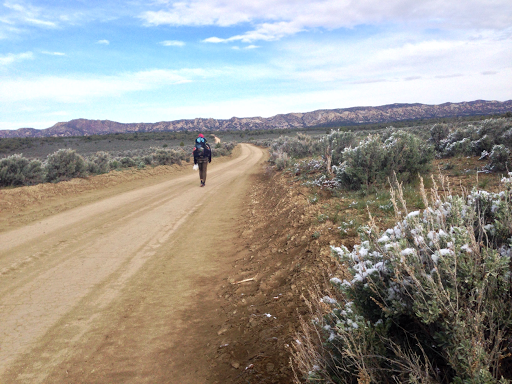 The clouds didn’t lift all day, so the cold remained with it in the 40s today. Tomorrow, we heard it will get a bit warmer. I actually prefer these cooler temps to the hot days, so I’ll take everyday like this we can get! The clouds were just glorious and really enhanced the scenery along the road walk. 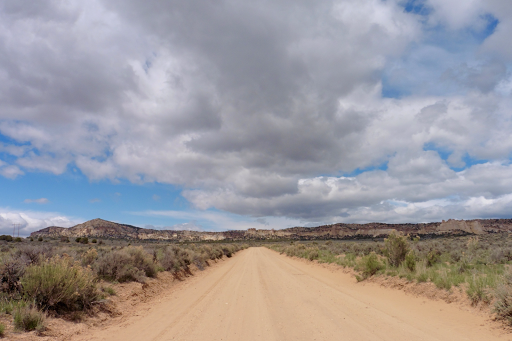 It was such smooth terrain that I was able to catch up on some blog entries I hadn’t finished putting the photos in the last couple of nights due to cold and just plain falling asleep. It was nice to multitask and get some things done. I even listened to more of The Interestings. Here I am “multitasking.” 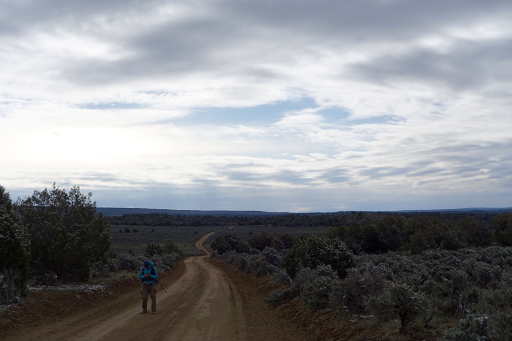 Our plan was to stop at a Grosvenor  Arch 12mi into the day for lunch. We are in Grand Staircase-Escalante National Park and it’s a popular one. We were excited for a picnic table, a pit toilet, and possible trash can. Just a mile before Grosvenor Arch, we topped out on a hill and I got LTE on my phone. It was super fast and I just had to stop and load the last four blog posts and some emails. By the time I arrived at the trailhead, Katherine was there talking to a couple that just happened to be there and they offered us water and to take our trash. Now that’s trail magic on the Hayduke! Goodbye alkaline water(from which we both are experiencing some digestive issues)! We also got enough water to cook dinner for lunch since we are in a long waterless stretch and we won’t see water til tomorrow. Thanks so much to Andrew and Emily for the much needed water and for taking our trash off our hands! 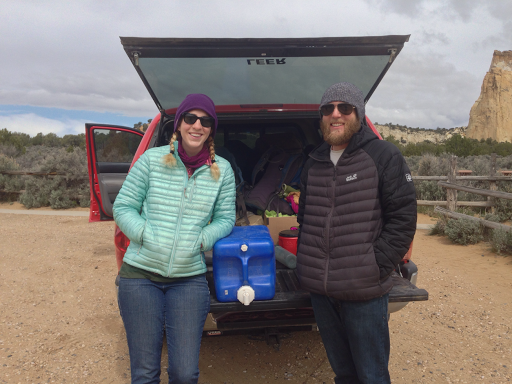 There were two picnic tables and we were able to spread things out to dry while we ate. Other day hikers came and went while we were at the trailhead. Two guys drove up who were photographers and they had every huge camera you could imagine. They gave us some strawberries and we talked a bit. While one camera was setup near us to grab a time lapse, they hiked over to the arch and had a drone they flew up over the arch to get shots. One of them had a fancy Polaroid camera that looked like it was from the 50s or something he took a photo for us to keep. The exposure got a bit messed, up, but it was fun! They even took more shots for us with the really nice cameras (one was huge and had its own cooling fan attached) that we may one day get. It was cool to see such unique and huge cameras. 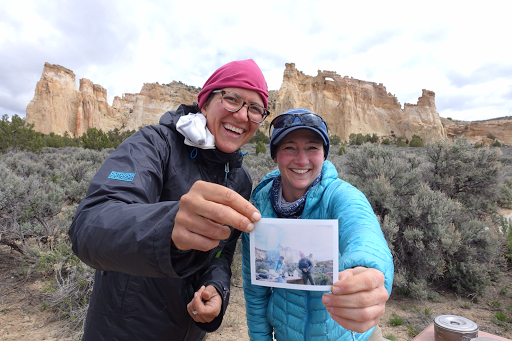 As if that all wasn’t enough, as we were packing up, two more Haydukers hiked up that we had yet to meet and unknowingly hiked past early this morning while they were camped. Two really nice Colorado brothers named Ethan and Chase. 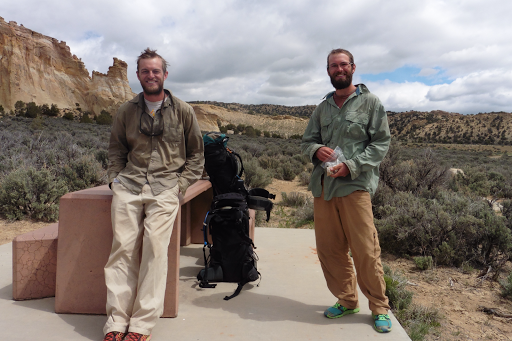 They are the 5th & 6th that we’ve met and I know of two male pairs ahead of us and one solo gal that started the week after us, so that makes 13 this season so far doing a full thru. That’s a lot for the Hayduke. Ethan and Chase started two weeks before us, are doing the guidebook route without alternates, and are doing caches so they don’t have to go into any towns. They haven’t been to town yet! No pizza, burgers, or milkshakes! They may go in a week or two to get their Grand Canyon dates figured out. They’ve been doing shorter days than us since they have 9 resupply caches and can split the long carries that towns limit. They stashed them before their hike in big buckets and will drive to pick up the buckets after the hike. With our varying routes and paces we could possibly end up leap frogging with them every so often, so they may pop up again in the next month. Today they stopped early to camp at their cache while we hiked on. It was nice to meet them and match those footprints to people.
From the Grosvenor Arch, it was about 5 more miles of mostly road walking to the big event of the day, Round Valley Draw Narrows. Yay Narrows!!! On the road walk, I got to watch two episodes of Transparent. I haven’t gotten any time in the evenings or towns to watch lately and was quite happy to watch a couple as I walked the road. When we got to the narrows, it was quite a high tight drop to get in and I was uneasy at first, but it wasn’t as tough as it looked. There was even a strap at the spot where packs needed to be lowered and that’s the first time we’ve had to do that this hike. I definitely have some duct taping to do on the bottom of the side pockets of my pack. The constant scraping against rocks has worn holes on those, dang! I knew it was inevitable on this trail and should have premtively reinforced those. 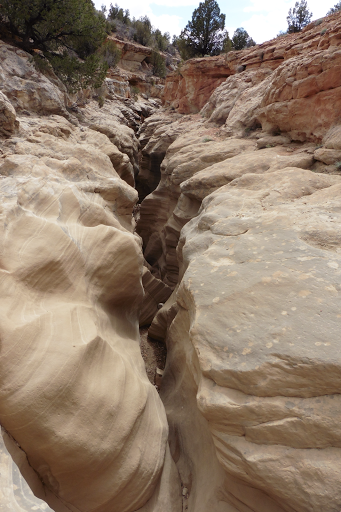 It was a fairly short Narrows of a few miles, but it was great! We took tons of photos and they really are surreal to be in. Here are the highlights and all the photos will be in my slideshow in another week or so from this section. 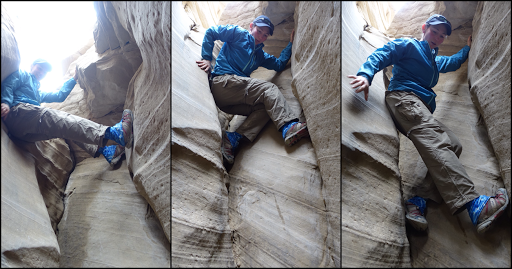 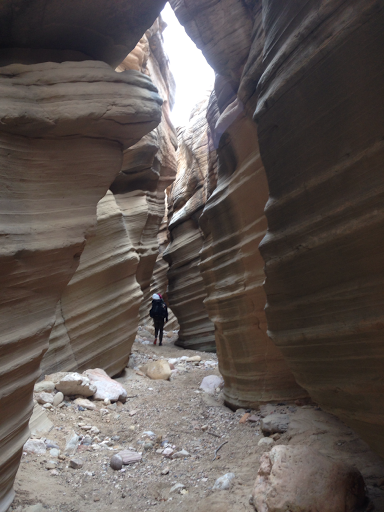 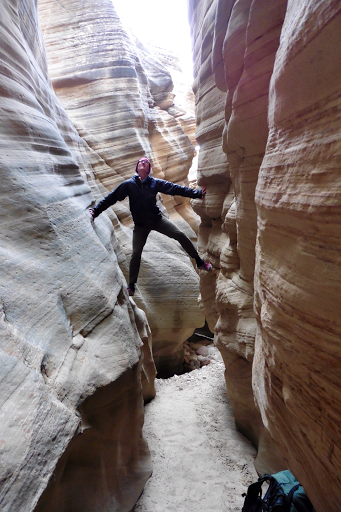 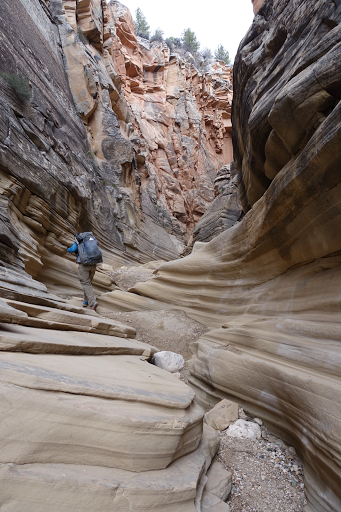 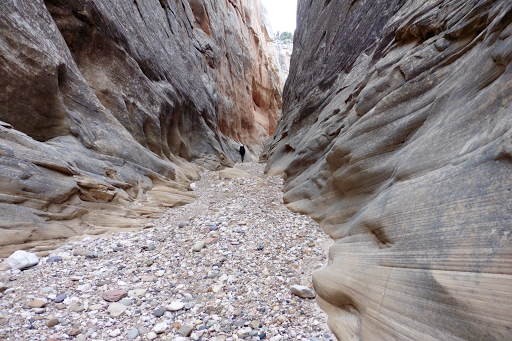 After the Narrows, the canyon opened up to deeper sand walking and my body realized how tired it was. I started my period and it just knocks me down a few pegs. I learned of Naproxin last summer to manage the pain, but the outright exhaustion can’t be avoided. I was having difficulty even keeping my eyes open the last hour of the day. We had trouble finding a spot that was, sheltered, flat, and on dry ground. We are guessing it is from either rain or condensation…and we are hoping it isn’t from condensation. We don’t want to have to wake up to wet tents again…it’s chilly, but much less cold than last night. I’m in my odd state of being overheated and clammy, but chilled like I tend to be during this time for a couple days. I chose the sand with limited options and Katherine is up off the sand on a small dirt hill next to me. It isn’t flat, but she is hoping it will be drier. It was quite a great day, and I’m going to hopefully sleep hard. 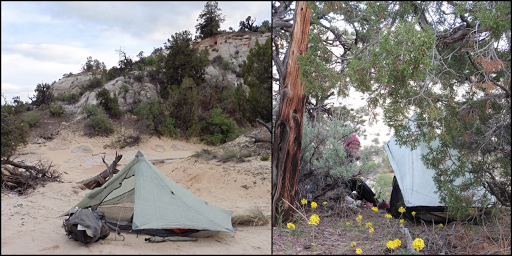