April 19th
Paria River, 1mi S of Snake Creek(431.8)-Just before Cannonville(457)
25.2mi
I was up and out by 7am. There was a chill in the air and I sadly had to put on my cold soaking wet shoes and immediately step back into the countless crossings of the Paria River. I had 10 more miles of the Paria and it was much like yesterday, but a bit better. It curved more and I was able to get on some tracks on land every so often, so that was more enjoyable. 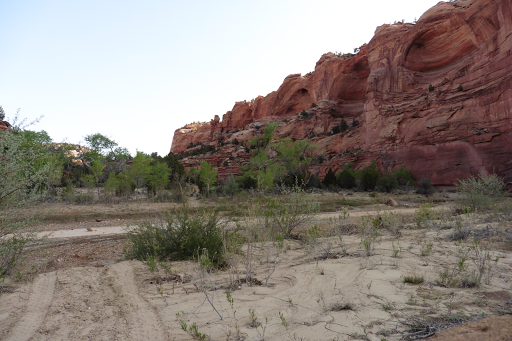 My feet were numb from the crossings, so I welcomed the break, even if it was in deep sand. There was still plenty of that clay mud that suctioned your shoes to the ground too. Fortunately, it seemed to go by quickly  and I was done with those 10mi by 11am. 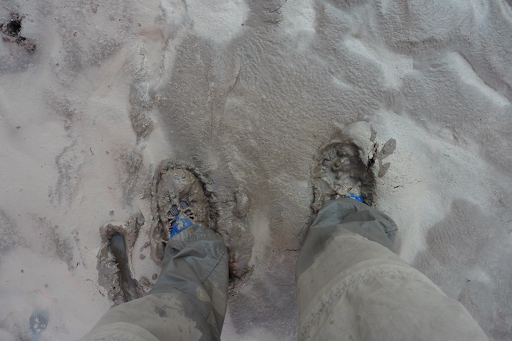 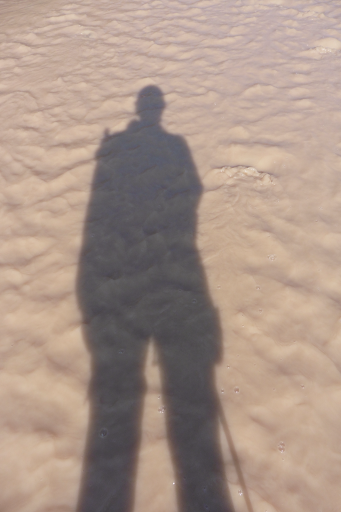 From there, I forked off to do the Bull Valley Gorge alternate. It added about 6mi, but it seemed worth it with some narrows to see. I had the whole thing to myself and was surprised not to see anyone else since it’s a Sunday. The gorge and narrows were nice although I’m not sure I’d say it’s worth adding 6mi onto an already long leg (145mi including the alternate) just one day before town. 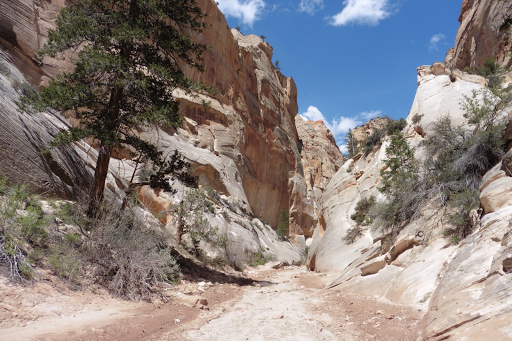 It didn’t have anything beyond the other narrows we’ve seen and just 2mi of it has narrows. The rest of it is more of a wash. However, it is a popular hike and you may as well do it while you’re here is my opinion. It was unique to be in there alone as it echoed easily as my poles clacked. Some of it was quite narrow too. 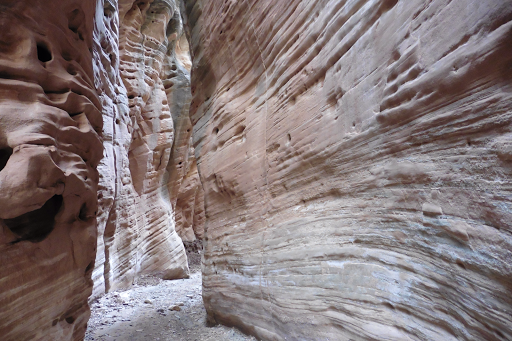 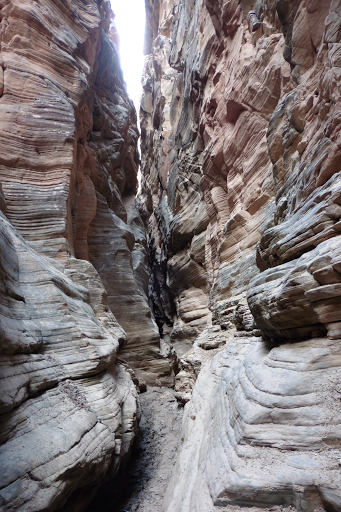 At one point, there were mounds of mud that seemed out of place along the walls. Then it felt like I’d entered a refrigerator. Then I realized the mounds weren’t mud, but mud covered snow that had yet to melt. That was a surprise! 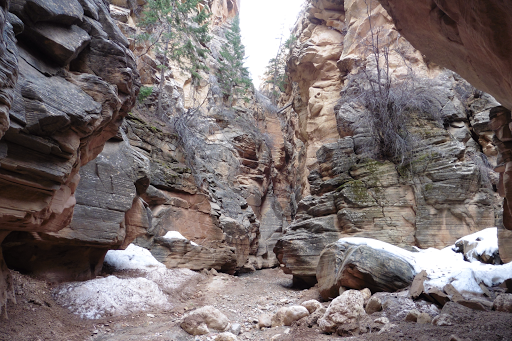 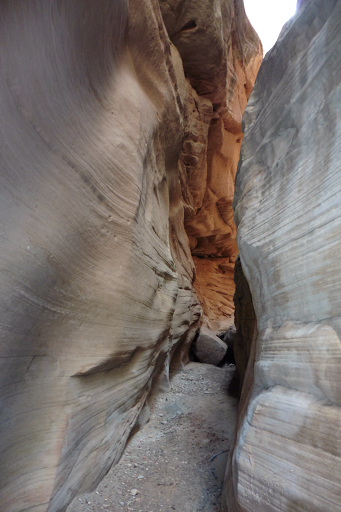 Bull Valley isn’t a stroll all the way. In the narrows, there were many obstacles that needed tackling. Many boulders to climb around. The most precarious ones for me had bare branches leaning against them to assist or even scale like a smooth and possibly unstable ladder. All made more interesting by the added weight and imbalance of the pack. 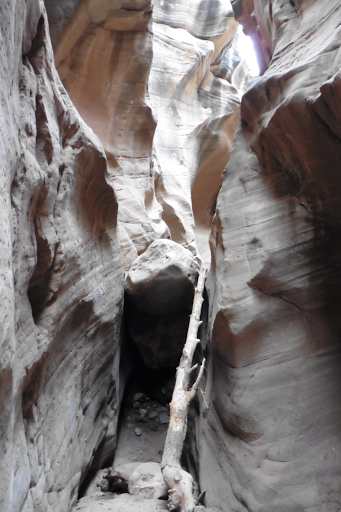 After Bull Valley Gorge, it was a short road walk to another popular day hike, Willis Creek Narrows. It was fun to do two such different narrows so close together. Willis Creek had many day hikers. It is a 2.3mi out-and-back hike for most, but not for me since the end of it connected with Sheep Creek, which I took 2mi to a dirt road. It is just fun sometimes how all these can be connected and it must have been fun for the trail creators to piece all this great stuff together into one continuous hike. 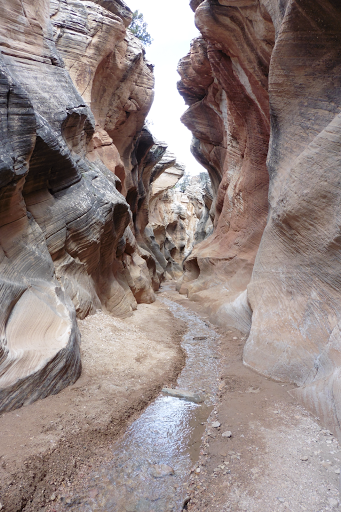 I’m now on a road for about 10mi to my next town of Tropic. I did the 3mi of dirt road walking and had fun seeing the same people I saw in the canyon drive by and some even stopped to chat. The view as I hiked was great! Apparently, I’m back in the Grand Staircase-Escalante National Park. An info board gave background on the name. It refers to the layers of rock and their colors that make them seem like different colored steps or levels, which they sort of are since each represents a time period from long ago. The clouds had gathered all day and it was a great view to have. 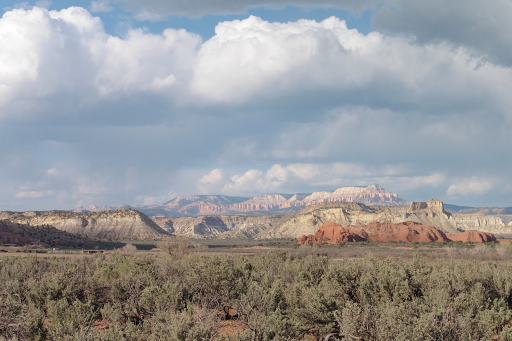 I did get time to also watch the final episode of Transparent’s first season. It is a good series and it’s cool that it’s been recognized by the major awards ceremonies given that it’s an original series from Netflix and not on broadcast television. My next series is probably going to be House of Cards, also from Netflix. I’ve yet to see any of it and it has already had 3 seasons, so I have some catching up to do. Good thing there’s plenty of road walking in and out of Tropic!
The miles flew by today and I stopped at 6:30pm having done 25mi. My body is sooo ready for a nero tomorrow with just 7mi to Tropic. Oddly enough, I’m just two miles from the tiny downtown of Cannonville, which I’ll walk right through and possibly eat breakfast. I could have hiked on and pushed a bit faster to stay there tonight at the KOA, but I don’t need to pay for something I can do happily for free without tons of others around. Plus, I have tons of extra food (finishing this leg two days earlier than expected) and don’t want to be tempted to buy from a restaurant. I had to stealth camp off the road and seem to be in a somewhat legal spot. I didn’t cross any barbed wire to get here and seem to be on the correct side of the no trespassing sign…if there is a correct side…I’m well hidden and will be out early, so no one should notice. 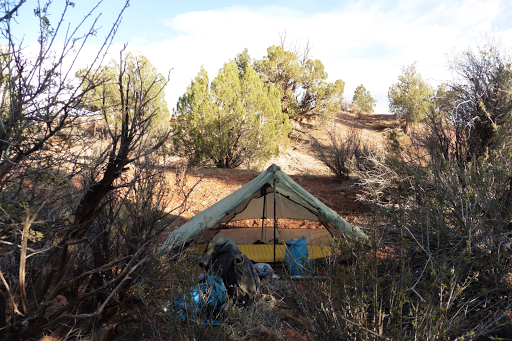 That’s about it for my second solo day on the Hayduke. The miles went by so easily, it will be possible that Katherine will make it into Tropic tomorrow too. Then we will reassess what will happen with the next leg. We are now on the Bryce Canyon Extention, which adds some of the awesomeness of Bryce to the route. Really excited about the next leg and finally seeing Bryce!