April 21st
Tropic,UT(463.7)-off Under the Rim
Tr(481.6)
17.9mi
Gavin and I got a nice relaxed start after the commentary hot breakfast from our hotel. I totally recommend America’s Best Value Inn for staying in Tropic. Restaurant with good prices
and grocery store right next door along with laundry in the building and good wifi. Most convenient stop so far in my opinion. We set off just after 9am down the road and in conversation with full bellies. We walked at least 10mins before realizing we absentmindedly were walking down the wrong road. Way to go team! Once on the right road and paying better attention, we ended up doing less road walking than anticipated. It was just a mile of paved walking, two miles of dirt road, and then a trail into Bryce Canyon National Park. The first thing we hit was Sunrise Point, which had a nice overlook viewpoint of the park. 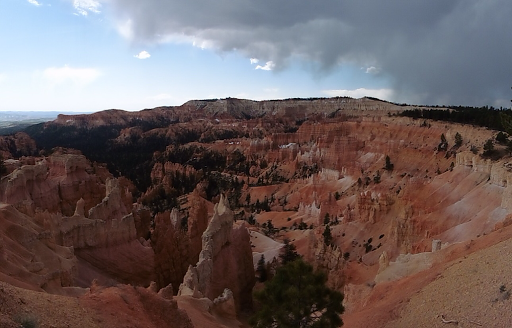 There is a 20-30% chance of showers and thunderstorms much of this week and this area is known for unpredictable and random colder weather. I’ll be happy once we get through this leg with the spectrum of weather around here. At night, it should be pretty cold too. Right when we got to the top of Sunrise Point, the dark looming cloud released the snow. It wasn’t that cold just a bit before and I was even wearing shorts, ha! The clouds hung out on and off all day and it was not bad after the short snow spell with temps going from cool to hot depending on the sun. There is a loop  through the main section of Bryce and we were at the top. We had to choose just one side of the loop since our path through exited at the bottom of the loop. It was either the rim (2.7mi) staying high or the lower and slightly longer trail (3.4mi that was noted as the most popular part of Bryce. We chose the longer more popular route. It was nice, wound a lot, and had a lot of ups and downs. Bryce just has a unique look with formations you’d expect to see in a cave, but outside in a much grander scale. It’s not easy to photograph with the colors and lighting. 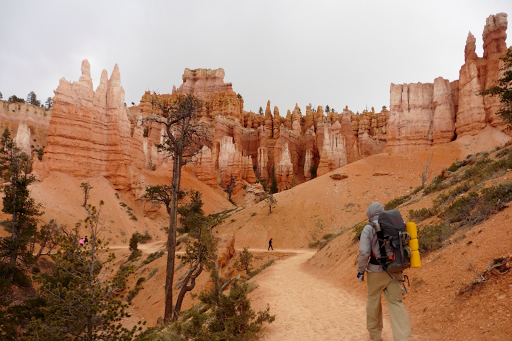 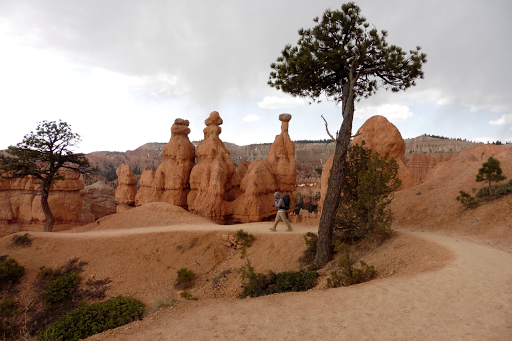 It was a Tuesday, but there were tons of tourists and that did take away from the experience a bit. It felt a bit artificial after what we’ve done with the groomed trail and seemingly perfectly placed sites along the trail. Don’t get me wrong, it was a unique and wonderful place to see, but that was reaction both myself and Gavin had to being there. 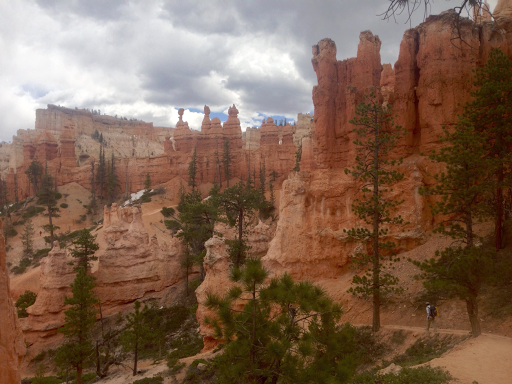 Towards the end, we were getting water when Katherine walked up. She had an alternate approach that had her approaching from the south end of the loop and then doing the whole loop, so we knew chances were that we’d overlap. She liked the rim trail and recommends the full loop, though it does require an approach of 3.4mi with a steady climb that you then have to do again downhill after doing the loop. One advantage being that she was able to stash her pack in the woods and do the 13 miles sans pack. We overlapped for 15mins or so before Gavin and I stopped for lunch at Bryce Point Overlook and Katherine hiked on to her pack. 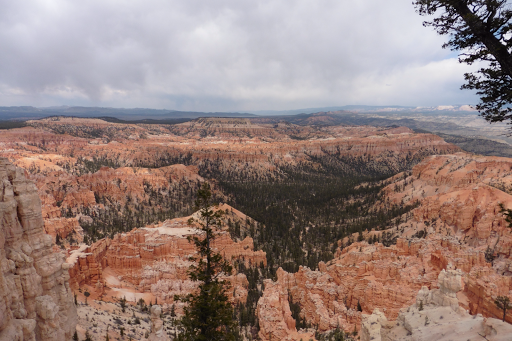 After lunch, I noticed I somehow left two things in town…yes TWO freakin’ things! One is my hand sanitizer, which I must have somehow accidentally thrown out in last leg’s toiletry bag, dang! The second thing I left is a classic and really terrible to lose…the MAPS for this section!!! Not just the maps, but all the data in the bag with them that includes the water chart, trail notes, guidebook info, etc. I had them at breakfast this morning with Gavin to go over everything and must have left them on the seat of the booth, aaarrgh! I always keep the current map(s) in my pocket and used it all day, so didn’t even notice til after lunch. Good news is that I expect this of myself and have all the essential info and maps as PDFs on my phone….so glad it’s only 2.5 more days and a short leg.
The rest of the day was spent on the Under the Rim trail, which I really enjoyed! It was gradual with wooded hiking mixed in with great views along traverses. 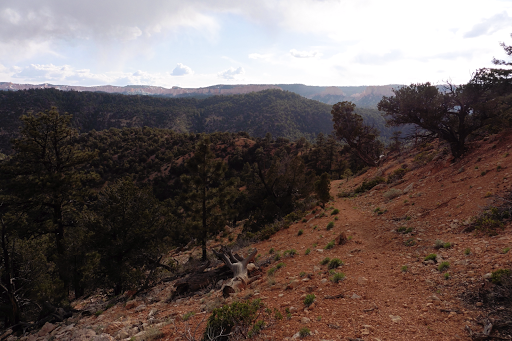 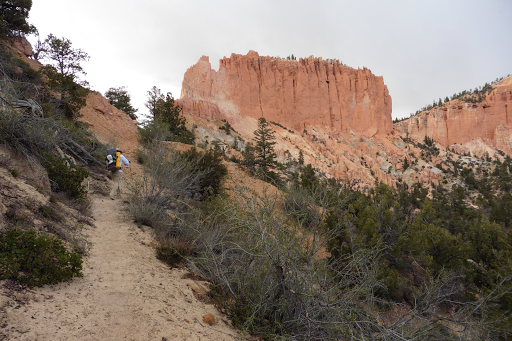 It was the smoothest trail we’ve been on for the longest period of time since we started…but technically isn’t part of the official Hayduke, so it totally makes sense that it’s such a different feel. I felt like I was on the PCT again and loved it! It sprinkled on and off, but just light drops. 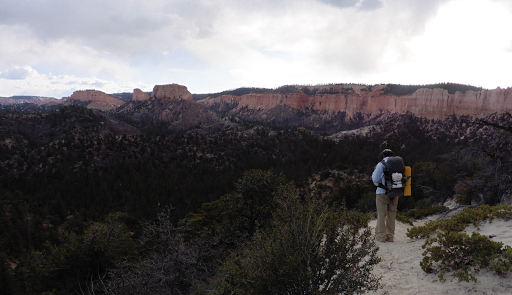 We hiked til 7pm given our later start and are in a nice protected area of winds or weather picks up. We can already hear gusts of wind, but are not feeling anything, so that’s nice. We are relatively high around 7,000ft and had a high point just over 8,000ft, so the colder temps are understandable. It’s quite cold right now and should be in the 30s tonight. Gavin’s green tent is in the brush to the right of mine. 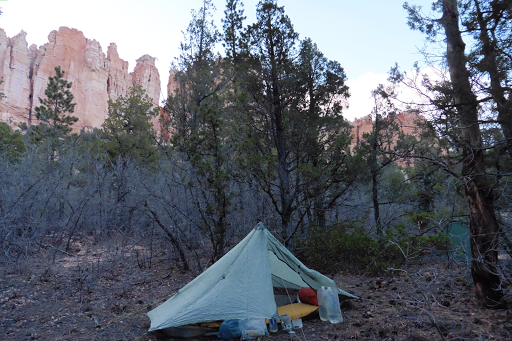 We are set up for two and a half more days of relaxed hiking to then hitch to Kanab. What a treat to get a four day leg on the Hayduke! Katherine is a couple miles ahead most likely (it’s easy to see footprints out on the Hayduke) and we’ll probably keep it that way to make sure she gets that solo time without the interruptions of us leap frogging multiple times a day if we can help it. We’ll touch base in town. Great first day in Bryce!