April 27th
Wire Pass Trailhead(543)-Top of Middle Exit(550.5)
7.5mi+4mi side trip=11.5mi
Since today is a very short day to legally camp and setup for a long day tomorrow, I slept in this morning. A reminder that these next four days are not on the Hayduke and we are adding in an extra loop of about 50mi to see some great stuff in Buckskin Gulch and the Paria River. I got started an hour later than usual at 7:30am. My hope was to stay up last night and watch some of House of Cards, but I was tired and slept pretty hard. I guess I needed it. I was groggy as I set off. In order to camp legally last night and still do the loop we want to do, I had to backtrack a mile on the Hayduke and then fork off  into Buckskin Gulch to the part that has cool narrows. It is said to be possibly the longest slot canyon in the world and the narrows we are doing are 13mi long. Gavin went on a side trip, so he hiked later last night and earlier this morning and met back up with me at the start of the narrows this morning. The narrows were great and we took tons of photos. It was a relaxed day, so it was nice just to mosey and take it all in. I’ll explain later about my photos, but most these photos(except a few from my iPhone) were taken on Gavin’s camera and I took iPhone photos of them for this post. Someday, I’ll replace them with the real photo. 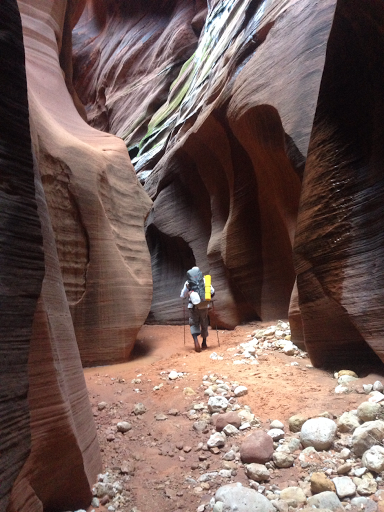 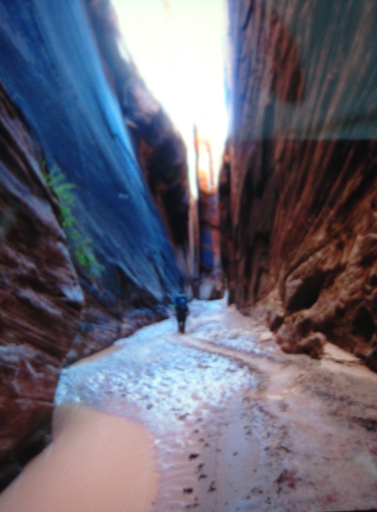 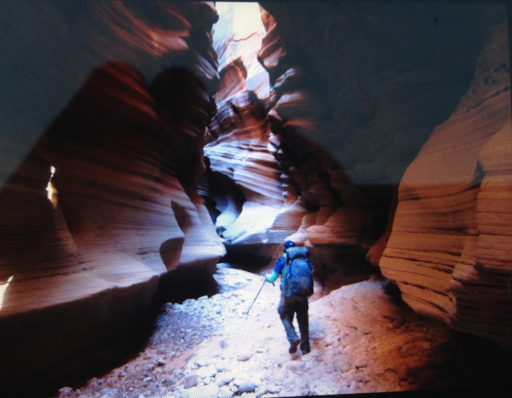 We only had to go 6mi down Buckskin before climbing out to the planned camping area. There was a lot of rain recently, so we expected some water and definitely got it. There were stretches up to about 30yds with COLD water we had to wade through. Most of the wading came in miles 5 & 6, so I hadn’t put on my neoprene socks and wouldn’t figuring we were almost done for the day. It was sooo cold and I regretted the decision to not put the socks on. Our feet were blocks of ice and the last mile seemed to take and eternity with all the wading. There were many times that the water came up to my butt and it was slow going. The water was so murky that we couldn’t see where we were stepping and we had to slowly feel for each step or drop off. It’s hours later and I feel like I can still feel it in the joints of my feet. Still totally worth it with how cool it was in there. 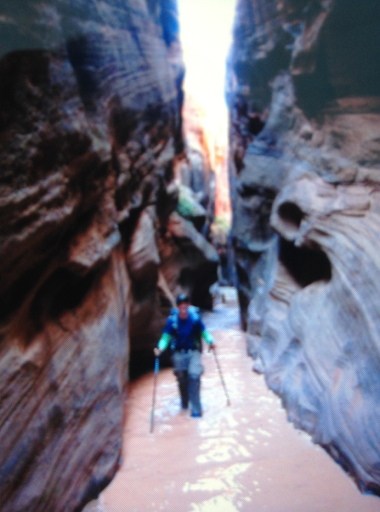 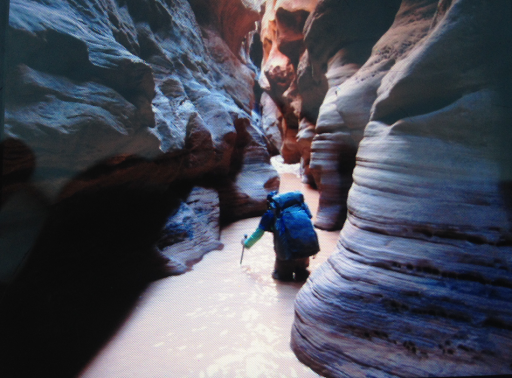 At about mile six, we exited out of the canyon to camp legally without a permit. It is a spot called Middle Exit with a scramble up out of the canyon. The first challenge was finding it and it wasn’t too difficult after reading about what to look for. There are few open spaces for even sunlight and even fewer of those spaces seem like anything you’d want to climb, so it stood out. The final clue is that there is a petroglyph of two goats where the climb starts. They are just above my hand. 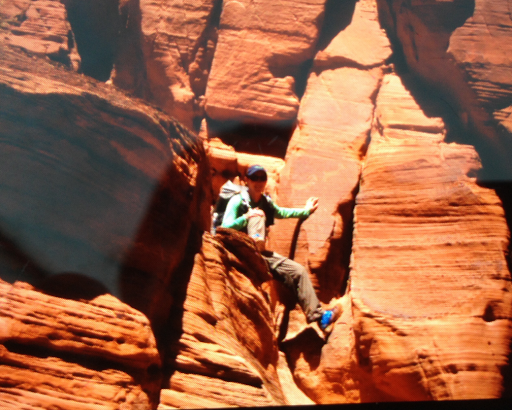 The climb up was not something everyone would be comfortable with and I was surprised at how well I handled it with a pack on. We have to climb back down it tomorrow morning and I will get better photos of the exposure. I had great ones today, but again will explain why I can’t post them. There was a crack to climb up a bit and some ledges that are probably easier. Then some slanted traversing to do on sandstone that had sand all over it, so not my favorite thing at all! This was the tame part. 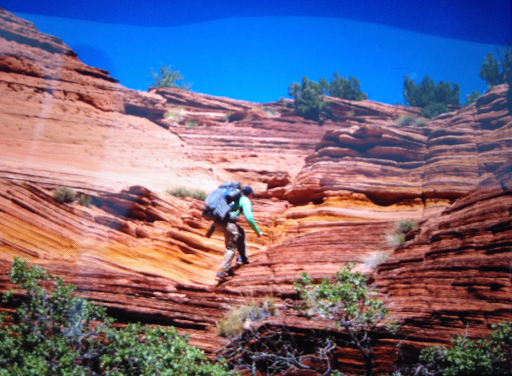 Once on top, we stopped for a well earned lunch in the lone spot of shade in the very sandy and exposed area. While sitting there, Katherine arrived (also having done some side exploring this morning) and also had some lunch. We all felt like it had already been a full day and it was only about 2pm. We had the rest of the day and knew there was a side trip to see Cobra Arch up top, so Gavin and I headed off to do that without our packs. It was quite a treat to go without packs just carrying a snack, GPS, camera, and phone in my pockets and carrying some water. The arch was said to be just 1.5mi away cross country, but was at least two and took us over and hour in deep sand and pretty hot sunlight. When we got there, a nice couple from Denmark was there having come from a trailhead on the other side. They took our picture at the arch and that’s when I noticed I didn’t have my camera! Seriously!?!? I tried to remember if I even brought it with me and looked around the arch to make sure. We got a picture at Cobra Arch with my iPhone and then did our best to follow our exact tracks back. 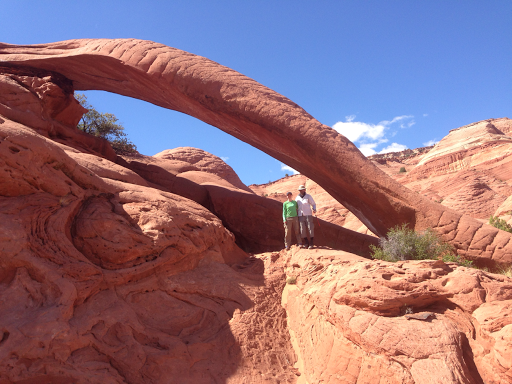 The deep sand made following the tracks difficult because it just left depressions and few actual prints with many others having hiked around that same area. It was really nice out and we saw Katherine headed to the arch on the way back. 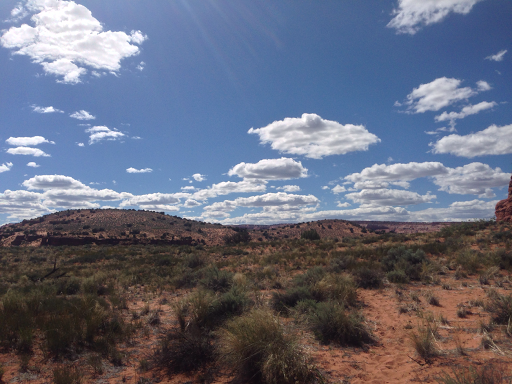 I was not sure I even brought my camera, so the fully worry hadn’t kicked in until the end when I realized I had taken one photo right after lunch in the first few minutes. Gavin’s GPS had the track we had walked and I went back once we returned to camp to really check where I took my last photo and might have dropped it. Nothing…just terrible. It made me sad, but more angry at myself than anything else. There are many silver linings here…the camera was sorta broken anyway. I just loaded all photos onto my computer in Kanab, so the only photos lost were today’s since yesterday’s got transferred to my phone for blogging. Gavin took many photos today, so I do have some photographic keepsakes that even have me in them! The bummer is that I took some great photos today and really enjoyed what we did. Also, of course paying for another camera just kills me, but it isn’t the end of the world. I’m really just mad at myself more than anything. Katherine was nice enough to capture some of my frustration in photos. She’s seen this many times from me this hike. 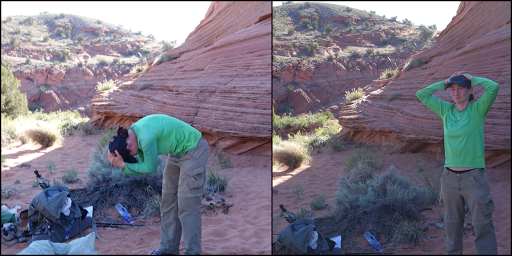 We all set up camp together and will get up pretty early tomorrow. It’s a 25mi day in the Buckskin Gulch and then hiking in the Paria River again. The 25mi will get us to another legal camping spot, but if we don’t make it, it will be ok and we will know we tried to make it. It’s gonna be a good challenge. 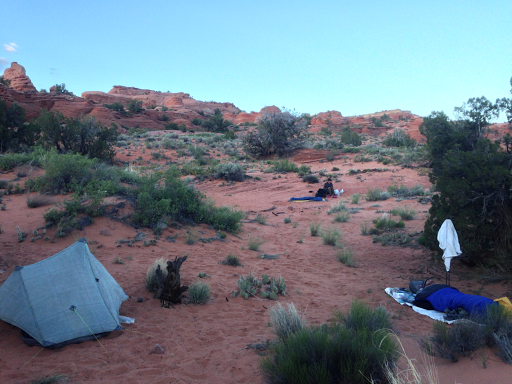 What gets me about the camera is missing out on good photos of the Grand Canyon next leg. I don’t have phone service, so I couldn’t call my sister to order a new camera. Then I realized I have a Delorme InReach that I use each night to check-in. I can text my sister through it when needed and remembered I could do that! It even has an app on my phone that made the messaging just like I was texting on my phone. It worked great and I will have a new camera waiting for me in Kanab at the end of this leg. Two thumbs up for the Delorme InReach!!! So, all in all, not a horrible thing and it could have been a lot worse. I do think I’ve set a record even for myself in things lost on one trail and it has only been just over a month! Clean slate tomorrow and looking forward to the sights and challenge of tomorrow’s big day.