April 29th
Tank on Vermilion Cliffs(576.7)-Bottom of Crack Route off Vermilion Cliffs(603.2)
26.5(felt a lot shorter?)
Gavin and I got going by 6:30am, Katherine left about 30mins ahead of us. We knew we had a day of deep sandy road walking set for the day across an area called the Sand Hills…not a good combination. The price to be paid for all the greatness the last few days. Well worth it though. To give a visual of what we’re doing, Gavin gave a good example that it’s like we’re on a big birthday cake. We had that 1800ft straight up climb last night and now we are hiking across the top today to an 1800ft descent pretty much straight down. This whole section is a Nic Barth alternate and he said the mileage across the top before the descent is 25mi. We were expecting quite a slog of 25mi in heat and sand. 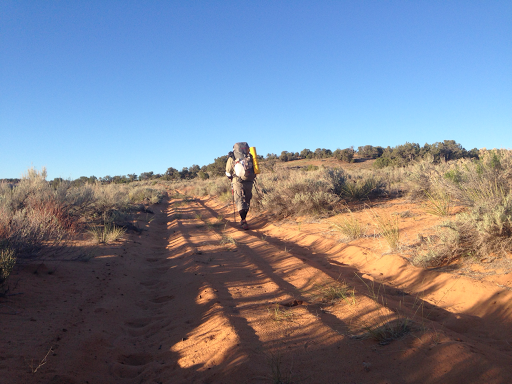 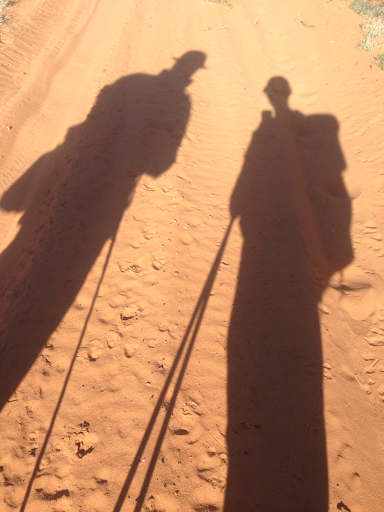 By mid morning, we hit our last water source for 24hrs. A ranch with another swampy kind of depression, but this one was much better than the one last night. There was a climb up just after and I got a photo from up above. 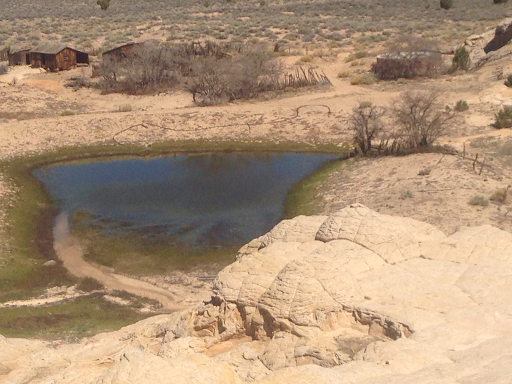 On that brief climb up, it went up some white sandstone that was unique from anything I’ve ever seen before. Really cool. 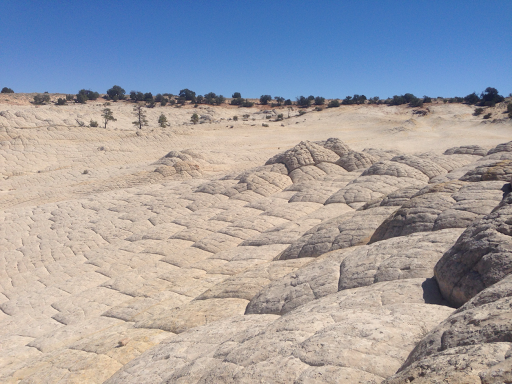 After grabbing the water in the mid morning, Gavin and I decided to split up for the day. We have different routines and ways of breaking during the day, so we figured we’d meet at the top of the down climb and camp up high to descend down tomorrow. We didn’t imagine that we’d make it through the 25mi sand slog early enough to do the down climb tonight. I cruised for the day listening to my MP3 player, which I haven’t done most of this trail. There is just too much technical stuff and navigation to cruise mindlessly like today. 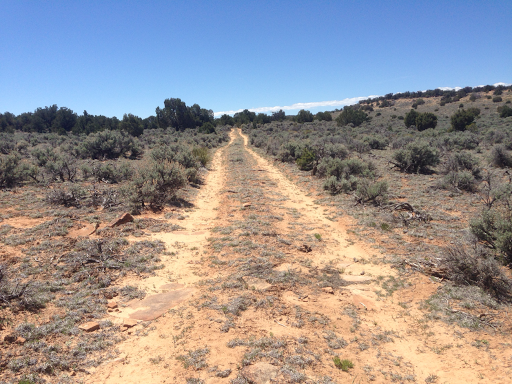 There were a few sections of cross country and even some fun spots to cross country when the road wound and it was easy to cut the turn. All in all, it didn’t feel at all like a 25mi day. At one point I noticed that Katherine’s footprints were no longer on the road and figured I must have passed her on her lunch break while I was enjoying my mindless hiking and music. I stopped for lunch at a spot where I got reception and was able to make some phone calls and Katherine walked by while I was on that break. Soon after that, I was going cross country when I randomly looked over to see Gavin about 20yds away. It was so random! It was great that we had intersected since we both were now on time to make the down climb tonight and get it out of the way. Just before the climb down, we came upon Katherine and took a break for a bit so she wouldn’t have us right behind her with loose rock and scree. The climb down the Vermilion Cliffs was pretty darn cool! Just like last night, it was 1800ft and no trail with a lot of loose rock and cacti. Looking in the distance, we could see part of the Grand Canyon, where out next couple weeks will be spent, and that was really surreal! 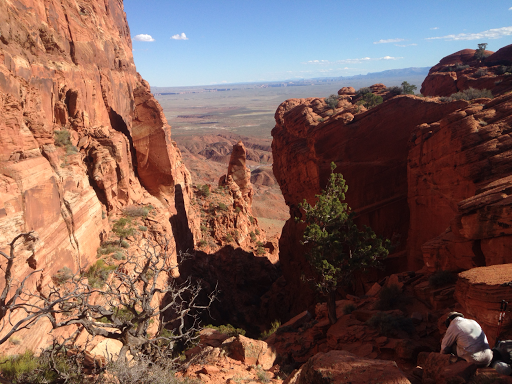 Here are side by side views of the climb from the top and from the first section down. It took us over an hour, but wasn’t too technical. Just lots of footing to pay attention to. On the left, Gavin in near the top on his way down. I had climbed down ahead of him while he changed out his socks and looked up to see he was still at the top…turns out that poor Gavin had a rock slip out from under him on his first step down and put his hand n a prickly pear cactus. He reacted by removing his hand by reflex and then sitting on a prickly pear. He had to stand up there and try to remove broken needles embedded in his hand and butt. Not a great way to start such a descent! 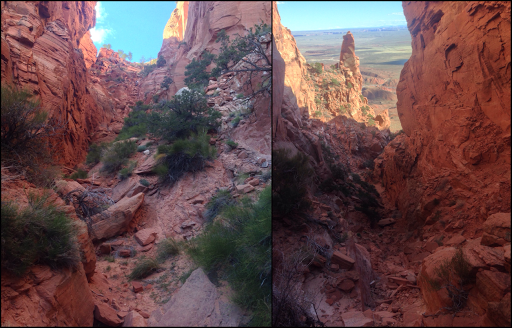 Loved the view! We camped down on the right hand side in those hills below. I just couldn’t get enough photos of this down climb. 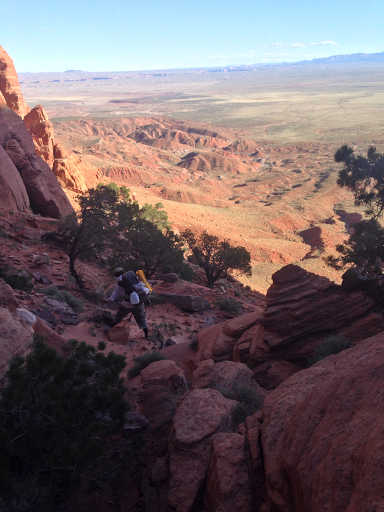 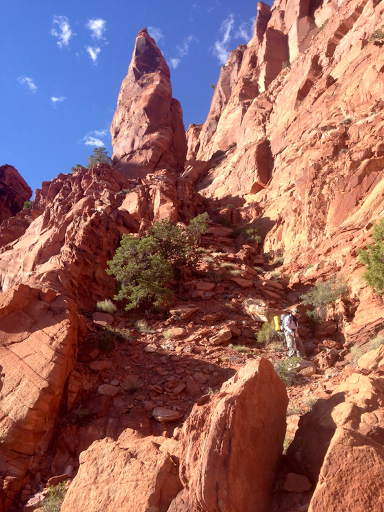 We made it to camp just after 7pm, later than what I usually like, but it was one of the best campsites all trail! We camped right here with a full view of the Vermilion Cliffs and the crack that we hiked down. Just unbelievable! 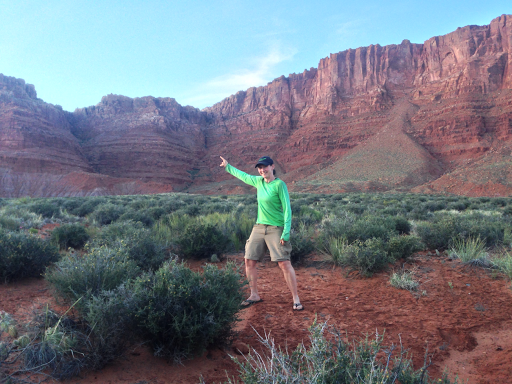 And sunset wasn’t too shabby either. The maps say we did over 26mi, but it had to have been less…still, we’ll take it. Poor Gavin is still trying to get prickly pear needles out of his butt as he tries to nestle in for the night. Just about 8mi and we’re back in Kanab tomorrow! 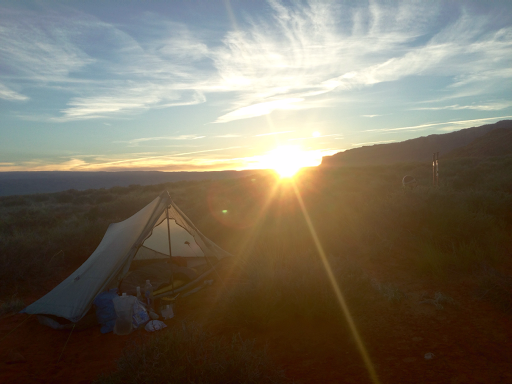