May 3rd
Crane Lake(634.7)-FS610, 2mi before Nankoweap Trailhead(656.1)
21.4mi
Since we didn’t have to do many miles today and we both felt spent last night, we decided to sleep in. We got going at 7:20am, which is a good 40-50mins later than the usual start time. We were still not feeling 100%, but definitely better than yesterday’s exhaustion. We walked leisurely all morning and somehow the miles were coming quickly. We even stopped early to get water we didn’t need because it looked better than the previous source we already had. Most water sources through this section are from little ponds or lakes. They look worse than they are and we are just thankful to not have to worry about long water carries with all the weight we have in food. 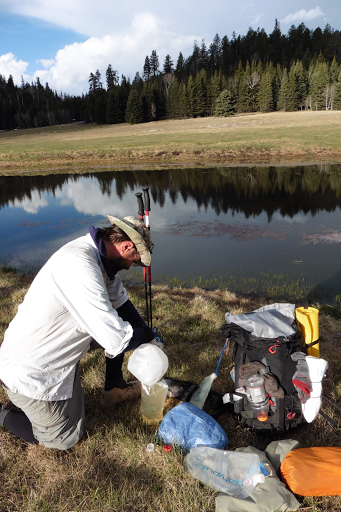 It was perplexing for sure that the miles were coming so quickly since we had planned mileage for the opposite. We were under the impression that the Hayduke miles were understated (more than usual) along the Arizona Trail. Our schedule was also developed conservatively with much hotter temperatures in mind. When we started hiking today, it was only 36F, near freezing and nowhere near what we expected for late spring heading into the Grand Canyon. It stayed in the 50s and 60s most of the day. Not the 80-90F that are common. One fair point to make is that we are quite high right now (consistently near 8,600ft) and it can be colder. Tomorrow, we drop to 3,500ft and it will get significantly warmer, but still not the intense and unbearable Grand Canyon heat we’ve been warned of. The result of this is that, despite our efforts to relax and slow down, we are well ahead of schedule. Normally, this would be celebrated and wouldn’t be a concern, but we have a two week schedule of specific permitted camping in the Grand Canyon to adhere to…or possibly not…
We were on the Arizona Trail for most of the day today and it was more of the nice wooded trail with pine needles and pine cones along the trail. I was excited to see stretches with aspens too. There were many stretches through nice valleys that were really enjoyable. The clouds gathered all morning. There is a chance of showers and thunderstorms much of this leg. 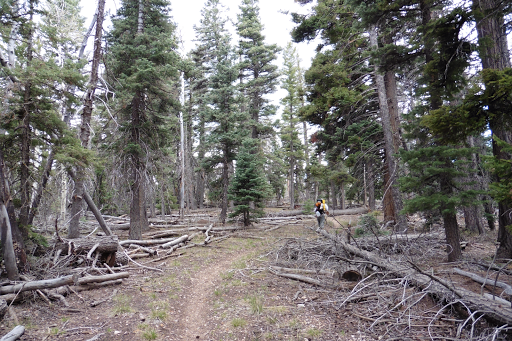 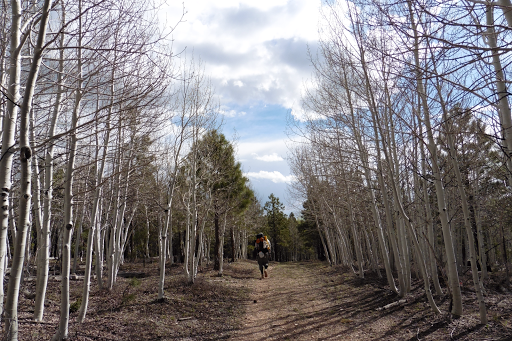 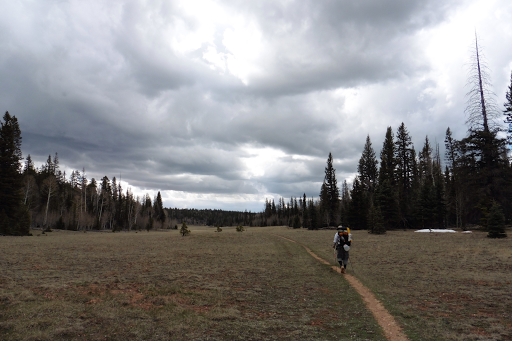 Since we are trying to stay relaxed and on our permit schedule, we stopped early for lunch (11am) to also encourage an early camp time. As we were eating, thunder rolled and echoed around us. It was very isolated and seemed that we were just barely going to dodge it. Soon after lunch, we got to a very nice viewpoint called East Rim and could see the rain coming down in the near distance. 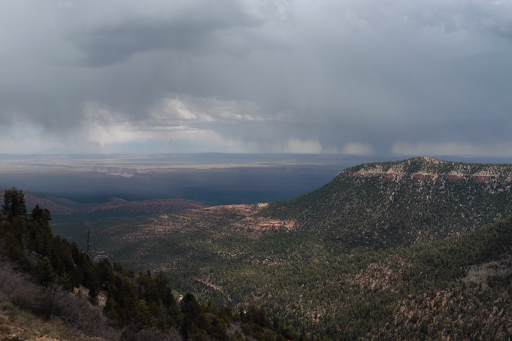 We hiked a bit further to a boxed spring water source where we planned to tank up for the next 24hrs. Right when we got there, the temps dropped and it started to hail lightly. Then the rain came. It was only a light rain, but looked like it wasn’t going to stop anytime soon, so we decided to wait it out in Gavin’s rain shell of a tent. It was only 1:20 and we were just a few miles from our goal for the day…we had time to spare. The tent was perfect! It got pretty cold out, so hiking in the rain wouldn’t have been enjoyable at all. While we waited, I used my umbrella to and Gavin’s gallon jug to get water out of the spring so we could portion it into our bladders while we waited. I made four runs to the spring and back and Gavin we very happy to stay warm and dry. He took photos from inside the tent. 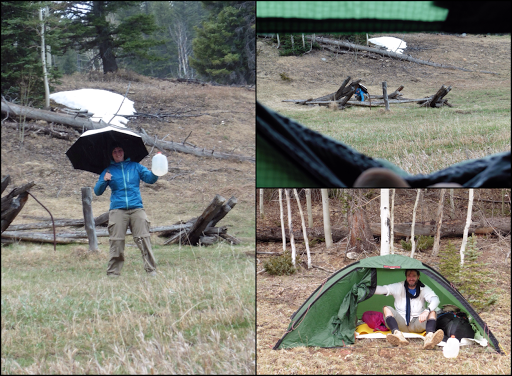 The rain was over in less than 1.5hrs, so it was 3pm and we only needed to hike an hour to meet our goal for the day…and that’s having slept in, done an early lunch, and spent 1.5hrs waiting out the rain. The hikers whose trail journals we’d based our mileages off of struggled to make these miles and we keep bracing for whatever it is that will slow us down…and it never came today. We think it has to be that we have such cool weather. It affects everything from our energy, to water sources, to pack weight. We are really fortunate.
On a side note, I’ve had more time this leg to listen to music and audiobooks. I started The Rosie Project, which was recommended by many and it is nice easy listening. I’m not addicted to it, but I could definitely see it as a cute movie and wouldn’t be surprised if that was in the works.
We reassessed our plan when we made our miles for the day and it was so early. This positions us well for entering the Grand Canyon and timing all the obstacles to come like heat, water, timing certain sections, and hitching a ride across the Colorado River. There are many factors to consider and pros and cons for every scenario. In the end, we decided to just keep hiking and accept that we’d be off permit. It’s a risk, but we would hope that a ranger would understand the predicament that it’s difficult to plan exact mileages with so many variables on a 9 day leg. Today ended with a road walk for many miles along the park boundary. The road was quite muddy up top and we figured it was what we were looking at earlier from our East Rim viewpoint. The new goal was to get 2mi further, but at 6pm, it started to rain lightly and we decided to play it safe and quit while we were ahead. The trail is just below 9,000ft and there is a lot of lingering snow on the ground. It made finding camping a bit more challenging, but we found dry spots sheltered from the gusts swirling above. 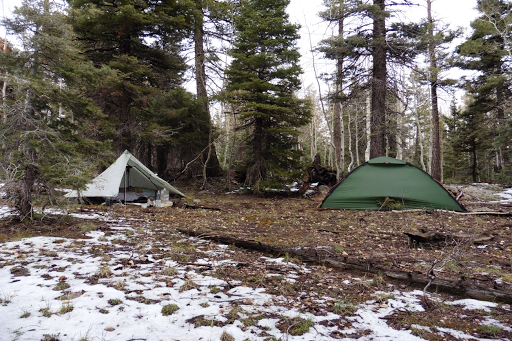 The rain stopped and it is already below 40F. Gonna be a cold one! Remember just yesterday I posted photos of my heat rash!? This area is all over the place! The rash is still there oddly, but improving. Tomorrow, we officially drop into the Grand Canyon to 3,500ft and it should be at least 25F warmer than its been up here. Such a spectrum of weather in such a short period of time. What a crazy trail!