May 5th
Colorado River @ Kwagunt Rapids(671.8)-Colorado River @ Lava Canyon Rapids(683.8)
12mi
Alternate Title: The Full Experience
The night on the beach was pretty darn perfect. It stayed mild all night with a cool breeze. I kept my tent doors open to let the breeze though and see outside. The moon lit up the canyon walls much of the the night and it was a great sight. It rained lightly at one point for a short period. Still surreal to me that I’m hiking through and camping in the Grand Canyon.
The reality of this place sure hit home this morning. We had 4.8mi of bushwhacking along the shore of the Colorado to get to our hitch point to cross over to the south side of the river. The Horsethief alternate that we did yesterday thankfully had us avoid the first four miles of bushwhacking. It was really slow going and possibly the most frustrating part of the whole trail for me. I knew it would be slow going and had heard about it from other Haydukers. I hoped it wouldn’t be too bad, but it was pretty annoying. Fortunately, we had perfect conditions with shade and a cool breeze most of the morning. I just can’t believe this amazing weather luck! To get and idea of how tediously slow it was, it took 4hrs 20mins to get those 4.8mi done. I can usually do 10-12mi in that time. It wasn’t just that it was slow, it was that the terrain was a double punch of what I really have difficulty with. It was brushy at times, so that worked my claustrophobic nerve. There was a lot of angled hiking on large uneven rocks and boulders. Something that can’t be depicted to its full extent in a photo. 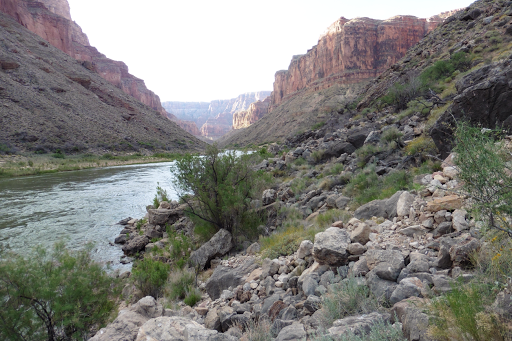 I can scramble and do rocky or scree-like terrain, but small boulder hopping over unstable rocks that appear stable for a long period of time really freaks me out. I had major ankle surgery years ago after I randomly rolled an ankle walking off a bus. Once you have an ankle completely go out on you and pretty much snap, you never really recover mentally. It’s a small shot of fear that it will happen again with each step when I’m on terrain like what I was on this morning. I took my first real fall of the trip today on those rocks when I didn’t get a good footing on the tip of a rock and I fell forward, luckily rolling mid fall so that I landed backwards on my pack. Nothing got scraped or hit, but it was frightening and I came close to having my head hit a rock. I was on edge and shaky the rest of the morning and I just wanted it to end as soon as possible. The good news is that in the last mile, we did get some stretches along rock shelves that were more level and not brushy. Those were great! 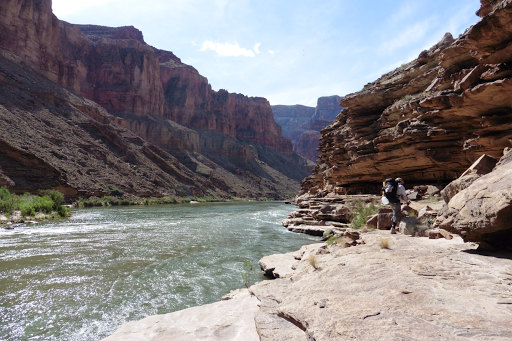 We got to the hitching point at 11:20am and waited for a raft to come by just like road hitching. The timing is interesting as it’s recommended to get to hitching points well before the afternoon. We saw a good number of personal and commercial rafts go by while we were hiking around 9am Arizona time (10am for us). Then it was kinda dead for an hour or two. The spot where people wait for hitches is a small beach area with nice rock ledges that thankfully provided a shady place to wait and have lunch. 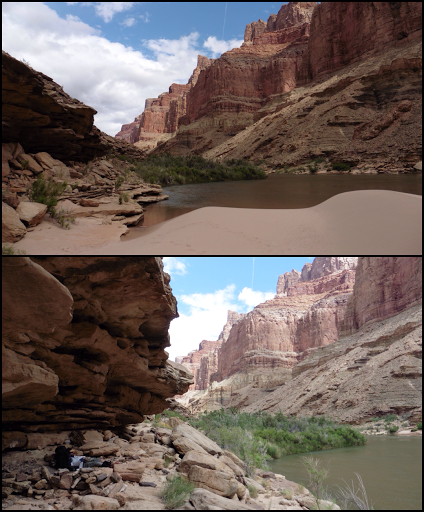 We got a hitch after waiting 1hr 20mins from the first group that came by once we got there. They were with a group of rafters on day 5 of a 21 day rafting trip along the Colorado. Thru-rafters, ha! It was fun to get a ride across. Notice Gavin is wearing his sunglasses here. After the hitch, he somehow lost his sunglasses probably when we took some time to reorganize our packs after reaching the other side. That’s a bummer. I feel like I’m contagious with all he’s lost/broken this leg! 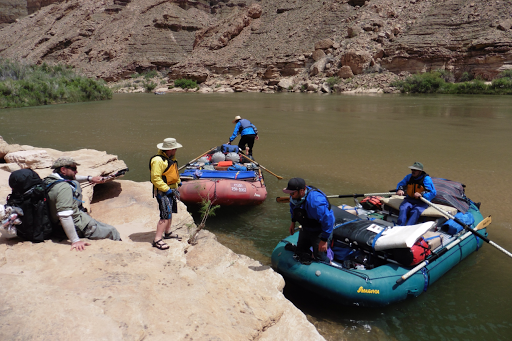 There was a short bit of bushwhacking left to do on the other side before we reached the next important feature, the Little Colorado River. We needed to ford this river and it is unique because of its bright aqua blue color due to glacial silt and minerals that make it not a good water source. A few days ago, we heard there were a pair of Haydukers ahead of us and weren’t sure if it was anyone we’d met from the description. Today, we saw Brooks Cascasdia prints all day with another print. Katherine wears Cascadias, but should have been on the Horsetheif Alt. I remembered that one of the brothers we met about a month ago wore them and that we did expect to see them again since we were doing bonus miles on alternates that they weren’t doing. As we turned the corner to the Little Colorado, my hunch was confirmed! Happily lounging on a rock was Evan and Chase, who Katherine and I had met on Day 26 (see photo on that post). They were in great spirits, skinnier, and more bearded. 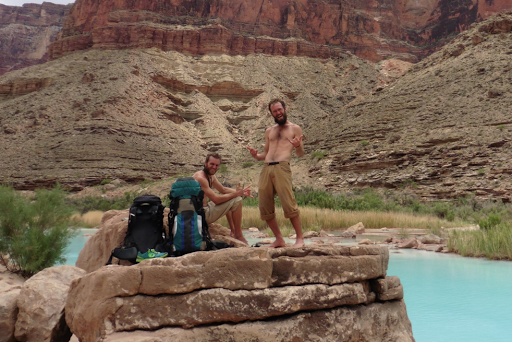 It was fun to see them and we talked for awhile. They confirmed that the four miles of the bushwhack that we missed was just as bad, if not worse than what we did today, so we were glad we missed it. I still think their trip is pretty cool. They are doing the route strictly by the guidebook, have cached all their resupplies (did do 5 days camping in Jacob Lake and eating in town to hit their Grand Canyon permit dates), are taking about a month longer to do the hike, and have yet to stay in a hotel, take a formal shower, or do laundry. They don’t have a phone and haven’t talked to any family or friends other than sending out SPOT locations every couple days. Pretty cool! While talking to them, we saw all the rafters walk by that had docked their boats so they could hike up the Little Colorado a bit, which was much warmer and cleaner than the Colorado River. The funny thing is that we knew many of the rafters. It was the people who gave us the hitch and then two separate rafters who saw us at lunch yesterday on the Nankoweap and they had hiked quite a bit upstream to look for a spring. Just a funny coincidence as it was two random spots off the beaten path of the Colorado that we all were crossing just briefly at the same time. The crossing of the Little Colorado was time consuming as it was pretty wide and deep. After a couple efforts by both of us to try various spots, Gavin found a line that was butt high for me. It was fairly swift and took considerable effort on my part to stay upright. It was safe, but I wasn’t interested in swimming like the rafters and was happy to make it to the other side. 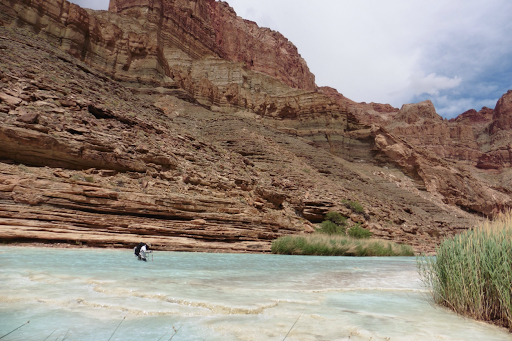 I got a shot of the water draining into the Colorado River from above as we hiked up the Beamer Trail. Really cool to see the blue water mix into the river. 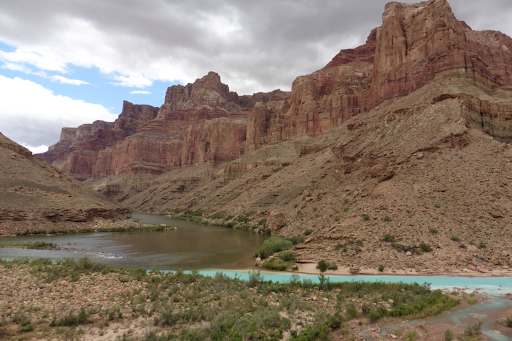 The last few hours of the day was on the Beamer Trail and I am a huge fan of it! It basically contoured high on the ledges above the Colorado providing the most wonderful views from above and relaxing stretches of trail to just take it all in. 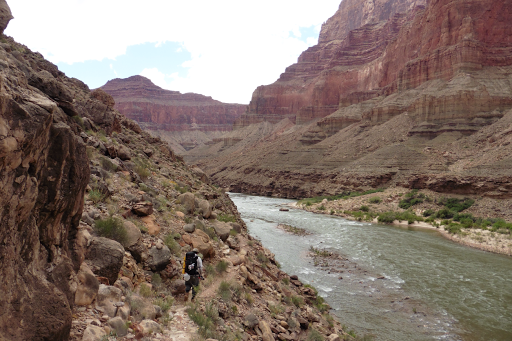 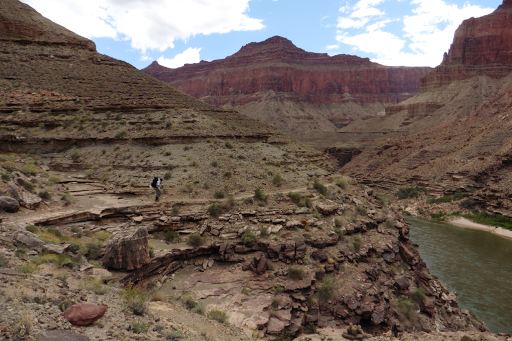 It did have some work involved as the trail would weave in and out of washouts and pour offs where some down and up climbing were required. There were little cairns everywhere to guide the way in those parts. 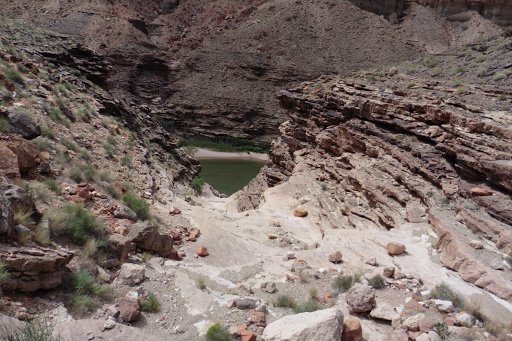 Had we completed the Horsetheif trail, we wouldn’t have gotten to do this 6.4mi stretch of the Beamer Trail and it’s been one of my favorite stretches of the whole trip. Now that I’ve done this stretch, my recommendation to future Haydukers would be to pick your poison. From Nankoweap Creek, if you’d rather climb cross country than bushwhack, avoid the first part of the bushwhack and do Horsetheif to Kwagunt Creek. Then you’ll get a taste of everything and not miss the Beamer Trail. 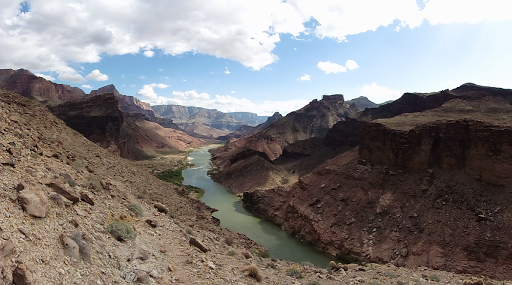 It was very low mileage today and that was expected more due to the timing of the hitch, but it was more the terrain and socializing that derailed us than the hitch. We are well off our permits by a day ahead or so and not sure how bad that will be if we run into a ranger, but they seem to be understanding given what we are trying to do and all the variables involved in such a long leg. At this point, we can take a zero in a few days at the South Rim when we resupply and I’ll be back on permit, so there’s hope of doing the next leg right. Tonight, we are camped at the Lava Canyon Rapids. I’m in a protected area obstructed from the view, but still get the wonderful breeze and white noise of the river. 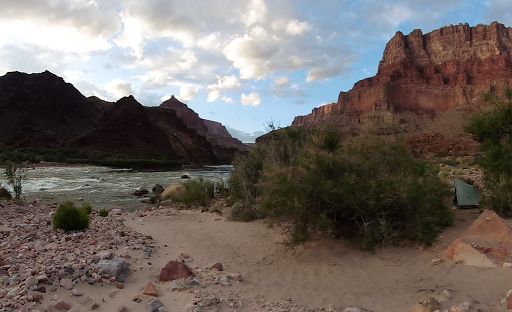 The clouds have gathered quite ominously and it’s been quite the show to watch. I don’t know if this is common in the Grand Canyon to have such strong weather, but it definitely accents the “grandness.” There has been lightning and thunder and there is rain coming down now, but not too hard. Again, man, what a day! 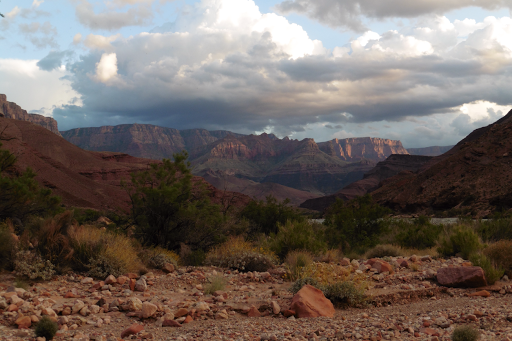