May 6th
Colorado River @ Lava Canyon Rapids(683.8)-Colorado River @ Hance Rapids (697.1)
13.3m
Alternate Title: Plan Goes Awry AGAIN…
Today started out good and with a plan…this whole leg has not gone according to plan and we are two days ahead of schedule. That has thrown us off permit in the Grand Canyon and I am normally particular about that, but in talking with rangers to get permits, it seems that they are understanding about Haydukers and how difficult it can be with all the variables over such long legs. Being two days ahead is great in my book and I’m excited to take a zero to catch up on things before we head out on a pretty difficult 10 day stretch on the north rim. In theory, I can pitch a tent anywhere, but in the Grand Canyon, there are long stretches of very exposed areas and it has been windy with chances of rain or storms each day. The goal for today was to try for a 21mi day. That’s more than we’d ideally want to do, but choices were limited given the non-exposed camping options and how that would set us up for the following day. Gavin and I have different hiking styles and mine (go all day without stopping much) tends to wear on people over time. Gavin is reaching that limit and we are both trying to accommodate to meet somewhat in the middle…but more on my end. I knew 21 was ambitious, but I tend to force goals regardless of sanity and sometimes I find it fun to see what I can do. Gavin likes that sometimes too, but we each need to do it our own way to make it happen. I go straight through with few breaks and he stretches the day out more with breaks factored in. It has not been easy for either one of us to adjust, but we are both trying…We started out at 7am with more of the Beamer Trail. It was much different than yesterday and was not so much on the ledges of the Colorado. It was low and on the beach more in sand. Underwhelming, but smooth enjoyable morning hiking. 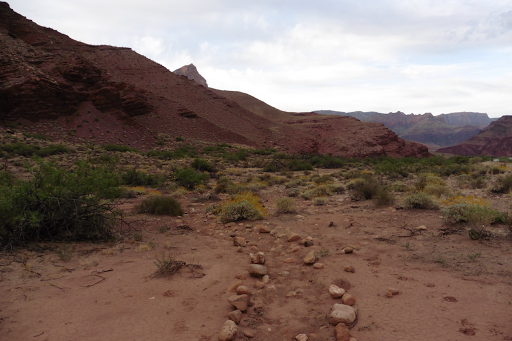 Then we got on the Escalante Route. It took us high along the cliffs looking down on the Colorado and also came off the edge and wound back some too. The miles are reportedly 25% longer than noted in the Hayduke maps and we found it to be true. By lunch, we had to reset our goal to a location at 19mi, which seemed totally doable. We were both happy that we were finally meeting in the middle, making good miles, and both doing it comfortably…we knew it was too good to be true. 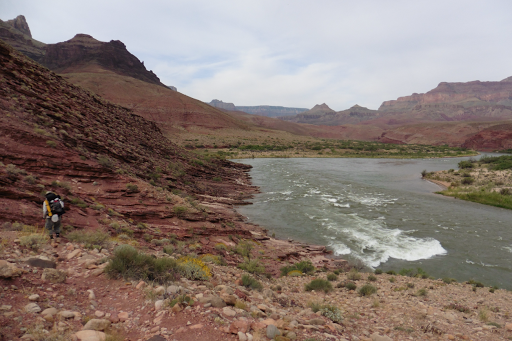 Right after lunch, we had a steep hike up and then we were going to drop back down relatively quickly. The trail would along the top of a canyon there were a pile of logs blocking the trail. Gavin mentioned it, looked for another option, didn’t see anywhere else to go, and headed on over the logs. I did the same and looked at the GPS track a bit to make sure it was on track. It was a bit off, but close and it had been like that for many of the Grand Canyon trails. I put it in my pocket and spaced out for a bit taking in the awesome views from high above. I then remembered that we should have gone down by this time, so I checked the GPS again and we were well off by half a mile. Dang it! I yelled up to Gavin and we took a minute to look at the map and tracks. It noted a high and low trail, so we figured we were on the high trail and decided to keep enjoying the great views and hike on. Here is a shot from above looking down on where we are headed. 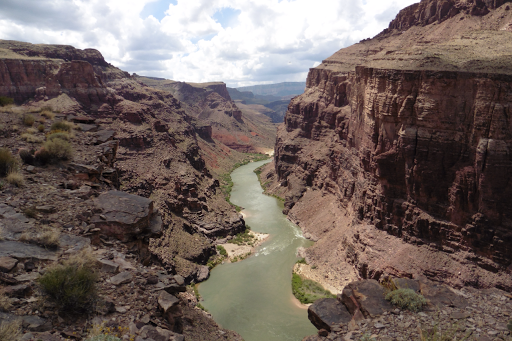 Then we cliffed out and couldn’t go any further. We checked the map to now see the small note we both missed about going DOWN the pouroff into the narrows we had passed a mile back. Ugh! We were doing so well! We hiked back and went down the picturesque narrows (having lost 1hr 20mins) and then realized that the comment about the low and high trail referred to the low and high part of the beach, UGH! While we were up there, Gavin found a really nice camera that was shockproof and waterproof. We hit the power button and it actually worked with the last photos having been taken almost exactly a year ago. Put out the word for anyone who lost a LUMIX camera last year up on the cliffs between 75 Mile and Papago Creeks. Here is the narrows and a photo pointing to the cliff we were up on instead of the beach. It was a BIG mistake! 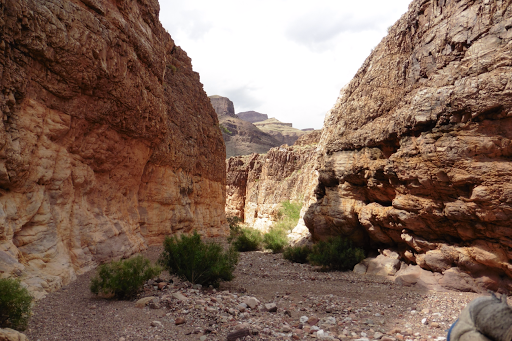 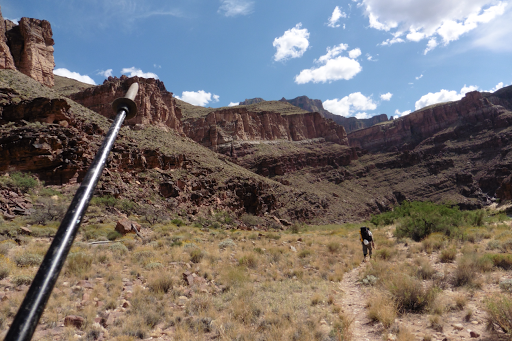 My way of dealing with this was that we’d just hike later to make up for it, but Gavin wasn’t having that. He was not going to wear himself out hiking miles when we were two days ahead of schedule. Hence the conflict we’ve had the last few days. I totally see the reasoning in his thoughts, but my wired go go go mind is rejecting it. We decided to hike to the next water spot and discuss it there. Along the way we saw all the rafters we recognize from the last two days setting up to camp across the river. It’s fun to leap frog with them each day and yell hello across the river. They watched in what I imagine is perplexed wonder as we slowly traversed rock boulders along the beach and then did a pretty high class 3 scramble up to a short cliff walk that then took us down a loose rocky gully. I’m sure it seemed crazy from their vantage point of why anyone would voluntarily do this for days…weeks…months…believe me, it crossed my mind during that stretch. 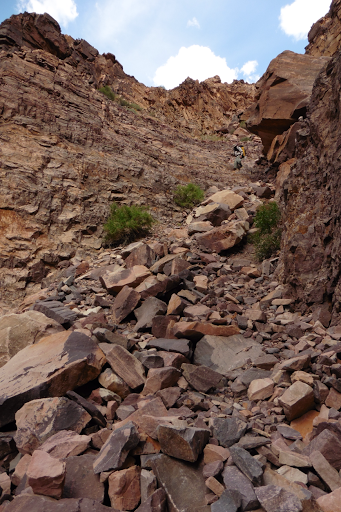 We made it to the water source (and campsite) at 5pm, having done just 13 Hayduke miles(plus at least two bonus miles). I wanted to continue til 7pm, but that would land us in an unknown exposed campsite still short of our goal. Gavin was ready to call it a day. The clouds were gathering again with rain in the distance and I was not sure it was the best idea to head out on an exposed area. It was really frustrating to be so short of the goal I wanted, but I decided to just call it a day and we are camped at a popularly used site for the first time in the Grand Canyon. There is a small group of weekenders camped here too and we know mice are terrible at these sites. We hiked up and out from the trees to hopefully have no little visitors tonight. Of course the clouds have cleared and part of me wishes I had kept hiking. The wind has picked up and is blowing tons of sand into each of our tents. Not the end of the day we had planned! It is beautiful though! 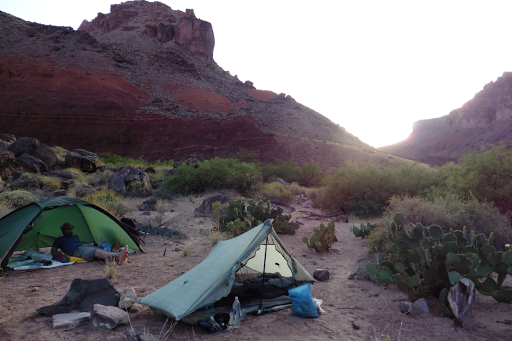 We both have different priorities for the next two days of this leg. I want to push mike to make it to town to get a zero and tend to blog stuff. Gavin may not want to do that if the weather and terrain isn’t enjoyable. He may choose to take it more relaxed and come into the South Rim on my zero day. We have decided to hike separately tomorrow knowing my goal campsite is about 19mi away. We have different hiking styles and both will aim to hit that site if we can. I’ll leave earlier than Gavin and he may hike an hour or so later than me to make it, but if he doesn’t feel up to it, he’ll take it easy and we’ll meet in the village. Sounds like a plan…but lately our “plans” have not had any impact on what actually happens. We’ll see what tomorrow holds… 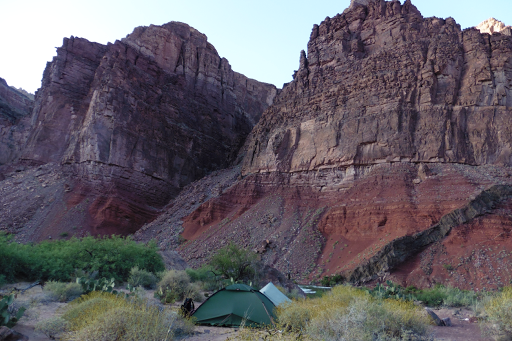 On a side note, I want to mention something about the water in the Colorado River. It is definitely not thirst quenching and we can’t quite describe why. It’s just flat and almost seems to make me more thirsty. Gavin’s been putting flavoring in it to help drink more. Also, it’s pretty gross to think about all that is in this river and I don’t even want to put my feet in it. In particular, the park asks that you just pee directly into the river rather than on the beaches or campground areas because of how dry it is here. There’s no way it will dilute or wash away on the dry ground, so that’s what people do. I’ve witnessed men and women doing it and that really brings it home.  We are all pulling water from the communal pissing tank. Thank goodness for the Sawyer Squeeze filter! I just can’t help but think of this everytime I take a gulp of piss water!