May 14th
Teddy’s Cabin(795.1)-Tapeats Creek(802.5)
7.4mi
Alternate Title: Four By Four!
There are no words to describe the crazy in this day! I swear, it’s like an initiation into some club of insanity. There were many times today that we did question our sanity. We joked that we must be part of an experiment to see what stupid crap people would do if told that it was part of the route they’d been hiking for almost two months. Have we been brainwashed into doing anything the Hayduke tells us to? It is sorta like the Hunger Games where you have to face whatever obstacles the game makers throw at you…but we were were crazy enough to volunteer as tributes! This day is the one I’ve dreaded since hearing about this trail. Lots of sketchy stuff, cross country bushwhacking, plunge pools, and dangerous stream crossings. Very slow miles, and basically whole day just to go a handful of miles.
The day started out earlier than expected when we woke up at 4:20am to a thunderstorm. It sounded like hail for awhile and the wind was gusting all around us. Somehow, we were mostly sheltered from the wind and the rain wasn’t horrible…however there was no sleeping through a storm in a tent. Good news was that if it got really bad, we could go in the cabin for shelter, but that wasn’t needed. The rain tapered off just as it was time to pack up and all I could think about was how all this rain would affect the upcoming plunge pools and creek crossings.  With the wet tent and prepping packs to go through wet brush, Gavin needed extra time and we got started 30mins later than usual on a day that we should have started probably 30mins earlier than usual. Deep breath needed on my part knowing that this wasn’t a day to start late.
There was no warm up for the day as we dove right into the “fun” right away. We went down Saddle Canyon. It starts off as a bushwhack (or more of a car wash effect with wet brush) down a drainage for at least an hour. It wasn’t as horrid as I imagined it would be and the brush wasn’t as thick. It seems like the two pairs of Haydukers ahead of us did a great job of clearing the path, so that helped. Don’t get me wrong, the brush was wet and not enjoyable, but better than I imagined and even better than some of the brush yesterday on the climb. 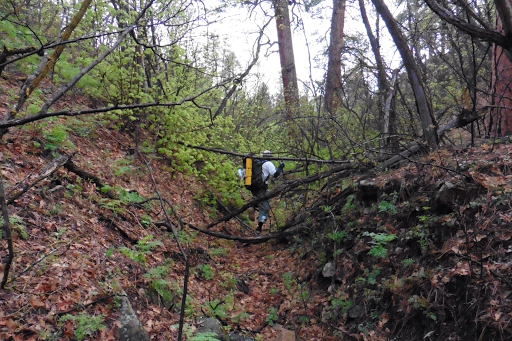 Soon, we started to see the sandstone rock and the beginning of the next big event…plunge pools! This is where my camera was safely stowed away for the day and the rest of the photos will be taken from my iPhone in its waterproof LifeProof case. We found ways around most the pour offs and only had to submerge into three. I didn’t get photos of the first one, but have good ones of the two others we slid into. It was like a small slide into a puddle a couple of feet deep. The problem is that the angle of it made it impossible to walk down and it was kinda like sliding into home base, so there was no way to avoid getting mostly wet. Notice that Gavin’s “capris” got completely shredded in the bushwhack and are officially shorts now. 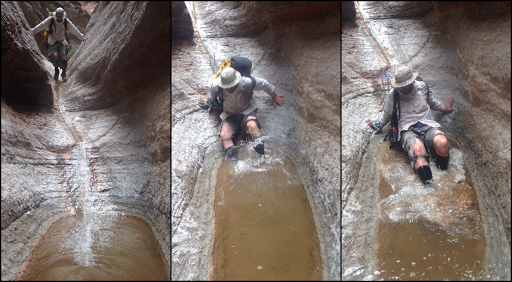 The storm clouds from the early morning stuck around all day with that ominous presence of danger…especially on a day like today when we were dealing with narrow canyons, water levels, and exposed climbs. Soon after the first pour off, there was an impassible area that required climbing high out of Saddle Canyon and then dropping back in after some sketchy and quite brushy work along a “spit of land” that rose above the canyon. People don’t describe this part of the day and we found it to be tiring mentally and physically with really thick brush and steepness with loose rock and dirt. It took well over an hour just to make this move up an over…possibly even two…I lost track. We made the mistake of following the GPS track and found ourselves out on a spit of land that was on top of the one we actually needed to be on. There was a note about this from another hiker that we noticed too late of course and were too lazy to walk back. Imagine a two tiered boat and you’re up on the higher tier looking down on the people swimming in the pool on the deck. We needed to get down to that deck after getting atop the higher deck and passed the turn. Apparently many people have done the same since we didn’t seem to be the first ones up there and it was the track on the GPS. We wondered if maybe something has eroded or washed out since the track was made. We thought we could get down following the track and we were able to do it, but I would definitely NOT recommend it! It was covered in brush like tough manzanita and the down climb was sketchy with exposure and loose rock and dirt. At one point, I was caught in some brush, and somehow my water bottle fell out and went rolling far down to where I couldn’t even see it. Dang! I already lost a water bladder to a cactus this leg and now a water bottle. At least I still had a liter of water in my other side pocket and still two platys for storing water if needed.  Once down and on the correct spit of land, I took a photo of the cliff we were on and came down. Sorry, it was with the iPhone. We came down the right center part and should had walked back further to the right apparently. 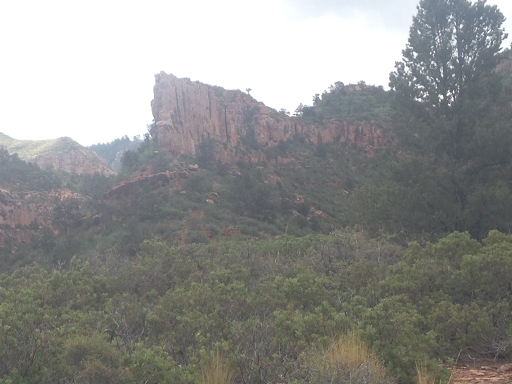 That climb took an eternity and the clouds got darker as we were up there. We finally made it to the tip of the correct spit of land and needed to go down the nose of it to get back into the canyon having bypassed the impassible section. We were just drying off from the first pour off and this is when the hard rain decided to come down. We fortunately had a flat clear spot and pitched Gavin’s tent (for the second time this trail) to sit out the storm. It rained for about 30mins and we decided to have lunch early in the tent since we needed to optimize our time today and things were moving very slowly. 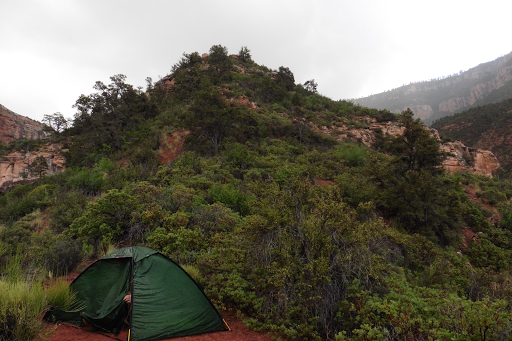 We got packed up an hiking again after an hour or so, but the dark clouds remained. Throughout the day, thunder would rumble and drops would come down. Sometimes actual rain and sometimes just a few drops. At one point, it poured and we were pretty proud to find a spot up against a cliff wall that angled perfectly to keep us completely dry and up high. The on and off rain made an already challenging day on rocks and in water even more difficult. It was in the low 60s and thankfully, we only had to get in three of the plunge pools and they weren’t too cold. Here’s some shots from the plunge pools both looking down from the top and some action shots. The last one was the final one and the biggest. It went up to my chest and some years it has been 6ft deep. 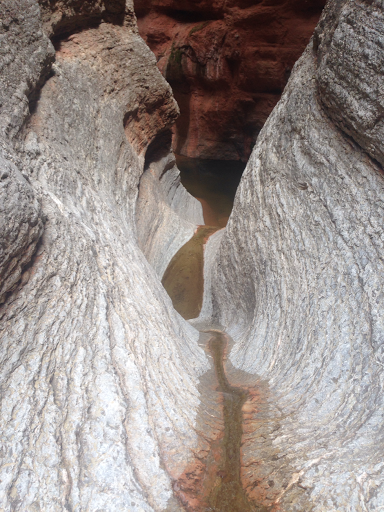 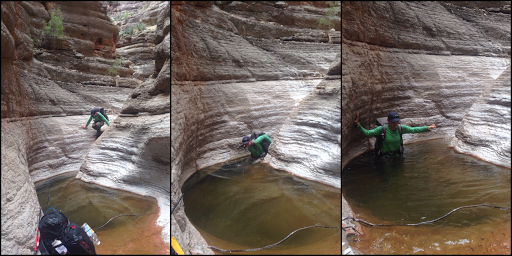 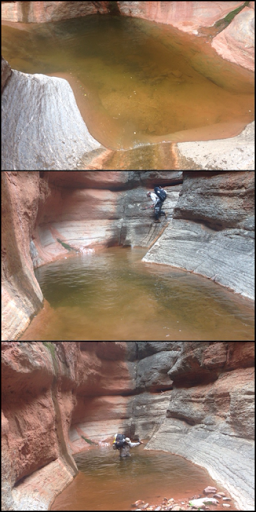 We knew from previous Haydukers that it would take much of the day to make the four miles or so through Saddle Canyon with the bushwhack, cross country climbs to avoid impassible areas, and the pour offs. With the added stops for the rain, we made those four miles by 3:30pm. Four by four, ha! There’s a first! Hikers often say things like 10 by 10 or 12 by 12, but to do 4 by 4 has to be a rarity! Here I am at 3:30pm, soaked from chest to toe, and having completed just four miles. 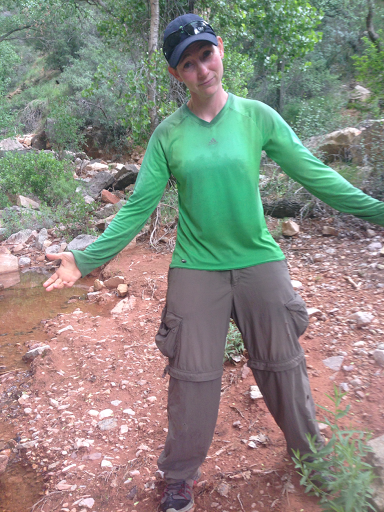 So after all that, we were only done with one third of the events scheduled for the day…we’d be lucky just to complete two at this rate.  Our next challenge was Tapeats Creek. Another one of those key Hayduke words that make the hair on the back of my neck stand up. The Tapeats is a creek that is known for being swift and we knew we’d be crossing it many times and even hiking in it some. It was mainly dry and slow going on rocks the first three miles, but we got a rhythm going and it felt good to hike with fewer obstacles…other than the smooth rocks. 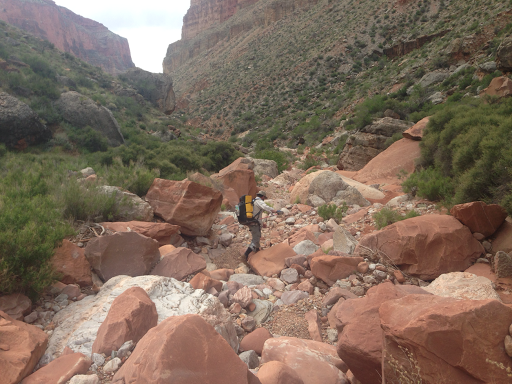 All much of the day, I had everything stowed away from water and I had my iPhone in my sports bra while my pants were drying out from the plunge pools. In my pocket, it is waterproof in a Lifeproof case, but it fogs up the camera lens, so I like to keep it high and dry….plus, my wet pants were trying to fall down…I did sew the button over to make them tighter before this leg, but apparently did that while bloated and now they are still a bit saggy, sigh. So, the point in me mentioning this is that while on the Tapeats rocks, I was hiking and reached down my shirt to use my camera, like I did all day, and accidentally yanked my white gold chain necklace with a diamond on it that I wear everyday(my twin sister also has one). It broke and the diamond flew off somewhere in the rocks, shit! We looked for a bit, but it was gone. Aaarrrrghh!!!! Not the best day.
We continued on to where we’d have to get into the Tapeats and it was intimidating! It was a gorge with no option, but to hike in the swift creek down stream. After a full day of rain, it seemed to be raging, but we didn’t know if it was normal. It was 6:30pm and we really wanted to push late to get this part over with, but I wasn’t comfortable enough to attempt it. Here is the spot we needed to go down and Gavin testing the waters. 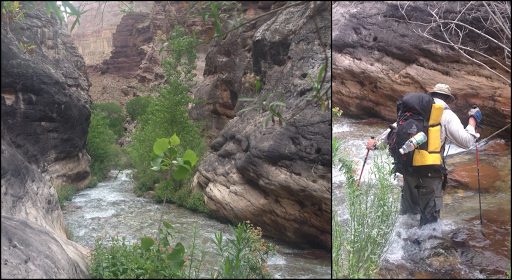 We decided to wait til the morning and hope that the water level would be lower. We hiked back a bit to a campable area and had to accept that the miles were not happening today and that the weather just made it unsafe to proceed. So, that left us with the longest 7.4mi I’ve ever hiked. It is raining a bit now, dang it! That creek better be fordable tomorrow….Here’s our campsite up above Tapeats Creek. 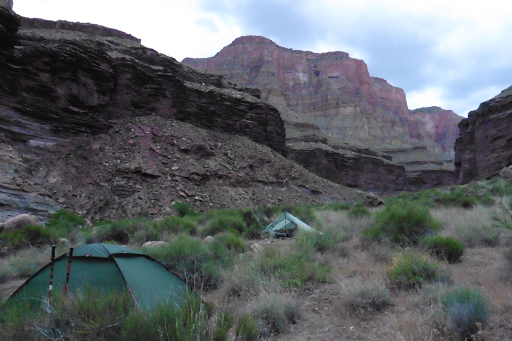