E Fork Virgin River(906)-Stave Spring(922.3)
16.3mi
It was chilly last night and I wore my beanie and down jacket as I slept. We are getting really lucky with this cooler weather! Today, our first five miles were along the E Fork of the Virgin River, which required getting our feet wet many times to cross it as the trail crossed it. It was upper 40s when we started and warmed to upper 50s by the time we finished. Most of the day was cool and uncharacteristically cool. Brrr…it was nice and scenic, so totally worth it. 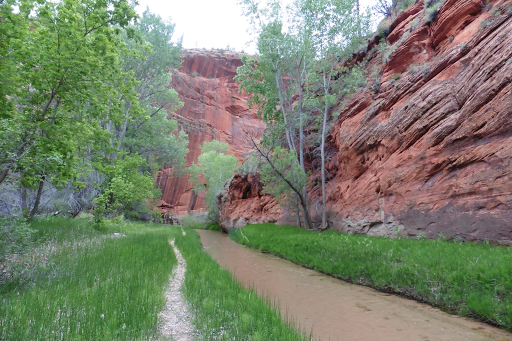 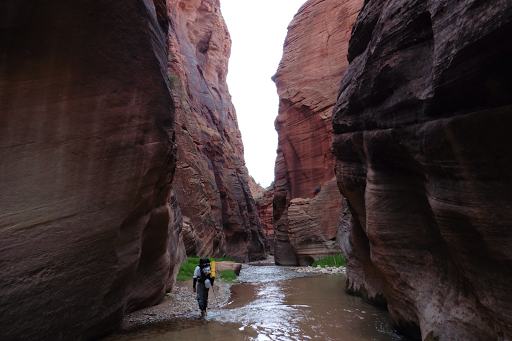 My feet got pretty messed up last leg with the combination of three days being wet and walking on rocks and then hard road walking. The balls of my feet are still swollen. Turns out they are actually huge calluses that cover the whole ball of each foot. Better than blisters! They will be happy to get a week of rest after these final three days. They did fine yesterday in the the soft sand. And ok in the water today. They were numb most the time. 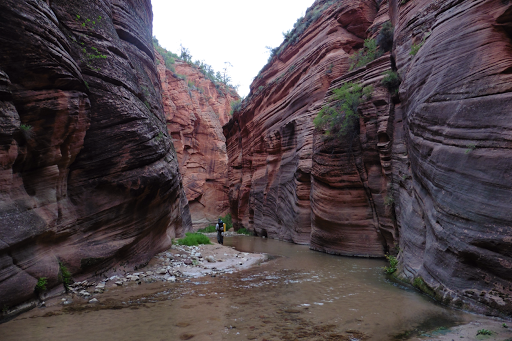 After the river walking, we climbed up a steep crack called “Fat Man’s Misery” to get out of the canyon. The camera was put away as it required full attention and hands, but I’m kicking myself for not getting a shot. It was fun and felt like the Hayduke’s final obstacle, but was not safe by most standards as I was carrying 5L(10lbs) of water and many moves required climbing straight up and sometimes slightly overhanging. Only on the Hayduke, would a climb like that one…steep, thin, exposed, loose large/small rocks, scrambling, brushy, covered in poison ivy…be considered normal. At least I’m off trail in two more days if I get poison ivy. With it being the last few days, we are noticing things like our last time wading in cold
water and our last insane scramble today. It’s odd to be finishing, but it doesn’t feel like it because my summer is just beginning. My mind is less saddened about the Hayduke ending and more excited about what’s to come afterward with my visits in California and doing the Tahoe Rim Trail and Lost Coast Trail.
Soon after we got up Fat Man’s Misery, we were officially in Zion! I immediately loved it. 360 degree views of colorful slick rock spanned on forever. I really enjoyed the next hour or more of hiking and it was one of my favorite stretches on the Hayduke. Like most of the Hayduke, the pictures don’t do it justice. The overcast skies really helped. 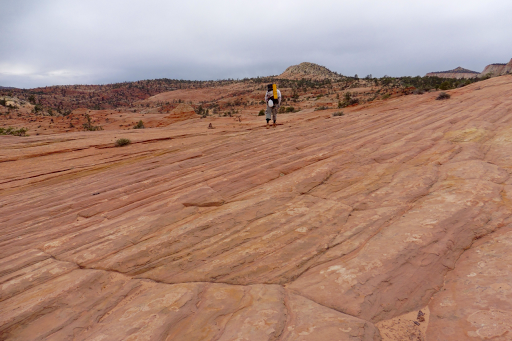 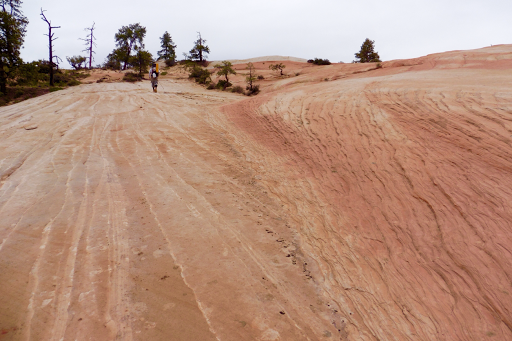 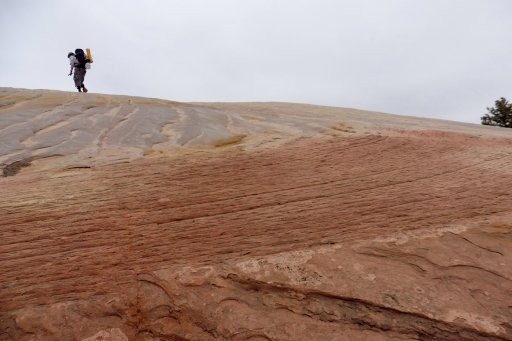 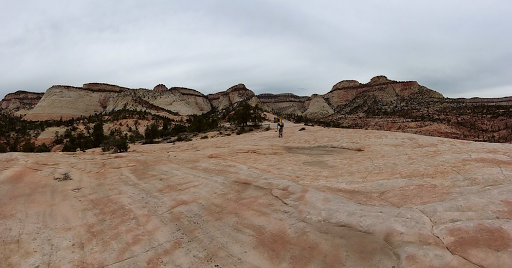 The afternoon started with some time through washes (our last wash/cross country!) to connect us to the East Rim Trail just after crossing the busy scenic drive main road. The trails we will be on from now on will be high use trails through the park. We passed Jolly Gulch, which people seem to rappel down into. There was a great traverse that gave expansive views of canyons below. It was sandy walking, but my kind of trail woth gradual elevation changes and great scenery! 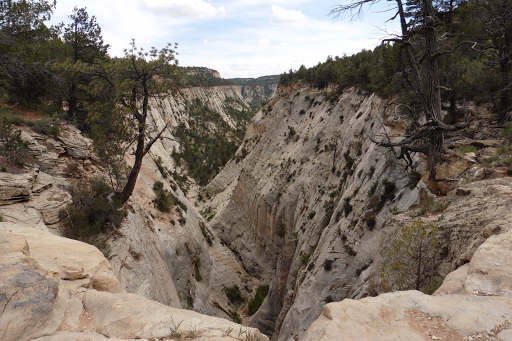 It is the beginning of Memorial Weekend, so we saw lots of people out on the trails. I mentioned Katherine was just behind us yesterday. We continue to leapfrog. Since we camped out of sight of the trail last night, she ended up going ahead a bit as we followed her footsteps this morning. Then, at the park road, we noticed she hitched in to take care of permit stuff, so we are ahead again, unless she passes again tonight since we are again out of sight of the trail.
We finished early again today just after 4pm, we took a break and I was able to look up the weather for tomorrow. 60s and 50% chance of showers or thunderstorms. Not good since we need to do 21.5mi. Since we had time, we hiked on a bit further to cut down tomorrow’s miles and are stealth camped well off the trail. I was happy to get a protected wooded spot on pine needles, but Gavin prefers high up on rocks since he has a bombproof freestanding tent. He is somewhere up on a rock about 100yds away and I’ll see him in the morning. 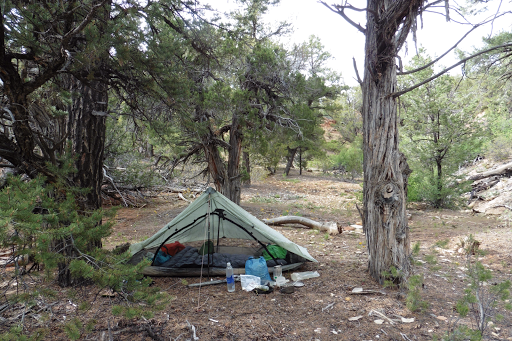 We are only 3.5mi away from the “official” finish of the Hayduke at Weeping Rock (guidebook calls it Weeping Wall?). The rest of tomorrow and the next day will be the bonus traverse of the park, which feels more like an appropriate ending to me since we hardly saw anything in Zion. So, on we go tomorrow and we are hoping that the rain will hold off for us…I’m loving these early camp nights. I have time to watch two more episodes of House of Cards. Life is good:)