The day started off damp and cold. I got up at 5:30am to get the food bags that were hung nearby through the cold wet grass. I was warm in the tent, but there was a lot of condensation on the ceiling. As soon as I opened the doors, the cold air hit me. It was in the low 40s/5C, but the dampness was making it cut a bit more. It didn’t help that I was putting on my shoes that were still wet from yesterday’s rain. Brrr! E made our daily itinerary based off of online journals of past hikers. With this trail, I’ve mentioned that the daily guesstimate is helpful to keep on our permit dates later in the trail. Today was a tough day for all the past hikers, so E was extra cautious to give us a low mileage buffer today. Good thing she did! I called the exhaustive ups and downs of today the “GDT Workout Plan!” Somehow the elevation charts above do not do it justice.
We left camp at 6:30am and warmed up quick with a cross country 1000ft/300m climb up and over Tornado Mtn Saddle. We expected the cross country up to the final scree ascent to be the time consuming part, but it was the scree. We followed an animal path most of the way until the screw started. It was deceptively draining and slow going, but was totally what we’re here for. The morning light and low lying clouds made it even more enjoyable. 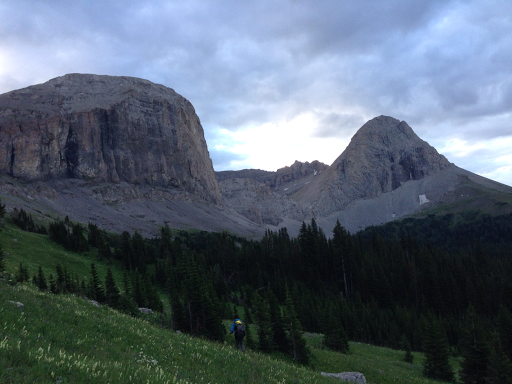 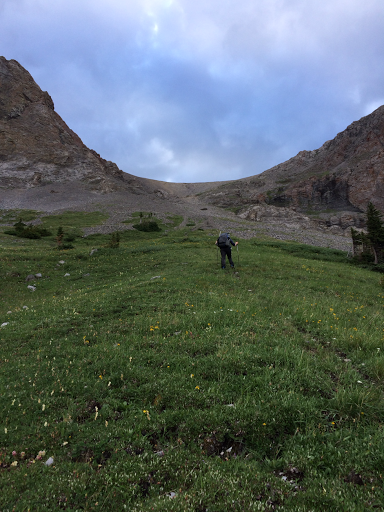 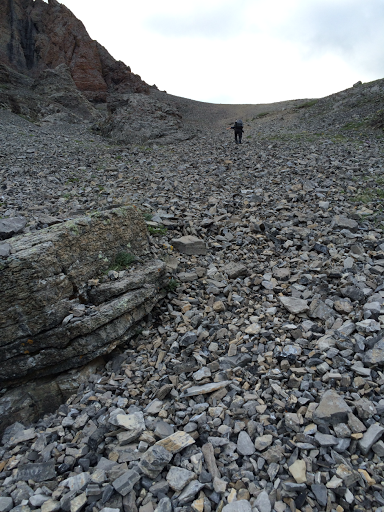 It was quite windy and colder as we got to the top of the saddle, but was blocked when we got over to the other side. Of course the views were great on the way down. 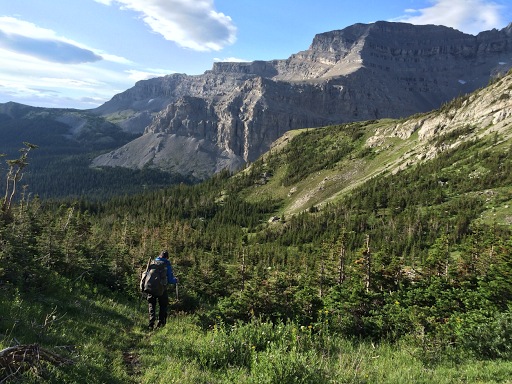 Partway down from the Saddle, we stopped so E could eat her breakfast like usual a couple hours into the day. We decided to make this stop a long one and pulled everything out to dry since it was sunny and there’s been no predicting what the weather might bring.  We wanted to take advantage of the sun while we had it. Both our tents were dripping wet and it was great to dry those. E’s sleeping bag gets pretty wet regularly with how much carbon dioxide her body emits at night, so that was important to dry too. It was a nice break and we were relieved to have planned in this low mileage day, so we didn’t feel rushed.

After breakfast, we bombed down on some nice trail. We are in a stretch, since yesterday supposedly, where 59mi/95km is officially GDTA maintained. The trail is even clearly blazed with orange blazes on the trees. The GDT is still in its infancy as far as long trails are concerned. Right now, any maintenance or conservation efforts are done by the volunteer members of the GDTA, which is really amazing. 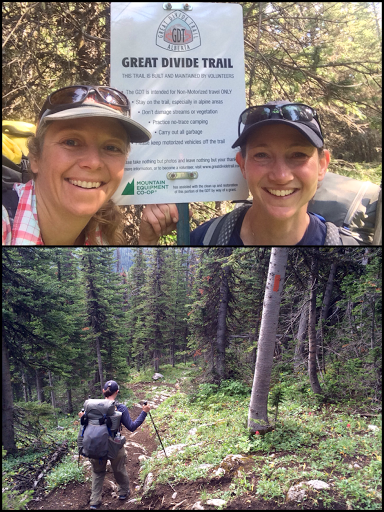 We reached a fork on the trail of about two miles of trail that you can either take the official trail (possibly overgrown) or parallel it on a dirt road that could be suction mud. We’d had our share of road walking so far this leg, so went with the official trail and really enjoyed it! It was just low lying overgrowth lower than knee high hardly noticeable. The trail was easy to follow and goes along a nice creek.  WELL DONE GDTA! I’d tell anyone out here to go for the official trail over the road walk. There were a couple log bridges to cross. One of them was too scary for me, so I walked through the water instead. Here’s E crossing it 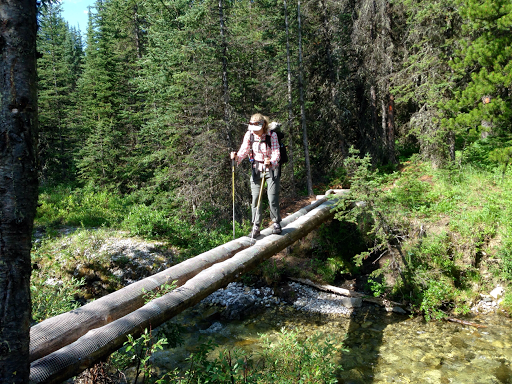 Before lunch, we started the big climb up to a ridge. The GDT has a lot of steep trail so far. The kind of climb that puts you in slow motion as you pace your ascent. E goes with the steady pace and I tend to do spurts. We hiked up halfway to a good viewpoint and had lunch at noon. By then, with the time consuming hiking and drying break, we had only gone 7mi. Definitely good that we are still ahead of schedule and that this low mileage day is part of the plan. Despite the hoards of flies, the lunch spot was great! Better than mosquitoes, which we’ve managed to dodge for the most part so far. After lunch, we finished the climb and got to do some hiking up on the exposed ridge. It was glorious! 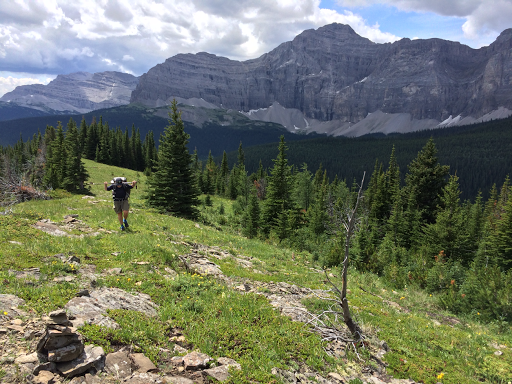 This is one of my favorite stretches so far and I was bummed it didn’t last longer. This GDT Workout Plan ain’t easy, but it has some great reward incentives with these views! We got to stay up there for a couple miles or more and we both absolutely loved it. It was one of those stretches that fill you to the brim. The mild temps, a slight cool breeze, and the clouds just amplified what was already magic. Just great! 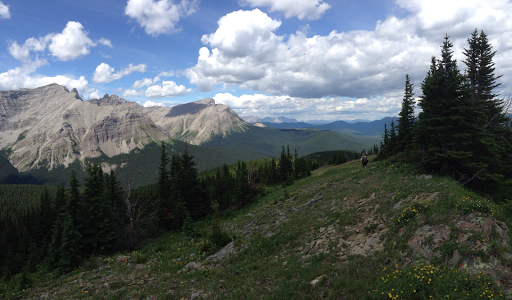 We dove down into the woods again to a bridge crossing and then the trail headed straight up some steep wooded switchbacks. It was quite the exhausting day. Once up top, we got to what is known as the Beehive area.  We took a break just to soak it all in. 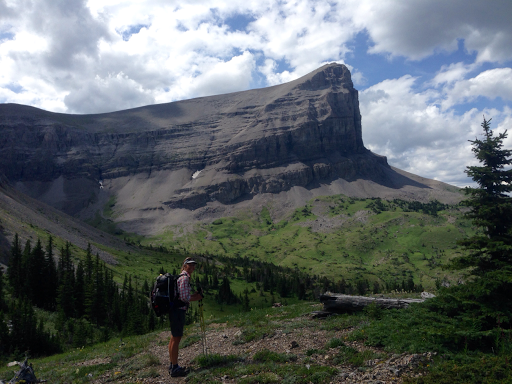 The final stretch for the day had us going over Beehive Pass and then more of the steep downhill to Lyall Creek. 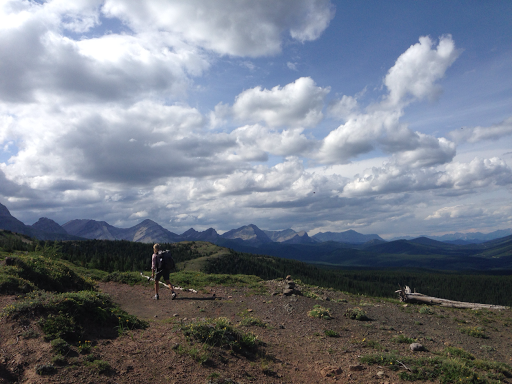 My legs were mush and definitely done when we found a campsite just north of Lyall Creek. It looks like a trail crew probably set up here with horses for an extended period. There is a sheltered area in the trees that’s perfectly protected. We set up the tents and quickly did dinner a bit away from the tents as dark clouds gathered and the wind picked up. 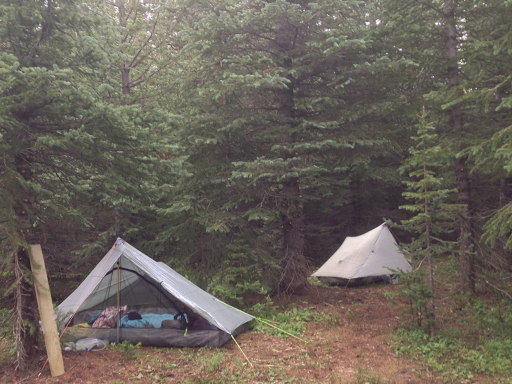 Not long after we got in our tents, it rained steadily for about 30mins. The rain (and this day!) has totally put me to sleep and I keep dosing off, so sorry if any of this is disjointed or stops mid sentence. Another great day on the GDT!