Note: Not elevation chart today because we were on an alternate off the GDT.
Oh man, what a day! So much happened today that it felt like four days in one. We decided to do the Coral Pass alternate.  It parallels the GDT and adds about 9mi/14km to the leg. What we miss is a lot of dirt road walking. What we get is an opportunity to do some cross country stuff and go over a scenic pass. It is much more challenging and time consuming, but that’s what we’re out here for and we hoped it would be worth the effort. This alternate is mentioned in the guidebook, but we could not find a GDTer that’s been able to do it yet because it requires the perfect weather and conditions window. As we’ve now learned, this area from Coleman to Banff is prone to rain and storms this time of the year. We found out yesterday that  today would be clear and decided to go for it! We started the first couple miles/kilometers of the Coral Pass alternate last night and were happy with how we were set up. We wanted to be able to relax and take in the day and had plenty of time…we thought.
The morning started out the coldest yet! We left at 6:30am, and temps hovered right above freezing as we dipped into an overgrown valley. We followed Cadorna Creek for the first 2-3 hours of the day and there was a thick low level fog slowly lifting. We got drenched from the constant brush. It appears mainly horses use this route. I mistakenly didn’t put on my rain pants and had wet, numb legs. Our feet were numbed too. We could see the sunlight hitting the end of the valley and just pushed to get there and warm. It was VERY COLD! I was too cold to even take a photo, but E thankfully got one. 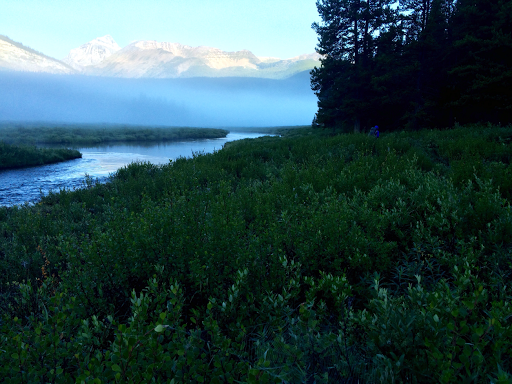 E was in front and stopped suddenly. She saw a figure far in the distance through the fog and thought it might be an animal. It was! It was our first moose of the trip! It put on a show for us and walked around and through the creek. Really awesome way to start the day! 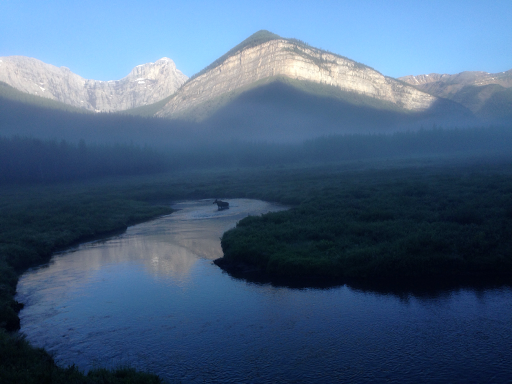 We finally made it to sunlight and to Cadorna Lake and it was an amazing view! We laid out all we had to dry and took an hour break to eat and warm ourselves. It had to be the wettest I’ve ever been in that cold of temps and we only did it knowing it was temporary and that the sun would warm things up. Man, that was a difficult couple of hours, but it was worth it given where we ended up. We had Cadorna Lake all to ourselves and it was a Saturday morning. Look at that view! I didn’t realize it at the moment, but we were headed for those mountains! 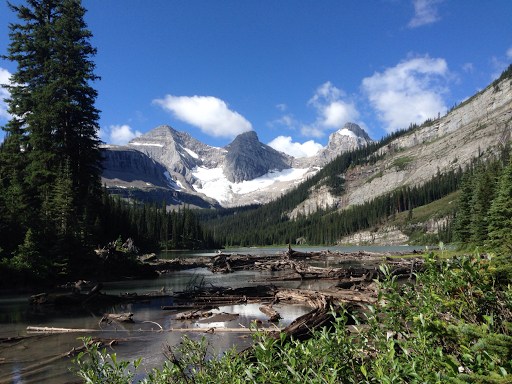 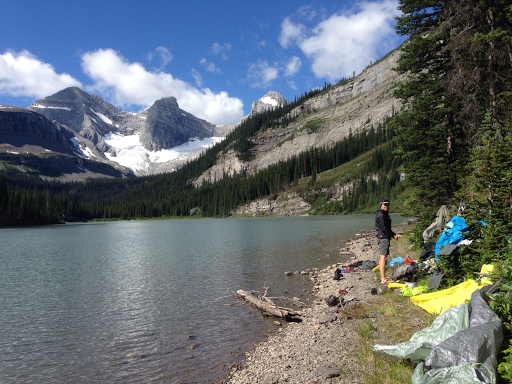 We started the fun stuff after our break. There isn’t a trail leading up to the pass, so we just needed to follow a creek further up and supposedly there would be game trails that would help lead the way. We tried to hug the lake all the way around before getting to the inflow to follow it up, but got to a small cliff band and had to backtrack an bit and steeply bushwhack up. Once up, we ran into a game trail and cruised on and off with the trail fading and then exploring around until we found another one to follow. It was very wooded with a lot of downed trees and progress was not fast, but a fair speed. We had the guidebook description and a GPS track and checked it from time to time to find we were doing great. It was a really fun kind of scavenger hunt for us and we were having a great time. It’s fun to be with E who really enjoys this kind of cross country. We were so busy that neither of us got a photo while in the woods.
Eventually, we popped out above the trees to see those immense mountains and glaciers right in front of us! It was 2pm and the temperature was perfect (low 70sF/21.2C)! We took a nice long lunch break and reveled in the fact that we had this all to ourselves. Just amazing! 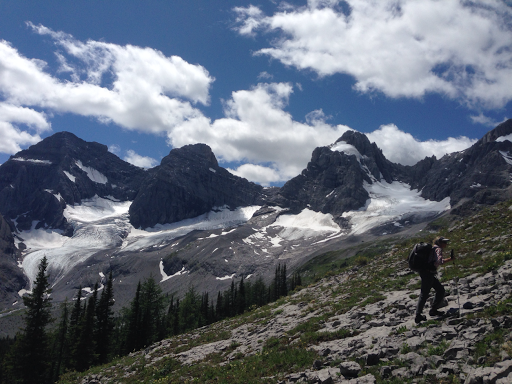 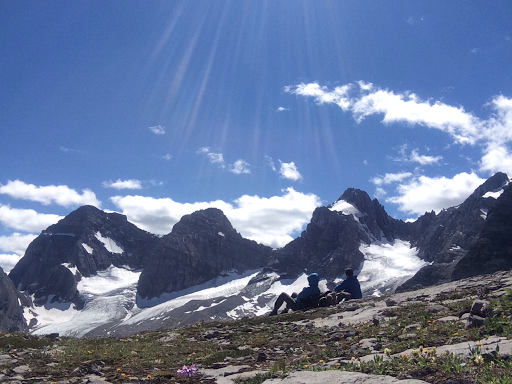 It is called Coral Pass because it is covered in sea coral fossils. We aren’t  sure of the exact science behind it, but our theory is that at some point, these mountains were under the ocean before some upheaval occurred. What were walking on used to be ocean floor and there were fossils everywhere both loose and embedded in the rock. It was difficult not to step on them there were so many! 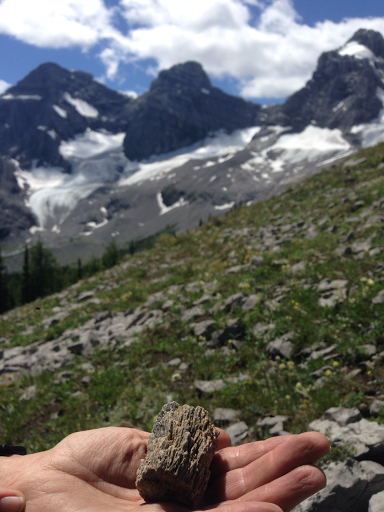 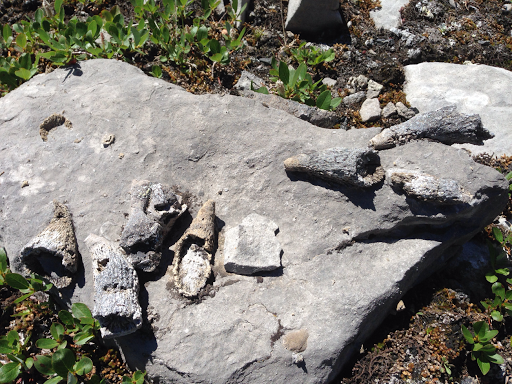 Our lunch was glorious and we took our time soaking it up. The 360 degree view as stellar and well worth the effort and time it took to get there. The pass is just to the east of these mountains and behind us as we ate lunch. Compared to our center stage view of those glaciated mountains, the pass seemed so so, but it was cool. We easily climbed up some scree and got to see the view of what we’d be going down. 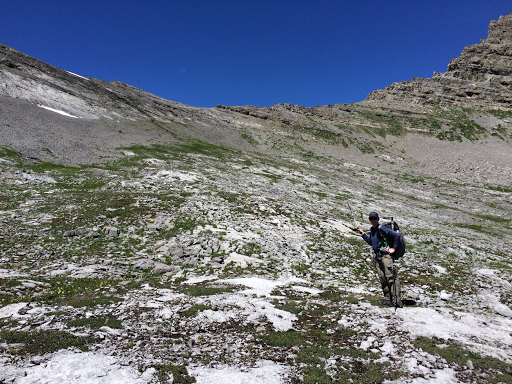 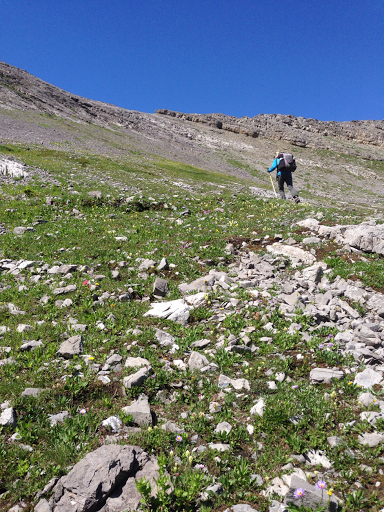 We headed down and had fun boot skiing down some remaining snow stretches. Weee! 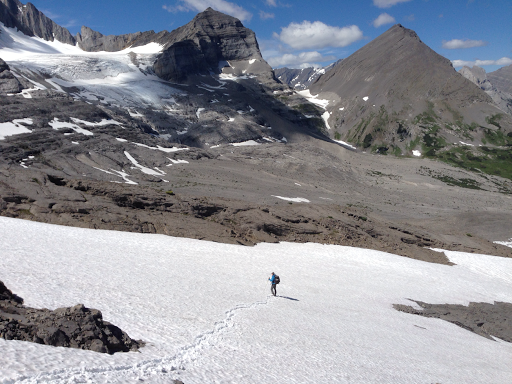 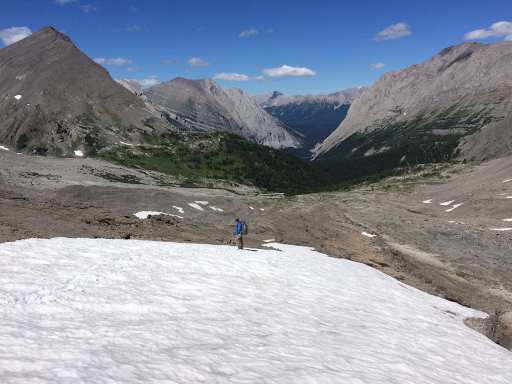 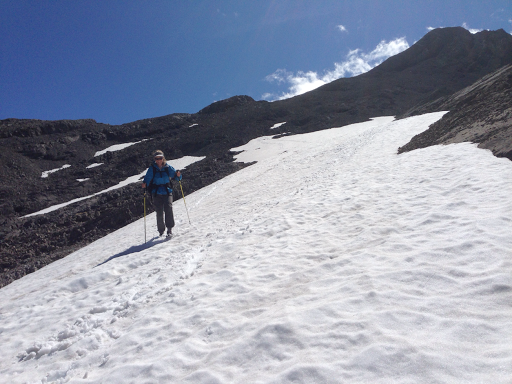 The next task was to follow Nivelle Creek down. It was 3:30pm and we had plenty of daylight. Easy peasy, right? So we thought…The guidebook description was a bit vague, but we knew to stay to the east side of the creek and work our way down. Well, the creek goes down into a gorge as we dropped into a forested area and cliffed out (for the first time). We back tracked and found a steep hill of rocks and grass to carefully go down. 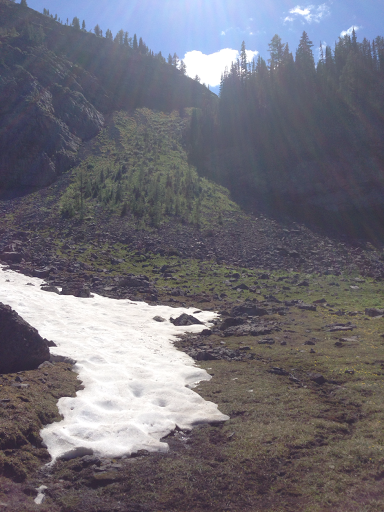 Thinking that was the worst of it, we continued on into the forest expecting to find game trail like we did on the way up…Nope! There was nothing and nothing felt “right.” It was a bit disorienting in the forest and we just kept trying to head down figuring that was the way to go…Nope! We kept hitting cliff bands that we couldn’t get down and had to either hike back up thick brush or contour around to find ways down. This was definitely not a path many take!
We did run into a big porcupine that waddled right with us for awhile. I’ve never seen one for such a long time so close up! It was fast and neither of us could get a clear photo with all the brush, so here’s the best ones. 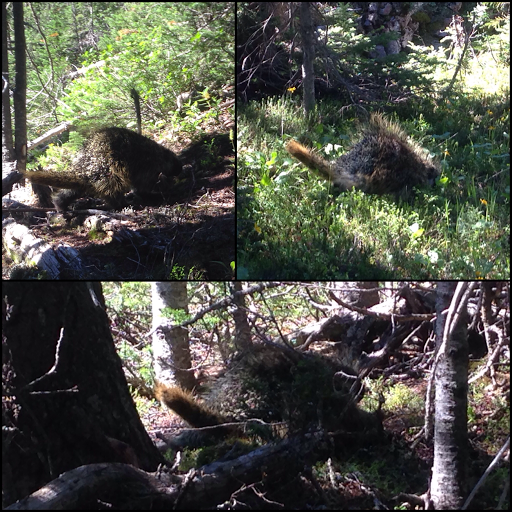 After that sighting, we headed downhill to find another large cliff band dead end. Each time this happened, it was a time consuming scramble through brush to work our way over or up and try again where it would appear to be clear. We inched down layer by layer hoping it was leading to a way down that wasn’t an impassible cliff. The guidebook mentioned ribbons marking the way at some point, but that could be 20yrs old and so much was downed trees, that we doubted they existed. It was getting later and was 5:45pm when we were bordering on completely resetting and hiking all the way back up to start over again. I tried something that felt clear for a few yards and came to a steep down stopping yet again. We really were stumped at a loss of where to go. E suddenly got excited and told me to look up next to my head….it was a pink ribbon! A miracle to run into this tiny thing seriously randomly! 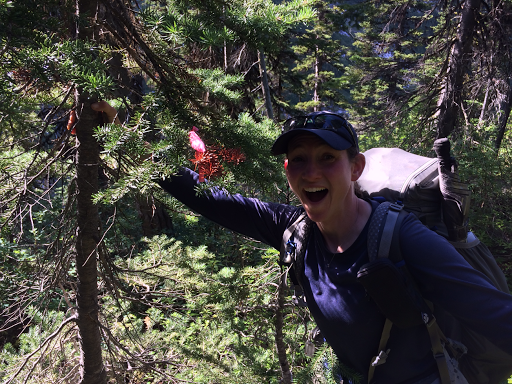 From here, it became a scavenger hunt for more ribbons. We tried to be one with the ribbons and think where we would be if we were ribbons. Sadly there were a lot of fallen trees, so there were definite gaps in finding them. They were really insane in places and teetered on my comfort level as we contoured along small cliff sides trying to find the one tiny spot to get down. E is much more stable and comfortable on sketch stuff and took the lead well. She was super stoked to play the scavenger hunt for the ribbons and kindly waited while I cursed the ribbons that had me butt scooting down slick spongy moss, through thick brush, and holding on to small trees and brush as I inched down. Not my finest hour. Here are some shots of the ribbons we would see from a distance. It really was a miracle we found some of these! 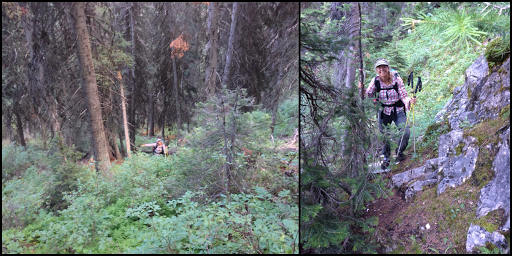 We finally got down to to creek and out of the cliff area at 7pm, and when we emerged from the brush, landed right at a big cairn, ha! We are sure we somehow made that more difficult than it needed to be, but a warning to people doing this alt, you’ll need plenty of time to get down and expect a lot of trail and error. DO NOT do this in rain! It would be way too slick and the brush would soak you. Here is a view of what we came down. Doesn’t look like much, but look at the cliff bands and imagine finding ways down. 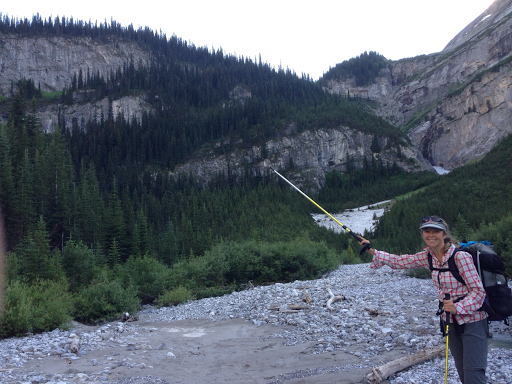 We decided to walk a bit further with the glee of being on flat clear ground and set up camp at 7:40pm. Man, what a day! I am wiped out, but it was totally worth it and E absolutely loved it. We are tired, happy campers tonight. Tomorrow, we hit the town of Kananaskis and a bit of a break.