A note we got from another hiker…if you are planning a GDT hike, there is a stretch in this day (around Birdwood Creek) where the data book and guidebook are 4km over what they really are and how they are labeled on the Gem Trek Map.

This morning was not a section to look forward to. It was over a two hour climb to the top of Palliser Pass in very overgrown trail. To add to that, it rained on and off last night and we knew we’d be drenched in the “car wash” almost immediately. Heck, my rain pants got soaked in the tall grass of our meadow campsite just going to get the food bags from the hanging spot. We agreed last night that we had a short and easy day today and that we could sleep in a bit…oh the luxury! We left a bit before 7am. Good news was that it wasn’t as cold as it’s been lately. The temps were a good balance of staying warm enough to not be frozen by the cold water on the plants, yet not too hot to make the uphill climb uncomfortable in rain gear.  Don’t get me wrong, it was uncomfortable to go through a wall of cold, wet brush for two hours, but at least it wasn’t really cold temperatures to compound it. The camera was put away safely in the rain coat and We were both too uncomfortable to take a photo. When I finally did, everything was so wet that the lens outside the phone had water on it (nothing to harm it). I could’ve wiped it off, but then I realized the photo depicted the morning perfectly… 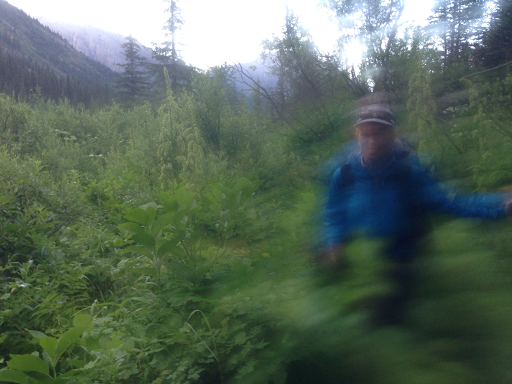 When we made it to the top of the pass, it was a bit wooded and then became a meadow with a small lake with a nice reflection. 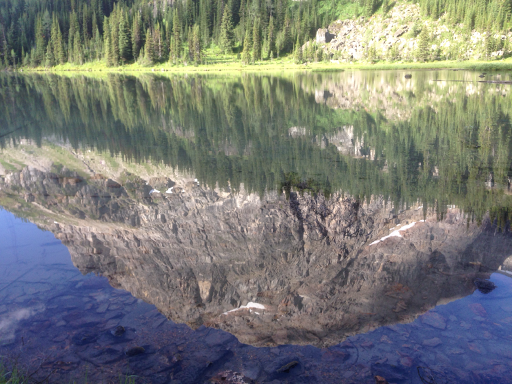 We officially entered Banff National Park once over the pass. There was a small monument marking that we were entering British Columbia and leaving Alberta. We’ve been teetering along this border all hike and often cross back and forth with various signs/monuments. 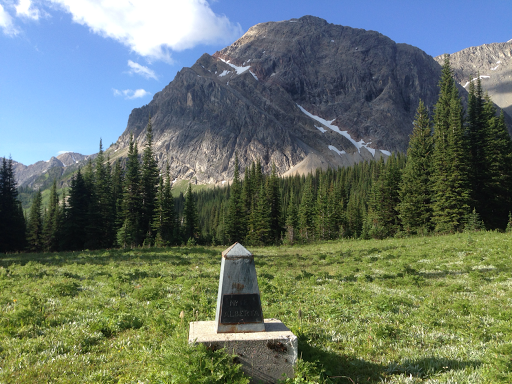 We had our regular morning break at that first meadow, but it was pretty buggy and damp. I was happy to be in sun and take off the wet rain gear. You can see from the elevation chart, that the rest of the day was a mellow gradual level or downhill day. Most of that was through overgrown meadows that just stretched on and on and on. 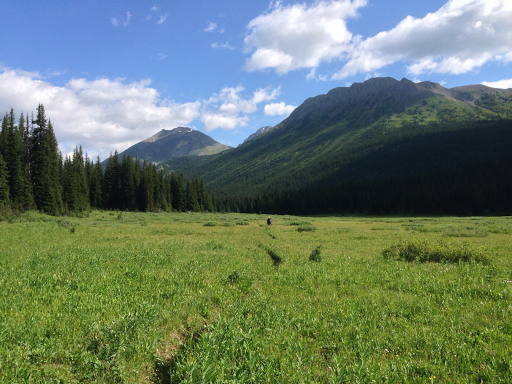 The meadow hiking put us both in a pretty zoned out state. After all we’ve been doing and where we are headed, it had a strange zombie affect on both of us. For me, I’m still weak and my whole body feels like lead from my period. Even lifting my arms with my poles is annoyingly tiring. Since we had a preset reserved campsite, I knew that the sooner I got there, the sooner I could lay down. I wasn’t energized to hike fast, but kept a steady pace. E was in a more mellow relaxed mood and moseyed. We agreed to each do our own thing for the rest of the day and meet at the campsite. 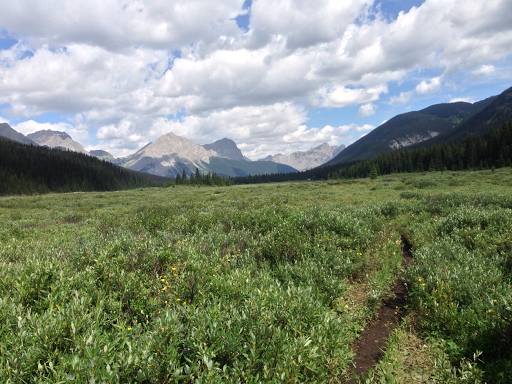 I had lunch at one of the campsites and dried my things out as best I could from the wet night last night. 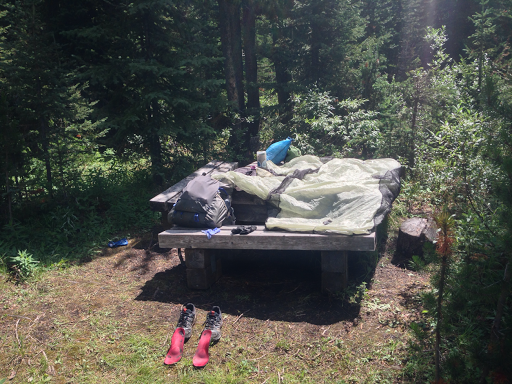 There isn’t much to say about the trail today other than that it was mostly in meadows. Nice views that stretched on and on. The overgrown trail definitely took away from the meadows. It was sometimes shoulder high and the trail itself tended to be in a bit of a muddy gutter with rocks and sticks hiding below the brush. It was also a very well used horse trail, so it had many holes and mucky mud. Much of the day was spent looking at my footing. There were many decent sized frogs. This one was content not to move and we both almost stepped on him. 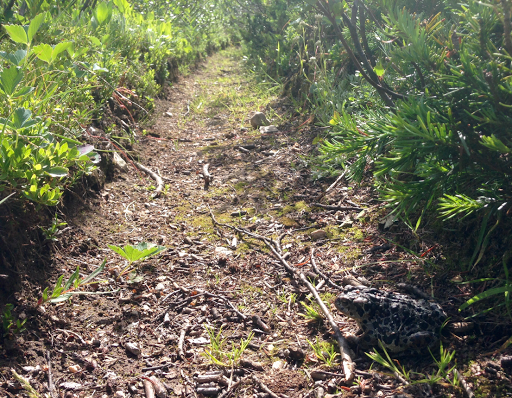 E walked by while I was having lunch, and later I walked by her at her lunch spot. It was good to each have a day to do our own agenda on such mellow trail. I started listening to Amy Poehler’s book, “Yes, Please” and that was entertaining. The last part of the day was forested and in muddy horse trail and that was slower going, but a least there wasn’t overgrown brush. 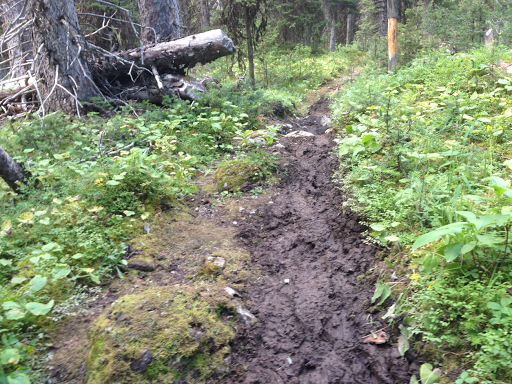 The trail passed a more direct parking area and became less remote. I saw a few groups of people and mountain bikers as the trail magically became quite wide, maintained, and level with pine needles. 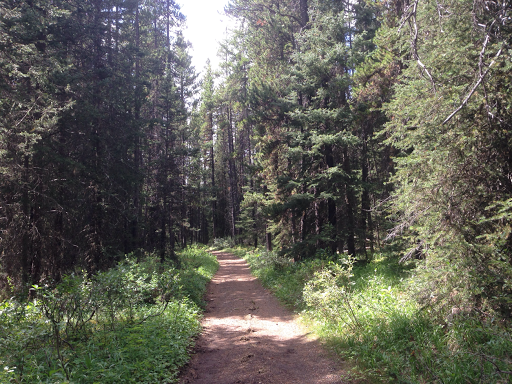 I made it to the Big Spring Campsite just after 4pm and got a campsite by the spring, which is massive and more like a creek. I sat on the bridge there and finished up the blog post from yesterday that I hadn’t finished. Here is the view of the bridge from just below our campsite. Not a bad spot! Love the white noise for sleeping too. 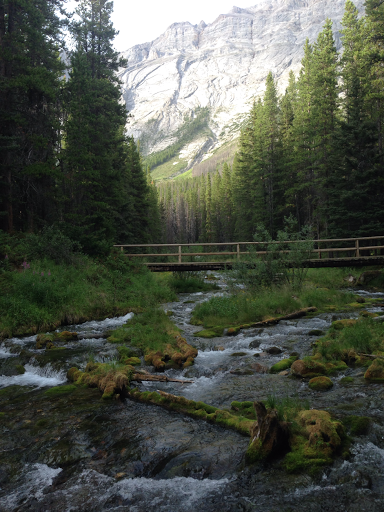 E showed up by 5pm and we set up tents and had dinner. The campsite is nicer than the one I saw this morning. There are 5 sites all in this immediate area. Technically, we had to get two sites since they only allow one tent per site. It was about $8US each and there was a one time reservation fee of $10US for all our sites. We also each have National Park Passes that I think were ~$55US to cover park entrance fees. We are the only ones here tonight and it’s nice to have it to ourselves. 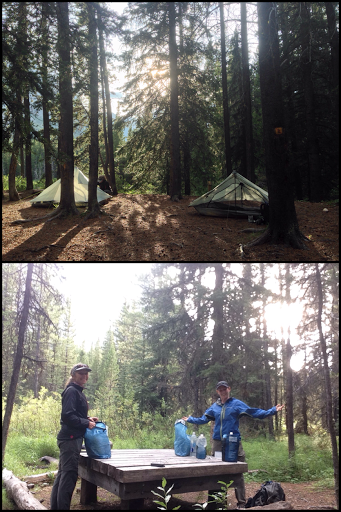 Tomorrow, we have a site at the very popular Lake Magog where we will do a half day to get to and then do some day hiking on bonus trails to see the area. If the weather holds, it should be a highlight of the hike!
I was hoping to have a bonus hour or so and would like to watch a show, but I’m trying to stay focused and edit some photos….and I keep dozing off.  Hoping to earn a show tomorrow night. When I get to our zero in Banff, I plan to get a slideshow of all my photos from the last few weeks on the blog. I let that fall to the wayside and need to go through them all as much as I can now to make the Banff time more productive…I say that and then I fall asleep…I’m totally falling asleep!