It was a chilly one this morning, but more of a brisk morning chill than the kind that goes to your core. It was 37F/2.8C and only got up to 45F/7.2C. As I mentioned yesterday, E and I are hiking independently during the day this leg and meeting at our reserved campsites. We are both usually solo hikers and have fun getting some of that solo time in while we can before the tougher navigation and more remote sections come. I left at 6:30am and E left about 15mins ahead of me. On the way out of camp, I did the side trail to see Egypt Lake and it was a nice way to start the morning. 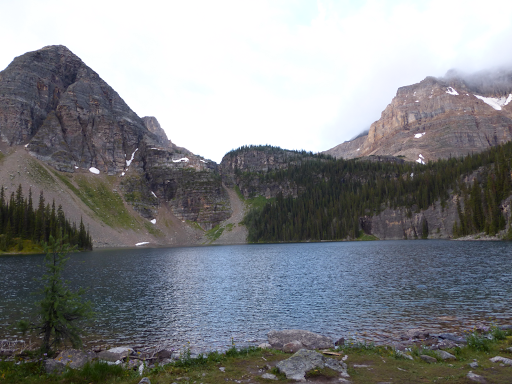 Today and tomorrow has a lot of ups and downs. You can see on the elevation chart that most of today was one long drop (890m/2900ft) and then a long up (740m/2400ft) to the campsite. The morning started off with the climb up to Whistling Pass. There were low lying clouds, but it only rained lightly for a bit in the morning. It was nice to still get the views. We worried we wouldn’t get to see it today. 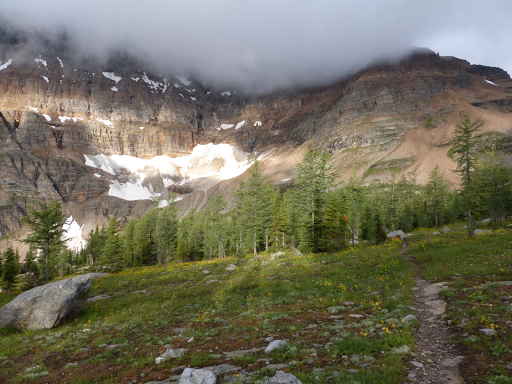 Whistling Pass was nice and had a good view up top. I also liked the small Haiduk Lake the trail goes by below the pass. 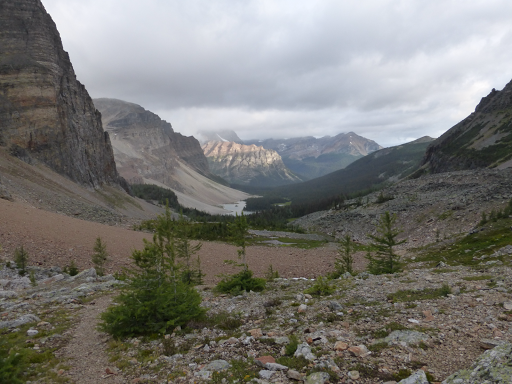 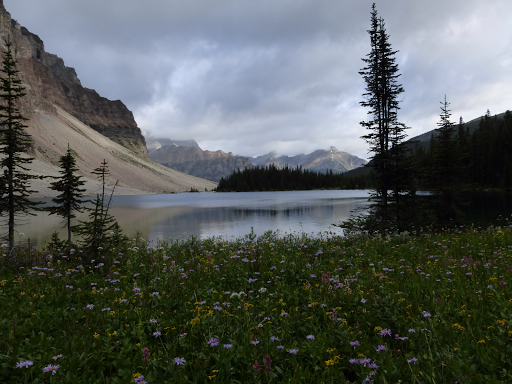 There was some meadow walking until the ascent up to Ball Pass. A rockier one that also had a nice view up top. 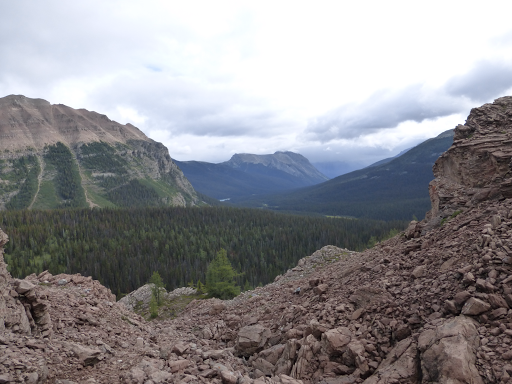 It was a nice morning and enjoyable to each be in our own hiking bubble of sorts. Hiking solo, everything is a bit more heightened and alert. The sounds are louder, the colors brighter, and smells stronger. You’re also more aware of the little things both around you and within you. You’re more apt to soak in the moment without the distraction or sounds of another person. It’s not that it’s better, but just different and nice to change it up.  We both openly appreciate having one another on this hike and simultaneously both have an understanding of each of our needs for time alone out here. It’s nice to team up with someone that gets it at the same level as I do and we can fall in and out of hiking together with little communication needed.
After Ball Pass was the long gradual down to the highway that was through a burn section. Around here we entered  Kootenay National Park. We thought this descent would be more brushy and filled with blowdowns, but it was cleared pretty well and they did a great job with it considering the destruction from the fire. 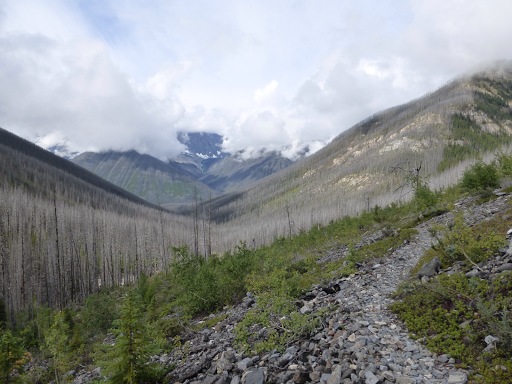 Only the second large burn section (first was Willoughby Ridge on Day 7) the trail has gone through. It was good cruising terrain once I got down a bit and I caught up to E around 10:45am. We talked a bit, both still waiting for that first bear sighting, and I hiked on since I tend to cruise downhills. It was a bit overgrown and wet from the rain, so my pants got totally soaked. The sun was attempting to come out, and I was too stubborn to put on the rain pants. 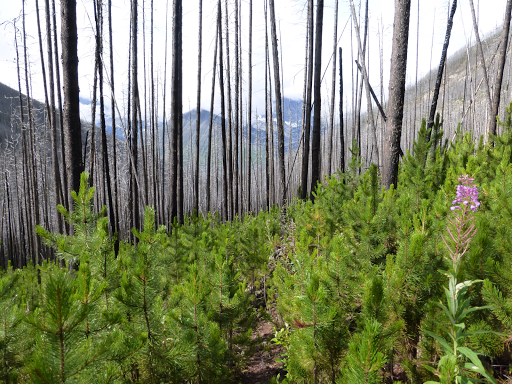 I made it to the bottom of the downhill, and it was the trailhead for Floe Lake, our campground for tonight. This campground is super popular and we were apparently quite fortunate to nab spots when E did the reservations a couple months ago. It’s Sunday and the parking lot was packed. I took the opportunity to throw my trash out since I was carrying some of last night’s dinner that I couldn’t finish. Really glad to get rid of that! By the time I did that, E arrived and we decided to have lunch by the parking lot. Not ideal scenically, but practical with plenty of space to dry out gear and tents from last night and the sun was finally trying to break through. We’ve had to dry out gear/tents at lunch almost everyday on this trip due to rain and condensation.
It hit us that we only had 7mi/11km to go for the day and that we’d be arriving real early to camp. I was excited about the prospect of two episodes of OITNB tonight and E was thinking she’d stretch it out and mosey up the hill. I finished up before E and headed on up the 7mi/11km climb. Soon after I started, a bridge crossed the aqua blue colored Vermilion River. 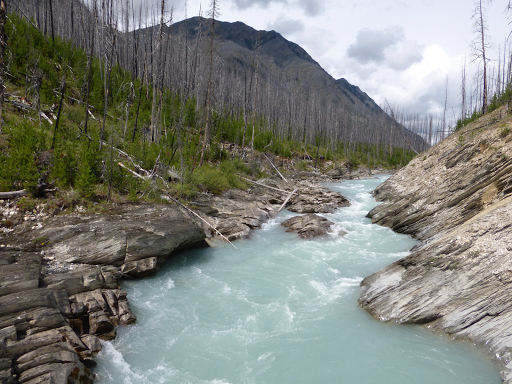 It was gradual most of the way with switchbacks. It was still in the same burn area and quite brushy much of the way. I was smart enough to go with shorts so my whole pant legs didn’t get wet with the wet brush. 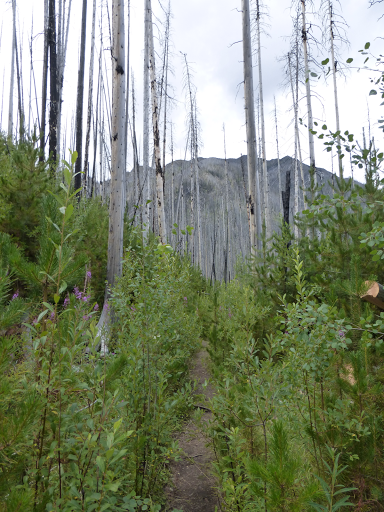 I finished Amy Poehler’s audiobook this morning and enjoyed listening to her reading of it and the bonus things that were in the audio version. On the way up the climb, I started another short book, Navigating Early by Clare Vanderpool. So far I really like it! It’s a young adult book that I know little about, but that there are two young teen boys and they eventually set out on the Appalachian Trail in Maine in search of a mysterious bear. It has started off in a whole other direction and has pulled me in, so I’m excited to listen to more tomorrow. As I hiked up, there was a ton of fireweed in the burn area. 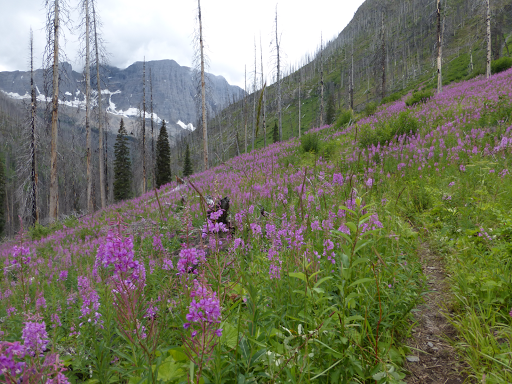 It rained lightly on and off as I climbed. It was still cool out and just right to hike with the umbrella and no jacket. The brush really got to me (over the head in places) and I just got in a zone and pushed up the climb quickly. I got to camp at 3:15pm! Whoa, Floe Lake was GRAND! Aqua water with sheer cliff walls rising up and the low clouds cutting through.

The rain started up again and was actually ice pellets as I pitched the tent and got in. It stopped after about 20mins and I was already warm and cozy in my pajamas and sleeping bag. E arrived at 4:30pm, disappointed in herself for arriving before 5pm. She was trying to stretch it the day. She has little to entertain her at camp and we thought today was going to be a much longer day when we read about it on paper. I was already dozing off with light rain falling again. 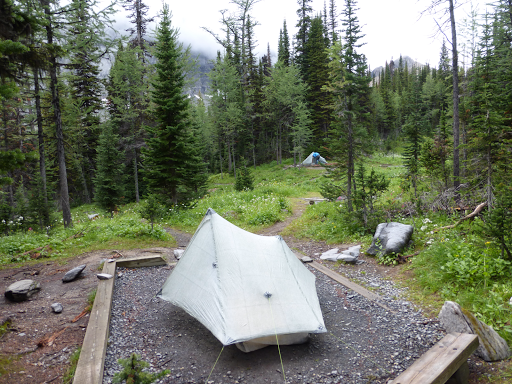 We headed down for an early dinner around 5:30pm. The eating area is on this great little peninsula with nice views of the lake. We were early and had the spot to ourselves as we ate. It was still cold and clouds rolled in, but it was nice. Pictures really don’t do it justice with the enormity of those walls rising up. It’s quite the spot! E got a great shot of me getting water for some perspective. 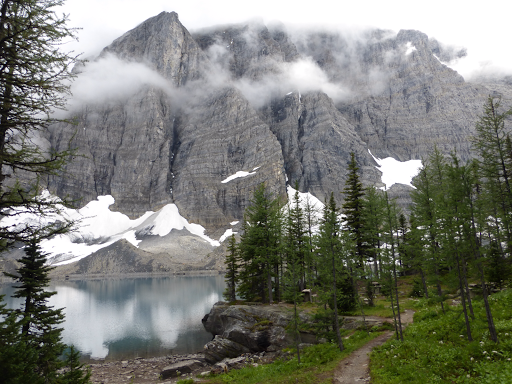 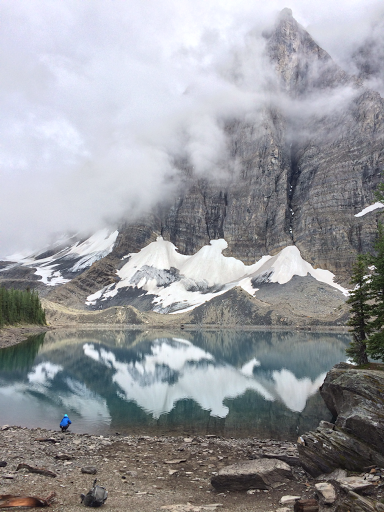 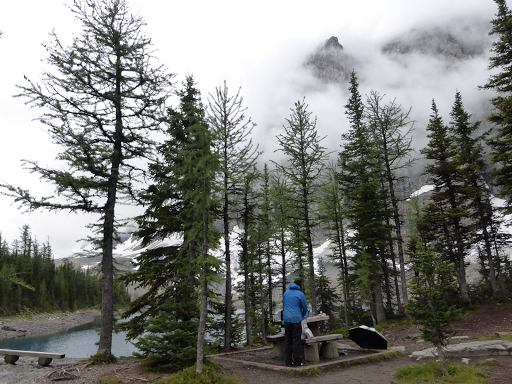 Well, that’s about it. Tomorrow looks to be similar in length, so I’m going to stay up and watch two episodes of OITNB and then sleep in a bit tomorrow. Yep, this is da life!