Day 4: The Wonderfully Long Way Around

Akamina Creek Campground(23mi/37km)-Font Creek Outfitters Campsite(46.7mi/75.1km)
Daily Distance: 23.7mi/38.1km
Campsite Elevation: 6824ft/2080m
Elevation profile created by Zdenek on his 2014 GDT hike  Thank you for allowing me to share these Zdenek! They may not always match my exact route, but are very close and give you readers a concept of the elevation for each day. Some days may have two charts unless I find a way to stitch them easily on my phone. 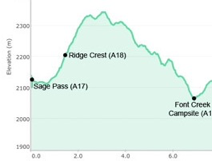 It got chilly last night. I was in and out of sleep in the early morning. Too groggy to pull my storm doors shut and way too out of it to go to the bathroom. I finally got up just before 5am and used the bathroom. Of course, I was just getting back to sleep when it was time to get up at 5:45am. We had an alternate decision to make today. Stick to the original route, which goes on a popular trail through Waterton National Park that has quite a bit of up and down through a variety of terrain…or take the Mount Rowe alternate, which is 4mi/6.4km shorter, avoids a 3mi road walk, easy cross country, stays up on the Divide for 360 views, and has no water. We went back and forth and finally decided to stick with the original route for a few reasons. Mainly, it seemed to be a good route along one of the more popular trails in Waterton National Park. We also liked the variety it presented rather than solely a ridge walk most of the day. We also liked that it had water. We had camped 1.5mi/2.5km off the GDT to legally camp without needing to reserve a permitted site, so we had that hike to do this morning to get us back to the GDT. Once on the GDT, it was a 3mi/4.8km road walk to the Rowe Lakes Trailhead. It was a few miles of wooded hiking before the real fun started. We had a challenging, yet rewarding climb up to  Lineham Ridge. We took our morning break at a stream at the base of the climb and there were a lot of mosquitoes. Here I am covered to avoid the bugs at that break and a shot of where the trail cuts across in the climb. In all these posts, the photos taken of me were taken by E.  THANK YOU E! We both have iPhones (I use a wifi card to transfer my camera photos to my phone) and can take photos freely of each other and AirDrop them to each other from our tents at night using the internal Bluetooth on the iPhone. 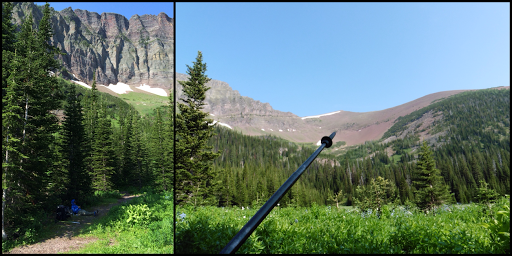 The climb up was great. It eventually led to the summit of Lineham Ridge (8415ft/2565m), which is the second highest point on the GDT. I didn’t realize it until the end of the day, but my camera is acting up again, so some of these panoramic shots might have some stitching glitches. I’m aware, but this is what I got and they turned out pretty good despite the glitches if you look closely. Here is the view looking up and back as we climbed up. 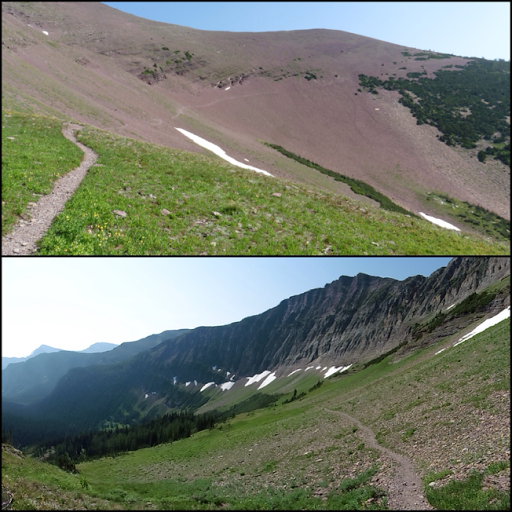 This pano shot shows the bowl we climbed up on the right and we came up the ridge in the center.

Once on top, we could see the Mount Rowe alternate right in front of us. We would have been walking up on that ridge and we followed it most of the day today. 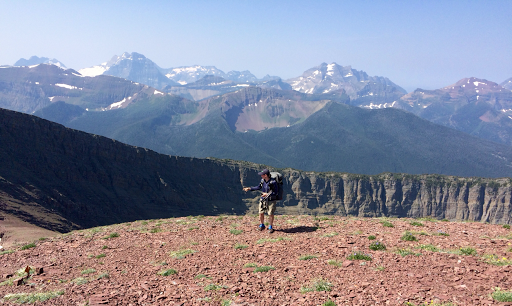 From here, we dropped into a forested area that I’d describe as scrappy. It wasn’t as neat, but got the job done and we both agreed that it had a wilderness feel that felt more authentic than some of the more maintained trails. It would break and we’d enter meadows of wildflowers from time to time and we really enjoyed the variety of the day. 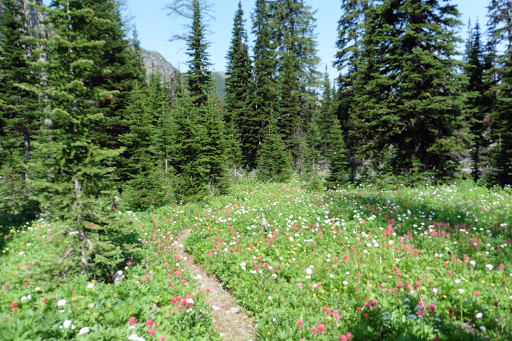 Although sticking with the original route had more elevation change with some steep ups and downs, we were very happy to be down in the forest, wildflowers, and lakes rather than up above it all day looking down. We got our ridge walking in the morning and were entertained all day by the changing terrain and scenery on the original route. If you are the type that likes being up on the Divide rather than the forested stuff, I say take the Mt Rowe alternate. It would also be shorter and less strenuous. Just depends on your preference.
For the middle chunk of the day, we alternated up and down through forests or meadows or along lakes on the Tamarack Trail. The guidebook author calls this his favorite trail in all of Waterton National Park. We didn’t find it as stunning as what we did yesterday, but we understand the appeal. The Tamarack Trail is apparently very popular and wasn’t as busy as it could have been. We saw maybe a dozen people today. Only one backpacker. It still felt like we had it to ourselves most of the day. We went by Lone Lake and then saw each of the Twin Lakes. Again, I didn’t realize my camera was taking less quality photos until after these lakes. That ridge high above the lake is still the alternate we could have taken. 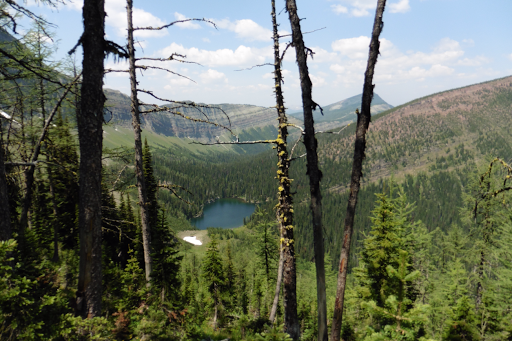 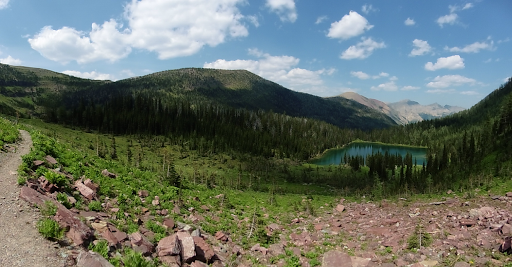 From Twin Lakes, we hiked up to Sage Pass. It’s where the trail is headed on the previous photo. This was our original destination, but we decided to go on over the next ridge line so we could have less miles tomorrow and possibly do a more strenuous yet scenic alternate. Once up on Sage Pass, we got a feel for what I imagined the GDT to be. Less defined trail, some cross country, and following ridges high above everything else. It reminded us of the CDT in places. Once we got to the main junction to start the cool ridge walk, we looked to the side and saw a note left for us written in pine cones. It said, “Happy Trails E & E.” 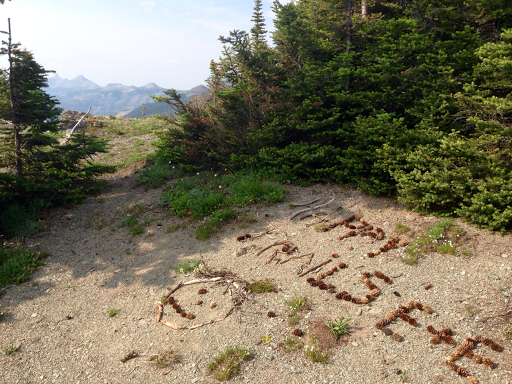 How cool is that!? I have been in touch with as many hikers in this GDT class as I could find. I know three couples ahead of us within a week’s time. It’s a mystery as to which couple left it, but I know I’ll find out soon. It was quite a heart warming boost to see this in such a remote spot and it’s great to have that sense of community on a trail that is so rarely done. We changed it for the hiker we know that’s 1-2 days behind us and hope it also gives him a boost up on that ridge. As for the ridge, check out how awesome it was! 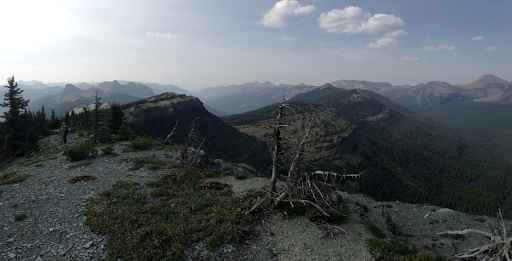 You’ll notice the haze today. There are fires far west and we think that’s what’s affecting the clarity. It’s been a dry year in much of Canada and we just have to hope it doesn’t lead to many fires. 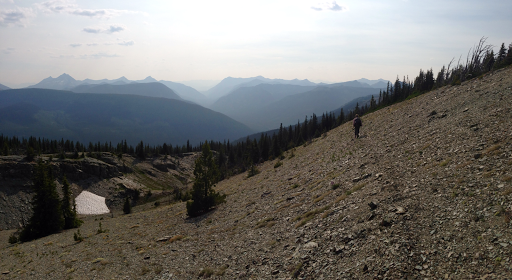 After the ridge walking, we dropped down to a meadow and what is described as an outfitter’s campsite at Font Creek. We arrived at 6:30pm. It is deep grass with a few minimalist spots to pitch out of the deep grass. We were able to squeeze in just fine and it’s nice to have the sound of a stream in the distance. We can even see the ridge we were just on above our campsite. 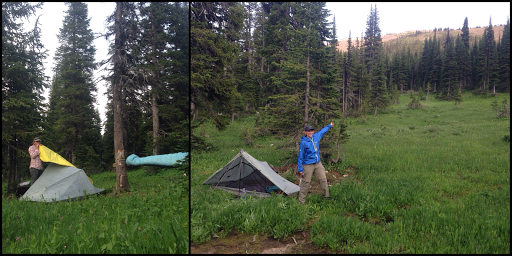 It’s been taking me awhile to get used to blogging efficiently on this trail. It’s difficult with the time it takes to pour over all the pages of maps and guidebooks for details of names and distances. It’s 11:30pm now and I’m ready to SLEEP! I’m gonna need it…tomorrow is considered one of the most challenging sections on the whole trail, so we are happy we did more miles today to give us a buffer of time to work with.