1.5mi N of Howse River Flood Plain(421.3mi/678km)-1mi before Owens Creek TH(435.9mi/701.5km)
Daily Distance:14.6mi/23.5km
Campsite Elevation: 4673ft/1424m
No elevation chart today because Zdenek did an alternate around this section last year.
It was right about 40F/4.4C when we set off at 6:30am this morning. It was a crisp cold, but it felt okay compared to all the wet mornings we’ve had. We tried to stay out of the brush and on the flood plain as long as we could before it got boggy and would eventually become the river. So back up to the demolished trail it was. Our bodies were a bit sluggish, so we were careful with all the climbing over, around, and under fallen trees while also in brush. After about an hour and a half, we were done with the worst of it. We totaled that it was about 6hrs of the rough stuff with fallen trees and brush. Today, there was more crawling under things and we were so glad it was dry this morning! 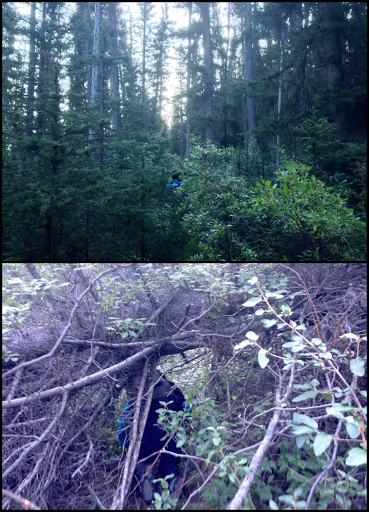 From there, we were on a trail that got slightly better over the next two hours. Still some thick brush and downed trees from time to time, but more gaps between it with space to get a real stride going. We came to a nice viewpoint and took a break just to be out of brush for a bit and do our daily tent drying. 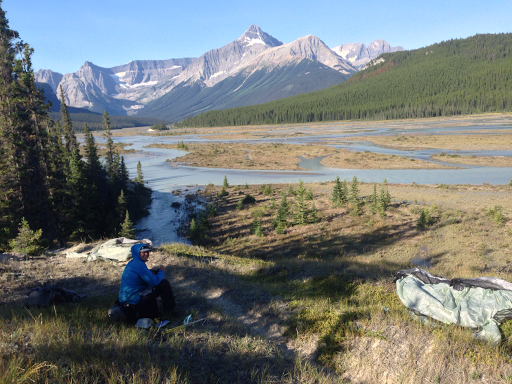 The trail improved as it led to the tourist spot of Mistaya Canyon. A cool spot where the aqua colored water carves through a canyon before going on further to enter the North Saskatchewan River. 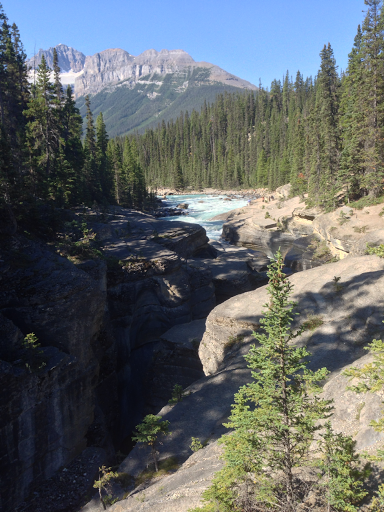 Speaking of the North Saskatchewan  River, we crossed it on a bridge when, from the Mistaya trailhead, the route goes along the highway for about an hour to get to our resupply point of Saskatchewan Crossing Resort.

We had a couple of fun run-ins as we got to the resort. The first was that we saw a hiker on the other side of the highway that had left the resort. It was fellow GDTer Ted who I’ve been in contact with online since before the hike. We weren’t sure we’d meet because he started the day after us. He ended up skipping this last section from Field to here and is planning to take more days to get to Jasper on this next leg, so we should see him again before Jasper. The other run-in was that as we were entering the main store, we had a momentary traffic jam with another customer trying to use the same entrance. I thought he looked familiar and he took a second and then asked if I was Erin. It was Richard who drove out of his way to give us a hitch from Kananaskis on Day 16 after trying for an hour. He was meeting his brother Robert for a backpacking trip. What a coincidence in timing to see both Richard and Ted. With each, had we been a couple minutes off, we would have not seen each other. Here’s pics of the guys L to R, Ted, Robert, Richard. 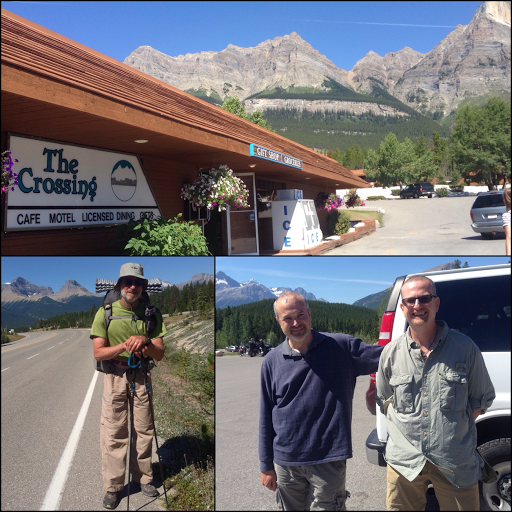 We had bonus time at the Crossing since we buffered for this last section to be much slower going. We arrived at lunch and stayed 7hrs, leaving at 7:15pm. Again, we don’t know where the time goes in town! We ate lunch at the cafeteria there (very overpriced), got our resupply boxes, did some stealth hair washing since the next leg is 7 days, picked up our resupply we had sent, charged everything, made and ate our trail dinners before we left, got to do some internet stuff, and finished off the visit with ice cream. Quite the pit stop! We got wifi for $10 and it was enough for email and loaded the blog very slowly, so I got one post loaded. In the photo is the lawn and shade we hung out at and got wifi. They were even nice enough to let me hang out in the pub to plug things in while I used the wifi. Yes, it was way overpriced there ($6 for a PowerBar!), but we didn’t buy much and got lots done. There is a lodge there, but it’s pricier than we need after a short leg, so we decided to hike out a bit and camp. 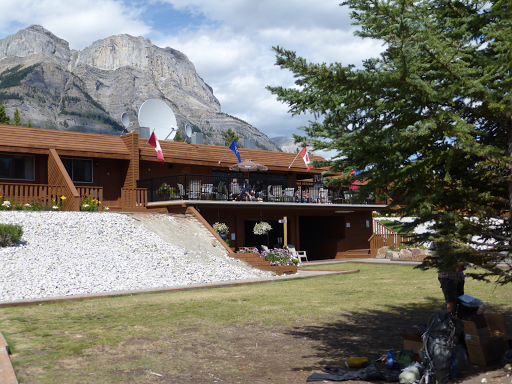 The annoying thing from my resupply is that I got new shoes well before I needed them. In Coleman on Day 8, I uexpectedly had my Montrail Masochist shoes blow out that were supposed to make it here. I had to buy what they had in Coleman and got Salomon XR Crossmax 1 shoes. They have been awesome and I want to at least wear them the next 7 days to Jasper where I can put them in my bounce box. Since I can’t mail anything from the Crossing, that means that on top of 7 days of food, I also have an extra pair of shoes to carry, ugh.
When we left from Saskatchewan Crossing, there is a bike trail that connects back to the trail so we didn’t have to double back the way we came. Since just about all hikers go to the Crossing, I think this will become the chosen route. For those planning a GDT hike, just follow the old road behind the Crossing a short distance to Hwy 11. Cross the highway to immediately connect with the bike trail that looks like an old forest road. It soon becomes the GDT route that takes you to Owens Creek TH rather than road walking a highway or doing the brief and confusing cross country you’d backtrack to get to. This clear trail was a very welcomed sight! 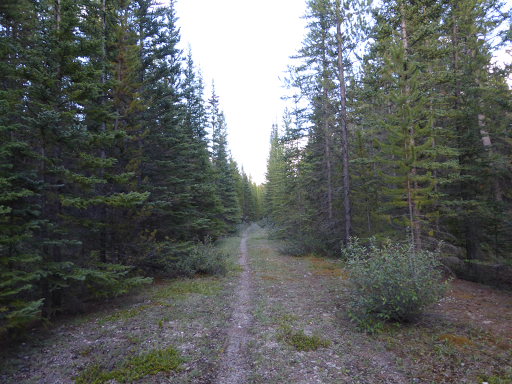 We left at 7:15pm and hiked about an hour until we came to a great stretch of trail overlooking the North Saskatchewan River. We couldn’t resist and camped closer to the trail than we would normally, but it’s well worth it! Few mosquitoes and a nice summer breeze. 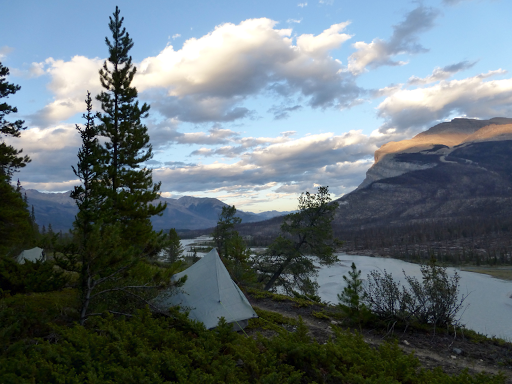 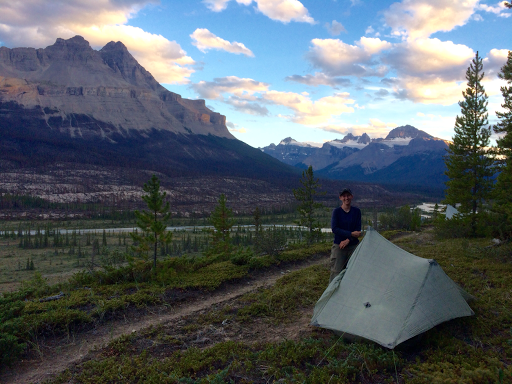 It was tough to find trees to hang from tonight, so we did the best we could with what we had. 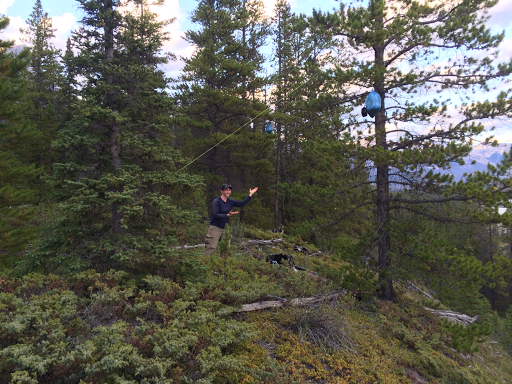 Another great day and hard to believe we hiked so much considering the big break the second half of the day.