Day 31: Walking With Others

It rained on and off in the early morning and I didn’t get a good nights sleep. I was in one of those deep sleeps after waking up well before my alarm when I heard a rustling at the back of the tent that made me shoot up. I was disoriented and what I had heard was the front of my tent. It was E placing my food bag under my vestibule at 5:10am and it was sprinkling outside. We had agreed that today we’d each do our own thing in the morning and meet at lunch at a viewpoint to get some solo walking time. We are now in Jasper National Park and most of the trail is smooth and clear. E just happened to wake up early and decided to get the food before the rain came down too hard. She started packing up and I went back to sleep. Then the rain really came down and I kicked myself for not leaving earlier like E did. It’s no fun to take down a tent in the rain. I packed up and just as I began to exit the tent, the rain stopped! I heard something and it was E. She hadn’t made it out before the hard rain and also waited for it to lighten up. She was still getting organized when I hiked out, stopping at the bathroom on the way out. We weren’t sure who would be out first, but agreed to still meet at lunch. 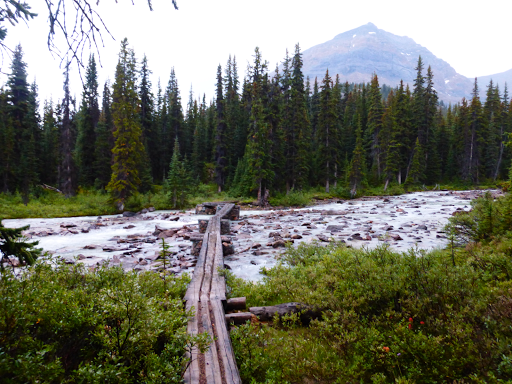 I hiked out just after 6:30am and it started raining more as I hiked down through a forested area that had thankfully clear trail. It was 48F/8.9C, so not terribly cold rain, but enough to keep moving. About 2mi/3km later was a campsite that our guidebook said had a register. I checked it and saw the last entry was Gian and Laura who we met on Day 1 and have been very close to seeing again. The entry seemed to indicate that they camped there and might still be at the camp. I walked around the full site and asked a few people with no luck. I figured maybe they had already left or hiked a bit further yesterday and hiked on. 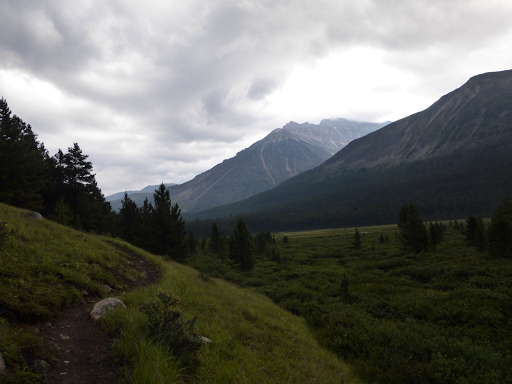 It rained on and off and I was in waist high brush for short periods, but the rain pants got quite soaked by it. The rain let up and soon the trail entered the open valley I’d be hiking the rest of the morning. Really peaceful, spacious, and relaxing to walk through. Plus, exciting to see blue sky and white clouds when I was prepared for a day of gloom. 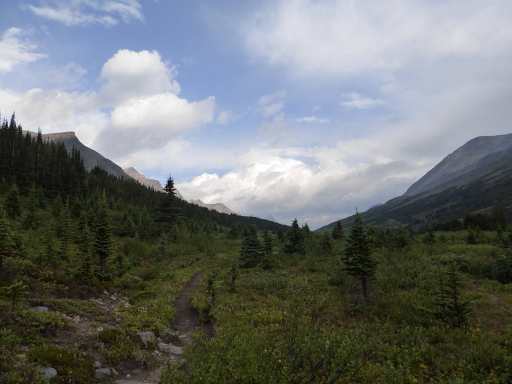 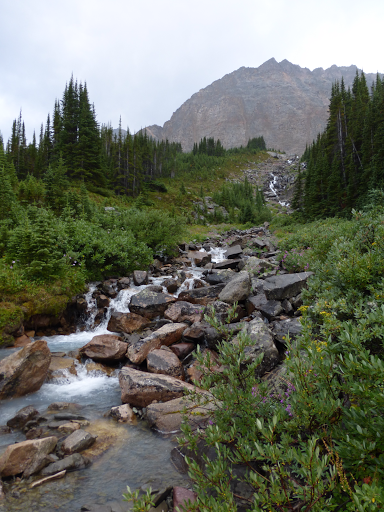 Around 9:30am, I deemed it safe and warm enough to take off the rain gear. While I was doing that, I saw E approaching from down the valley and waited for her. We took the opportunity to dry out our tents in case the clouds returned. I was surprised I hadn’t seen anyone all morning and commented on that and then we heard what sounded like someone yelling further back on the trail, but didn’t see anyone. We hiked on down the valley with great trail towards Jonas Pass. 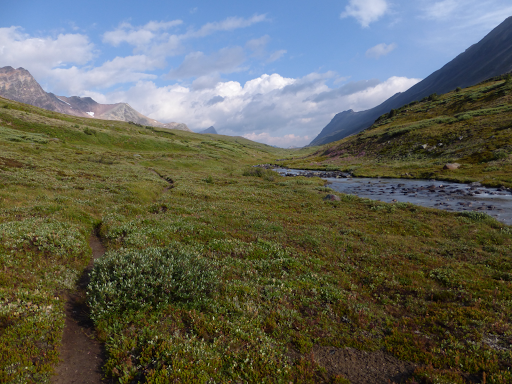 I started listening to the audiobook of “Outlander,” which my stepsister gave me. I tried to listen to it once on the Hayduke and didn’t have the focus needed and put it to the side. I’ve since heard good things about it and have decided to try again. I listened for a short while, but it’s still in the intro stage, so no opinion just yet. 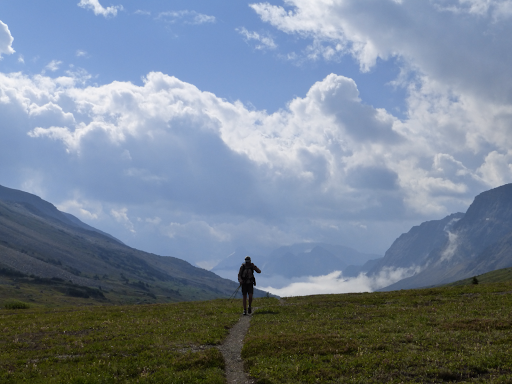 Jonas Pass was less significant than I imagined. There was a cairn to mark it, but otherwise, I probably wouldn’t have noticed it. 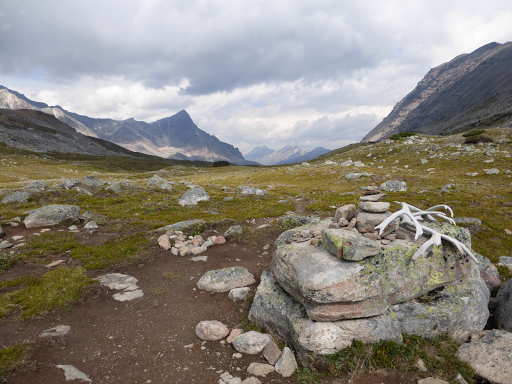 From there was a short, but somewhat steep climb up to Jonas Shoulder, our lunch spot destination. 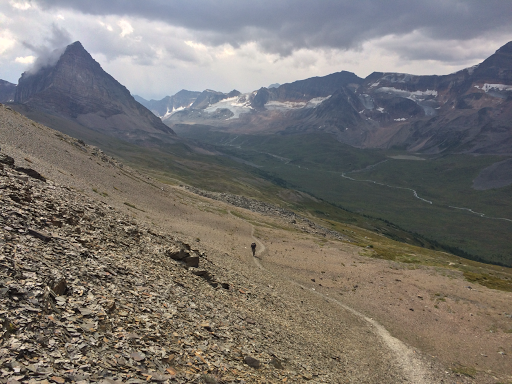 Dark clouds were overhead and we decided to go for lunch hoping it wouldn’t rain…ten minutes later bits of sleet/snow began to fall and we packed up all but our food in case it got worse. Fortunately, it passed and we were ok. 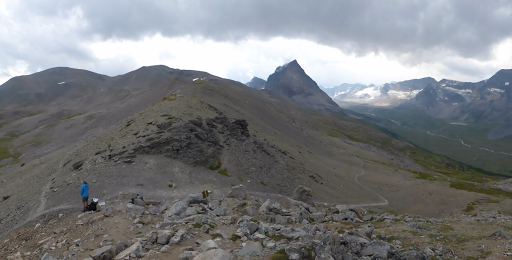 While we were there someone came over the shoulder…it was Gian and Laura! They were at the campsite this morning and they heard I was looking for them, so they packed up and hiked to hopefully catch us. That was them we heard yelling while we were drying our tents, ha! It was really great to see them! We’ve been following those waffle prints for a month since we last saw them on Day 1. 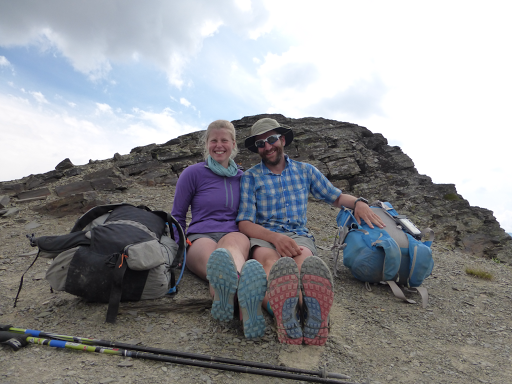 We all hiked together the rest of the day on a gradual down to camp. The day flew by with conversation the whole way. 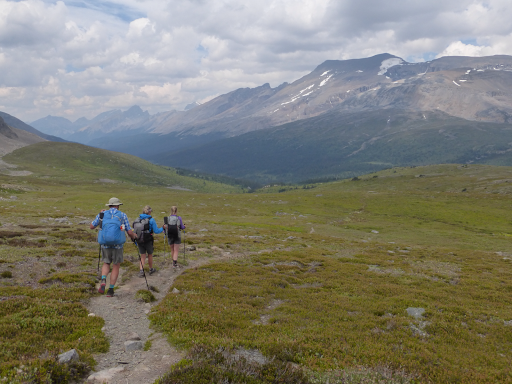 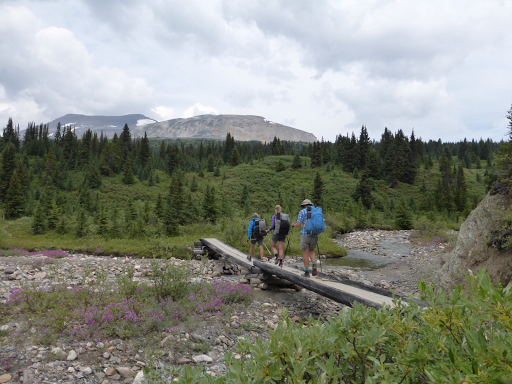 Good times and great to have the company in this stretch which was sparse and fairly plain woods. This is supposed to be a popular area and we saw just one other couple the second half of the day. 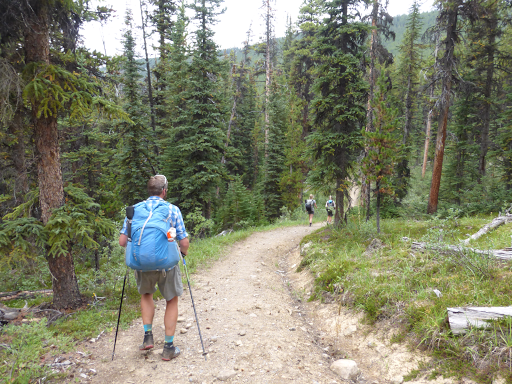 Before we knew it, we were at camp at 4pm. We were at Waterfalls camp and there is a nice falls and stream visible from the eating area. We had a leisurely and early dinner with a nice view and some sunshine even breaking through. Gian and Laura carry something like those bug candles and it worked like a charm as we say there for a couple hours without mosquitoes all over us. This is the most mosquito filled spot so far probably, but still not enough to warrant bug spray or a head net. We’ve been real lucky with that this hike! 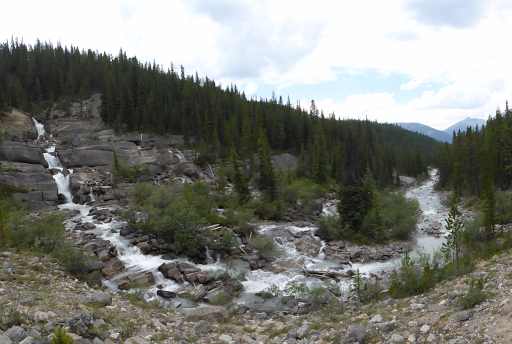 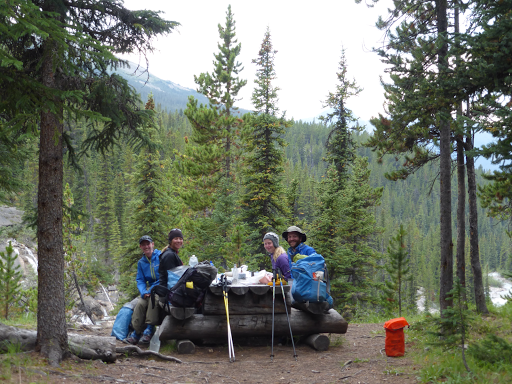 We found out that the “EII” sign in rocks yesterday was not from Gian and Laura, but the “Happy Trails” in pinecones on Day 4 was from them, ha! We turned in early and it started to rain a bit. Perfect timing! I’ve finally caught up on blogging as I keep falling asleep before I finish each night. Hoping for another mostly clear day again tomorrow… 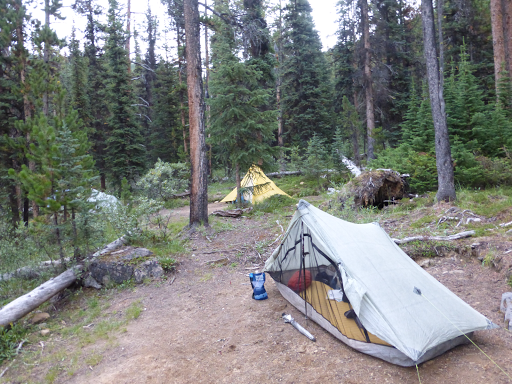 One side note, I mentioned yesterday that I had dropped my favorite beanie on the trail and that I hoped fellow GDTer Ted picked it up. I messaged him through my Delorme InReach and he already messaged back that he has it! Great news! The bad news is that he is in Jasper early due to an “accident” that he’ll elaborate on later. Hoping all is ok and we should be able to check in with him in a few days in Jasper.