Kakwa Lake(734mi/1181km)-Bastille Creek/Walker Creek Rd(752.6mi/1211.2m)
Daily Distance: 18.6mi/30km
Campsite Elevation: 3150ft/960m
I woke up at my regular 5:30am naturally to hear the wind gusting and rain pelting the cabin. Man, how great to be warm and dry on a night like that! I rolled over and slept for another hour and then blogged until everyone woke up. At 7am our time, 6am BC time, Jim put logs in the wood stove and it was sooo toasty warm. We leisurely got up and E commented that we are officially on BC time, which needed to happen eventually and the extra hour of sleep was wonderful! We ate breakfast (including the nectarines Irene gave us last night!) in the cabin as the rain and wind continued outside. Such a treat! It was 35F/1.7C when we pried ourselves away from the warm dry cabin to start our walk out. The rain was very light and we could see some of a newly snow covered Mt Ruth in the distance. 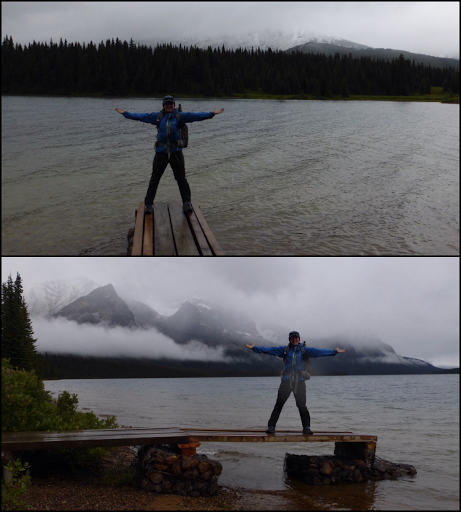 We couldn’t believe our timing on this whole hike for weather. We had some rain, but nothing that prevented us from seeing anything or that put us in the hypothermia range for an extended period like some GDTers experience. Had we been just one day later, there is no way we would have done the high routes we did yesterday. We could see snow on the exact route that we were on. Cy told us last night that this is reportedly the driest summer in Canada since 1880!
So, as for getting out of Kakwa Lake…a big reason many GDTers choose not to end here is because there is an additional 18mi/29km to even get to where a car can pick you up…and that point is still 45mi/73km from the highway on a very old rough road that takes 2hrs to drive. Few people make the effort to come all that way. Cy and Irene were helicoptered in and Jim and Marilyn flew in on their float plane. In the last three weeks, Cy and Irene say they have seen 7 groups. This is more of a horse packing area, so many ride horses in. It is also one some mountain bike in, but few make the effort to hike that far. It is more used in the winter with snowmobilers. 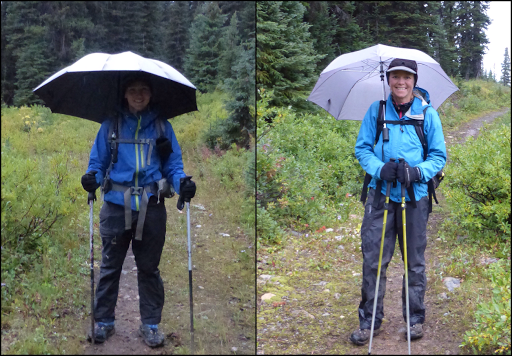 We are incredibly fortunate because we originally planned to walk out the full 63mi/101km, but got an offer from some blog followers, Pete and Carol, to be picked up 18mi/29km into the walk out. Pete and Carol live in Prince George, a four hour drive to where we will end tonight, and contacted me just before the hike about possibly picking us up. We have been able to communicate through our InReach devices this leg and it’s going to work out perfectly! It is thanks to Pete and Carol that we didn’t have to walk the road and had the extra time and energy to do the high route alternates we did this leg. Such a great gift! 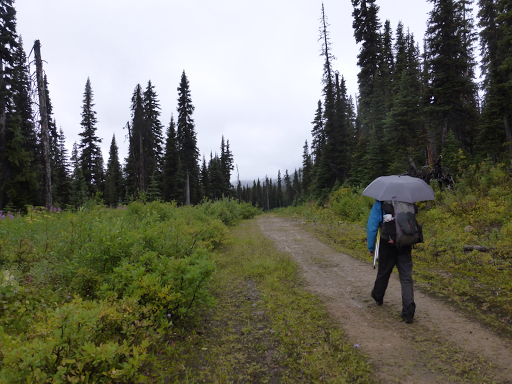 So the plan is to hike today to the first point that a car could pick us up, which is Bastille Creek on the Walker Creek Rd. It rained lightly for a couple hours this morning and then cleared up to be a great day. I listened to more of the audiobook of Outlander most of the day and the time just flew by. Although it is a rough old road, there were still views to be had through the trees and later along the McGregor River that the road follows. E and I spread out, walking on our own most of the day just a bit apart. It gave us each a the time to reflect on the hike and to think about what’s to come. I’ll talk about that more tomorrow. Those of you that have followed the blog all summer know I finished both the Hayduke and Tahoe Rim Trail with rainbows at the end. Check out the rainbow I got a peek at through the trees today! Perfect:) 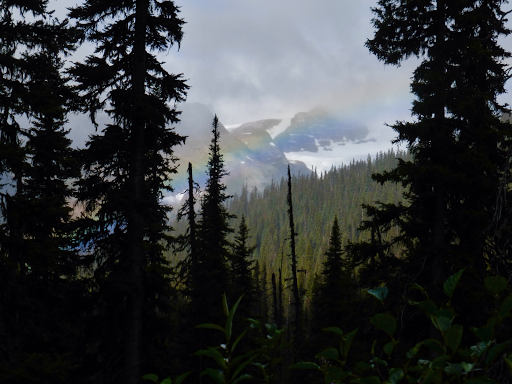 People have done various things to make the road more usable laying out branches and such over some muddy spots. Old decaying bridges were still walkable. Other spots, there were big puddles, and we were able to find ways around them. We’re sure this road is much much dryer and easier to walk this year than most. We did meet two mtn bike riders riding in to stay at the cabin. 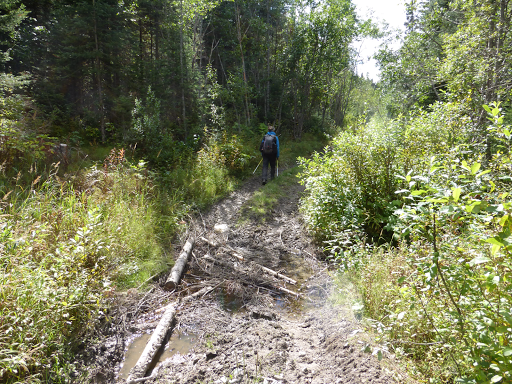 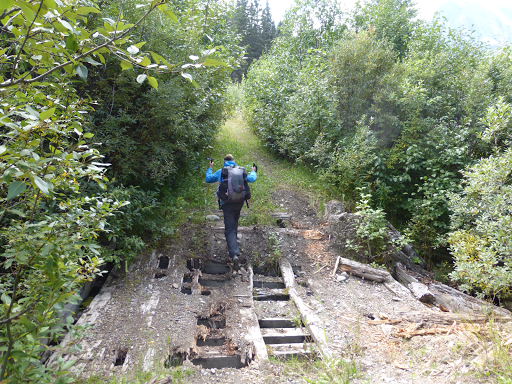 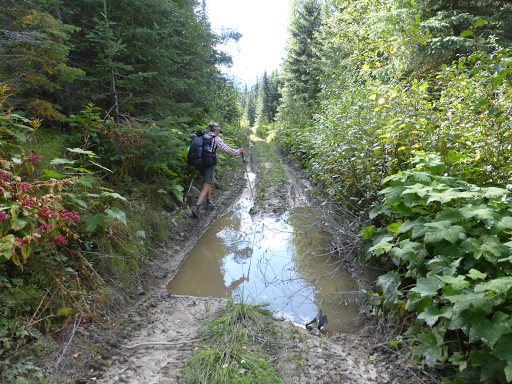 We pretty much kept dry feet once the rain stopped except for a stream crossing at Buchanan Creek. We had plenty of time and took over a two hour lunch break there. I did some blogging and E got a power nap in. Nice final lunch spot! 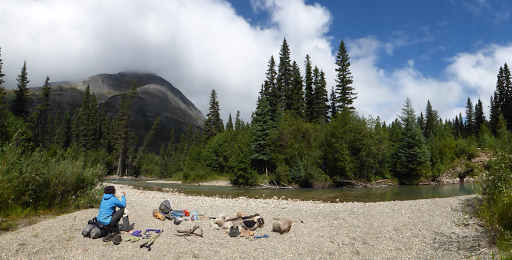 It was not far to our final stop at Bastille Creek Bridge and we were there at 4:30pm. Along the way, we got nice views in openings of the trees along nicely the McGregor River.

We had plenty of bear prints in the mud along the road…still no sighting:/ 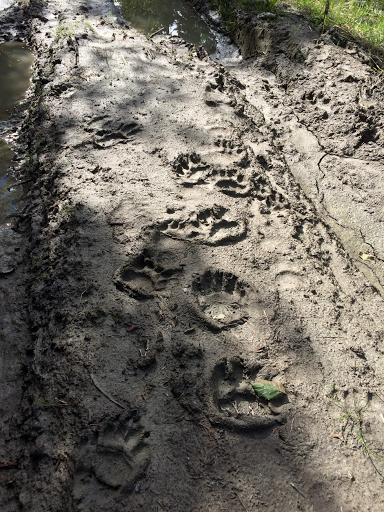 There were a few cars parked there and we met Guy(a local trapper) and his nephew Michael who were there in his nearby cabin. The camp here is right by the parked cars and covered in horse and other animal droppings. It smells like a farm, but nothing we haven’t camped in along the Continental Divide, so it was fine and had a nice mountain view. 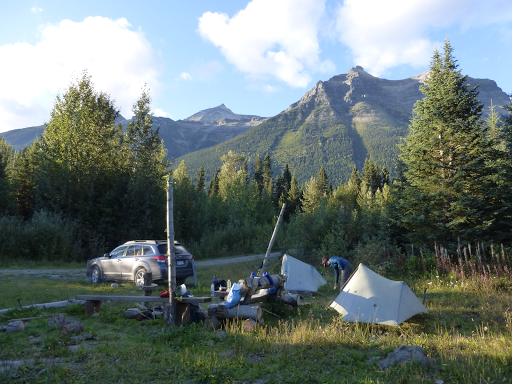 We had a nice area to hang out and enjoyed relaxing. Neither of us are much for fires, but we did have funk with a ceremonial burning of the maps and papers we were carrying. This area is said to be frequented by porcupines that eat everything, so some cars use chicken wire around their tires to keep them from eating the rubber. I’m more worried about animals overnight here than all hike! 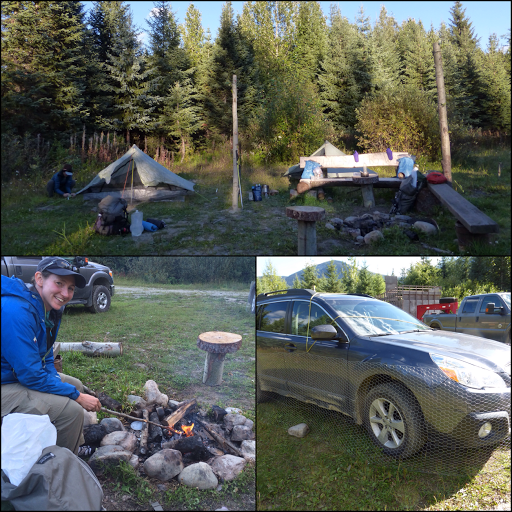 It’s pretty damp and pretty cold already down in the valley near the creek. We’re prepared for frost overnight and I’ve put everything in a dry bag to hopefully cut down on the wet stuff. This is it! We’re done walking! Tomorrow, Pete and Carol pick us up and we head to Prince George where we will spend the night and both have flights out to our respective places I’ll elaborate more on tomorrow. It still hasn’t hit me this one is over…such an amazing trip! We did have to take one last photo with our honorary third hiking partner…Will-Sun! 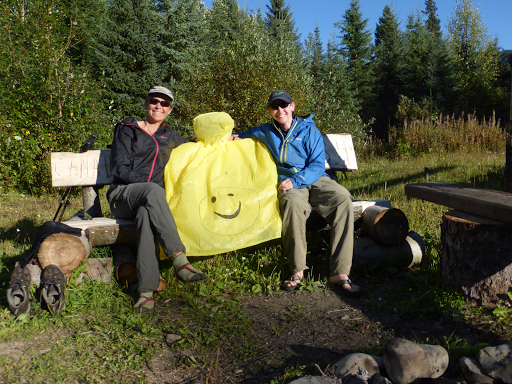 He hung in there and was quite the ray of light so to speak. We had our differences at times with his relentless grin as I bushwhacked through wet brush, but I know he meant well. He was quite the companion for E who found him along a dirt road on our ninth day out. He kept her warm and survived in the brush and she taped him up dutifully in towns. Will-Sun also made for a great sit pad on those muddy breaks and even worked as a wind shield in E’s tent one of these last few nights. I’ve grown quite fond of Will-Sun and the light he brought to those dreary days. He was a great hiking partner! Tomorrow…the drive out of Walker Creek Rd…