Day 6: Looking Up, Going Down

Town day! We had one pass on the SHR to get over this morning and then another on a side trail to resupply. After yesterday, I think we all were just hoping all would go smoothly and we all were ready to rest up in town. I woke up with a whole new ailment. My bottom lip was swollen to twice it’s regular size. I mentioned it as I packed up and Rockin’ said she had the same thing. It was apparently a sunburn from the sun hitting the inside of our lip as we must have been hiking with our mouths open gasping for air yesterday. Jeez, one more thing. The sun and the reflection off the snow is intense. I’ve been covering  up more each day.

I was a bit nauseous and still not 100% (not sure I ever will be up high) as we headed toward Knapsack Pass. Fortunately, there was little snow and we were able to find the use trail that led us over the pass. I forgot to get a photo from the bottom, but here’s one from the use trail when we were about parallel to the pass. 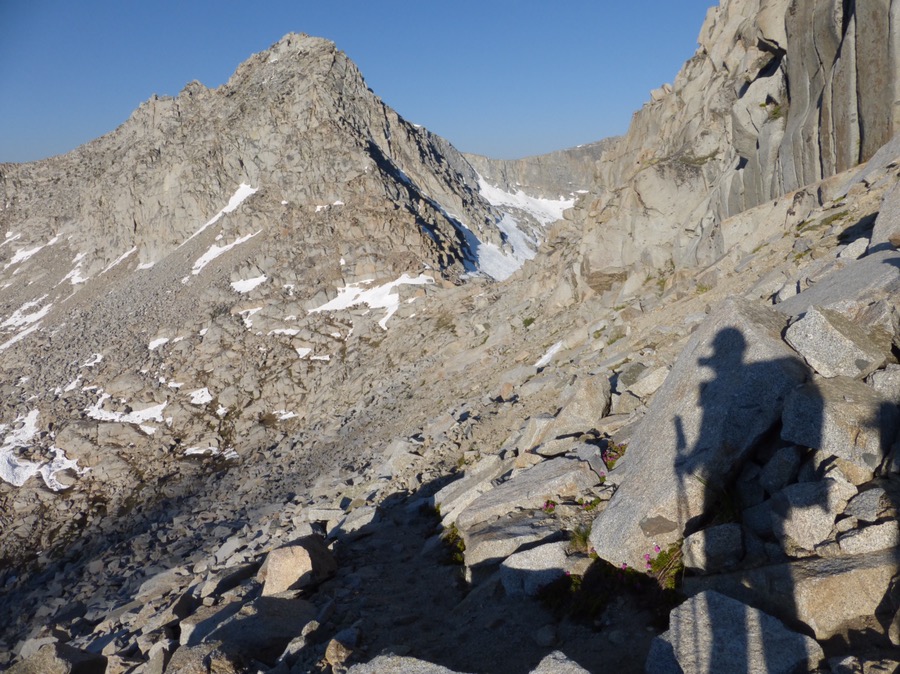 Once on top, we could see down into Dusy Basin, and in the distance, LeConte Canyon, where we’ll be headed. Notice the haze. There are multiple large fires all around the area. Turns out this is a record early occurrence for fires out here as it’s normally the second half of the summer. It’s pretty sad and unfortunate. 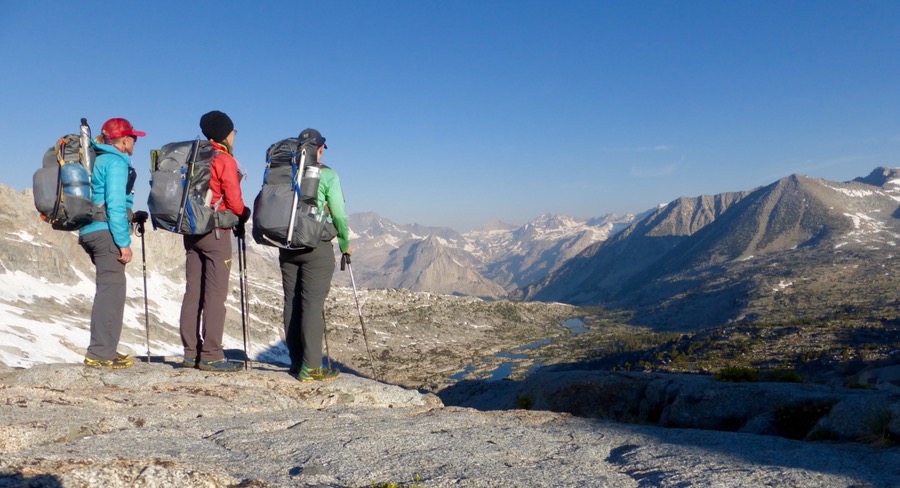 Eventually, we will head towards LeConte Canyon, but for now we are headed to the right (east) over Bishop Pass to resupply. 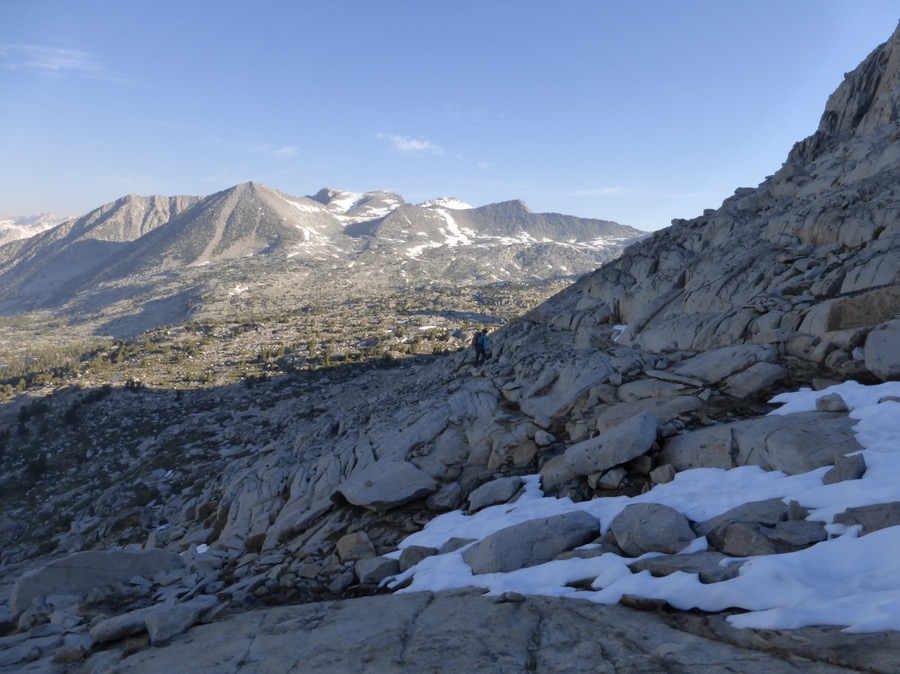 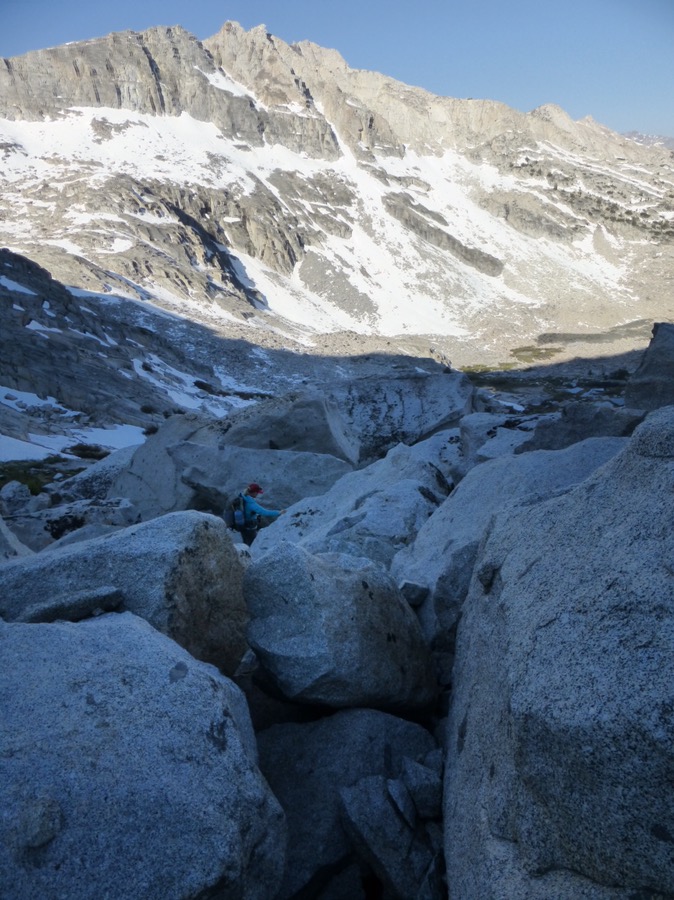 Rockin’ in her element of the Volkswagen sized boulders.

Our route intersected the Bishop Pass Trail and we took it the rest of the day down to Parchers Resort, where we planned to stay and had our resupplies mailed. 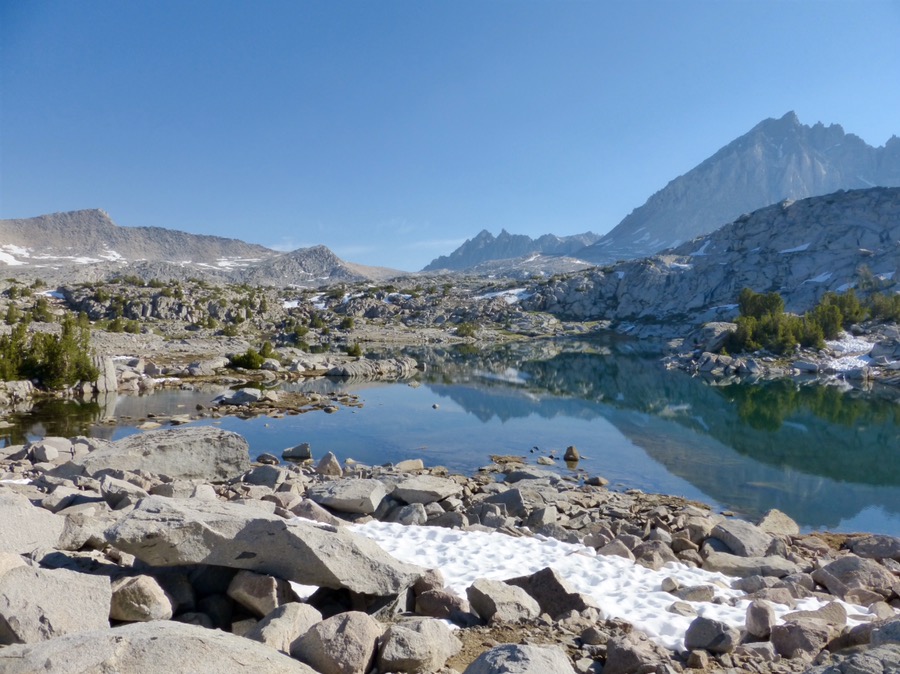 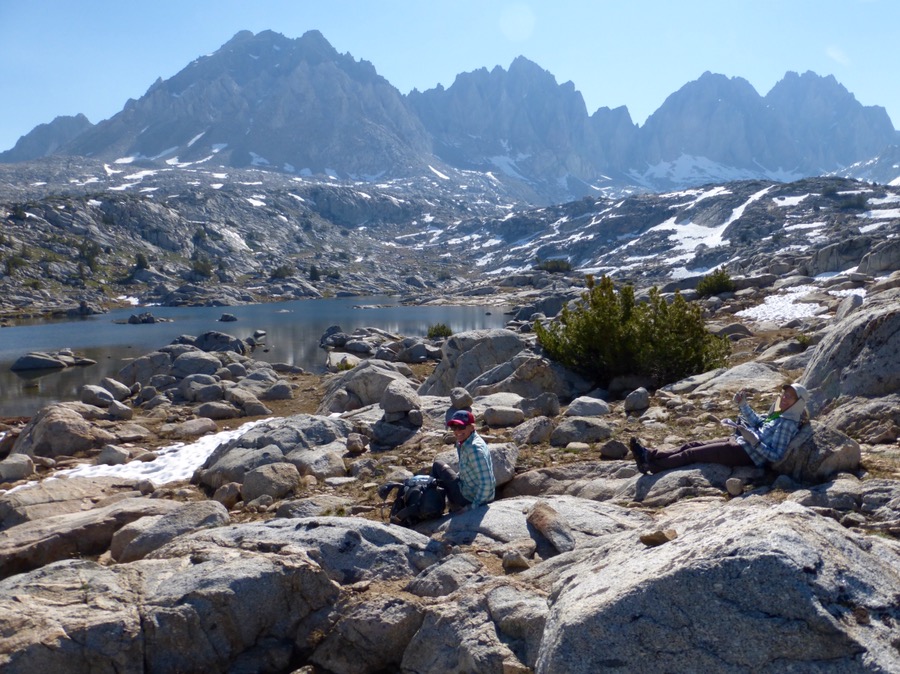 Here’s the catch. Well, actually a few catches: We are a half day later than our goal of making it to Parchers for their awesome Sunday morning brunch. Parchers has very few other options for real food. Rockin’ has a sinus and chest infection (had it before starting the hike) and needs to rent a car to go to her home in Tehachapi (4hrs away) to get some antibiotics. We want to rest and take a zero. All of these things added up to not staying at Parchers and choosing to hitch 30mi to Bishop.
So before I get back to that, let me talk about our experience on the way down the 2,100ft Bishop Pass Trail. First off, we weren’t sure how far down it was, so we asked the first hiker we saw coming up. Turns out, the hiker was a PCT veteran who I was familiar with. This hiker, who will remain unnamed, openly admits (and admitted as we spoke today) to having a lot of anger and negative energy. We only spoke for a few minutes, but his energy (nothing to do with us) was not good and Rockin’ even openly told him that we didn’t need his energy on this route and that he had a lot of anger (yes, another reason why I love Rockin!). After leaving him, I was ahead with Rockin’ and within a couple minutes we saw another hiker coming up. I told Rockin’ I wasn’t going to make small talk after that last experience, so we just said hi to the woman as we crossed paths. As we crossed, it struck me that it was a much older woman who I would have liked to talked to and I was mad that the other guy put me in a mood to not talk to her more.

I immediately thought of a woman who I’ve been in contact with the last few months. Her name is Nancy Pallister(aka Wandering Daisy) and she pretty much wrote the bible on the Wind River Range in Wyoming, which is where we are headed after the SHR. We’ve emailed back and forth with her about route choices and it turns out that Nancy actually lives four miles from Why Not. She and Why Not met a couple of times to discuss our route options and we knew Nancy was going to be in the Sierra and Winds also this summer. I really wanted to meet Nancy, but chances were low that it would work out. Anyway, all this ran through my head as we crossed paths with this woman. As soon as I passed her I wondered where Nancy might be. Then a few seconds later we heard Why Not at a switchback above us greeting the woman. It was Nancy Pallister!!!
I was elated and love the fates of things. If all our little time eaters and route decisions and ailments hadn’t happened, timing would not have worked out to see Nancy and sit and talk with her for 30mins right near the top of Bishop Pass. We were right where we were meant to be all along. I can’t even tell you the boost it gave me just to be in her presence. She’s done all of the SHR and knows every inch of the Sierra it seems. Nancy is 67yrs old and has done badass mountaineering for over 50yrs. She was a relaxing energy to be around. It was such a contrast and swing in energy from the interaction we had just had with the other hiker and I kick myself for letting that negative experience shut me off to the next person that was hiking towards me. Nancy now loves to go up to places for a week (or more even) and just take it in. Hike to each nook and cranny, go to the lakes, and fish and relax. While we were with her, Why Not quoted something I said yesterday after our stressful scary experience on Potluck Pass. I said, “I really think I’d rather just be in the Winds and do what Nancy Pallister does and take her book and explore all those places she has in there.” And now here we are right in front of Nancy as she’s doing just that in the Sierra! I’m telling you, that made this whole leg worth it and was infinitely better than any all-you-can-eat brunch. 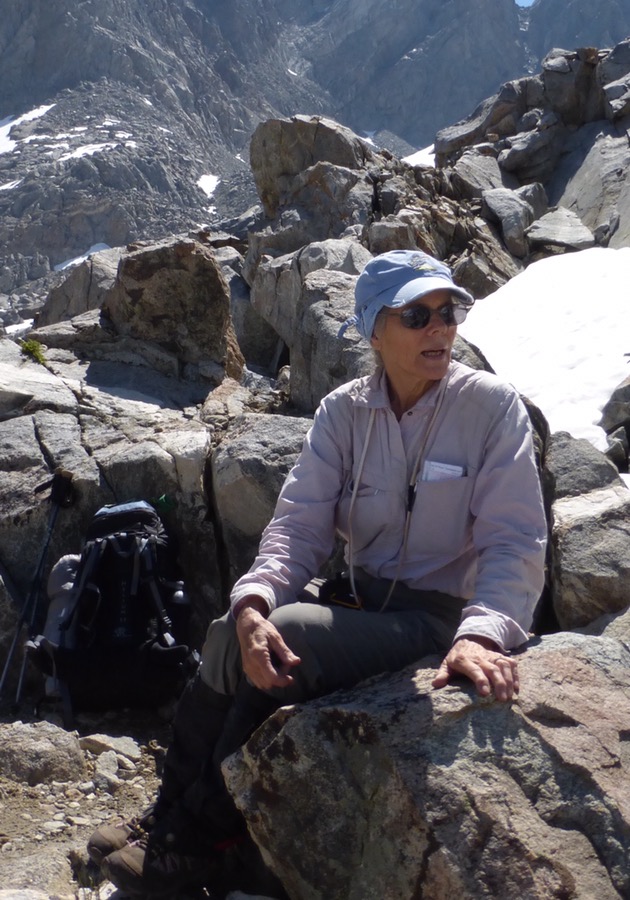 As we talked to Nancy, maybe I was just hearing what I wanted to hear, but I was motivated to keep going. Just an hour before, I was asking Rockin’ if we should consider waiting a week or two for snow to melt. Now, after talking to Nancy, my gut feels like giving it a shot. Man, what a boost and what a cool woman. 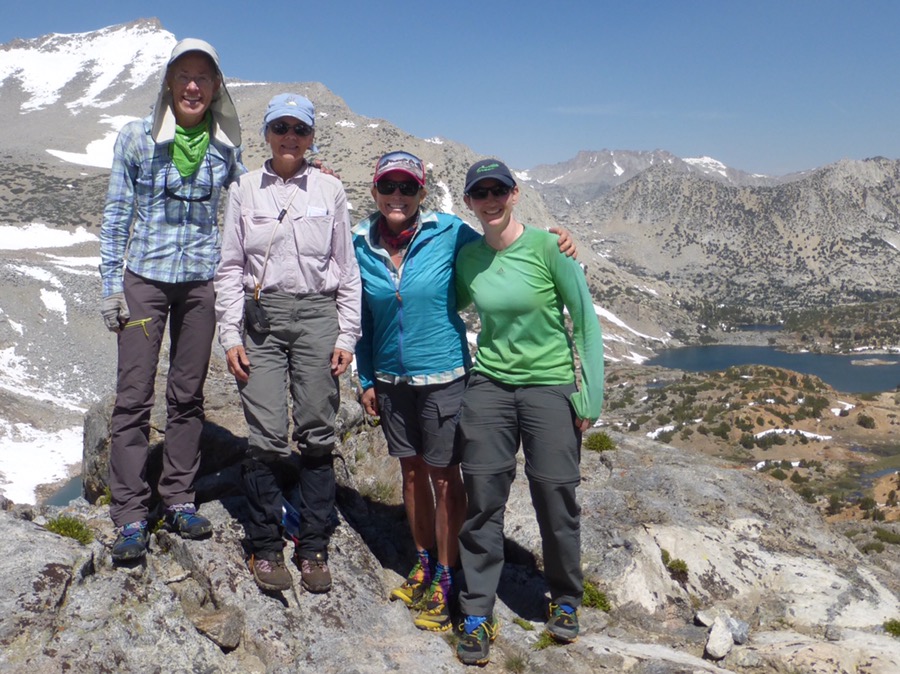 We parted from Nancy and the 5.5mi trail that went down just 2,100ft felt like 8mi and over 3,000ft. We all felt like it was never going to end and it must be miscalculated. We are also going to come back up this same trail with a weeks worth of food. We took a break about an hour before the end and got yet another boost. A group was there studying the beetle population on some of the trees or something. They were super friendly and had students and the leaders of their groups talked with us. It turned out the woman was the biology chair at the university that Why Not graduated from in 1975…and Why Not had been a biology major! Just wonderful coincidences! We also met an Israeli PCT hiker with a great spirit. Having hiked the PCT, we knew that there tend to be a good representation of Isrealis on the PCT. He said there is even a 2016 Isrealis Facebook page. Yep, that’s how big the PCT has gotten!
We got to Parchers after a 1mi or so hitch and paid them for our boxes since we decided to go to Bishop instead.


The next challenge was to get a hitch the 30mi to Bishop. It was HOT and we took turns trying. It wasn’t a super busy road and each car was either full or not headed our way. Check out the two strategies in myself and Rockin’s hitching. Notice, she is also using the 1lb fold up seat Why Not found on trail and packed out. That thing came in handy the last few days! 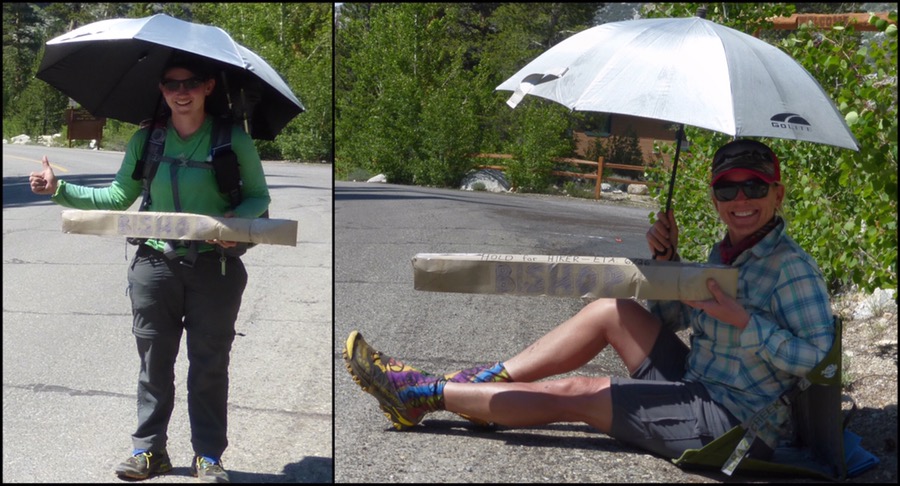 So who do you think got a car to pull over?? 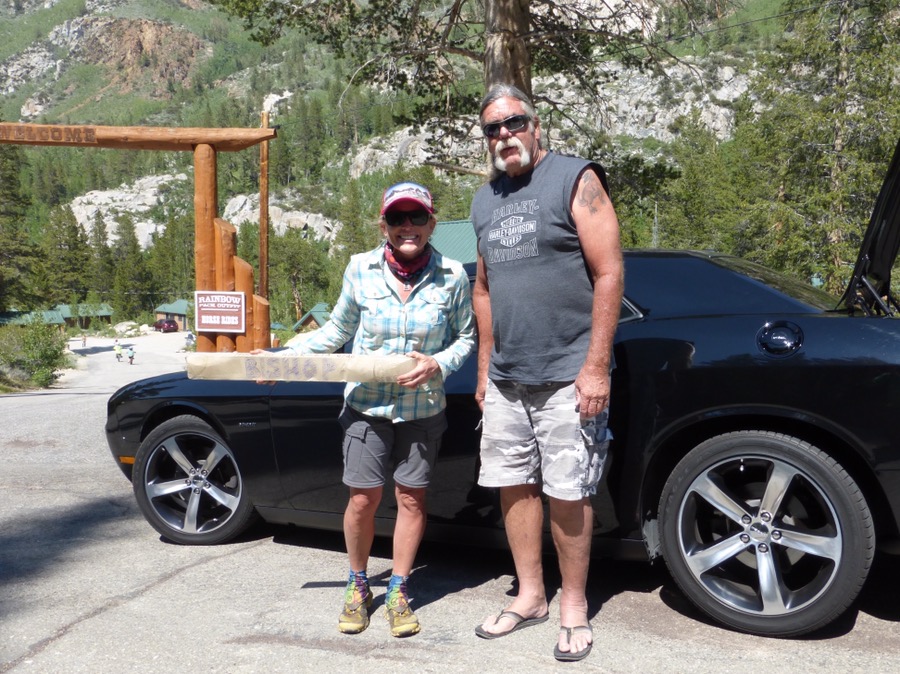 Yep, Rockin’ with those legs of course! Meet Rex with a T-Rex tatoo.

Rex gave us a ride and somehow squeezed all three of us, our packs, and our resupply boxes in his speedy little car. We made it to town around 4pm, had dinner, checked into a motel, and did some chores and blogging before retreating for the night. Tomorrow is a much welcomed zero while Rockin’ heads home to Tehachapi for some antibiotics and hopefully will be clear to return the next day. It hasn’t been affecting her energy and she’s doing great out there, but it feels terrible and she is losing sleep coughing at night. Plus, you don’t want to mess with upper respiratory stuff on a high route like this. It’s serious stuff. We’ve got our fingers crossed and will find out tomorrow how it’s all going to go. Man, what a day. Something tells me I’m where I should be and to give this another shot on northward.