Our big pass of the day was Feather Pass. It’s generally a pretty straightforward pass, but of course it was overcomplicated by the early season snow still on the pass. We started out the morning dropping down into forest to a ford of Pine Creek. The dry shoes didn’t stay dry for long! 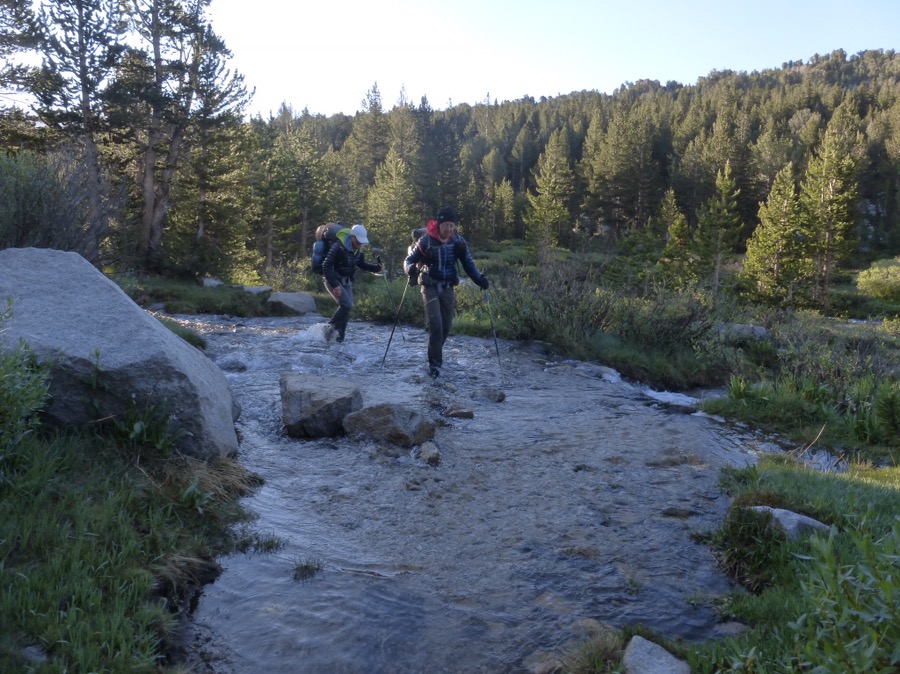 This isn’t the ford, just waterlogged trail near the creek.

Then we followed a light use trail through forest to the beautiful and remote Merriam Lake. On the way there, we had many more stream crossings and my broken pole end dislodged into one of the streams, dang! I knew it might not last. Good thing is that Rockin’ actually had a pole that had been run over by a car a year ago that finally bit the dust. We both carry the same poles, and she still had a surviving section of what I needed, so thankfully, I still have two poles. Rockin’ doesn’t mind hiking with just one and has been doing that most of this trip. 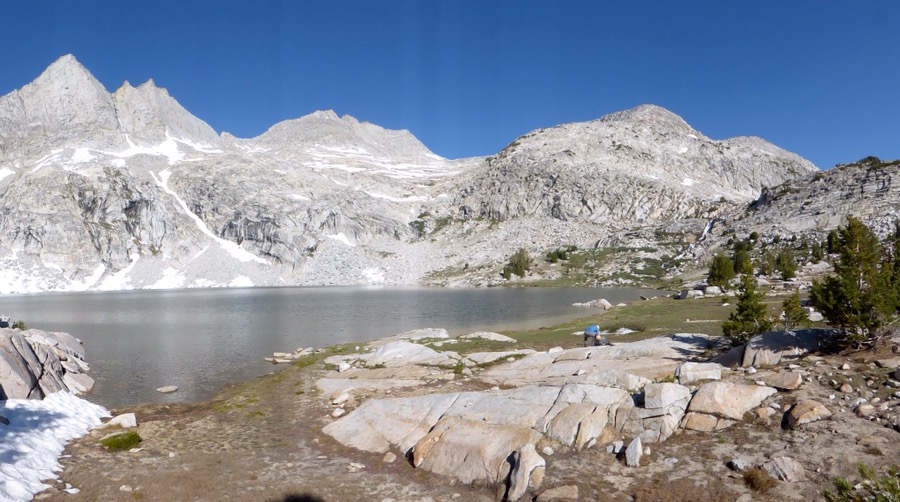 Merriam Lake. We climbed up next to the waterfall (right side) to head to Feather Pass. 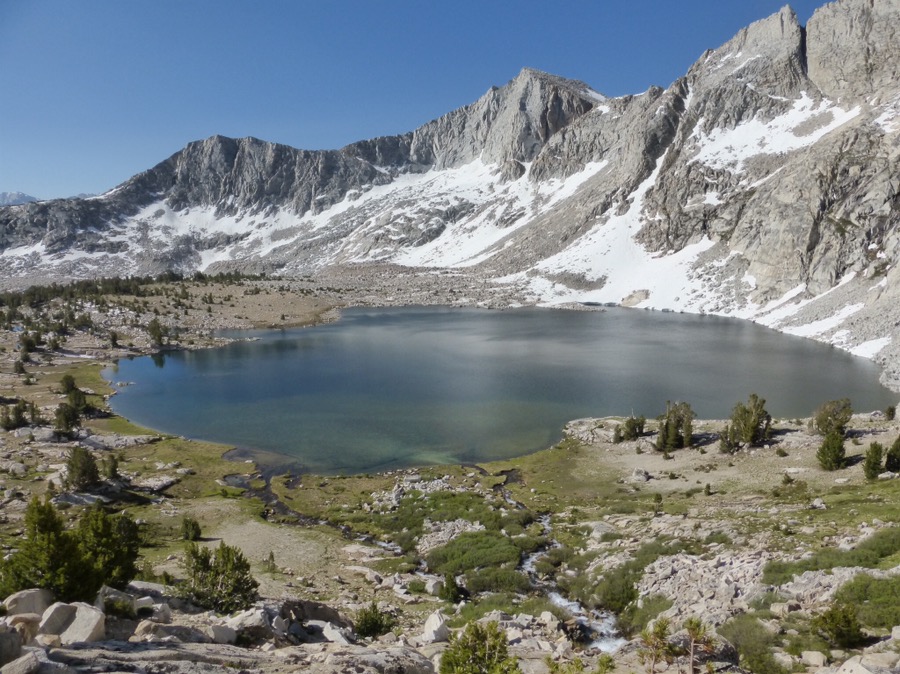 View of Merriam Lake from the top of the waterfall. 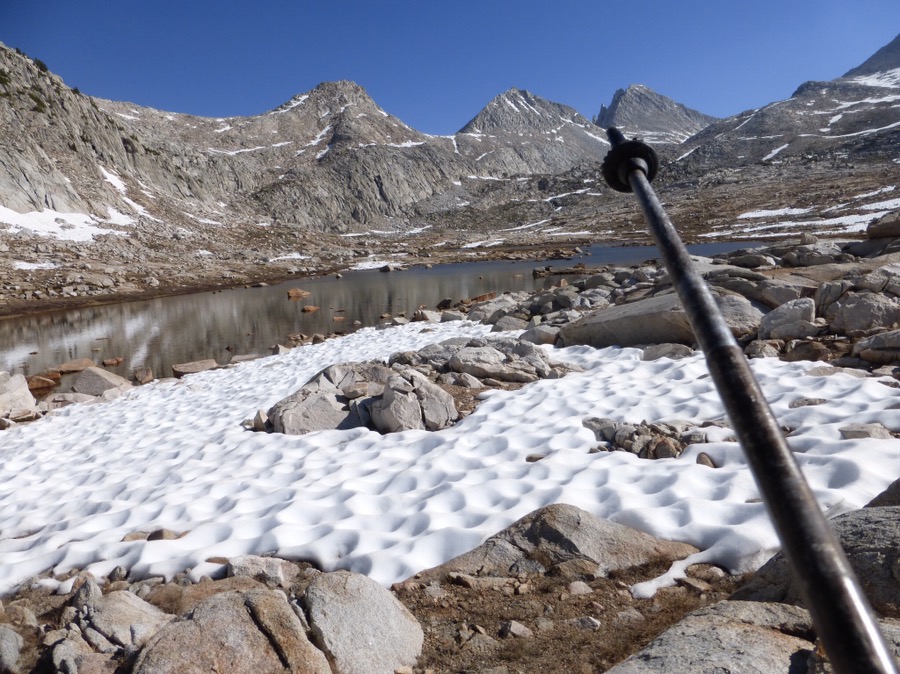 As we continued up, we passed many, still thawing, lakes and tarns. Feather Pass is one of the highest passes at 12,375ft and we had plenty of snow to contend with. We had to repeatedly go from snow, to rock slabs, to scrambling and are getting pretty quick with the transition from microspikes to none and using hiking poles or storing them away. 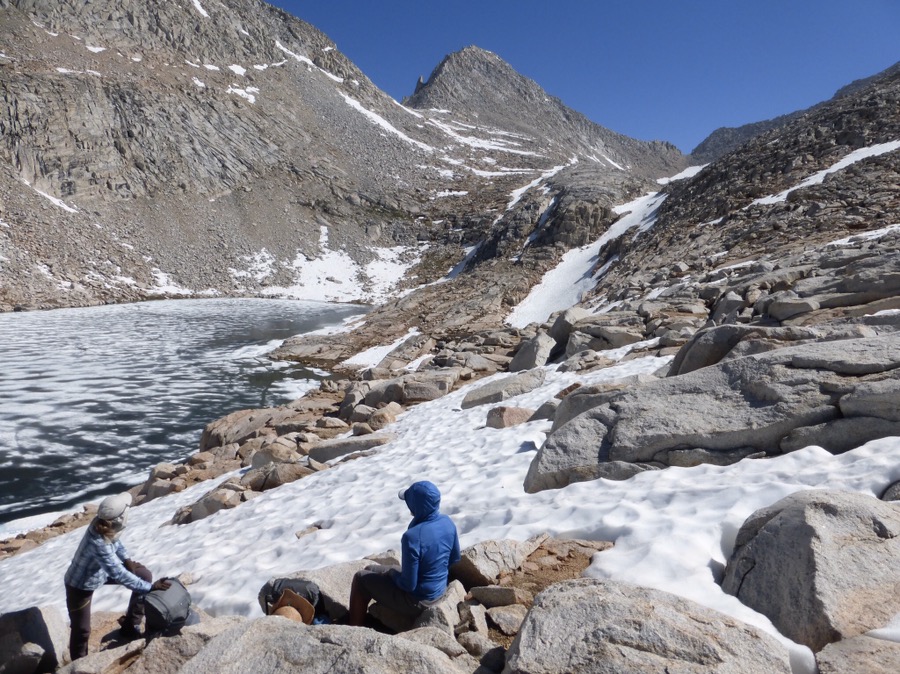 Getting microspikes on for the snowy section.

We wanted to avoid the terrifying Potluck Pass situation we had back on Day 5, but came close as every safe option kept getting more and more sketch because of the snow and how it was limiting our options. It was funny that just as I’d think that we chose the oddest route, we’d see prints in the snow from Ulrich (other SHRer) or the other guys we saw doing a section, apparently having the same route choice dilemma. Thankfully, we were able to find something that worked. Rockin’ tends to take the lead scouting out options and scrambling around on the rock (hence the trail name), and she did a great job of finding a route within the comfort zone of me and Why Not. It probably took us an hour longer than it normally would have without the snow. 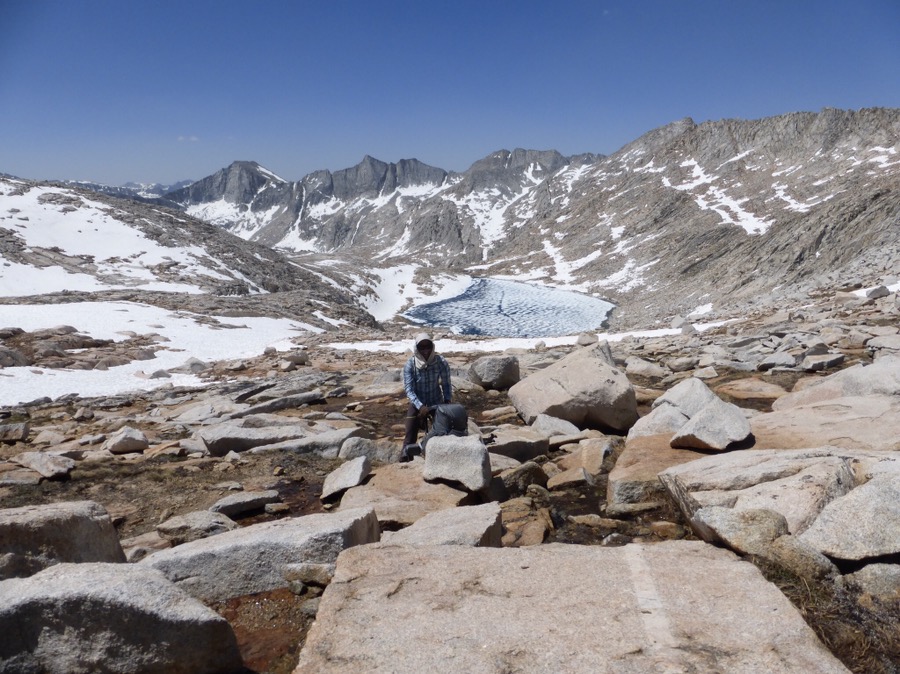 Looking back as we neared the top.

When we got to the top of Feather Pass, we were excited to be dropping into the remote and beautiful Bear Lakes Basin, but looked over to see it covered in snow. 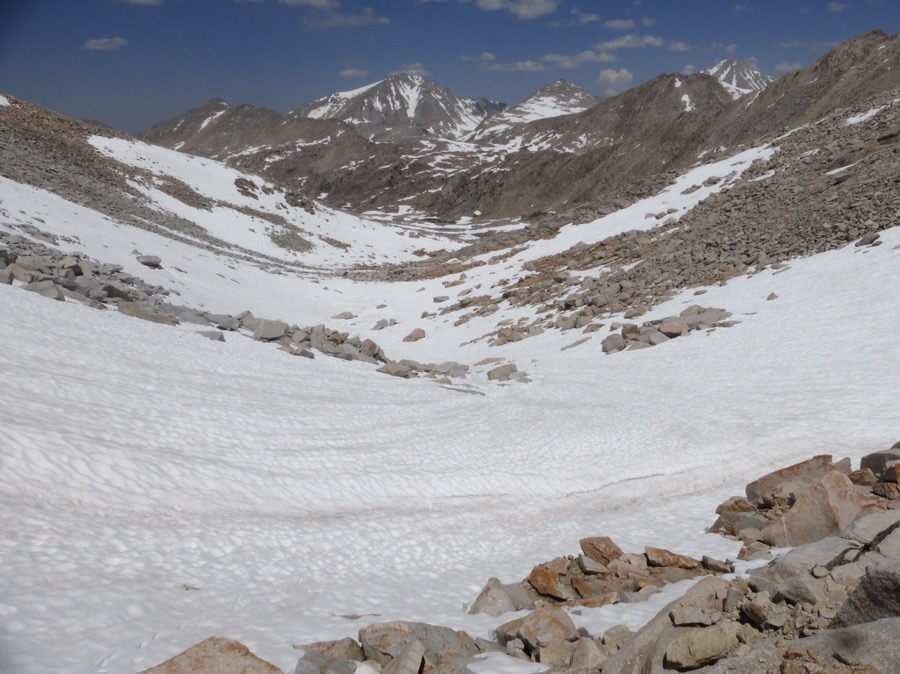 The snowy north side of Feather Pass dropping into Bear Lakes Basin.

Rockin’ has done the SHR in sections before and said we normally would have looked out over a field of massive boulders. It was creepy to cross over that snow imagining what was underneath and not sure of where it might cave. One thing that helped was that we were able to see the footprints from a pair of guys that are doing a section of the SHR that are ahead, of us. We could walk on their compacted steps and also see where they postholed and avoid those spots. 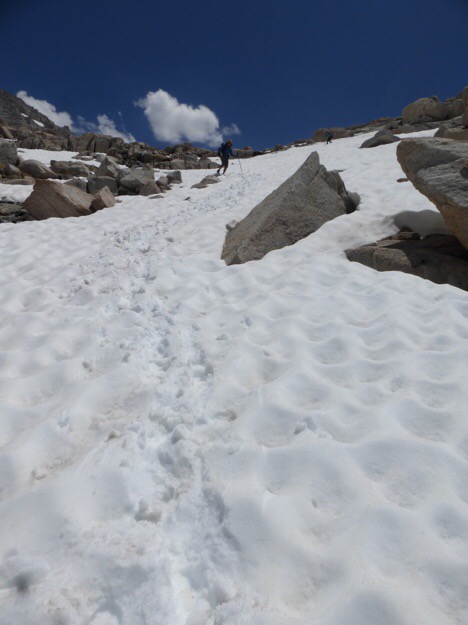 Some of the stretches were steep. 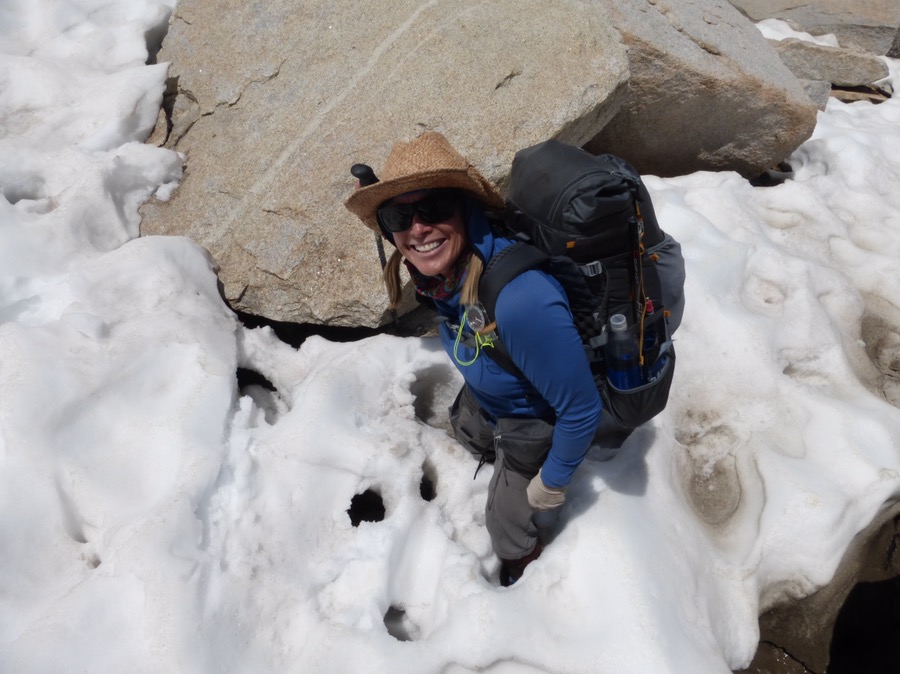 Postholes from others and Rockin’ went in as well.

Lunch at reflective Bear Paw Lake. Feather Pass is the dip on the left side.

The next pass of the day was White Bear Pass. Yet another fairly straightforward pass that was a bit more time consuming because we needed to negotiate around snow. First up, on the way to White Bear Pass is a viewpoint that Roper (guidebook author) says is possibly the best on the whole route. Personally, I feel like many of the Sierra views look similar, but this one is pretty nice. 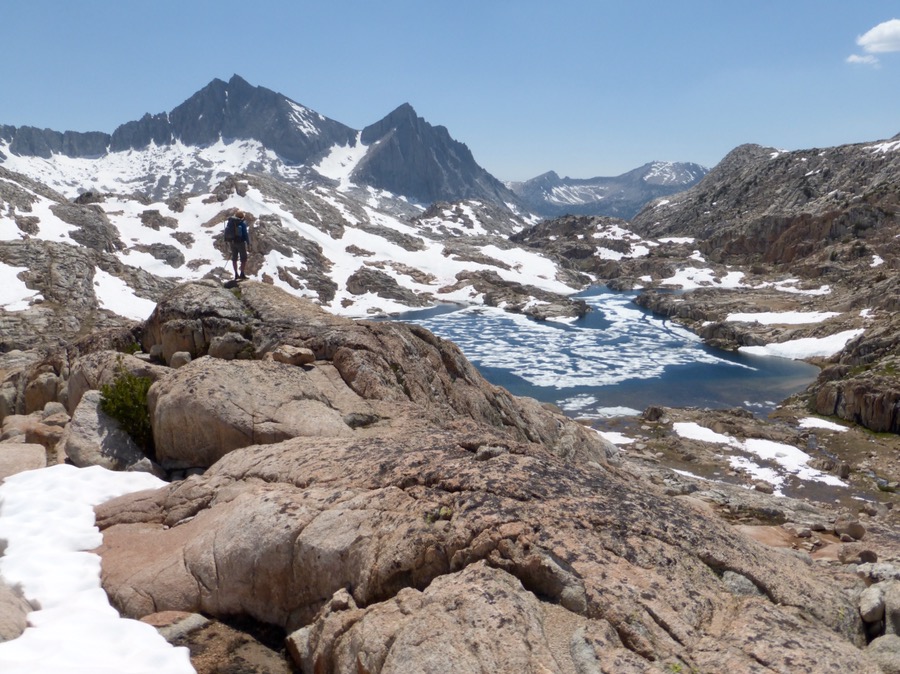 Black Bear Lake with Seven Gables Mtn in the distance.

From here, we headed up to White Bear Pass. There was snow leading up to the pass, but surprisingly, there wasn’t any on the north side. 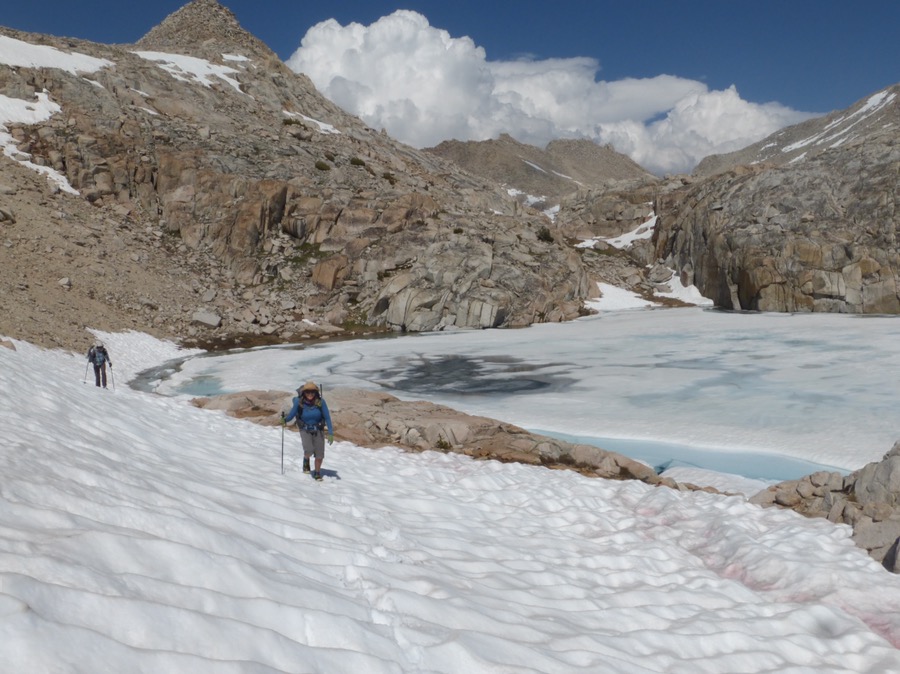 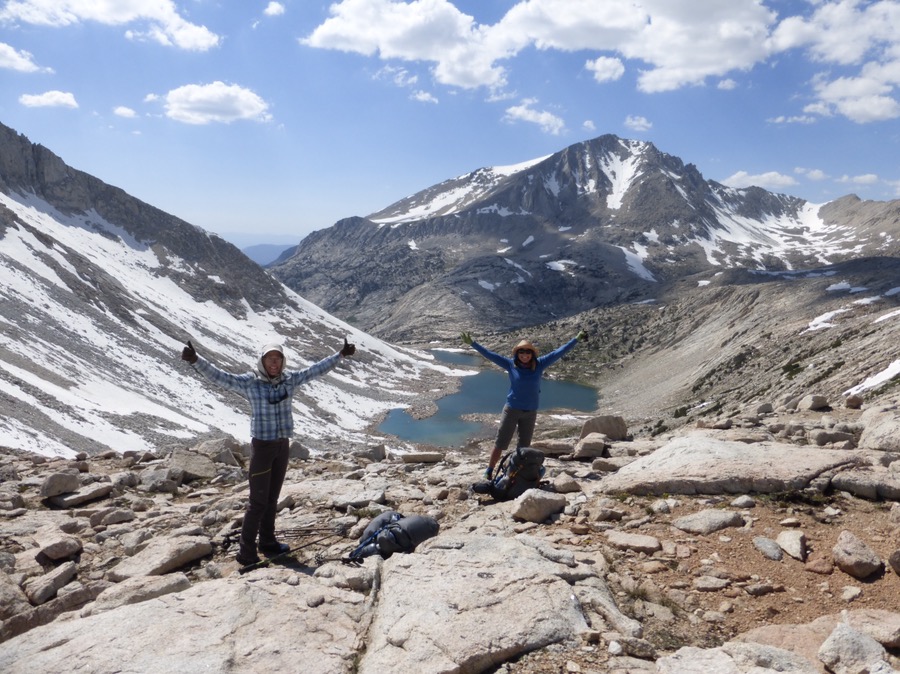 Top of White Bear Pass with Brown Bear Lake below.

We got to approach the north side of White Bear Pass as described in the guidebook! We had ledges and the longest stretch of talus yet. I must be getting use to it, because I was much more fluid and confident in my footing on the talus today. 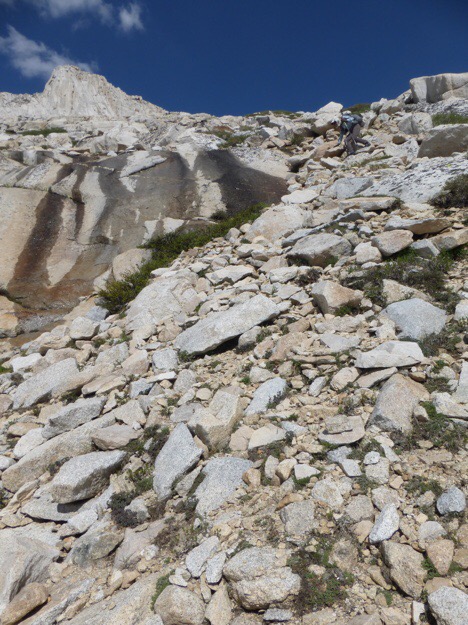 Why Not coming down steep talus. 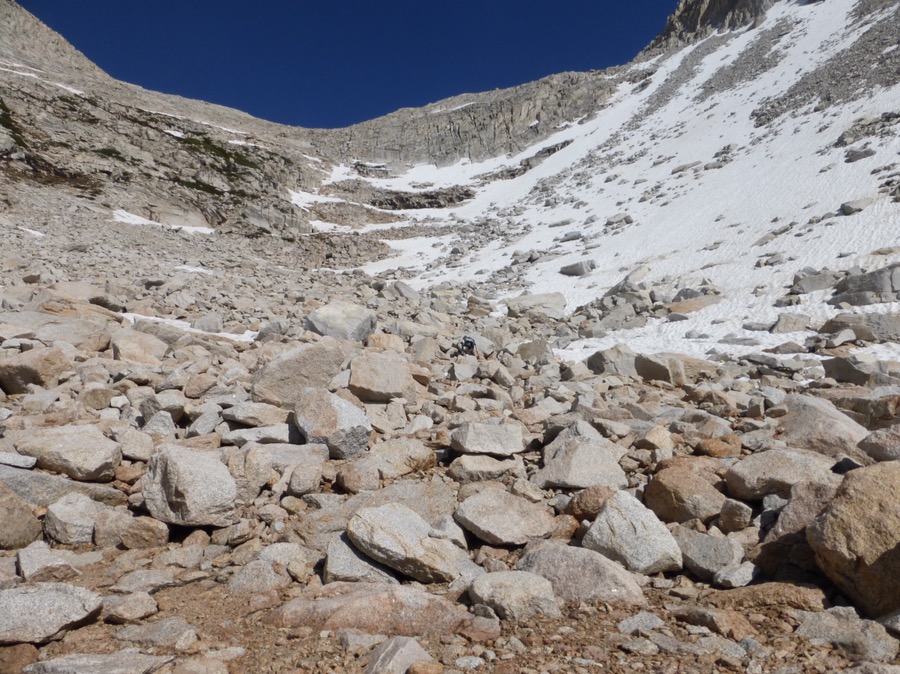 Looking back on White Bear Pass, which seems impossible from this vantage point.

Finally, once down from the pass, we had a short hike up to Lake Italy. It is huge! We walked halfway along the shore we need to follow before stopping to camp at 6:30pm. 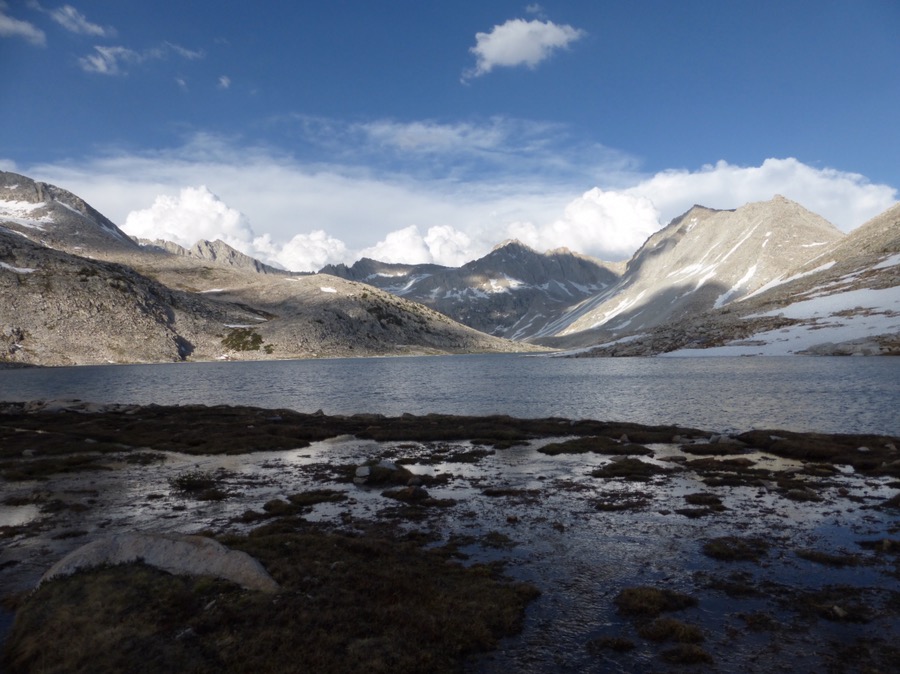 It’s a great spot to camp! We saw no one today, but late tonight, I noticed someone camped far in the distance on the other side of the lake. It was a pretty great day. Yes, there’s lots of snow, but overall, I think I like experiencing the Sierra with some snow in it. 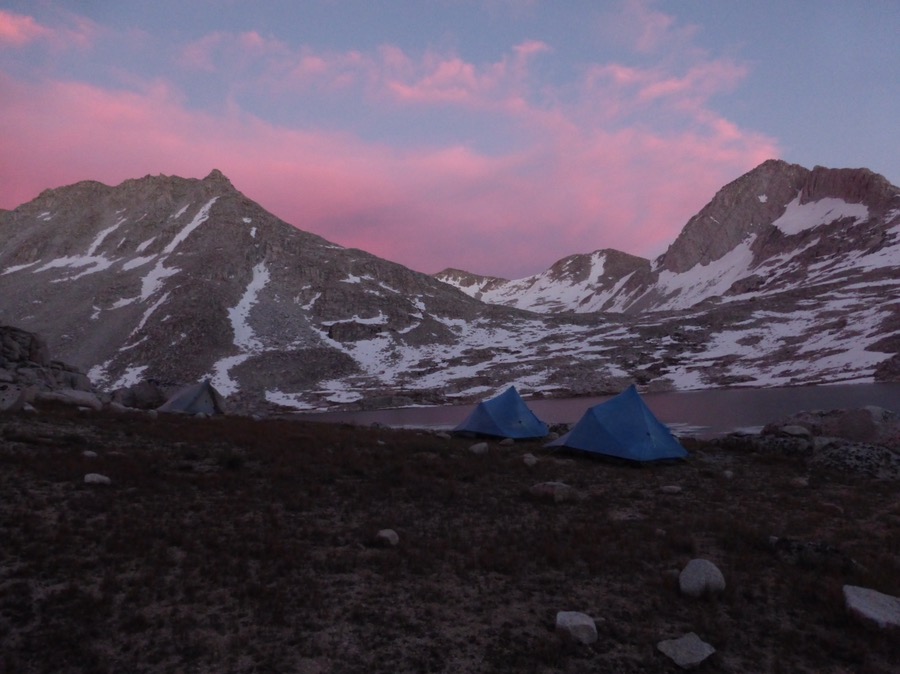