Again, I have a lot of photos today, but this journal is just as much for myself as it is for everyone else. I keep these journals and have them printed out personally through Blog2Print and love having all the details and photos to look back on the rest of my life. I realize these entries for the SHR have been lengthy, but I do these entries thinking of what I’ll want to read 30yrs from now when I want to virtually rehike the SHR.

Oh man, we woke up to the best sunrise colors over Blue Lake. Yep, great decision to stop early yesterday and camp at such a site. It may just be the best campsite I’ll ever have. 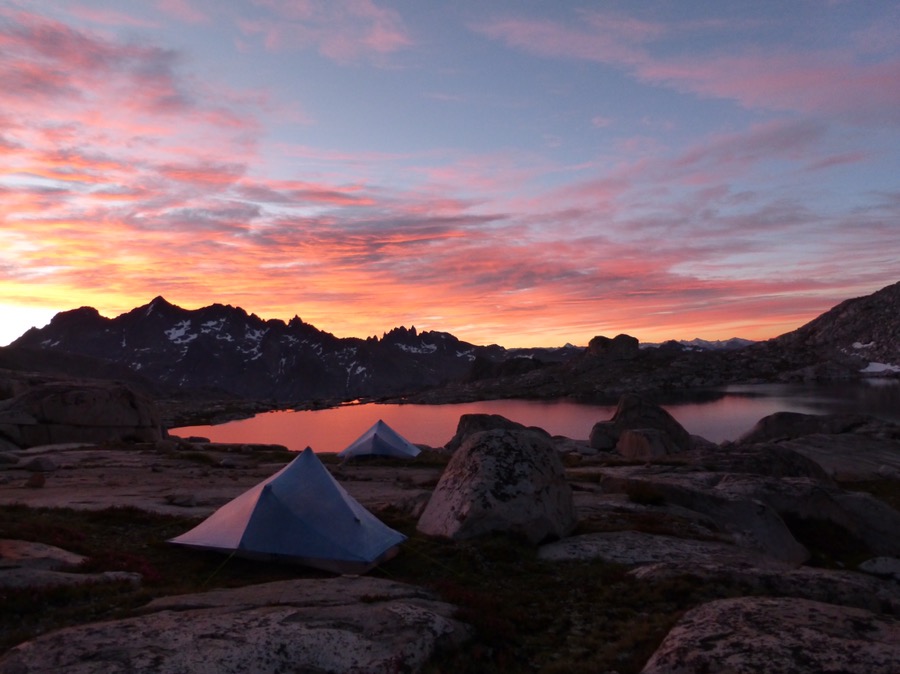 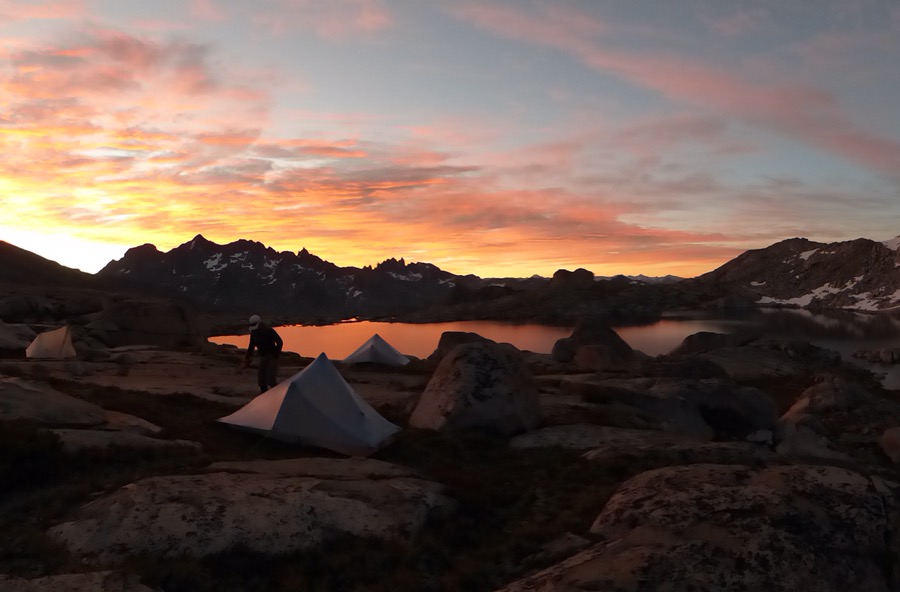 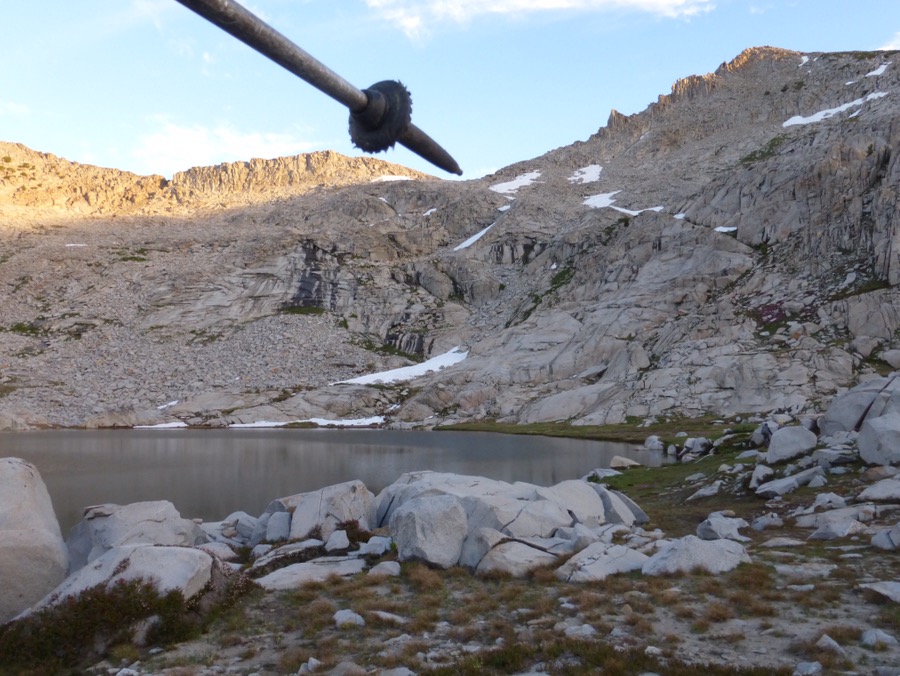 My body was in zombie mode due to my period. My arms and legs just didn’t want to move and everything felt like a weight with gravity double the force of what it usually is. Not a good condition to be in on the SHR, but the good news is that most of today was on trail. Once we finished Blue Lake Pass, I could at least hike on autopilot on a trail. Good timing on that one. 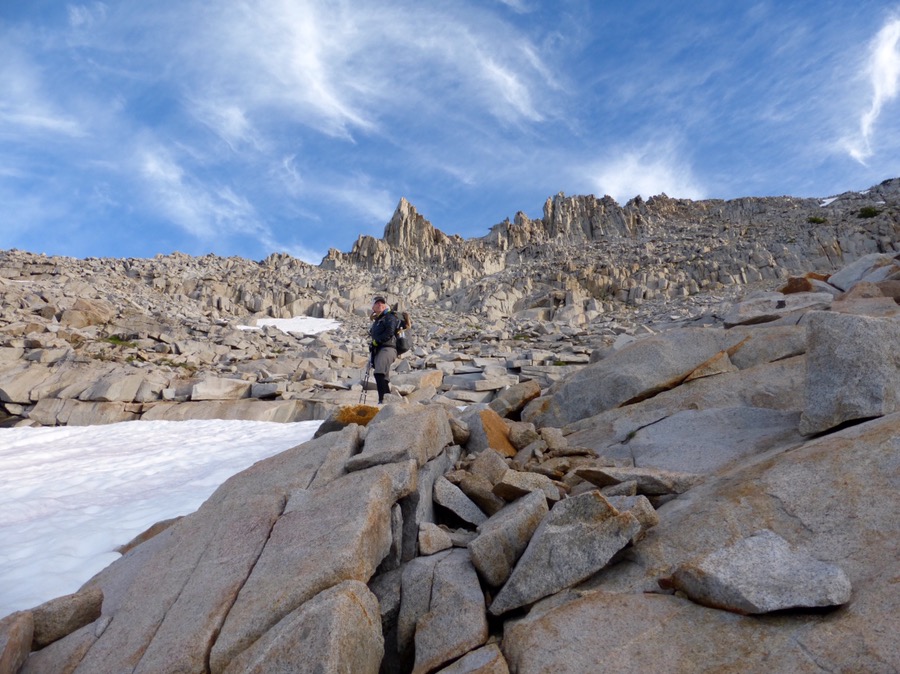 Rockin’ heading up the pass.

Why Not on the large talus.

Once we got to the other side of the pass, it was like entering a refrigerator. The sun didn’t hit that north side of the pass until well after we finished getting down and this was the latest morning that we’ve worn our down jackets. Because of steep snow chutes, we weren’t able to descend on the side that the guidebook recommends and we had to go down where it warned not to go because of cliffs. Yep, the story of our early season hike. 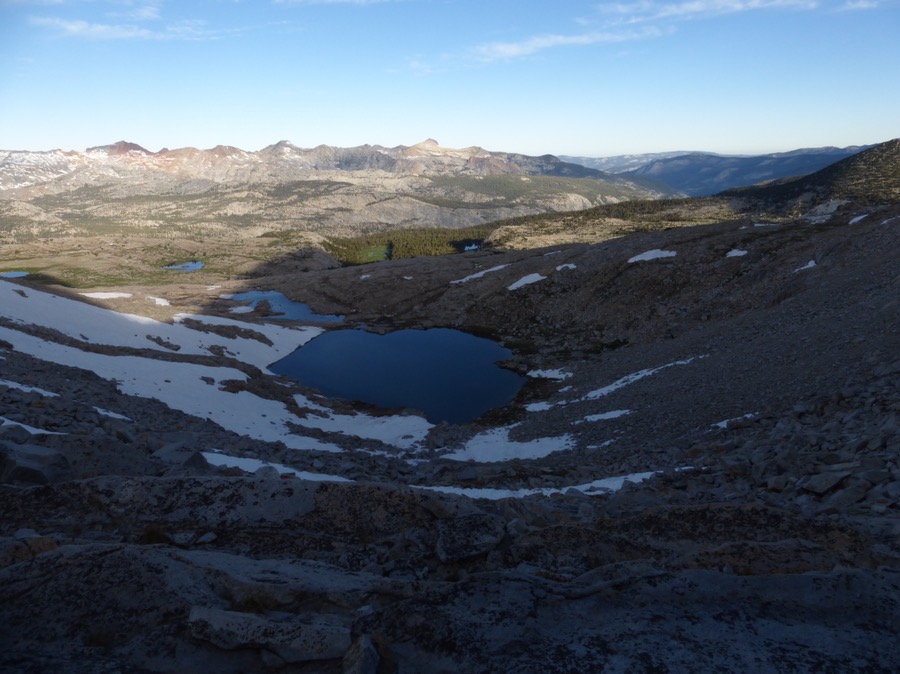 The north side of Blue Lake Pass.

I almost made a terrible mistake going over the cliff. With how weak I felt mentally and physically today, I took my pack off on a down climb and intended to drop it where I was going to climb down. It wasn’t a far drop, but I was careless and it bounced down a couple levels. In that moment I was sure it was a goner! Whew, close one and quite a stupid move to make. I just wasn’t thinking. I do have to say that Blue Lake Pass is my favorite pass though! 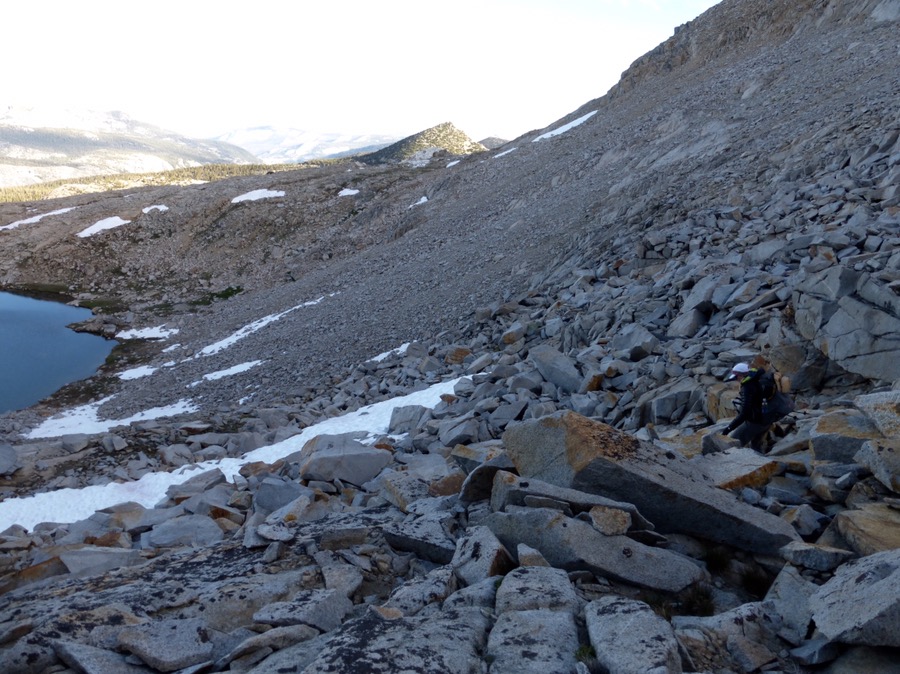 Why Not descending Blue Lake Pass. 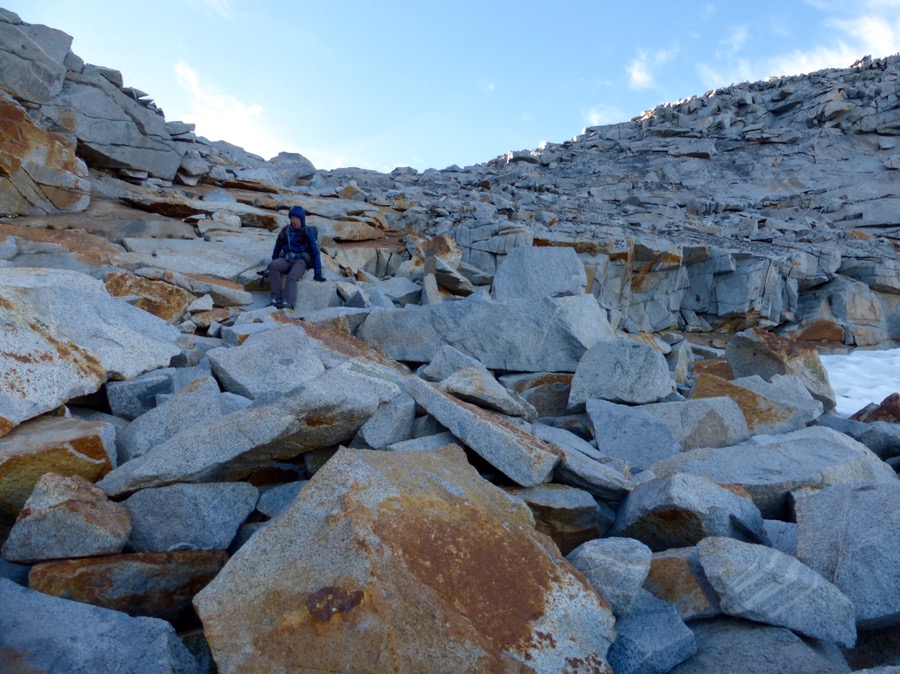 Inching down the large talus. 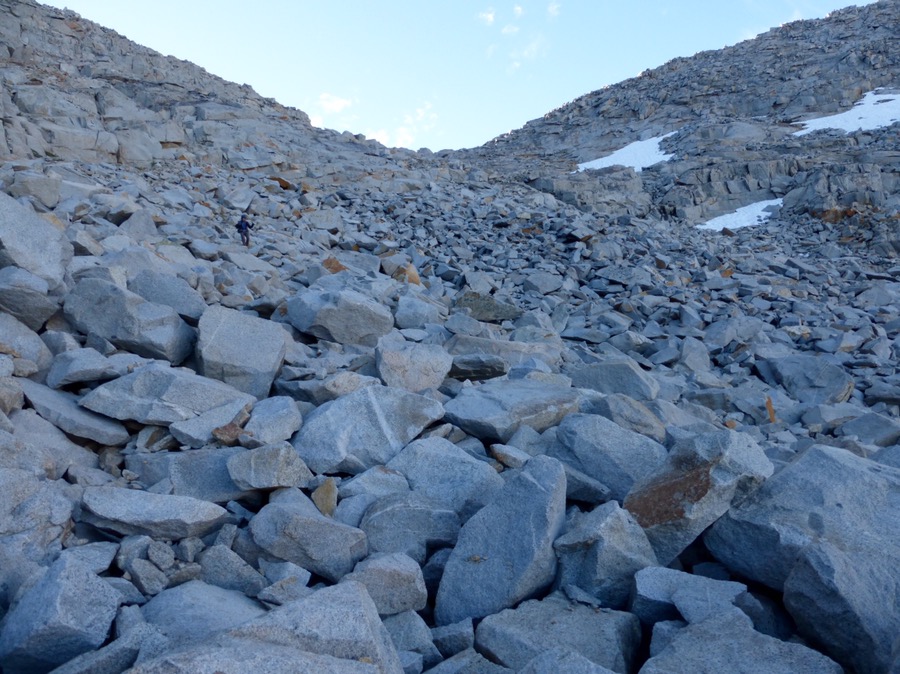 Looking back on what we came down.

After we got over the pass, we had some great cross country that dropped down to the Iceberg Pass Trail. 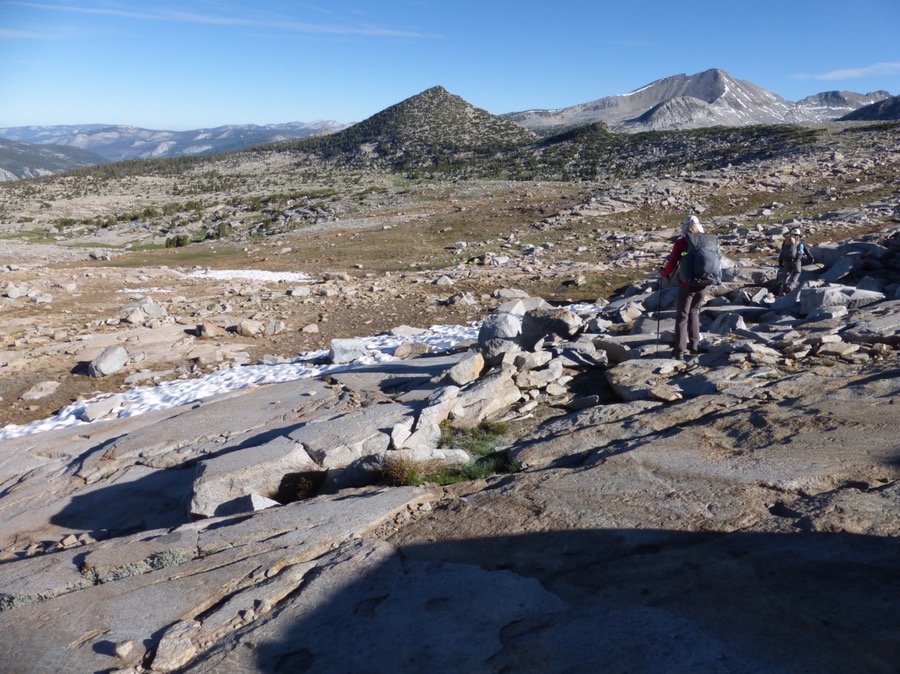 The Iceberg Pass Trail led steeply down the Lyell Fork Canyon all the way down to the Lyell River at 8720ft. Quite the drop from over 11,000ft on the pass. It was immediately quintessential Yosemite trail with stone steps, switchbacks bordered by granite stones, walking on granite slabs, and the distant views of that Yosemite smooth stone domes and waterfalls. I really enjoyed the change of pace, being able to take in the scenery, and being in the trees. I also have a newfound respect for the work that went into creating such a crazy trail down that canyon. 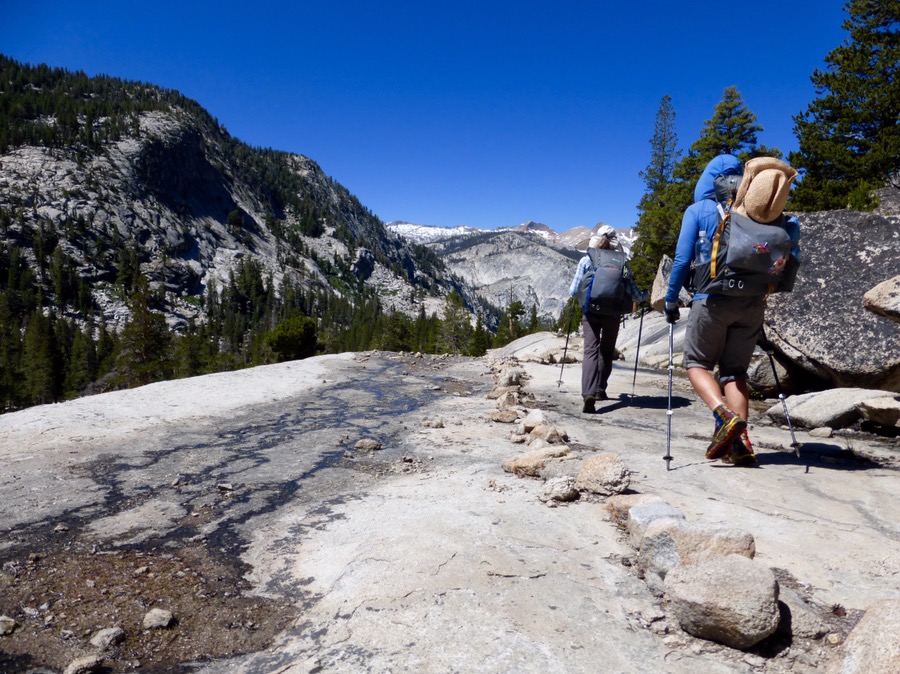 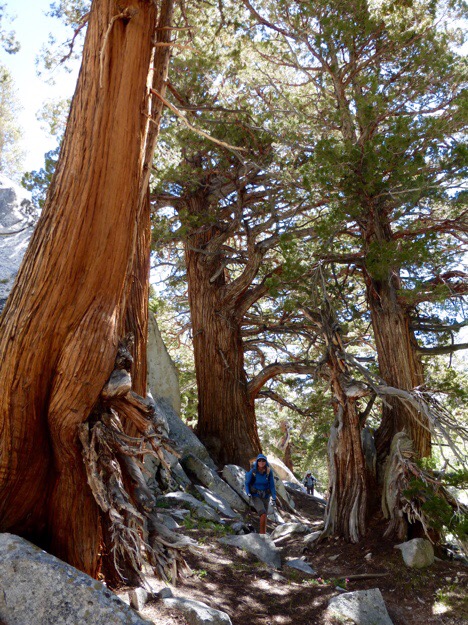 I heart the trees!

What is this? It shined like a fossil watch. 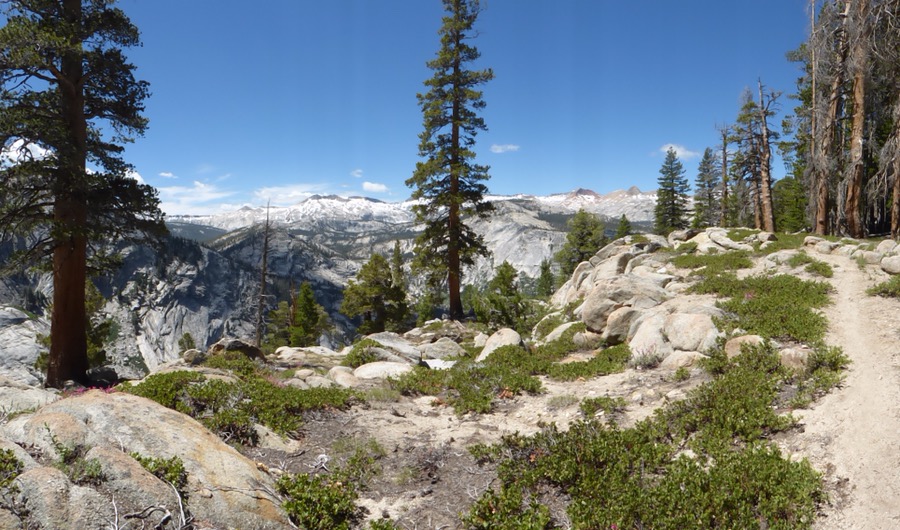 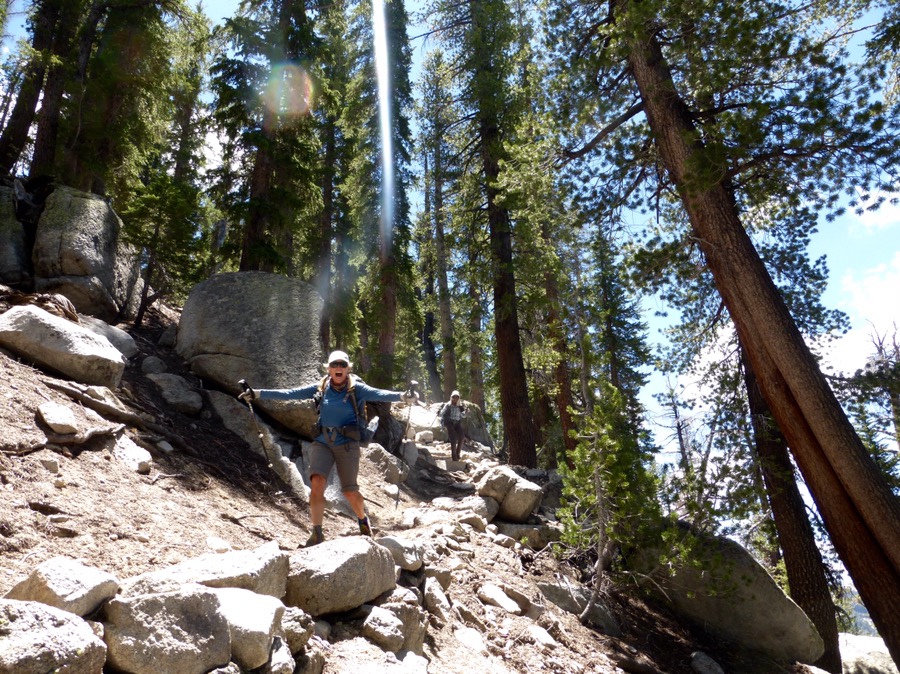 All three of us managed to fall while on trail today. Pretty ridiculous, but it has to be due to the fact that we just got more lax being on a trail. For me, the fall was almost immediately after getting on trail. I’m pretty weak today and my ankles are always something I need to consciously be aware to step so they don’t roll. I have a bad ankle that had surgery on a severed tendon about 10yrs ago that I’m super paranoid about, but my other ankle (aka “fat ankle” from the CDT) is also weak and catches me off guard from time to time. Well, it did today as it totally went out when I was moseying on trail and my momentum had me down pretty quick. Fortunately, I was on soft pine needles, there were no scrapes, and the ankle didn’t swell. It was a good wake up call for sure!

Once all the way down to the Lyell River, we had a long hike up and over Vogelsang Pass (10,680ft) on the Lewis Creek Trail. It was a picturesque day with temps feeling more fall-like in the upper 60s and some wind. Just perfect. I listened to my music as we cruised up. 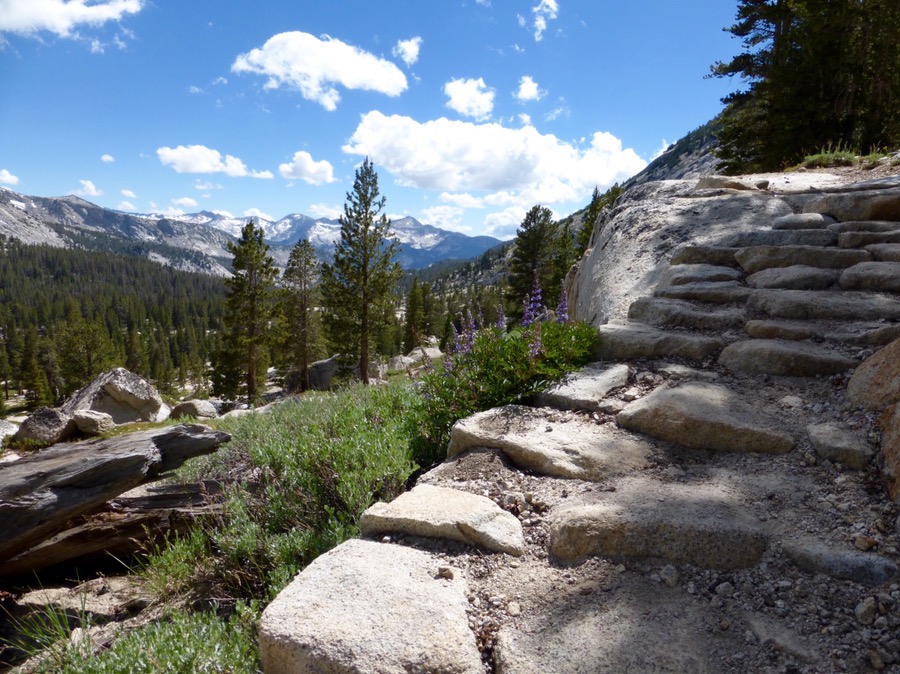 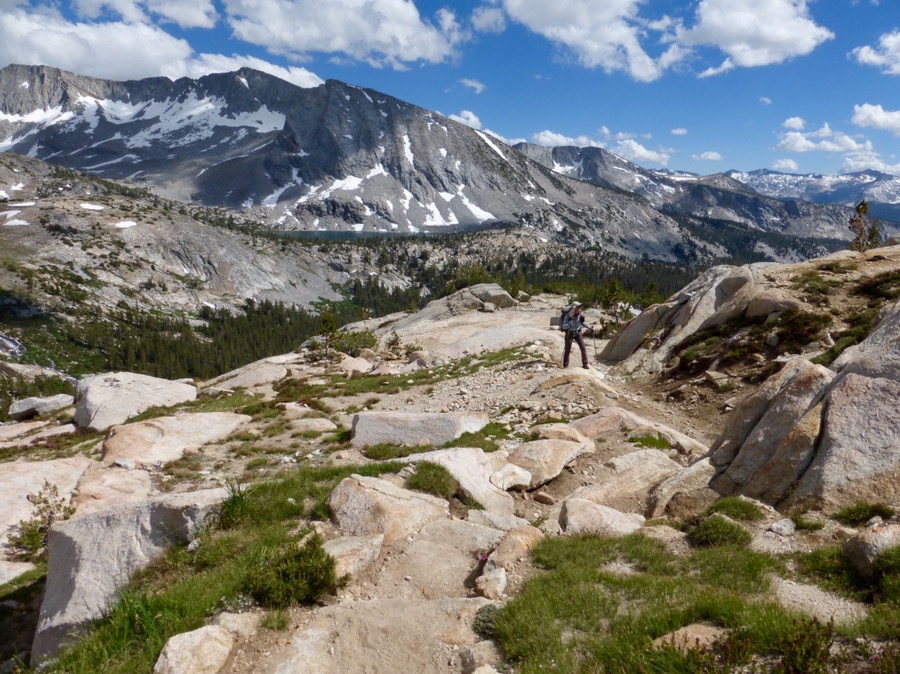 Why Not hiking up Vogelsang Pass. 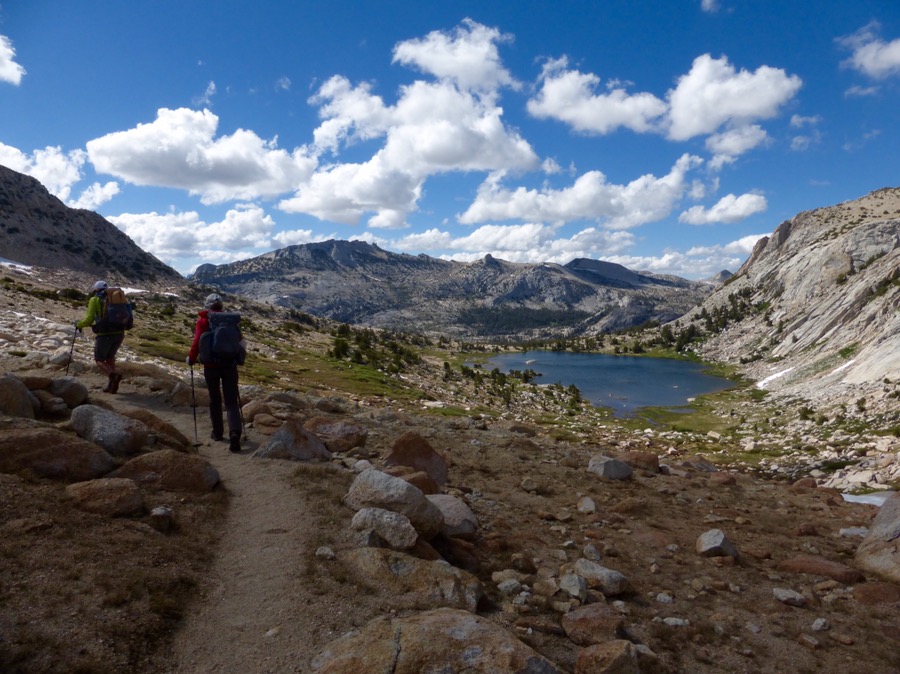 The north side of Vogelsang. 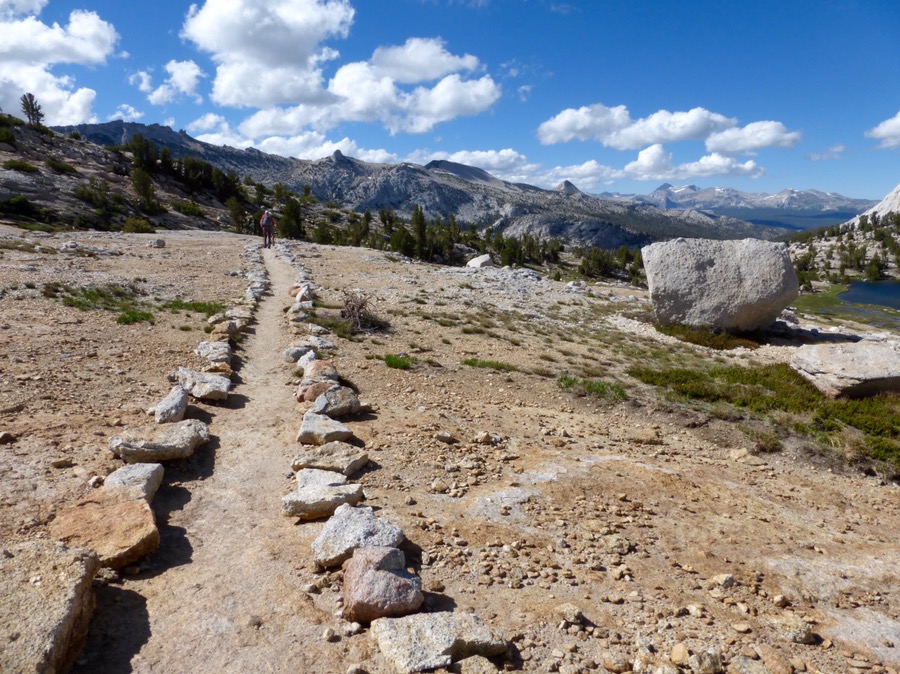 No talus on this north side descent.

After Vogelsang, we had another hour or so to our planned camping. Tomorrow we will go into Tuolumne Meadows, an area of Yosemite, to get our resupply boxes for the last three days. Camping is not allowed within 4mi of Tuolumne, so we got to that point and found an area to camp. 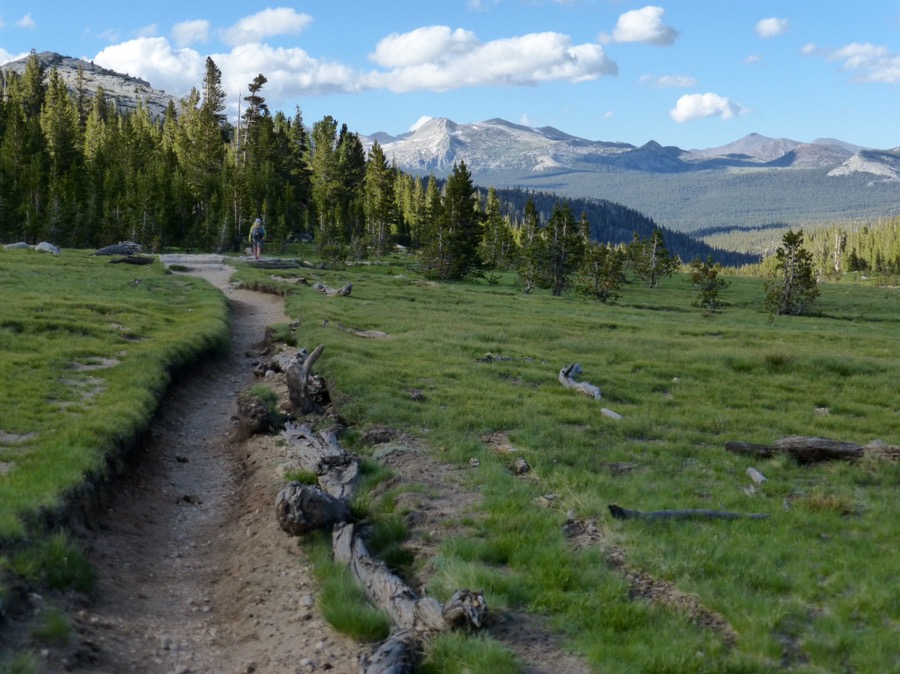 Hiking down toward Tuolumne along Rafferty Creek. 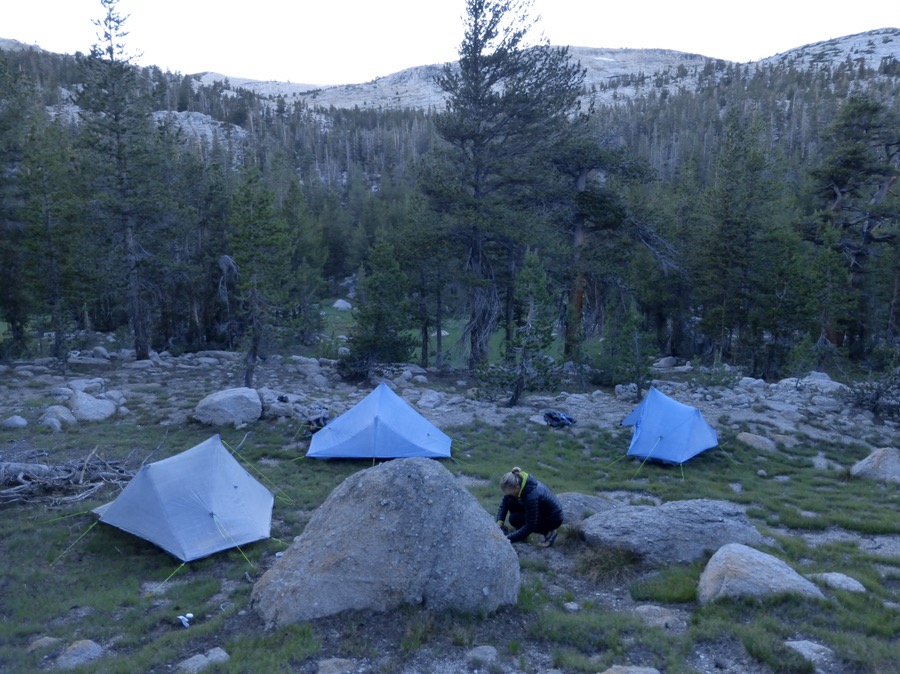 So our itinerary for tomorrow was to stop in Tuolomne, grab our resupply boxes, and continue hiking. There is a store, a backpackers campground, and a high Sierra camp that does formal meals. I lost the vote, and we are going to hike the 4mi to Tuoloume tomorrow and stay the night to relax and rest up. Those of you that know me from past years know this isn’t quite my style to stop so much, but I know I’m the outlier in that regard and most people enjoy these stops as part of the experience. I had my freak out moment tonight when I realized we were staying tomorrow and I am adjusting. Hey, I get a day to watch some shows! Who can complain about that!?