Day 2: Cruisin’ In The Canyon

Today had two parts to the day, the down, and the up. We were camped at 10,366ft and had a looong gradual downhill for over half the day. First, we followed a trail that followed the Wallace Creek all the way down to Kern Canyon and the Kern River. 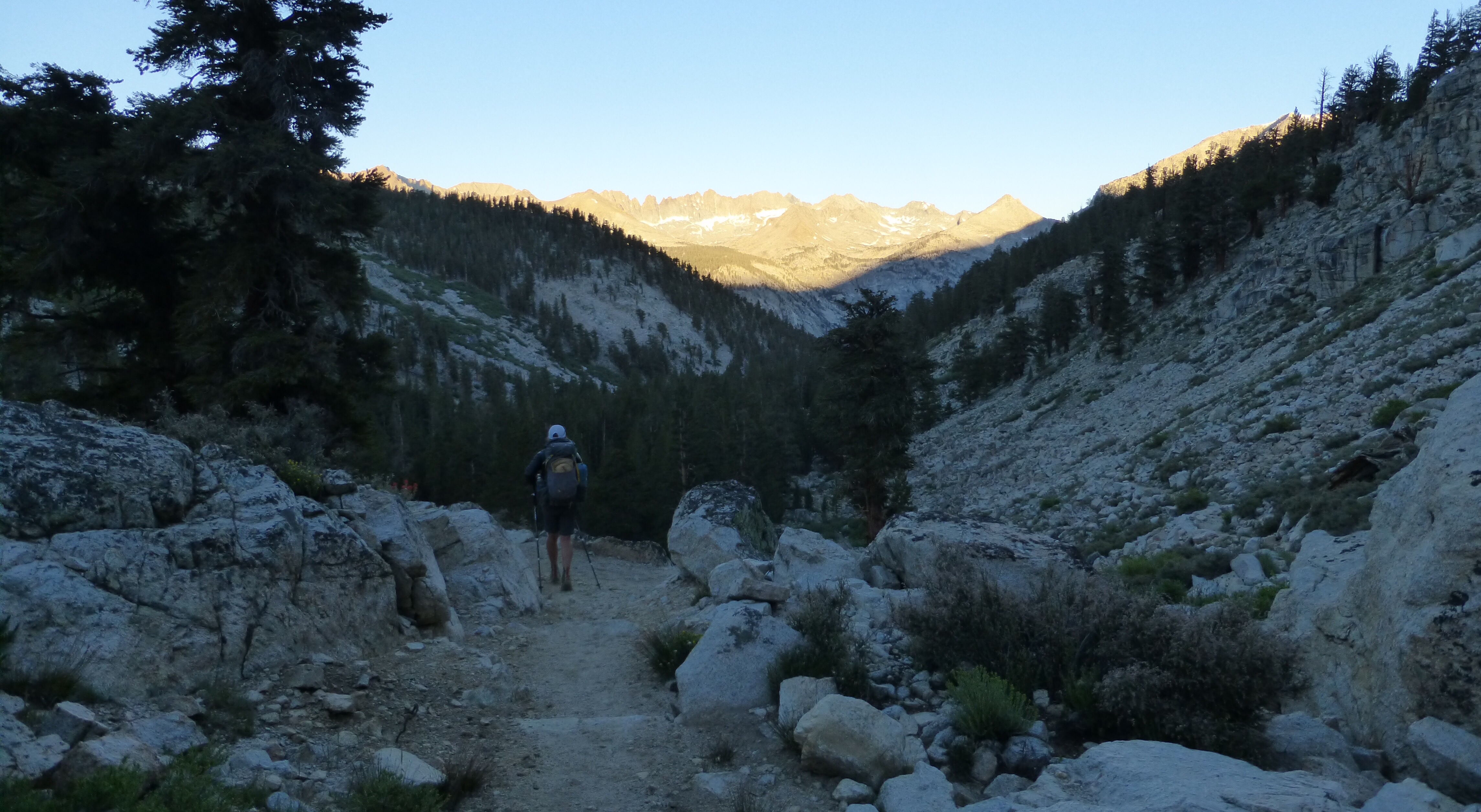 Morning light on the mountains as we headed down to the Kern River and Canyon. 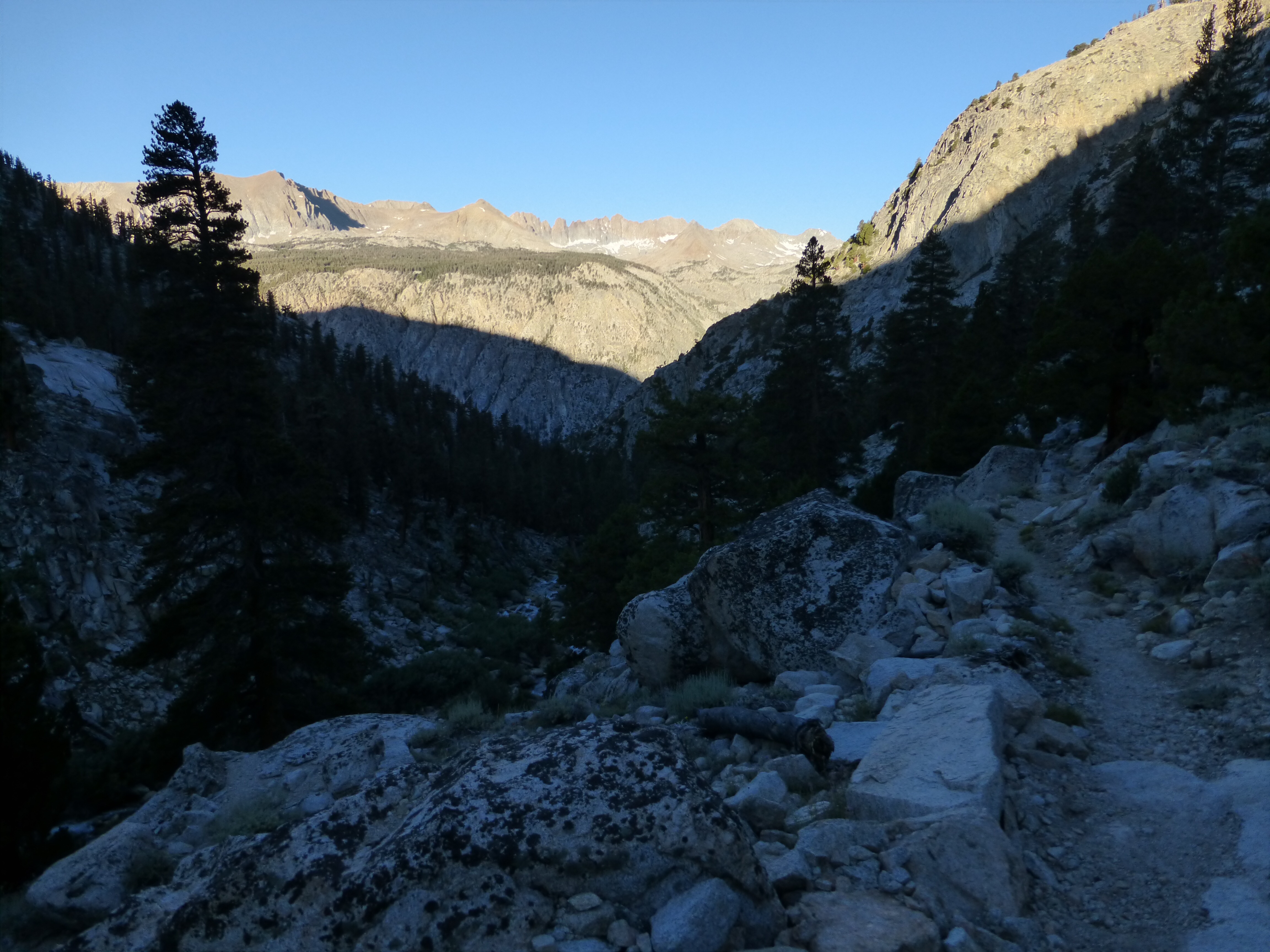 If you look at the map of our route, you’ll see a 90 degree turn that heads south down a canyon. That’s the Kern River. It was almost 10mi of walking down the Kern Canyon today. This canyon is unique because it runs very straight for 25mi. That is because it is on the Kern Canyon fault. What is left are 2,000-5,000ft walls on either side of the canyon. 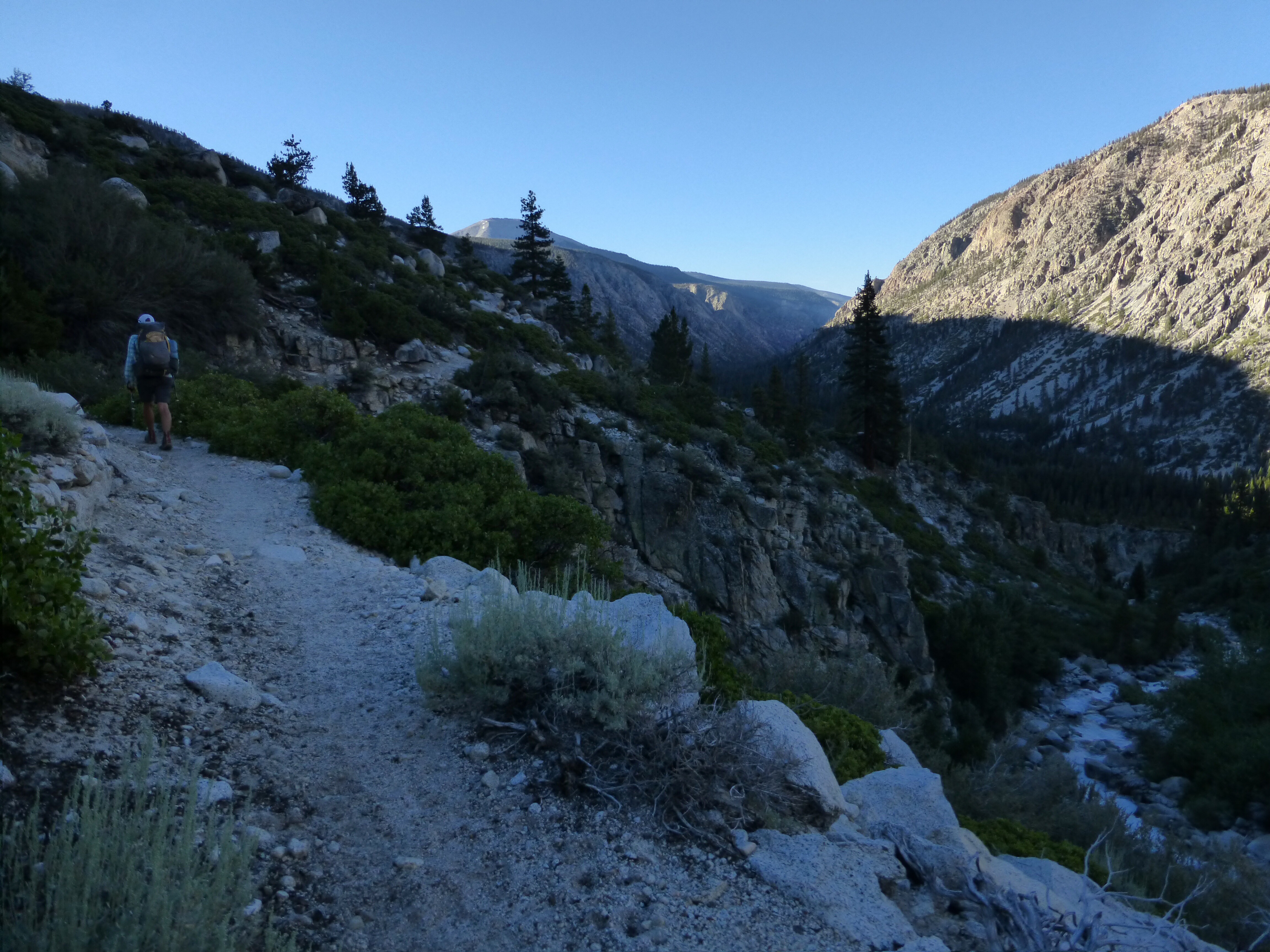 Making the turn into Kern Canyon before dropping all the way to the river. 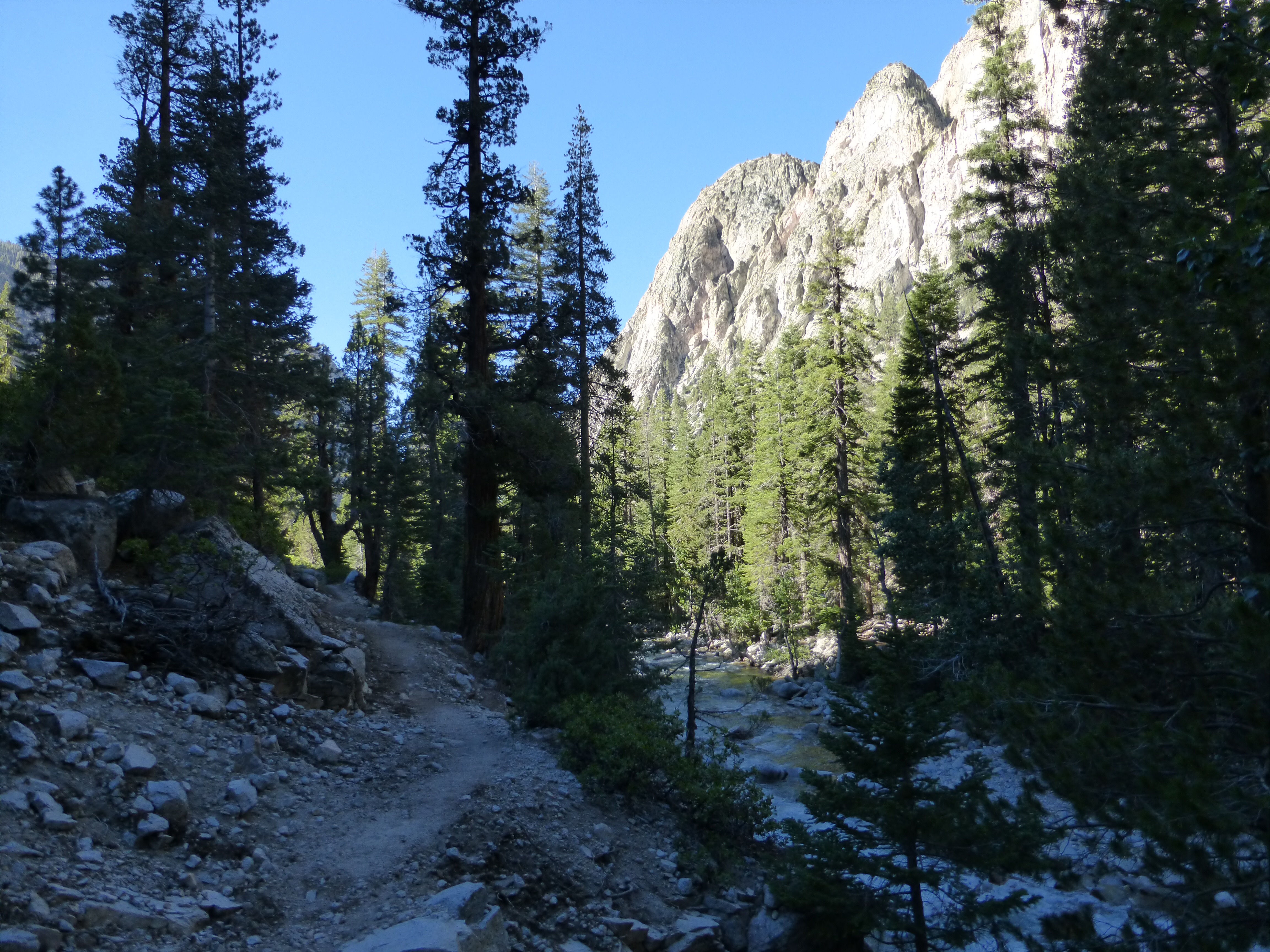 Hiking along the Kern River. 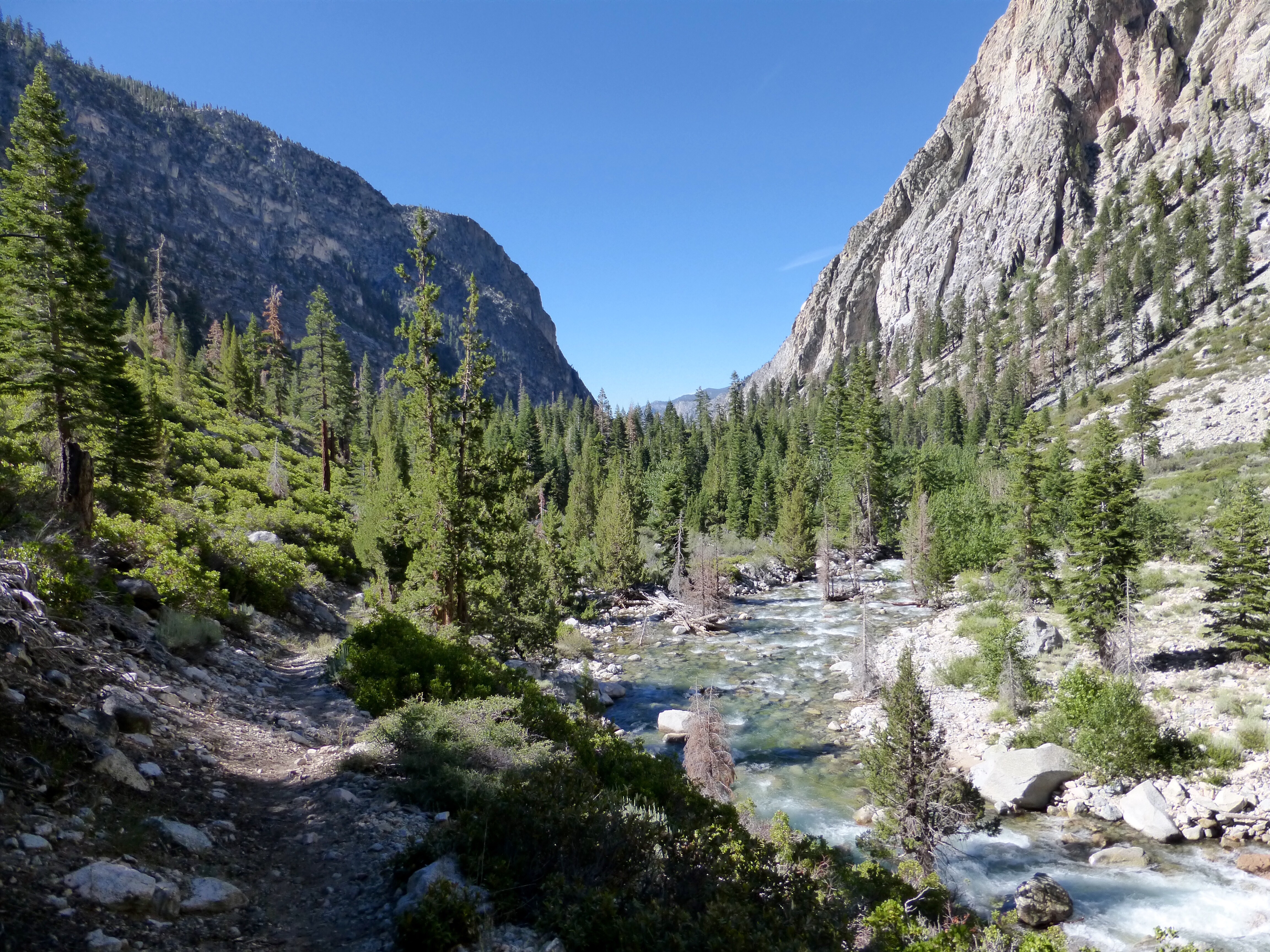 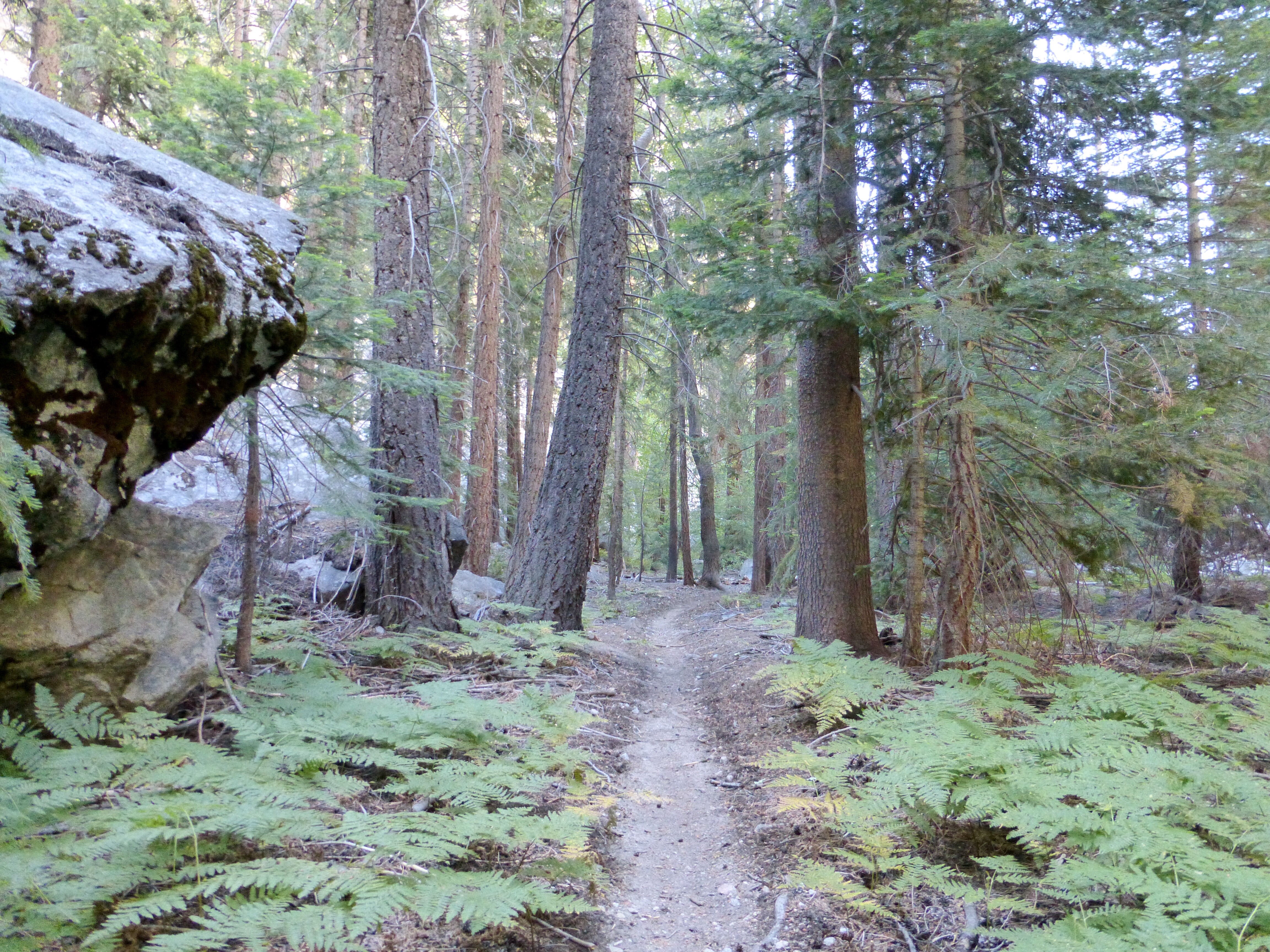 We had a lot of wooded hiking today, which I have missed.

We are pretty happy with our westbound route as we’ve met a lot of HST hikers going the eastbound route, and not enjoying something like 14mi of uphill. Yes, our direction has the haul up through Whitney Portal to start out, but overall it has 2,000ft less in elevation gain overall. The midday event of the day was the Kern River Hot Springs. I’m not a big fan of hot springs and communal bathing, but got my feet in. 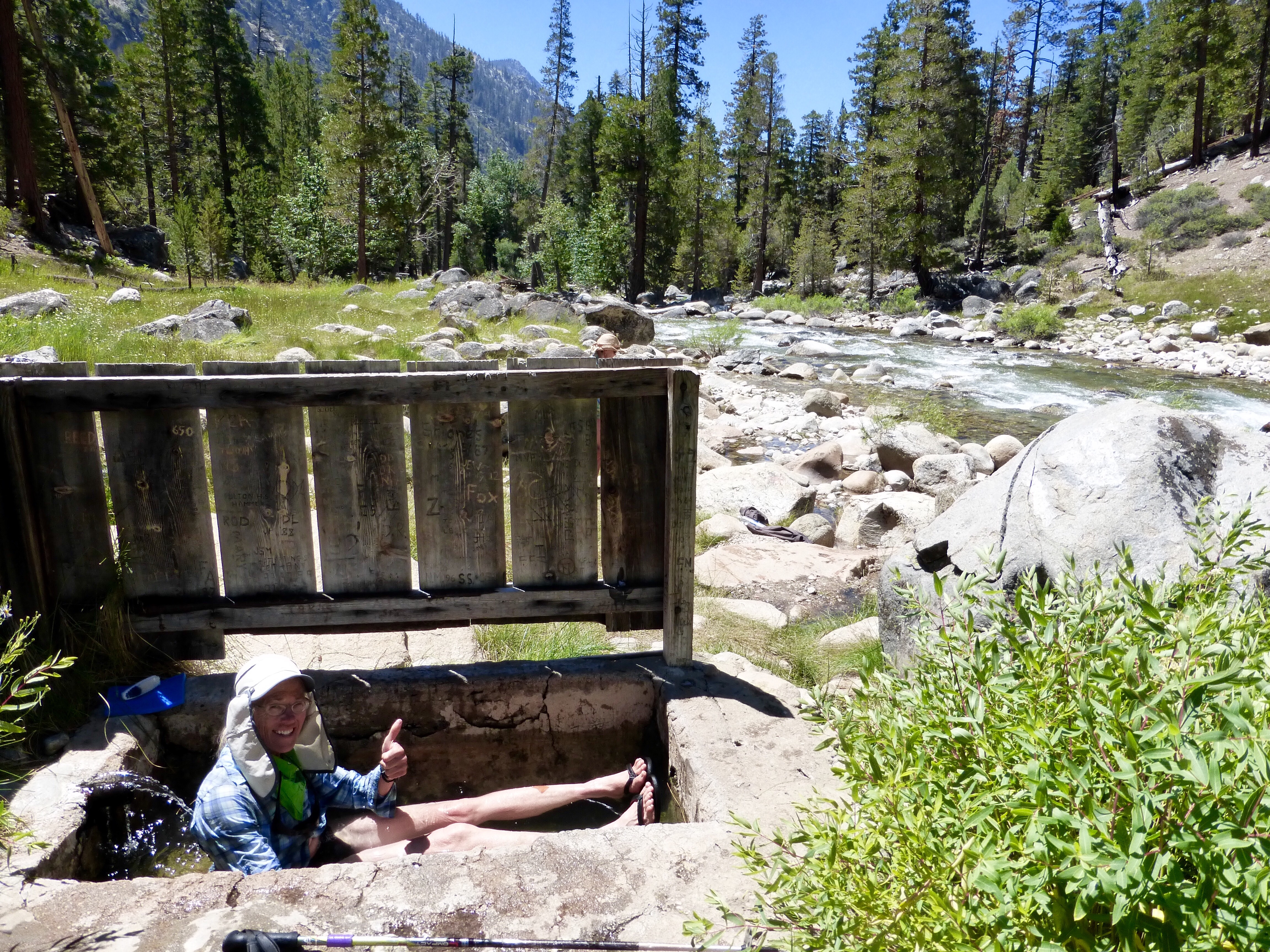 Why Not soaking her legs at the hot spring.

It’s a small concrete tub that you plug and it fills so it’s new water for each person. Next to it is a lounging area in the Kern River, so people tend to go back and forth from hot to cold. I know I’m the anomaly here, but when it’s 90 degrees, standing in hot water isn’t at the top of my favorite things to do. Why Not and Rockin’ partook in a more complete soak and enjoyed it. I’m just glad we had it to ourselves!

We had a couple more miles of downhill after the extended lunch at the hot spring. Then the trail turned sharply back north and uphill for about 2,500ft over 5mi. 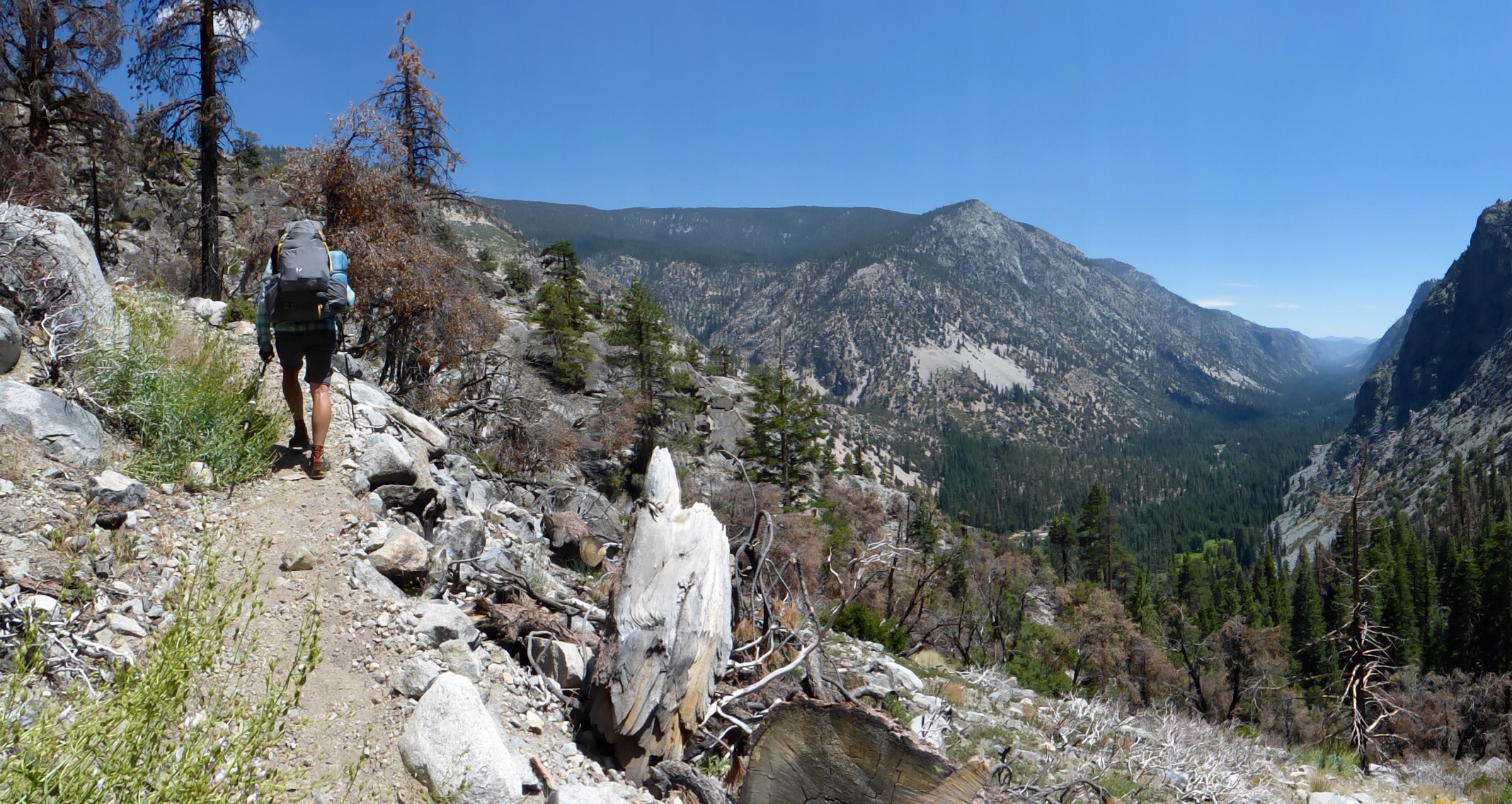 Hot and exposed uphill switchbacks out of Kern Canyon.

It was HOT! 93 degrees was what my thermometer read as we did the mostly exposed switchbacks up. It did get cooler once we got higher up and there was a nice breeze and more shade. We walked past Sky Parlor Meadow, and we could see the Kaweah Mtns across the meadow. Tomorrow, we hike over something called Kaweah Gap. 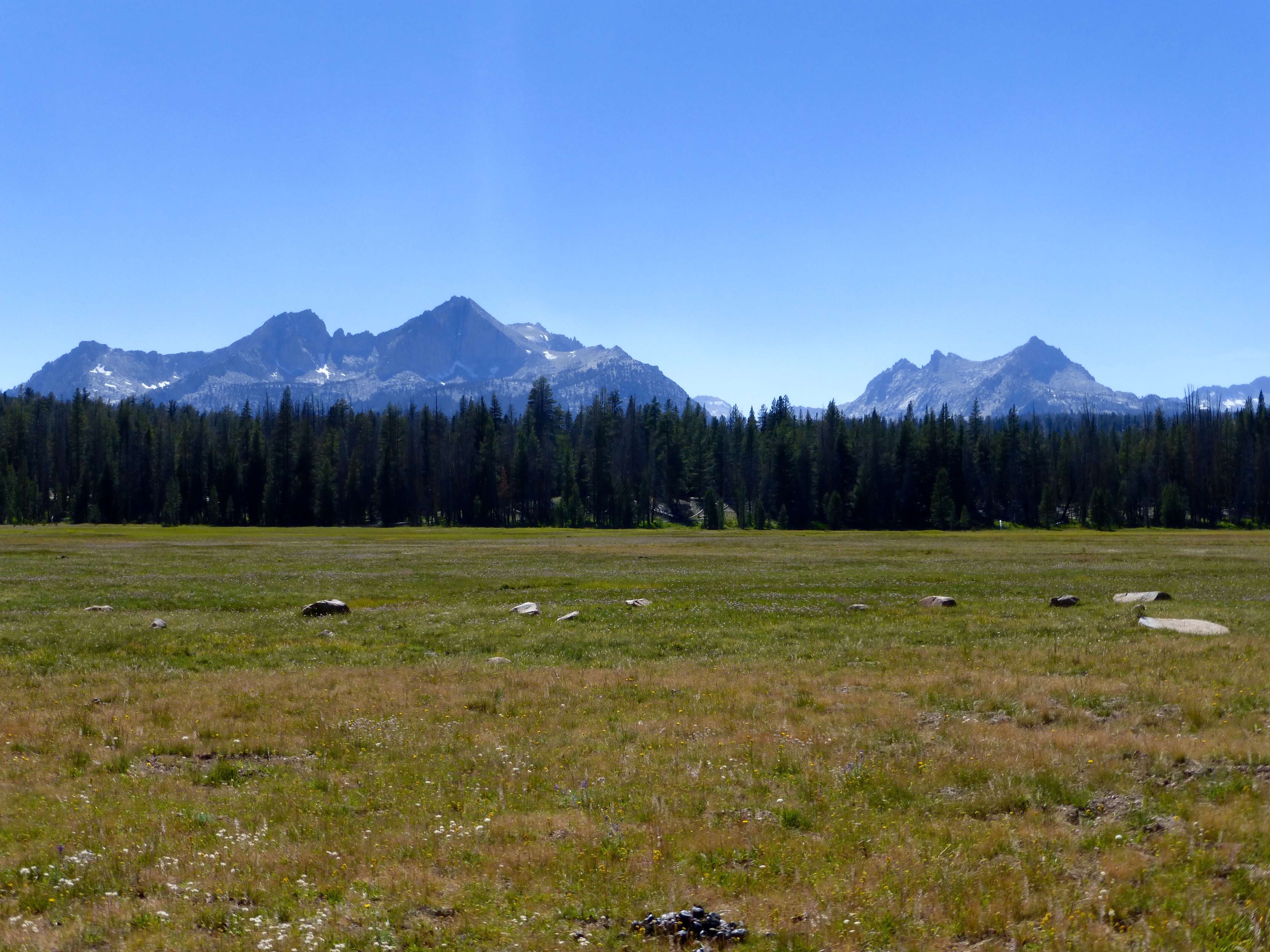 Soon after the meadow, we reached our predetermined destination of Moraine Lake. There is a trail that parallels the High Sierra Trail for a few miles to take hikers to Moraine Lake and we heard it was a must do, so we planned to camp there. When we got there at 5pm, we hiked to the far end to have space from a lot of other campers that had already arrived. Then the most terrifying thing happened! I was hiking in front and before I even saw anything, I heard the very loud, close, and distinct sound of a rattlesnake! 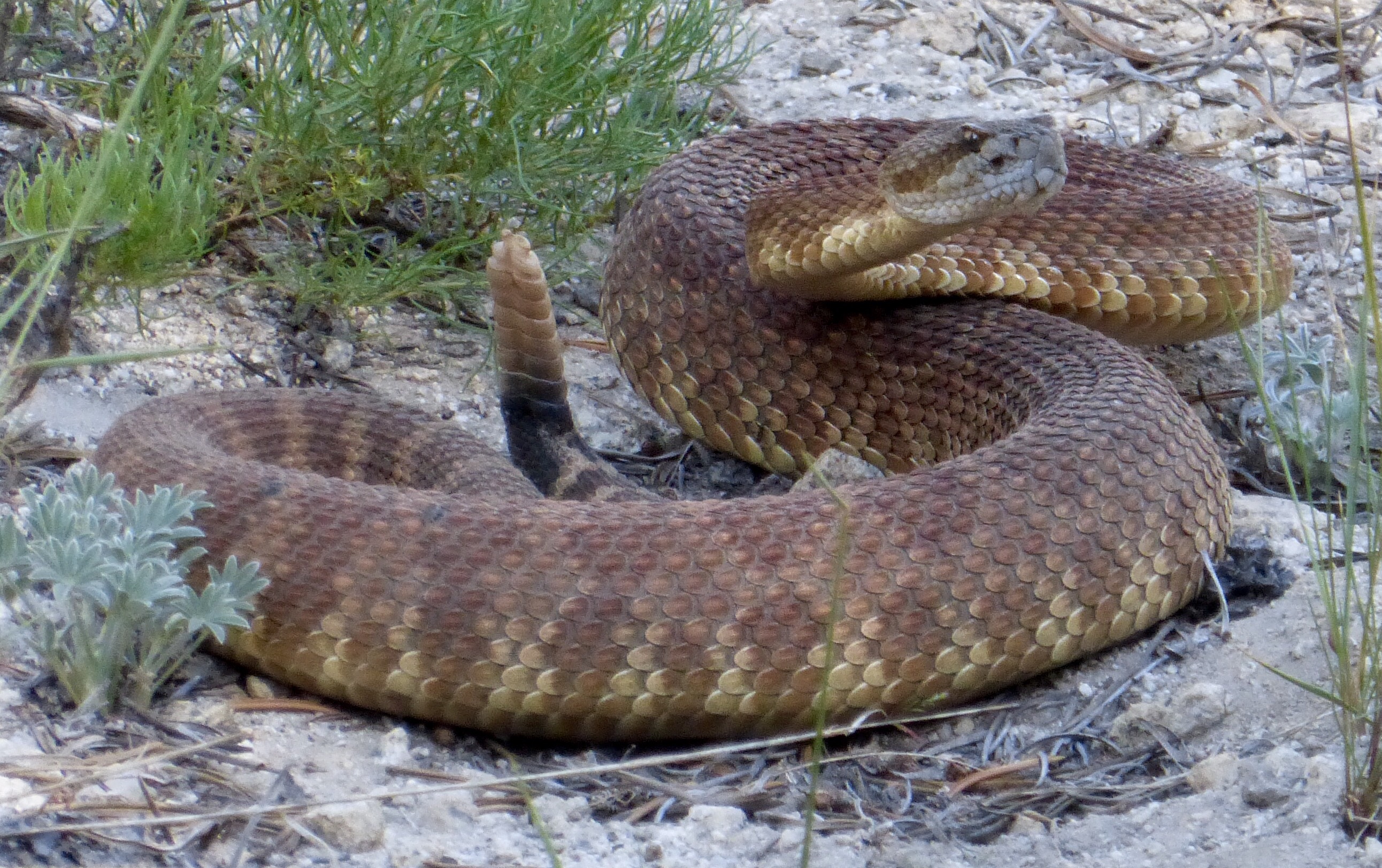 Angry rattlesnake that scared the crap out of me!

A half second later, I saw it by the trail and it scared me so much that yelled “shit” and leapt off the trail in an attempt to run backwards. Why Not and Rockin’ were right behind me as I unintentionally did a spot on impersonation of a person in a horror movie falling backwards in the woods as someone is chasing them. Not my coolest moment at all. I’ve seen my share of rattlers and this one was angry and big…and since when are there rattlesnakes in the Sierra!? What kind is this thing!? Now I’m super paranoid that they could be anywhere!

After that entertainment to end the day, we found a more remote camping area to ourselves at the end of the lake. 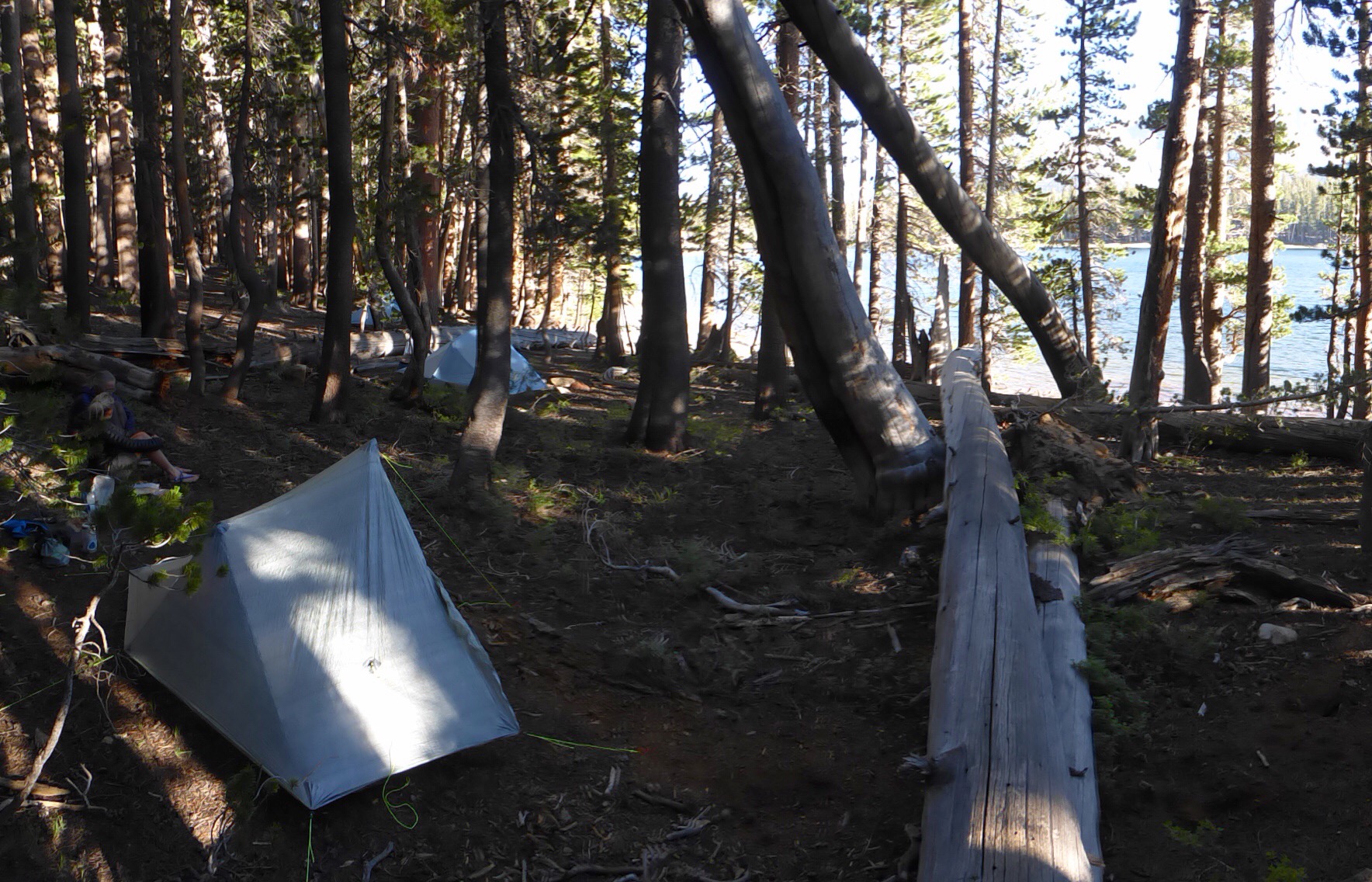 We all agreed that today was pretty uneventful as far as scenery and what we expected from this trail. We saw a handful of other HST hikers going the opposite direction today, and there’s another handful camped here at the lake, but we’ve yet to meet any going our direction. The diversity in all aspects of hikers we’ve met has been great to see. All the hikers are really enjoying it and I’m appreciating some time on a trail, but today was a bit of a letdown. With the name, High Sierra Trail, I expected something higher rather than being in a canyon all day. Don’t get me wrong, I am a fan of the trees and walking by the river, but to be doing that all day on a High Sierra Trail isn’t what I imagined. Tomorrow, we will be in a canyon that we heard is cool and will hike up to a pass, so it may be more eventful.

Some of the people out here are on their first trip and I do see how this could be a cool introduction to the Sierra. This is a very nice lake with a sandy beach around it and sparse trees to camp around it. There’s even been a loon making sounds from time to time. I can imagine how cool it would be to hike up from where we came from yesterday (most do this hike in about 6-8 days and we are doing it in 3.5) and to overlap with the JMT for the first time, and go up Mt Whitney for the grand finale. It is a pretty good trip for those wanting to cut their teeth on the Sierra. 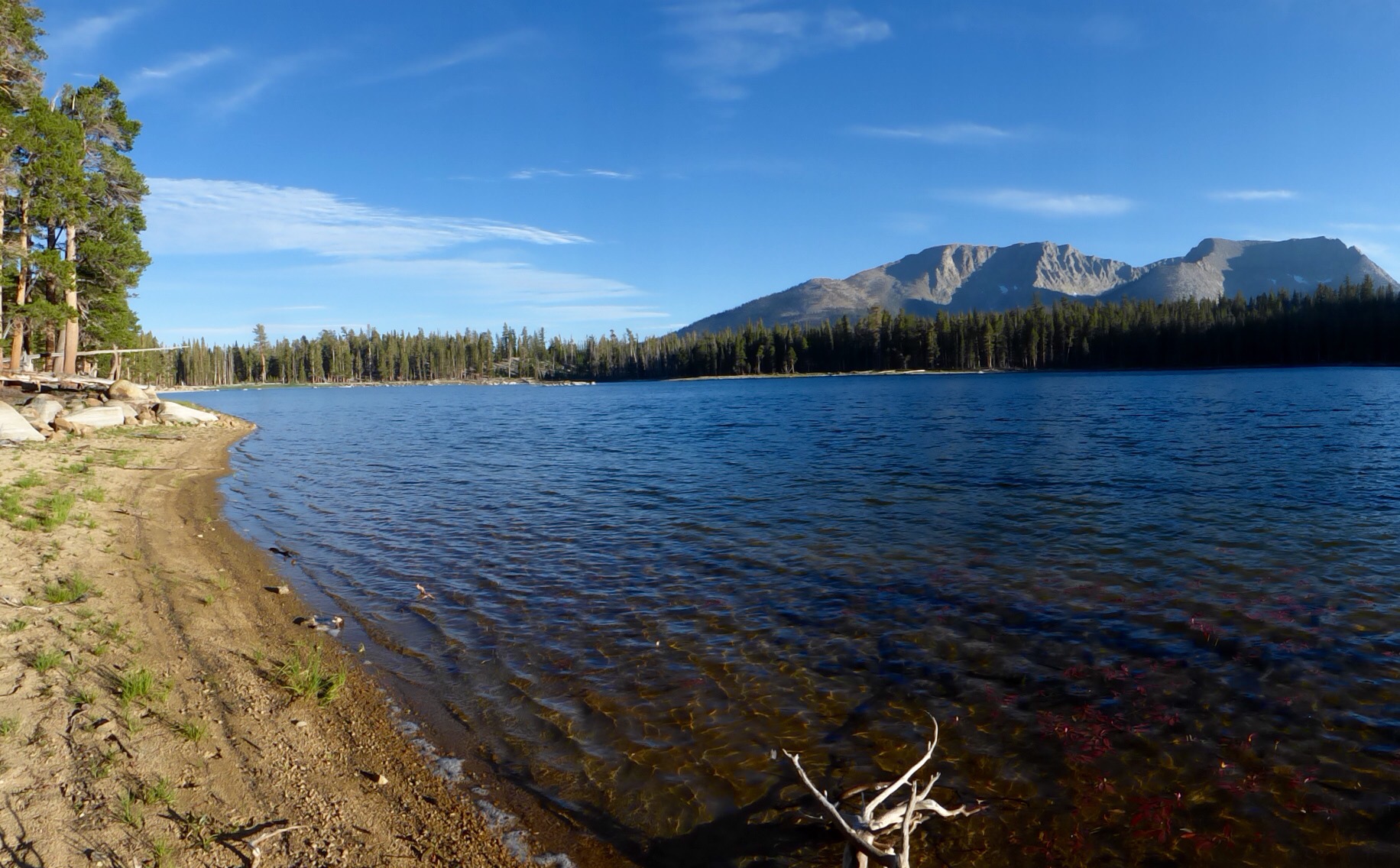 I can say I could get use to this whole camping well before 6pm thing, and I am getting quite spoiled. Tonight, I think I have time to watch two episodes of UnReal, score! I have realized that with the SHR and all the photos of the action and terrain, I’ve posted very few photos of myself. Here’s one from the tent tonight. Again, I’m a darn happy camper:) 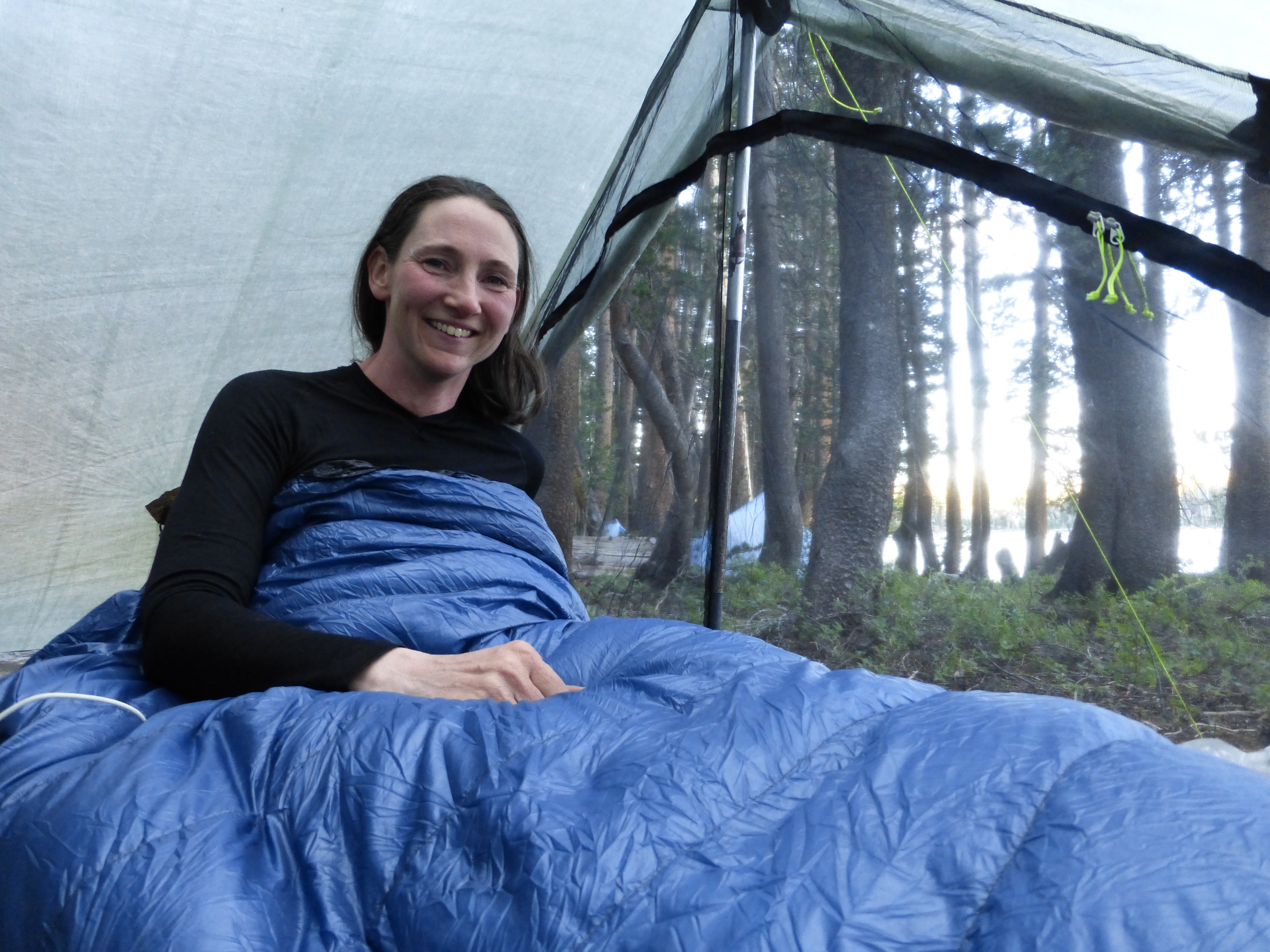