Today was our last full day on trail since we will finish the SHR tomorrow! It packed in plenty of ups and downs. We jumped right into the 1,300ft ascent of Sky Pilot Col this morning. Just around the corner from us, we came upon a couple doing an overnight that came in from a side trail. It’s just really odd to see other people out here and we all found it funny that we were camped so close to one another yet thought we had it all to ourselves. Sky Pilot Col is known as one of the most formidable passed on the SHR, but it ended up not being too bad.

It came in stages. First, a light use trail led up to a small tarn. We thought about heading up here to camp yesterday, but we weren’t sure if there would be camping. There was quite a bit of snow, but there were camp spots up there for anyone wondering. 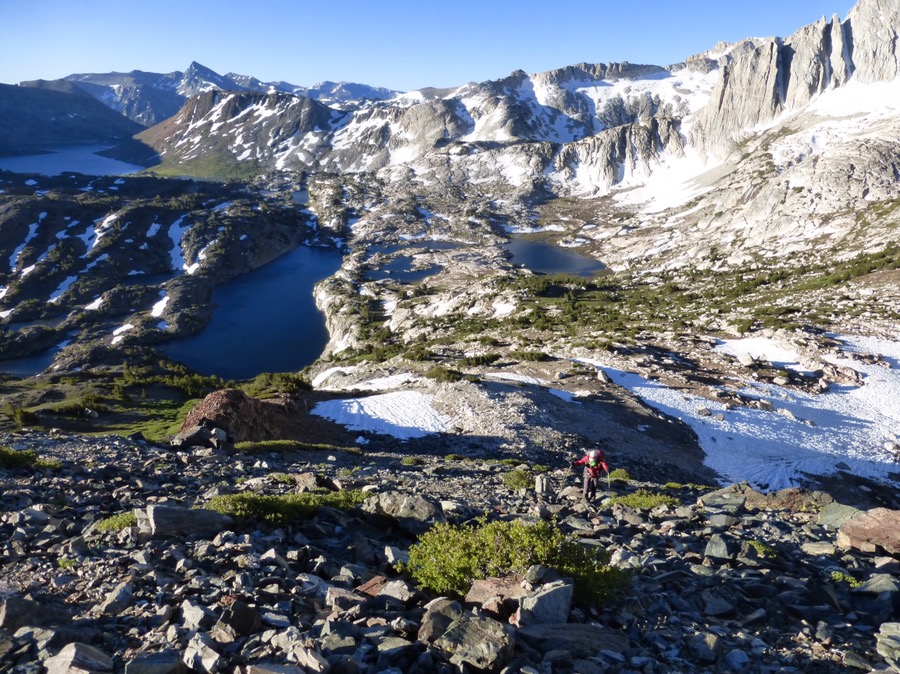 Why Not hiking up the pass. 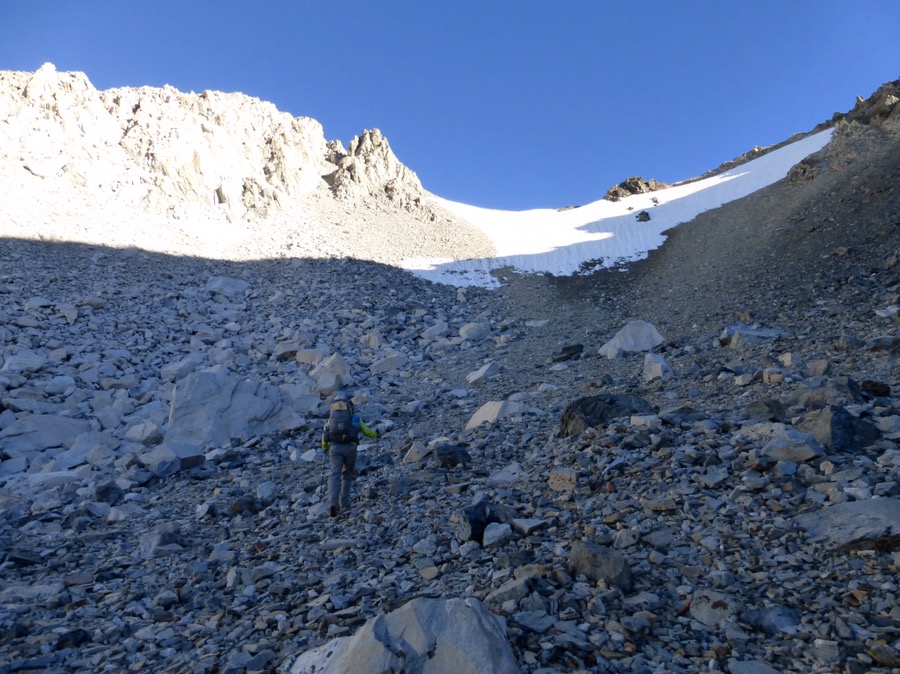 Rockin’ heading up the talus. 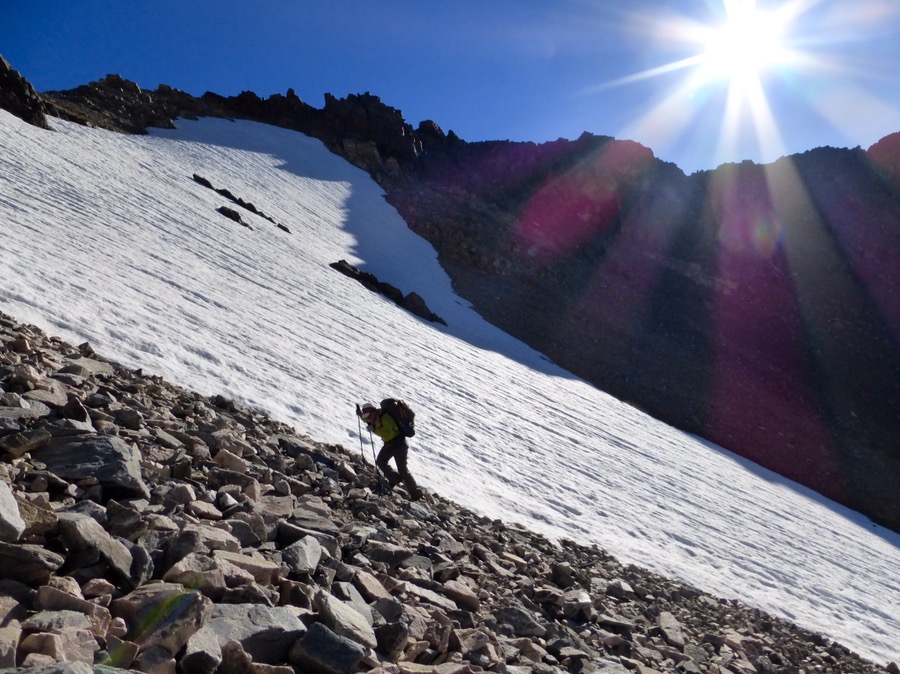 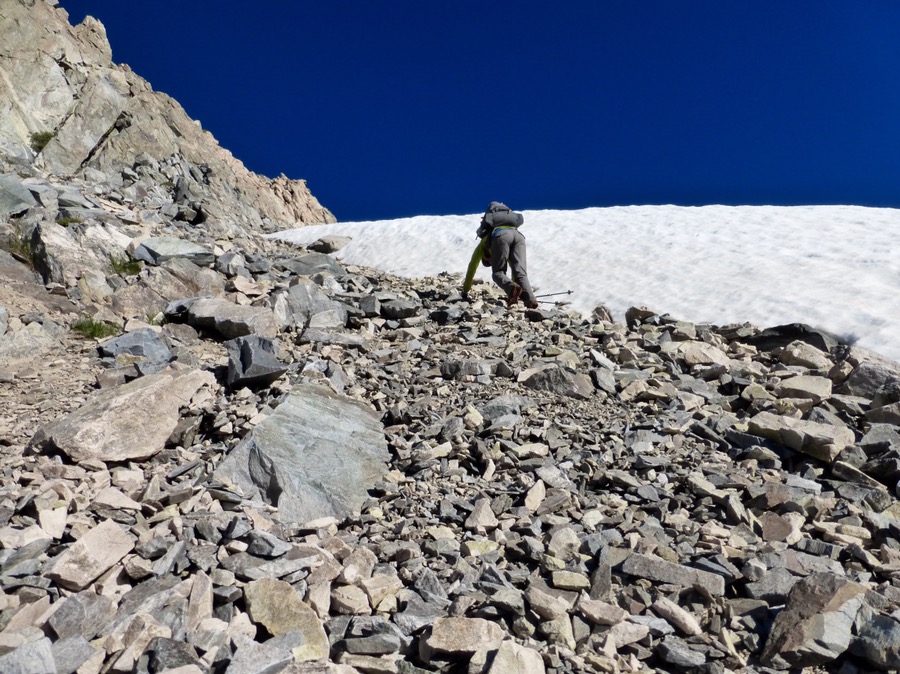 Using hands and feet to claw our way up. 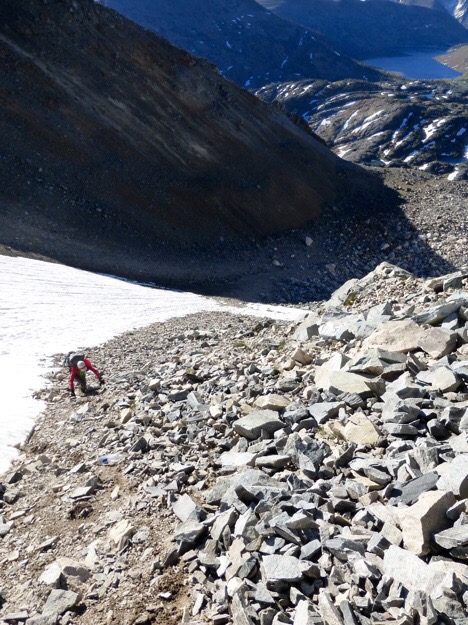 Why Not heading up the steep pass.

From there, it was large talus, and then scree and dirt on the final part. We were able to dodge the snow still lingering on top. It was so steep and loose that we were using our hands and feet to claw our way up as the scree slid down. In this process, my water bottle fell out of my pack, but Why Not was able to retrieve it. I must have set it down when we got to the top, because a bit later, I realized I didn’t have my water bottle. Doh! I made it this whole trip without losing something major and on the last full day, I lose my water bottle. For the next 24hrs, I’ll use my Platypus and just put the Sawyer Squeeze on the end. 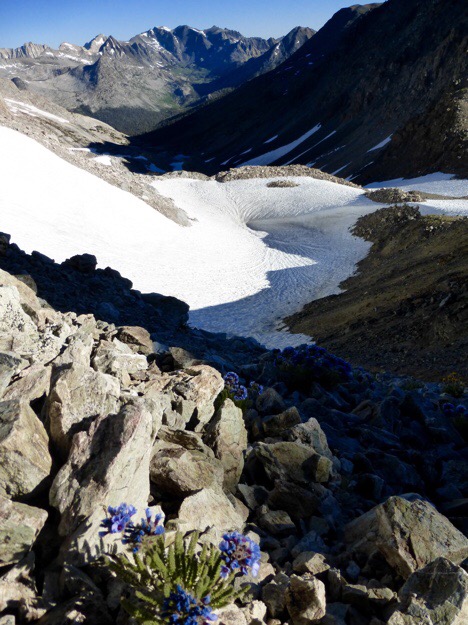 The descent off of Sky Pilot Col can be really taxing with boulders that go on forever. We have been hoping all trip that this one would have snow on the north side and thankfully it did! We were able to cruise over what would have been endless boulders. This was probably the most beneficial the snow has been for us all trip. 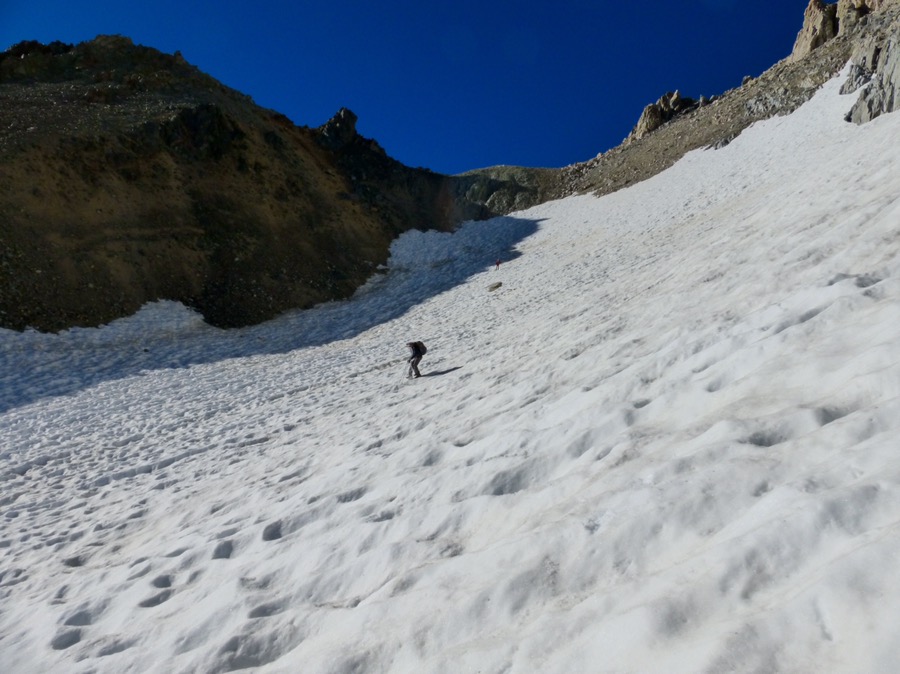 We still had some boulders to go over, but it was not for long in between snow fields. 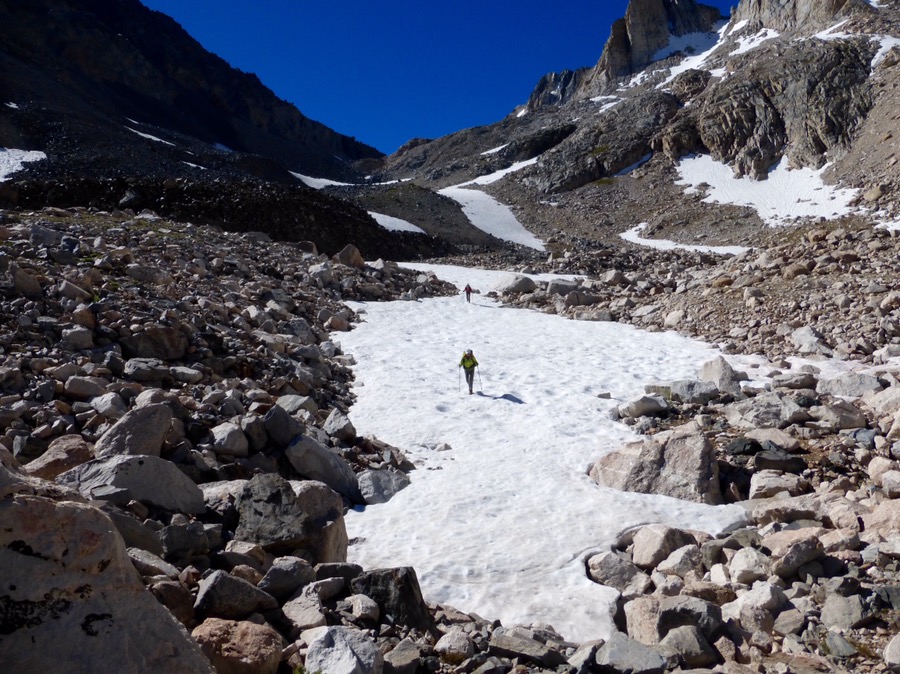 Stretches of snow between the boulders.

After Sky Pilot Col, we needed to drop down to the floor of Virginia Canyon. Much of the off trail descent was in the forest with tall grass. A very unique experience to the SHR and its alpine granite above the trees. That descent from the top of the pass to the canyon bottom was 2,550ft. 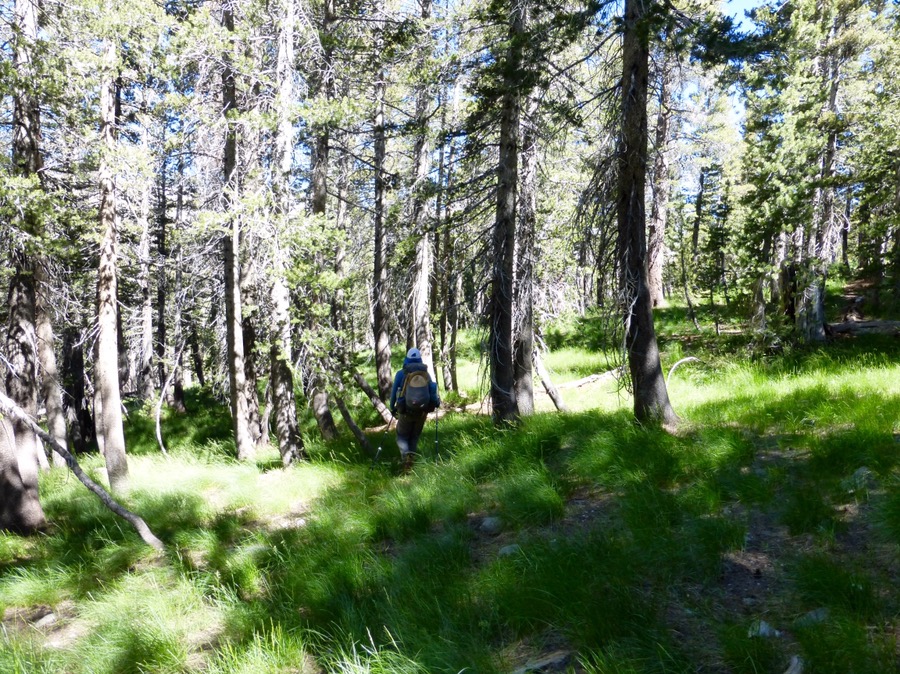 Once at the bottom of Virginia Canyon, it was 2,200ft right back up to Stanton Pass. The south side ascent is fairly straight forward once out of Virginia Canyon. Before the final climb we ate one last lunch next to an alpine lake, Soldier Lake. 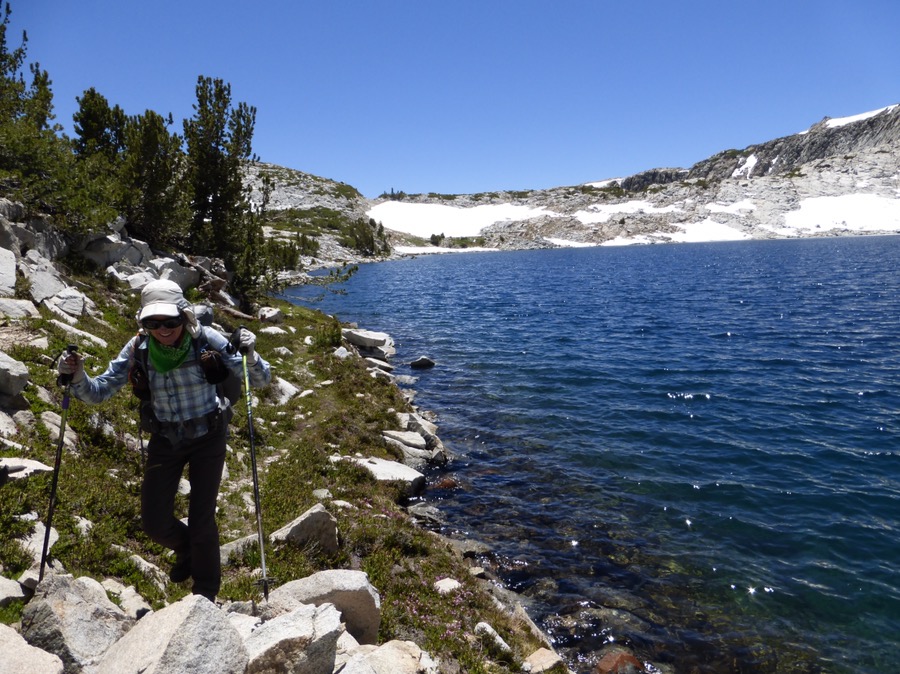 There were some medium sized boulders on the way up to Stanton Pass that were time consuming, but nothing like what we knew was waiting for us on the north side… 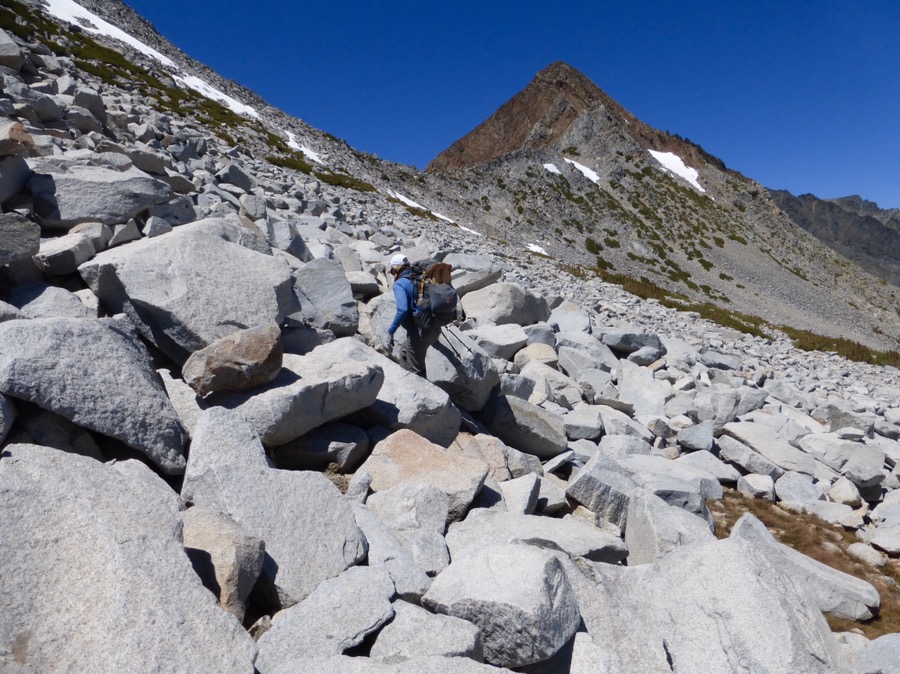 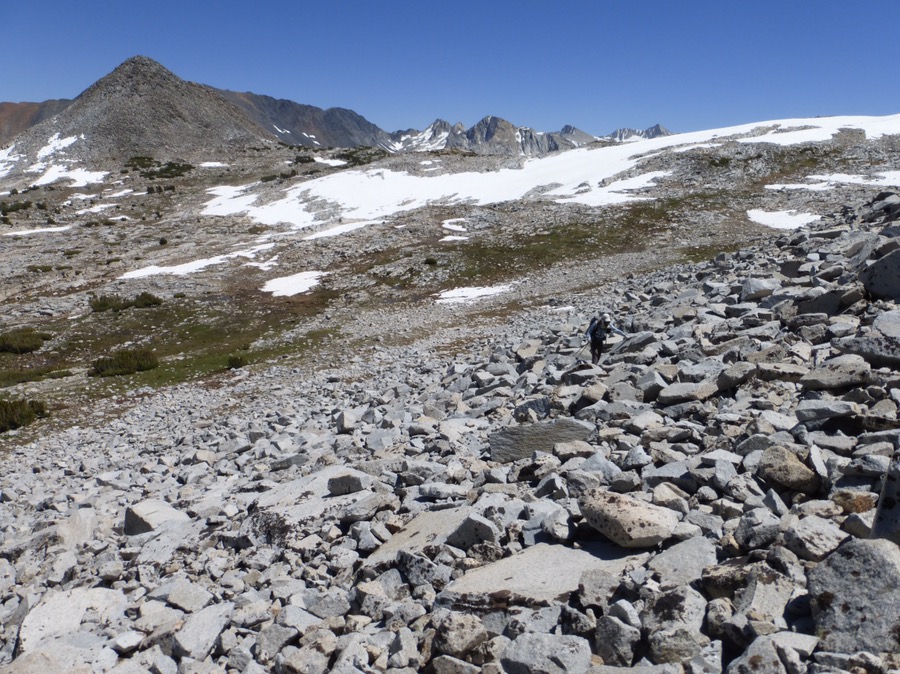 Why Not coming up boulders on Stanton Pass.

The top of Stanton Pass first appears simple with a nice green view of Spiller Canyon gradually working up to Horse Creek Pass, but it has one of the sketchiest descents near the top. 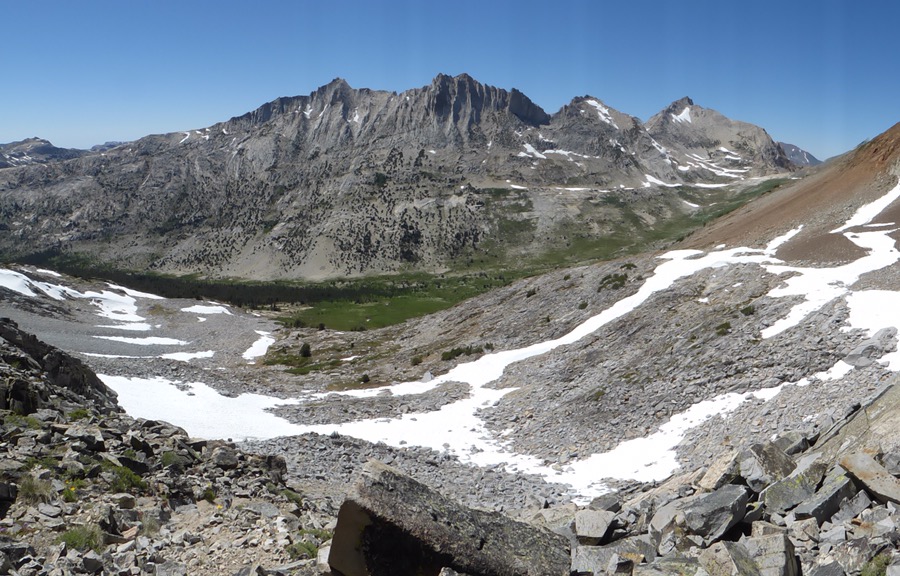 Rockin’ is comfortable on the bouldering stuff and exposure and she was super patient taking us (mainly me) step by step through the creepy spots. I was too freaked out to take many photos, but doing some of these things with a pack on is just frightening for me. Photos don’t do it justice. I’m sure Rockin’ and Why Not may have gotten better photos to depict it. I’m just glad it’s over. 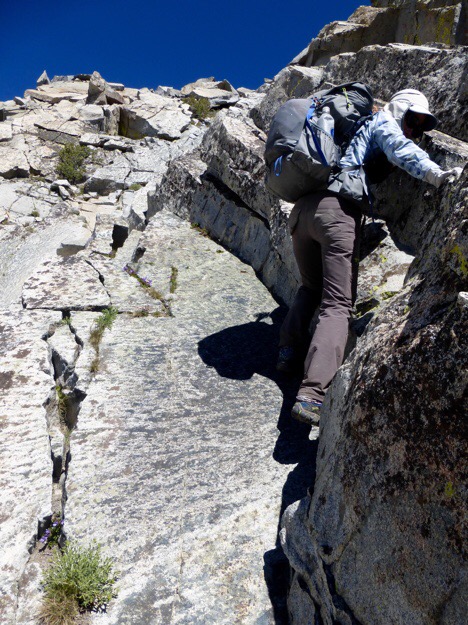 Why Not on one of the steep exposed spots that freaked me out.

Once past the sketchy stuff, it was a regular scramble, boulder, grass combo to the bottom. 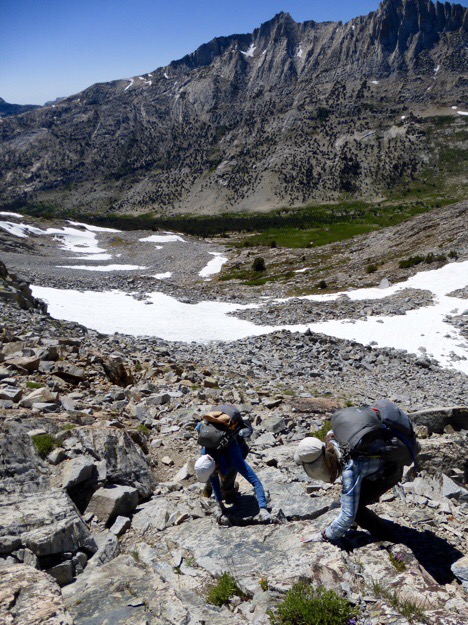 Why Not & Rockin’ heading down. 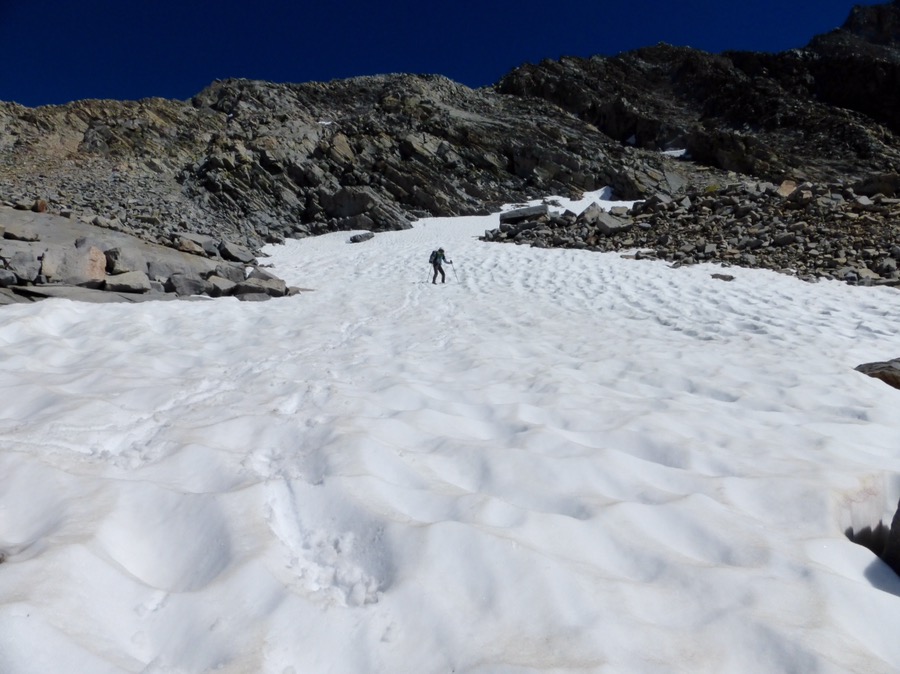 Still some snow to boot ski down.

We realized we had enough time to head up toward Horse Creek Pass and wanted to camp as close to the top as we could. It was a nice gradual up in a grass filled open valley. 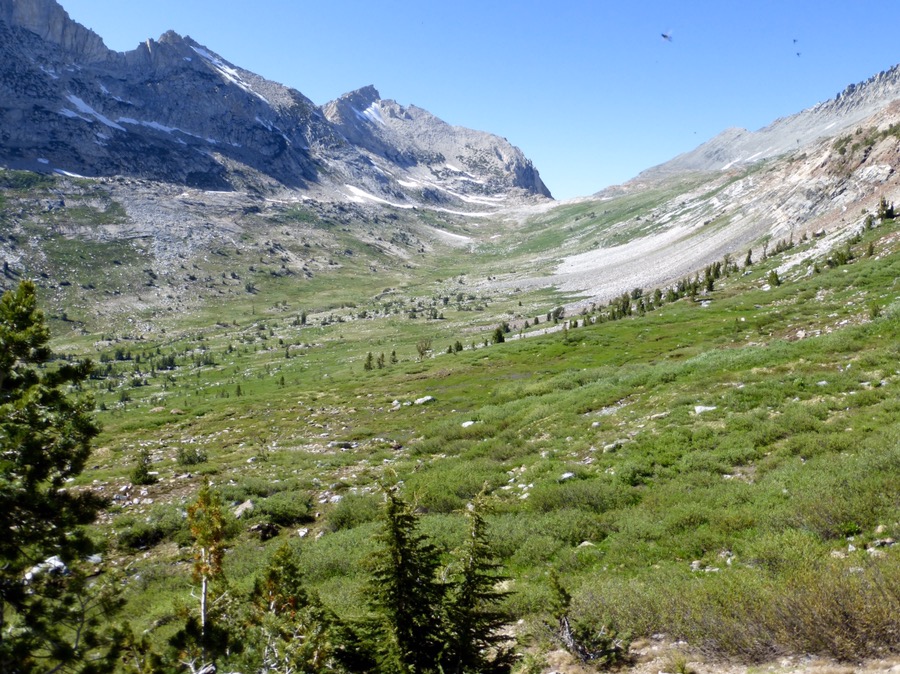 Heading up to Horse Creek Pass, our final pass!

We didn’t intend to, but we ended up coming all the way up the pass to find camping for all of us. It’s a wish come true for all of us that we got to camp at the top of a pass on this trip. Rockin’ has camped on a pass many times, but this is a first for myself and Why Not. A great spot to have our final night. 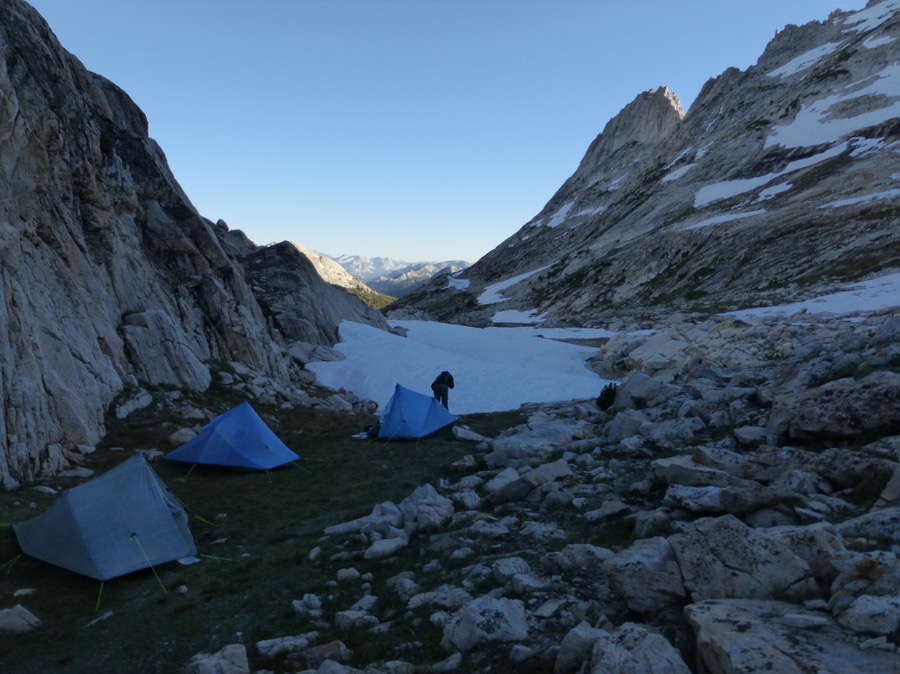 Campsite on Horse Creek Pass (our final pass!) looking back on Spiller Canyon.

Today felt like a lot of elevation gain/loss. We were rarely hiking level today with long ups and downs. We calculated it roughly and got 4,161ft of uphill and 3,850ft of downhill over a total of 9.8mi. That’s quite a bit for cross country hiking in one day and we are all going to sleep well tonight. Tomorrow is the last day! We have about 6mi with 3,500ft of downhill to the trailhead where LoveNote is picking us up, yay! Super excited about all of it!