First off, I want to say that I think I’ve finally acclimated to being out here in high elevation! I am feeling more energized and like my regular self. I do wonder if it’s an illusion because today was mostly relaxed. We’ll really test the theory when we are back off trail and cross country tomorrow.
Today was trail day! Some people who do the Sierra High Route really get frustrated when it has its short periods where it overlaps with the John Muir Trail. I have really welcomed it so far to get a mental and physical break from the off trail stuff. We had it happen for 5mi last week at Mather Pass and today is a whopping 15mi section from LeConte Canyon, over Muir Pass, through Evolution Basin, and stops just before entering Evolution Valley. Yes, a really great section of the JMT! We got our usual 6am start and first had 4mi to go doowwnn the Bishop Pass Trail to LeConte Canyon. It was pretty great to cruise and listen to music.

Rockin’ at the top of the descent to LeConte Canyon (seen left). 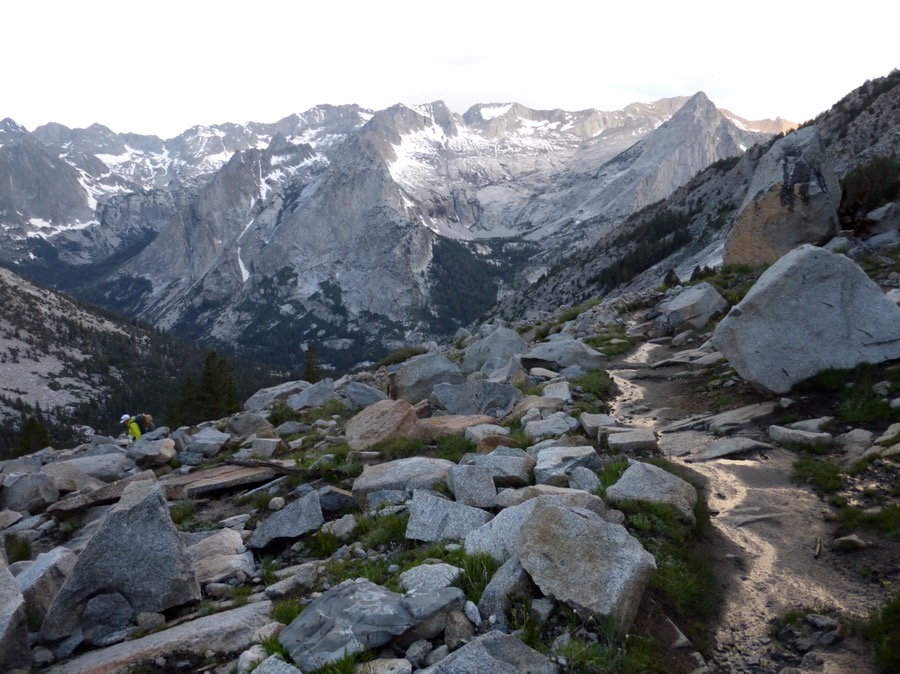 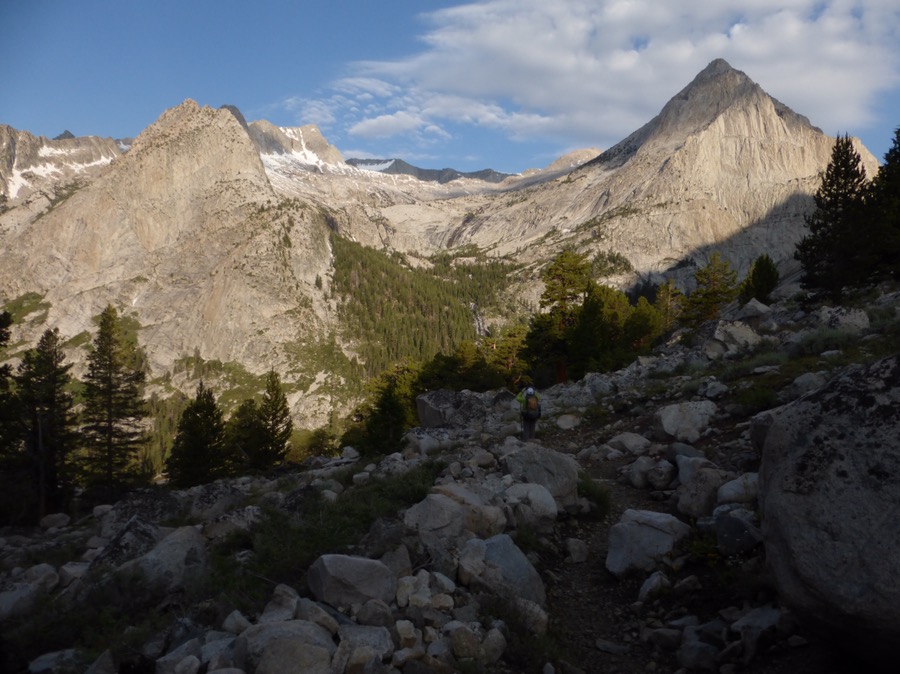 Morning light hitting the mountains on the way down.

Once in LeConte Canyon, we were on the JMT/PCT for 15mi, wahoo! 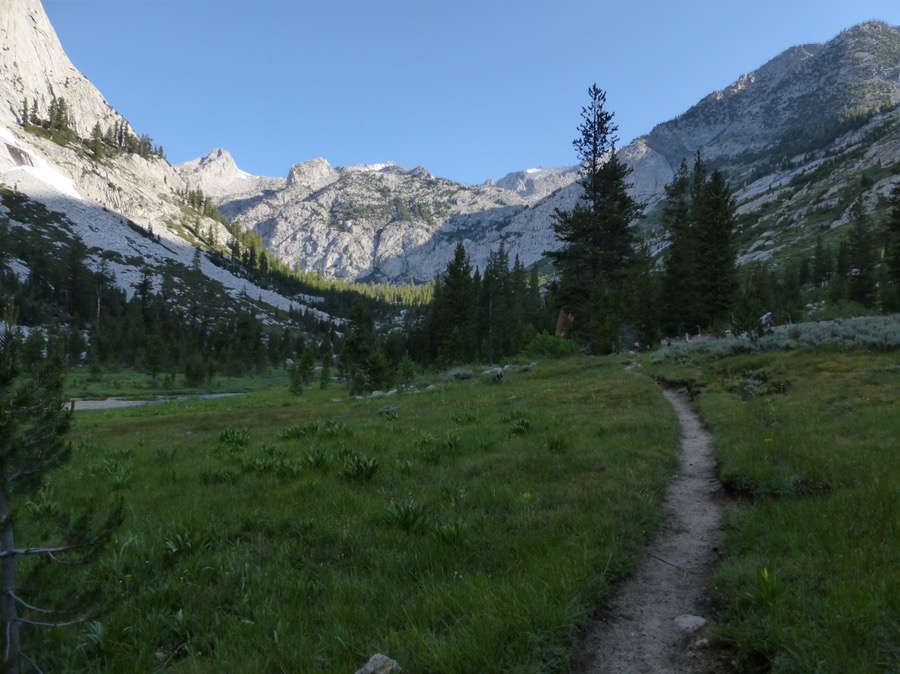 LeConte Canyon on the JMT.

We got to the rock monster and had to take some photos. 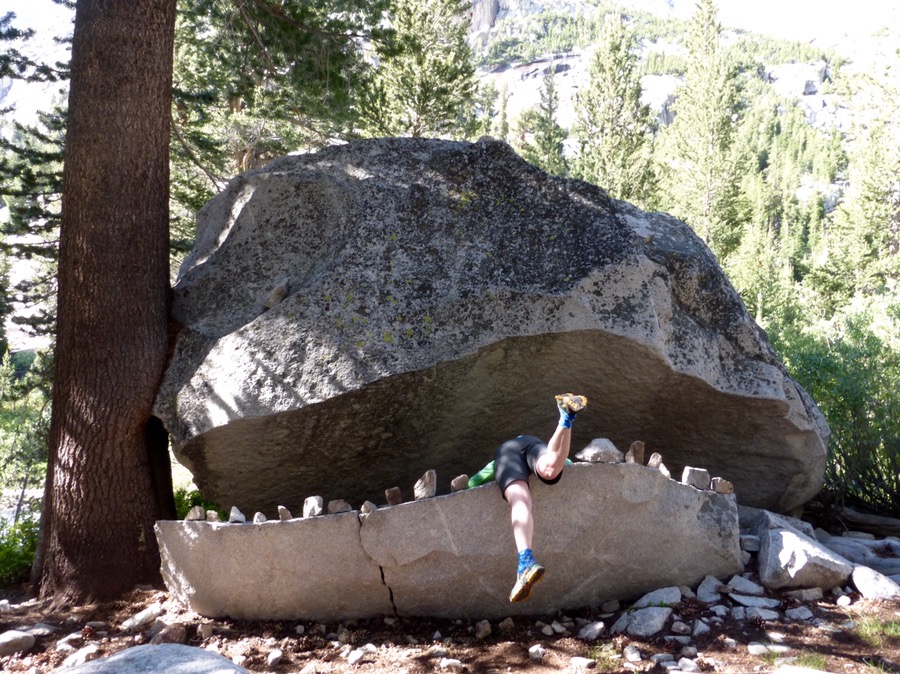 We leapfrogged with some PCTers up to Muir Pass. One woman was in front of me and I asked her her trail name. She said it was Wing-It and I told her I had a Wing-It on trail when I did the PCT in 2011. It was the same Wing-It ha! Small world. 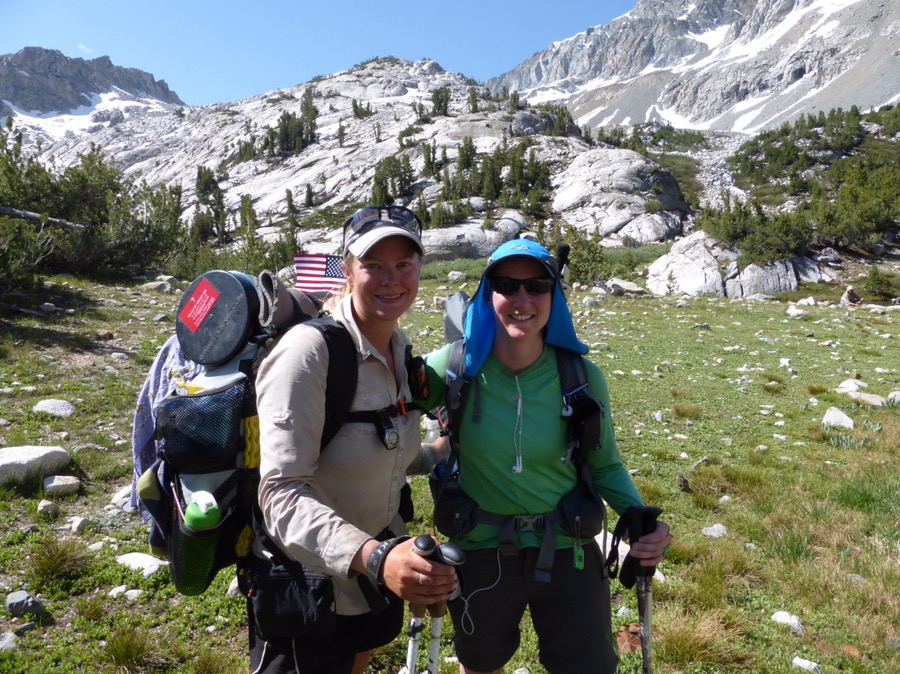 Two of the PCTers had seen my blog, so that’s cool. We all made it up to the Muir Hut around 1pm as storm clouds gathered and thunder rolled. There were stretches of snow coming up the south side of Muir, but the north side was predominantly snow. 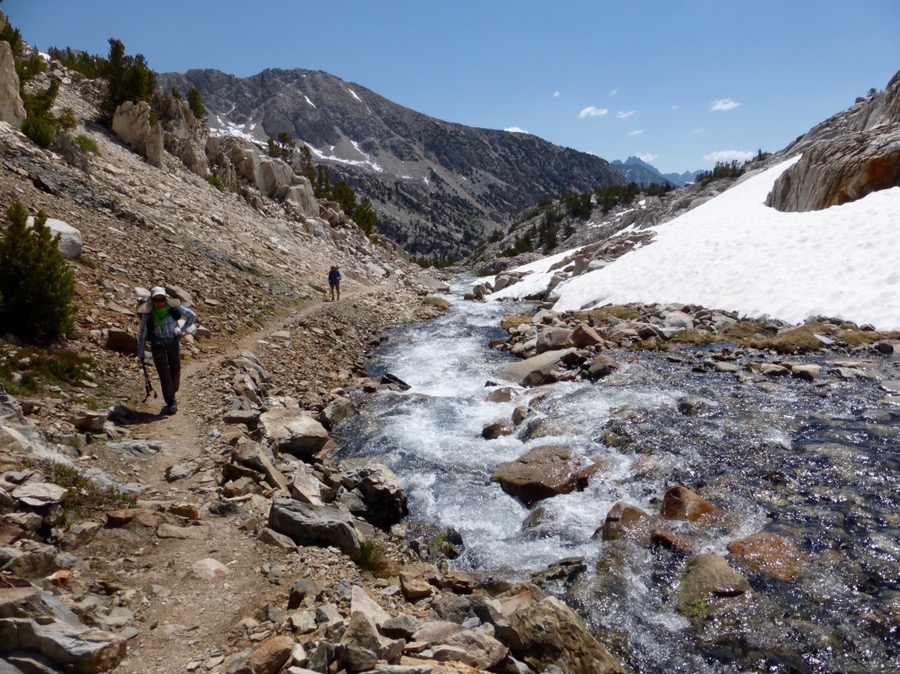 Plenty of run-off and overflowing streams as we hiked up to Muir Pass. 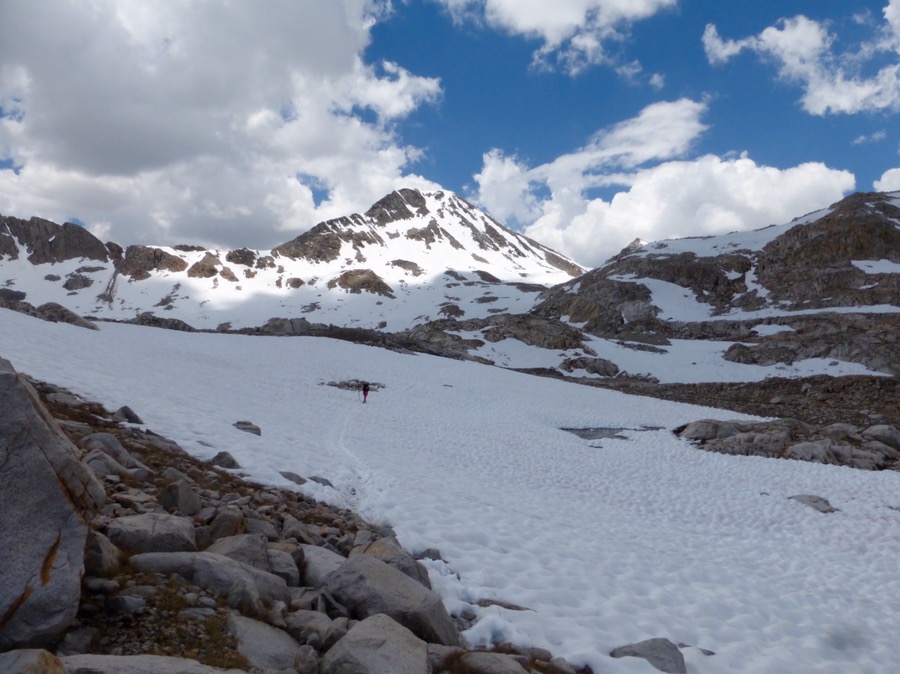 Snow as we ascend Muir Pass. 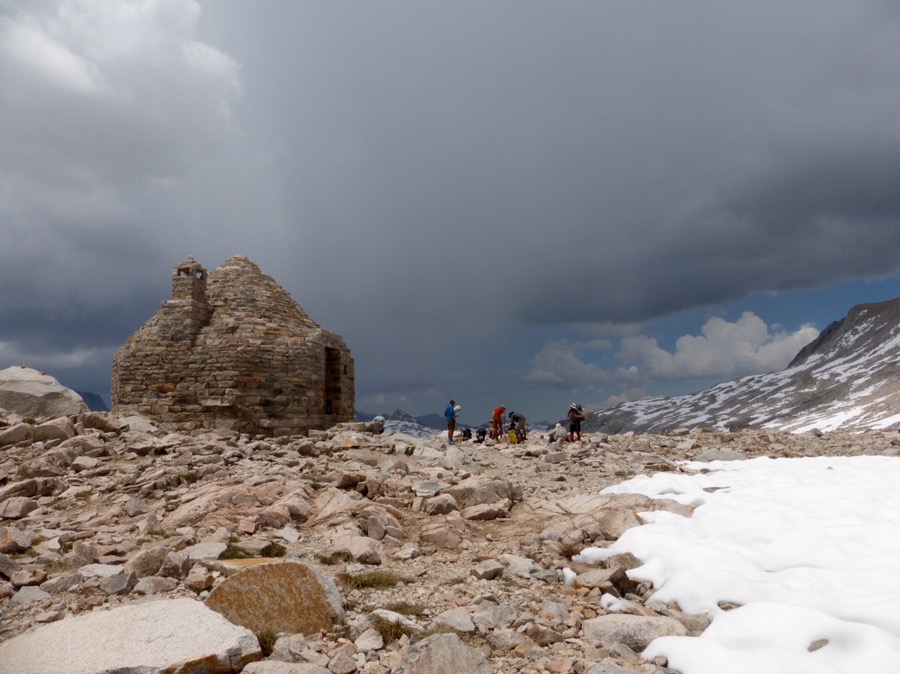 It rained and thunder rumbled for an hour as we made our way down. That’s twice in two days I put the umbrella to use and I’ve been using it often to shield from the sun while hiking and at lunch. 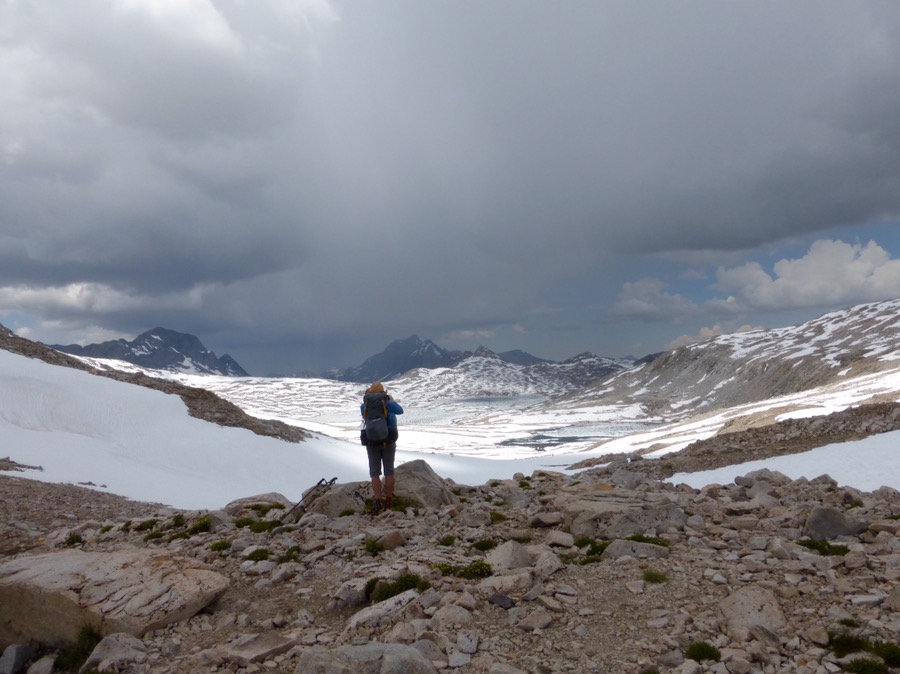 At the bottom of Muir Pass is the rock that inspired the name of Rockin’s blog, Lady On A Rock. Years ago, Rockin’ saw an older woman that was section hiking the PCT sitting on that rock. That’s the first time she ever heard of thru-hiking or a woman going out there solo. The rest is history! What’s really cool is that years later, through a follower on my blog, Rockin’ was connected with the woman who she saw years ago sitting on that rock. Also, last summer, we found out that a thru-hiking friend of mine was inspired to thru-hike when she met the same woman in Northern California on the PCT. What a wonderful world! 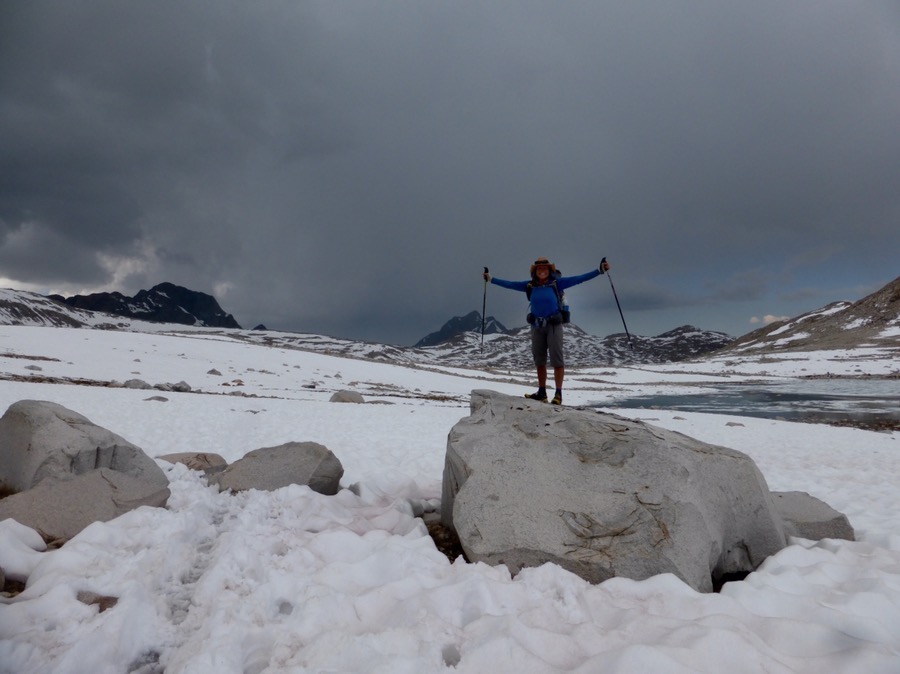 Rockin’ on the Lady On A Rock rock.

We cruised the rest of the afternoon on the JMT passing through the pretty awesome, lake-filled, Evolution Basin. 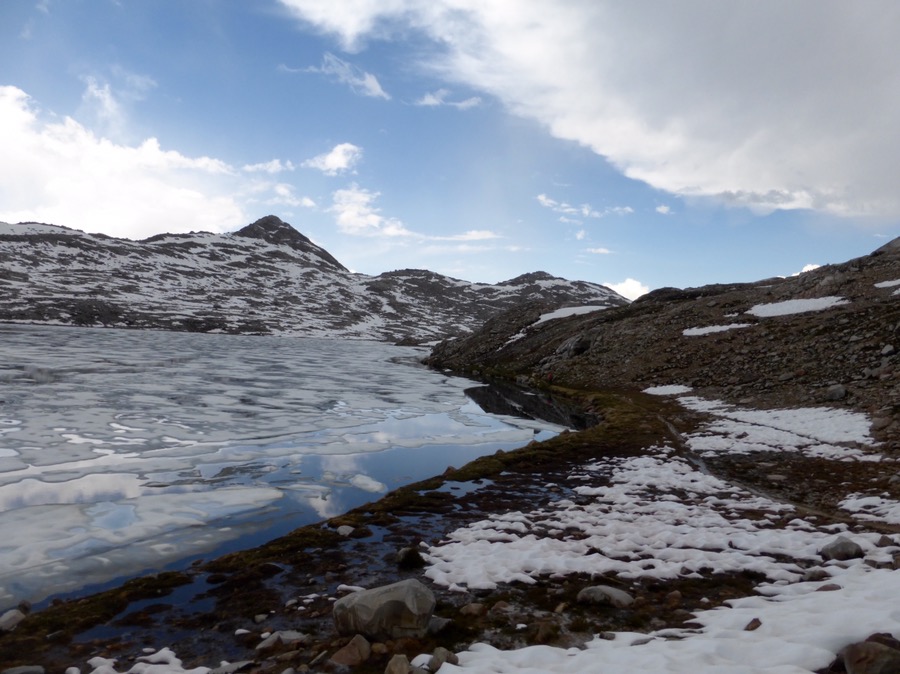 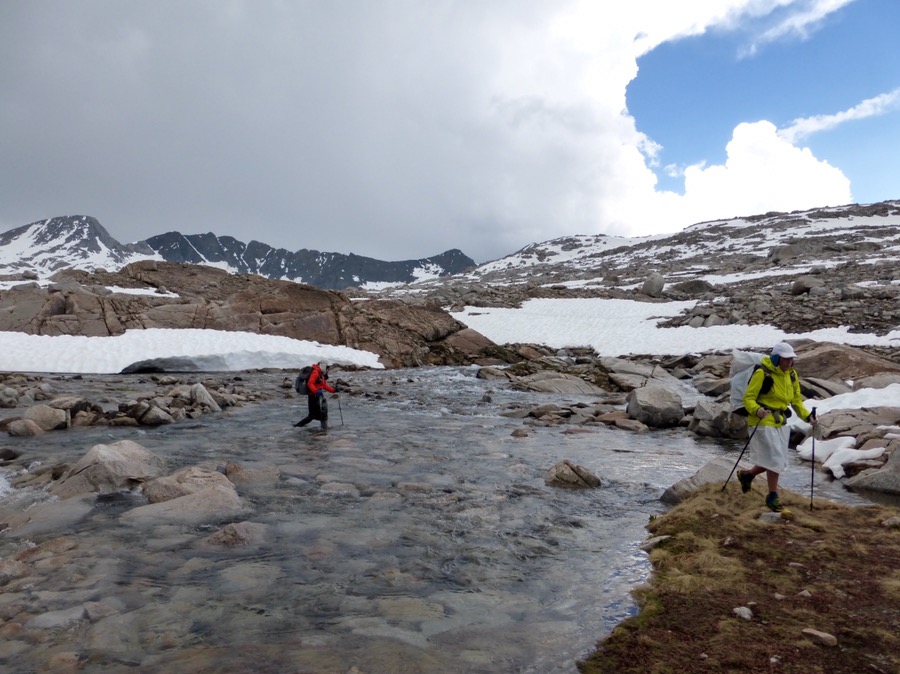 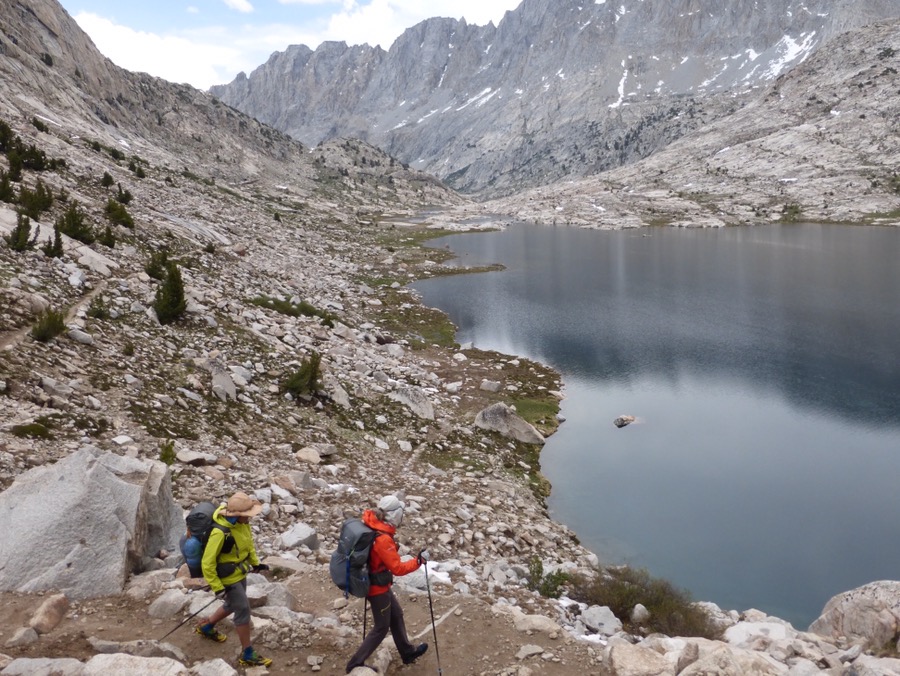 At the end of the day, we forked off the JMT, and back to the cross country of the SHR. We came off the JMT just before it dropped into Evolution Valley. Our directions were to just contour along some benches at a certain elevation for 3mi. 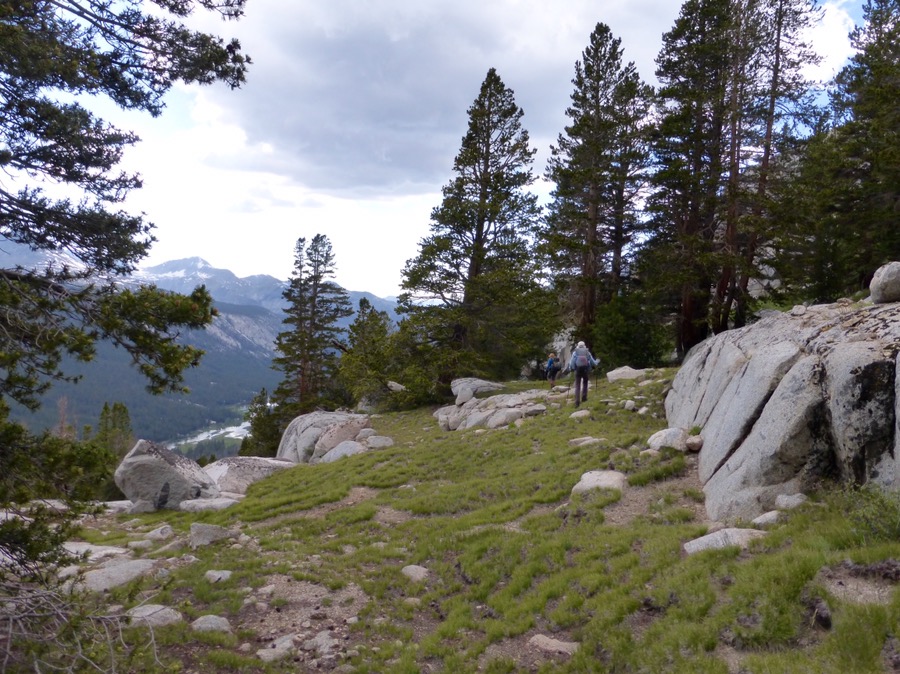 We stopped at 6:15 after 2mi of the cross country near a stream and a nice level spot to pitch the tents. We would have liked to get higher for the best view, but it had been a long day with really heavy packs. This will probably be our biggest mile day on the SHR. 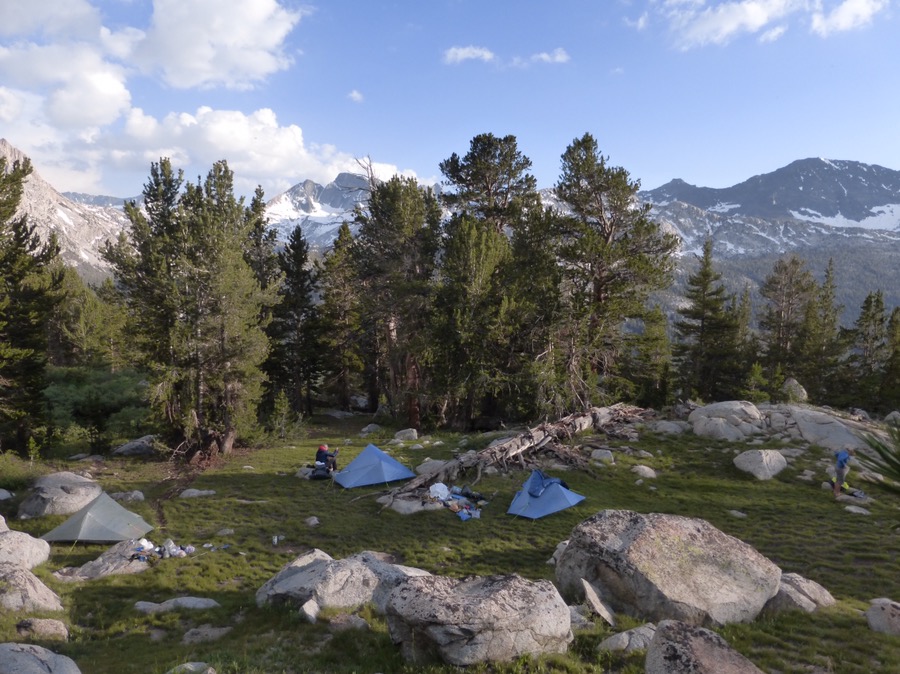