Day 1: Setting Up For The Big Dance

It was a relaxed start to the day waking at Pyrite and Chinchilla’s. Since we knew our mileage didn’t need to be huge to setup our timing for Wind River Peak tomorrow, we didn’t have to get too early of a start. We had pancakes at the house and all left for our respective trips at the same time. Pyrite and Chinchilla let us drive their truck about an hour to the trailhead and leave it there for them to pick up on their way home from their climbing trip this weekend. Really, it can’t get much more convenient than that! 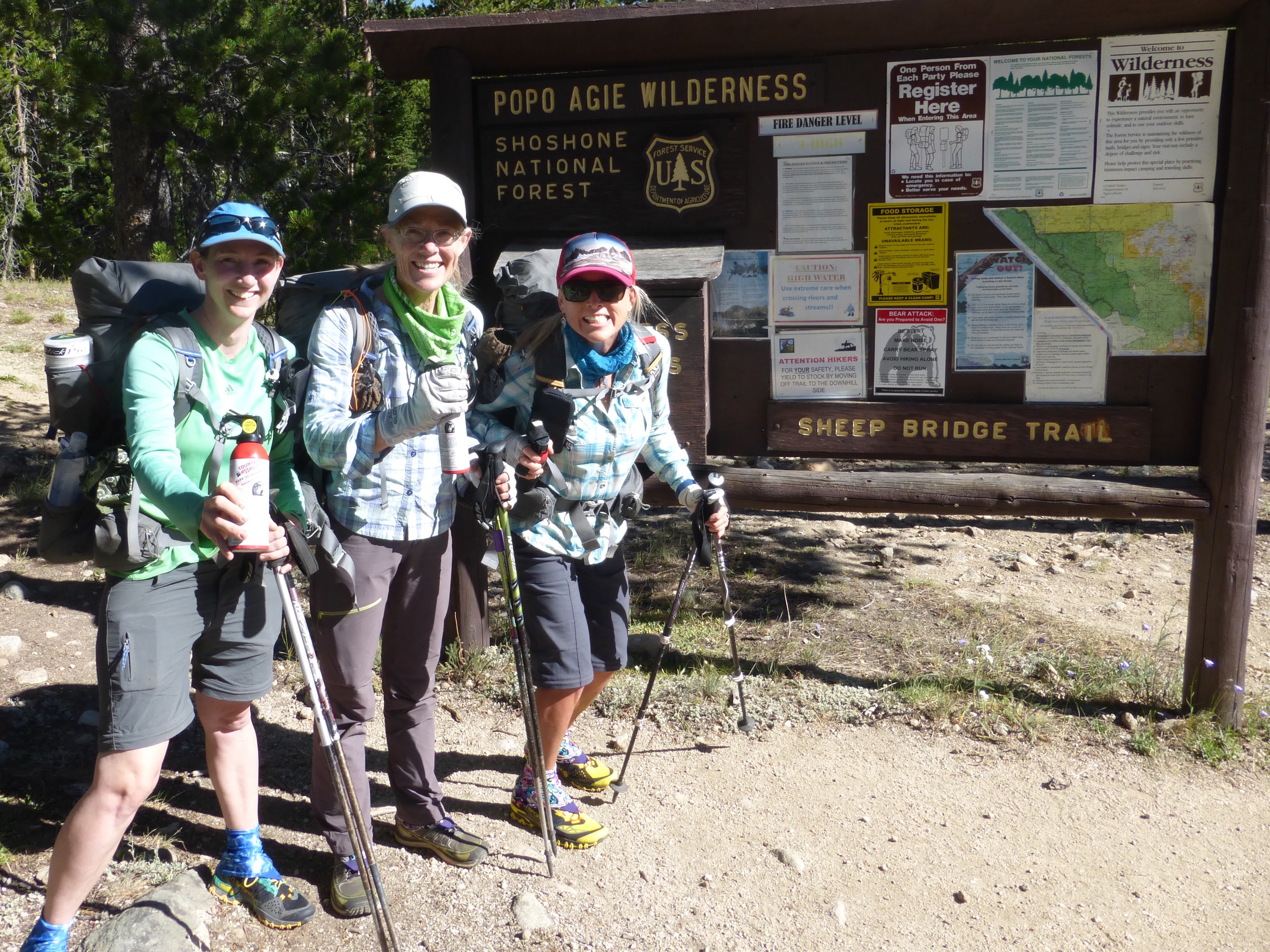 Start photo at Sheep Bridge Trail and armed with bear spray for those grizzlies up north.

We got started around 10am and had a mostly forested hike in today. The whole purpose of today is to get as high as we can and still have protected camping before summiting the 13,192ft Wind River Peak tomorrow. That gave us about 13mi of on trail hiking with ups and downs, but an overall gain of something like 4,500ft. It was pretty uneventful with the consistent scenery of a dusty, rocky, lodgepole forest. 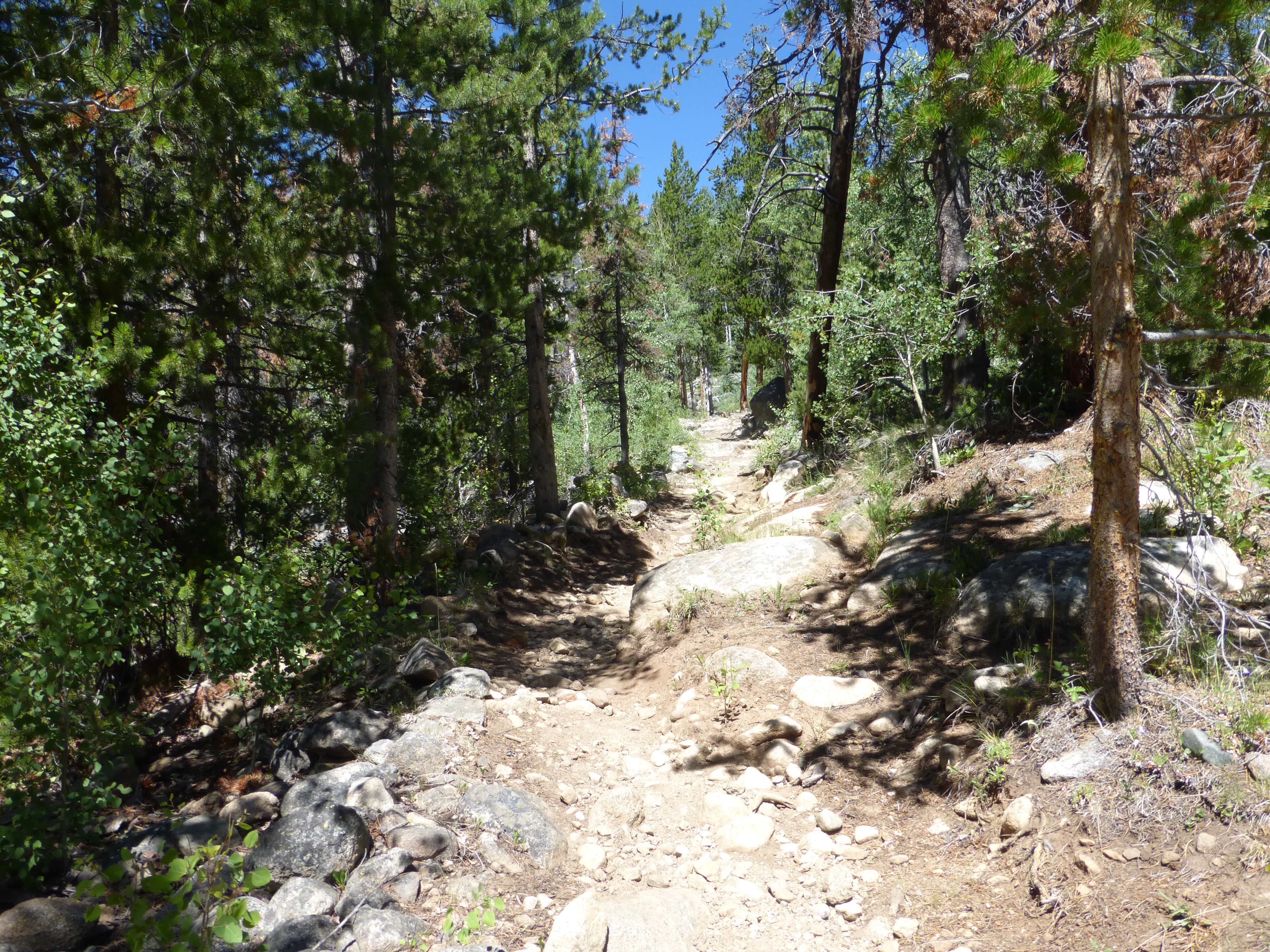 We saw 6 other backpackers and four hikers, and they were all women ranging from 19-60yrs old. It was great to see! The only guy we saw was riding horses with his wife. Half of the women were on trips that lasted five nights and that was even cooler. It was definitely fun to see so many women out on the trail. The area we hiked into is the Popo Agie (pronounced po-po-zsha) in the Shoshone National Forest. 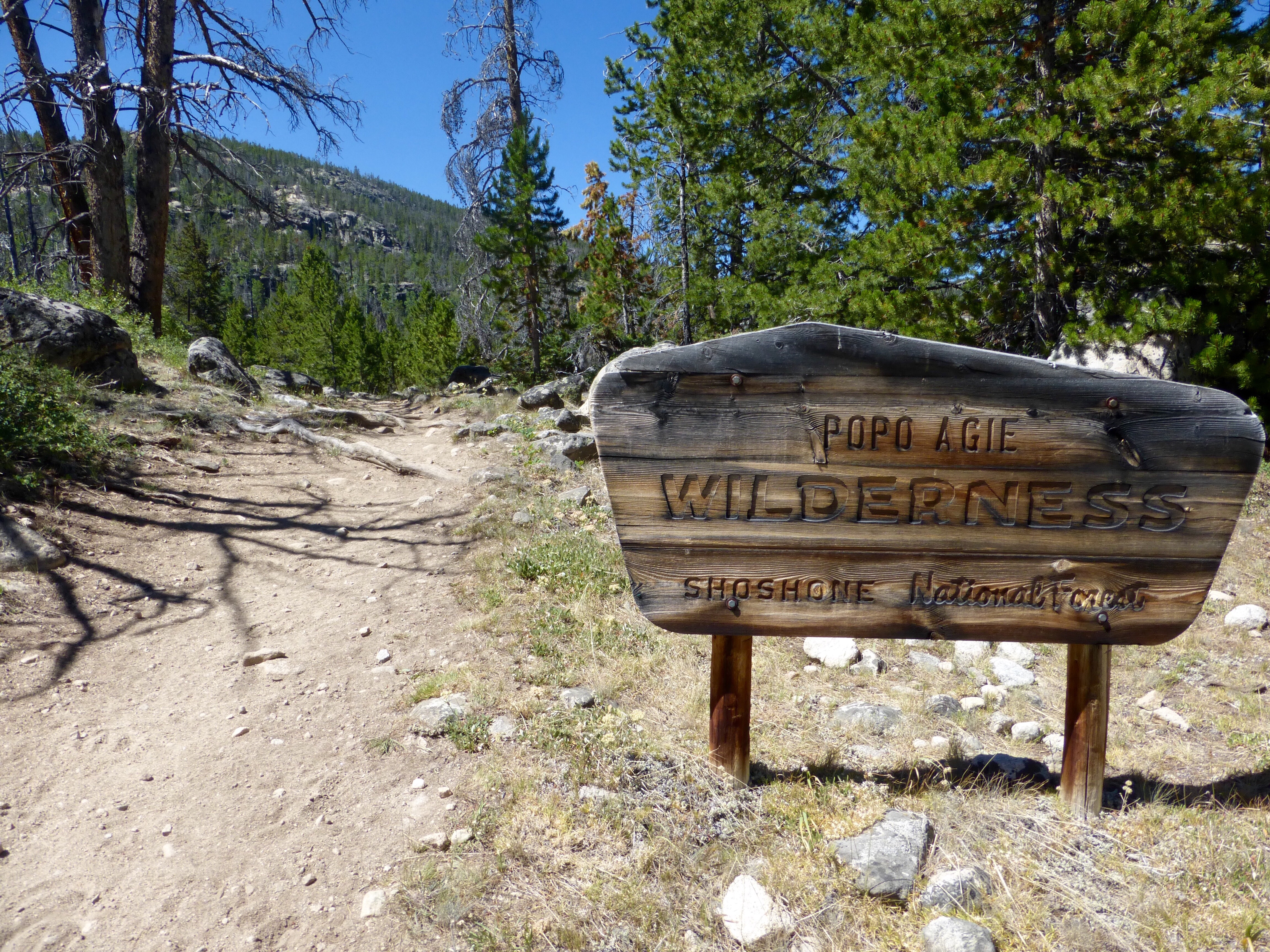 90% of our lunches and campsites seem to have been along a lake with quite a scenic vista. Well, today was the exception and we ate right along the trail in a forested area. The new gear for this hike is the UrSack and Bear Spray because there are bears and even grizzlies as we get to the northern half. I’ve never carried an UrSack and the verdict is still out. It’s lighter than a bear canister and bear proof (but still not officially accepted where bear canisters are required). Since canisters aren’t required (like in the Sierra) and we will possibly be above treeline when we camp, the Ursack (with and OPsak/odor proof sack inside) is convenient. My concerns are if mice will find a way to wiggle in the drawstring top and if a grizzly really comes, will whatever we tied the sack to (if it isn’t hung) be strong enough to keep the bear from just walking off with the whole bag? We all aren’t too sure about all that. The only reason to have the UrSack over just hanging is to be able to tie it to a rock or something when you can’t hang. I just wonder if a bear could easily undo the knot or somehow get the bag off whatever it is tied to. Well, I just have to have faith in it cause it’s either that or a bear canister and I’m happy to get a break from that for awhile! 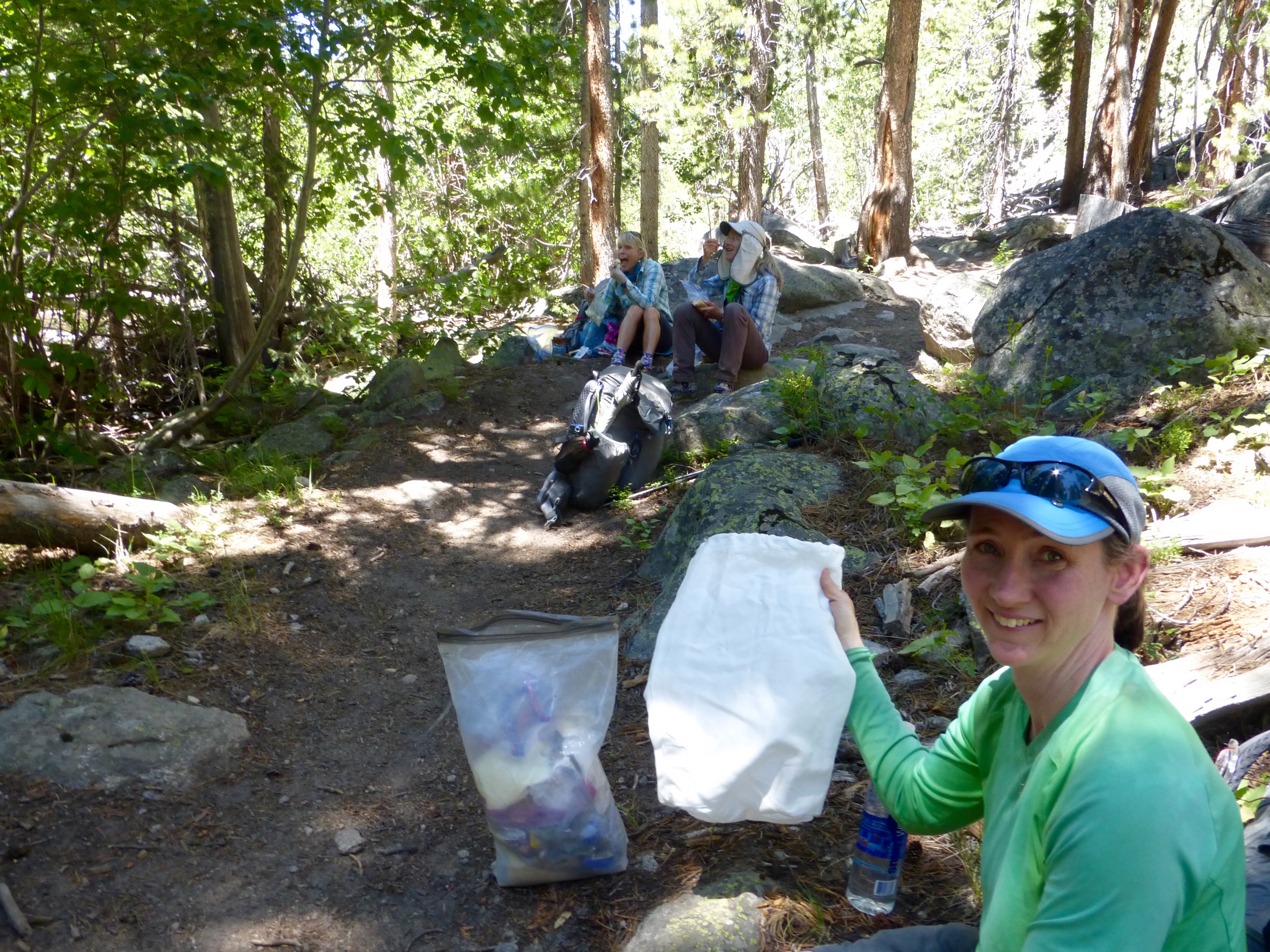 Lunch along the trail along the Middle Fork of the Agie River with my OPSak and UrSack.

Late afternoon, we finally broke out of the forest at Deer Lake, but then we had to pay attention for the first time because we were headed off trail. 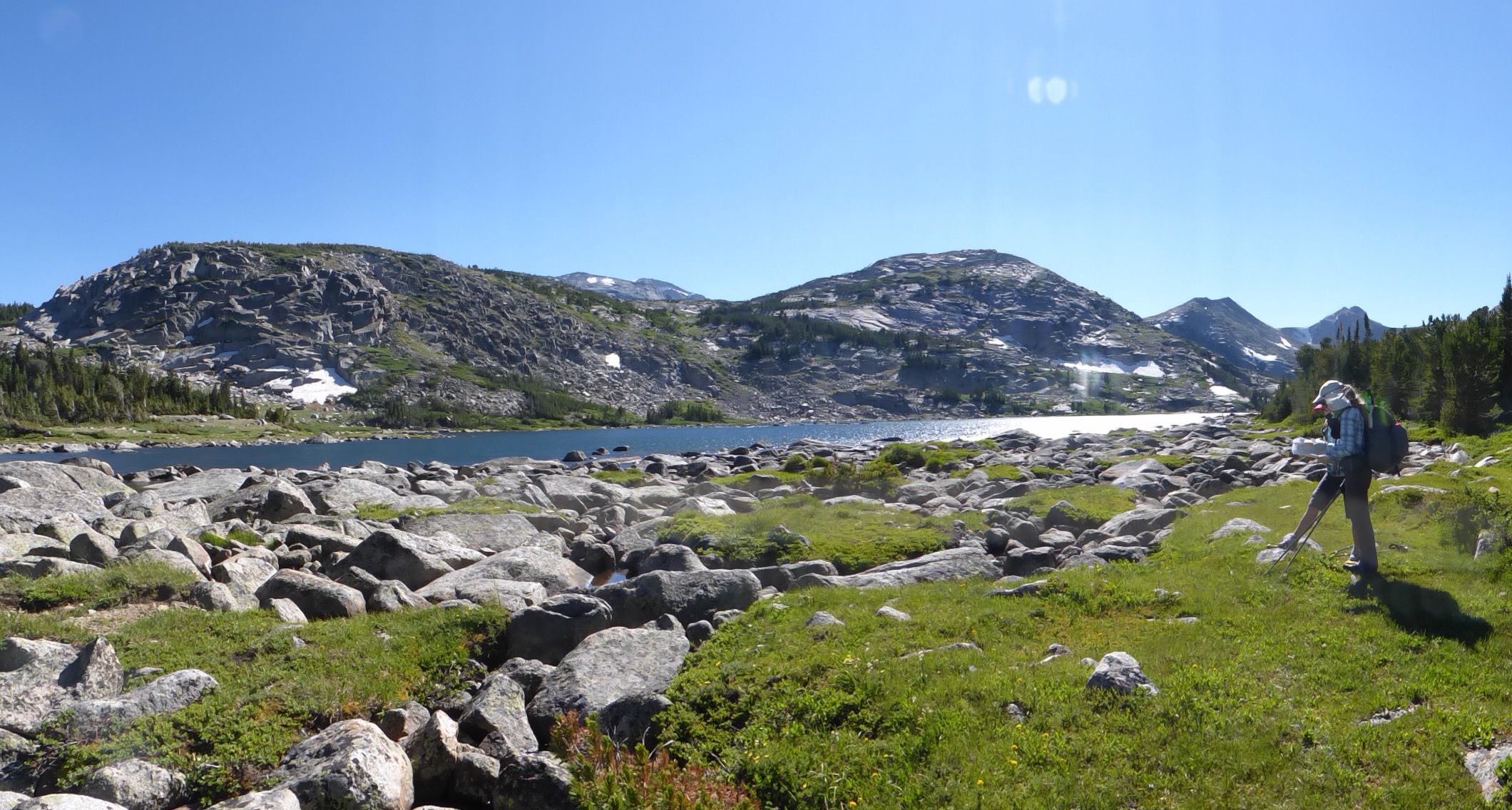 Checking maps at Deep Creek Lake once we broke out of the forest.

It was at this point that we realized there was going to be an adjustment to thinking and seeing like Andrew Skurka (whose WRHR packet and maps we have) when we had gotten so comfortable with incomparable Steve Roper on the SHR. It’s still early on, but having used Skurka’s stuff in the past, they aren’t exactly detailed, but he intentionally wants to give just enough information to give the way without spoon feeding you. That is appreciated, but the resources for the WRHR don’t flow very smoothly. It’s a terrible coincidence that the point at which we head off trail today is at the edge of the map and the maps don’t overlay at all, so we had a tough time visualizing it when half was on one side of the map and half was on the other. Also, so far we can see on the maps that there are some important waypoints that work as essential locations for important junctions where things happen. Well, Skurka has them labeled on the map with one incomplete description, and then we have to look at the data sheet for another brief and more helpful description that is omitted from the map. So, we have to hold three sheets of info that don’t flow naturally together. One verbal paragraph description that makes little reference to waypoints on the map, one map with incompletely labeled waypoints, and one spreadsheet of a data sheet with other descriptions of the same waypoints. There is incomplete overlap in beta on each of these and you kinda have to piece it together. It seems almost that it was rushed and not edited or given a final review. The majority of the beta could easily be on any one of these sheets. Maybe it will improve with time with this feedback.

I’ve used Skurka’s beta on the Hayduke and maps for the Sierra High Route. It’s something to beware of with his stuff. It’s not a professional guidebook by any means and gets by, but it could have more content and quality. It is an adjustment to each author’s way of explaining things, and we had a few growing pains today after having such an amazing guidebook on the SHR from Steve Roper. Yes, mapping is not easy and takes time, and we could just shut up and make our own route if we don’t like the way it’s given, but this is more of an observation in comparison to the many more professional map makers and guidebook writers. Skurka’s maps will get you by, but don’t expect high quality here at all.
We made our way up to where we wanted to camp. There was some strong gusts, so it took a bit to find a spot we all were comfortable with. Because of this being bear country, we cooked and ate away from camp. 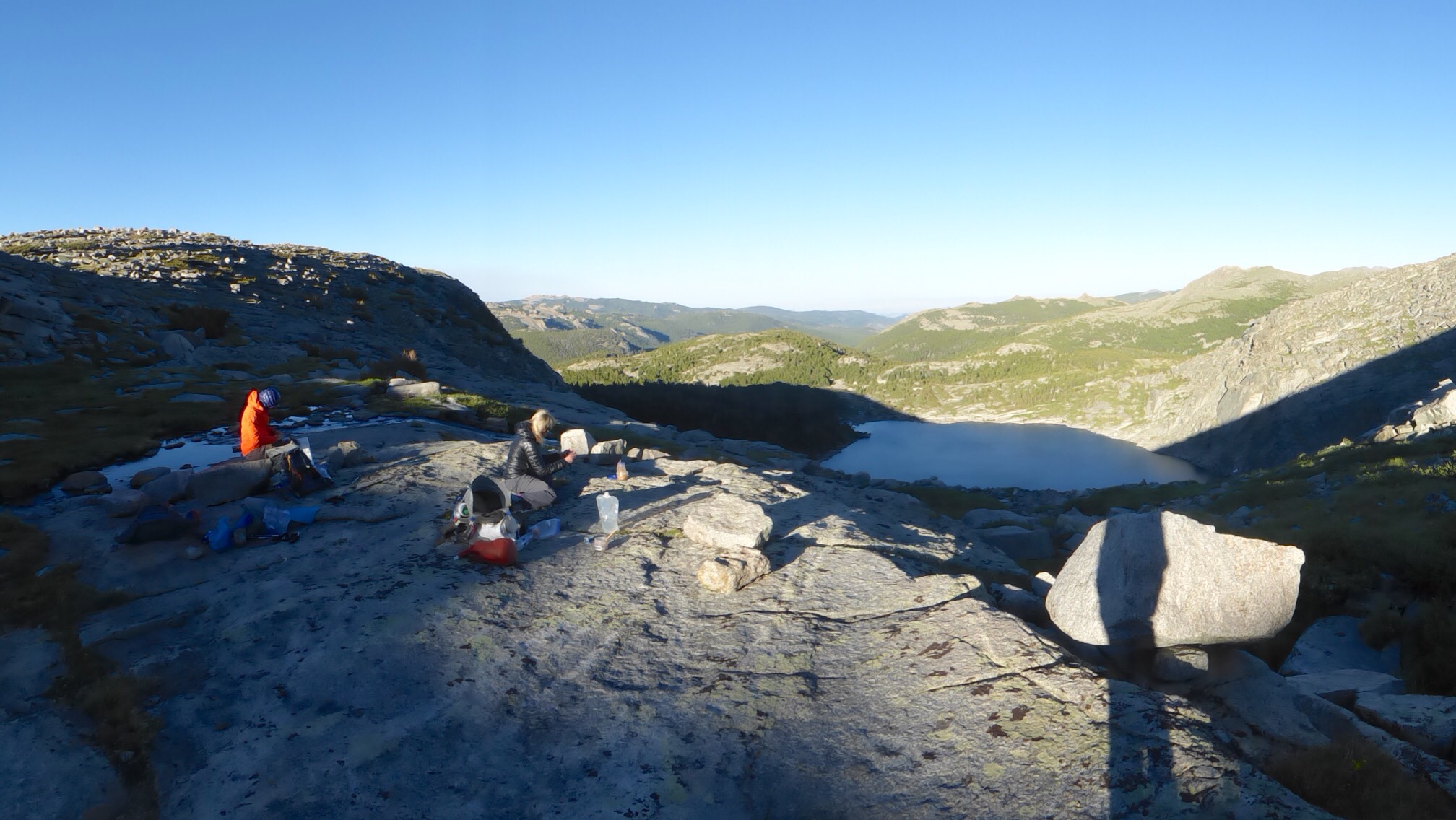 Then we hiked away a short bit to pitch our tents around. It was not the most relaxed routine, but it’s the new normal out here and just part of hiking in bear country. Our UrSacks are hopefully strongly cinched and securely attached to a solid trunk of a bush nearby. 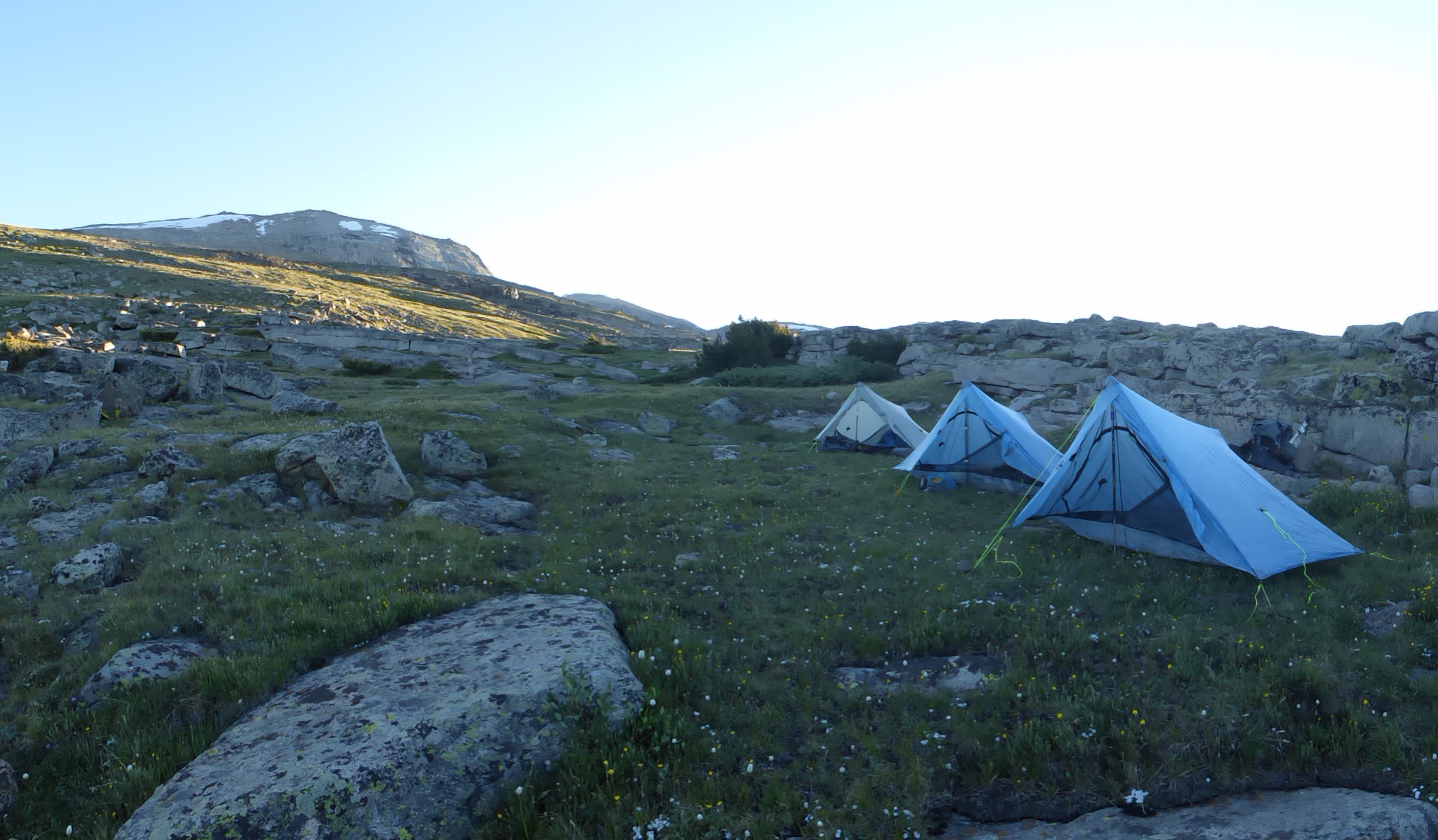 We don’t think we can fully see Wind River Peak yet, but we will head up the ramp tomorrow over that peak behind the tents.