Day 2: The Best Kind Of Tired

Oh man, it was cold this morning. I was cold overnight as well. I think I should have eaten one more thing before I went to bed and that would have helped. It seemed to dip near freezing, but as soon as the sun started to hit the rocks things heated up plenty.

We started off with a nice walk up to Pterodactyl pass just around the corner from where we camped. Still we are shocked at the kindness of the terrain. We’ve yet to hit a field of extended boulders or talus and we’ve been able to maintain a stride for the most part. 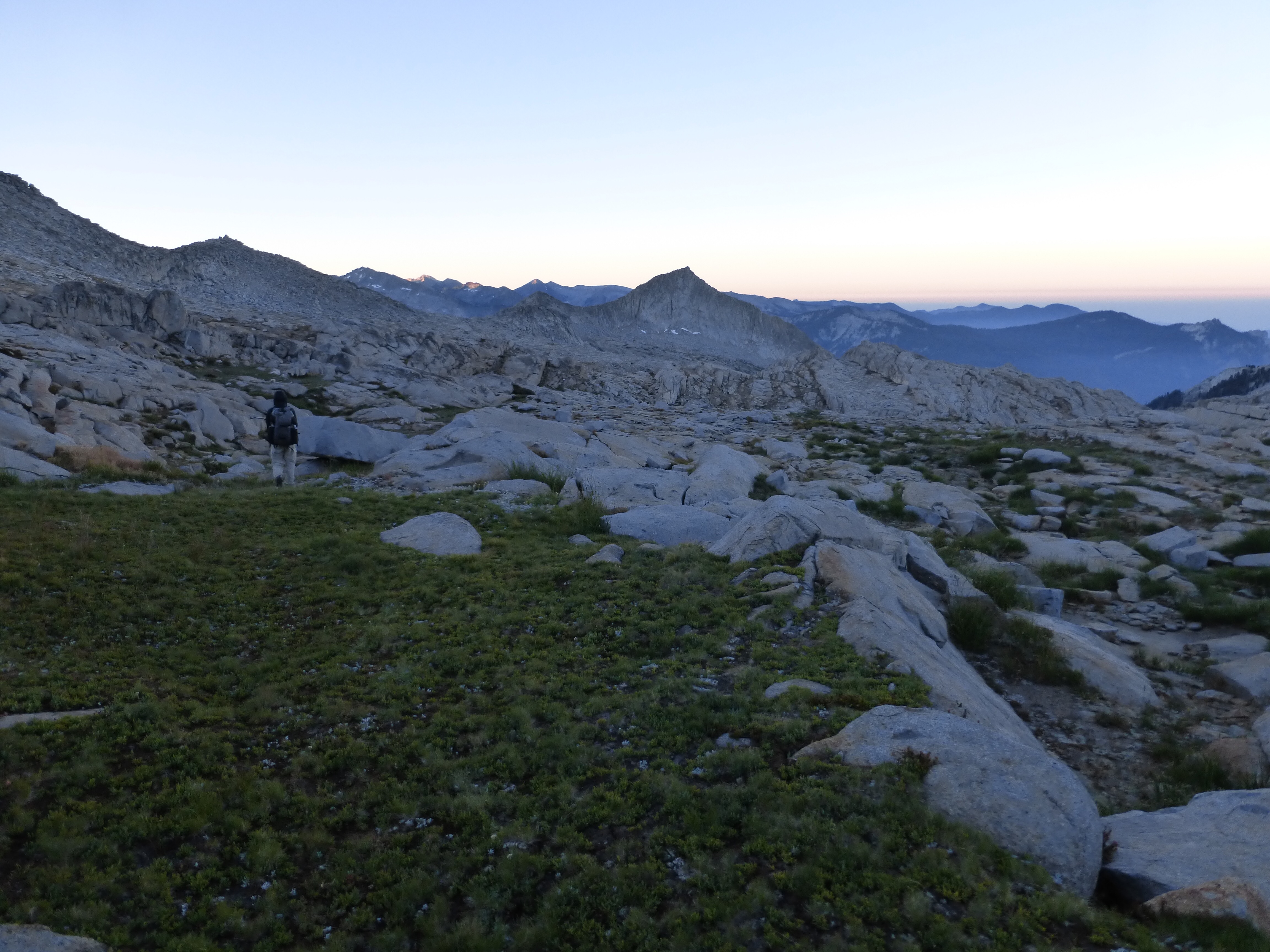 From Pterodactyl Pass, we headed toward Horn Col/Lonely Lake Pass. We stopped for a breakfast break at a tarn just above Lonely Lake. E’s routine is to have a sit down breakfast mid morning. 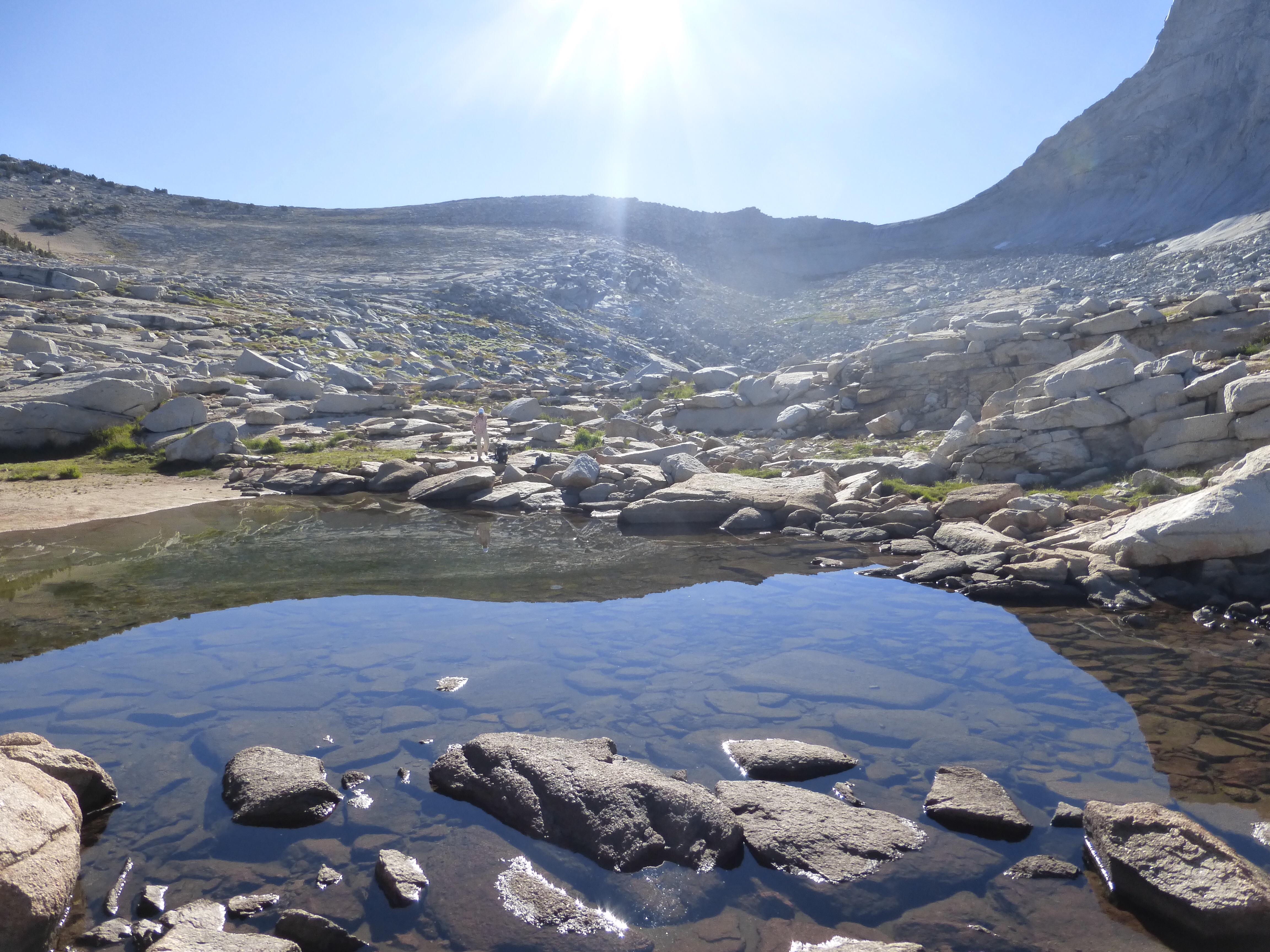 Breakfast at a tarn below Horn Col/Lonely Lake Pass (background).

We did this on the GDT and it worked out as I easily find things to fill that time. Last summer, the mid morning stop actually grew on me. I probably wouldn’t do it on my own hiking solo, but we have different routines and found a good compromise that we do the morning stop and hike a bit later than I normally would, but still stop a bit earlier than E normally does. We tend to do the same mileage, but since I blog, I like to be at camp earlier, whereas E likes to stretch out the day and hike sun up to sun down. We both are compromising our routine to be able to hike together, but it’s well worth the compromise for both of us.

We did go by Lonely Lake on the way to the pass, but it is down low. We could see the lake well as we hiked up the pass and even saw a couple in the distance hiking up from the lake with day packs, so they must have camped there. The hike up to the pass was amazingly smooth with a gradual climb up mostly granite slabs. We really enjoyed it. The final stretch to get up to the top requires a traverse over a bench just below the pass. It was a fun one we both really liked. 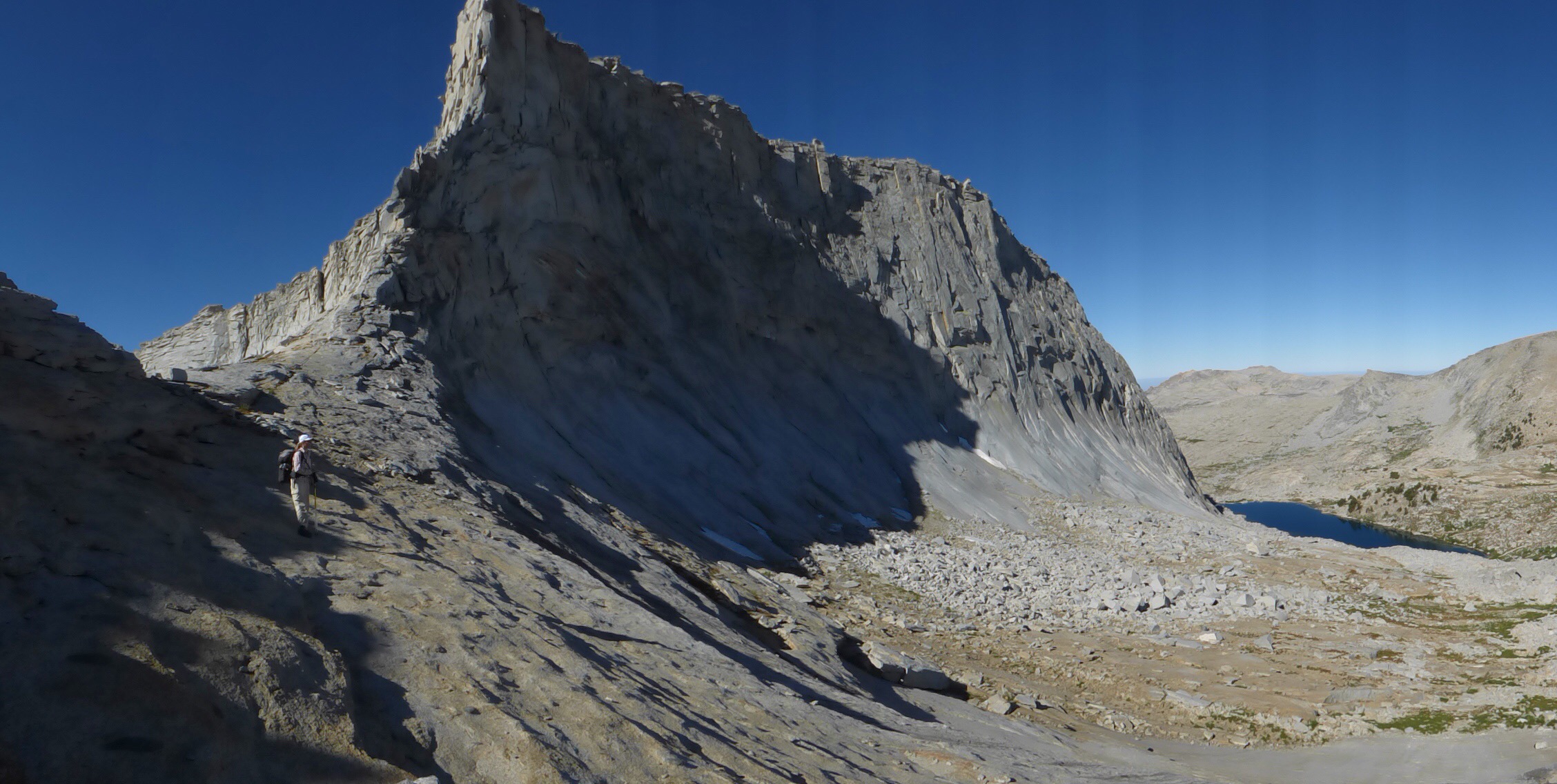 When we got up over Lonely Lake Pass, we were hit with a great surprise…more slabs! 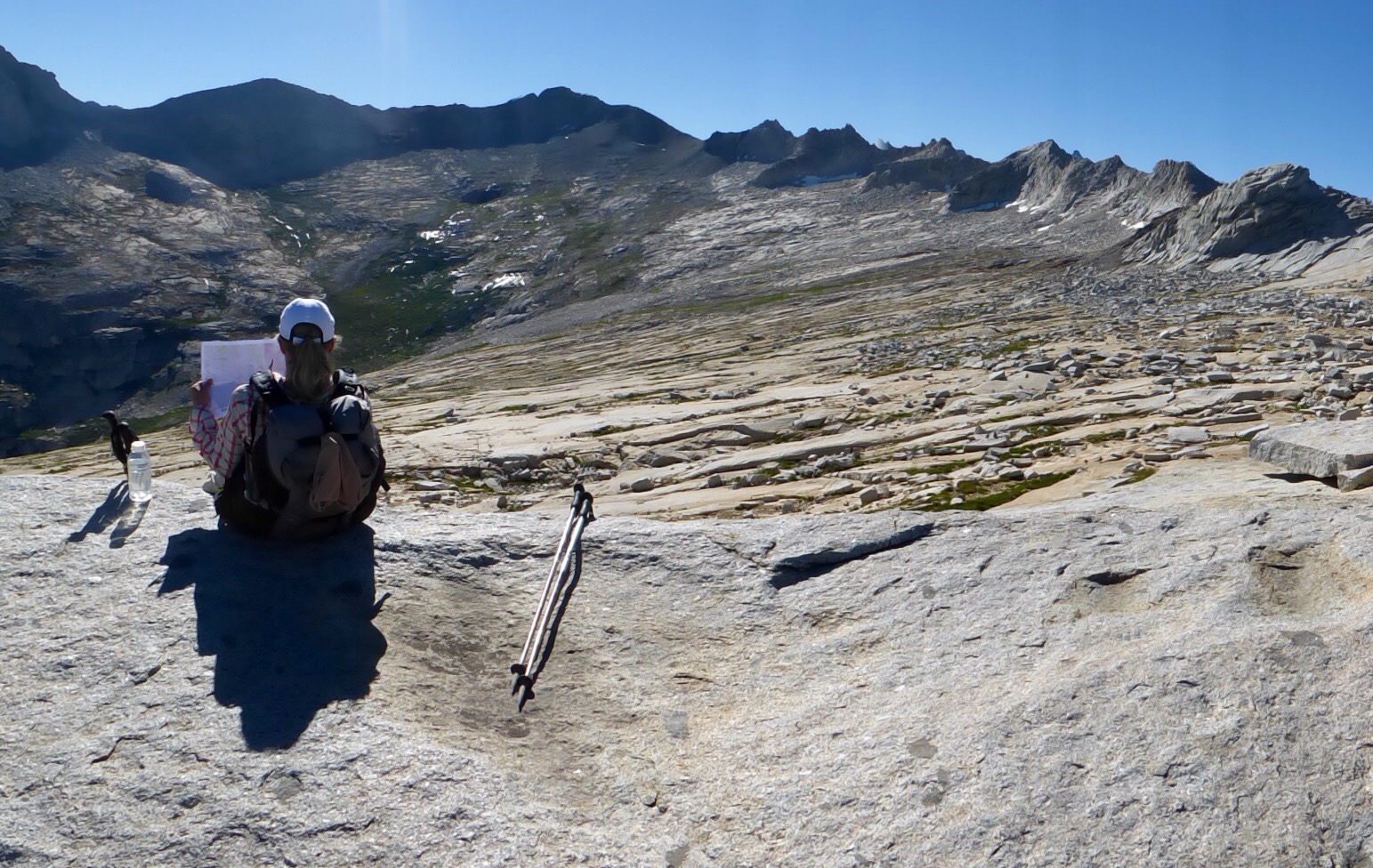 E checking the map to make sure this miracle of smooth terrain is really true.

Far across the bowl was our next pass, Copper Mine Pass (12,320ft). Our task was to walk the great slabs across and then head up a gravely area where there was an old copper mine and a faint use path. The path took us up to the ridge and we were feeling the elevation. 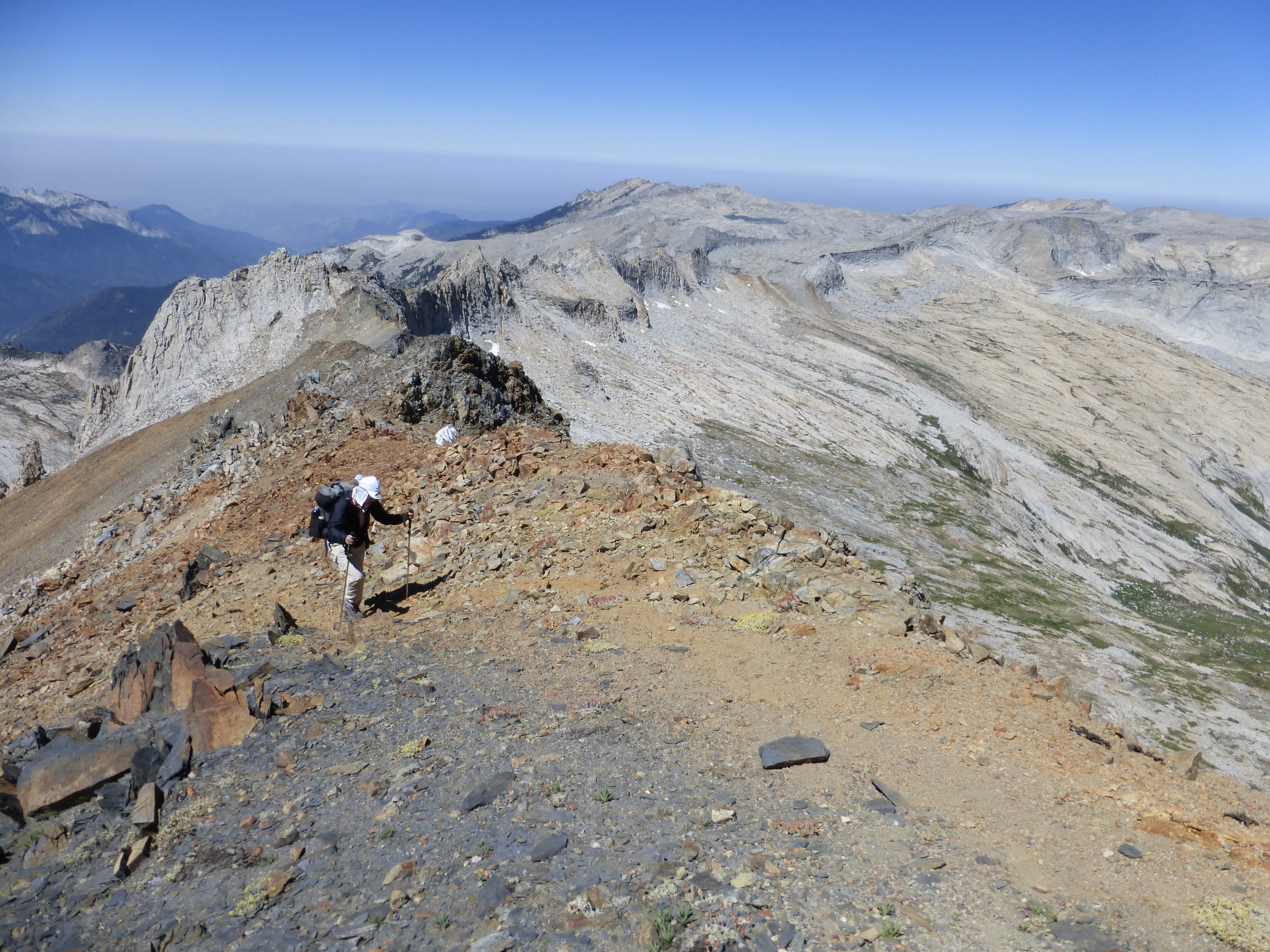 Ridge walk up to Copper Mine Pass.

We couldn’t remember how high the pass was and were discussing it on the way up. I said that my body felt like it was at 12,000ft. When we got to the ridge we thought we had completed the pass and looked up on the map that it was over 12,300ft. I said that it was weird because it only felt like I was at 12,000ft with how my body was feeling. Then we looked more closely at the instructions. We needed to walk up the ridge a couple hundred feet higher before reaching the true pass. Pretty incredible that my body was that in tune with the elevation. It was only E’s second day and she was kicking butt that high. I was a mess for like a week acclimating and she’s killin’ it!

We made it around a ridge to a whole new canyon that we’d be dropping down, Cloud Canyon. It was cool to see the change in color of the rock. The descent had some talus and small rocks, but wasn’t bad with a faint use trail in and out to follow by cairns. 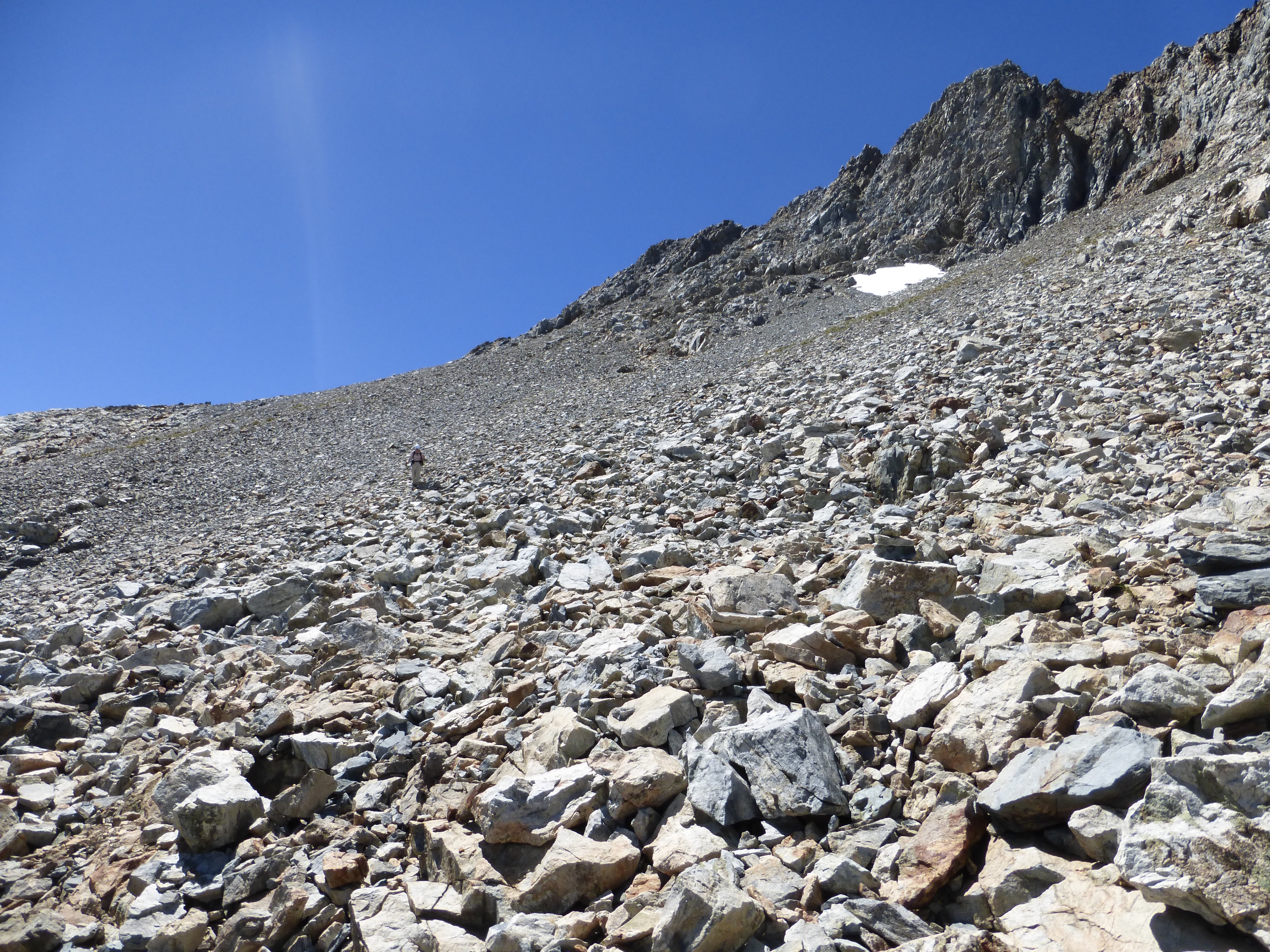 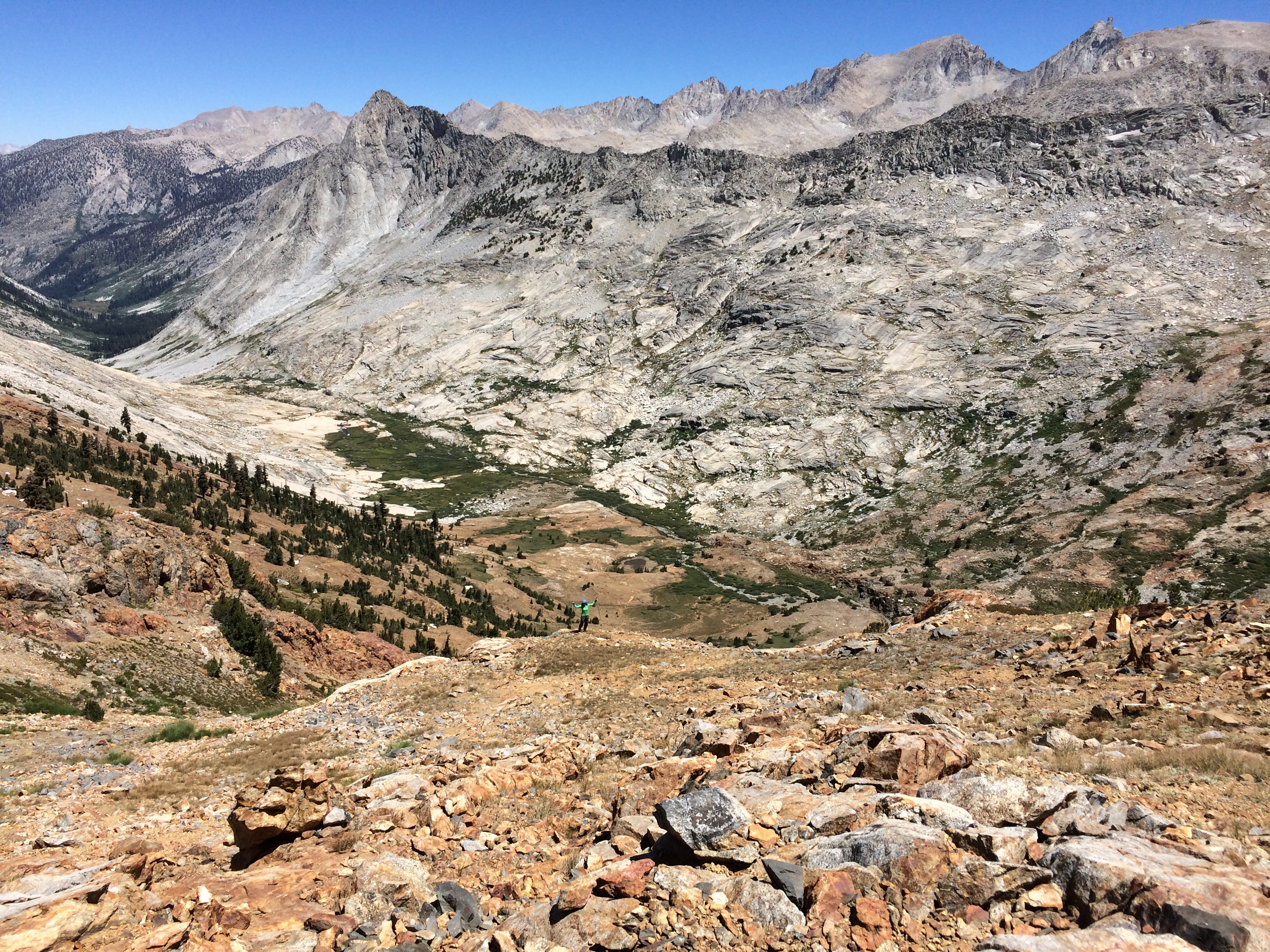 Looking down into Cloud Canyon. See me in the center?

Once down in Cloud Canyon, we had some nice walking while easily dodging marsh and some willow patches. We are really enjoying how this route has thus far given a great balance of challenging climbs and terrain we can stretch our legs on. 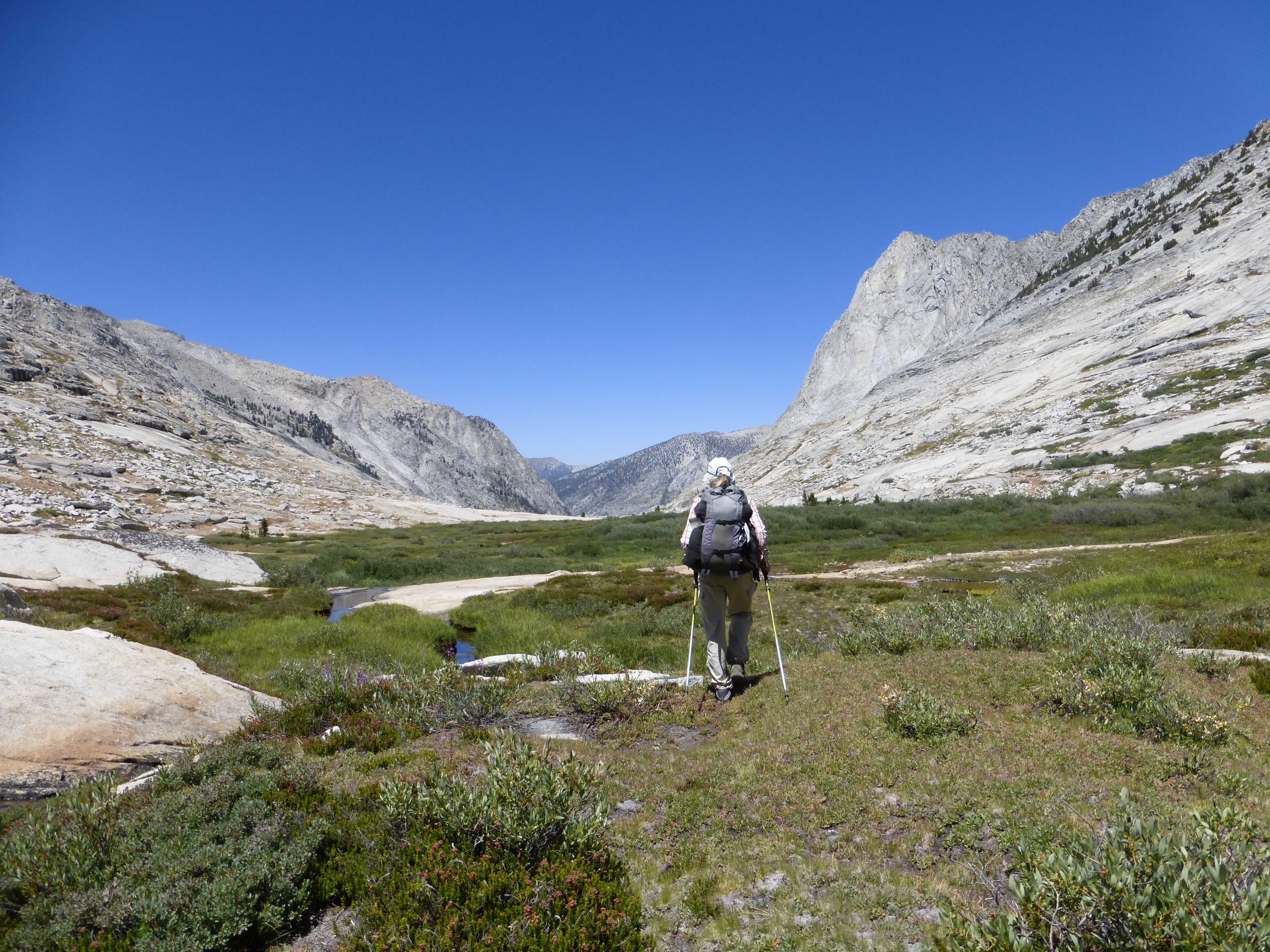 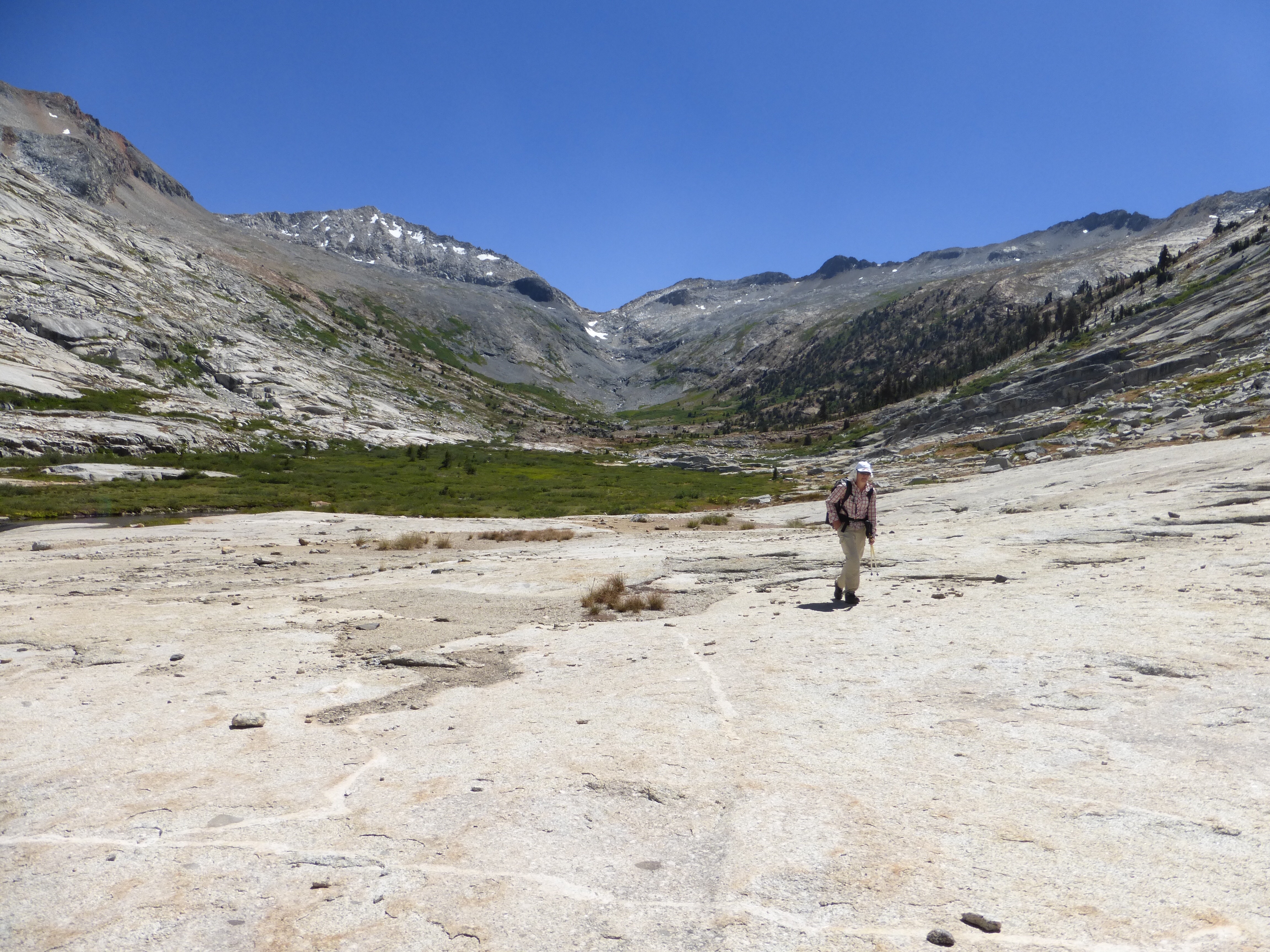 Looking back at Copper Mine Pass (middle right dip).

As we dropped to the bottom of the canyon, it got more wooded and brushy. There was a faint use trail we picked up here and there until we hit a horse camp. From there, we connected to Colby Pass Trail. It was late afternoon and man it was quite a climb in the heat. It was mid 80s and we went up over 1400ft in 2.2mi. It was one of those classic Sierra trails amazingly constructed as it switchbacked up the canyon and into rock. 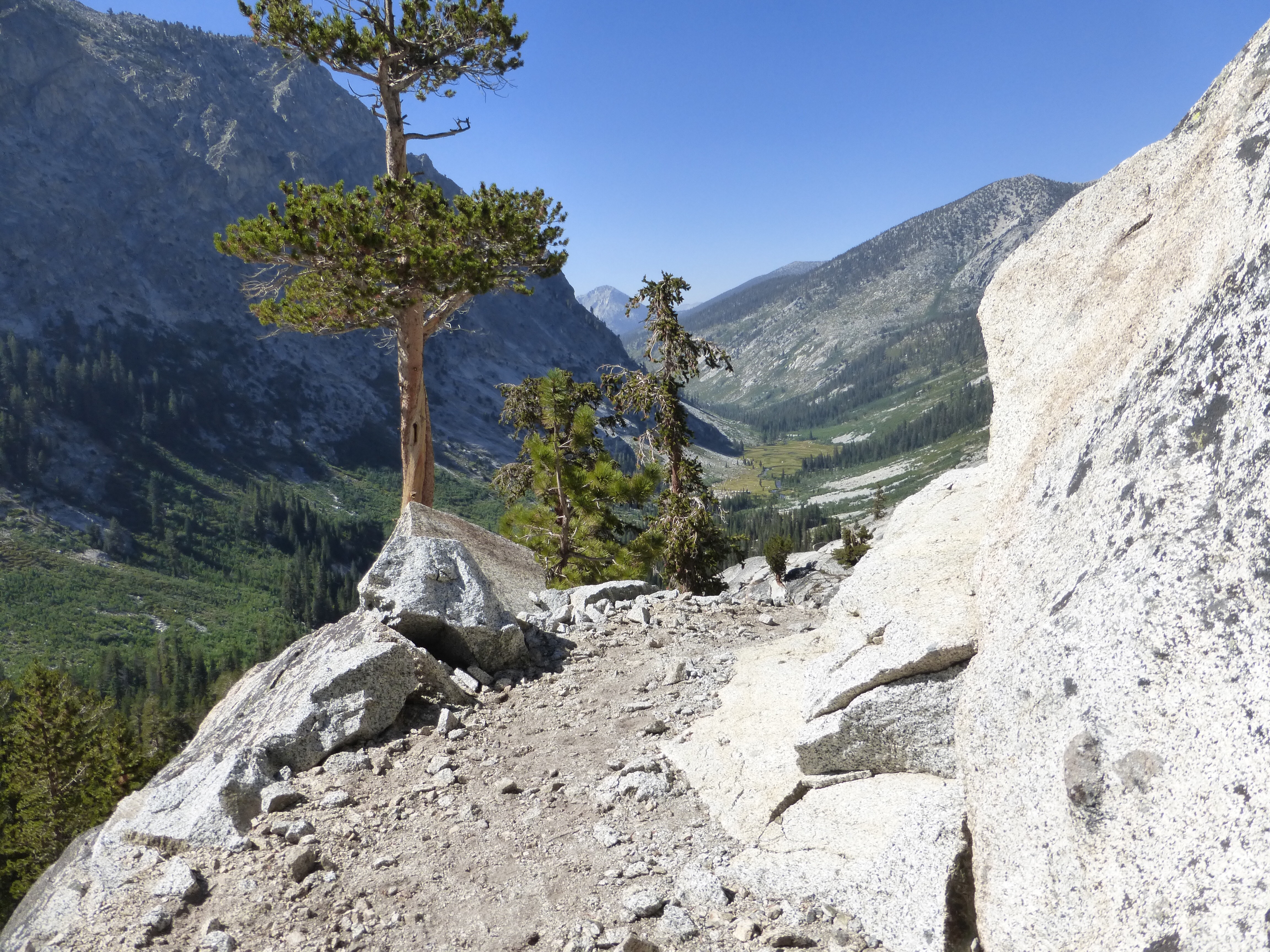 On the way up, our map noted a nice swimming hole we’d pass. That’s where we met the only other couple we spoke to today. It was funny because the man was fully naked expecting to see no one else. He nicely spoke to us as his wife handed him a washcloth as a loin cloth.

We were pretty tired when we reached Colby Lake, our first goal for ending for the day. It was around dinner, but we decided to hike on up a bit further to get even more of the climb under our belts. We each ate a bar to hold us off and we hiked up along Talus Creek. There we found spots to eat and camp around 7pm. 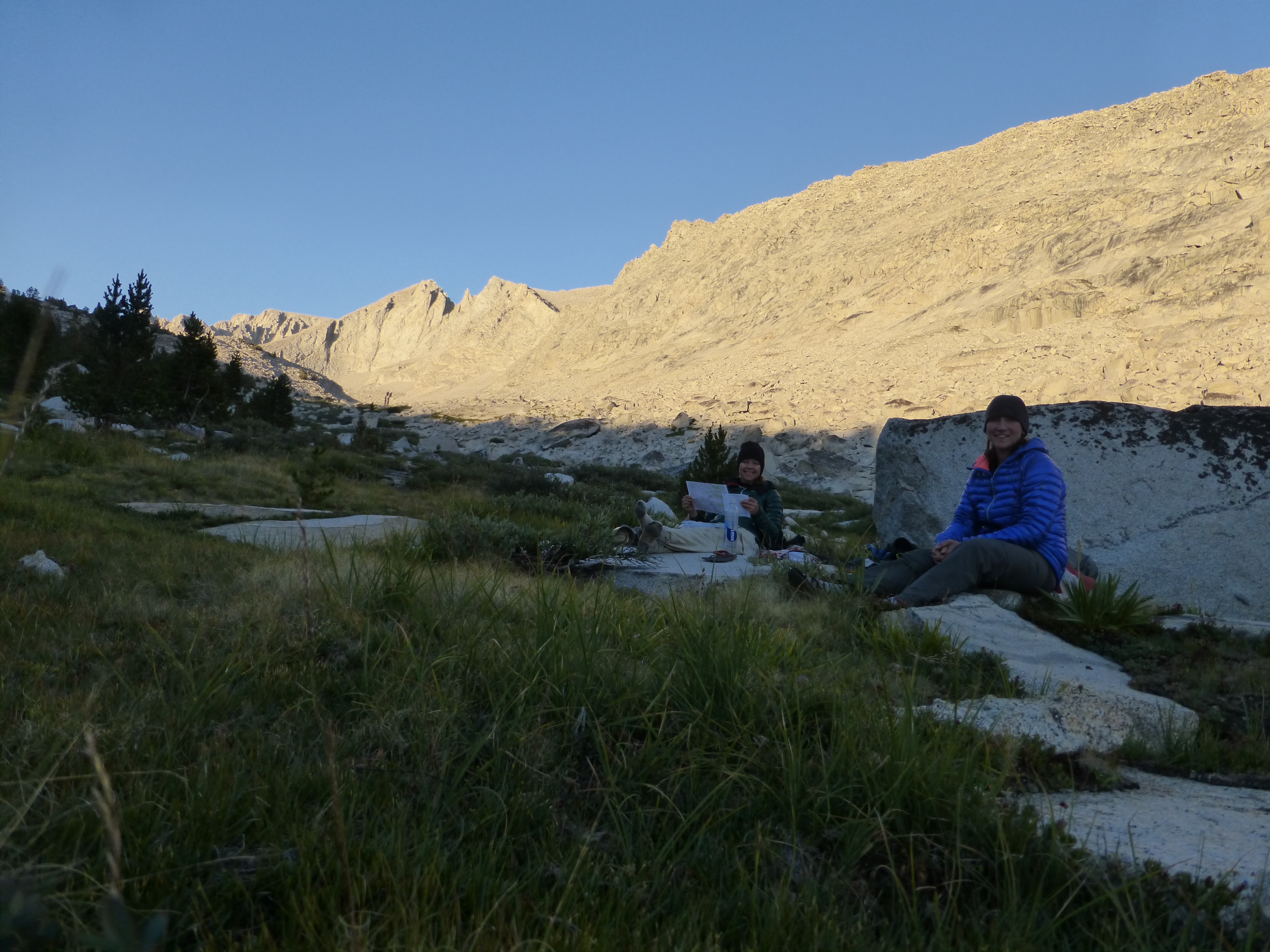 Temps dropped quick. It has been getting dark noticeably earlier. We set up our tents as it was getting dark and crashed. Man, what a complete day! We did three passes (just a mile from another) today and 12mi, which is a ton on these cross country routes. The elevations aren’t clearly noted on our sheets, but it was quite a bit. We’re tired, but it’s the best kind of tired. When you know you’ve worked hard and the payoff is well worth the efforts. 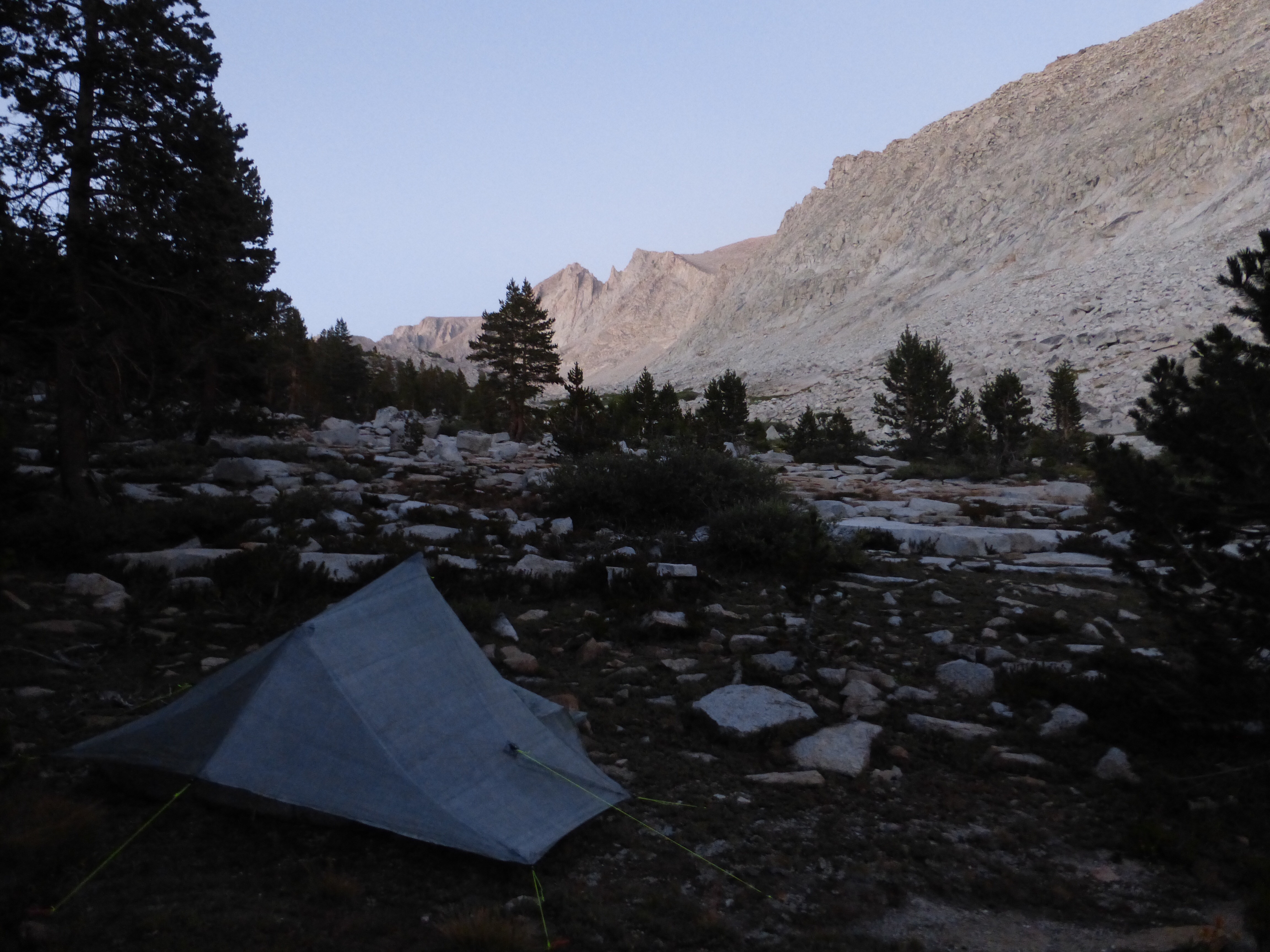 Camping along Talus Creek (E’s spot is tucked out of sight in the trees).