It was a brisk start to the day at 6am as we headed up to our next landmark, Chimney Rock. The guidebook didn’t describe which of the many chimney-esque rock formations were the actual Chimney Rock, so we just aimed for something and adjusted as we went. Our goal is still to mainly use map & compass, and we don’t need to be spoon fed, but a description would have helped. 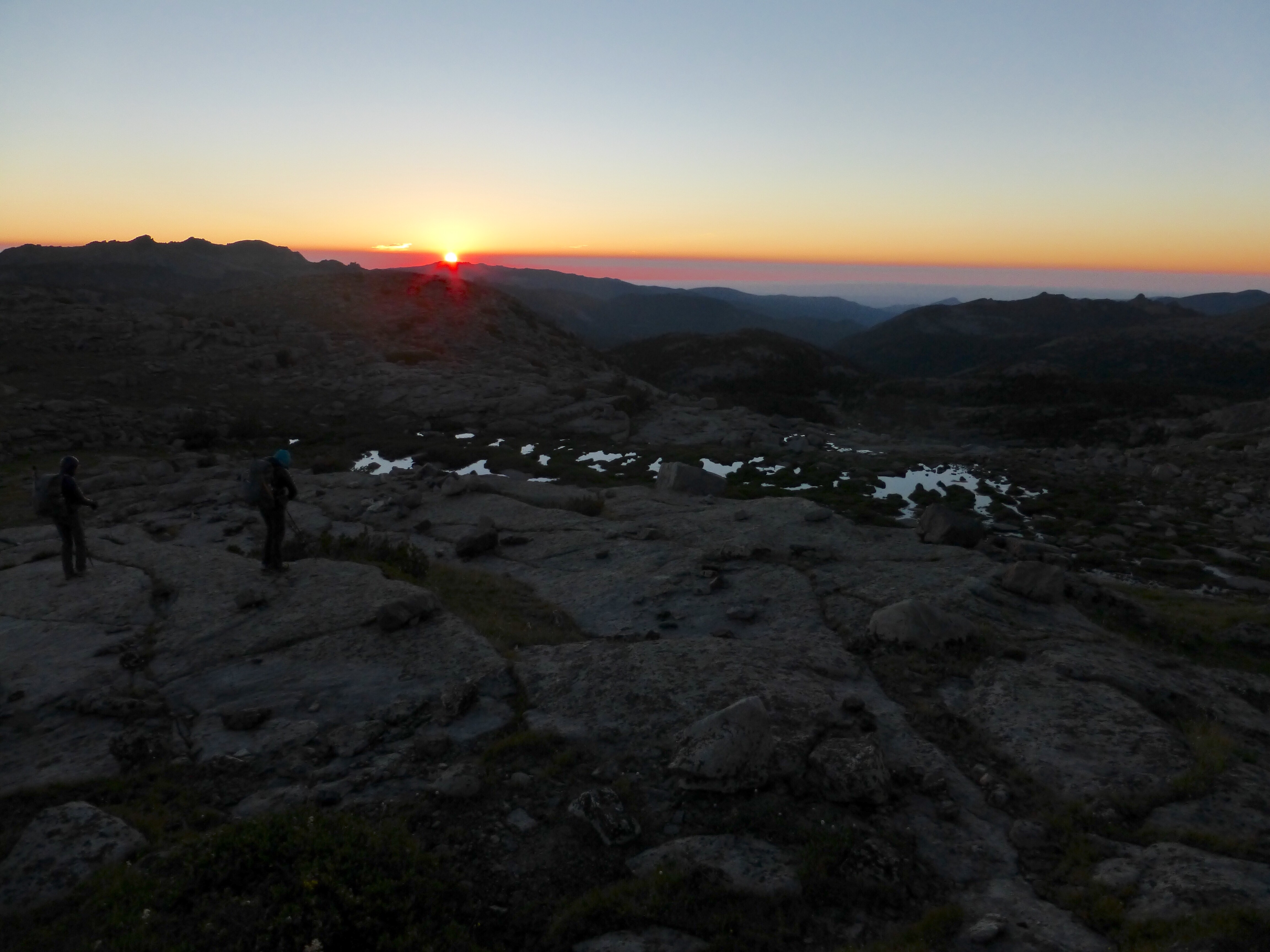 Sunrise with smoke from a nearby fire. 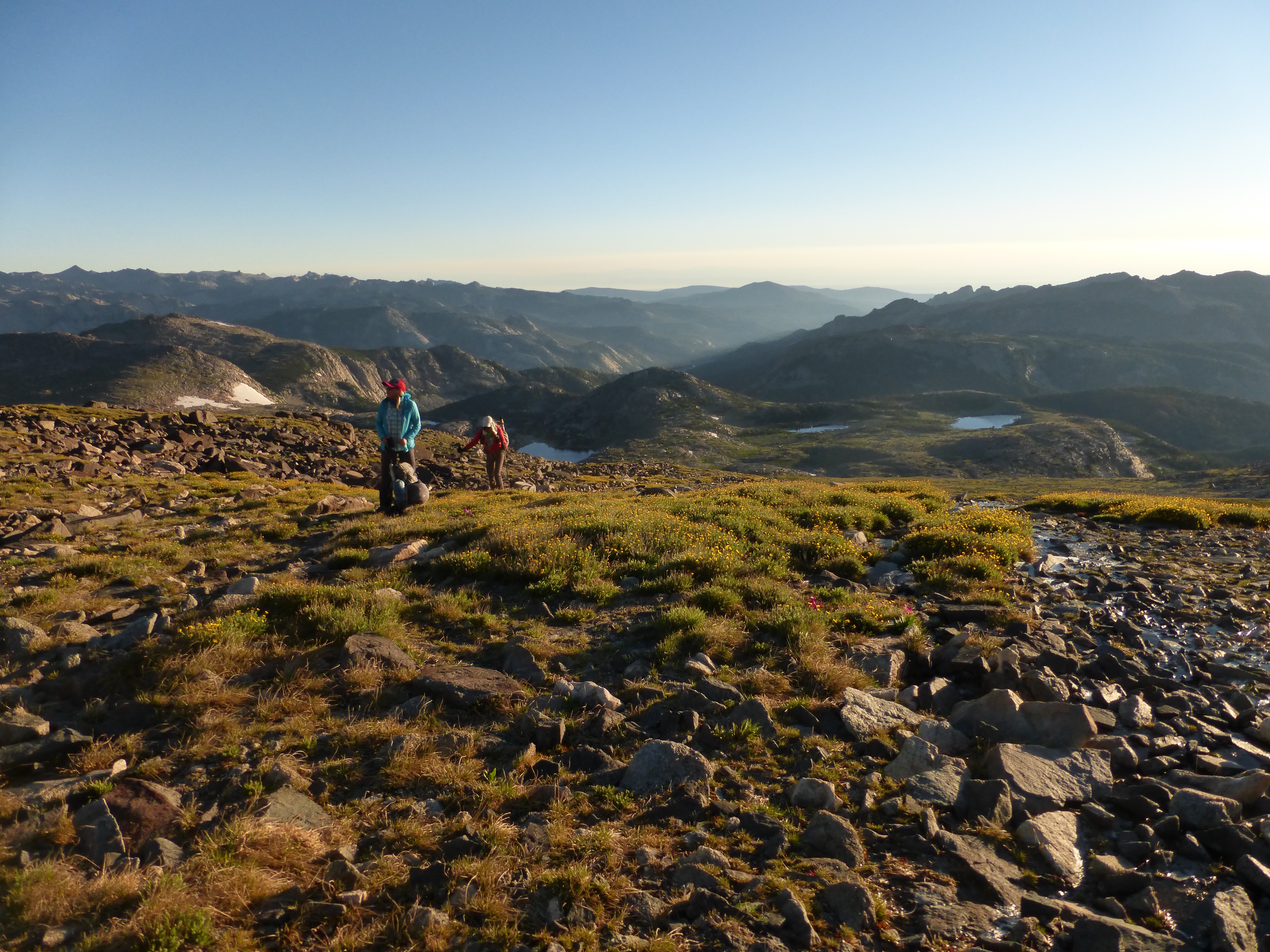 We ended up hiking to a different landmark, and realized it once we got more of a view. We caved and checked the GPS because our paper maps also had quite a gap between waypoints and something seemed to be awry. Wouldn’t you know it, we turned on the GPS to see a waypoint that Skurka had put on the GPX file, but not on the map. For those of us attempting to solely use map and compass, it’s frustrating that the maps do not have all the beta on them. Many waypoints are even labeled differently on the map than on the GPX file or data sheet. So, it will have one description on one resource and another description for the same point on another. Now that we know, we are being more aware to cross check all the resources…which is tons of fun when trying to navigate something new. 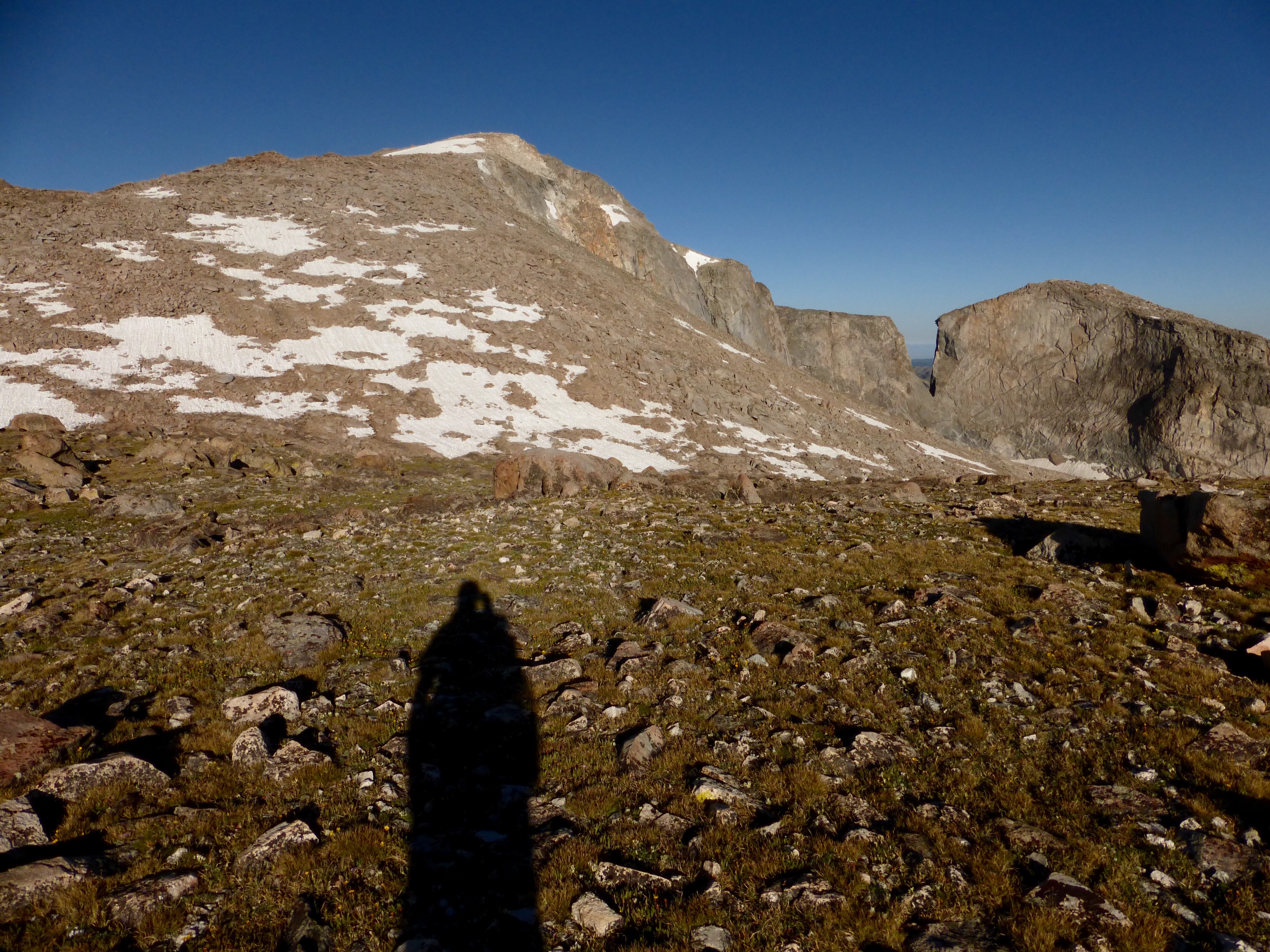 The final summit of Wind River Peak comes into view. 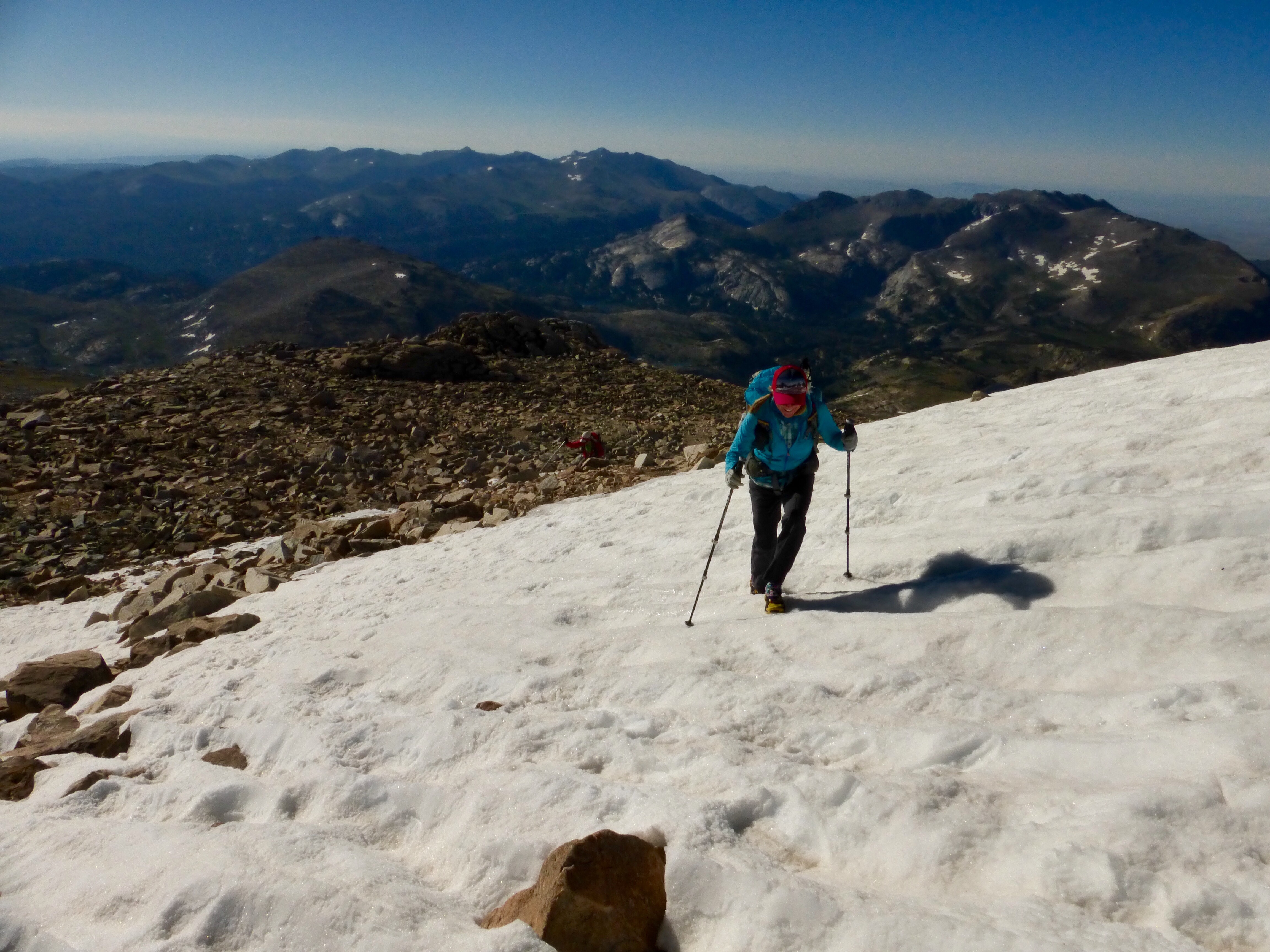 Rockin’ on a stretch of snow near the top.

We headed up Wind River Peak. The final mile or so, was a combination of various sized boulders, rocks, and some stretches of snow. It went smoothly, but temps were in the low 40s and it was really windy. Yes, we were cold and got down quick. 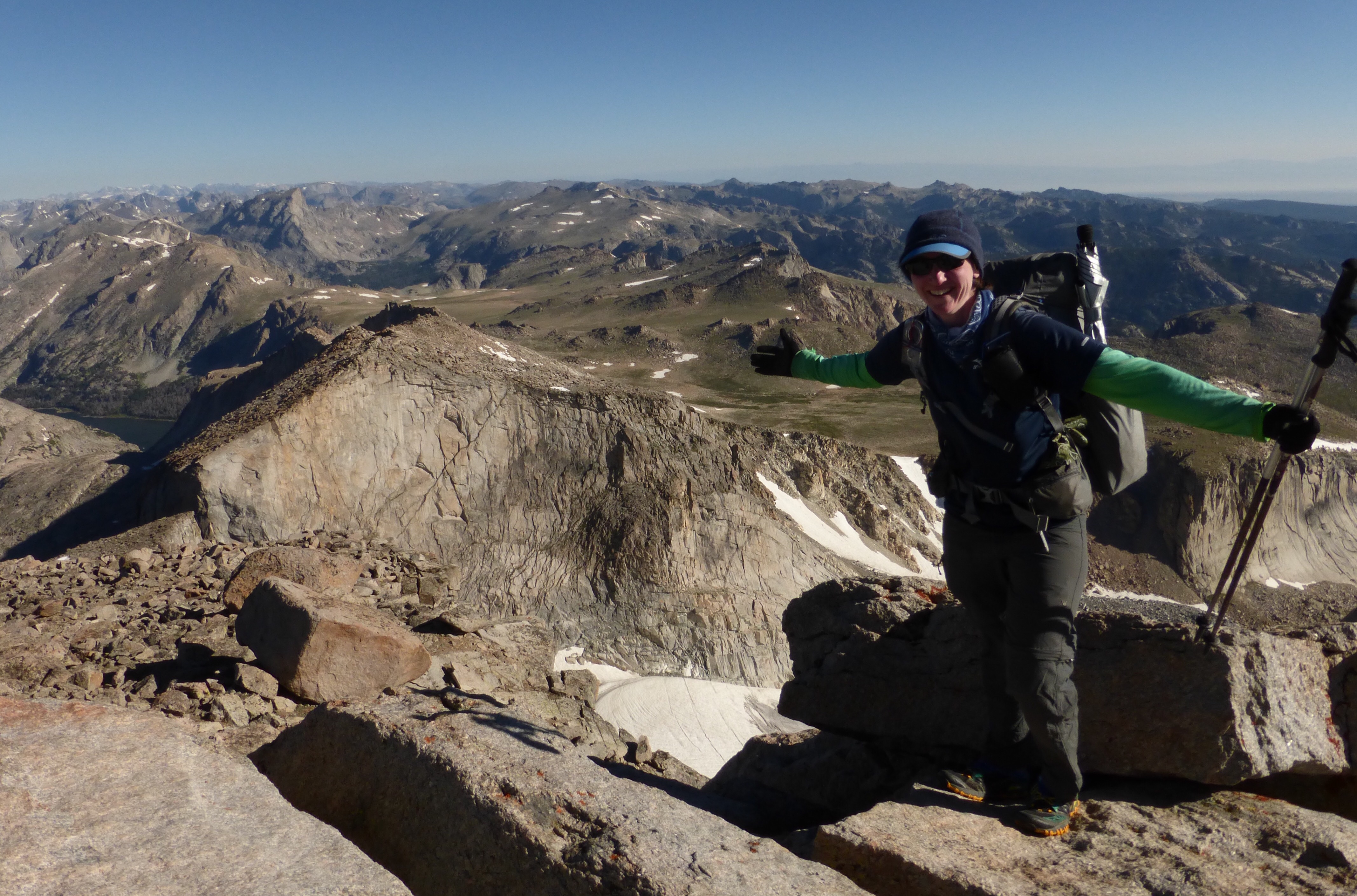 I checked for service at the top while I was waiting for Rockin’ and Why Not to come up, and didn’t have any. Then, when they made it up, they checked and had service. I realized I had my data turned off on my phone, so it appeared to have no service, ugh! My opportunity to post yesterday’s entry was past, dang!


There are many ways down Wind River Peak. Skurka has his route going down a sketchy west gully that is very tedious and time consuming. Having just done the Sierra High Route, we are accustomed to talus and hiking on various rocky terrains. The ones on the SHR are there for a reason to take you to something great or setup something cool. We knew there were safer and more efficient options to go down Wind River Peak. 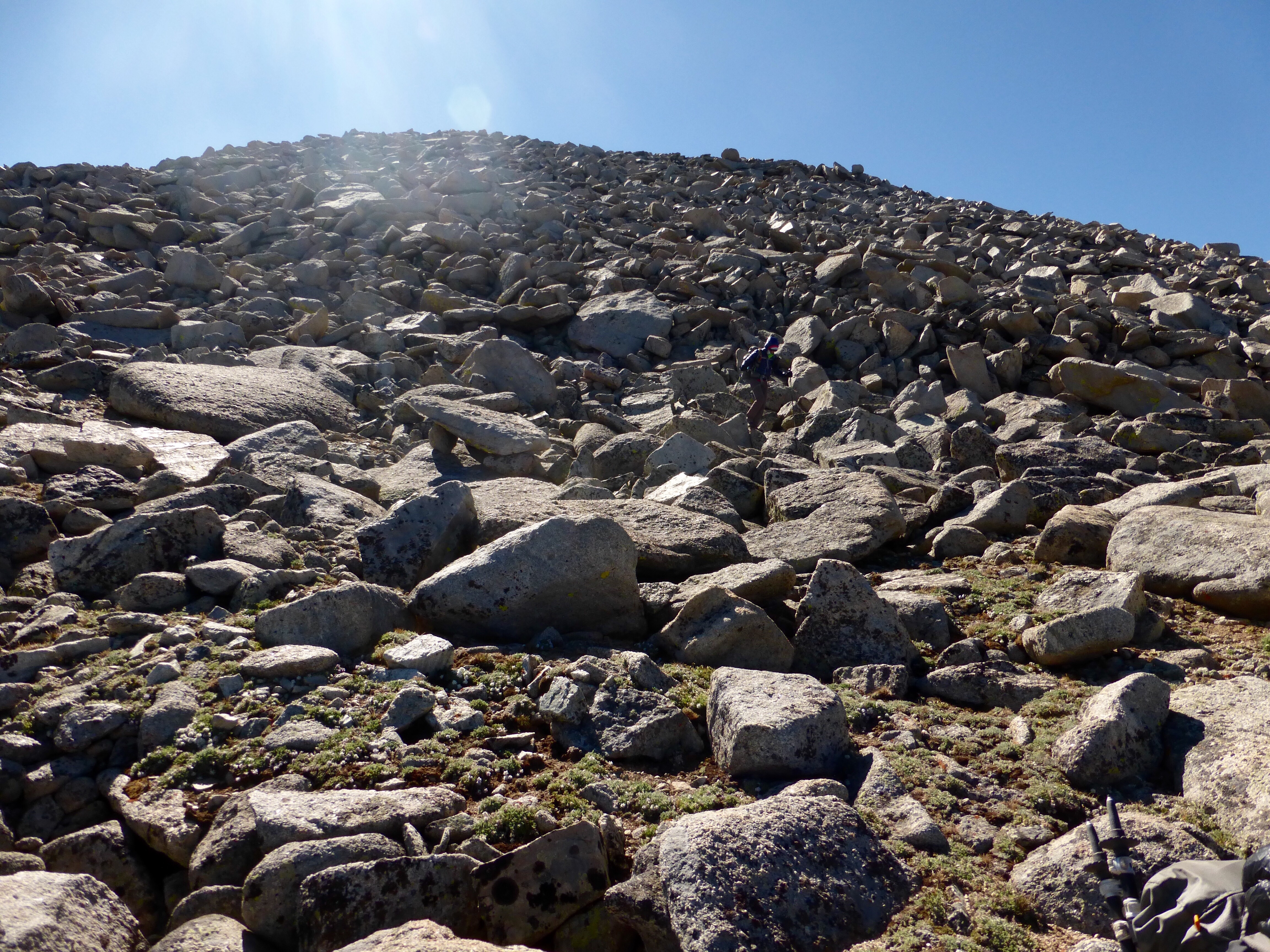 Why Not heading down the initially tame descent.

In our research, every local person who knew the area, saw no reason to take the sketchy West Gully route. We decided to do it anyway, figuring it would pay off in the end and Skurka must have some reason for it. 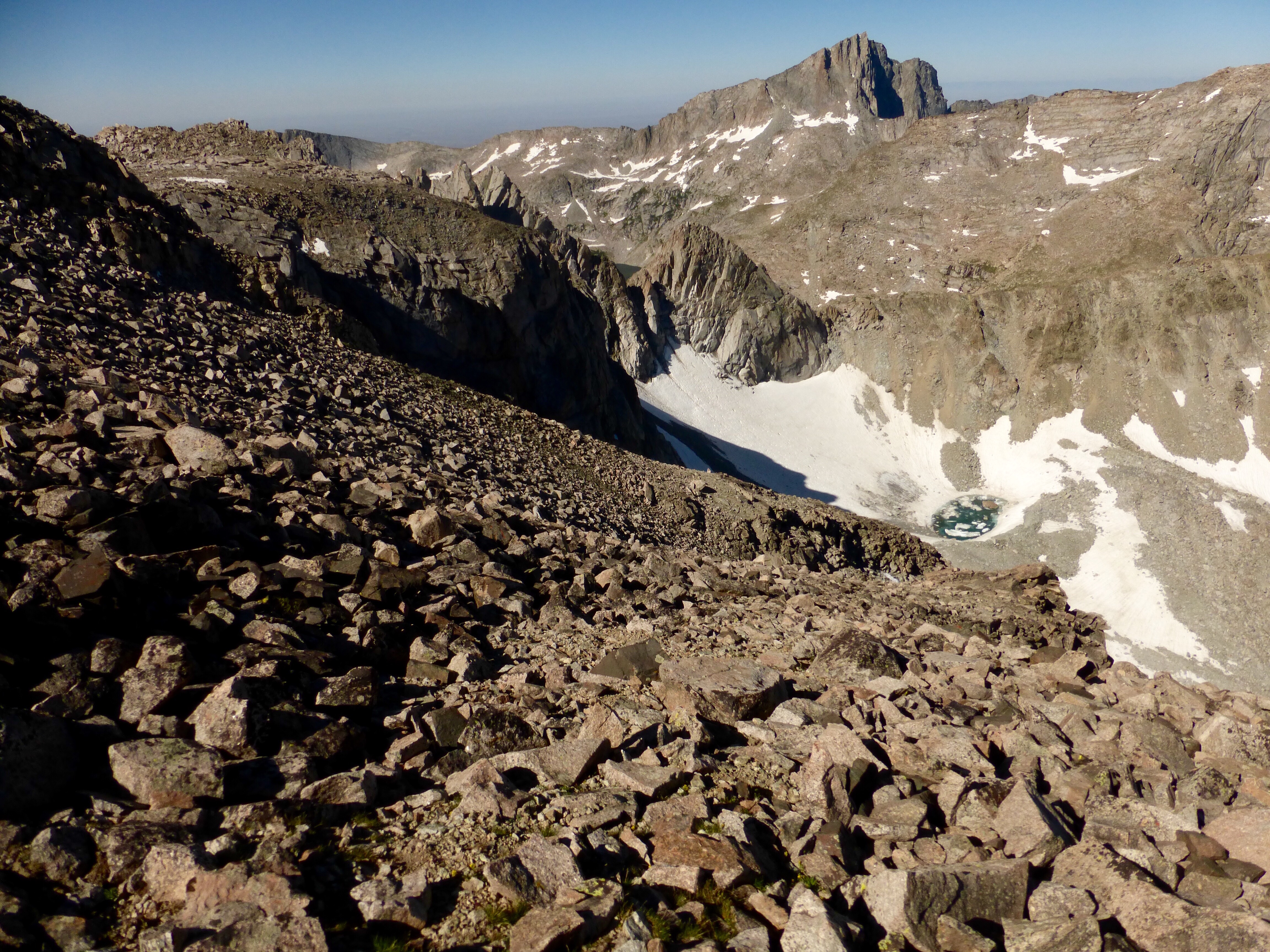 Heading down the West Gully…

We spent four hours on the descent down to the unnamed lake below the peak. Four hours of carefully stepping from one unstable, sharp, and shifting rock to another. I’d say that if you enjoy this kind of travel and/or have good knees for extended downhill, it could be more like 3hrs for that descent. We all felt fine with the exposure in comparison to all we’ve done in the last month, but it wasn’t a safe place to be. 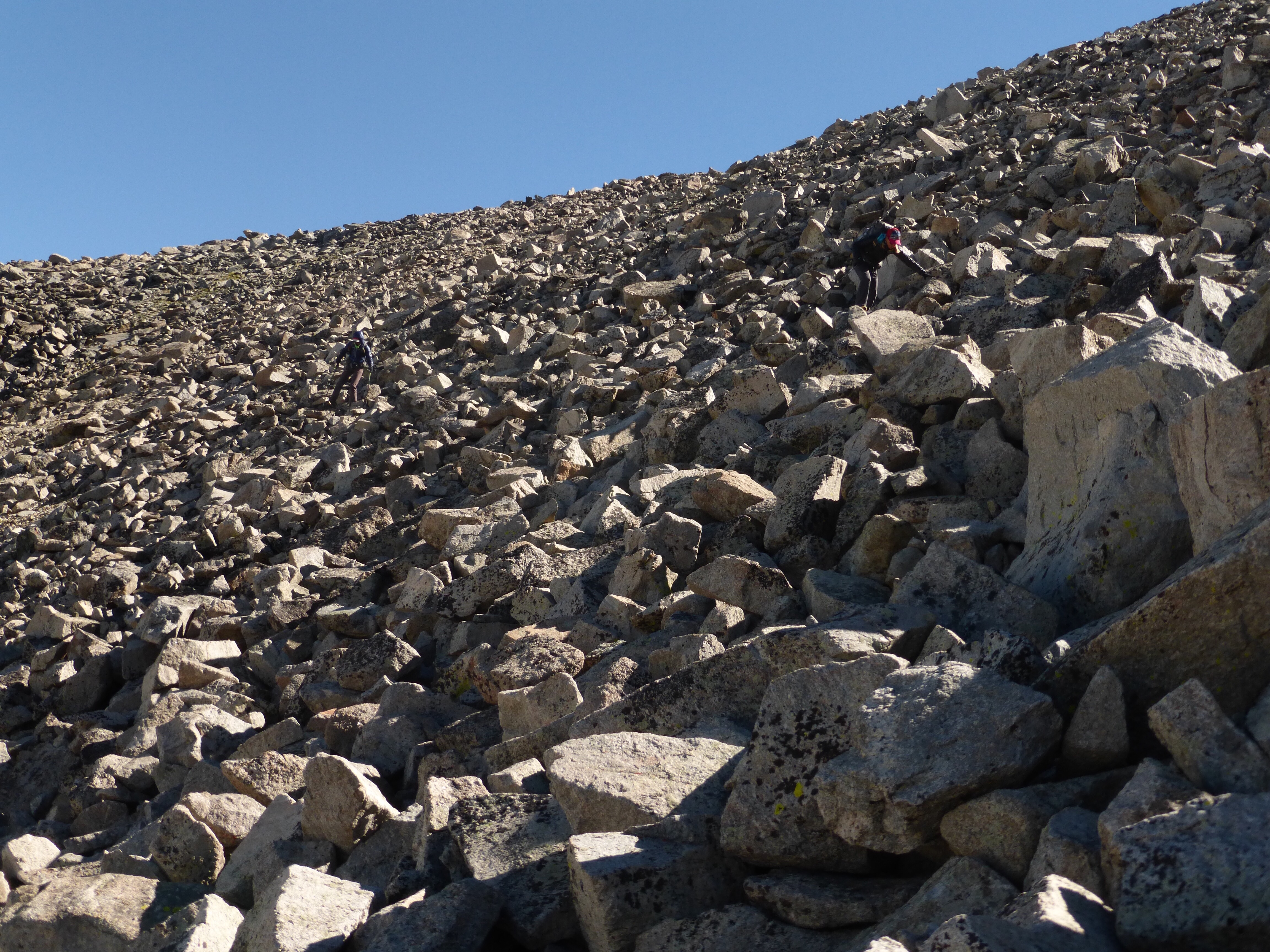 Why Not and Rockin’ working their way down.

The whole thing is quite unstable and when you’re in a group, it’s challenging to stay out of each other’s fall lines. All I can say is that it’s like a rock version of Jenga. At any moment, the whole thing could come tumbling down. I had plenty roll and shift and even fall on my own feet. All I could think was if that one rock was going to set off the chain reaction of all the others above or below me. 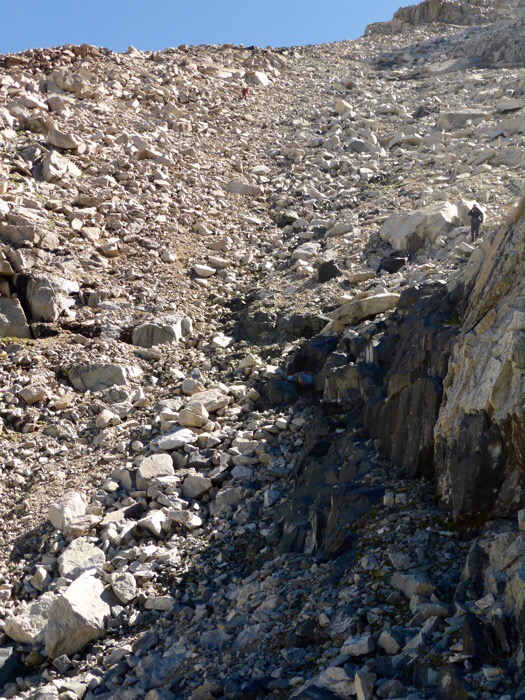 Why Not (top middle) and Rockin’ (right) attempting to spread out.

There was possibly some class 3 stuff on the final part of the descent, but we had snow in the final chute that may have been covering it. We had our microspikes, and it was too steep and mushy to safely walk down, so we did a great combination of butt scooting and having our feet half on snow and half on rock with some handholds where possibly. Yes, it’s quite fancy and looks as cool as it sounds. 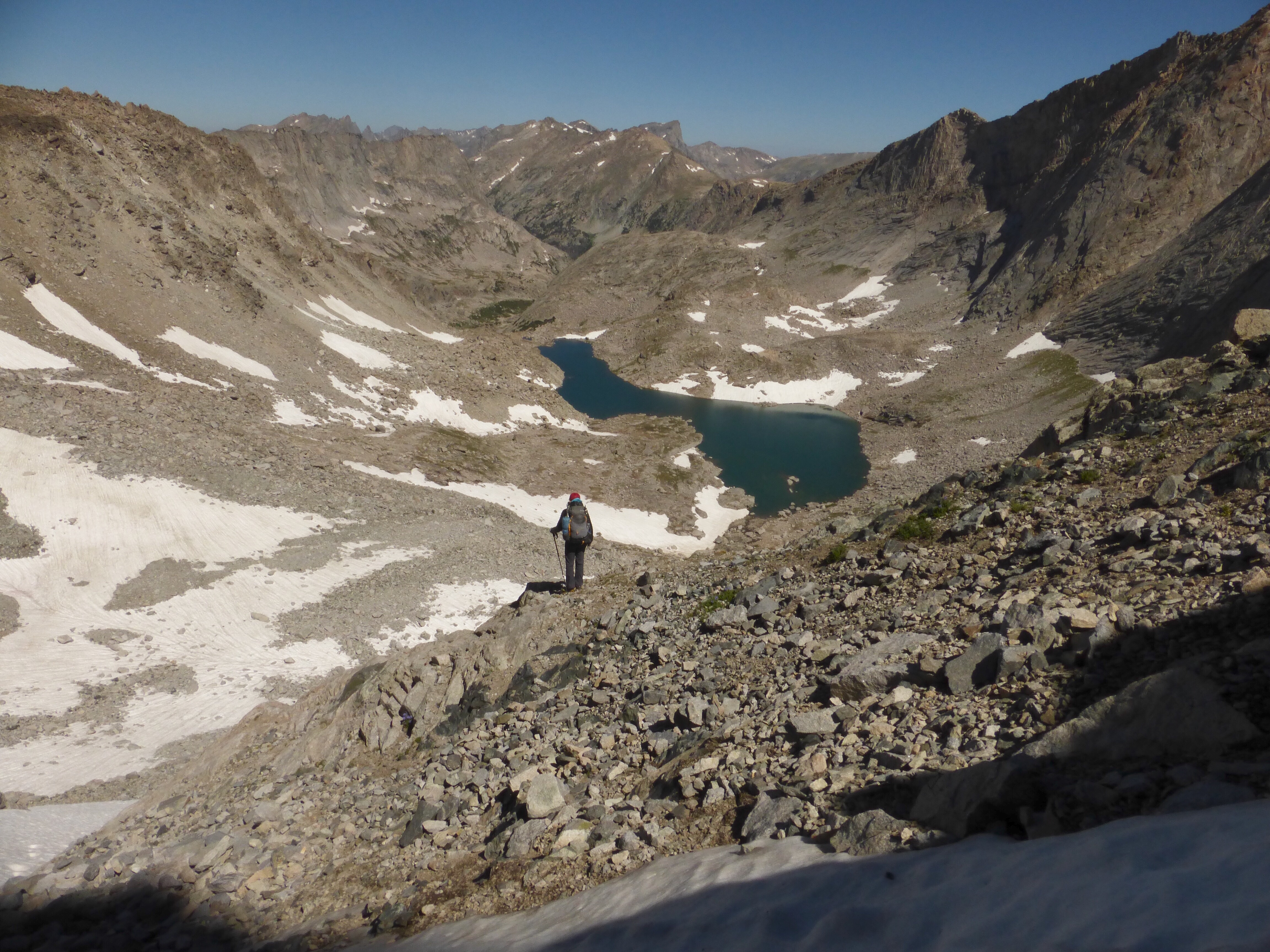 We saw our destination for hours. 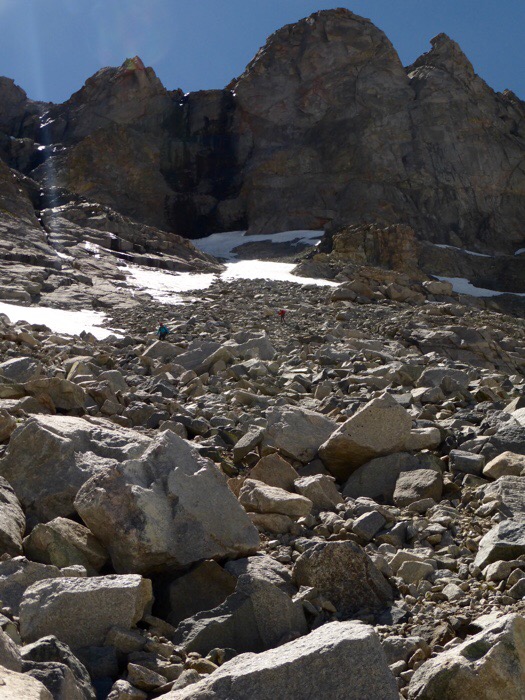 Mellowing out towards the bottom.

So we finally made it down to the lake and had lunch. From there, the hiking got much easier as we followed a steam to Black Joe Lake and there were use trails in and out. We got to walk for a bit through a nice meadow area. The wildflowers are really coming out and that’s been great to see. 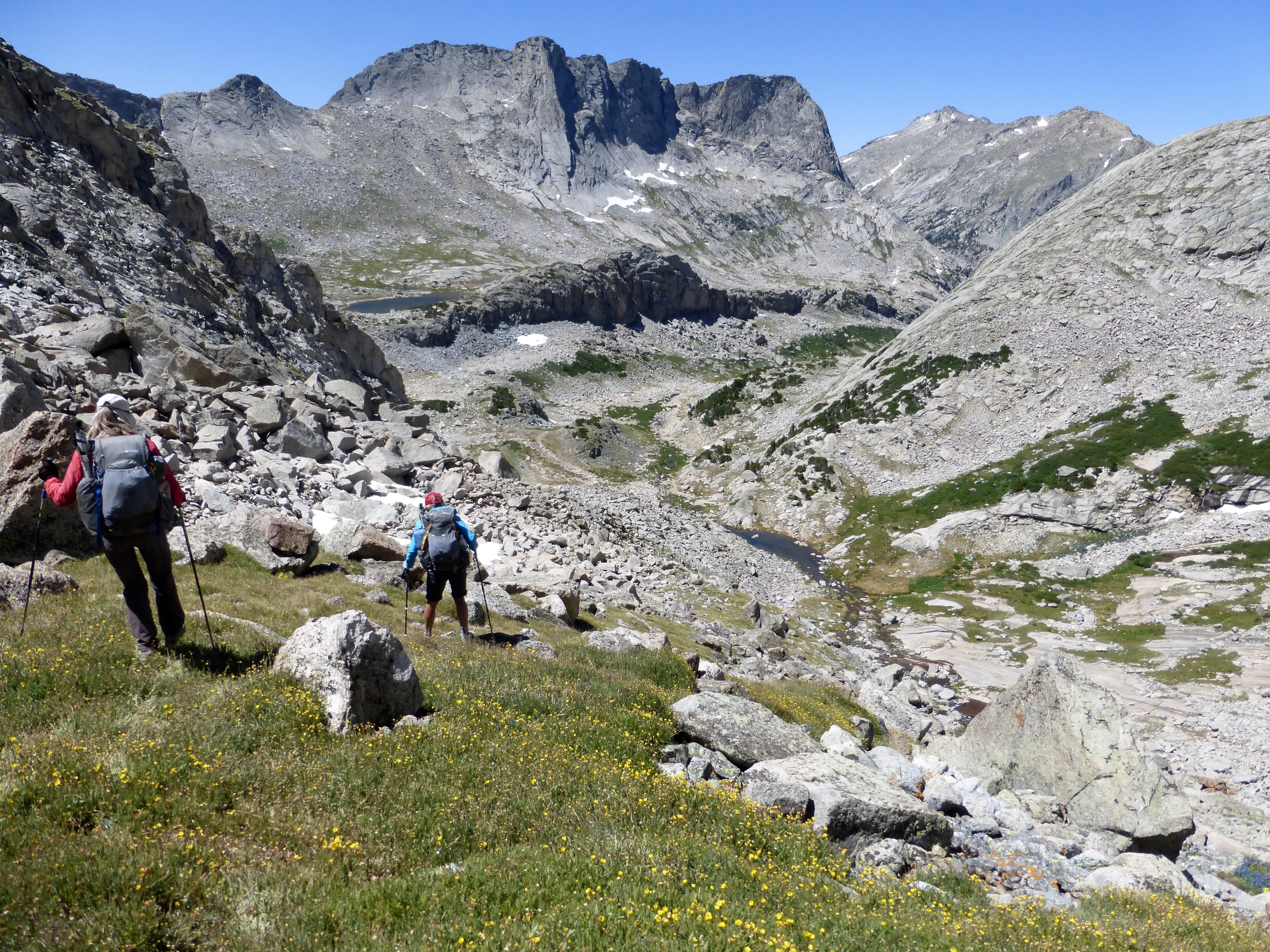 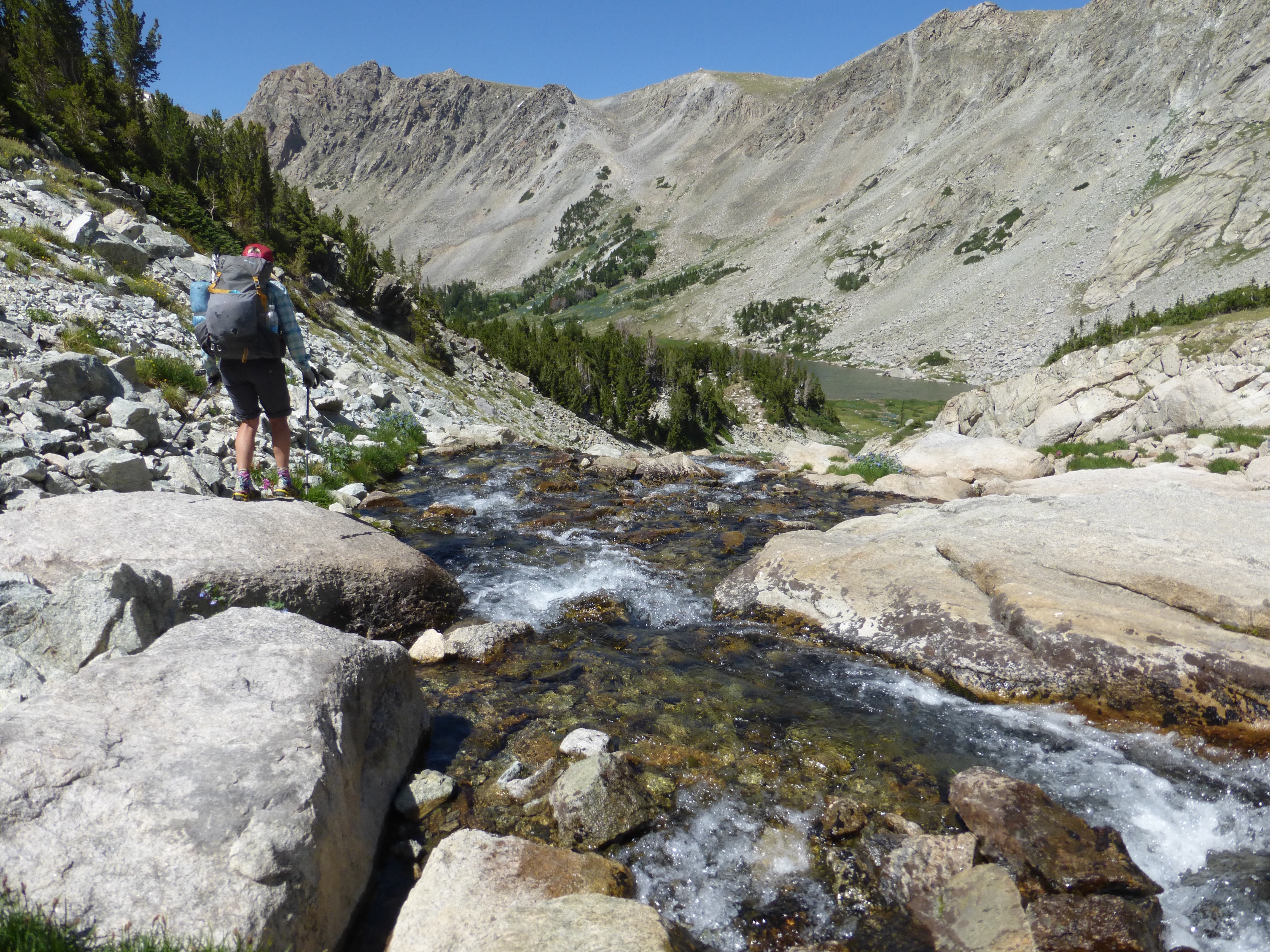 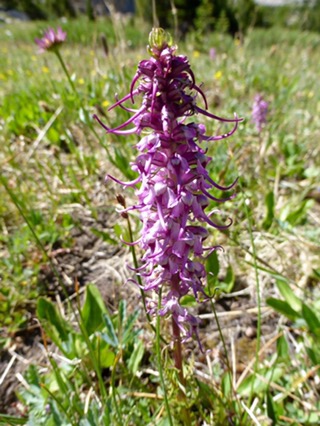 We took a break along Black Joe Lake and considered that we may make it further than we anticipated. We looked at our maps, but none of us had the next page out because we didn’t think we’d need it today. I had it in a spot I could get to quickly and added that page to my quart Ziploc that I keep in my pack’s side pocket with the maps and data sheets for that day. Well, guess what happened when we left that break…yep, I left it there somehow! Ugh, once again, I lost something on the trail. It was two days of maps and beta. 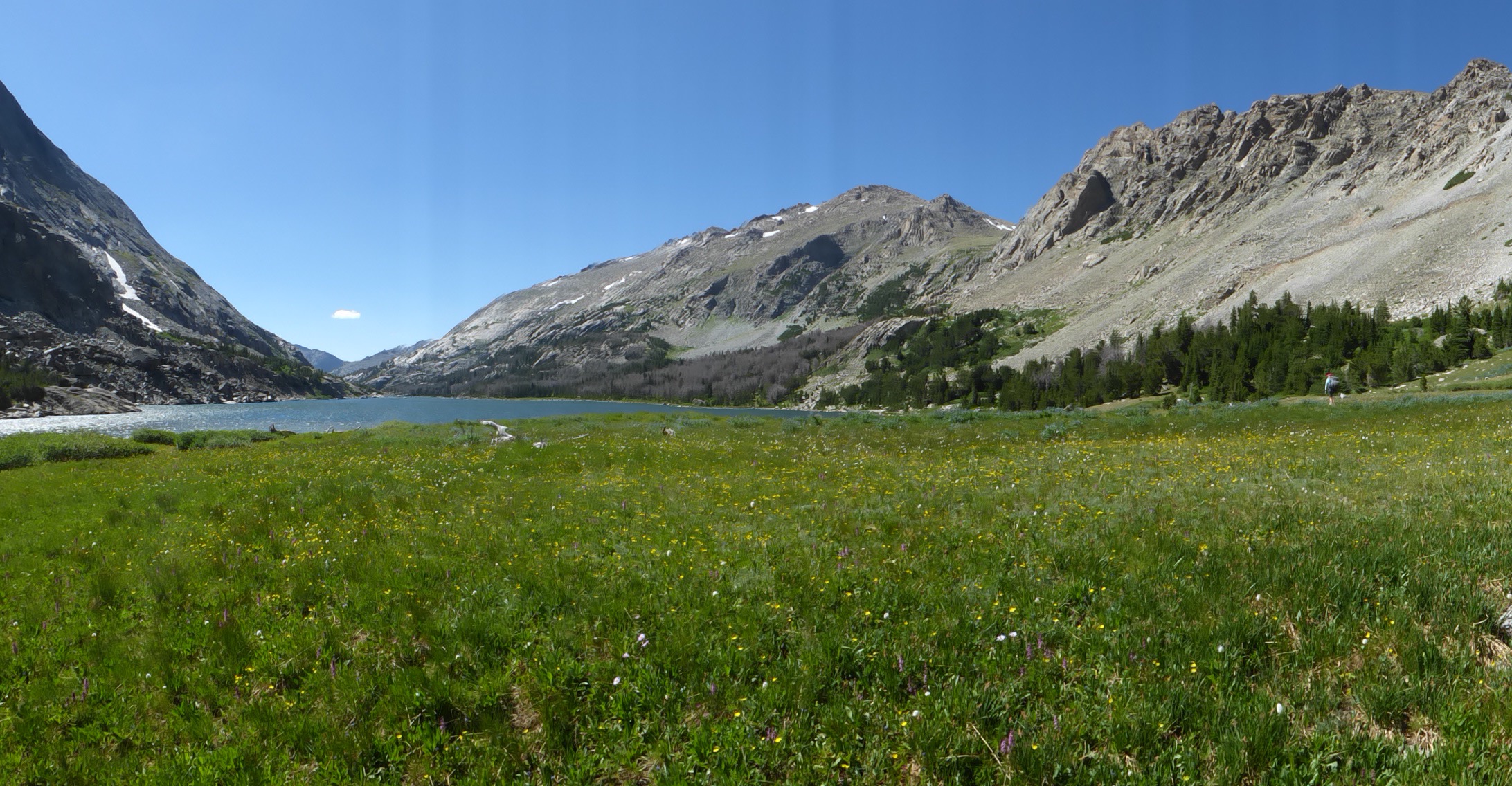 Good thing is that this has happened before, so I keep copies of all of it on my phone along with a track. So it’s more of an annoyance and I am more mad that I left trash, particularly a Ziploc, out in the wilderness. Not happy about that one. However, I think the scales are still balanced because I did find a big fancy multi-tool while going up Wind River Peak this morning that I’m packing out to Big Sandy Lodge tomorrow.
At the end of Black Joe Lake was a cliff band that required hiking up and over on a light use trail. That took longer than expected and nixed our plans for hiking further than our planned camping for the day. At the end of the light use trail was a down climb that looks worse from the bottom than it was. Across from Black Joe Lake is Haystack Rock, which Pyrite and Chinchilla climbed today. We could see it all day and it was cool to think we were so close to overlapping. 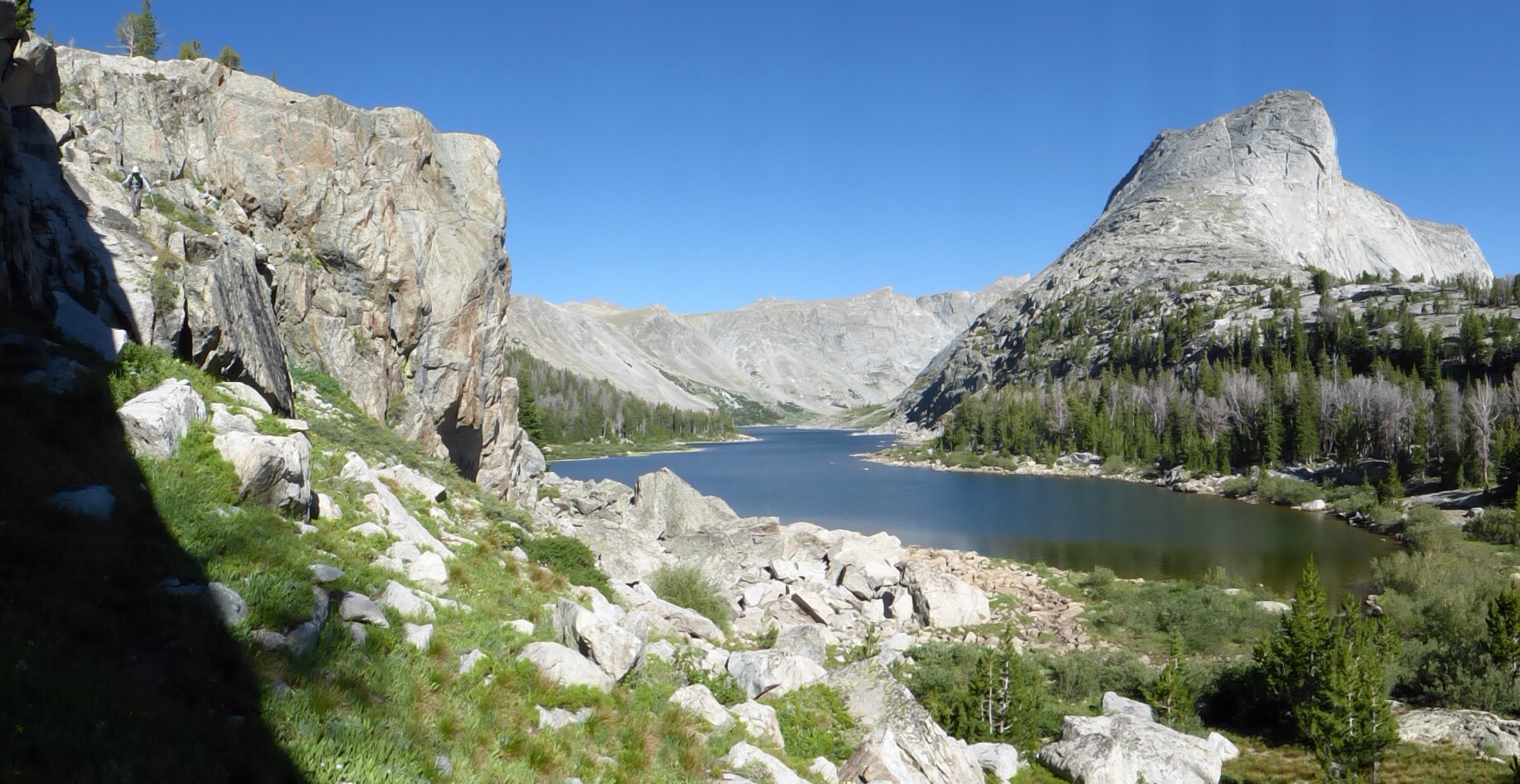 Why Not down climbing around the cliff band of Black Joe Lake with Haystack Rock on the other side.

From Black Joe Lake was about a mile of some wonderfully cruisey trail down to Big Sandy Lake. We had dinner at the end of the lake to be safe about bears and hiked a bit further to setup camp just after 7pm above the lake just before the climb to our next pass tomorrow. 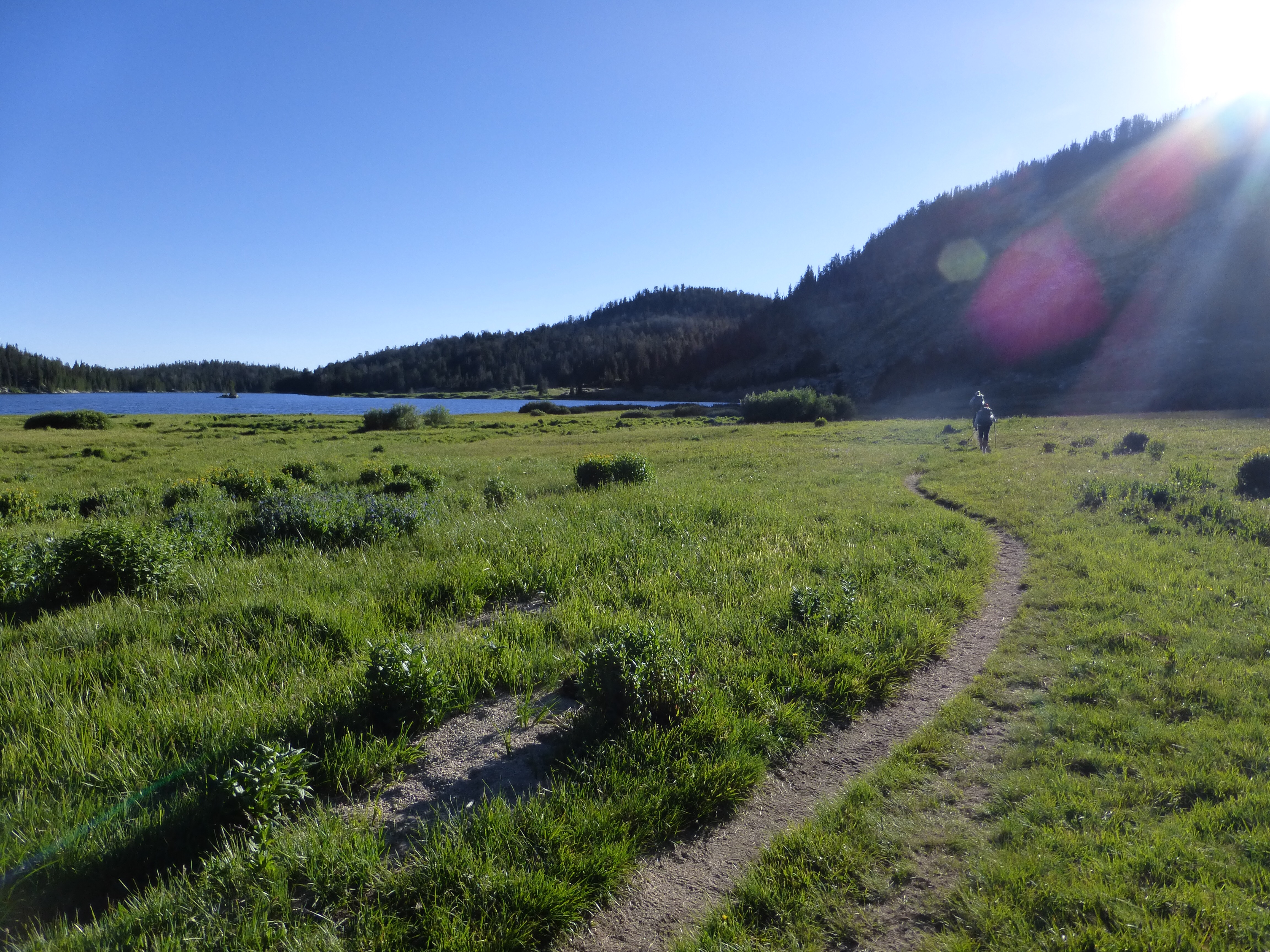 There are two things to note about where we are camped tonight. First, this is where we would start to overlap with CDT hikers for a bit into tomorrow, so maybe we’ll see one. This isn’t the official CDT, but this is the route into the Cirque of the Towers, which is a scenic alternate highlight for 90% of CDTers. We did have two day hikers pass our campsite today and those were the only people we saw today. The second thing to note is that this is the first section that the Skurka route will overlap with the Dixon/Wilson route. I know this information is important to those researching the two routes, so I will give my two cents, which is also the thoughts of all three of us.

We just spent two full days hiking to the point that is around mile 6 on the Dixon route. Would we say that it’s worth adding two days to the high route to do what we did the last two days? We all don’t think we’d recommend it to most people. The effort to reward ratio just wasn’t enough for us. There is an alternate route called the Coon Lakes Bypass to get down Wind River Peak and that may be much better. Even without that unnecessary descent, what we had the last two days was to start off the hike with 14 forested miles and a summit of an average peak (we were disappointed by the view), and walking by a few nice lakes. The good stuff starts tomorrow with the highly destined Cirque of the Towers. Dixon/Wilson’s route has just 6mi of nice hiking to lead to here. I’ll also add that these last two days pushed us beyond our comfortable carry limit of cumulative days of food, so we are doing a 9mi side hike tomorrow to resupply for the last 6 days. Without these two days, we wouldn’t have needed to resupply and this would have been a logistically easier trip. 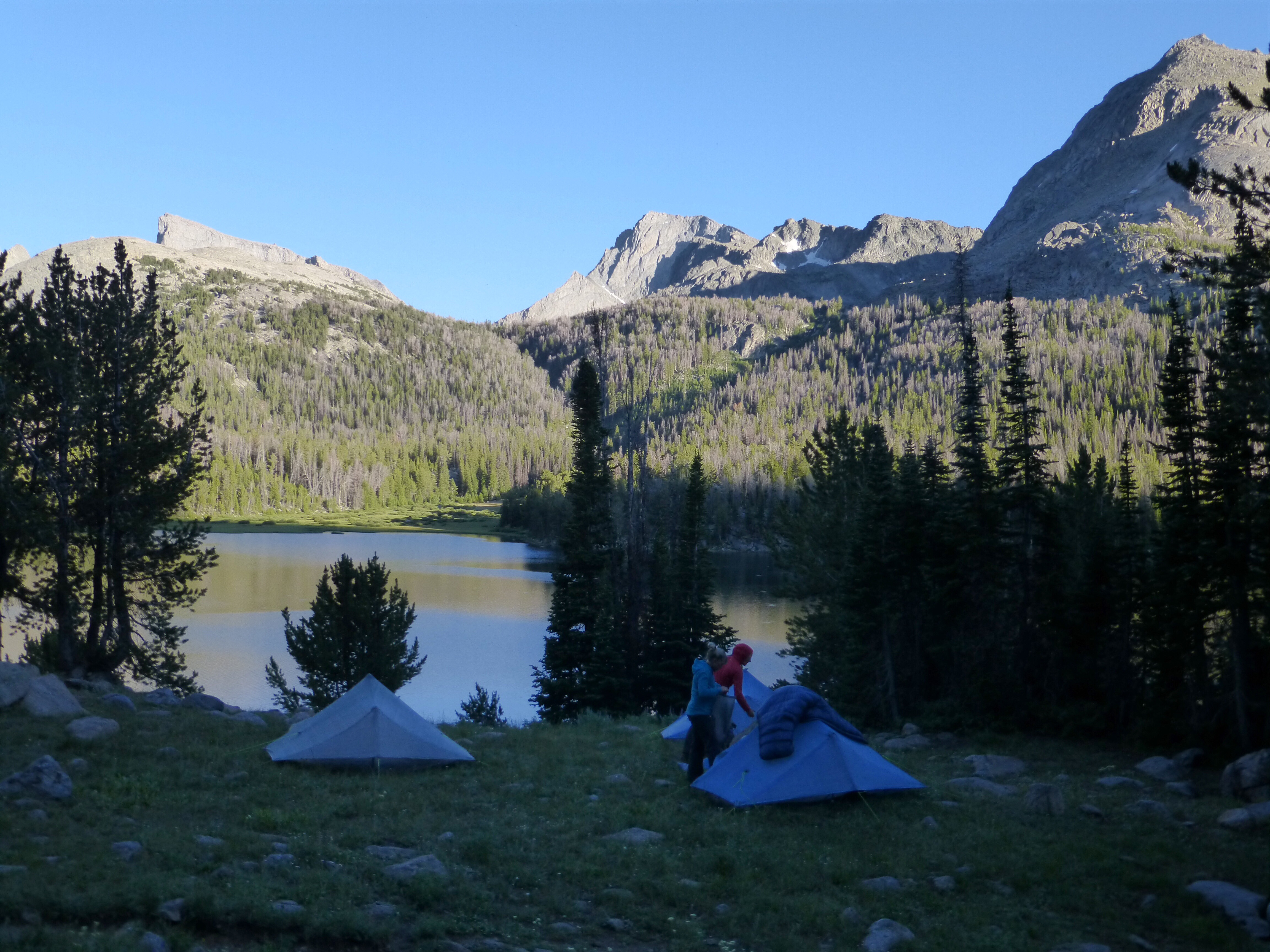 I leave it up to hikers to decide what timeframe they have and what is worth their time and effort. Again, all I can give is our experience as it happens. We are really looking forward to the rest of this hike and it looks pretty grand from here on!