Day 3: Cirque Of The Towers, Woot!

Man, a lot happened today! We kicked off the morning with the most visited part of the Wind River Range. The Cirque Of The Towers is not only scenic, but it draws droves of rock climbers. All of us have hiked the first three miles of today when we hiked the CDT. The Cirque Of The Towers is a must do alternate for most CDTers. It was fun to hike through it again because I forgot a ton of it. I forgot how much granite there was in the hike up. Much of the route was cairned to lead us up, over, and around large granite slabs when there wasn’t dirt trail. 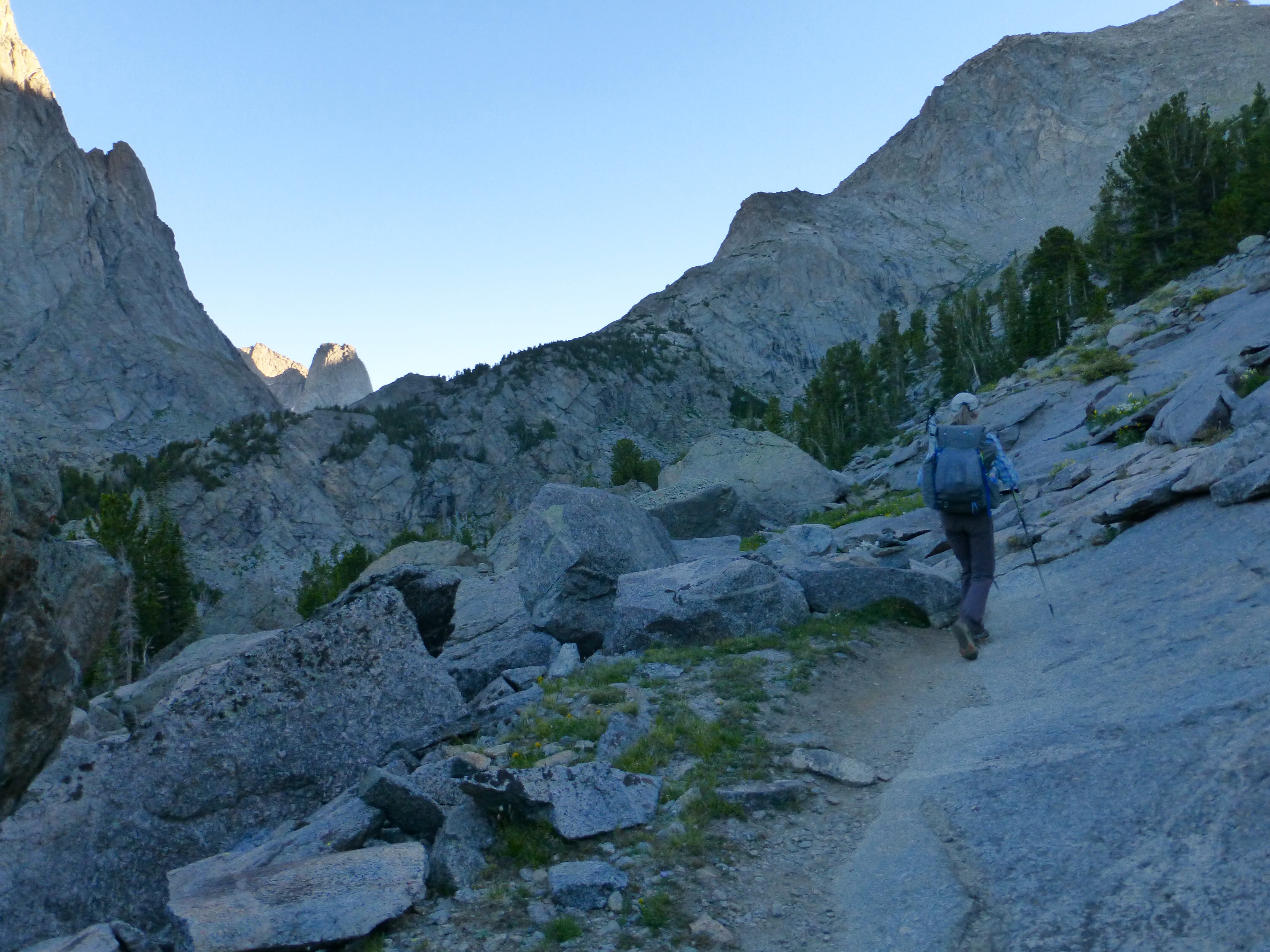 Why Not hiking through the granite with the Watch Tower starting to lite up in the distance. 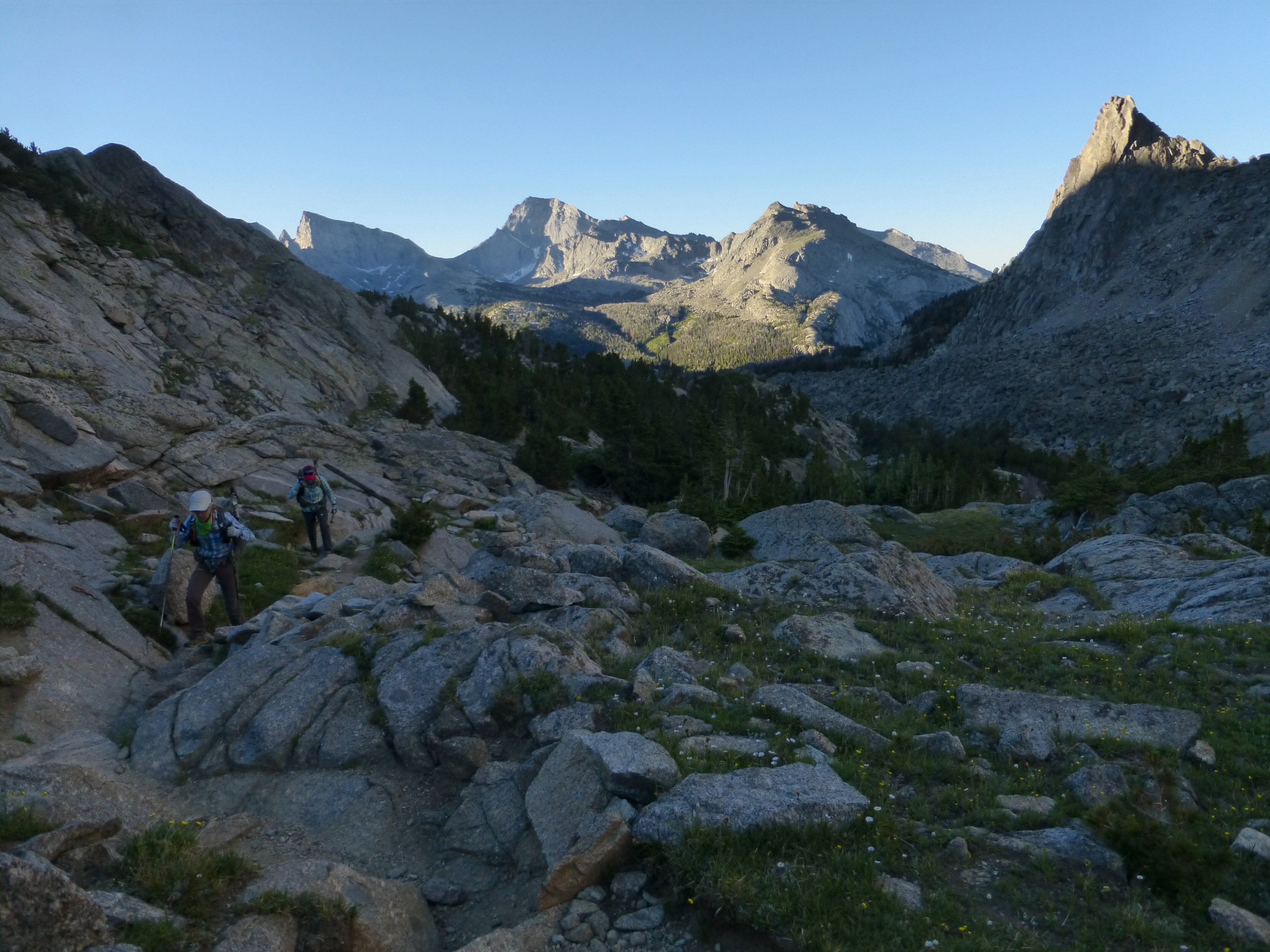 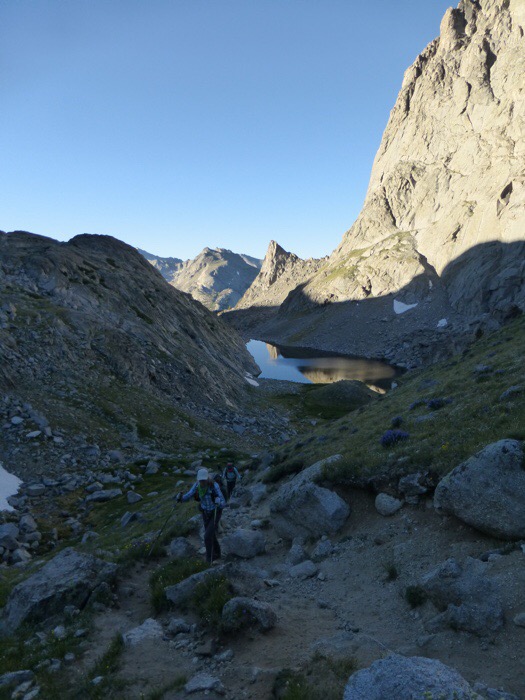 The hike up was great, and we hit Jackass Pass with the first full view of the Cirque Of The Towers. We had a choice to make, go over Texas Pass or New York Pass. 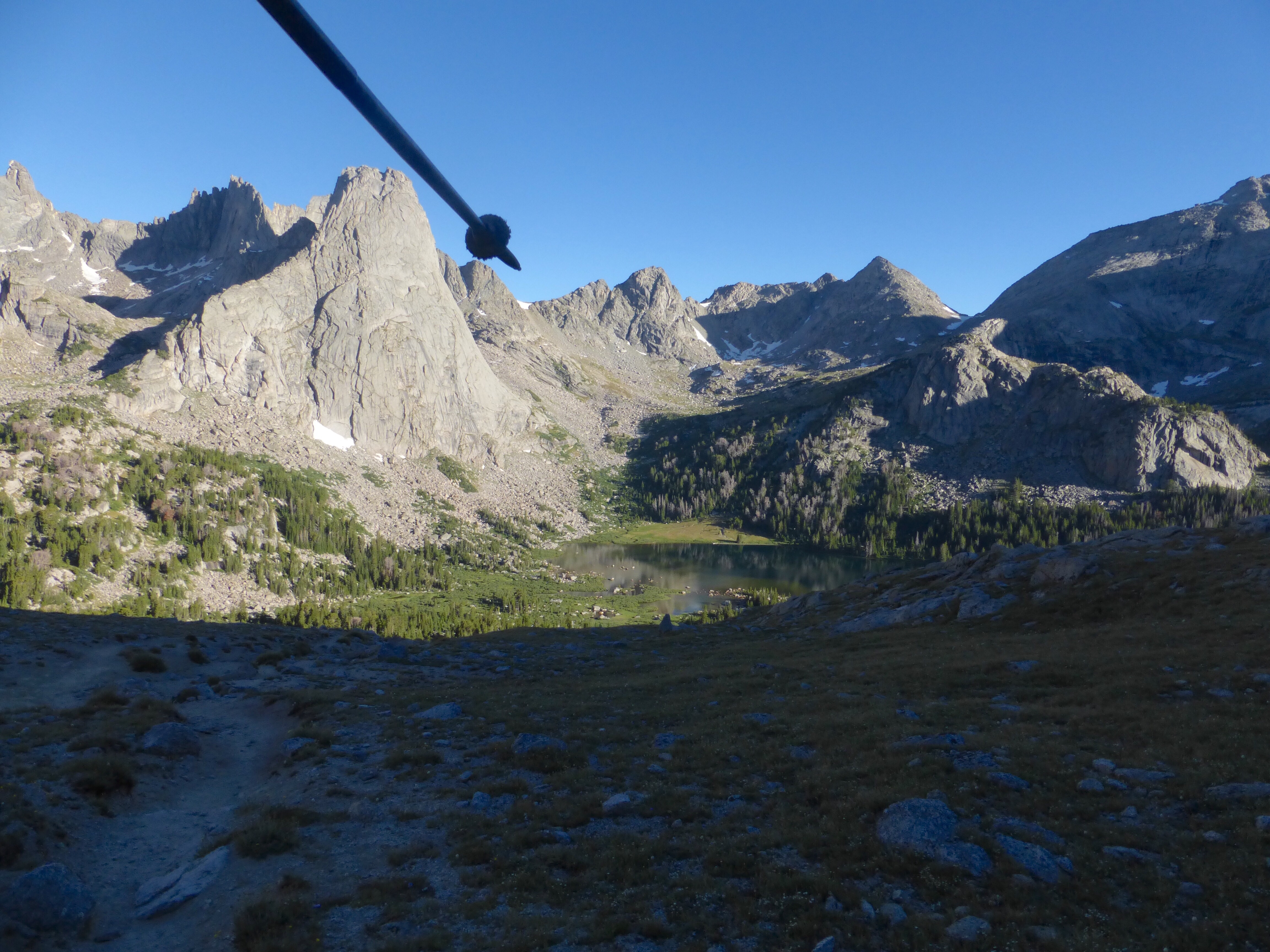 The view from Jackass Pass with Cirque Of The Towers. Pointing at New York Pass.

Lonesome Lake is in the center and the tall peak is Pingora Peak. We saw roped climbers climbing it way above us as we hiked by. Just to the right of Pingora Peak is New York Pass with the snow (cornice). The dip on the far right is Texas Pass. 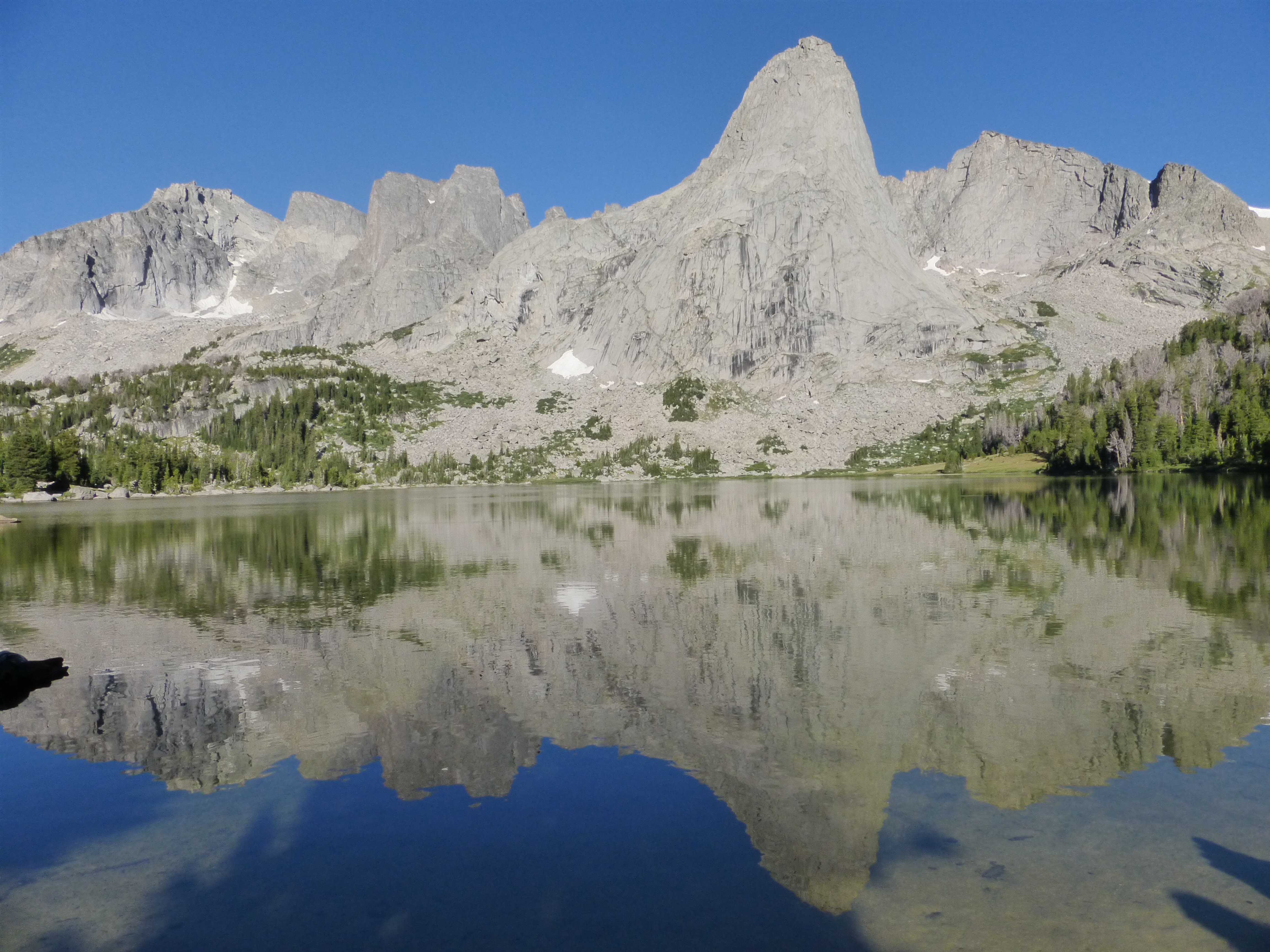 Morning reflection of Cirque Of The Towers on Lonesome Lake.

We all have done Texas Pass on the CDT, and it was a good one that’s on trail. New York Pass is shorter, but off trail, more technical, and slower going. We opted for New York Pass for something new. It was a nice pass that went smoothly. We started with grass, then boulders, then some scree and dirt. It was straightforward, and we were able to stay right and avoid the cornice. 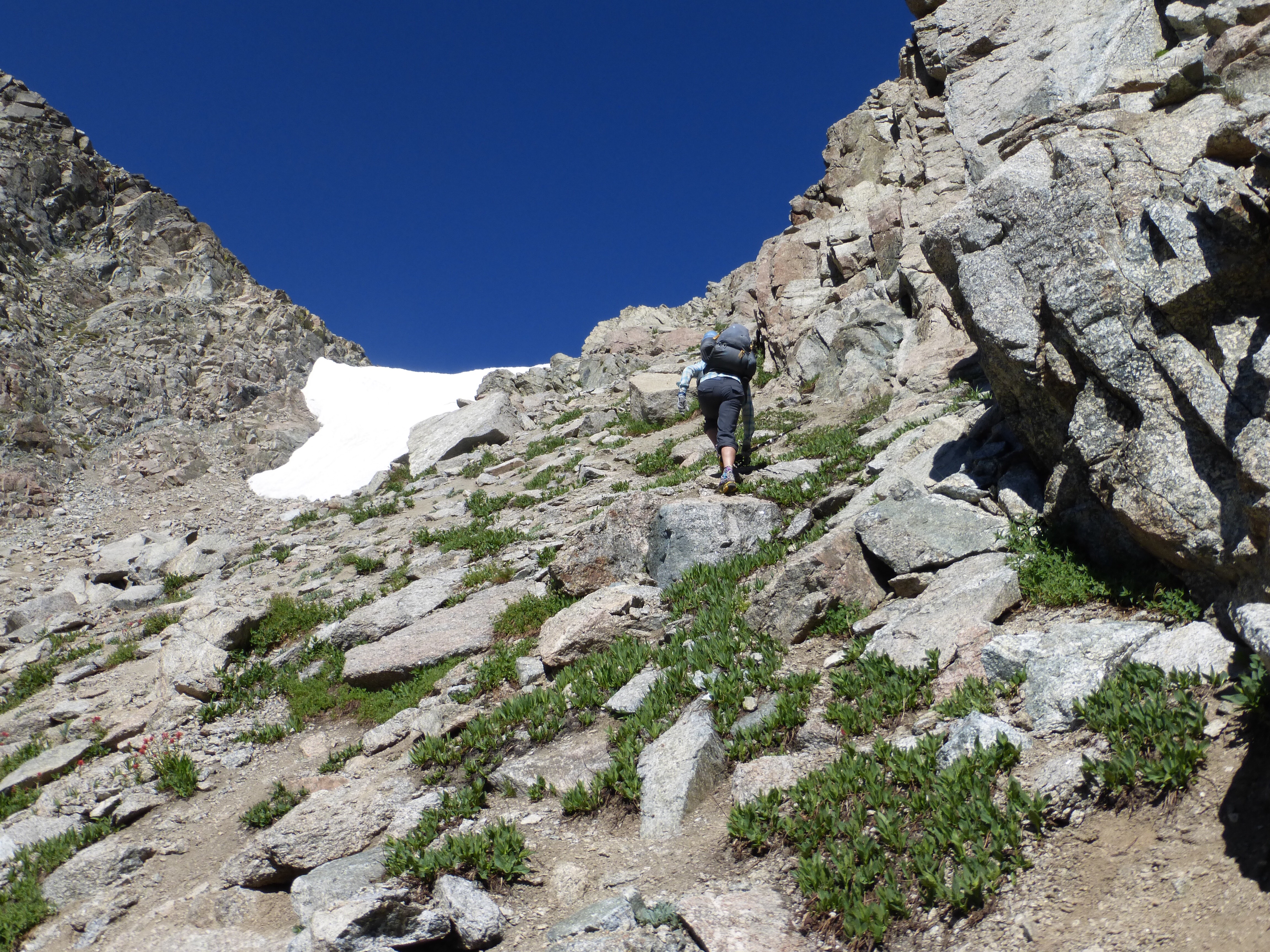 Cornice at the top of New York Pass. 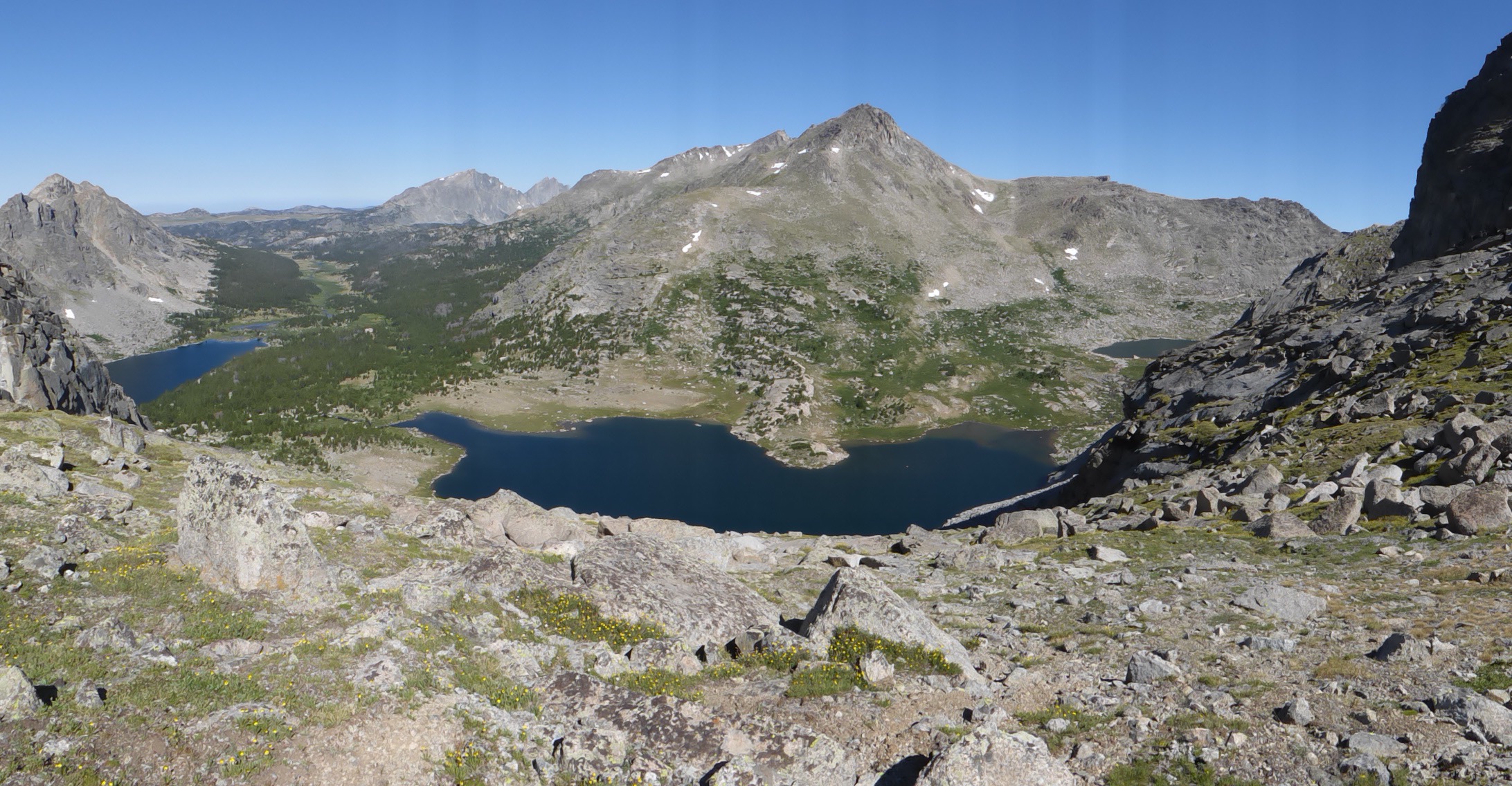 View looking back from the top of New York Pass.

Once over the pass, we had three gullies to choose from to get down. The guidebook said the middle one was the best, but from the top, there was some confusion as to which one would be considered the middle. The one on the right had two that seemed to meet partway down, so we guessed those were one and chose the next one. It was solid if you chose the bigger rocks. Toward the bottom, I chose the thinner dirt/gravel and it was like skiing down. Once at the bottom, we looked up and decided we probably did take the middle gully. 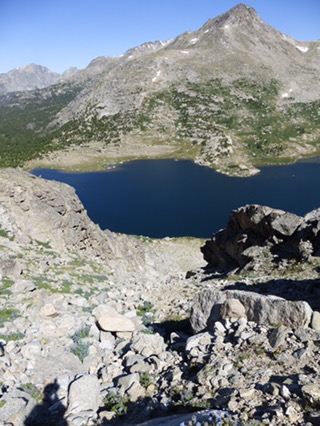 By the time we all got to the lake at the bottom, it was time for lunch. Starting at the end of the lake was trail for the rest of the day and nothing formidable. Our goal was to make it to Big Sandy Lodge for dinner tonight. To break up the food carry for this trip, we decided to carry 3 days, hike a 9mi side trail to Big Sandy Lodge, spend the night, and then hike out with 6 days. Yes, that does add 18mi to the trip, but it’s a question of if 3-4hrs of hiking each way is worth carrying less. I will say that this route could be done quicker than we are doing it. We are being conservative with our timing, and hikers that are faster on the off trail talus and boulder hiking could probably do it a day or two faster and eliminate the resupply side trip.

It was about 12mi of trail (3 on the route, 9 of a side trail) to Big Sandy Lodge. It was a great opportunity to get some solo time in, so I let Rockin’ and Why Not know I’d go on ahead and meet them at the lodge. I like getting some solo time to cruise and recharge on trail when these opportunities come up and it was also a good way to ensure that the lodge knew to expect us for dinner. They are a small place and only make enough food for the guests that are there. As part of staying there, they provide three meals, and we wanted to make sure dinner tonight was one of them. 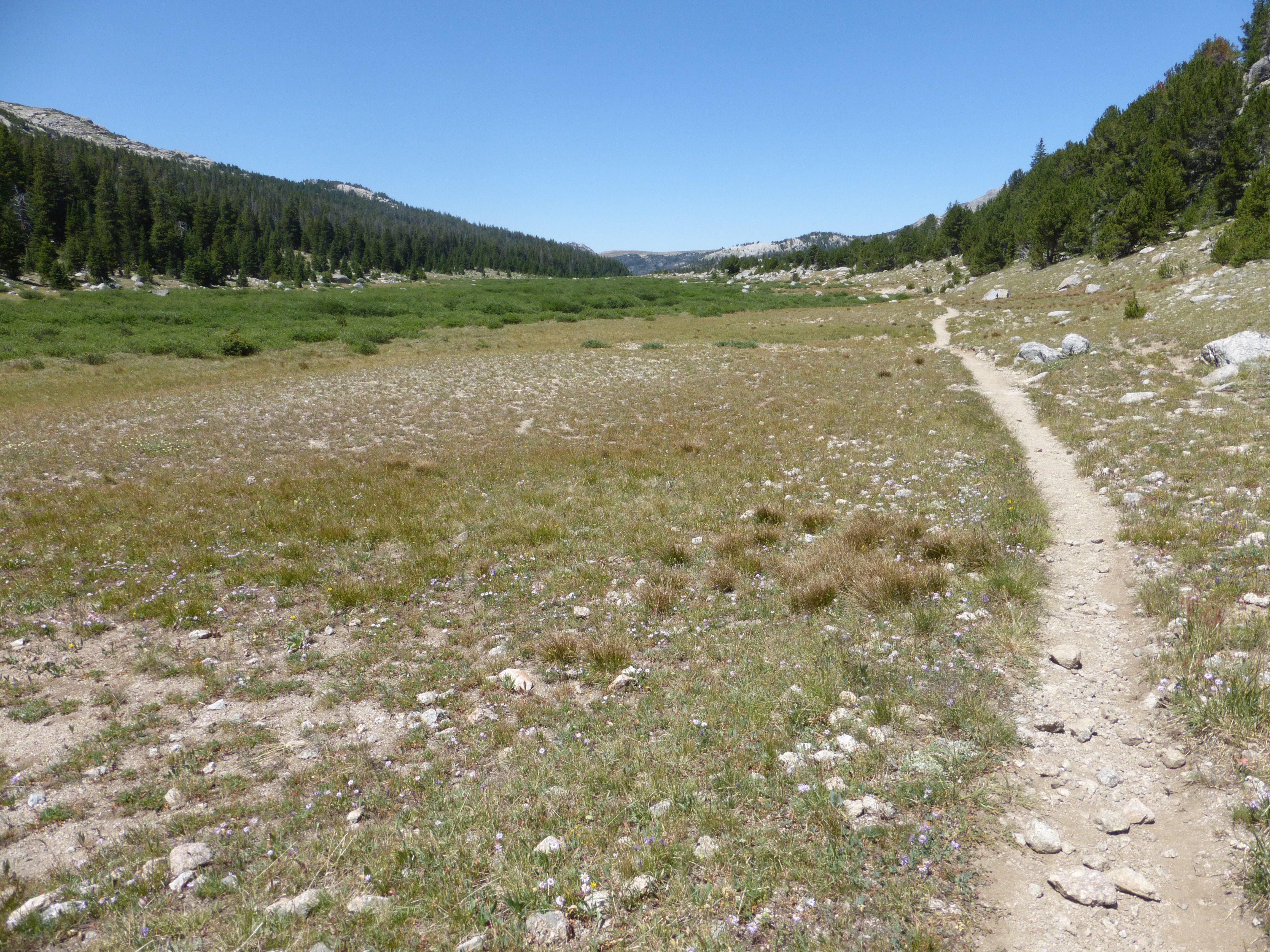 Nice open trail before the turn off. 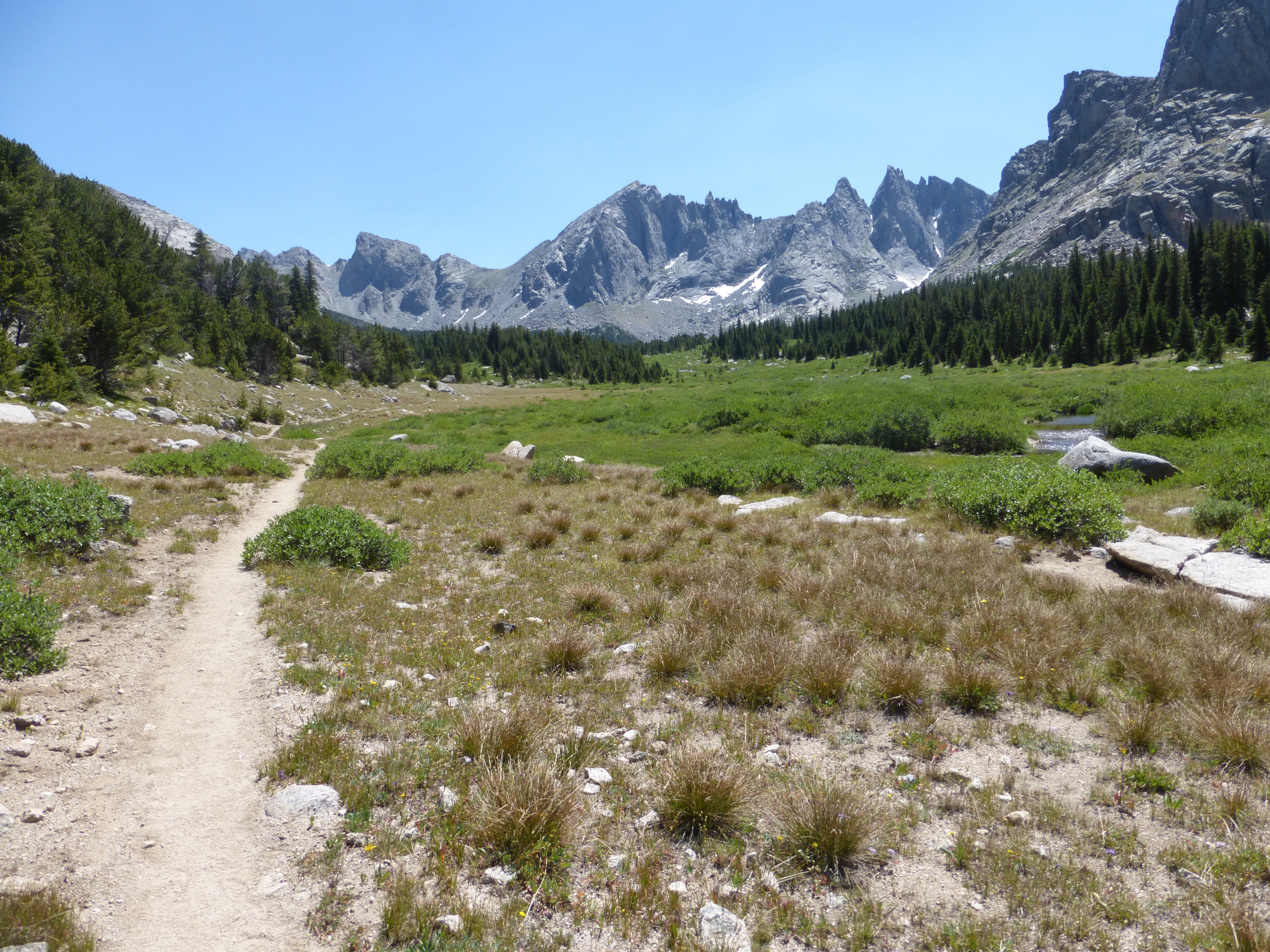 Looking back on the other side of Cirque Of The Towers.

It was a nice cruise down to the lodge. It was a dusty trail with lots of horse droppings, but had many nice lakes. It turns out that much of it is on the portion of the CDT that most CDTers don’t hike because most do the Cirque Of The Towers alternate. I did run into one CDTer, Polar Bear, hiking this route recovering from an injury. We had also met a few days ago at the gear shop in Lander, so it was fun to cross paths again. 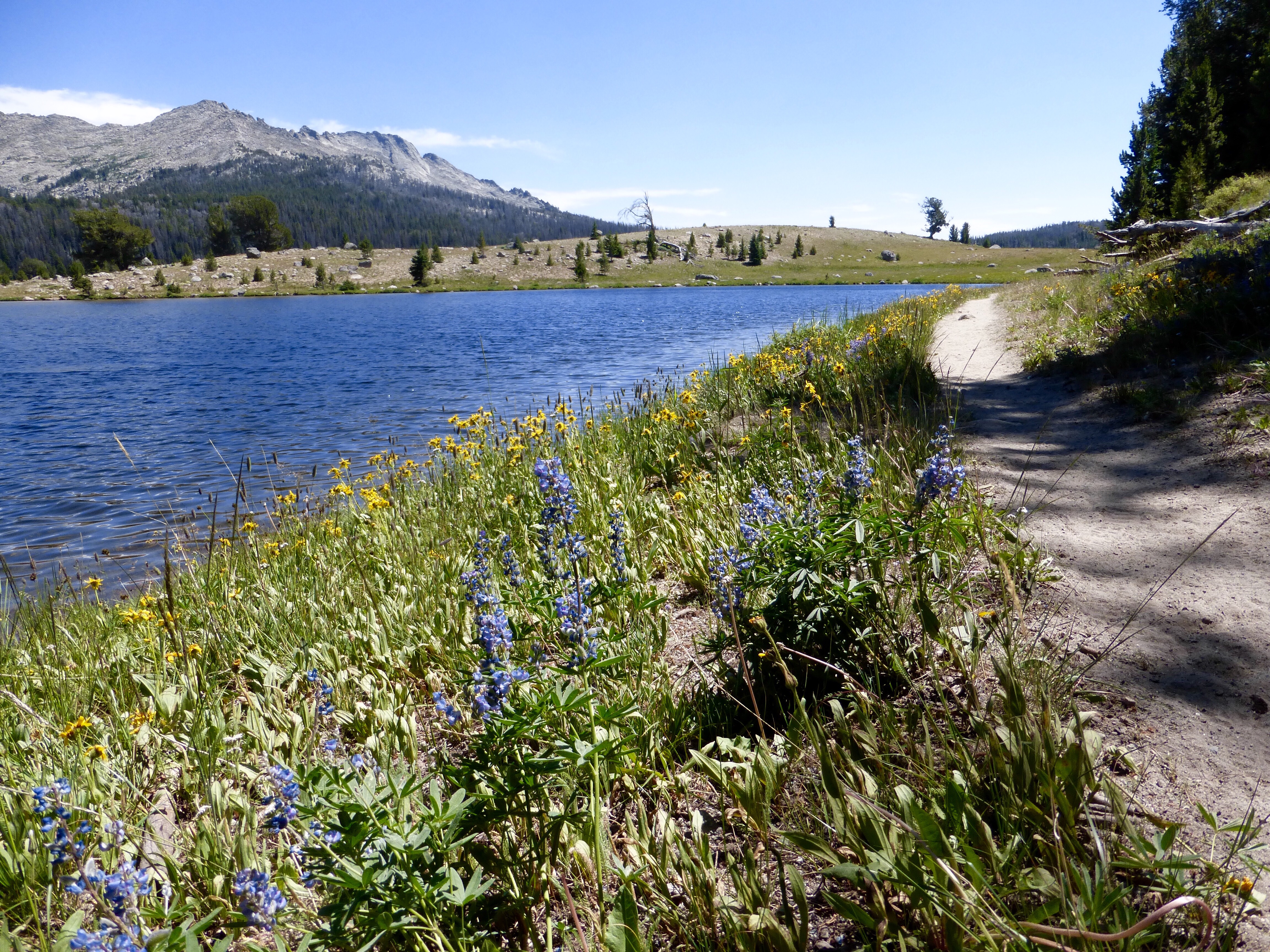 One of many lakes on the side trail.

Many groups were out, including backpackers, day hikers, horse packers, and even four guys with like 10 goats with huge saddle bags. The goats spread out as soon as they saw me and came right at me very interested. They were funny as they then plopped down and ate some grass. 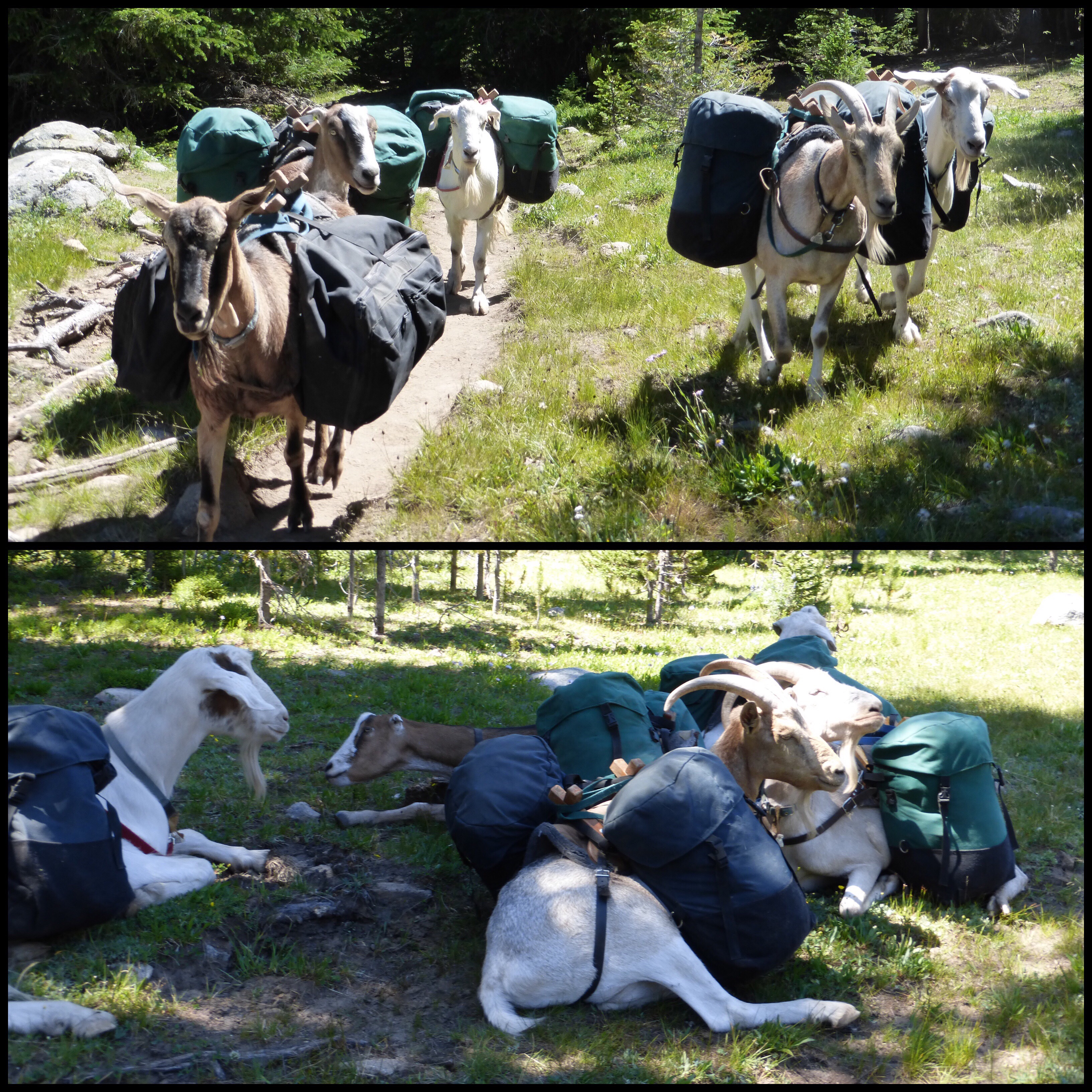 I didn’t have the exact directions to the lodge, but Why Not was there before and thought it would be well signed on the way down. I heard it was off the CDT and thought I’d even remembered seeing it from a distance when I did the CDT, but it turns out I was wrong. It’s not along the CDT and requires a side trail. I asked some people about the directions and got some general ones, but signage had nothing that made me 100% sure where it was.

I had and 50/50 shot at a fork in the trail and decided to hike to a trailhead that seemed about a mile shorter than the other option and I knew was a large trailhead with camping and a good amount of traffic. That way, if I was wrong, I could hitch a ride a mile or two to the correct place. Yep, I was wrong, but I got lucky and quickly found a couple driving out that ended up being the only other people staying at Big Sandy tonight, score! For future reference, the Big Sandy Lodge is along Mud Lake, which is actually quite pretty. 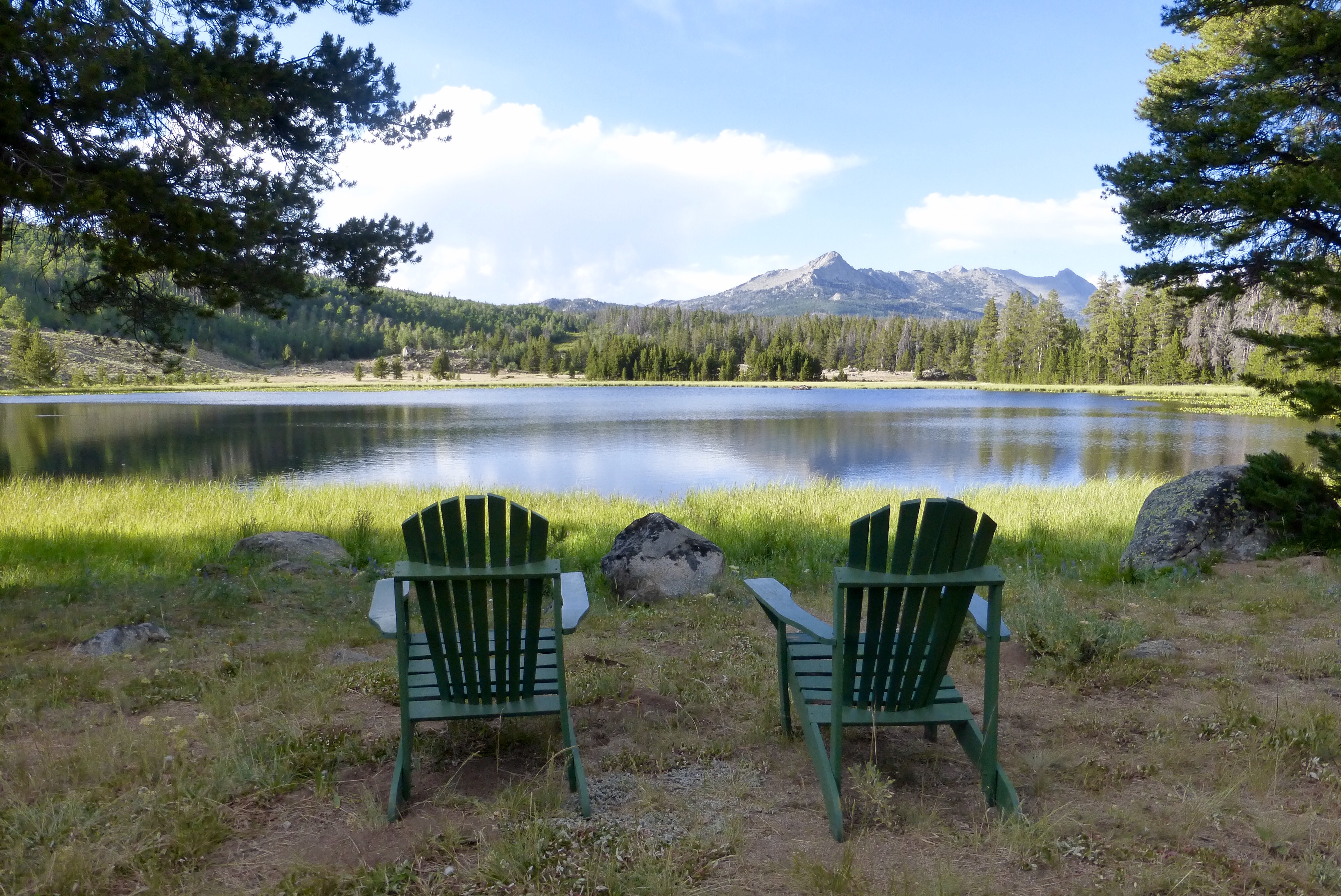 I got there at 4:15pm and got settled. It was good to have some alone time there. We’ve been together for five weeks now, and that’s a lot of group time for me. Good to have solo time to recharge. Rockin’ and Why Not arrived in time for dinner. The cabins are great and the meals are too! 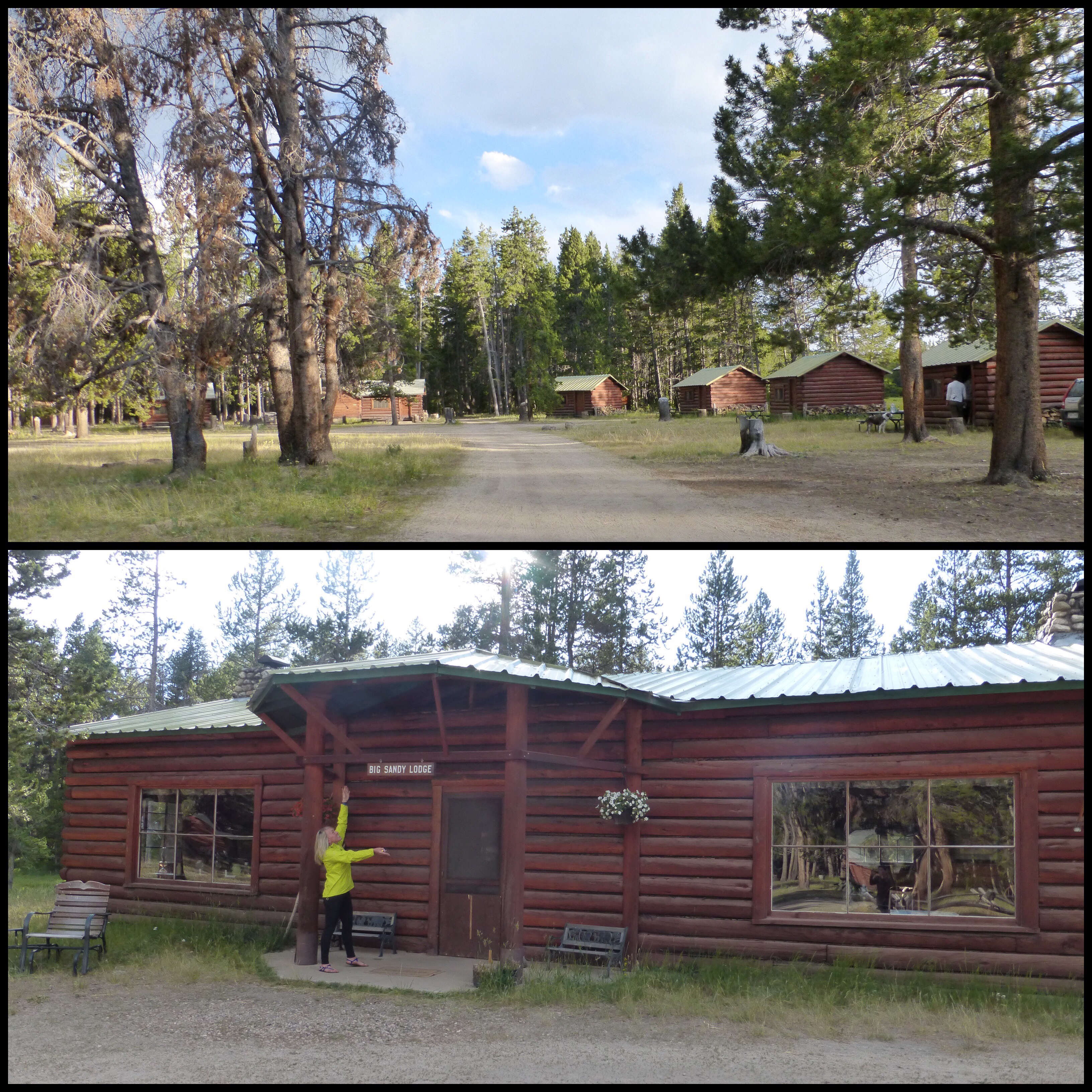 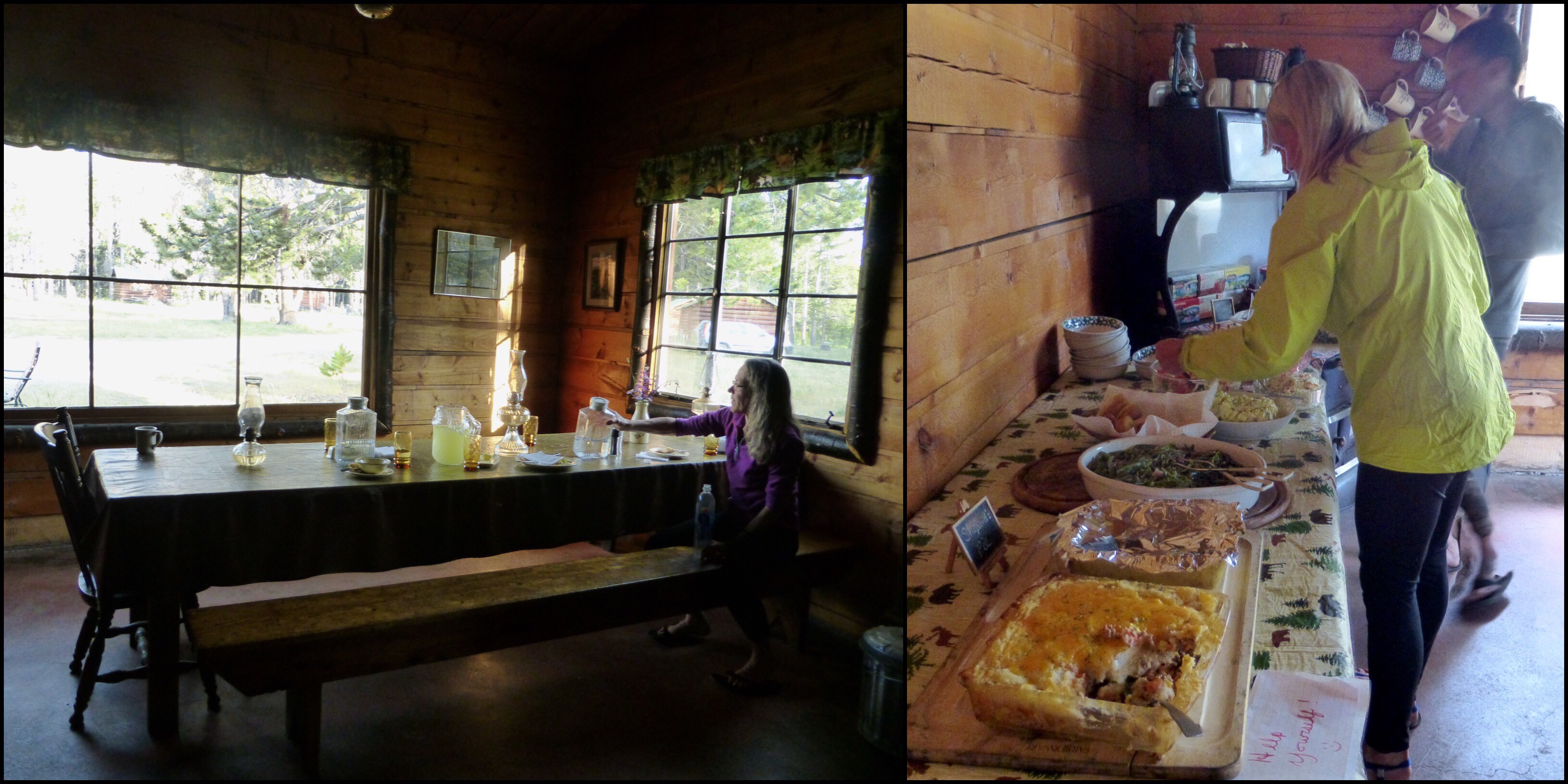 The Big Sandy Lodge and cabins are great for people looking to get away and recharge. There is no electricity in the cabins and no phone service or way to even charge things. We knew that going in and it is quite nice to be be somewhere with little distraction and just quality time along a nice lake in quaint cabins. The couple that gave me a ride earlier today (Ben and Lauren) went out fishing on the lake after dinner and the sunset was quite a special one. 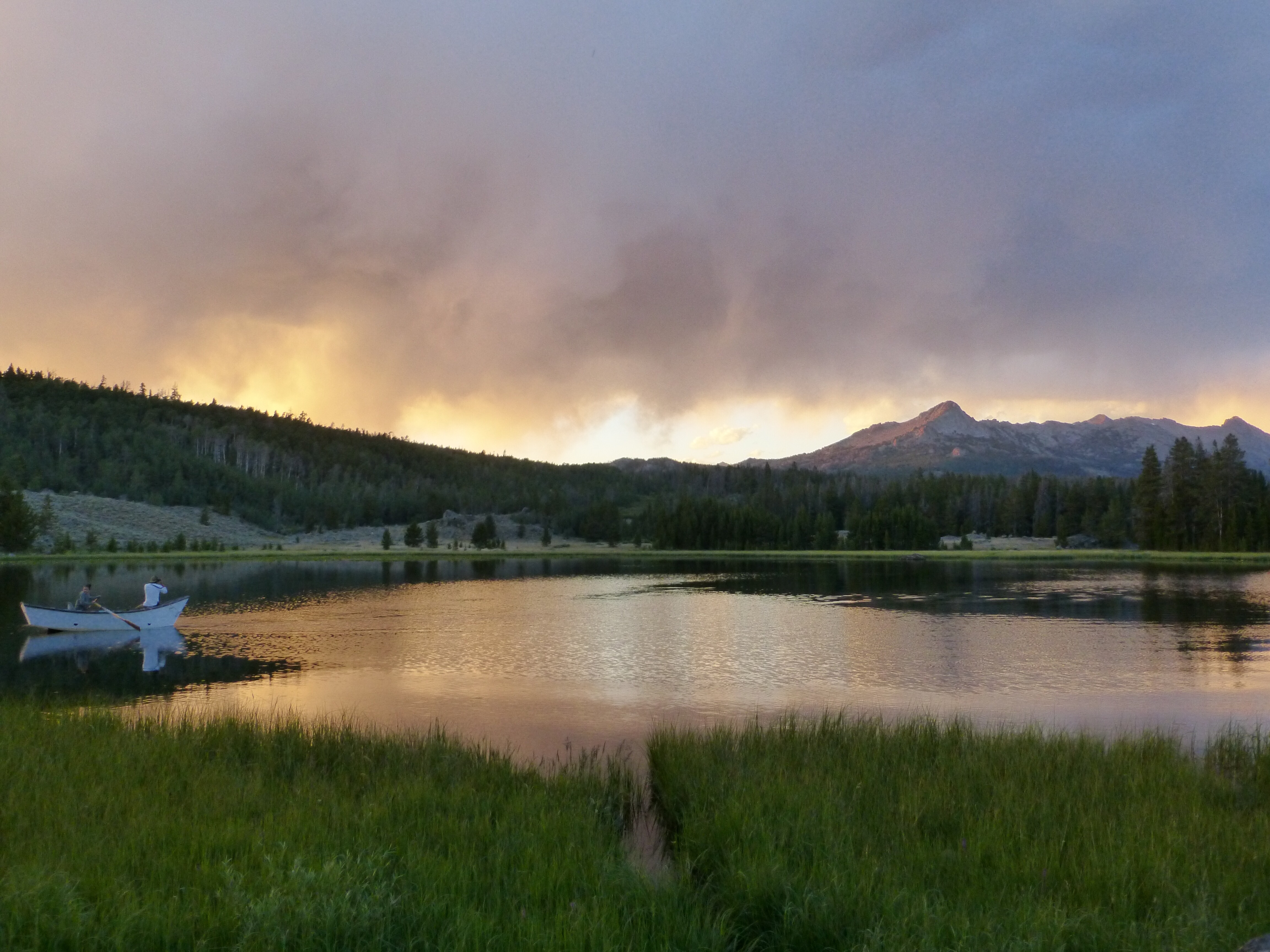 Now that I’ve been fully fed a great meal, and lying cozy in a bed, I’m pretty happy we made this side trip. Let’s see how I feel tomorrow when we hike back out the same trail for 9mi with 6.5 days of food in our packs. Hard to believe we were at Cirque Of The Towers just this morning. What a complete day!

Our home for the night.