We slept in! For the first time all summer on the trail, I didn’t set an alarm. It was pretty glorious. We only needed to do a 15.6mi day to reach our designated campsite, so we had plenty of time. Still, without the alarm, we naturally woke up pretty early and were hiking by 7:30am, but I don’t think I’ve ever left a camp that late when I’m really hiking. We only had about 5.5mi of downhill (2,052ft) to hike, and we were back at the Longmire Ranger Station, where we got our original permit the day before yesterday. Since the ranger station will hold your food for you in a cache, we took advantage of that and only had to hike with one day of food yesterday on our big day. 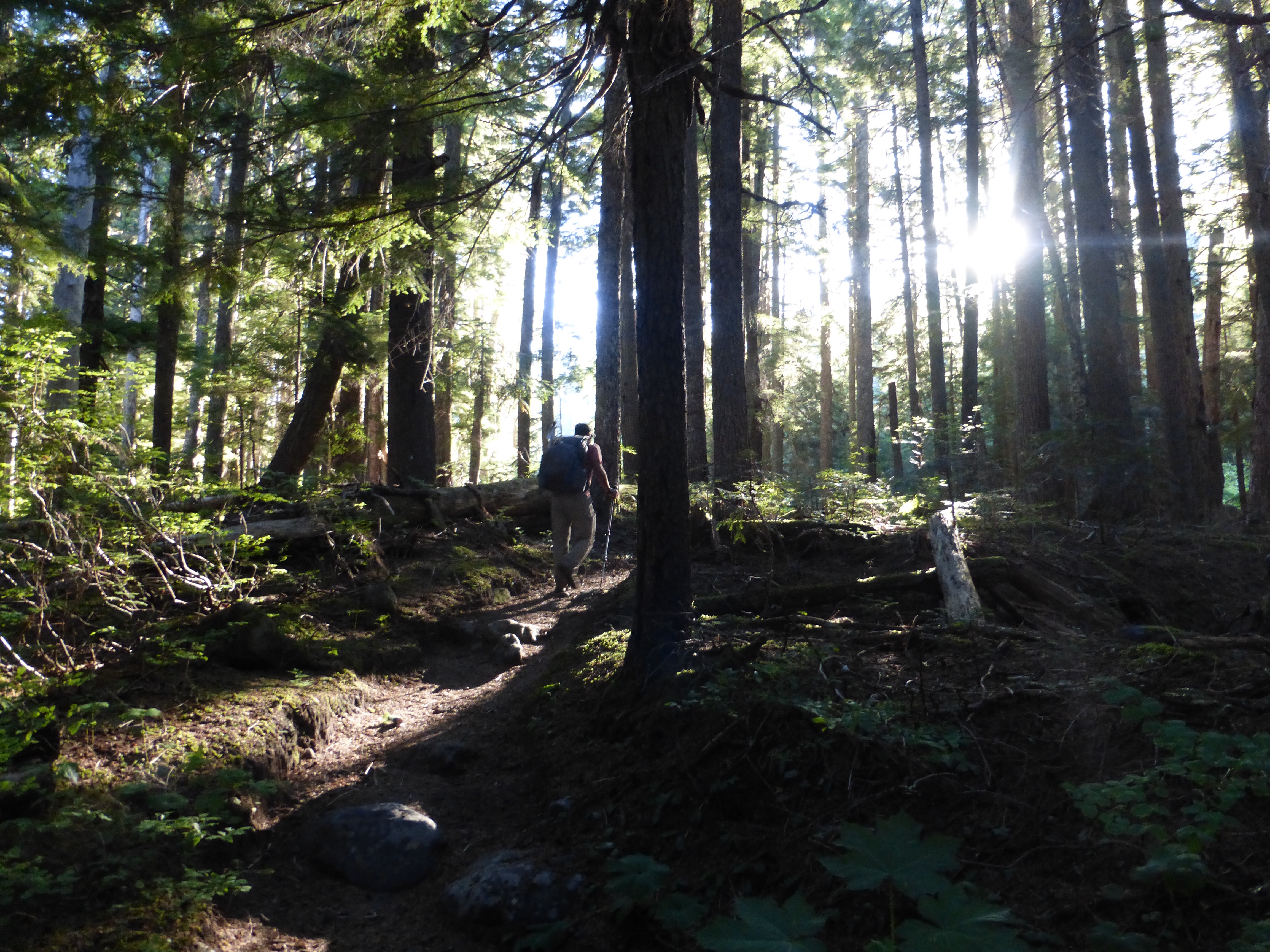 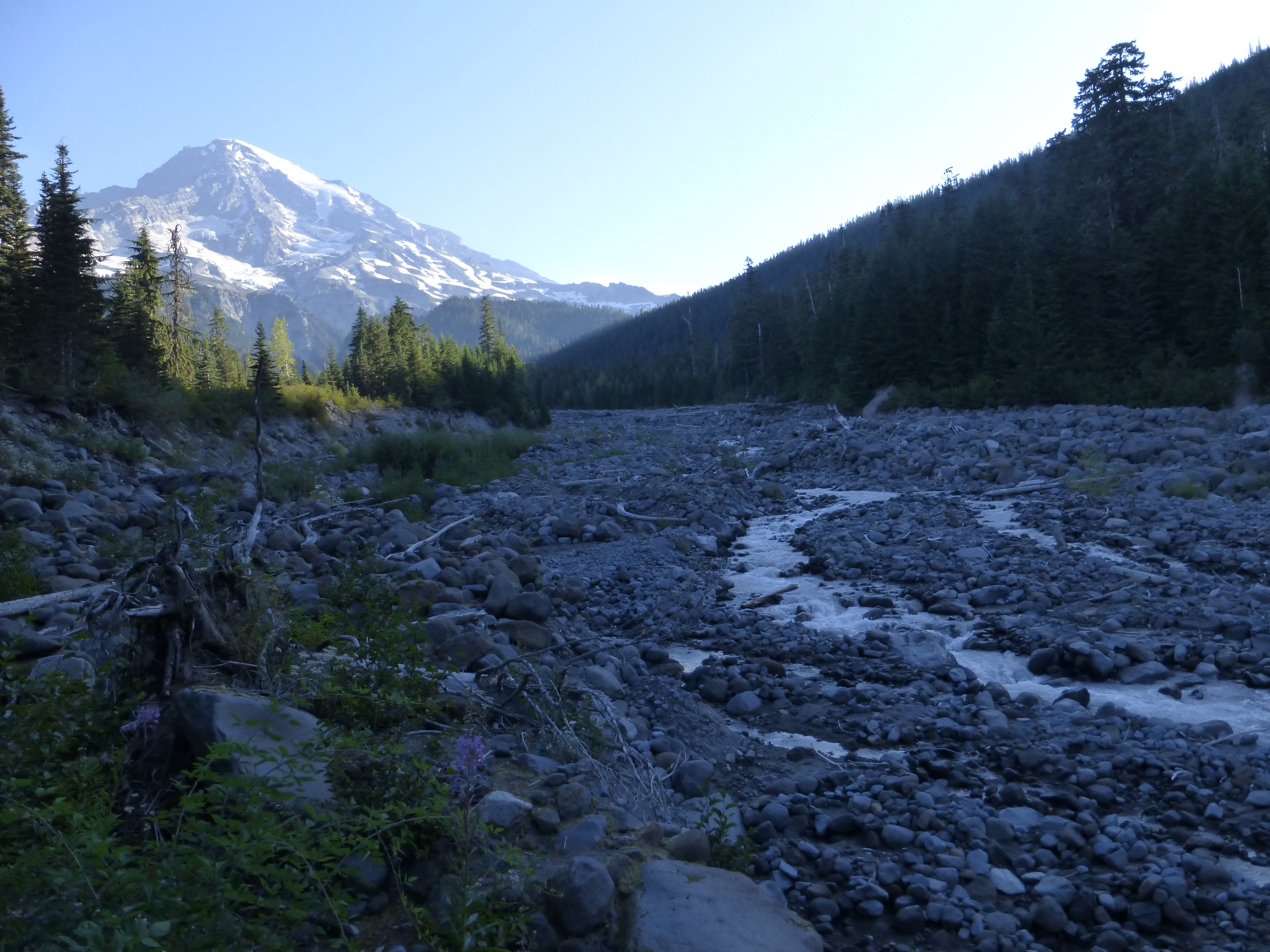 We arrived at Longmire by 9:30am and lounged there for 4.5hrs. There is also a restaurant there, and Buck-30 loves food, so he really has fun with hiker hunger and being able to eat anything he likes. He had breakfast and lunch at the restaurant, an ice cream bar, and five cans of Pepsi while we were there. That’s almost two liters! His obsession with soda (specifically Diet Coke) is unparalleled. He said 2L is nothing for him. I wasn’t craving anything enough to splurge on food after one day of hiking, so I stuck to my trail food and relaxed at a picnic table by the ranger station. 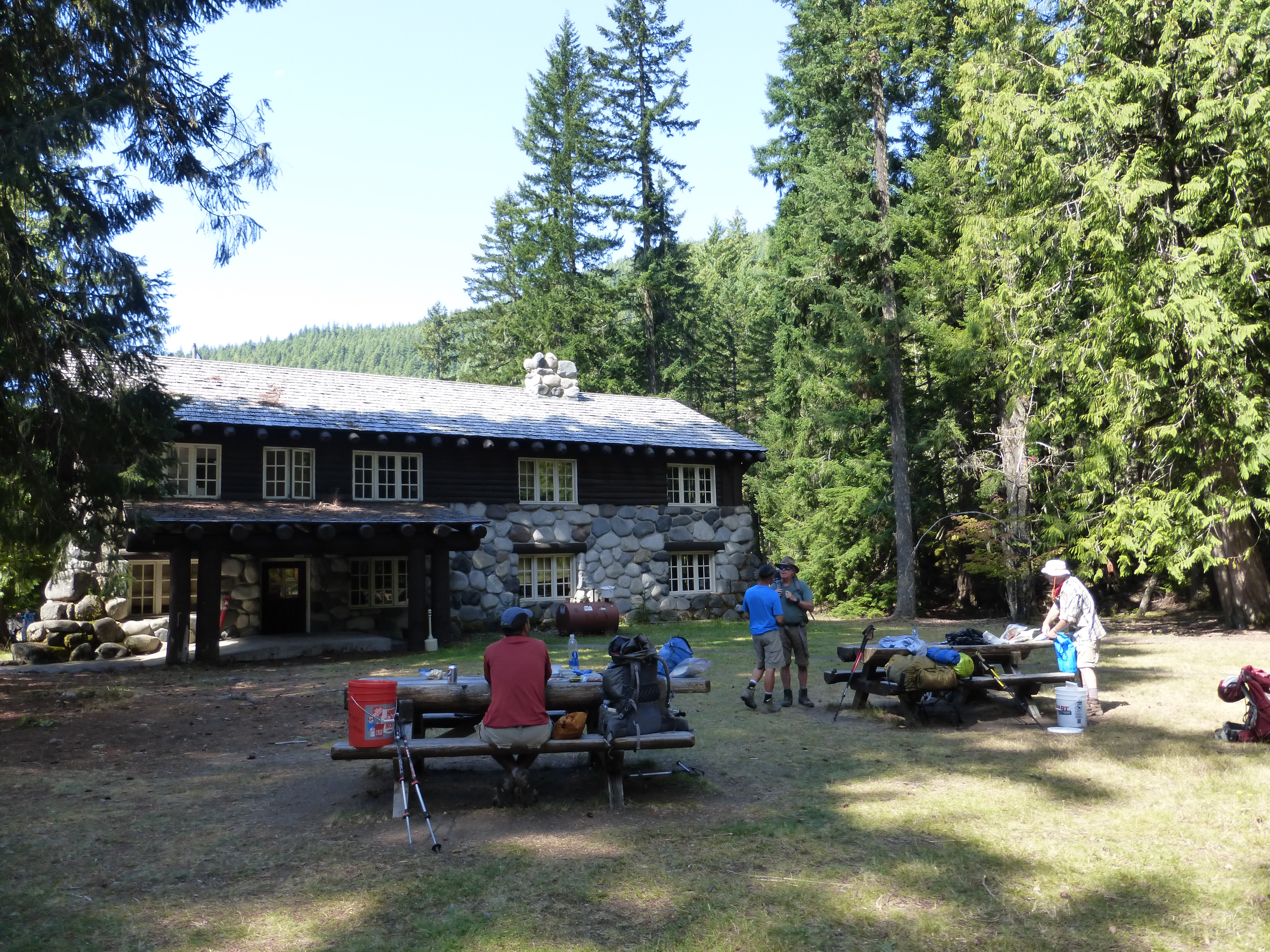 Where we spent much of the day behind the Longmire Ranger Station.

Today was the centennial celebration of the National Parks Service, so there were a lot of rangers and a few special activities. One ranger came by and was handing out candy. Another ranger station was doing cake for an hour, but we were nowhere near that. The park admission is free through the weekend, so it may be a madhouse in a couple days. I also want to mention, unrelated to this centennial celebration, that our permits for this whole hike were totally free. With all these campsites and pit toilets, I’m really surprised by that. I’d totally understand paying for this. There was a hiker box at the ranger station packed with food hikers had left behind. I found a dehydrated vegetarian chili meal that I heated up that worked out great for me. We both were quite full when we hiked out just after 2pm.

90% of today’s hiking was completely wooded. Our afternoon portion was 10.1mi. The big view of the day was crossing the Nisqually River with a view of the south side of Rainier. 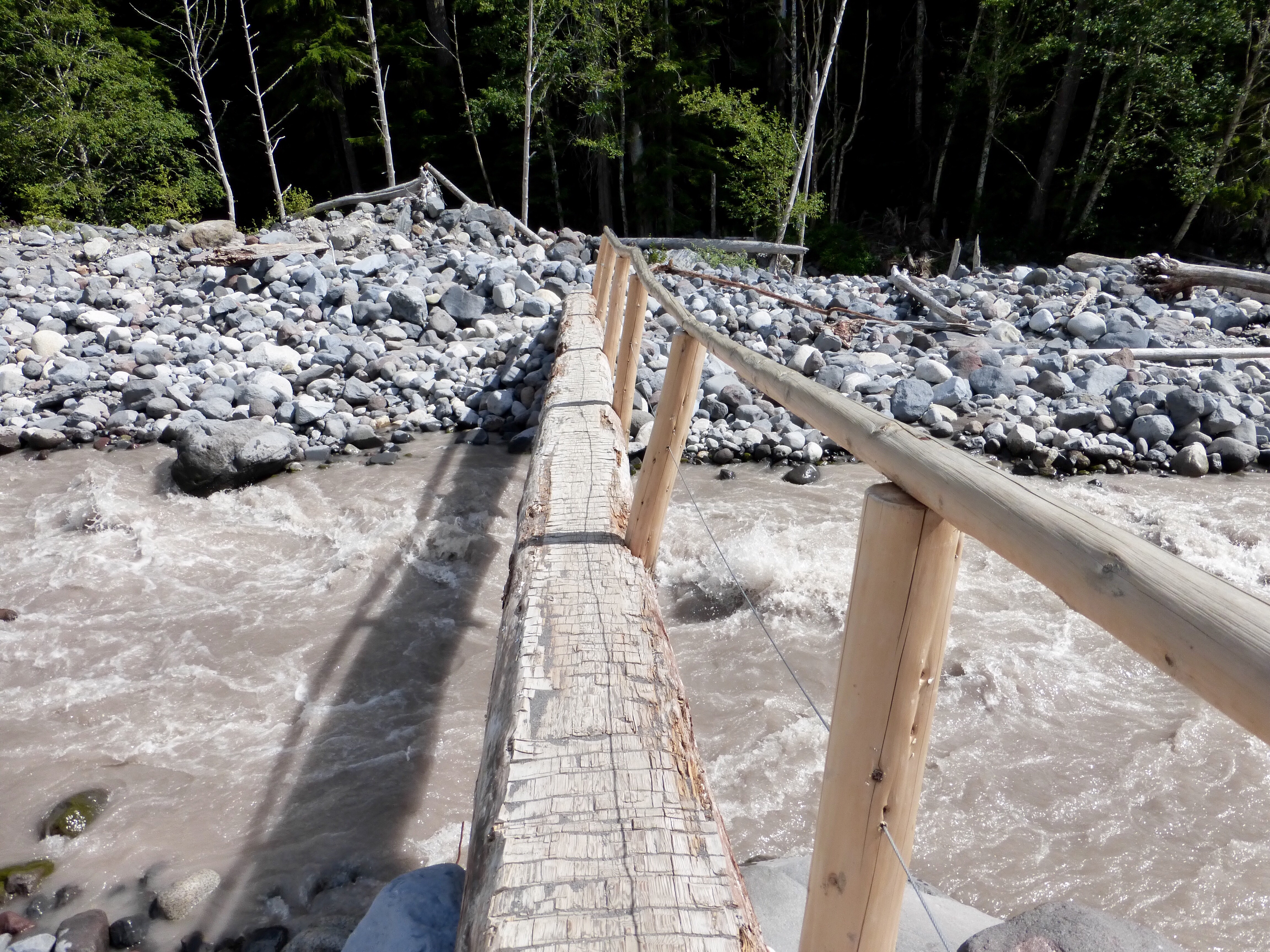 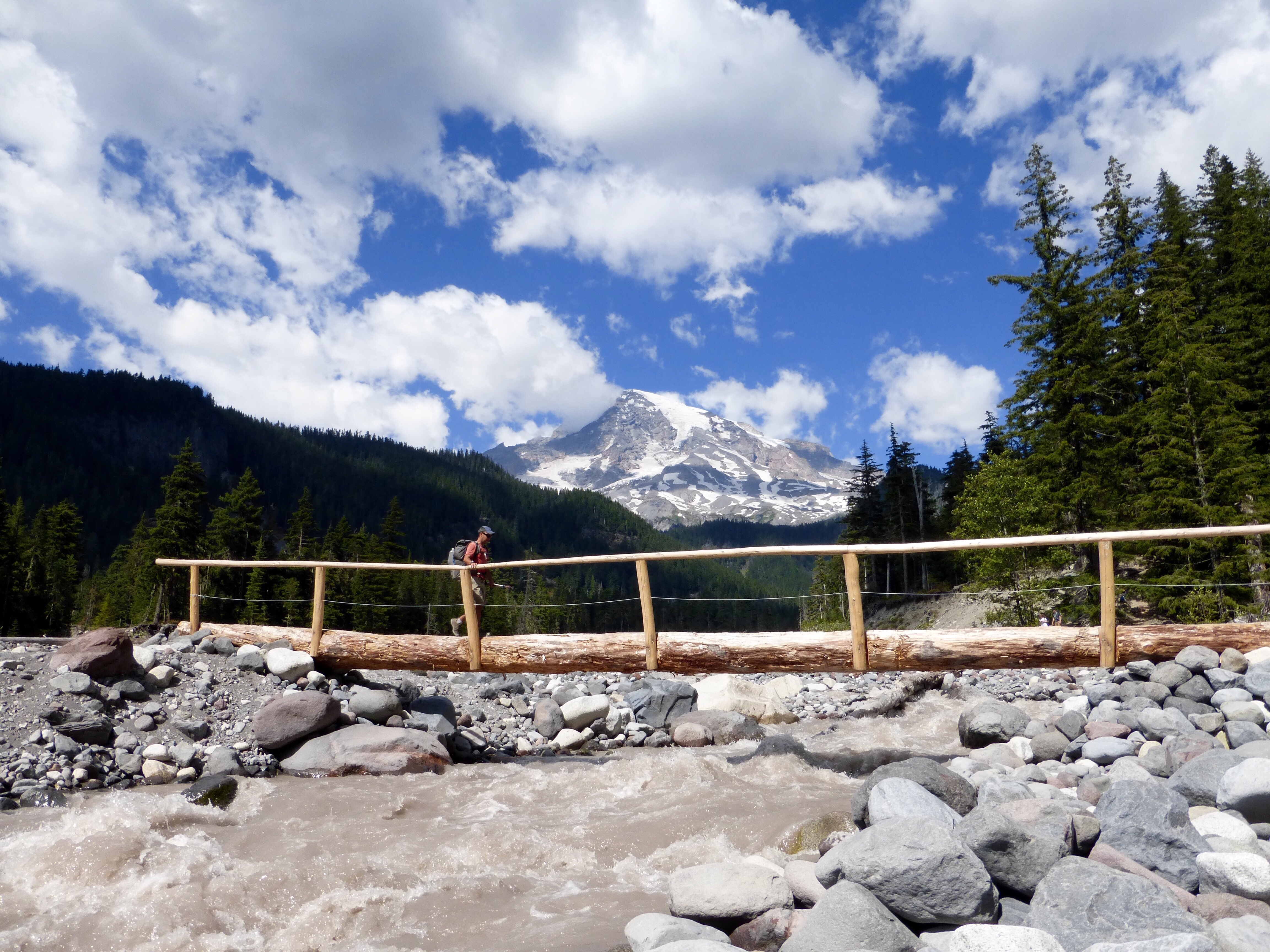 The first 5mi, we went up 2,040ft and passed many waterfalls. 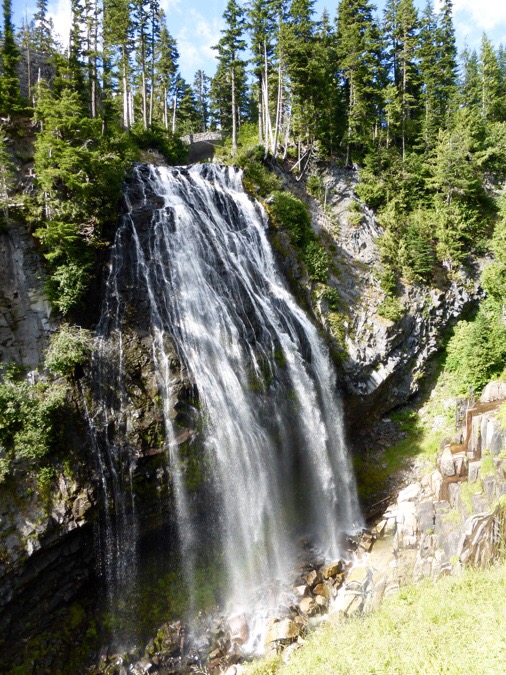 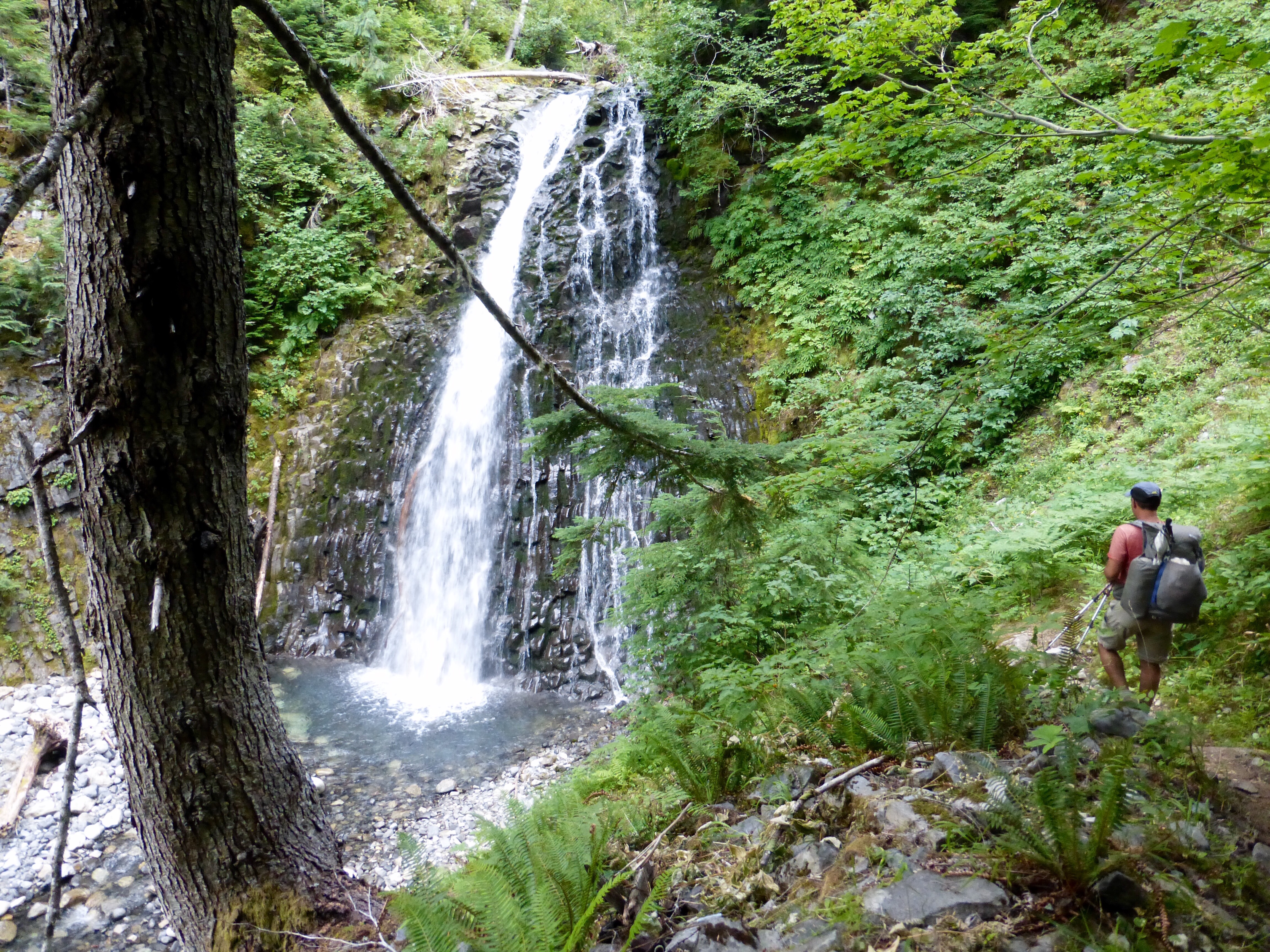 The trail was amazingly wide because it is near a road and many tourists can day hike it. Buck-30 was in heaven with no brush even touching his poles when he extended them fully to each side. 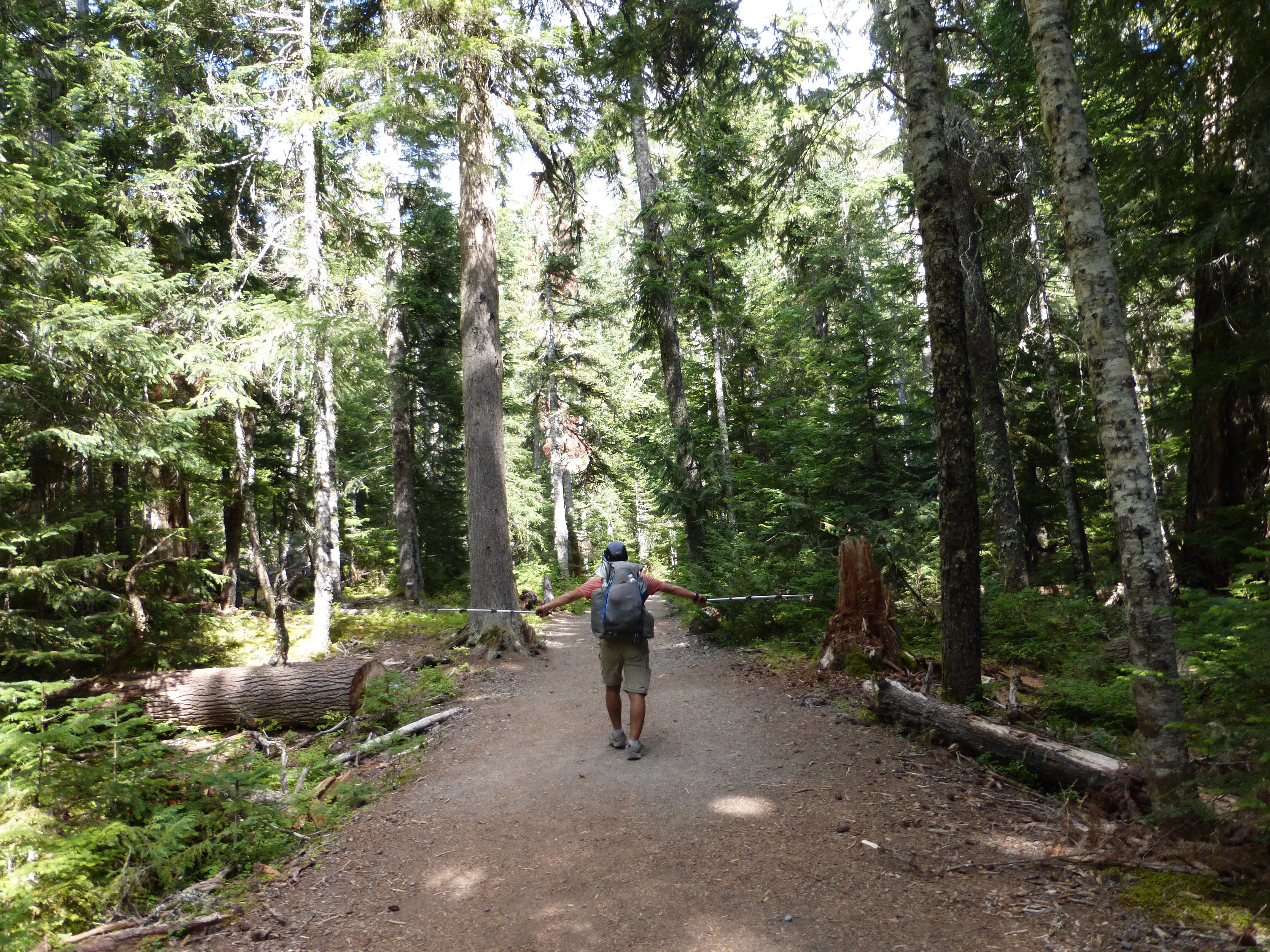 At the top of the climb is Stevens Canyon Rd, which we walked along for a bit, and Reflection Lake. We took a break there before heading down the next 5mi (2,049ft) to Maple Creek Camp. 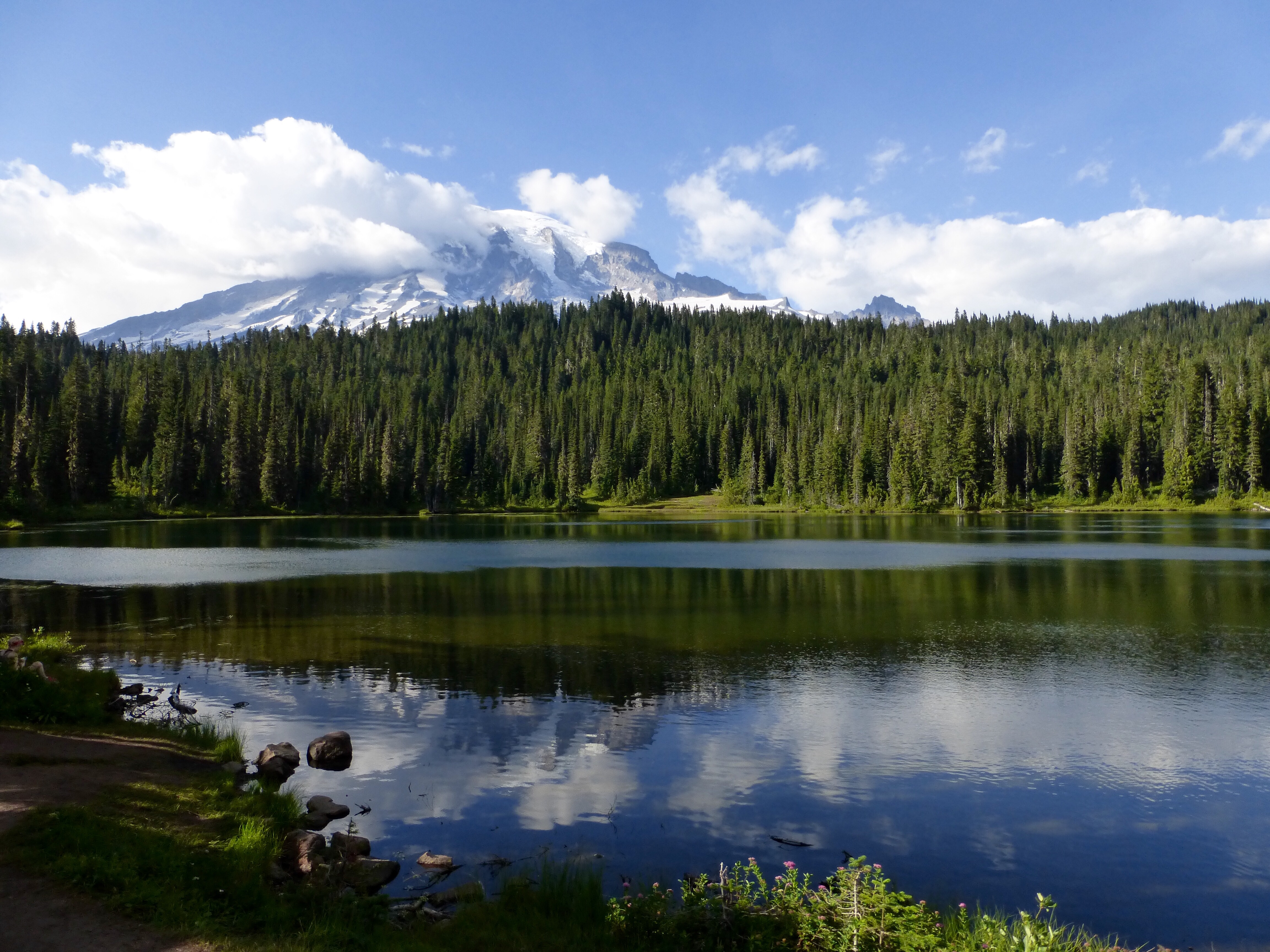 Buck-30, with his stomach of steel, also has the ability to drink water from practically any source without treating it and without filtering. He doesn’t even carry anything to treat his water if needed. I’m quite jealous of this superhuman ability. Most people I know that do this are very particular with their choosing of water, but Buck-30 can’t stand carrying water and just grabs randomly. He even drank out of Reflection Lake, with tons of tourists right off the road. Man, I wish my stomach could do that! 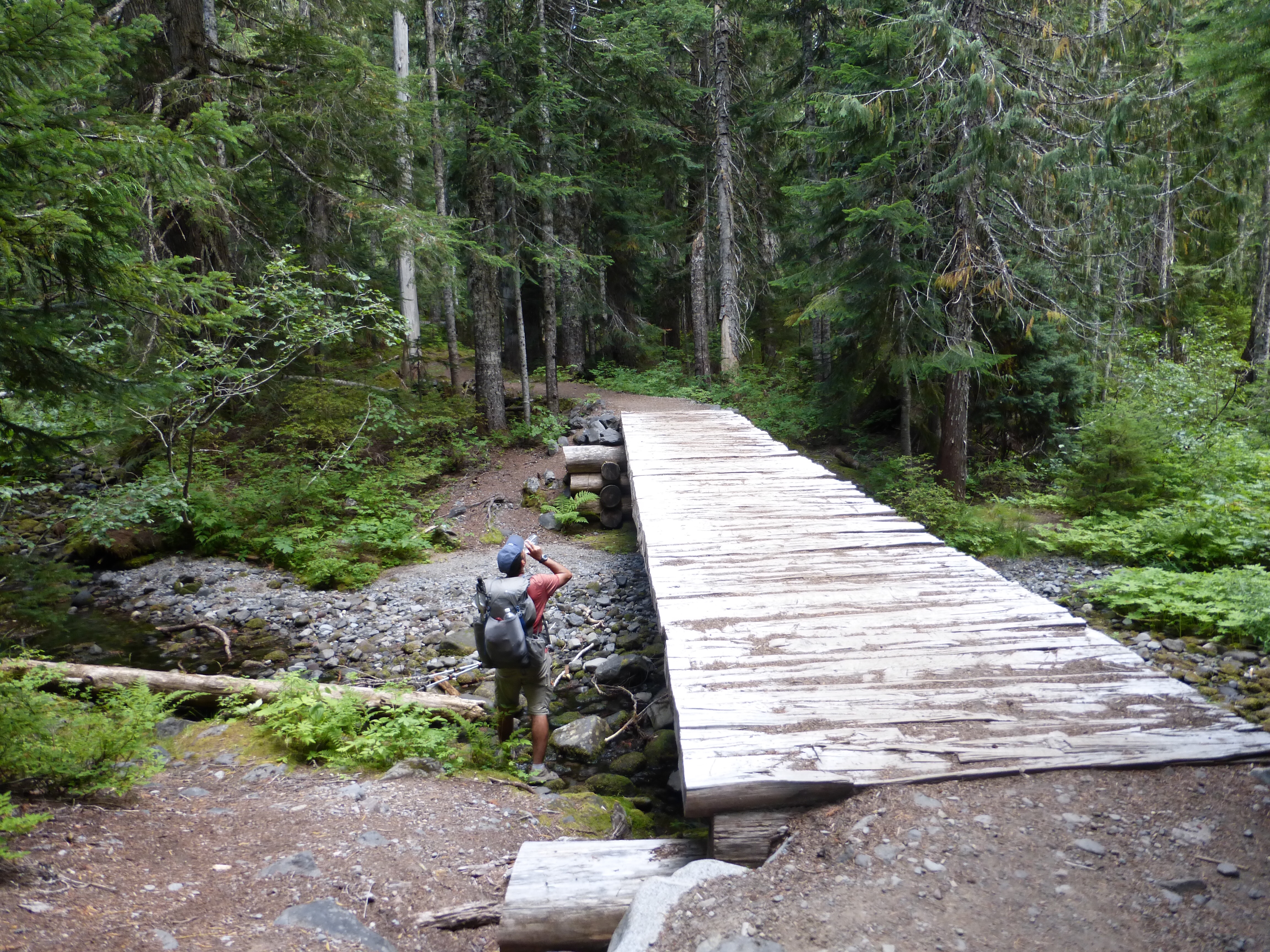 So that’s about it for today. We got to camp at Maple Creek just before 7pm, and since we were off trail the bulk of the day, only saw 14 other backpackers (8 men, 6 women). I do like that, so far, we’ve been at sites that are quite well spaced from others. Although there are people camped around us, the sites are spaced enough and there is enough brush that it feels like no one else is around. 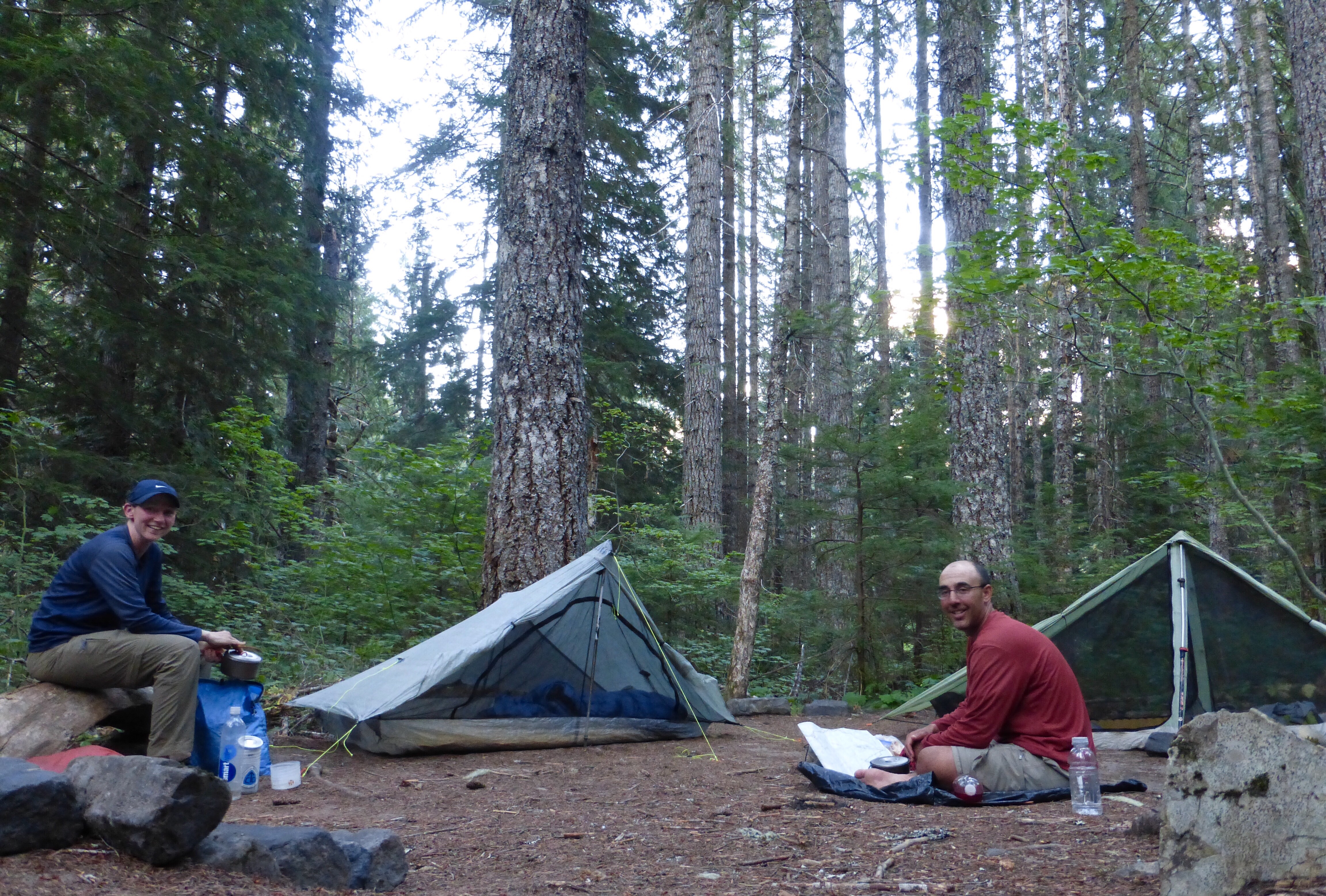 Tomorrow, we have a crazy short day of 3mi to our next camp, but no worries. We packed in plenty of food and watch many of the same shows. Yep, it’s going to be an on trail day of totally vegging out!