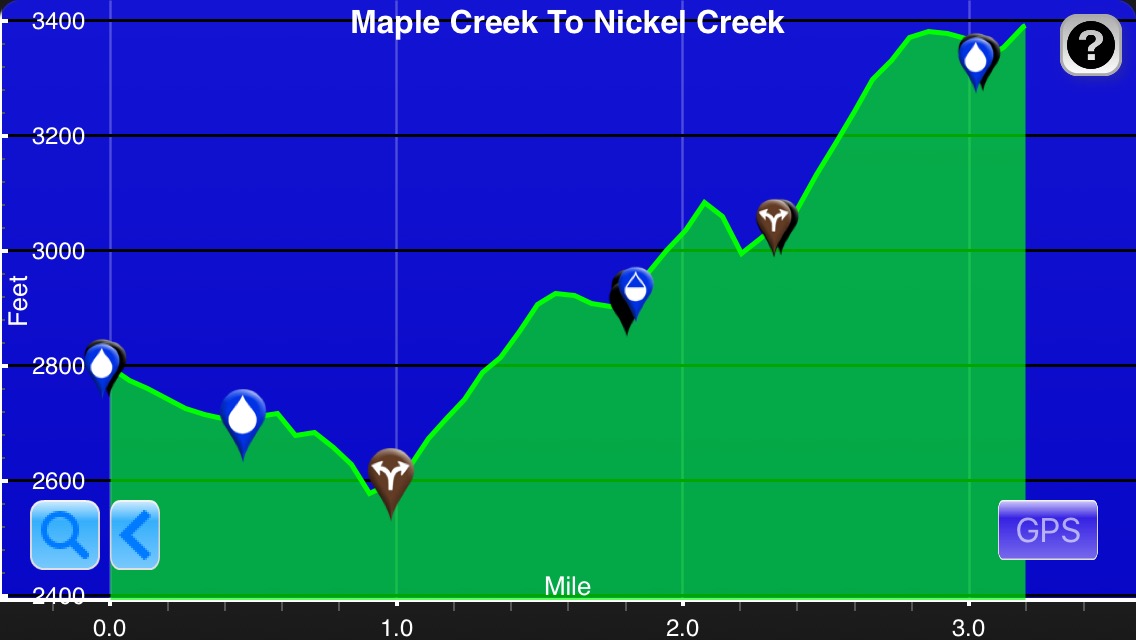 Elevation chart courtesy of the Wonderland Trail app from Guthook and Tami Asars.

This.Is.The.Life! The way permitting worked out, the only campsite available for us today was the next campsite 3.2mi away. I need more days like today. It was pretty much forced relaxation. Since we had nowhere to be, we slept in and lounged at our campsite until noon. It was pretty darn glorious. We both watch many of the same shows, and both recently finished the first season of UnReal. We had a marathon viewing of season two today with two episodes this morning and three more later in the day. 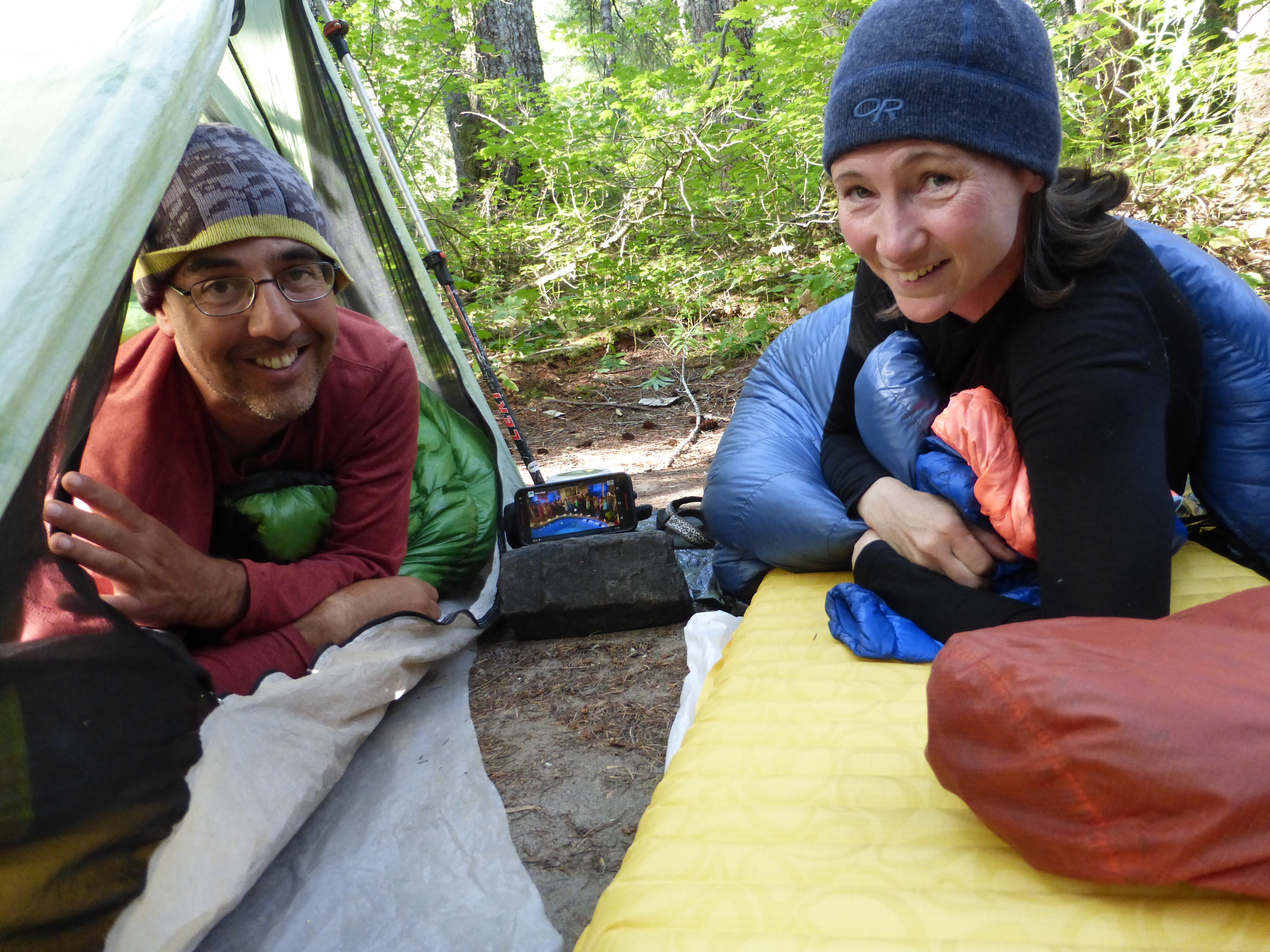 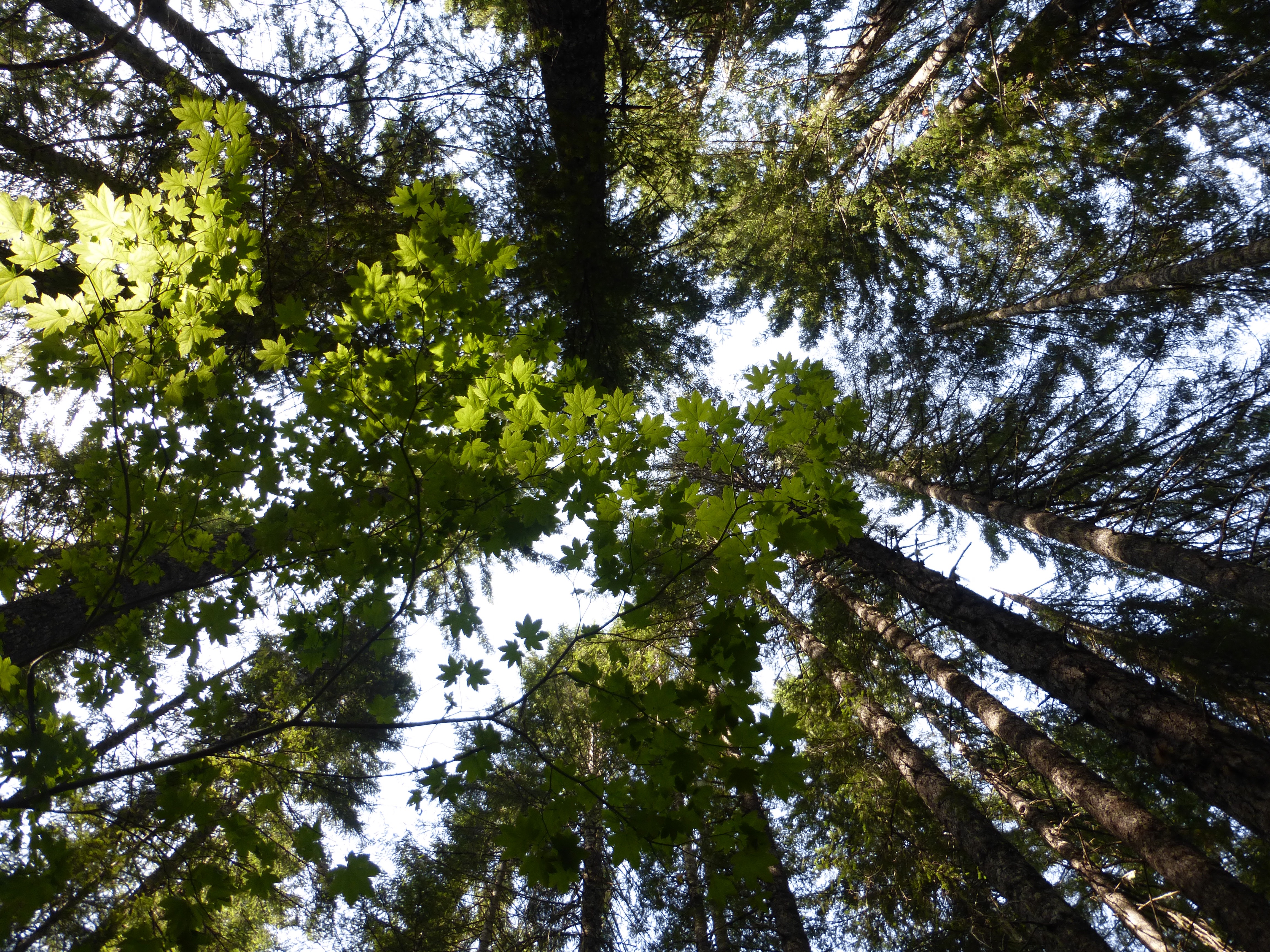 Love this view while laying down under the trees.

Around 11am, we packed up and had our first lunch and then hiked out for our big three mile day. We crossed a major road and trailhead and considered hitching out to do more in the park, but both of us were in the mood to just veg out. We’ve both been hiking quite a bit this summer and having a free day was really welcomed. The few miles between our campsites didn’t have any views really and was pretty much woods with a few water crossings. 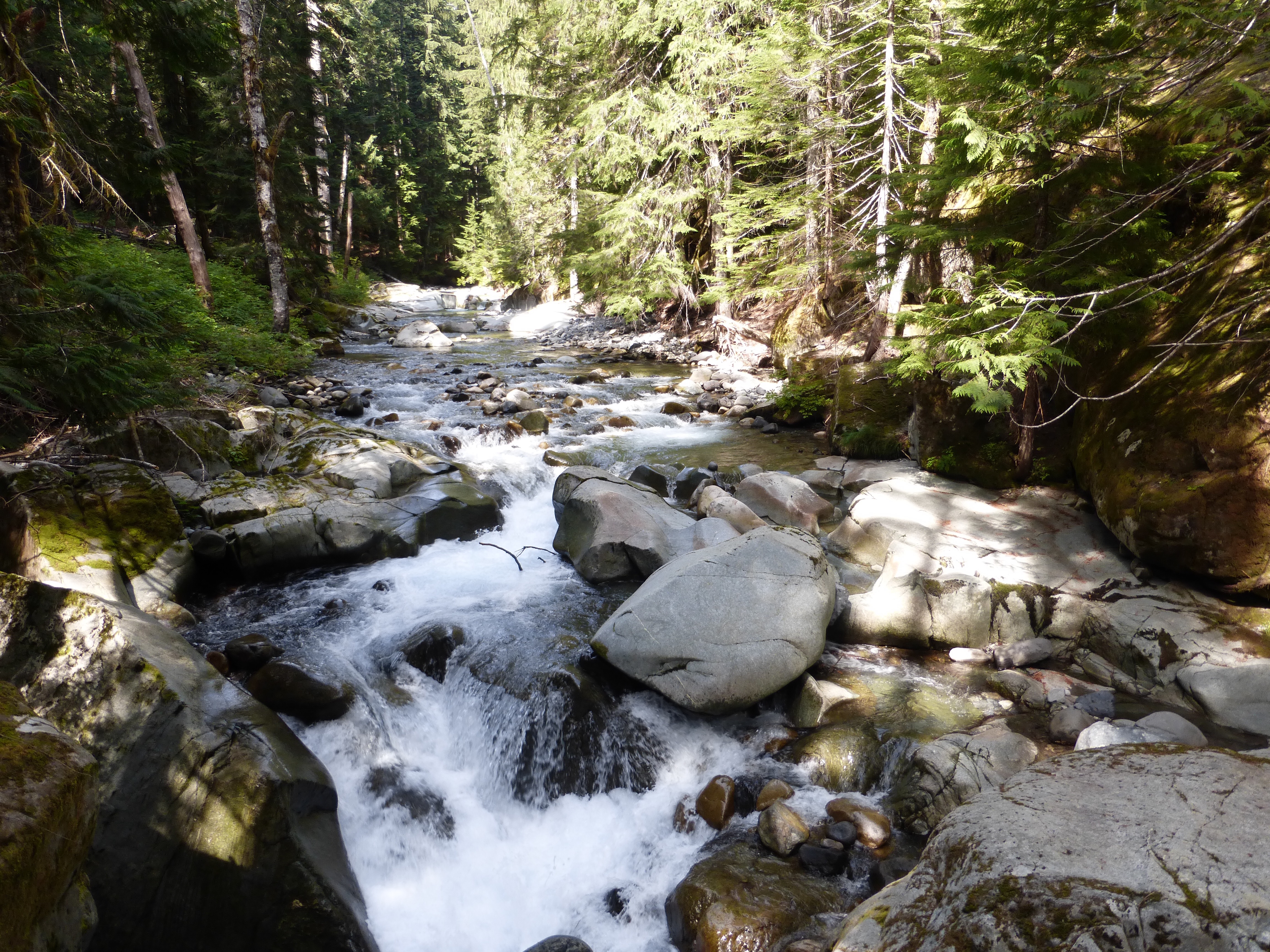 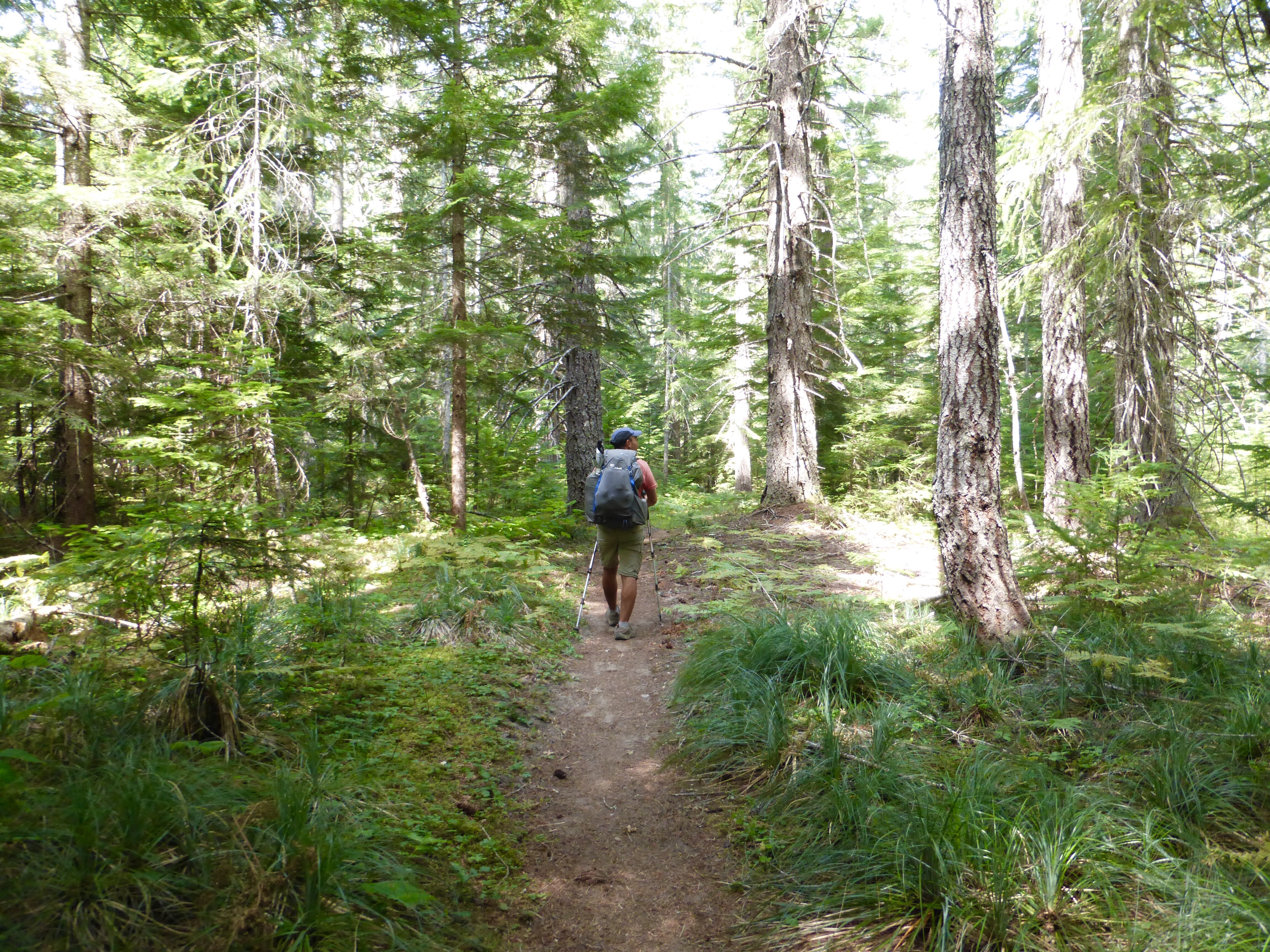 One of the crossings was box canyon, which was a nice narrow gorge, but photos of it just didn’t come out. We made it to the Nickel Creek (I love the musical group Nickel Creek btw!) Camp by 1:30pm and had our second lunch. I found a Knorr Side in the hiker box yesterday and was excited to cook a bonus meal.

The next campsite is 7mi away, and we knew it was a long shot, but I left a note at the camp intersection offering to switch with anyone that was hiking on and wanted to shorten their day. The hope was that someone might have a similar situation with a long day today and a short day tomorrow that they’d like to even out. We’ve ran into many other hikers that also got random short days and figured it was worth trying.

After being in camp an hour or so, a ranger came by that found our note. Bad news was that hikers aren’t allowed to trade campsites, which we honestly didn’t know. The good news is that the ranger was really enjoyable, and we all talked for quite a bit, and exchanged information. So, no trading campsites, but possibly a new friend, I’ll take it!

We lounged the rest of the day and watched three more episodes of UnReal. Buck-30 likes to read and has a Kindle, so he enjoyed that. We both acknowledged that it was good to have a day off away from Internet. If we could get online, we both have a ton of things to get done. Just like me, Buck-30 has a ton more hiking ahead and logistics to figure out. He is going to do the Bigfoot Trail in California after this. Since we are disconnected, we can just let all that go and truly relax. 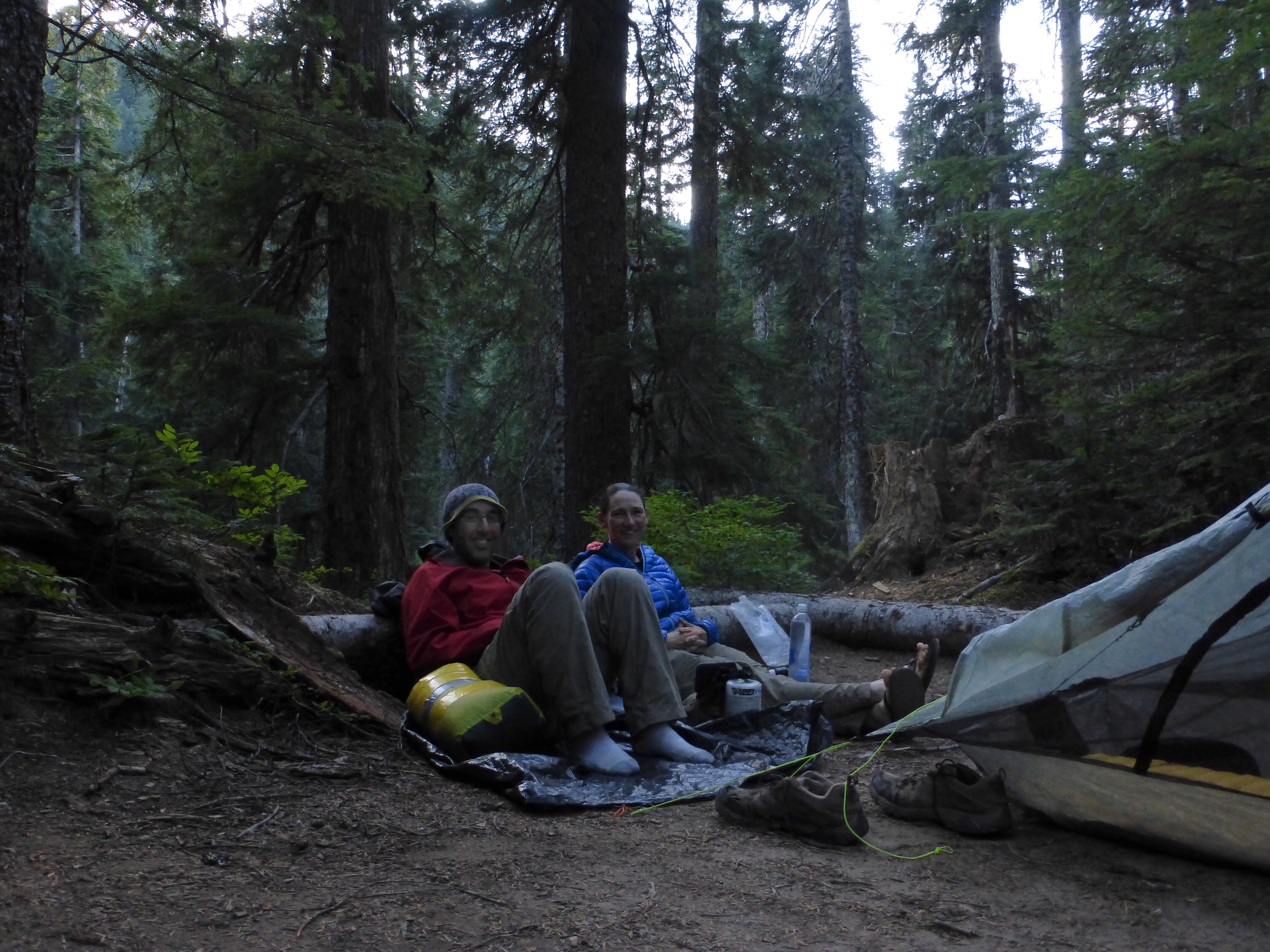 I played with the Guthook app and learned how to use some of this year’s new features. You can draw a route or section along the track on the app, and it automatically gives you the overall elevation profile and total elevation gained and loss. It is perfect for my daily summaries, so I had fun going back and making profiles for all of our days since we know our campsites. I’m pretty excited about this feature because I have fun seeing a visual of the day and it’s fun to see the numbers on the elevation. Man, I wish I had that this summer for high routes I did! What’s more exciting is that Guthook should have a TeAraroa app by the time I head to New Zealand in November, so I’ll be able to have the visual of the elevation charts at the start of the blog entries, yay! 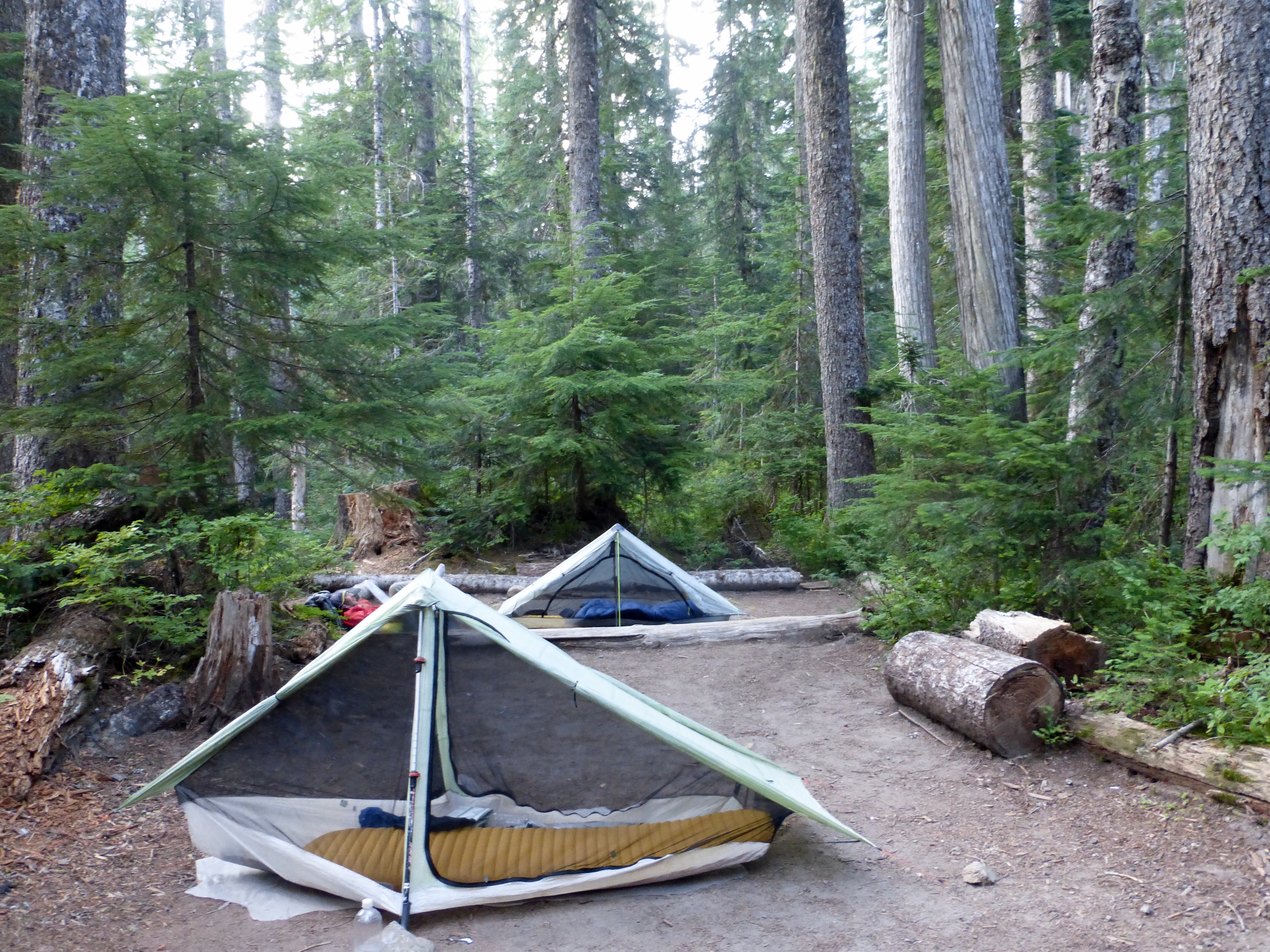 Spacious Nickel Creek Group campsite, which we were assigned to since it was the last site available.

One odd thing did happen around 8:10pm, just as we were getting in our tents for the night. Two guys came suddenly into our camping area and asked to setup right up against our tents. The permit system is setup so everyone has their own site and we told them we were headed to bed and we’d rather not (there were unofficial sites nearby). The odd thing is that they were using a pretty testosterone-like aggressive approach and they acted like we were the rude ones for saying no when they were barging in after 8pm to our reserved site. We haven’t come across anyone at all like this and it was odd and uncomfortable, but they left just as forcefully as they arrived and it all happened really fast.

Tomorrow, it’s back to hiking. In fact, it’s a fairly big day with lots of elevation, so we’re setting the alarm for a 6am leave time, ack! Our bodies are either going to be full of energy or all out of whack after lounging all day. I’m not tired at all, but I know I need to sleep with the alarm set for just after 5am. This will be interesting…