Today was resupply day! This route would take most people at least 12 days to complete and midway resupply is doable, but it’s a matter of what your strategy preference is. Onion Valley is closest hiking-wise off the route if you want to hitch to Independence or have someone hike in a resupply to you. This hike goes in the shape of a backwards “C”. I’ve drawn a diagram to explain it better. 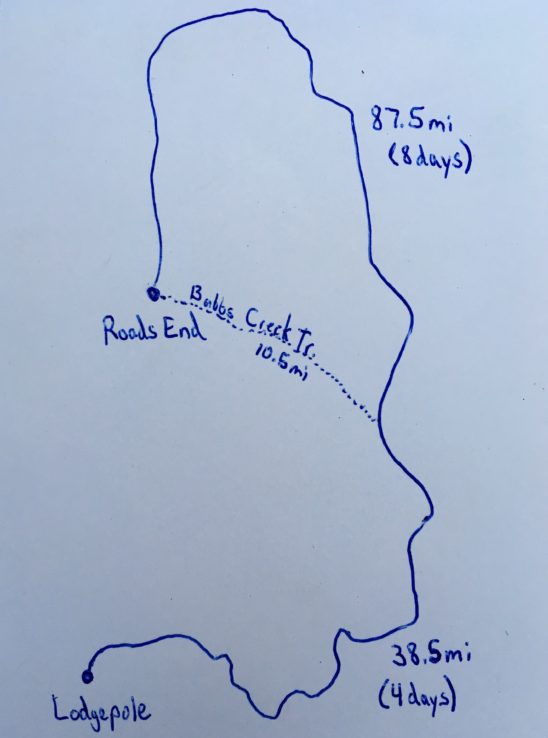 We start at Lodgepole and end a Roads End. Roads End is coincidentally the same place that I started this whole summer at the start of the Sierra High Route. We realized that partway through our hike, we’d be parallel to Roads End and we could do a side trail 10.5mi down the Bubbs Creek Trail to get back to the car at Roads End and resupply out of what we had in the car. Well, the original plan was to throw the resupply in a bear box, but the ranger surprisingly told us the car was fine since the bears here aren’t like “Yosemite” bears.

So that brings us to today. We had two miles on the route and then 10.5mi on the Bubbs Creek trail. E and I have different routines and like solo hiking on trails, so we hiked this stretch solo and met at the end. I left camp a bit before E.

The Bubbs Creek Trail was enjoyable. It follows Bubbs Creek all the way down dropping over 3,000ft to Roads End. There were many nice camping spots with tents setup as I hiked through and most were still asleep. It was nippy hiking down that canyon and I almost had to put my down jacket back on.

I loved cruising down in the cool air and wooded trail with the sound of the creek. I listened to my music much of the way and made it down by 10:30am. Not bad to get 12.5mi in by 10:30am. The route stuff does have me a bit pent up and it was great to stretch my legs for an extended period and cruise with a light pack. It’s going to be quite the haul back up.

When I made it down, I was changing into my flip flops by the car when a woman walked up. I did a double take when I noticed it was Virginia who I had visited in Big Sur before I started this summer. Virginia!! I knew she and David were going to be doing a trip along the SHR from this trailhead (they did the SHR last summer and missed this piece when they did a longer extension called the Southern SHR), but we were all bummed that we’d probably miss overlapping by about 8hrs tomorrow when they originally planned to leave from Roads End. Well, because of the Big Sur fire, they needed to evacuate (they were moving anyway) and they came early. Perfect timing! It was AWESOME to see Virginia and David!!! I’m excited for their year of hiking to kick off. They will do this SHR section, then the Colorado Trail, and then the Lowest to Highest (Death Valley to Mt Whitney). Then there’s more planned after that for quite an awesome year! They may be writing more on their blog, Unbound Routes, as they go.

With David and Virginia at Copper Creek trailhead, southern terminus of the SHR.

While waiting for E to arrive, I was walking through the parking lot when a car driving by stopped. The people in the backseat rolled down their window and asked if I was Wired. Getting recognized in random remote places still throws me, but it’s really cool how in one remote parking lot, there is a community of hikers.

E made it down and we hung out with David and Virginia for a bit before parting ways. We headed just a few minutes down the road to Cedar Grove Lodge, where we were able to shower, do laundry, and even bum some weak wifi off the lodge (which is for hotel guests only, but where there’s wifi and Wired, there’s a way!). I found out my visa for New Zealand (starting in November) came through, yippee! Anyone have a contact in Auckland wanting to host me when I arrive??

These resupply days always go by too fast. I was able to catch up on the blog, but the wifi was too weak to post anything. We went over our next leg and it should take 7 nights. Weather looks great, but there are a couple major obstacles on the remaining part of the route that that could either detour us or turn us around completely. It is a bit daunting and intimidating, but we won’t know until we walk up to it and see for ourselves. We are bringing a bit more food just in case.
We are at the Sentinel campground for the night. E gets to sleep in her car. Temps are perfect for sleeping! I totally forgot to get a camp shot until the morning after I already packed up, so here’s one of what it looked like at the campground.

Tomorrow, our goal is just to hike back up about 12mi, so we are going to sleep in and get a leisurely start. It’s been a nice little break here. I just wish I had more time to watch a couple shows! Oh well, at least the blogging “tentwork” is done.