I woke up startled around 11pm. The wind had picked up a bit and the smell of a forest fire was strong. It scared me with how thick the smell was. It was like I was sitting near a campfire. I contemplated waking Rockin’ and Why Not. I looked outside and saw a sky full of stars and thin clouds and felt better. I still had trouble falling back asleep with thoughts of how I could suffer and die out here in smoke and fire.

It was warmer than expected overnight, and maybe that was because of the fire. We had a big day (for us) and got over three passes. Our first task of the day was to get up about 800ft to Raid Peak Pass (11,240ft), which we could see from our campsite. It was a really nice walk up and my type of pass. Not too steep and terrain that I could move well on.

Looking back as we hike up.

Final stretch to the top.

Once on top, I got really good service and was able to get a photo up on Instagram and Facebook and I got to Skype with my nephews and show them where I was. That’s always a lot of fun when I’m able to get service to Skype and show them something that is mountainous. This was the best screenshot I could get of my sister and all the boys that had them all and wasn’t blurred in some way. Quite the accomplishment! 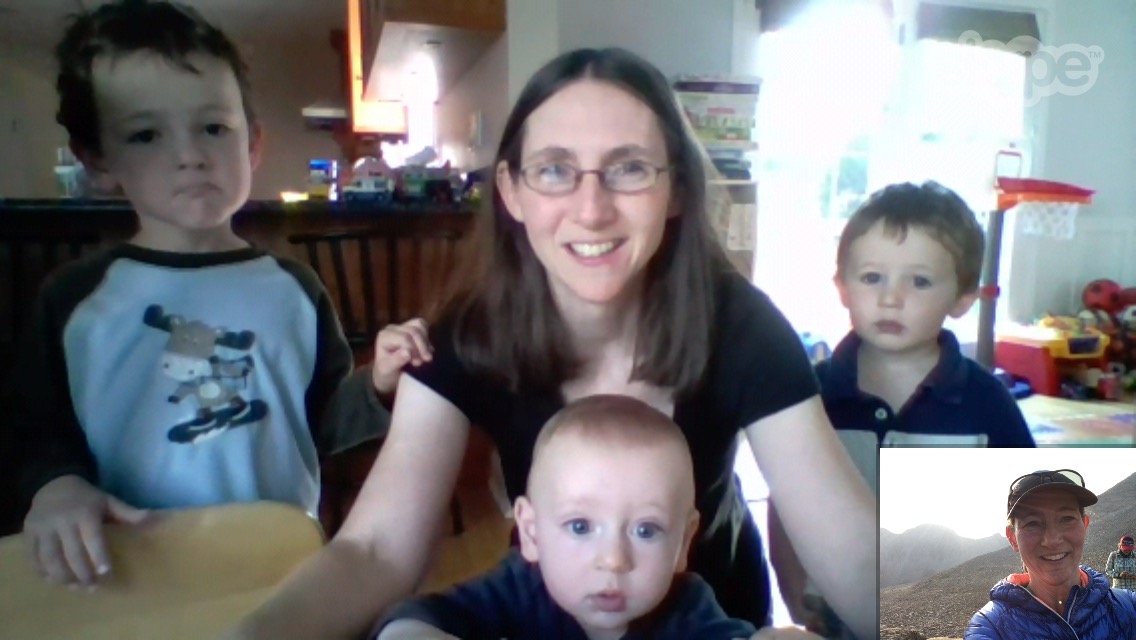 Skyping my twin and nephews.

Unfortunately, it was really hazy all day today due to the fire, which we looked up while we had service and it’s still fine to be out hiking. There were a couple fires that we knew about even before we left, but they aren’t exactly along our route. There was a thick haze and it smelled like a campfire all day.

Both Skurka and Dixon/Wilson’s routes go over this pass, but they have different options for going down. D&W have a class 2 descent and Skurka’s has a quicker route with a short bit of class 3. We took the class 3 route and enjoyed it.

Next up, was a brief drop down to Bonneville Lake and then Sentry Pass. The lake was so calm that from a distance, the reflection looked like an odd optical illusion of a dip in the terrain rather than a lake. It wasn’t til we got closer that we realized it was a lake.

Bonneville Lake with Sentry Peak Pass, the dip on the center right.

Sentry Peak Pass (11,400ft) was also a nice fun one. I’m enjoying these passes. They aren’t too steep and the terrain with a mix of boulders, grass, and rock slabs allows for good pacing. In the distance we saw a large group gathered and we saw two people climbing Sentry Peak Pass when we got to the top of the pass.

From the top of Sentry Peak Pass we could see most of our day of travel ahead to Photo Pass. It was quite hazy from the fire and the camera had trouble focusing on it, but it’s the dip right in the center.

Photo Pass in the distance through the haze.

It was over four miles to Photo Pass and it was a mix of terrain. Once out of rock and snow, we dropped down toward Lee Lake and Middle Fork Lake where there were willows to weave around and elk trails were helpful. Between the lakes, we walked in a quaint area along a small stream and had lunch.

After lunch, we headed up the very steep willow covered ascent to a lake below Photo Pass. We met one solo hiker out backpacking for over a month in the Winds that knew our blogs, and saw some people in the distance along the lake that we didn’t overlap with. We’ve yet to cross paths with anyone doing a high route, but it is still a bit early season as many seem to go in August.

Steep climb toward Photo Pass from Bewmark Lake through the willows.

For those interested in route comparisons, note that this steep climb away from Bewmark Lake is also where the route separates from the Dixon/Wilson route until midday tomorrow.

Photo Pass (11,400ft) was a walk up with a trail and was straightforward. The north side was quite a steep descent (still on a trail). It had a thin layer of dirt and small gravel on rock that is like walking on ball bearings. Not my favorite terrain to walk (or semi-controlled slide) on. 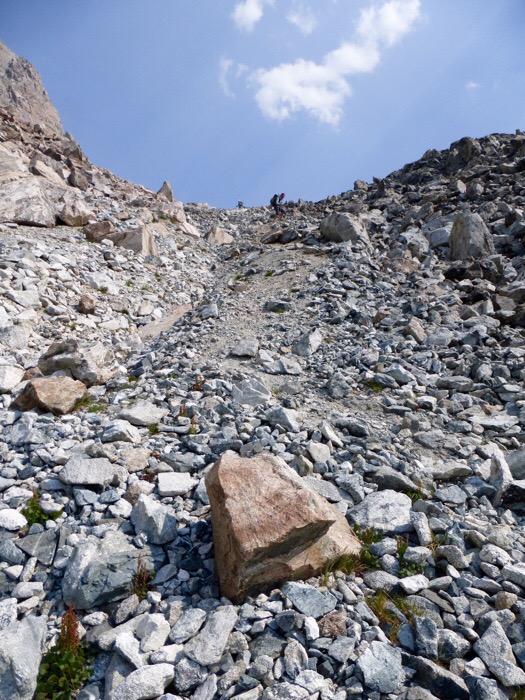 Rockin’ & Why Not on the very steep descent off Photo Pass.

From there we dropped down to a valley again, and it was cross country walking along a stream and then through a forested area. Definitely not the most scenic place to be, but it was really remote and we immediately had our eyes peeled for wildlife. We had two big sightings that were so quick none of us could photograph them. While in the valley along the stream, we saw a really big black bear far in the distance up a hill. He scampered away really fast, but that’s definitely the biggest bear any of us have seen and he was really black. Very impressive. While we were in the dense woods, we turned a corner to a small meadow area and a huge elk was right there by the stream. With how large he was and the huge rack he had, I thought he was a moose. He ran off almost immediately. It was really cool to see both, but sorry, no photos.

We ended the night emerging from the dense forest to a tarn in a more open area. Each night this trip, we’ve randomly ended right about 7pm. That’s a bit later than usual, but the cooking and eating before camp has pushed it back a bit as well. 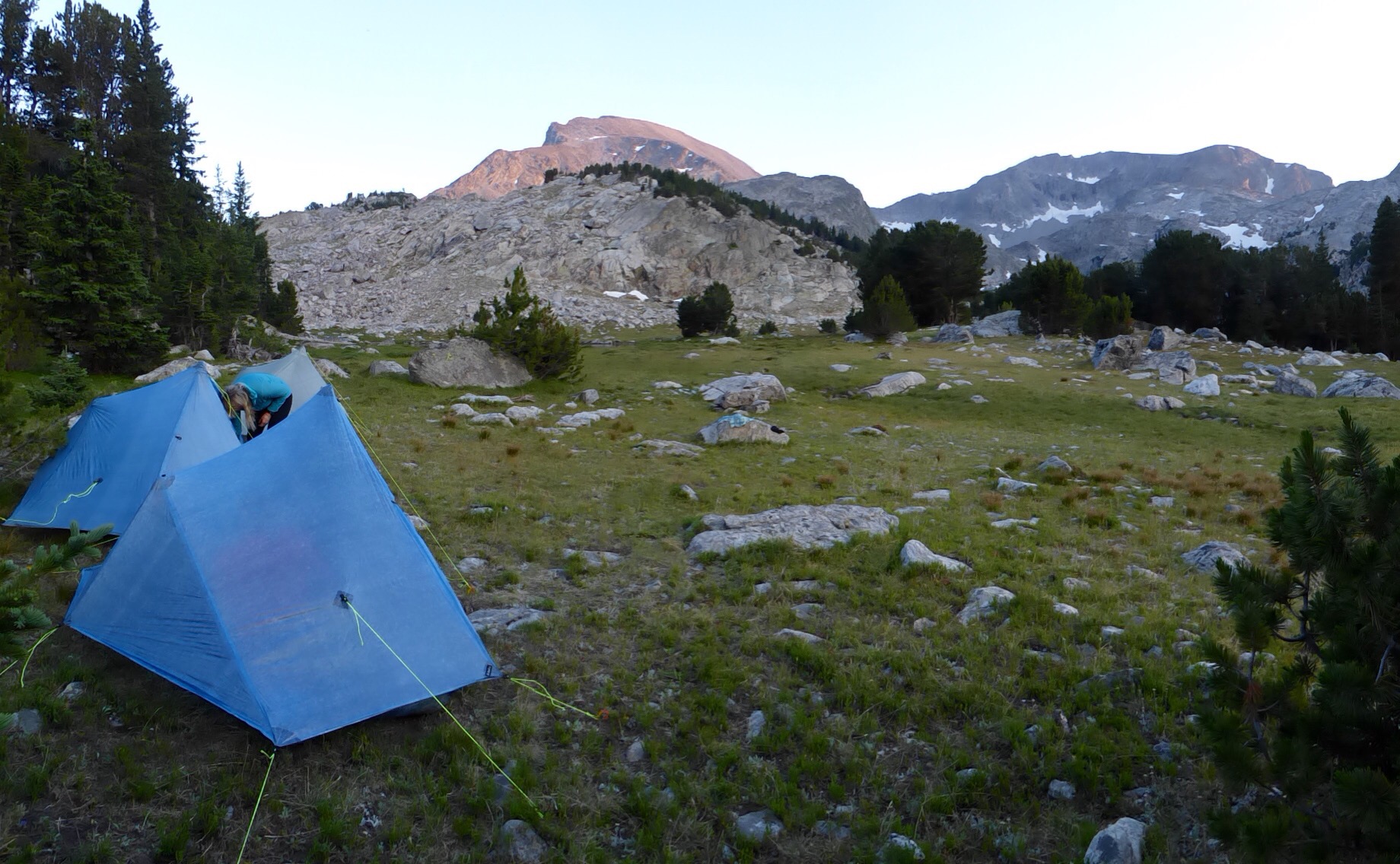 Campsite with a view of the wall we are basically headed up to tomorrow to summit Europe Peak.

As a note, in comparing the routes, none of us have done the part we missed, yet paralleled on the D/W route. We all wonder if it would have been more enjoyable. Yes, the Skurka route is higher and much more remote, but we wonder if the D/W route along the lake would have been just as enjoyable. We weren’t taken with Photo Pass and wonder if it’s worth all the effort. After doing it at the end of the day, we felt possibly unnecessarily drained and that it didn’t add much to the day. We did like a bit of the stream walking later on, but really didn’t enjoy the off trail stuff through the dense woods. It is setting us up to go up on the Divide tomorrow, but we see an easy side trail (Europe Canyon Tr) that would connect the D/W route to Skurka’s and cut out Photo Pass, walking along a stream, and the off trail in the dense woods. Skurka strongly calls the D/W option along Halls Lake “tedious and uninteresting” and refers to it as a “lackluster just-get-me-through it alternate past Halls Lake.” Any thoughts from anyone that’s done Halls Lake from Bewmark Lake to Europe Canyon Trail?
This is our last protected camping for the rest of the hike (except the last 6mi). The rest of the nights will be will be high and exposed to all the elements. So far, we’ve been super lucky with weather, so we hope it continues. It seems the winds like to pick up just as the sun is going down in early evening and late at night it’s been calm, so we hope the winds also stay on the mild side. Also, the sky cleared up a bit tonight, so we are hoping for less haze tomorrow.