Today was my favorite day so far! In fact, it ranks up there with one of my favorites of the summer. We had a route decision to make early this morning and I was more torn than Why Not and Rockin’. The option was to go high up on the divide on Skurka’s route or go low on Dixon/Wilson’s. We’ve been on Skurka’s the whole time, but many people I asked said Europe Canyon (on the D/W route) was wonderful. Doing that meant dropping low to walk along some lakes with mountains towering around us. I find that appealing. Going high also included the option to tag Europe Peak and I’m not a big peak bagger…and still have a bitter taste from our last unnecessary high route summit of Wind River Peak at the beginning of this hike…but I do love the open freedom of walking along the Divide. It makes us all nostalgic for the Continental Divide Trail. We still had a couple miles of off trail ascending to do before we had to make a decision this morning. 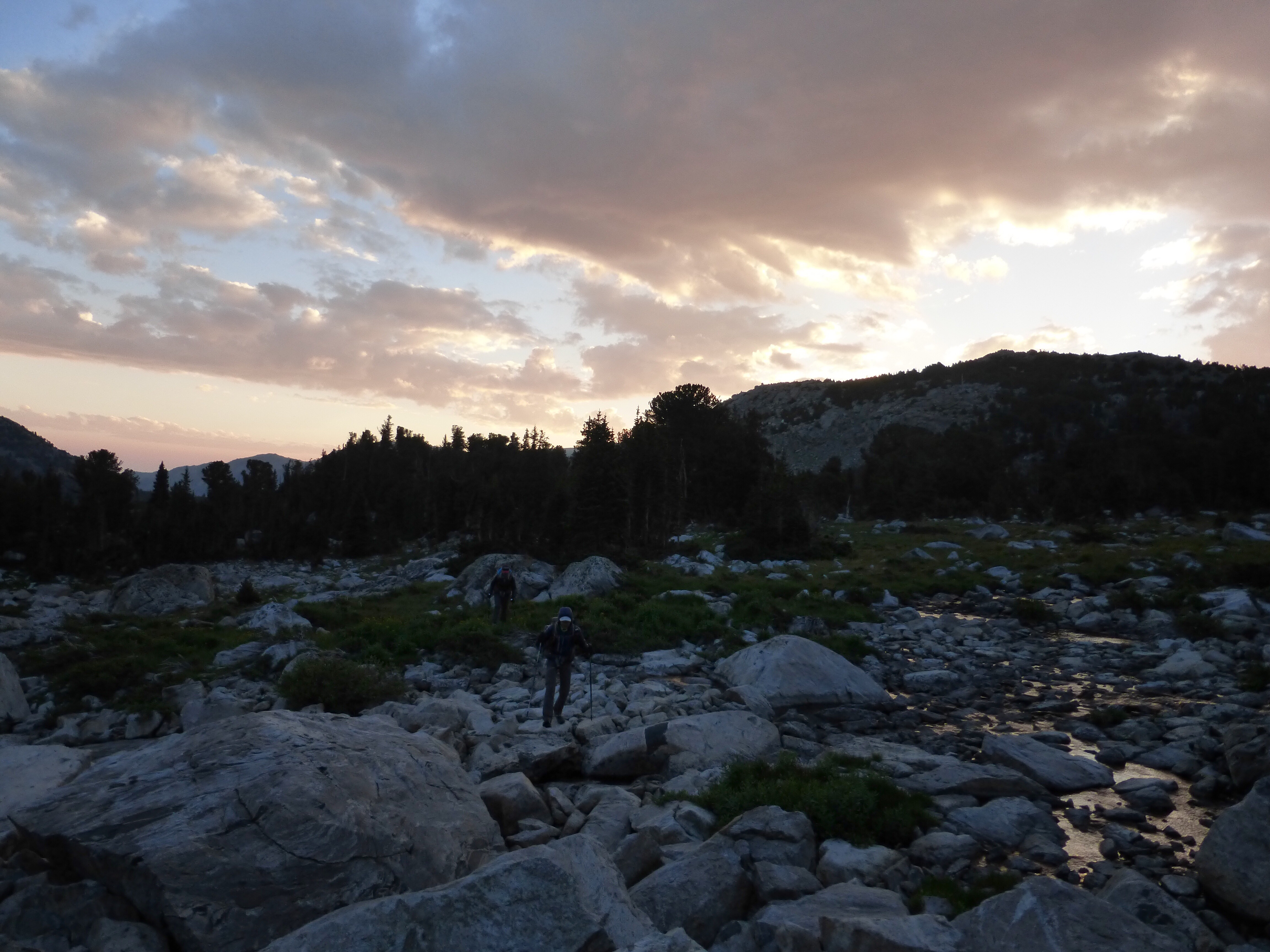 Pink morning sky as an effect of the fires in the Winds.

We headed up the unexpectedly nice wall we needed to ascend to head towards Europe Peak. 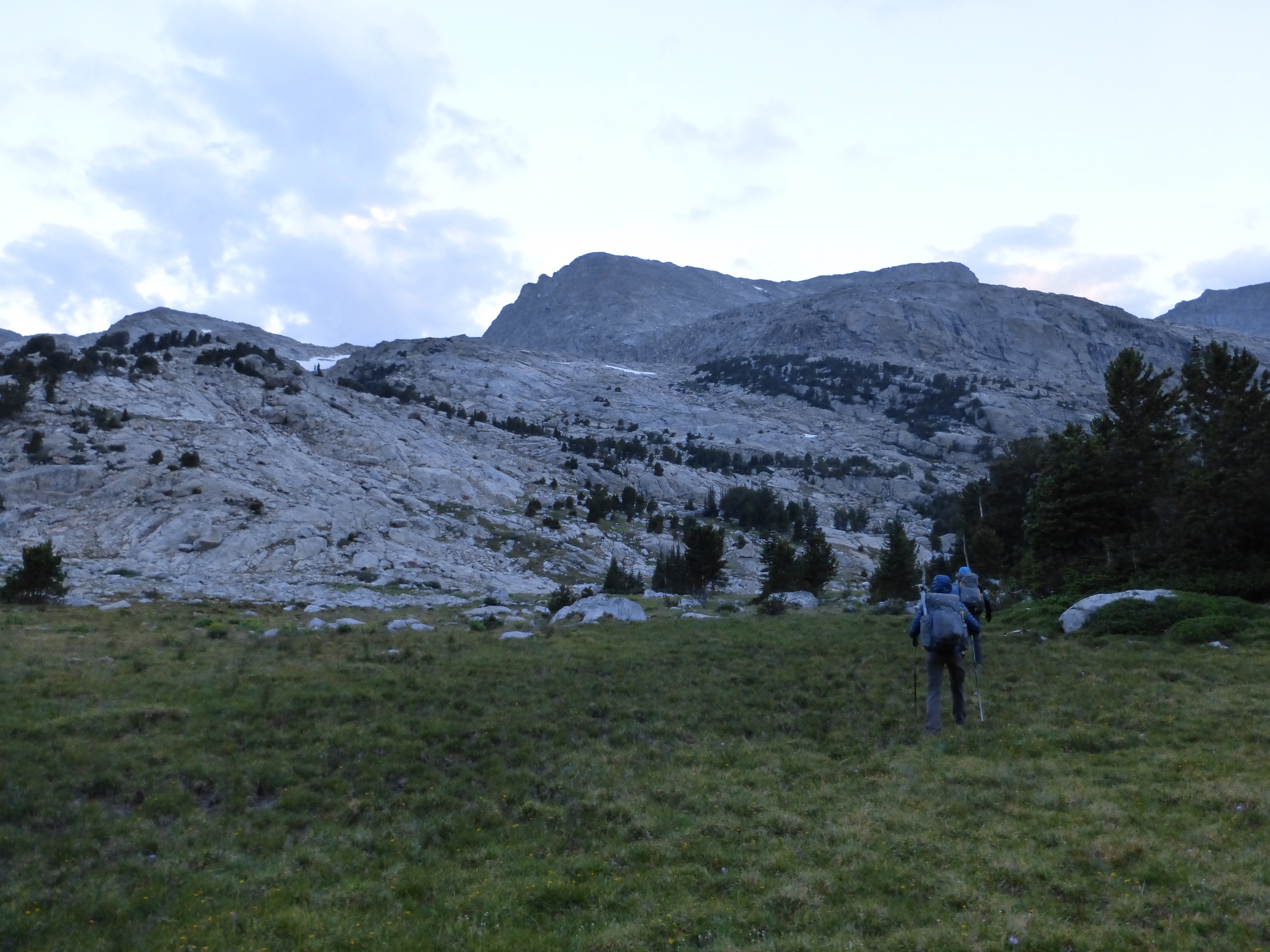 As we headed up, a major landmark was for us to reach a tarn. The haze had blown out for a bit and we got a view of what we all long to see here in the Winds! The mountains with the water reflecting and then a BLUE sky and clouds. That view definitely woke us up this morning in a great way! 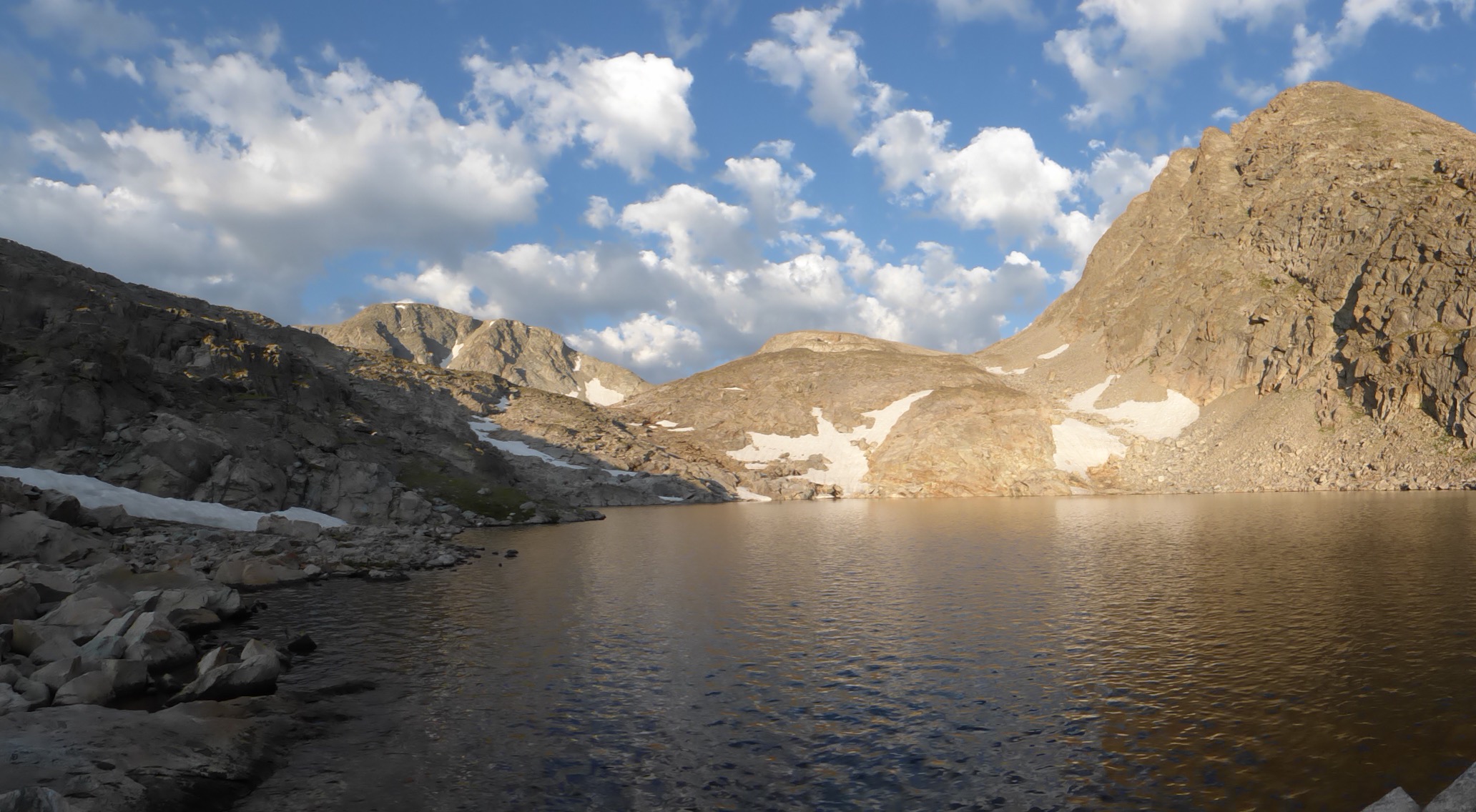 Once we got up a bit further, we were able to see Europe Peak. We got to the trail down to Europe Canyon and the lure of getting up on the Divide was too strong. We headed up to Europe Peak. 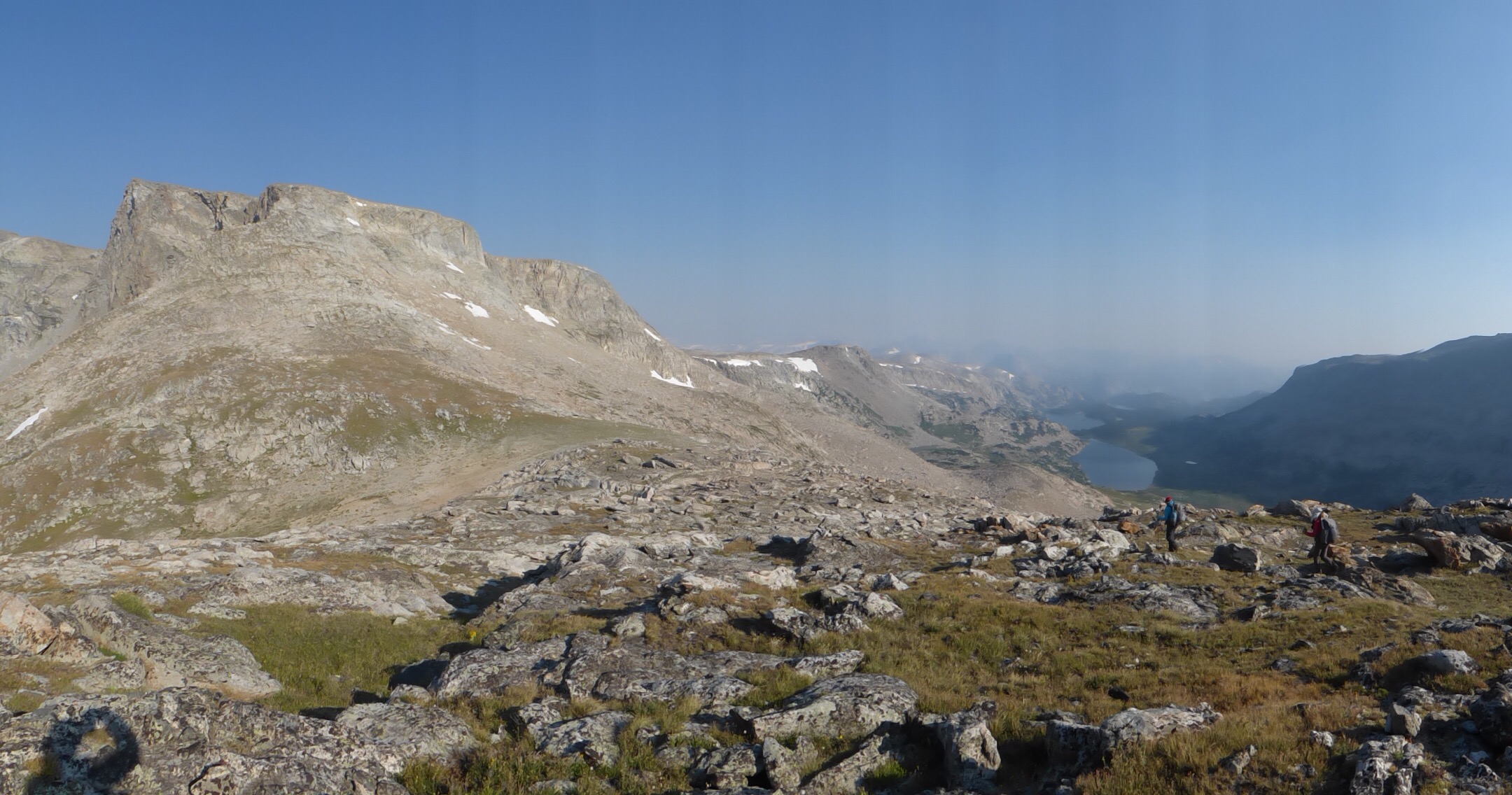 The ascent started off nicely with grassy ramps and ledges, but then things got confusing. Skurka’s notes are to err to the climber’s left and you’ll reach a 15-20ft class 3 slab that leads to a knife edge. His instructions seem to insinuate that you need to go that way, but the waypoint is on the right side. We figured it was important if it was waypointed and described in the guidebook, so we headed across a very angled traverse on a mix of loose rock and thin angled ledges. I was seriously NOT a fan of this as it got more and more sketchy. 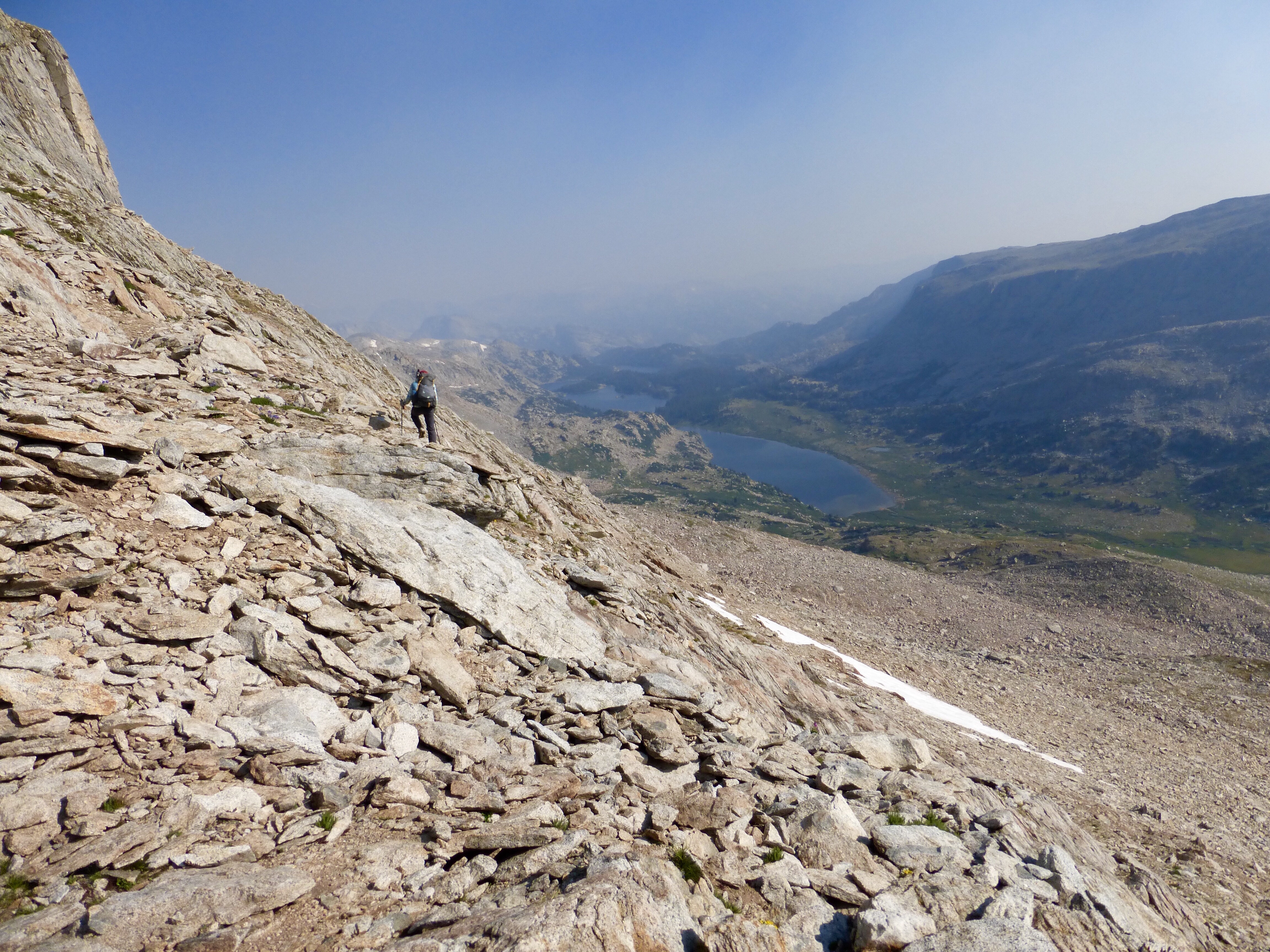 Heading over on loose talus before it got more angled and sketchy.

We all were perplexed as we searched for this noted and waypointed slab we needed to ascend. Was something throwing off the GPS? Weren’t we supposed to stay left? Should we go back to the grassy ramps or is there a reason we don’t know for having a waypoint to pull us away from that? We saw a crack that was more class 3 than I was comfortable with, but we were so frustrated that we just wanted to get up at that point. This stuff is “fun” to Rockin’ and Why Not, but I just wanted it over with. 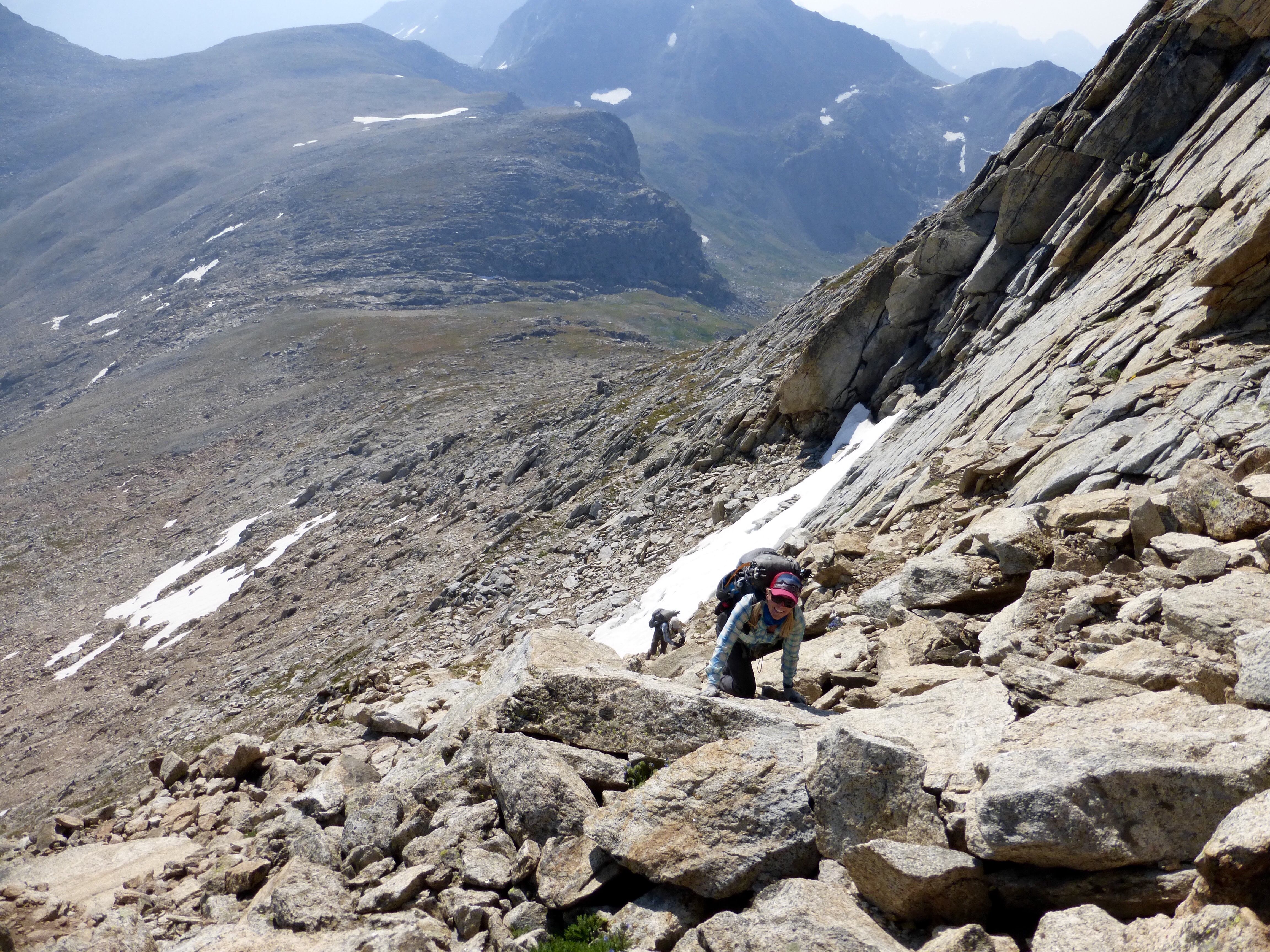 Loose talus crack with handholds we went with. Rockin’ having fun of course.

Heck maybe we were in the place Skurka intended, but we thankfully never came across a knife edge. If we did it again, we’d recommend staying left (ignoring the waypoint) and trying that first, cause our way was no bueno!

After we got up there, the rest of the day was great! It was a 200ft side hike to tag Europe Peak and it was on great stable rocks with no exposure to the top, so that was fun. It was a great view from the top. We could even look down on Europe Canyon and that was fun. We all would like to go through that someday. It’s just as cool to be down there looking up at the huge mountains as it is to be above it. 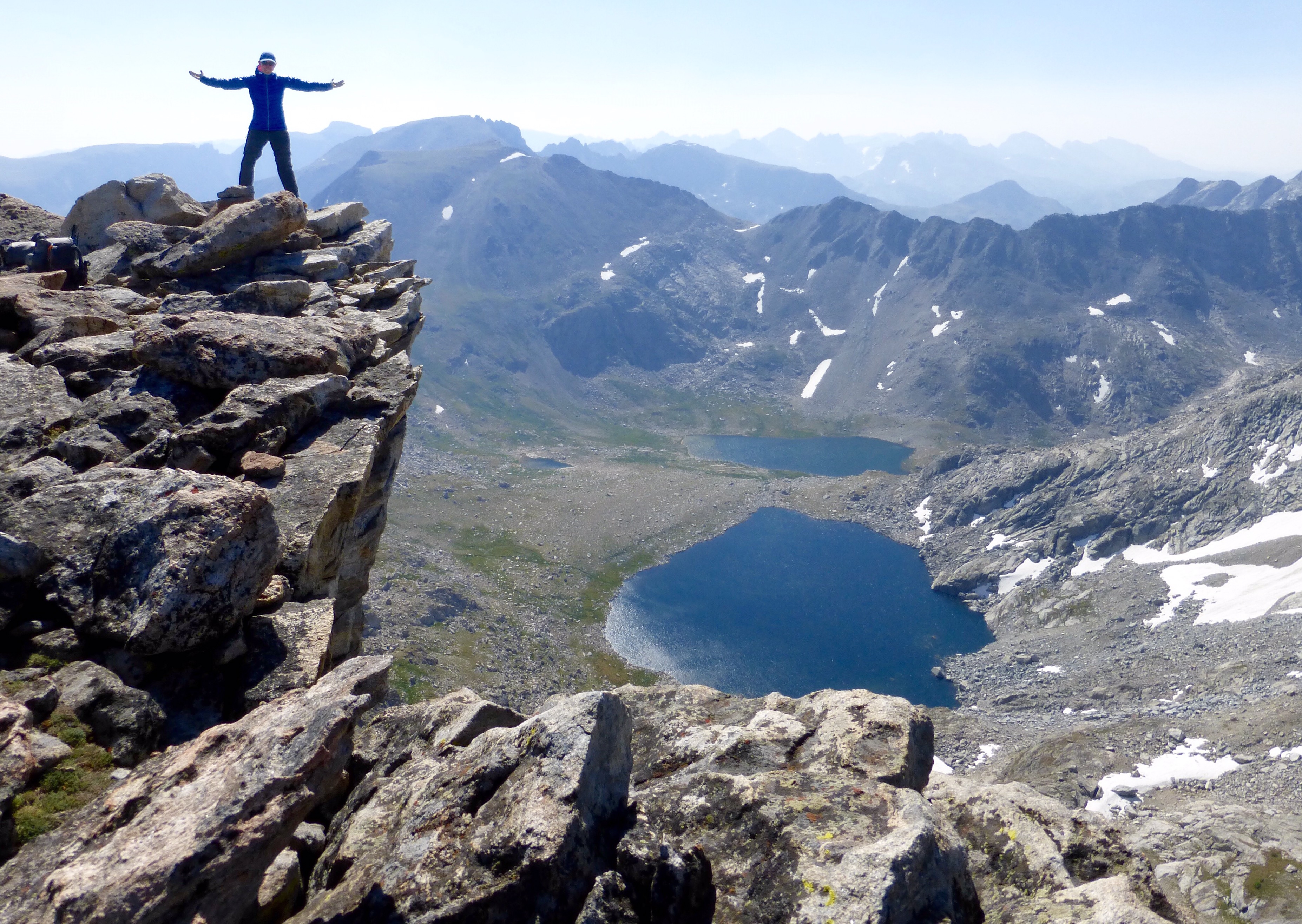 Europe Peak summit (12,259ft) with part of Europe Canyon below.

We spent far too long up there once we noticed we had phone service. With a 10 day trip, we are limiting battery usage, but we all got to load emails, text family/friends, and post some photos to social media. We got our quick fix and headed down to continue along the Continental Divide, and we all absolutely loved it! 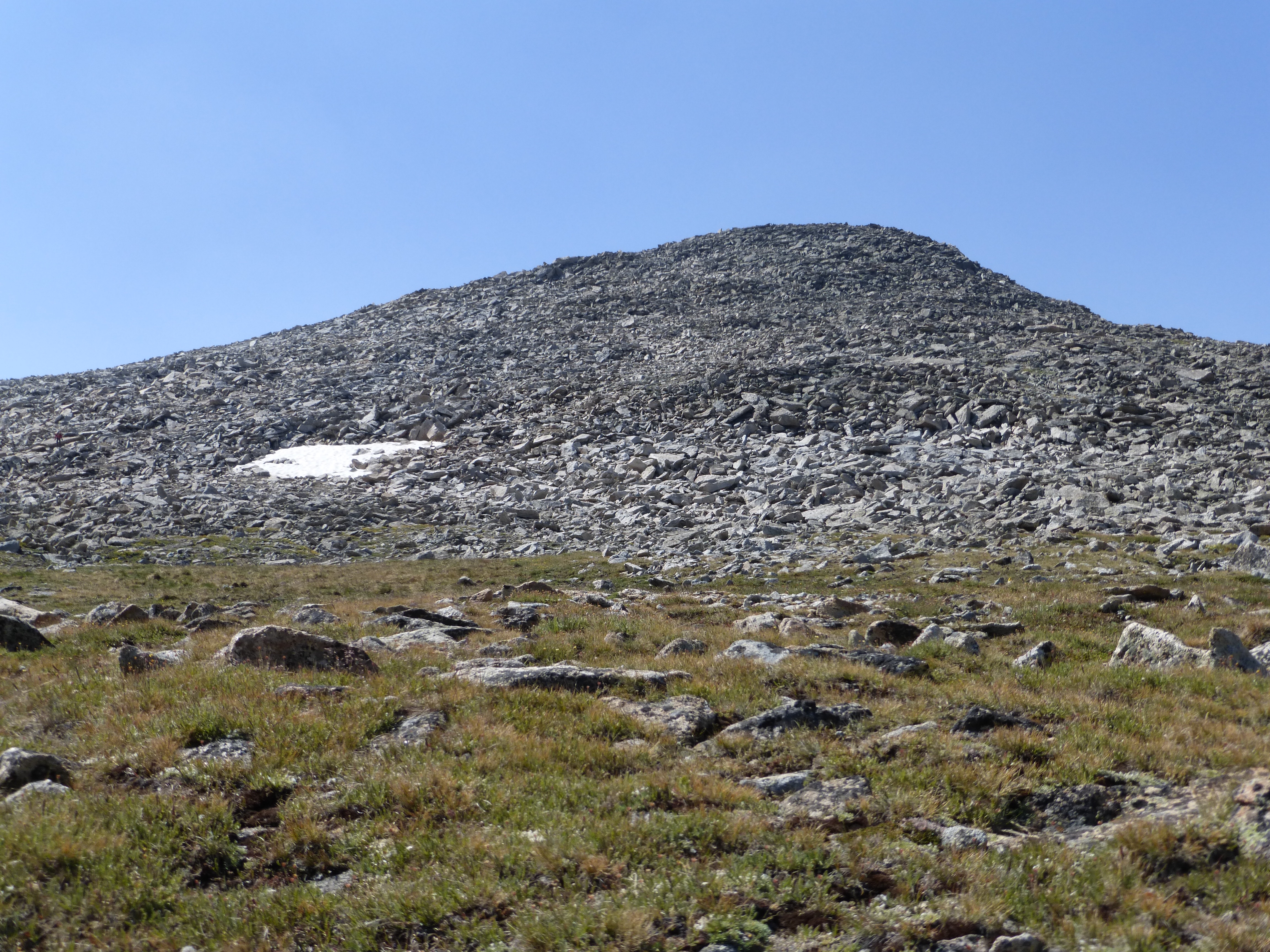 Looking back on the final stretch going up to Europe Peak. See Why Not in the red jacket on the bottom left? 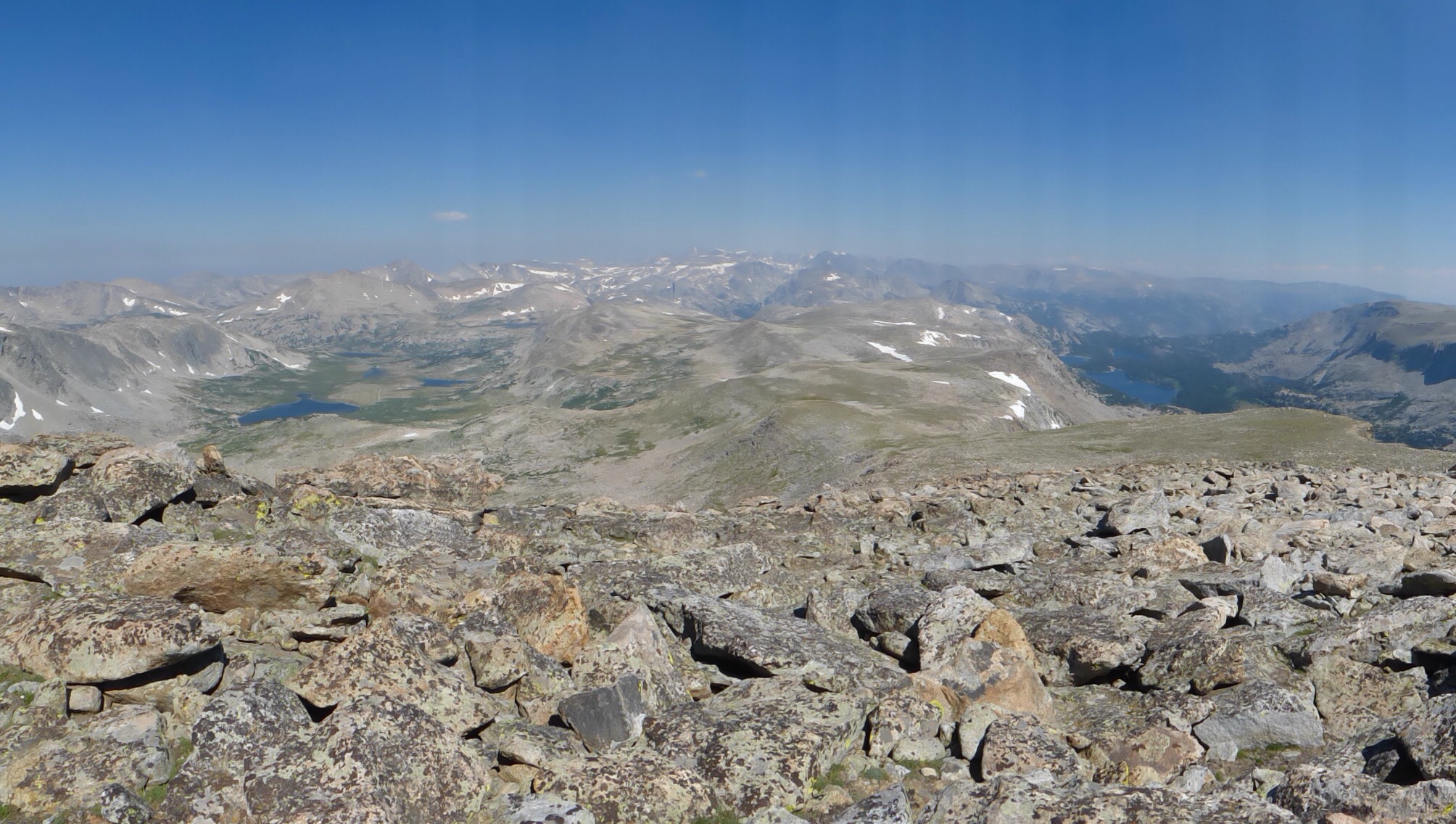 Heading out along the Continental Divide. Still hazy sadly.

The openness and freedom of walking on the Divide with no trail is tough to top. We couldn’t get much happier. Navigation wasn’t in our favor today as we unintentionally took the long way around to our next waypoint (Why Not thought we were choosing wrong and she was right!), which was another tarn, and had lunch. From there we followed a fault line for a mile or two and cruised to the headwaters of a creek that would be our guide down to our next valley. 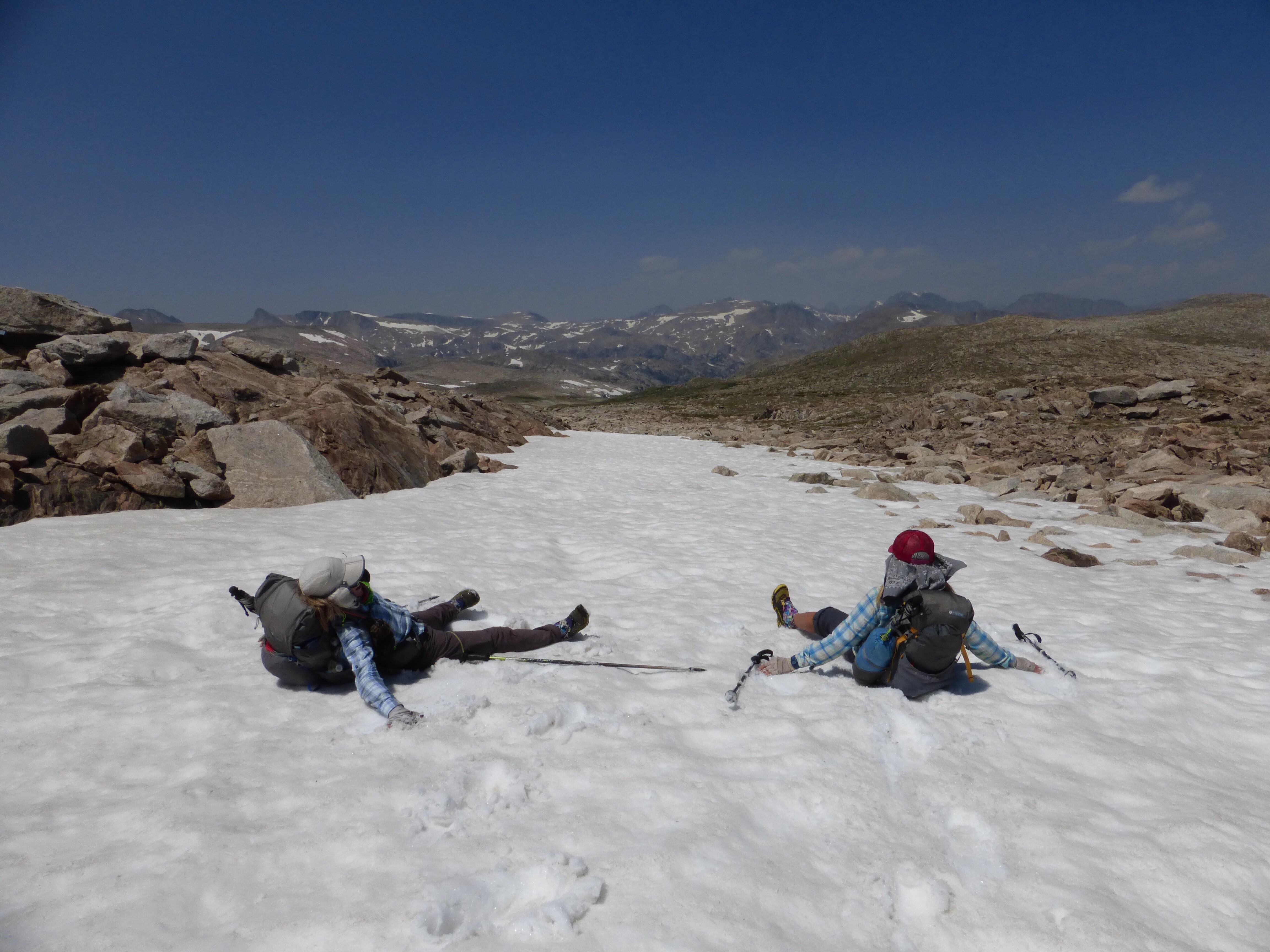 Why Not and Rockin’ with a failed attempt at snow angels with packs on.

As the headwaters grew to a distinct creek, we followed it down to Golden Lakes. In the distance, we could see the dip of our next pass, Douglas Pass. Bummer that it’s so hazy! 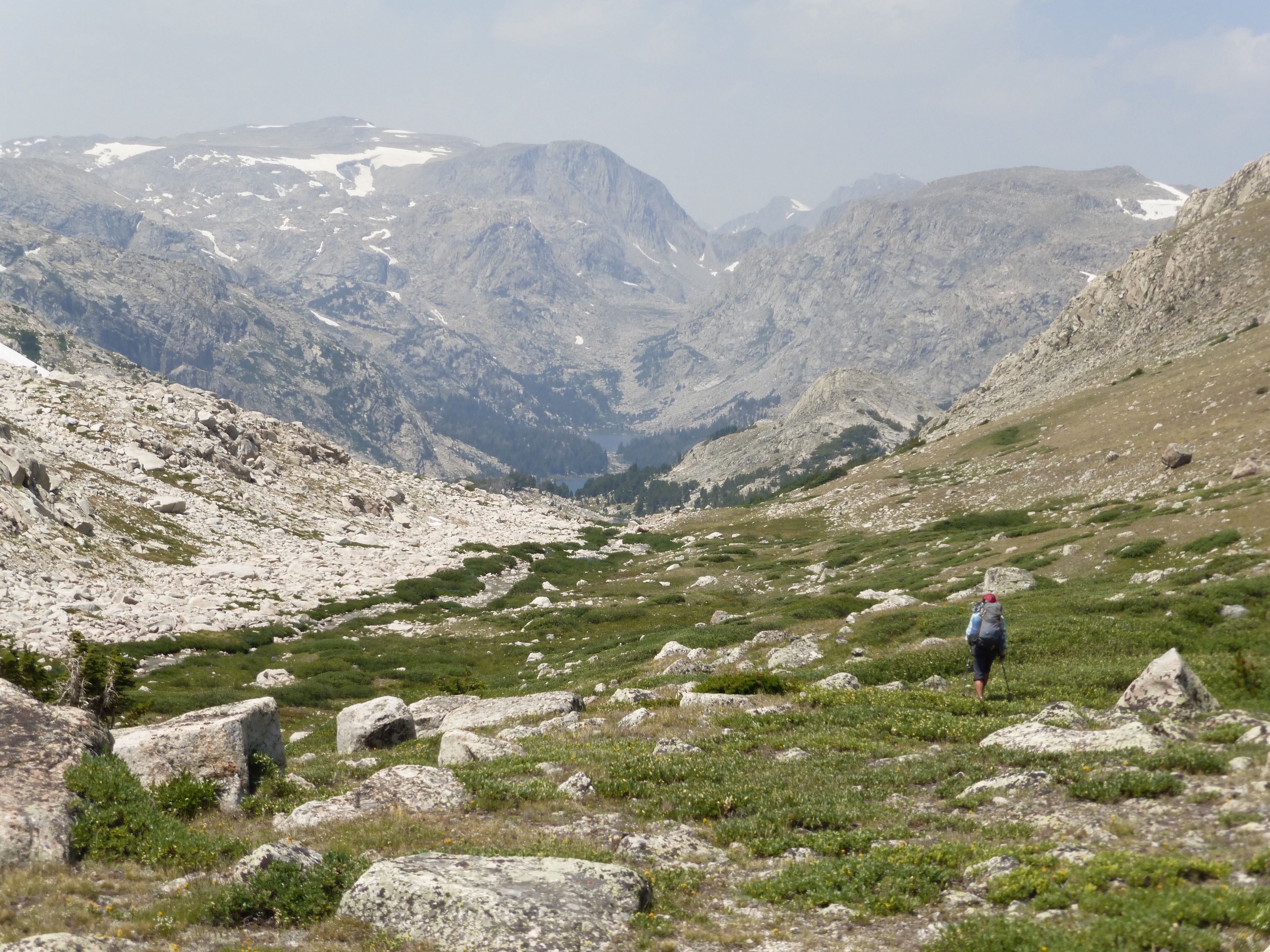 Heading off the Divide down to Golden Lakes.

Once we got down a bit, we had trail the rest of the afternoon, which was nice. It took us along the Golden Lakes. We saw one person all day, someone fishing at one of the lakes. We kept our record of dry feet every day so far on this hike, 6 days in a row! 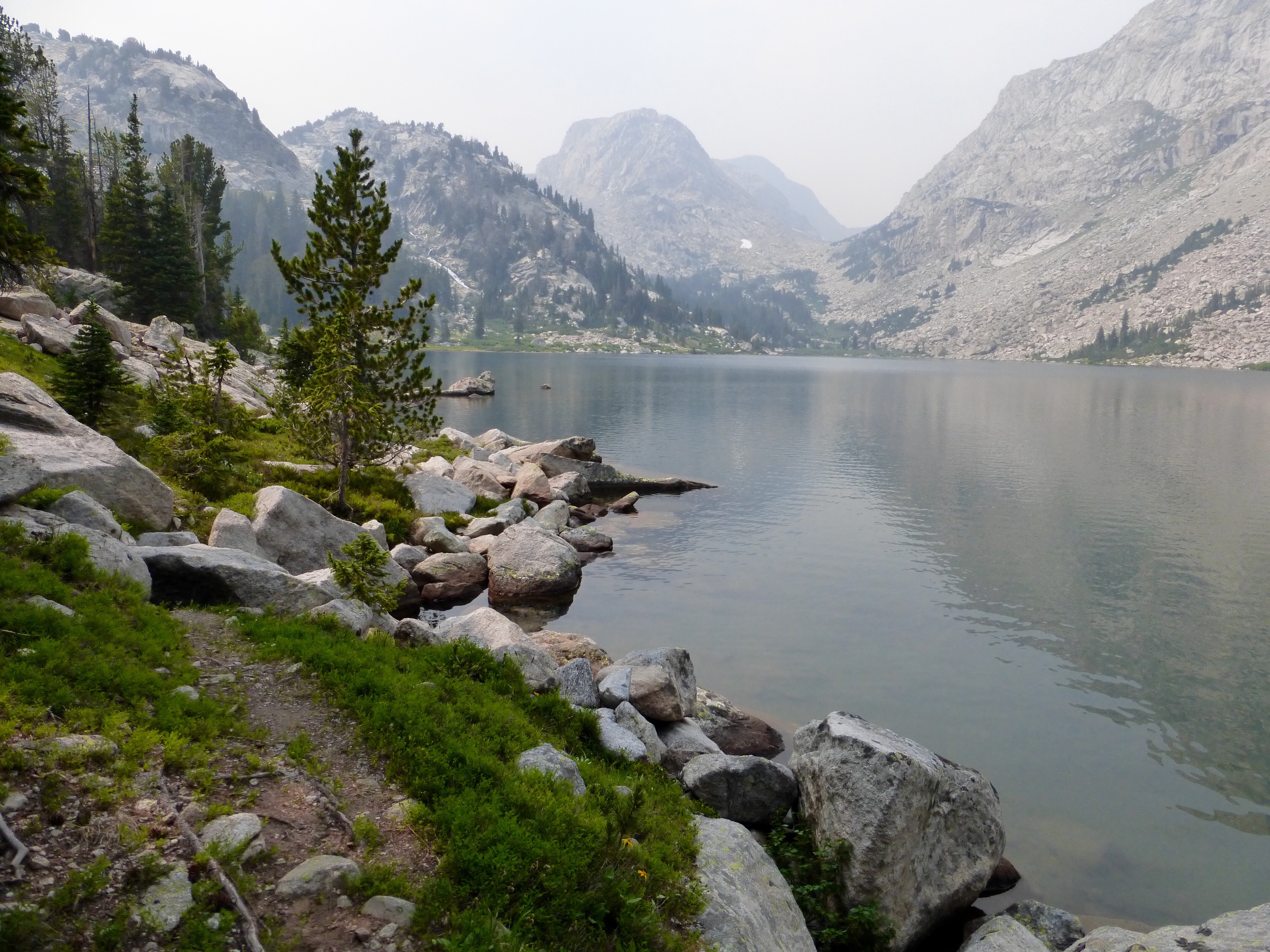 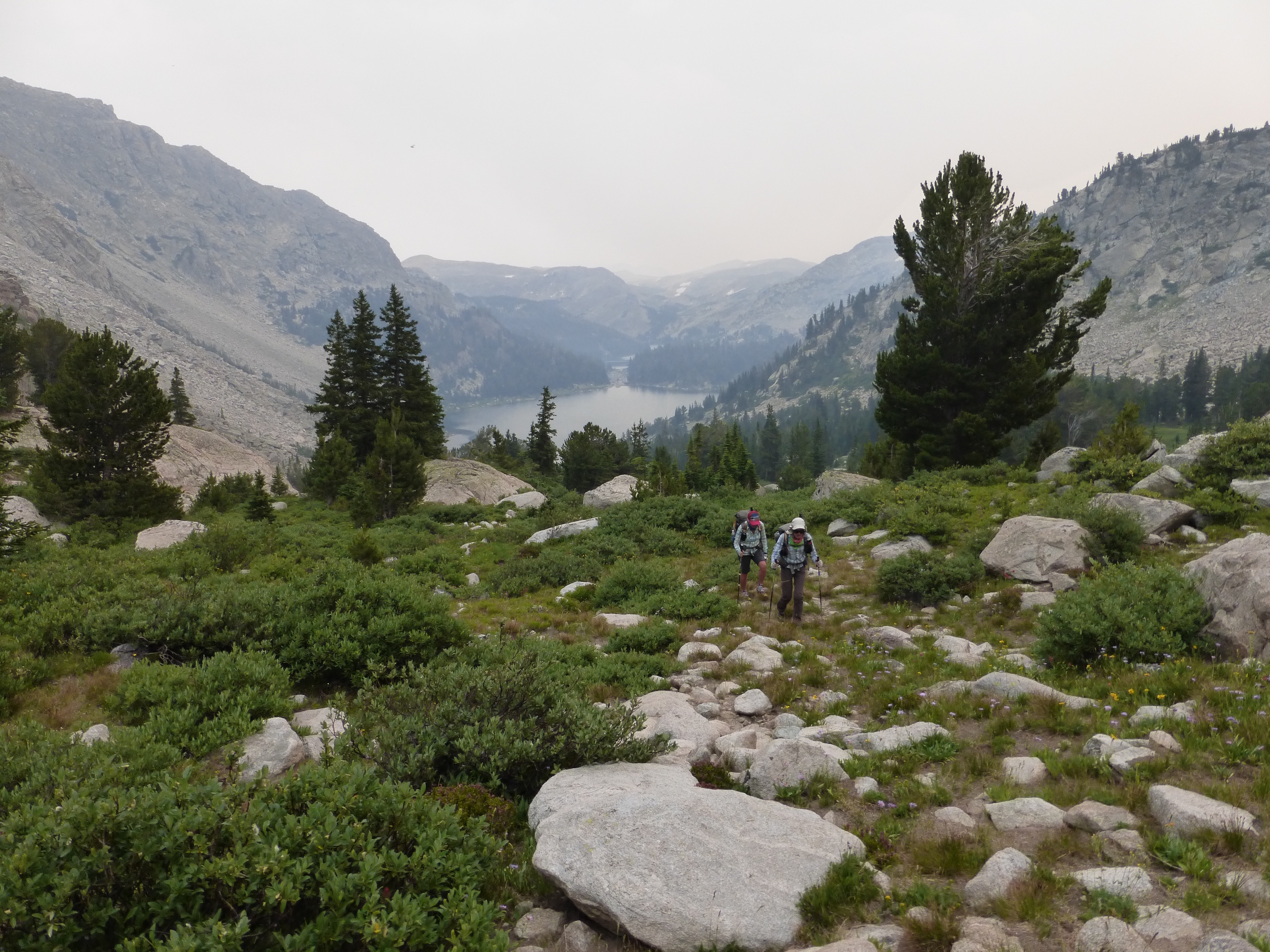 Looking back on Golden Lakes.

At the end of the day, we had a lengthy climb up to the lake below Douglas Peak Pass. We made it to the base of the pass at 5pm. The next camping wouldn’t be until well over the pass possibly 3hrs away. Dang, just bad timing. We decided not to push it and that was frustrating (I tend to push more than necessary), but it is completely understandable. There are a million combinations of what might happen or if/then situations, but it seems that we are still going to be fine and there is no need to push it tonight. Plus, it’s an awesome spot to camp! We will be at fully exposed camp spots for the next three nights, so the hope is for low wind and little precipitation. 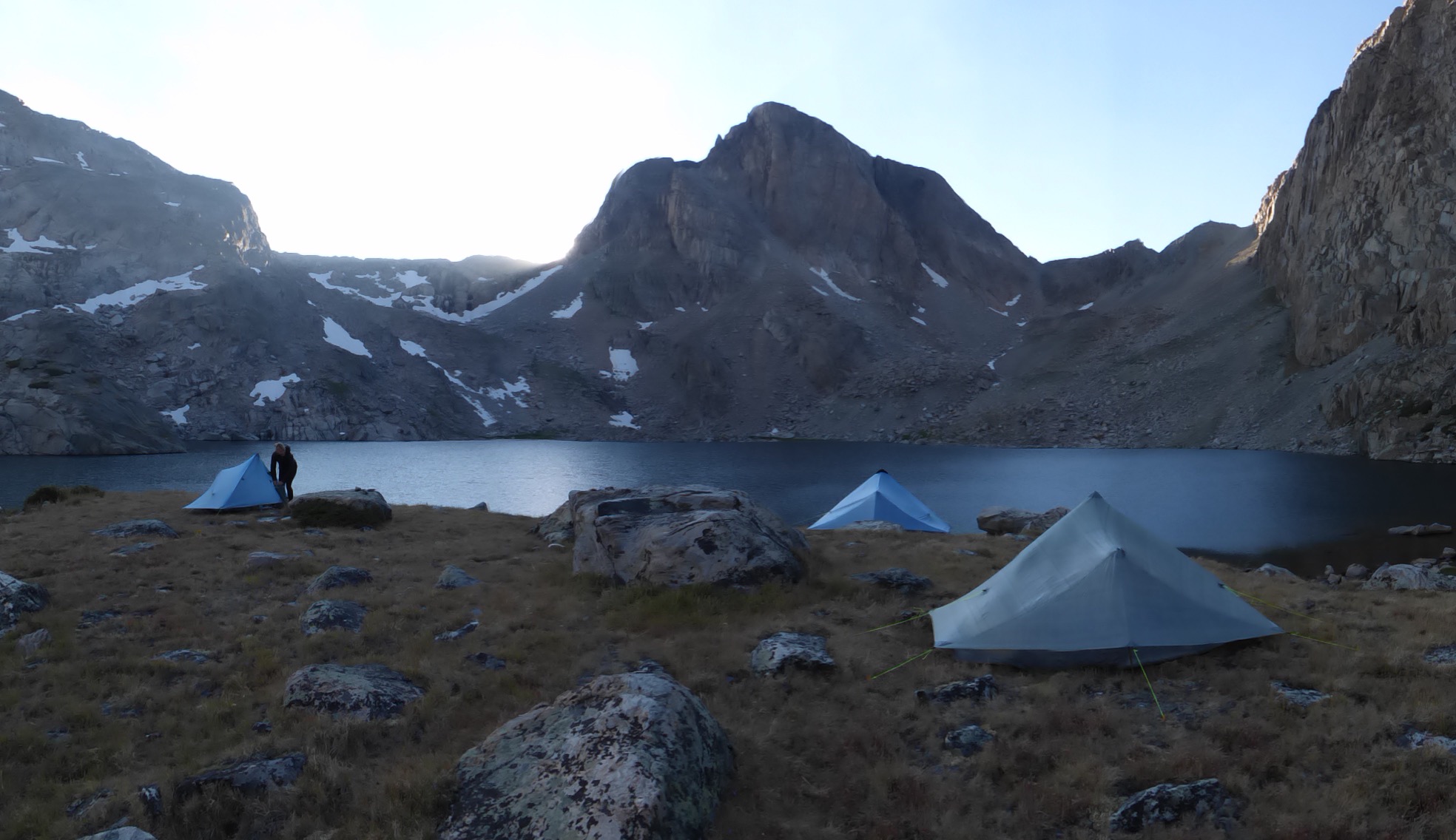