Day 6: Whew! Made It Over King Col

It was a good night of sleep at Charlotte Lake. That’s a great spot to do a weekend trip and there are tons of campsites. For the most part of today, we felt like we were back on the Great Divide Trail, which we hiked together last summer. Much of the day involved wooded hiking on game trail or old light use trail that would fade in and out. There are cairns from time to time and we had fun with the scavenger hunt. 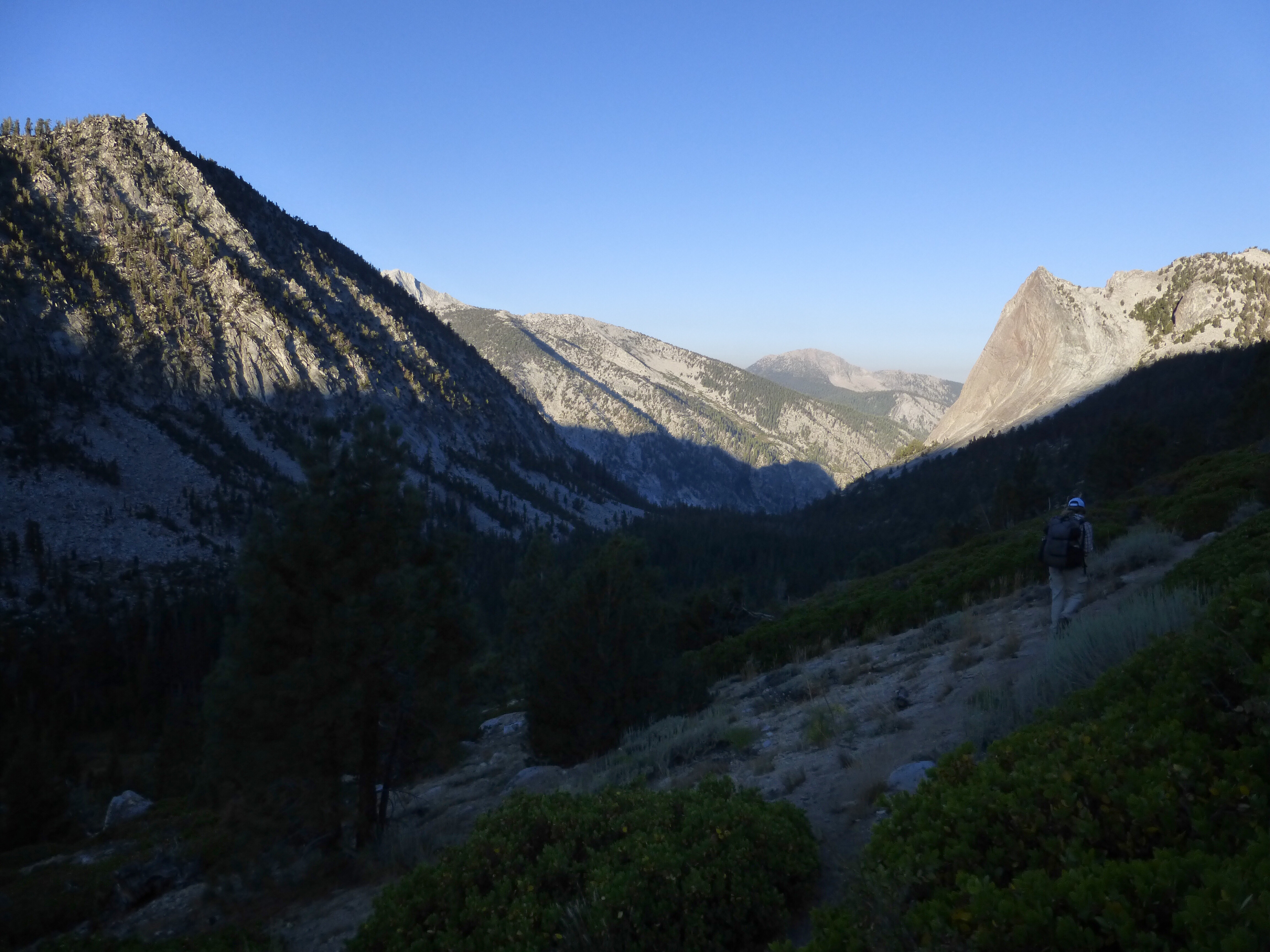 Heading up canyon from Charlotte Lake towards Charlotte Dome.

The first task was to head up canyon paralleling Charlotte Creek until we reached another canyon that turned before Charlotte Dome. When we reached that point, we turned into that drainage and headed up towards Gardiner Pass. 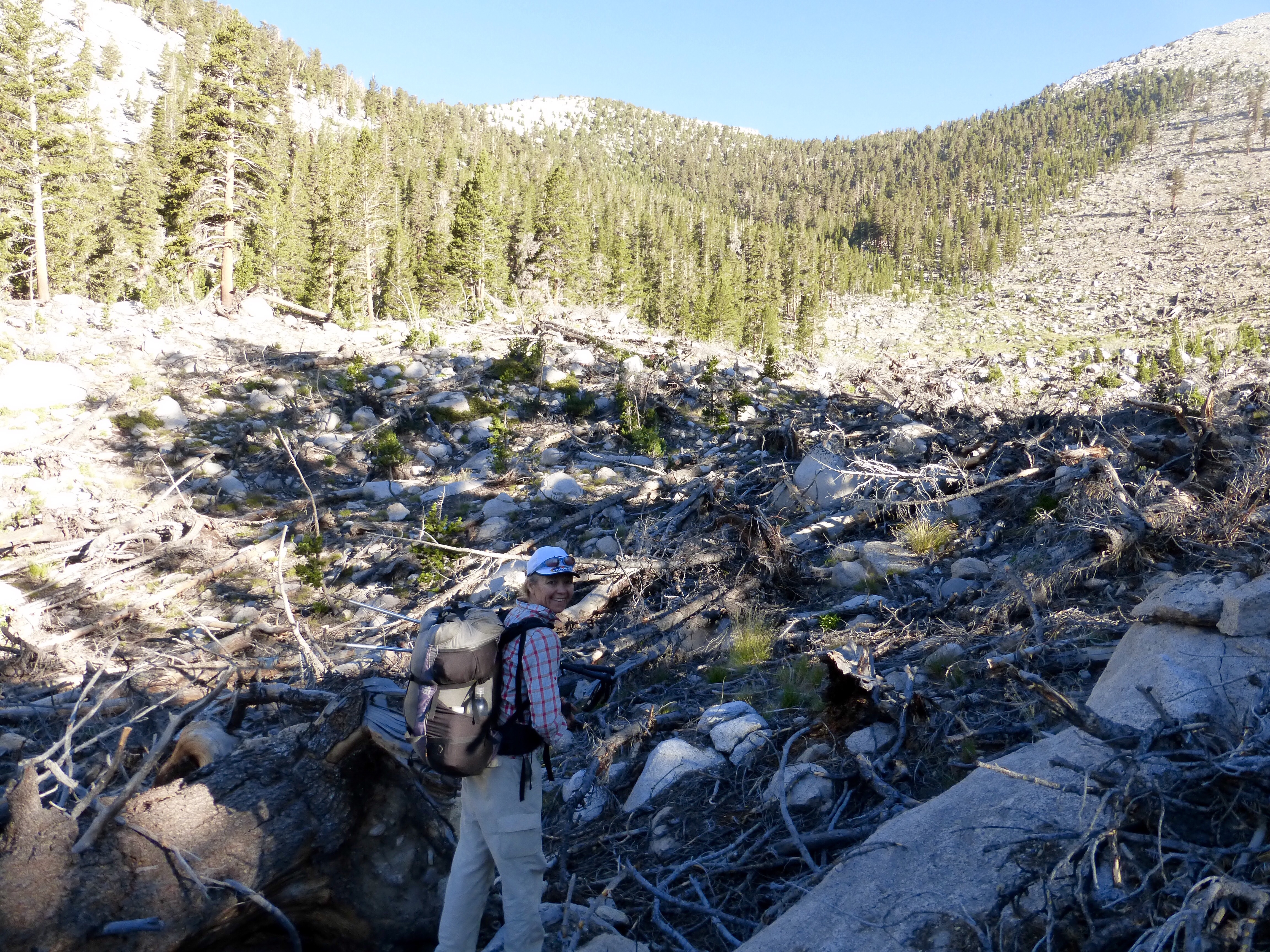 Gardiner Pass with an apocalyptic avalanche we went around.

Gardiner Pass was nothing technical, but we both were worn out by it for some reason. We think maybe it was from the pack weight and the culmination of all the elevation gain yesterday. The elevations on the map we have for this part are oddly in meters instead of feet, so I’ve enjoyed guessing the elevation we are at based on how I feel. I was close with Gardiner Pass, which was 11,179ft and a good contributor to why we both were moving so slow to get up it. 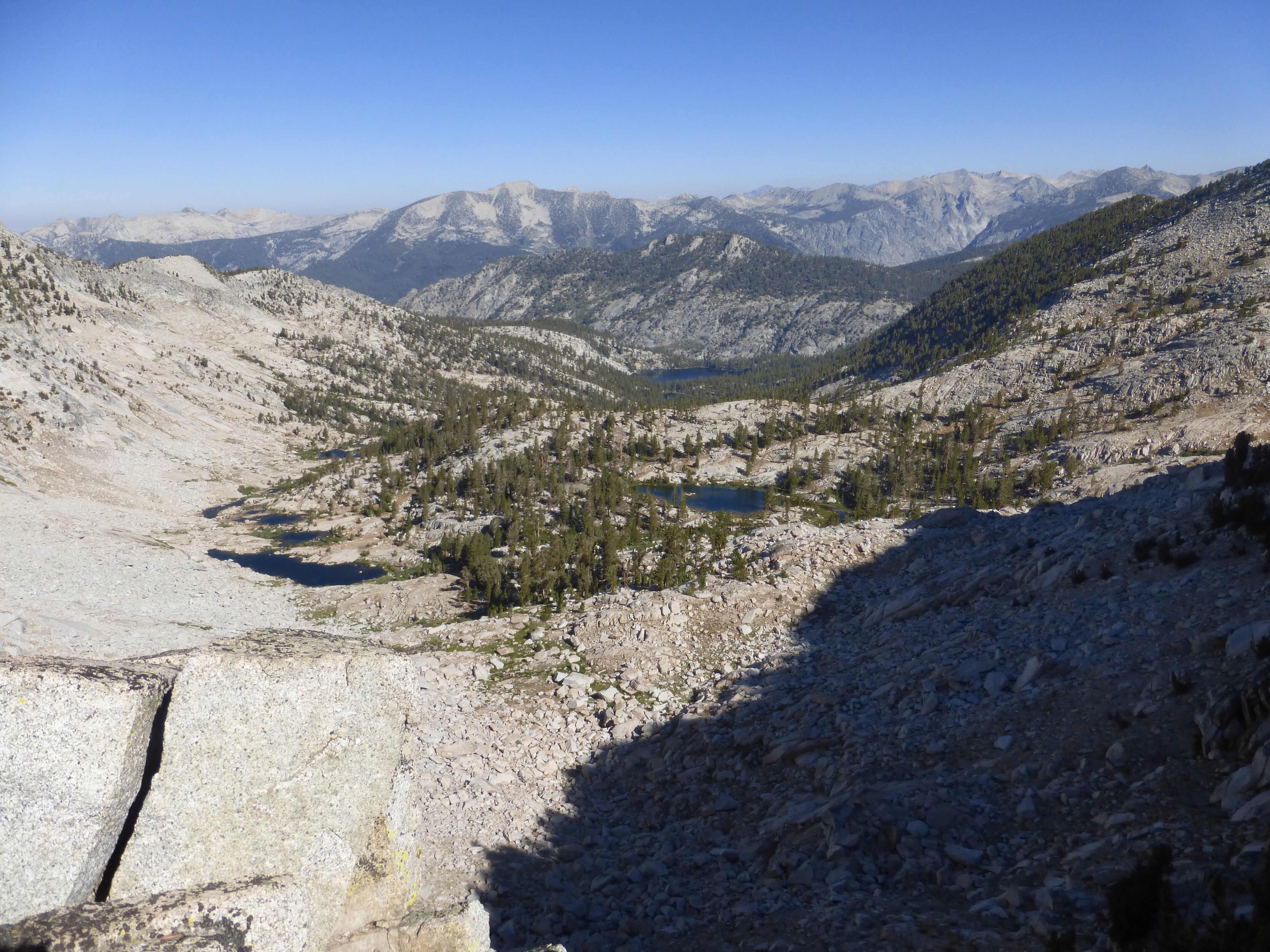 Looking down into Gardiner Basin.

From Gardiner Pass, it was 2-3hrs of more of the wooded, rocky, sometimes overgrown stuff coming in and out of a light use trail through Gardiner Basin. Skurka mentions on the notes that it isn’t an enjoyable section and he’s right. It’s not terrible, but definitely not as enjoyable as what we’ve been doing. For us, it was just reminiscent of the brushy GDT moments and we were thankful it was dry. 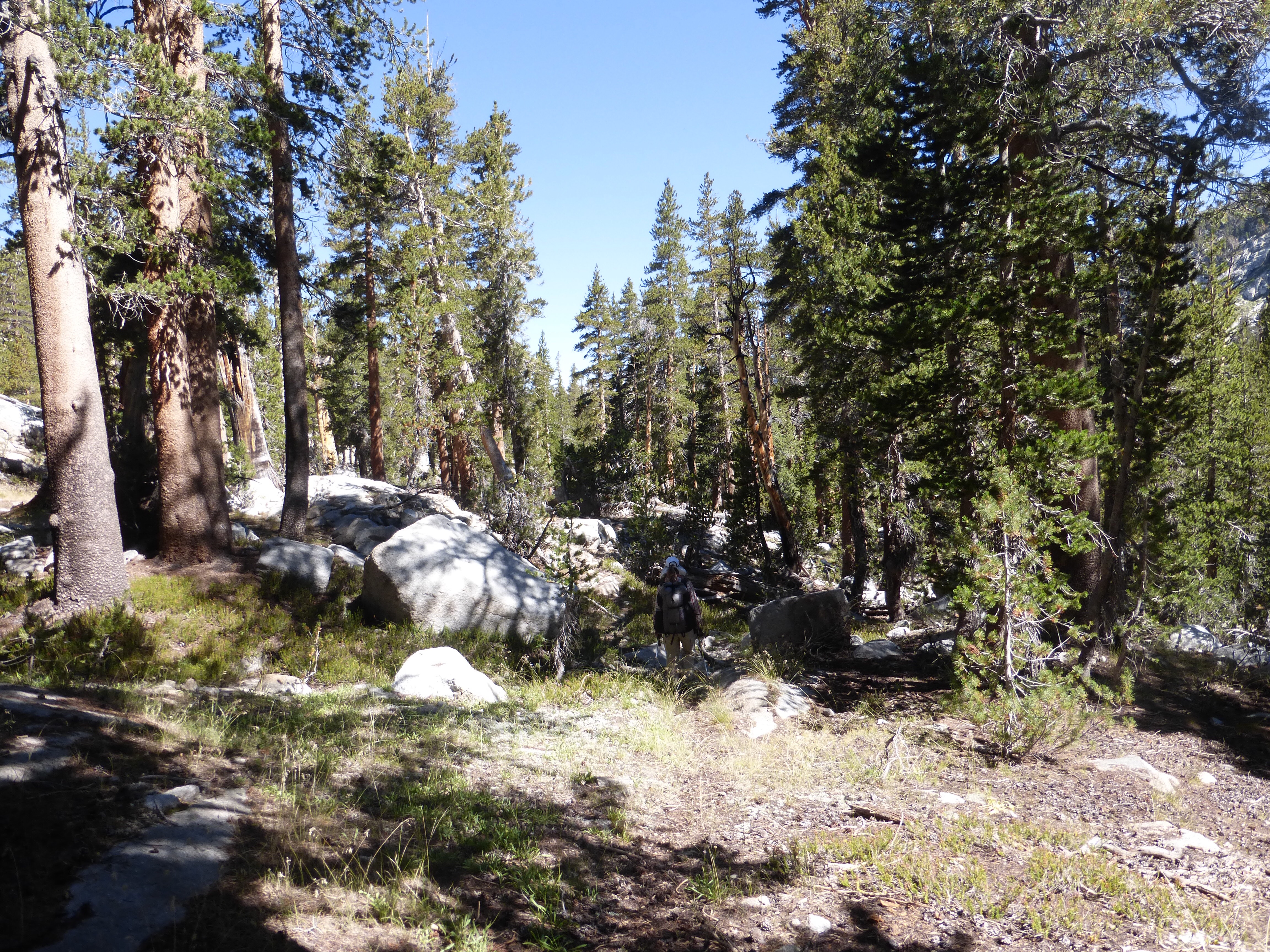 E hiking through some of the overgrown stuff.

Just after 11am, we hit a nice unnamed lake. We usually don’t have lunch that early, but we knew we were just headed into more woods and that this spot was too good to pass up. Down the lake, we saw a couple finishing up their break and they headed in the direction we were going to go. We wondered if they were doing the KCHBR as well. 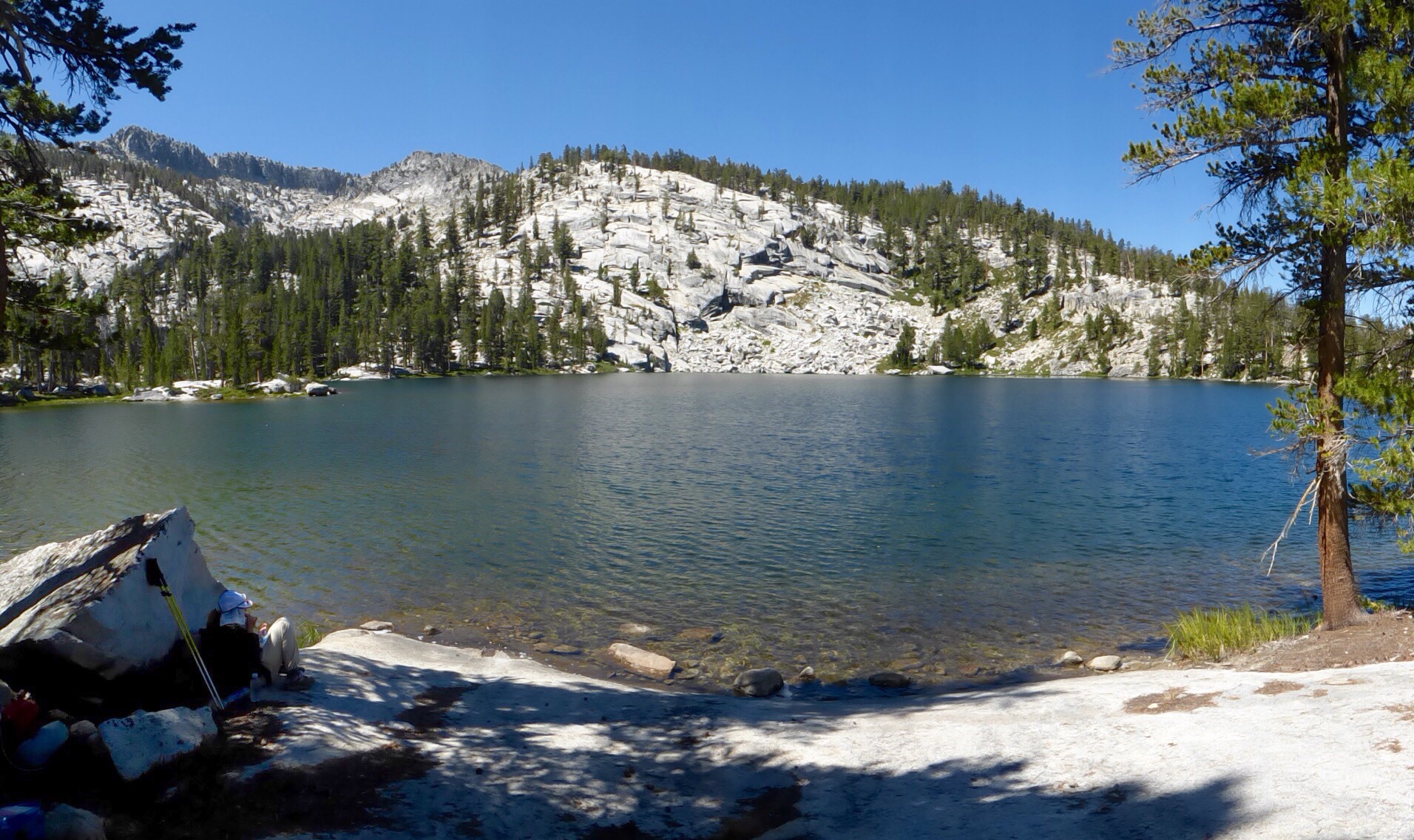 Lunch at an unnamed lake. 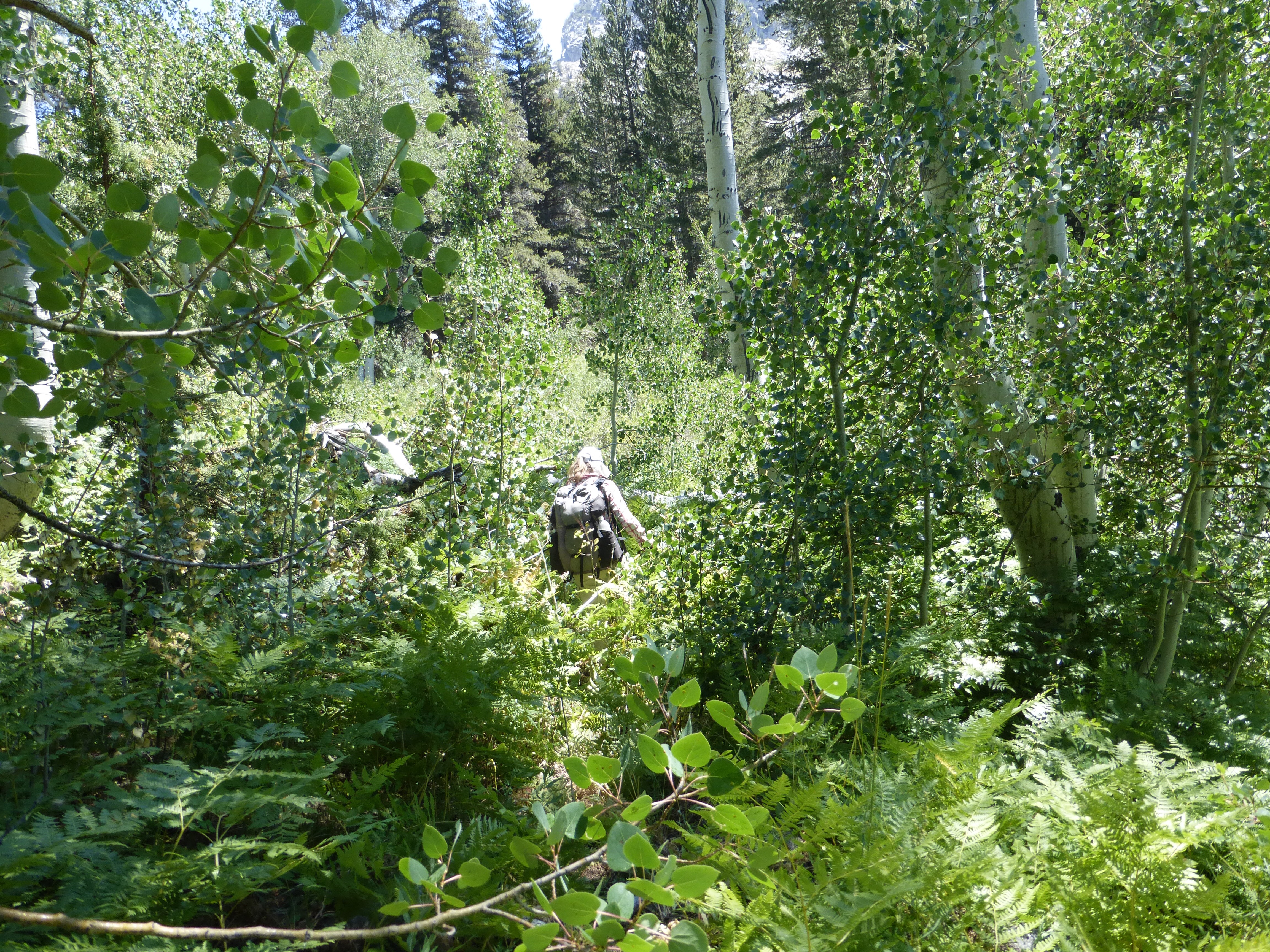 The big question mark of this leg is King Col, a sketchy pass. Our original itinerary had us doing it tomorrow morning, but we are ahead of schedule and seemed to be headed for it at the end of today. Just as we were getting to the base of it, we intersected with the couple we saw at lunch. Their names are Mallory and Chris and they are out here for over a month doing their own mostly cross country route. For the second week of their route, they decided to do the first half of the KCHBR. We were relieved to see that others are out here attempting King Col. 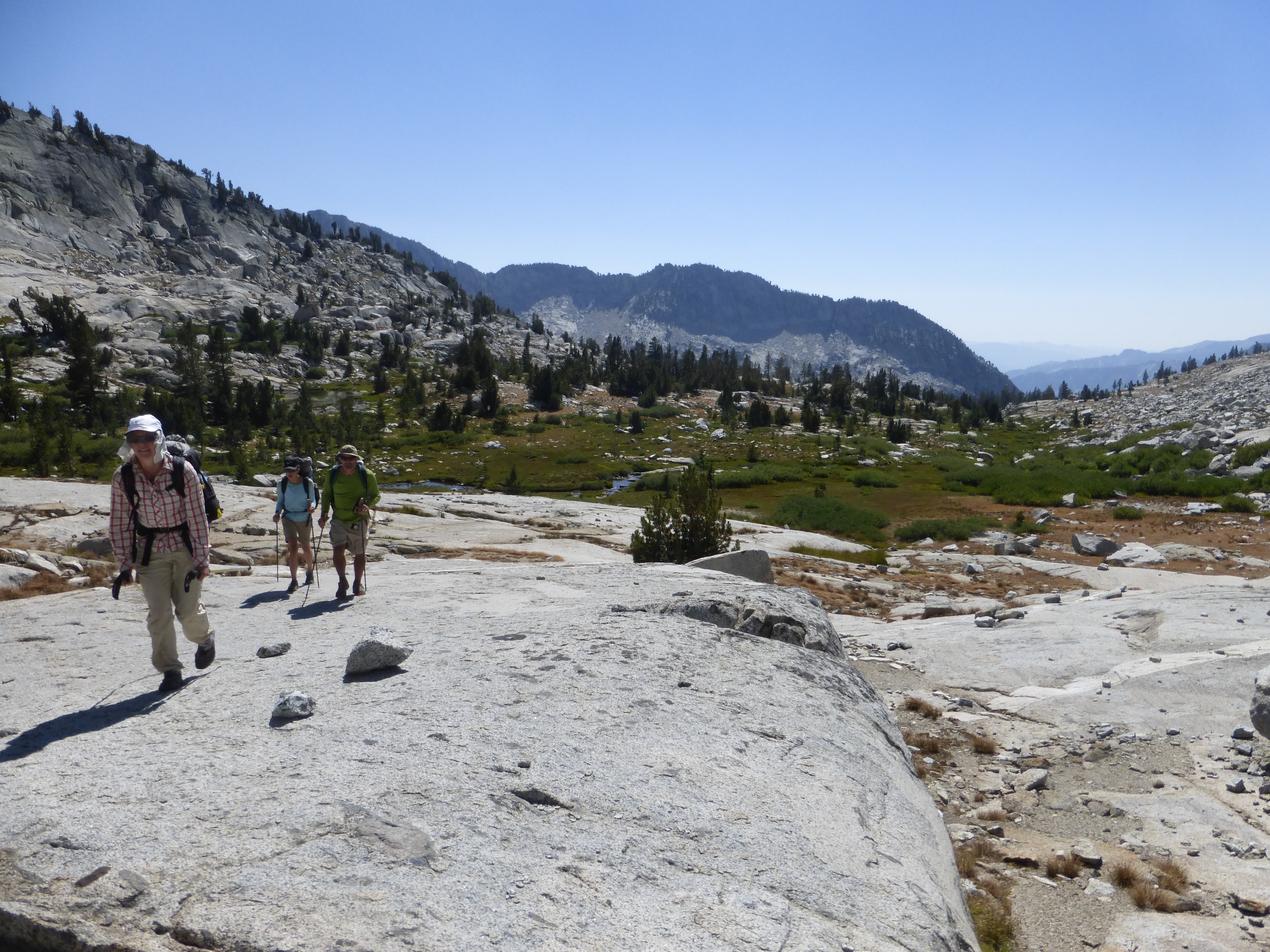 E, Mallory, and Chris hiking up to King Col.

The online forums warn against going over King Col and have criticized Skurka for including it on this route. We’ve seen photos and there are two reasons why people think King Col is unsafe. First off, it tends to hold a year long cornice that can block people from getting over the pass. Second, the descent is sketchy with steep ball bearing terrain. A thin layer of sand and small gravel on rocks.

There are alternates to King Col along the same ridge, but all are also not recommended unless King Col is really impassable. We all assessed the ridge and tried to determine which pass was the right one. We still have yet to use the GPS on this route and are really trying to stick solely with map and compass. We all agreed on a spot and headed up. 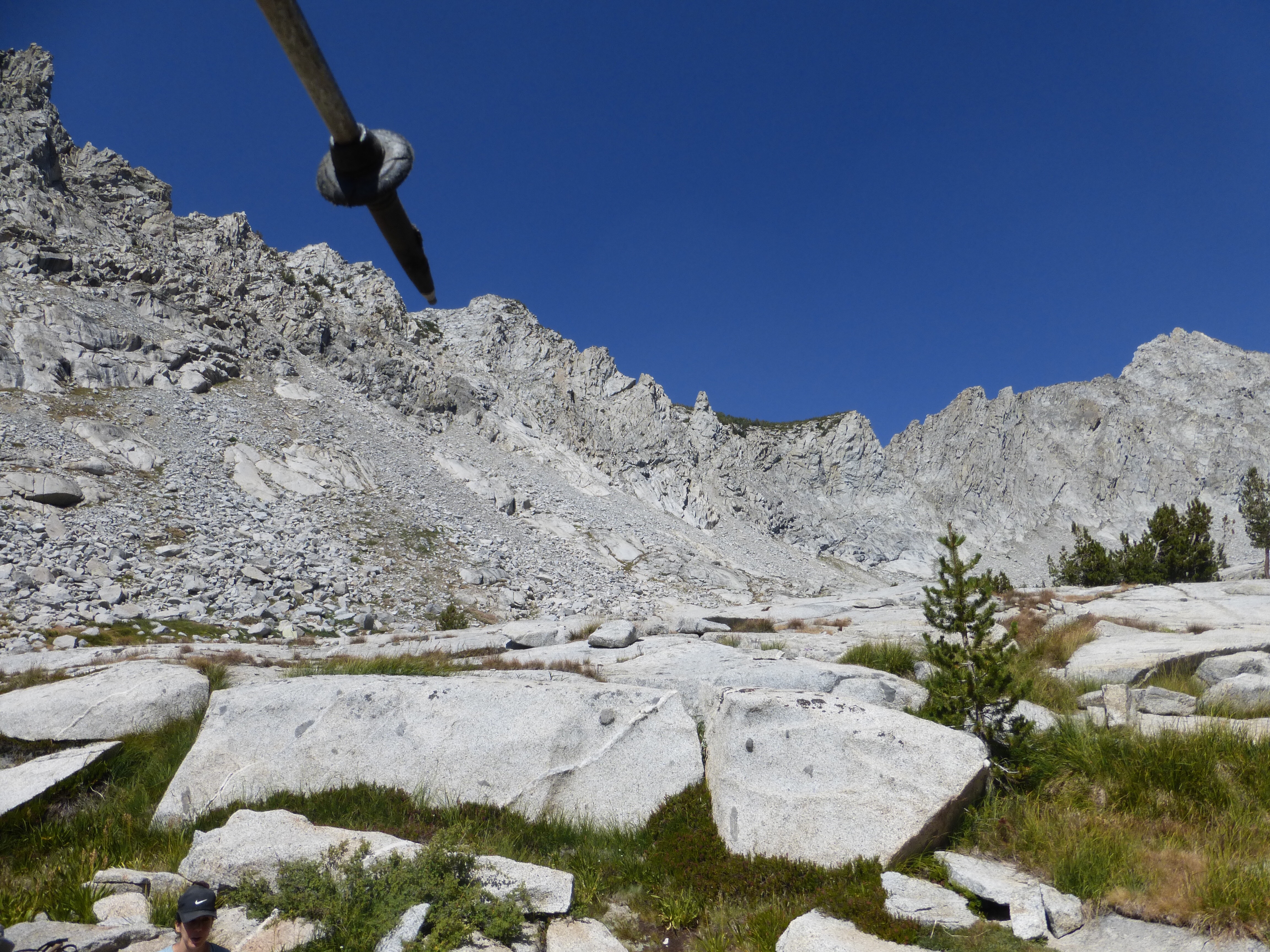 Our (incorrect) attempt at King Col. It ended up being a couple notches to the left. 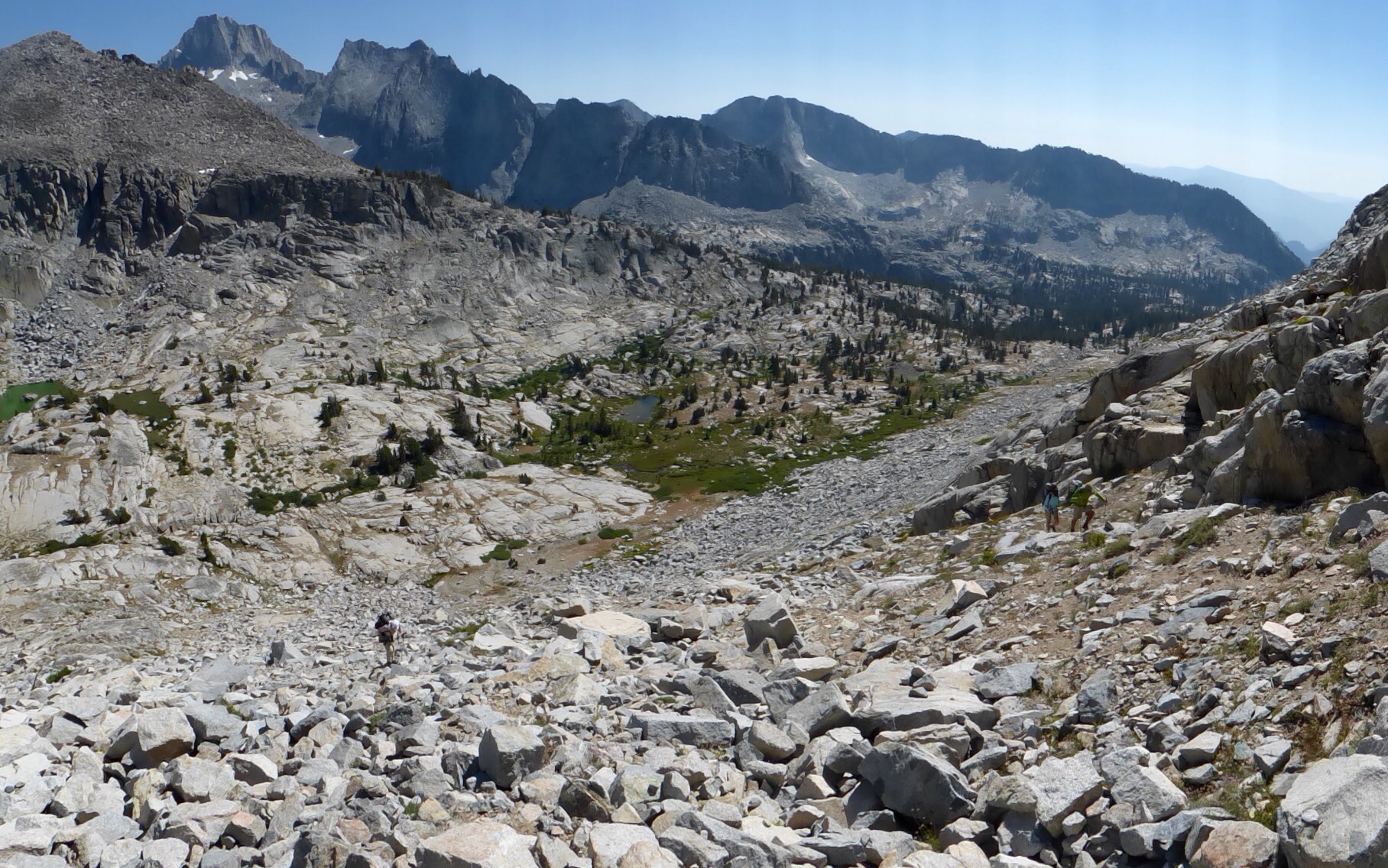 E (left) and Chris and Mallory (right) hiking up.

When we got to the top, we knew from photos we’d seen that we were in the wrong place, dang! We caved and checked the GPS, we were two notches over (600ft away). We could clearly see where we needed to go down from the pass, so the four of us assessed the options of going down the two gullies we were standing at the top of. Chris chose one that he and Mallory decided to try. It was way beyond our ability level. 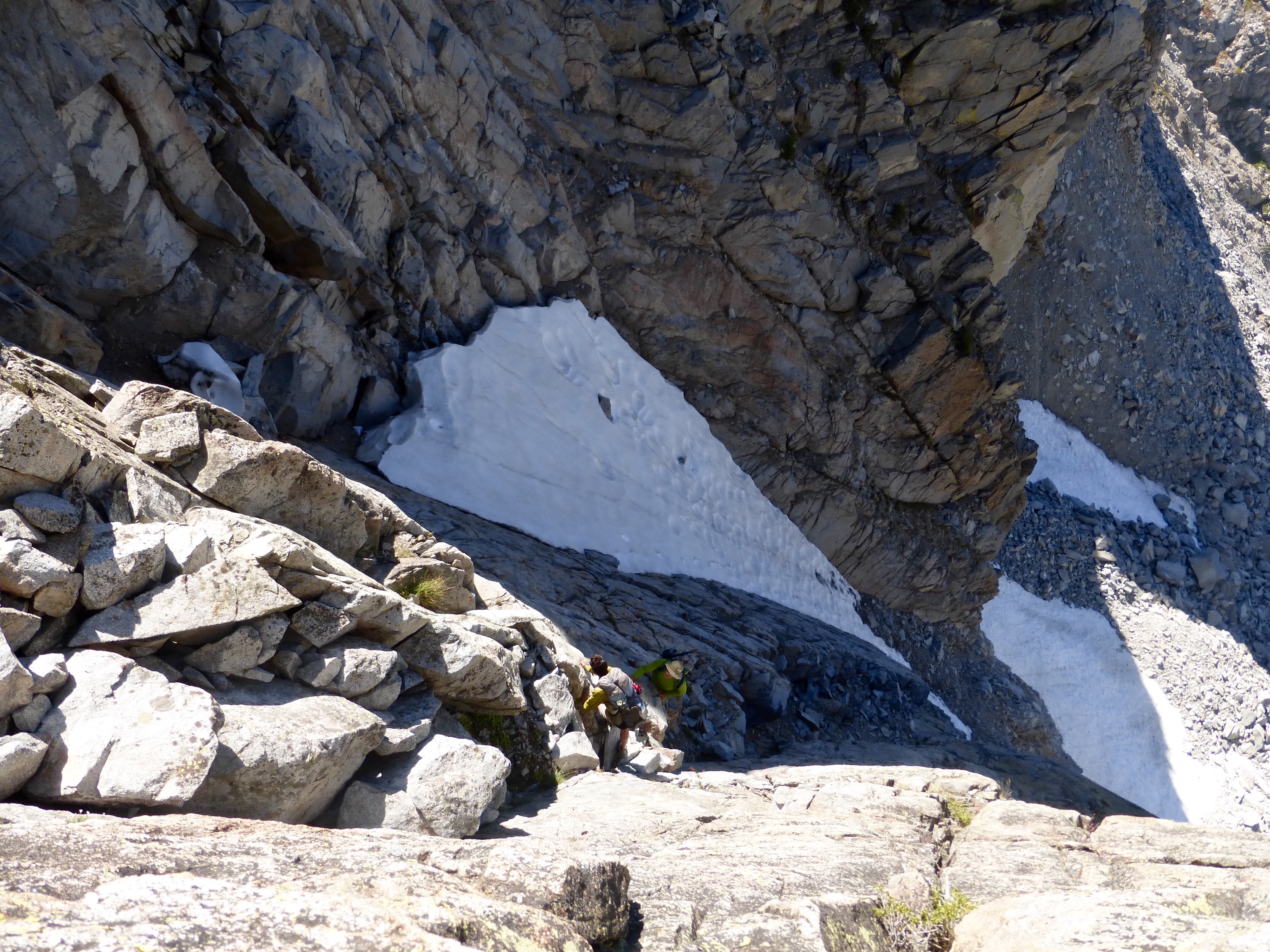 Chris and Mallory going down an intimidating chute.

We decided to hike the ridge over to the actual pass and give that a try. Fortunately, we were in a good position to get over there without having to hike back down and around. When we go to the actual pass, we saw what we were worried would be there. A wide cornice across the whole pass. It looked just like the ones wee seen online, but the cornice was covering the full length of the pass. 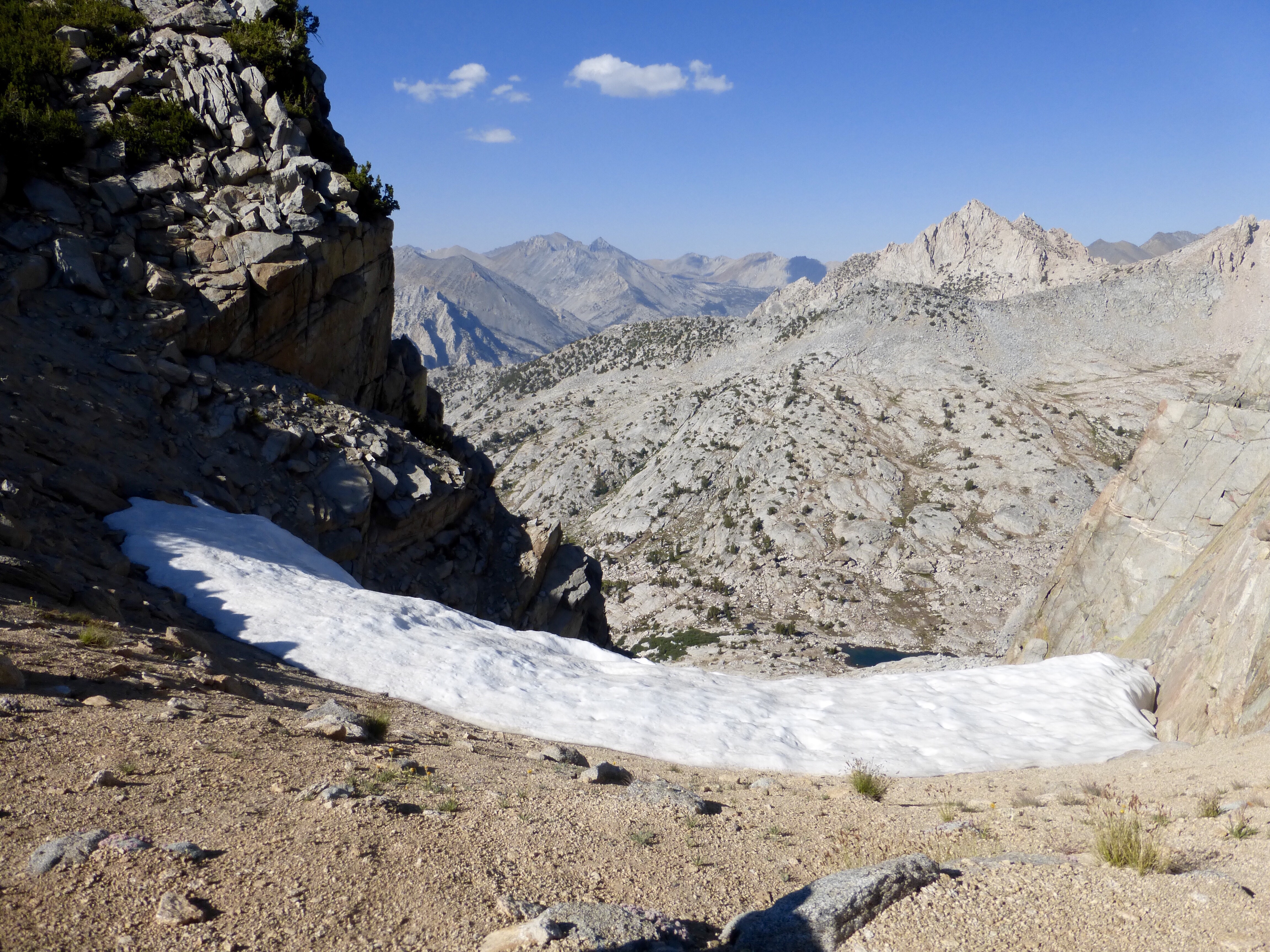 We can find a way over that cornice, right?

Fortunately, we decided to play it safe and we each are carrying one microspike so we could share if this was the case. We found a small corner on the right side of the cornice that we could shimmy down and get in position to go across the cornice. 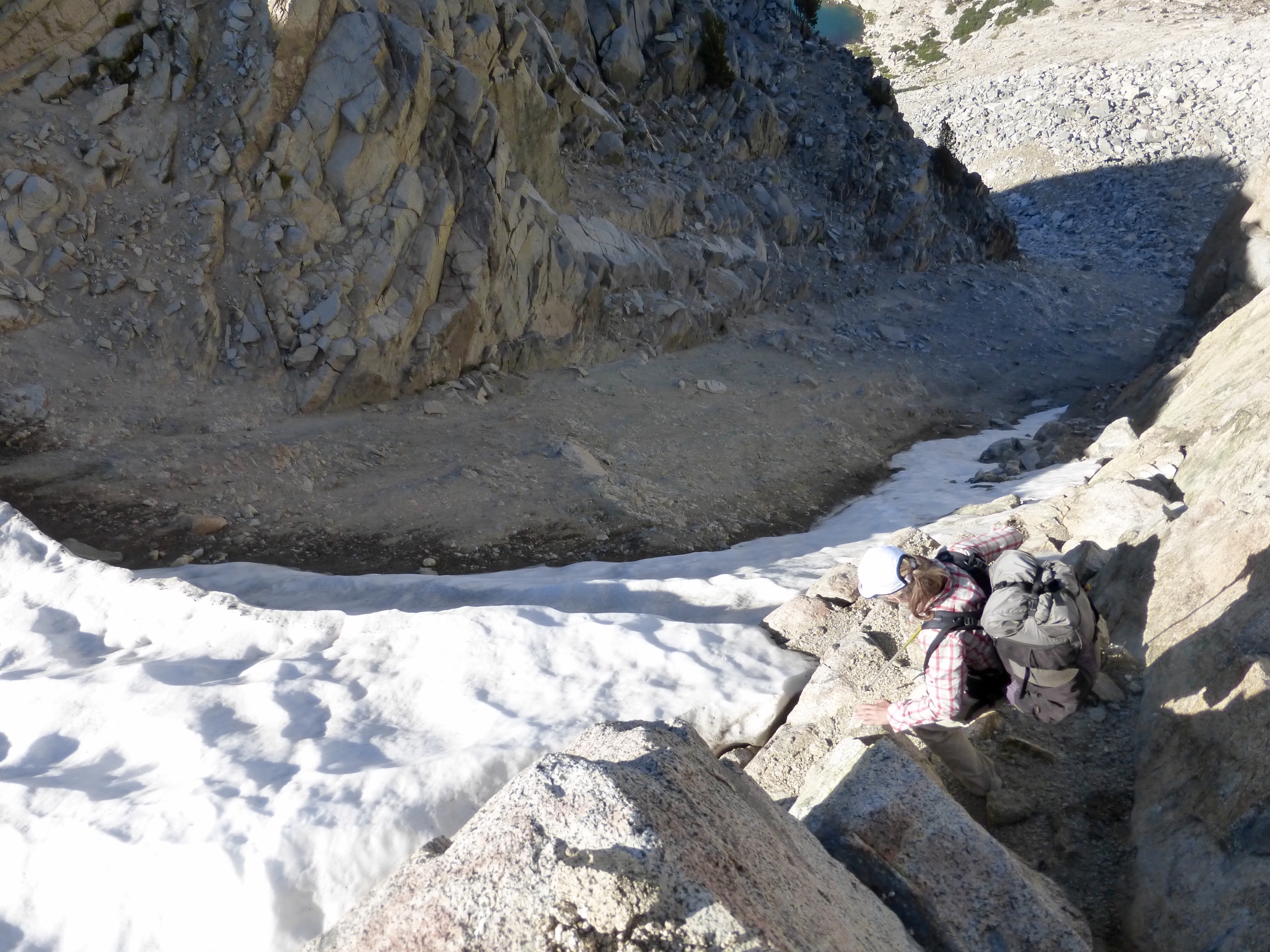 Getting in position on a small spot to down climb and cross the cornice.

There was an element of sketchiness to it, and we considered other options, but in the end, felt that this we within our ability and comfort zone. I was more comfortable with cutting steps since I did the SHR early season this year and this was not nearly as sketchy as some of the things we did for that…well maybe it was and I was just numbed to it after repeated exposure. This was pretty huge for me to do compared to where I was on this type of thing to start this summer. 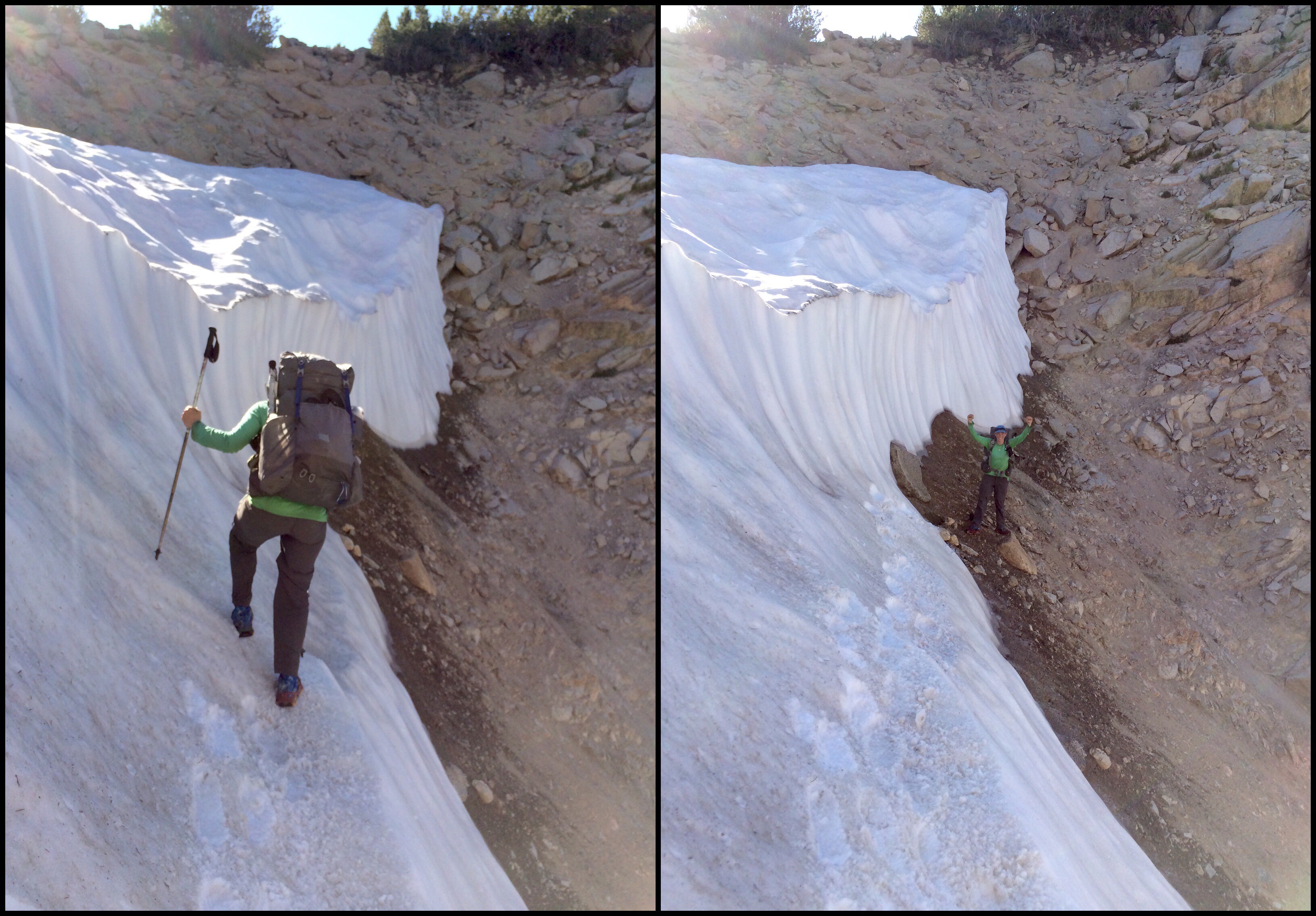 Me cutting steps across the cornice.

E coming across the cornice.

Our strategy worked really well. I use both the microspikes to cut steps. Then I took off the micros and E tossed me a hanging line with a clip. I attached the micros and she was able to pull them up and use them to traverse the cornice. The cornice was really solid and not soft at all, so it took a bit to cut the steps, but once they were there, they were secure.

Now that we were over the first hurdle, we needed to get down the ball bearing stuff. It was a bit thicker than we expected and since we had the micros, we each used one for traction. We were able to scoot and crab walk the top portion and never felt sketched out. E took a video that depicts it quite well. 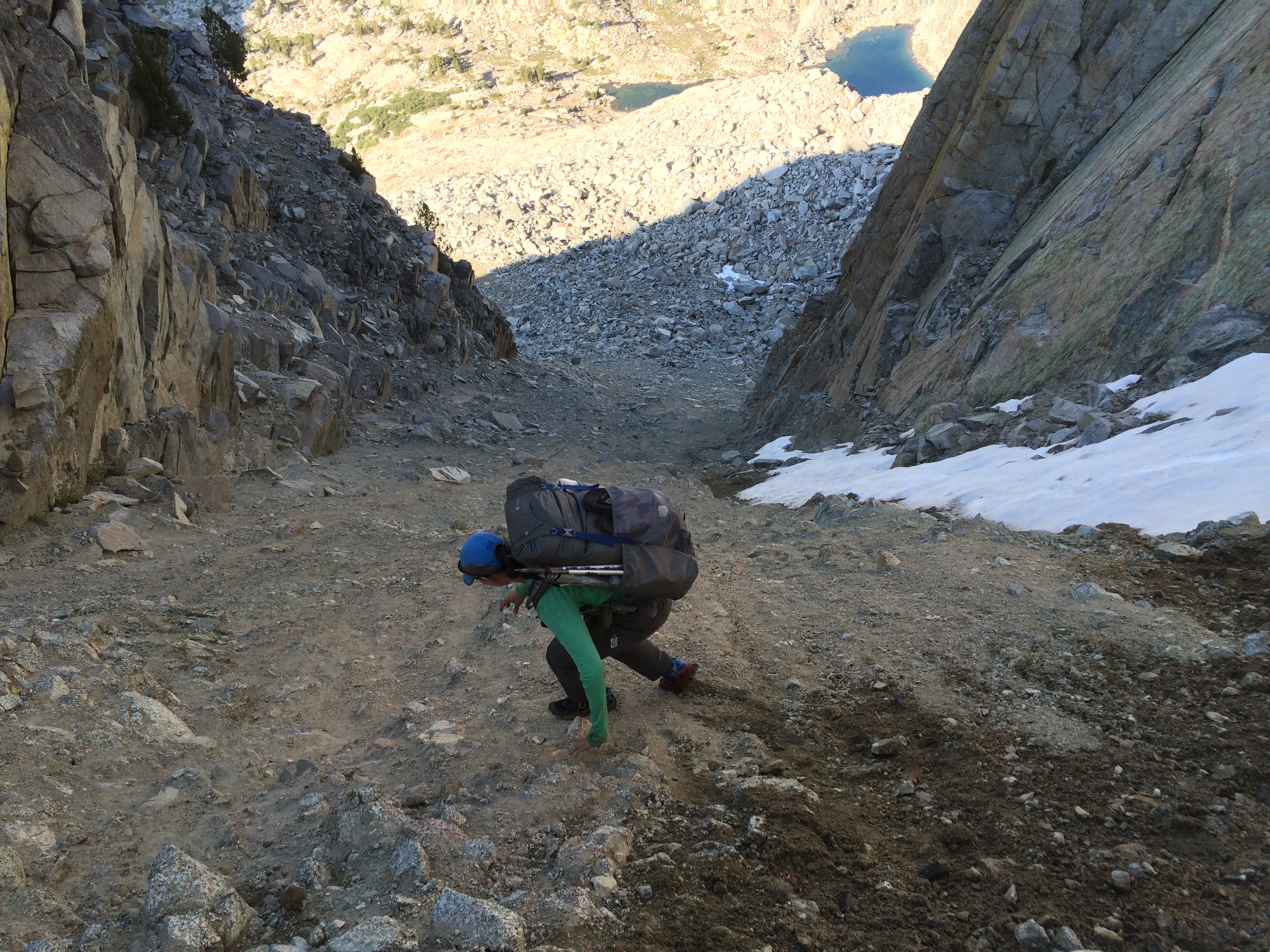 Yep, it was steep.

Then we could get to the left wall and use that as handholds and a bit more traction. Once midway down, I crossed to the middle and had fun kinda surfing down on the loose gravel. Below that was larger rocks we had to hop for a bit to reach the lakes and campable terrain. My legs were like jello by then and fatigued. 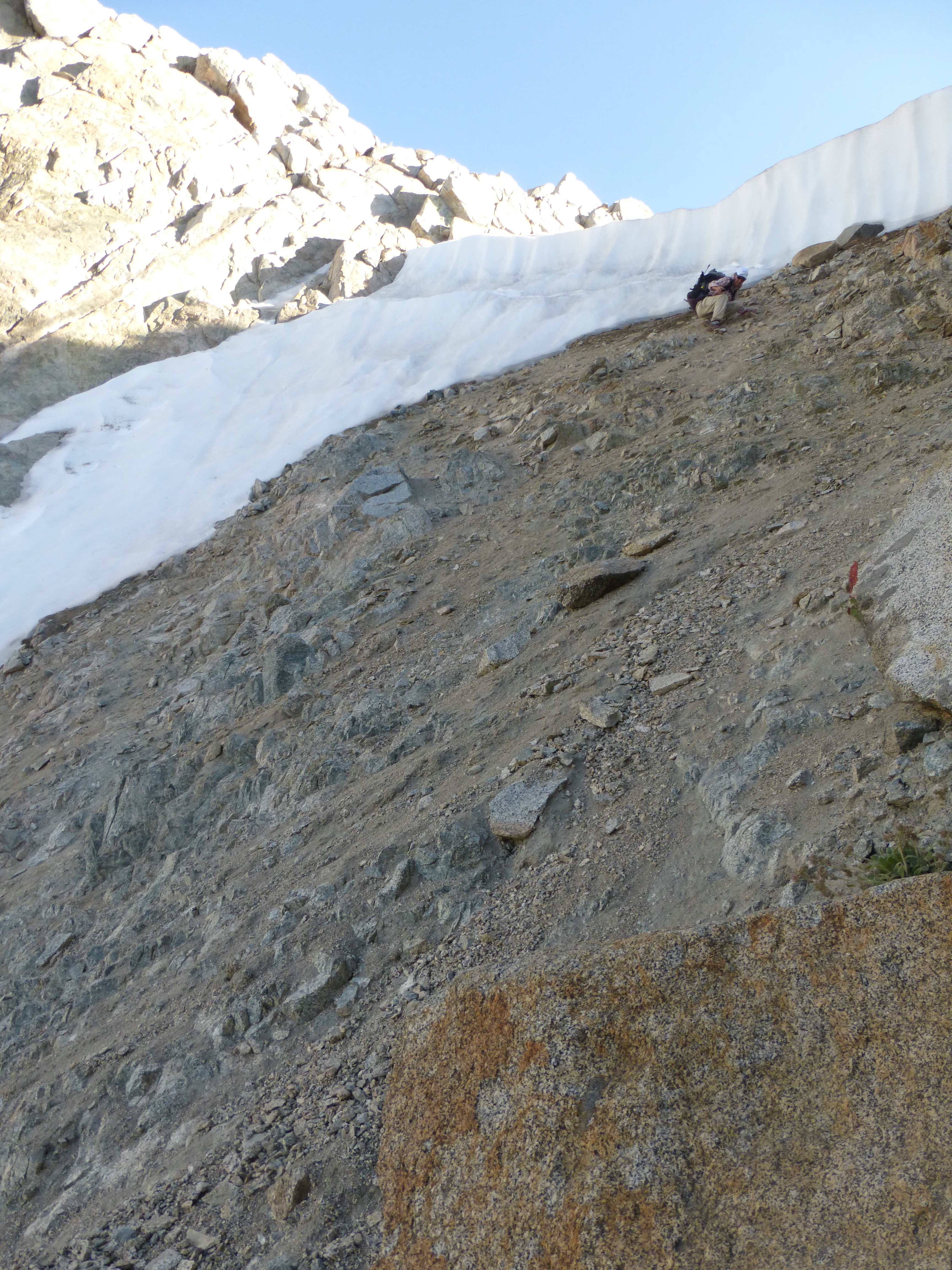 The stay-low-and-scoot approach worked quite well for us. 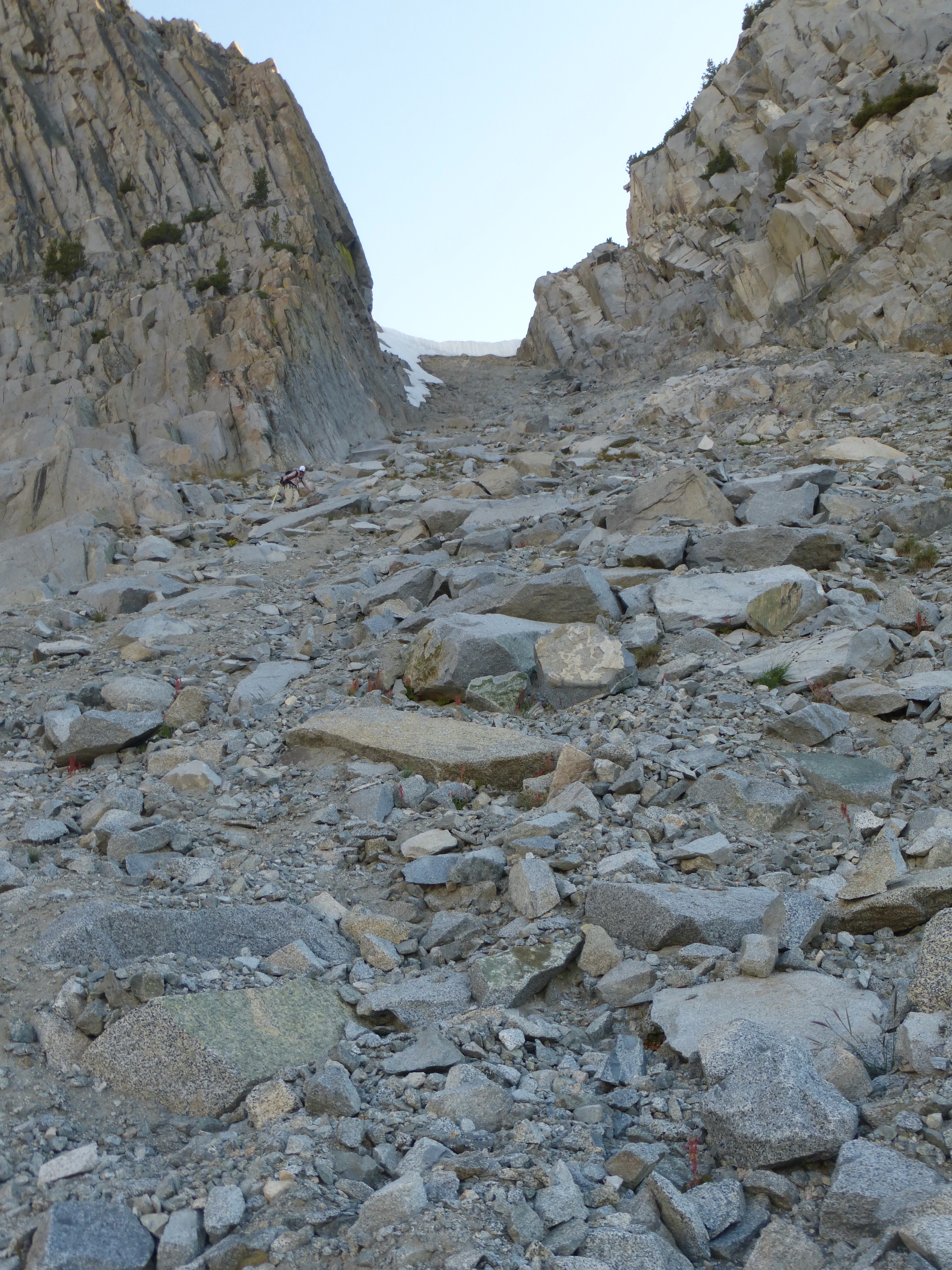 E on the left on the less steep section able to stand up.

When we got down to the lakes, we were reunited with Chris and Mallory who did make it down safely, but said it was the sketchiest thing they’ve ever done. Looking back on the crack they came down, it looks impossible that anyone could get down that! 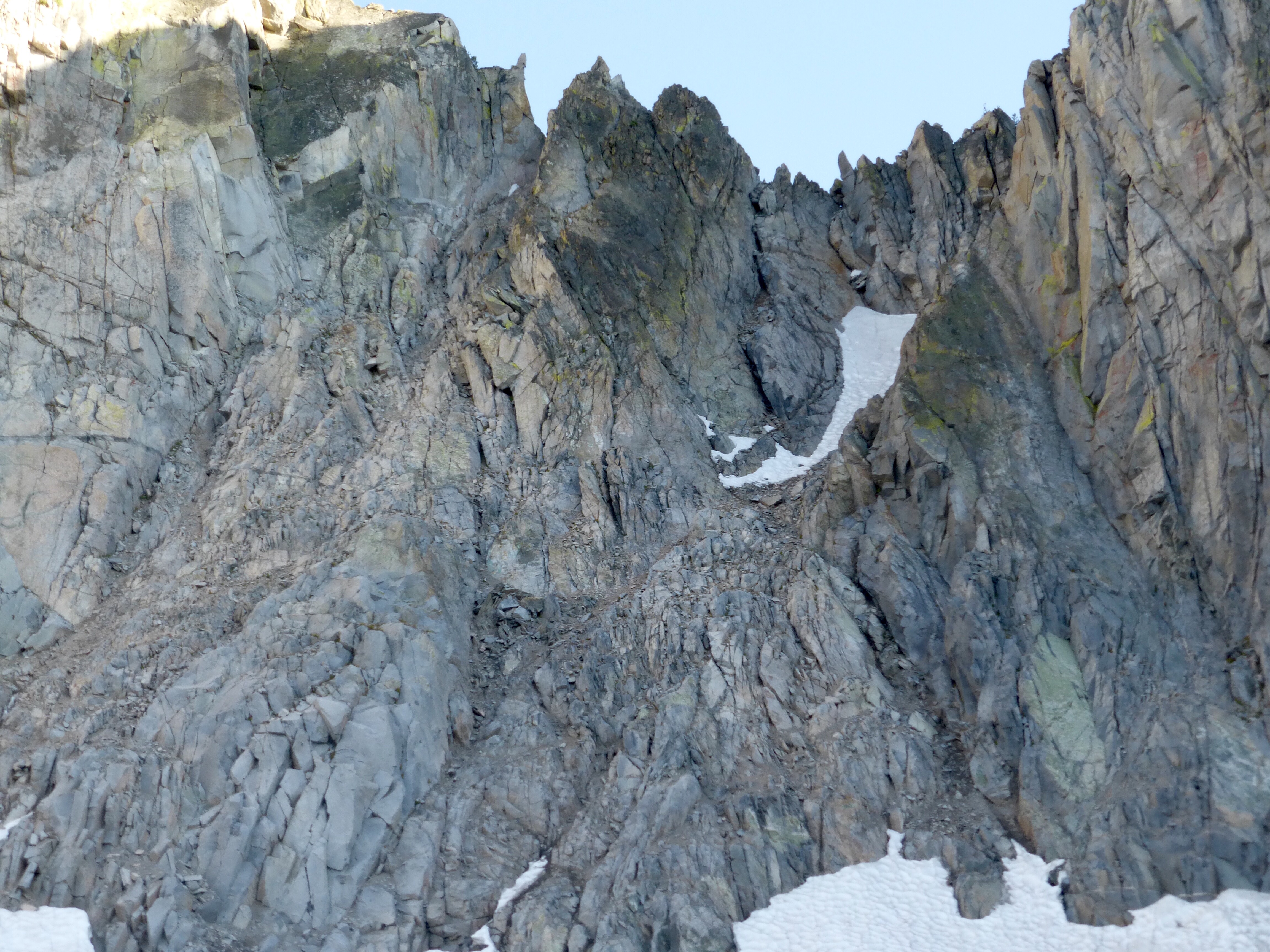 Chris & Mallory went down that black crack above and left of the snow in the middle. Crazy! 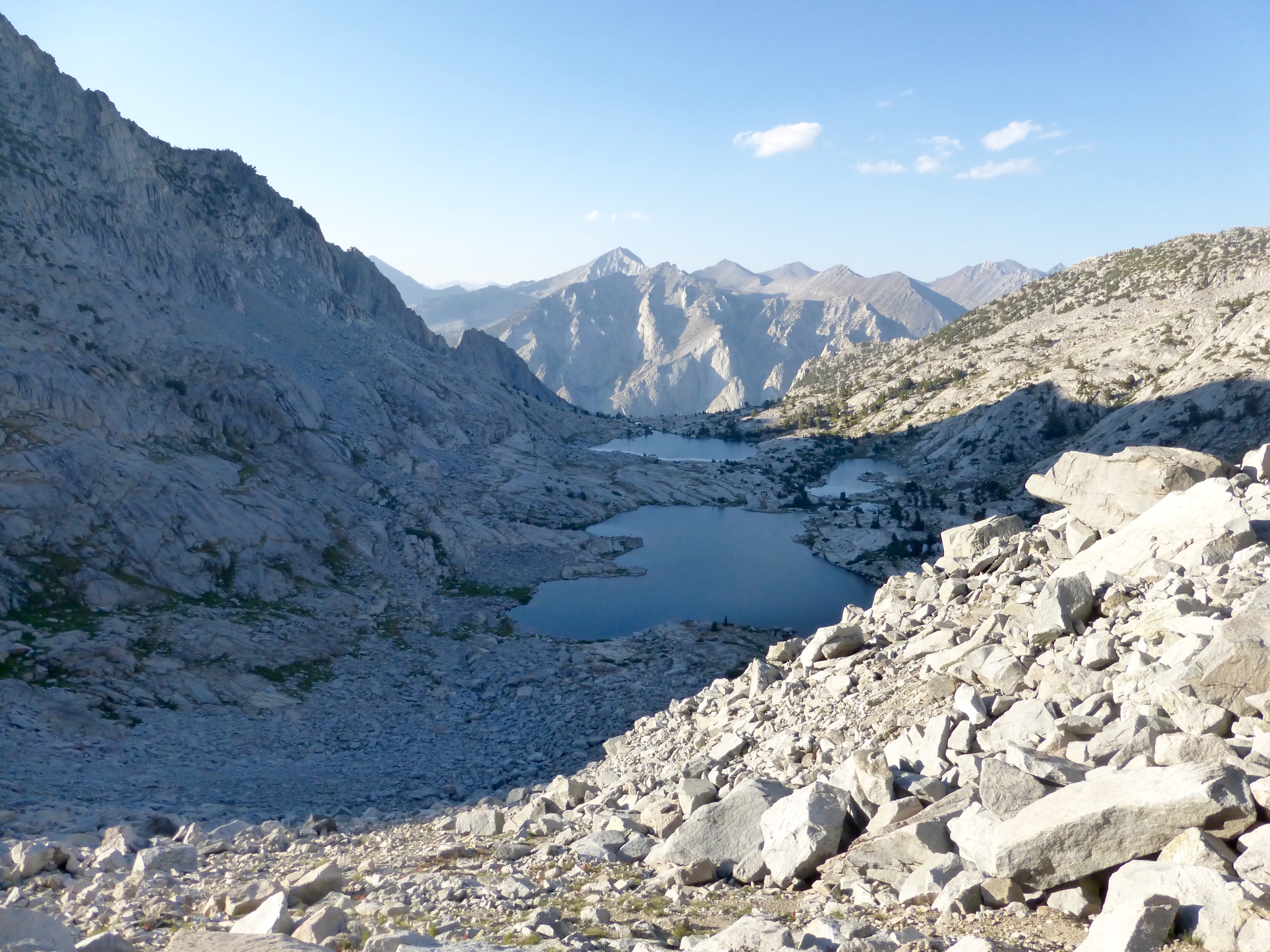 Finally down and now just a bunch of talus to get to camp at the second lake. 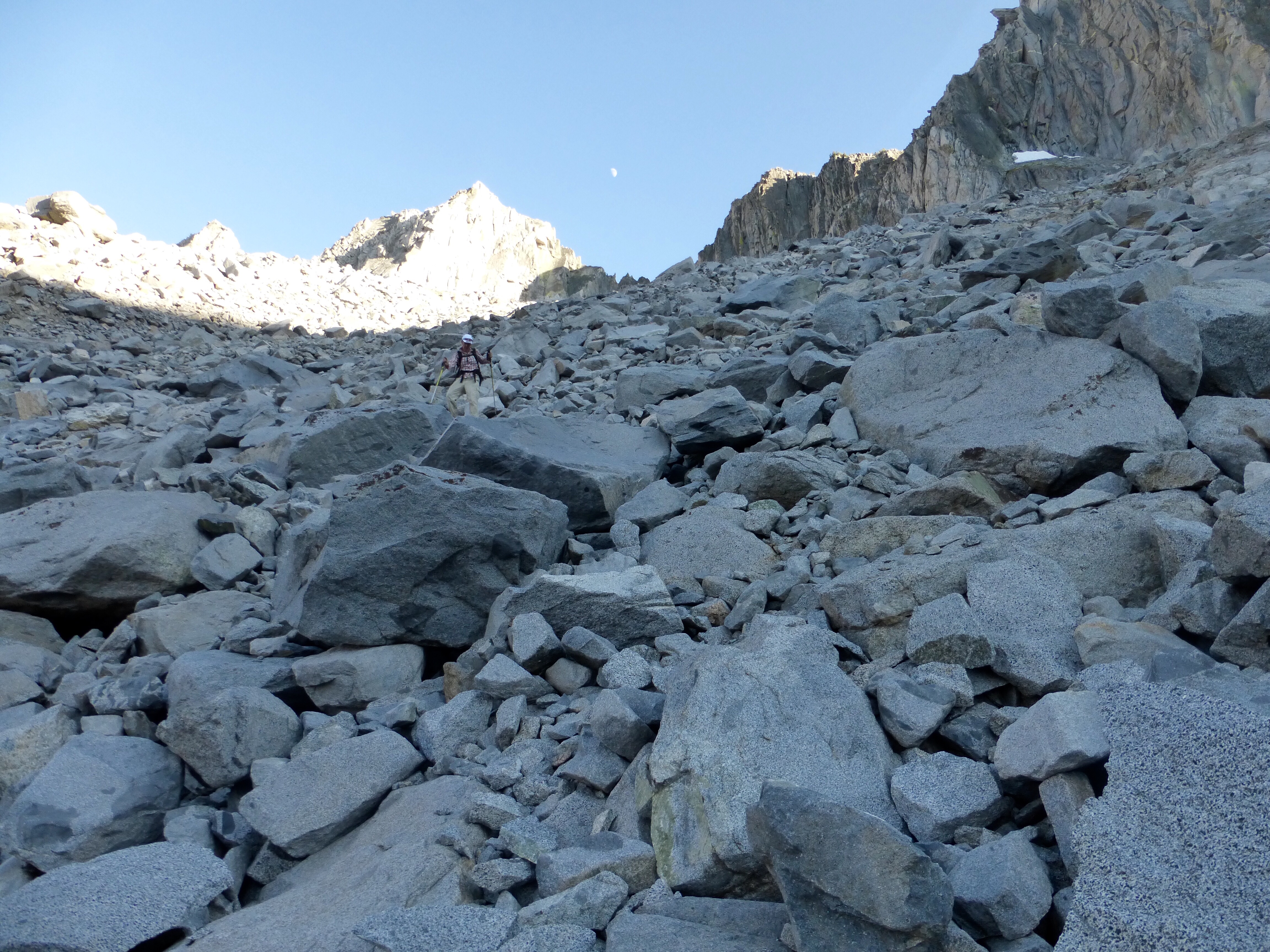 Check out that half moon in the center. 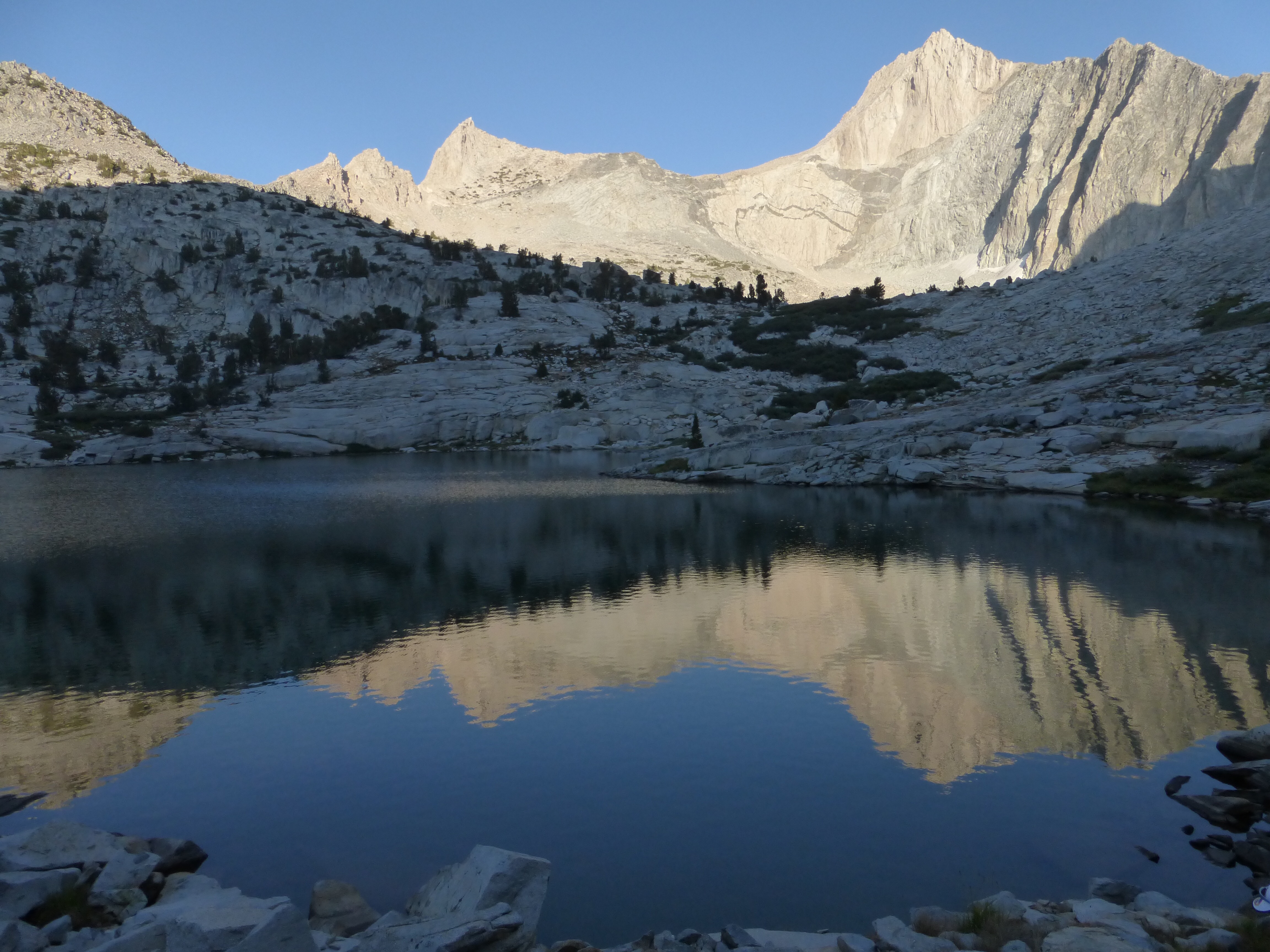 We stopped at 7:15pm and it was nice to camp with Chris and Mallory. It’s getting dark noticeably earlier and we finished up dinner and chores in the dark. This spot is a great camping spot. It must be well known because there are a lot of used camp spots around. Whew, glad today is done! 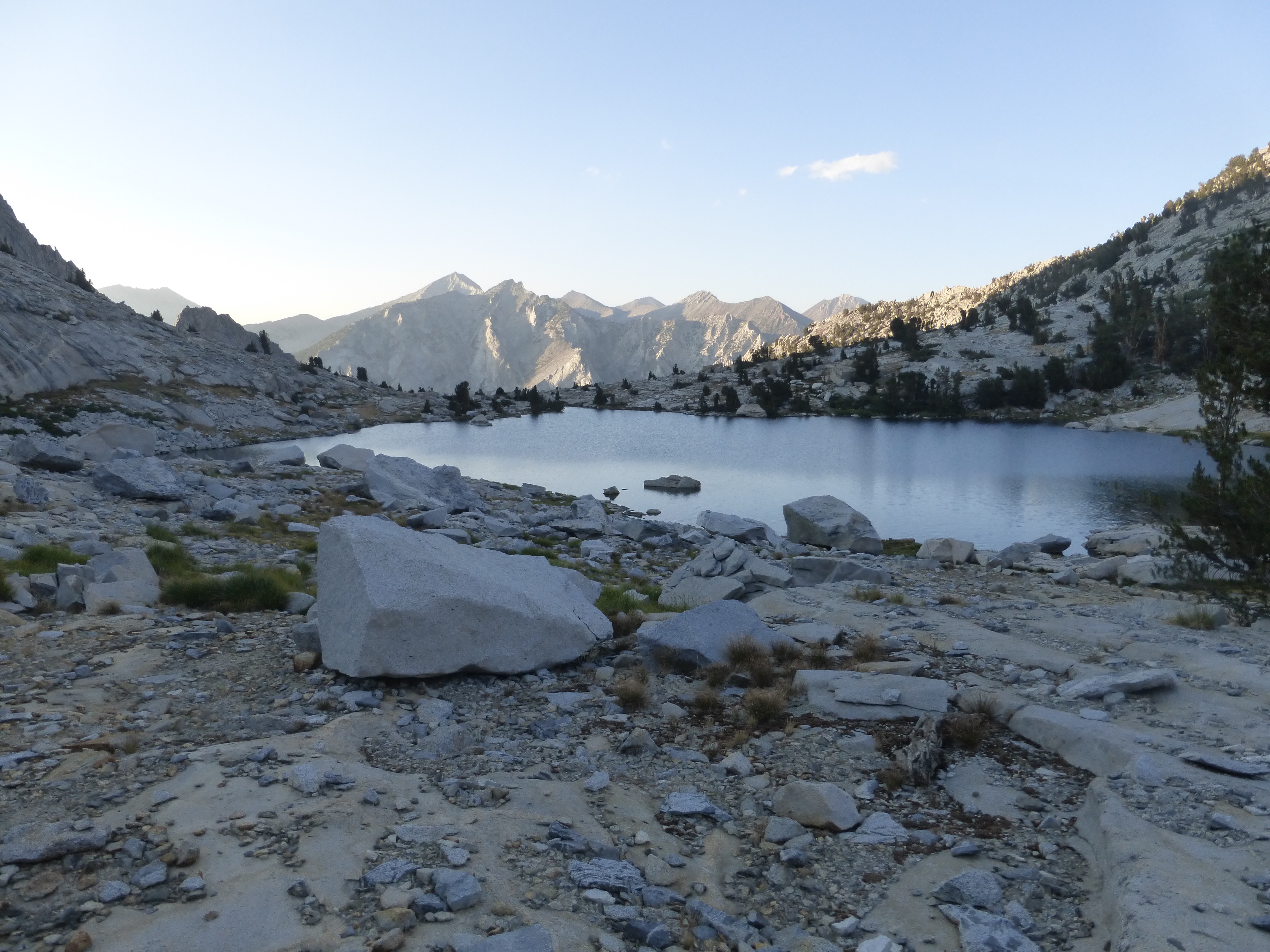 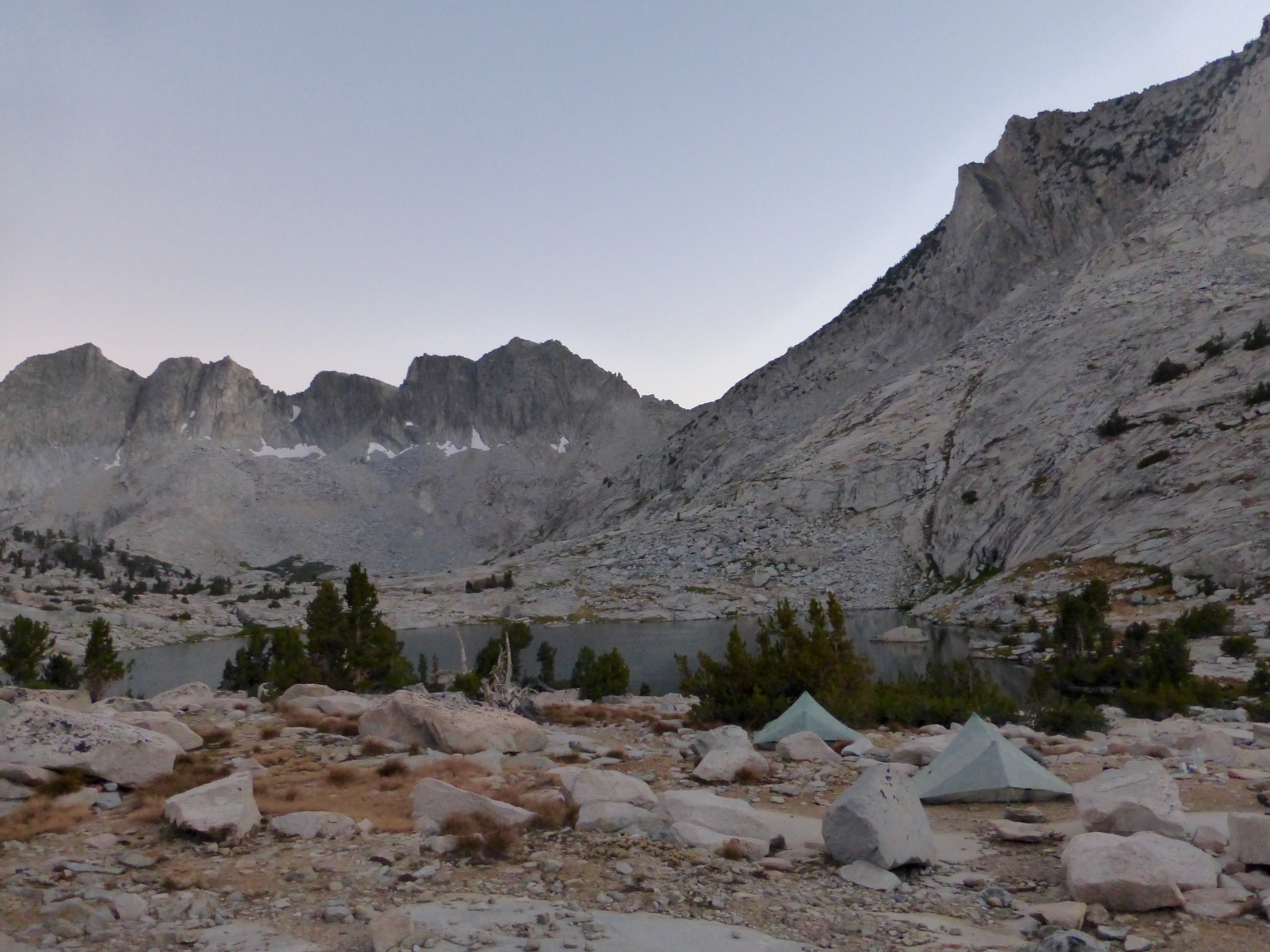 Campsite for the night looking back on what we came down (third dip from the right) and wondering if there’s a way to just come over that lower dip??