Douglas Peak Pass (11,680) was not nearly as time consuming as we anticipated, but it was 3hrs before we got to a good campsite for 3 tents on the other side. 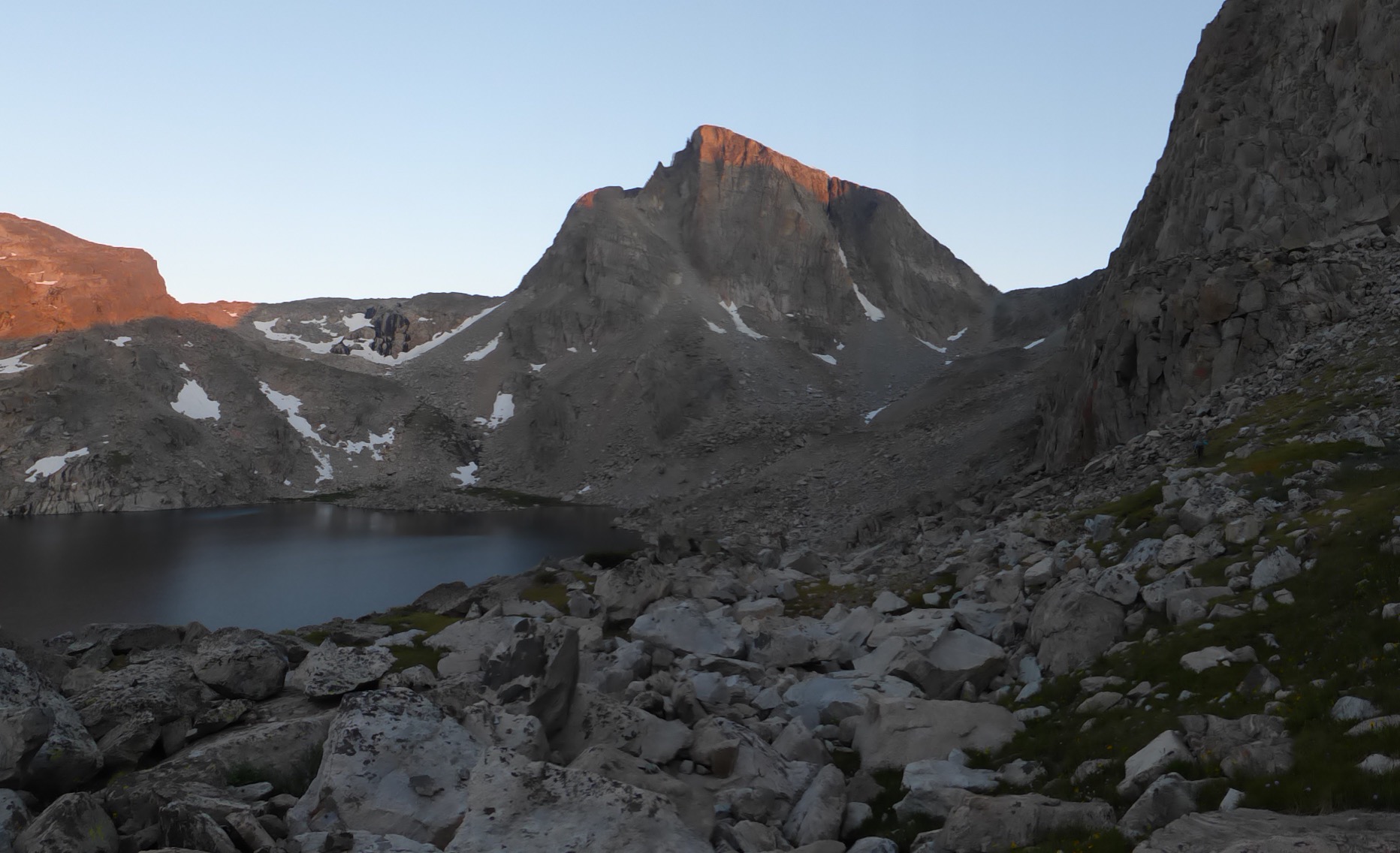 None of us have done the Dixon/Wilson route that goes around this pass, but it is tempting. At first glance, it seems going over the pass takes more time and energy, but laid out on Skurka’s comparison chart, the D/W route is actually longer with more off trail and just a bit less overall elevation change. However, take into consideration that you’re seeing less on the Skurka route, since the D/W route goes around a corner we didn’t get to venture to. Since I haven’t done the D/W route, I can’t give a true comparison. Just food for thought on that. 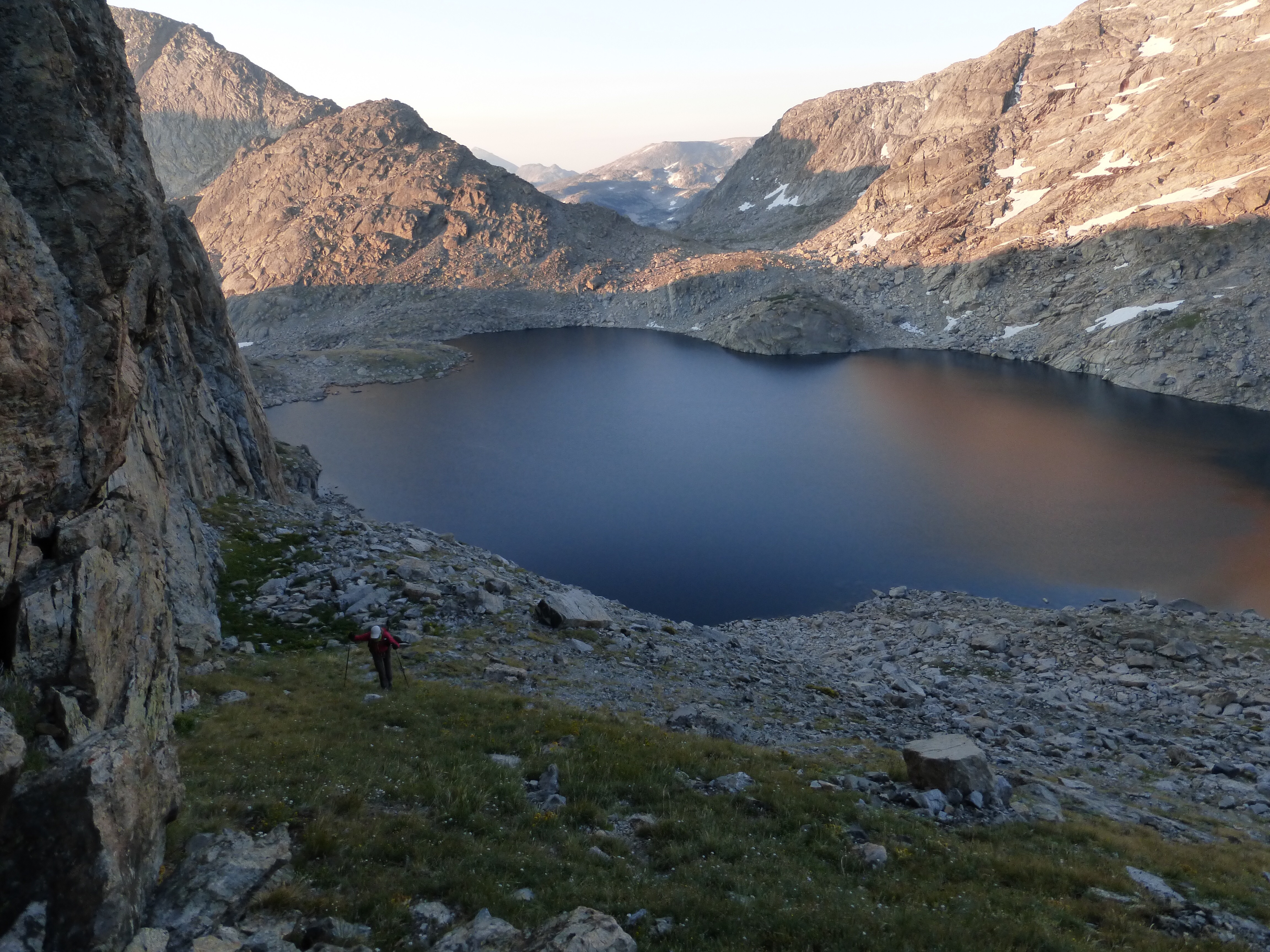 Why Not heading up Douglas Peak Pass 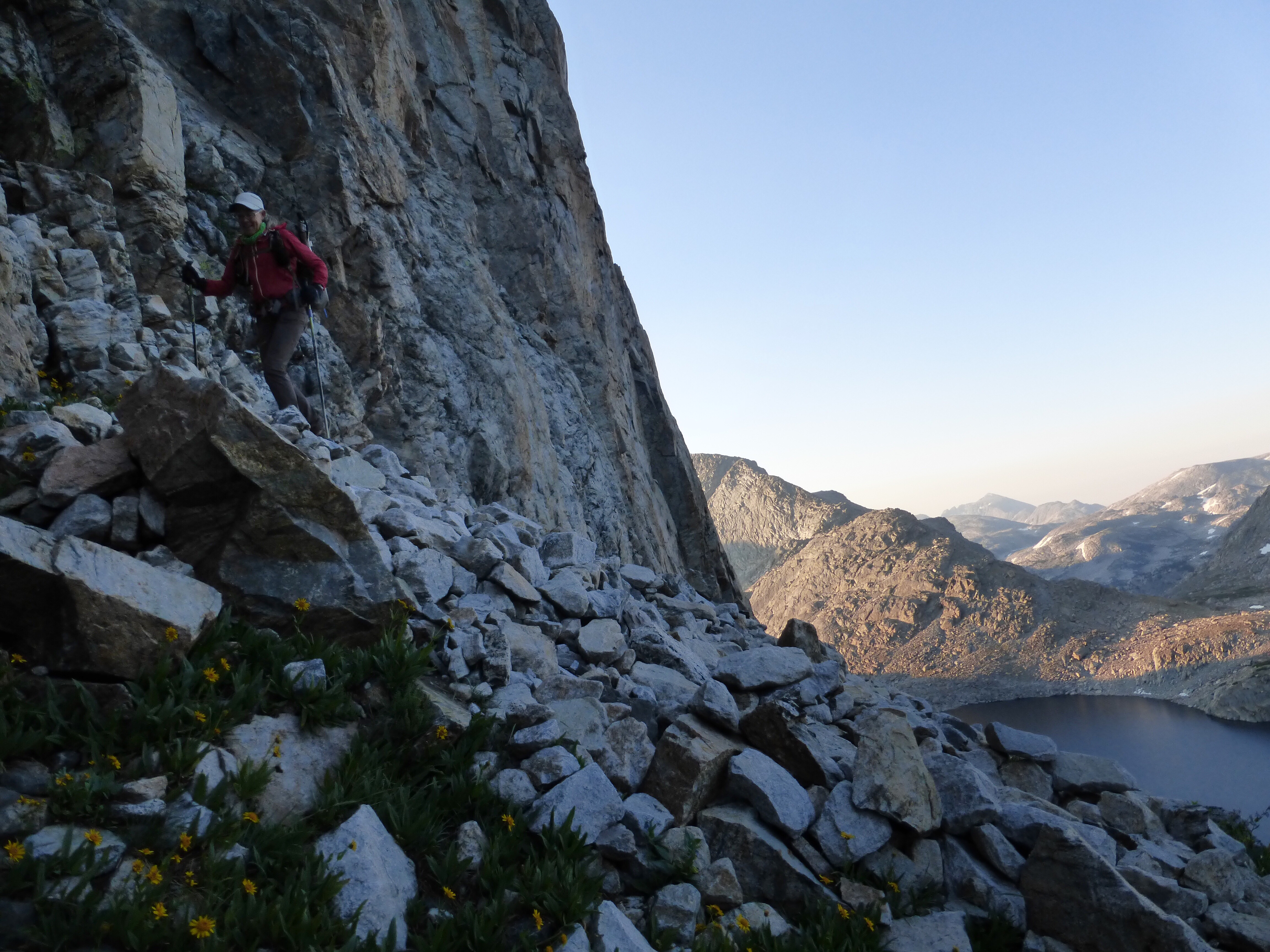 I love this shot!

The Alpine Lakes area was one I really enjoyed. We anticipated that the rock hopping would be extremely taxing and slow going, but the first two lakes weren’t bad at all and had breaks of grass and slabs to break up the monotony. The skies cleared for most of the day and we actually got to see colors as they should be! 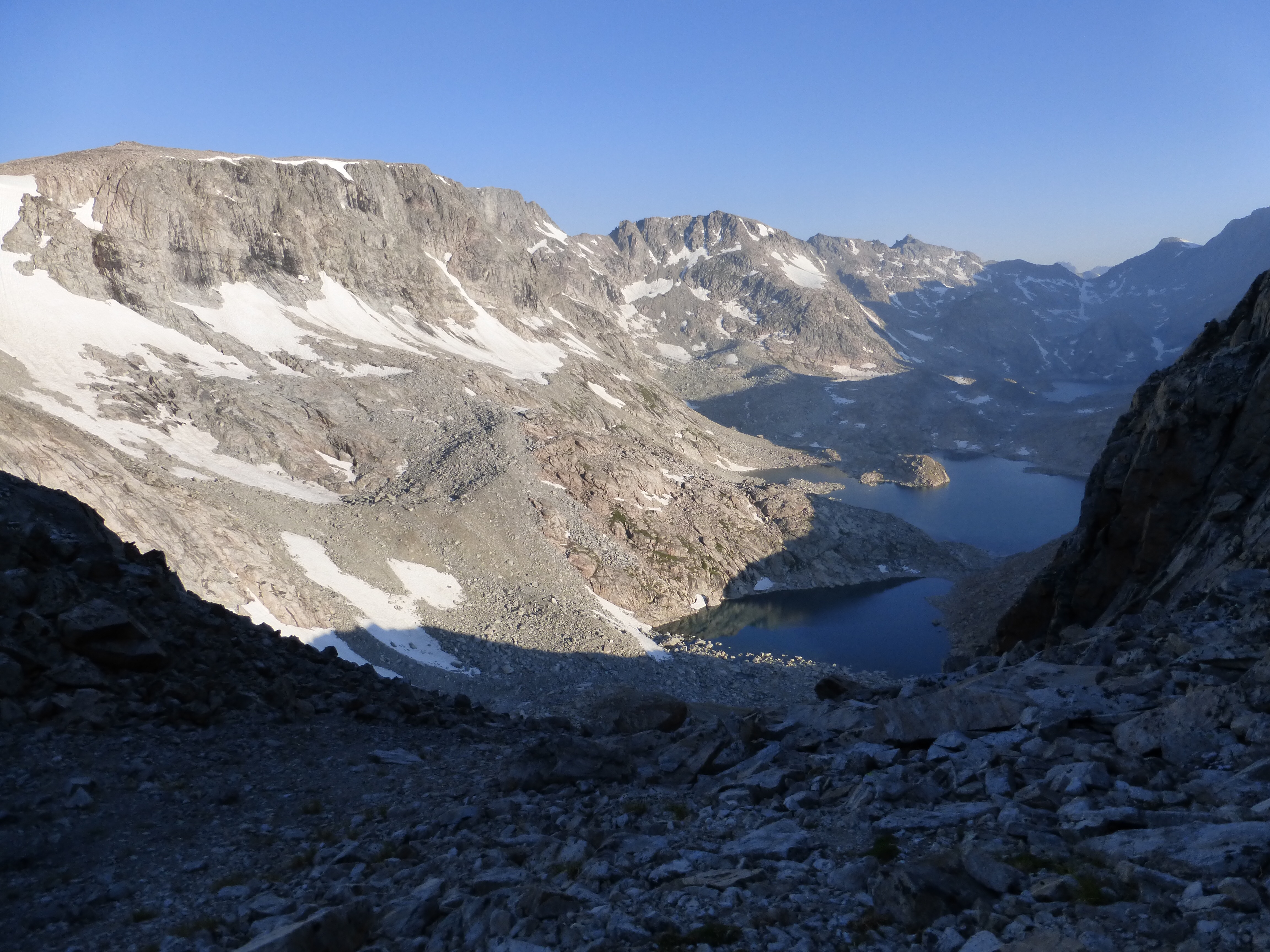 Looking down on Alpine Lakes. 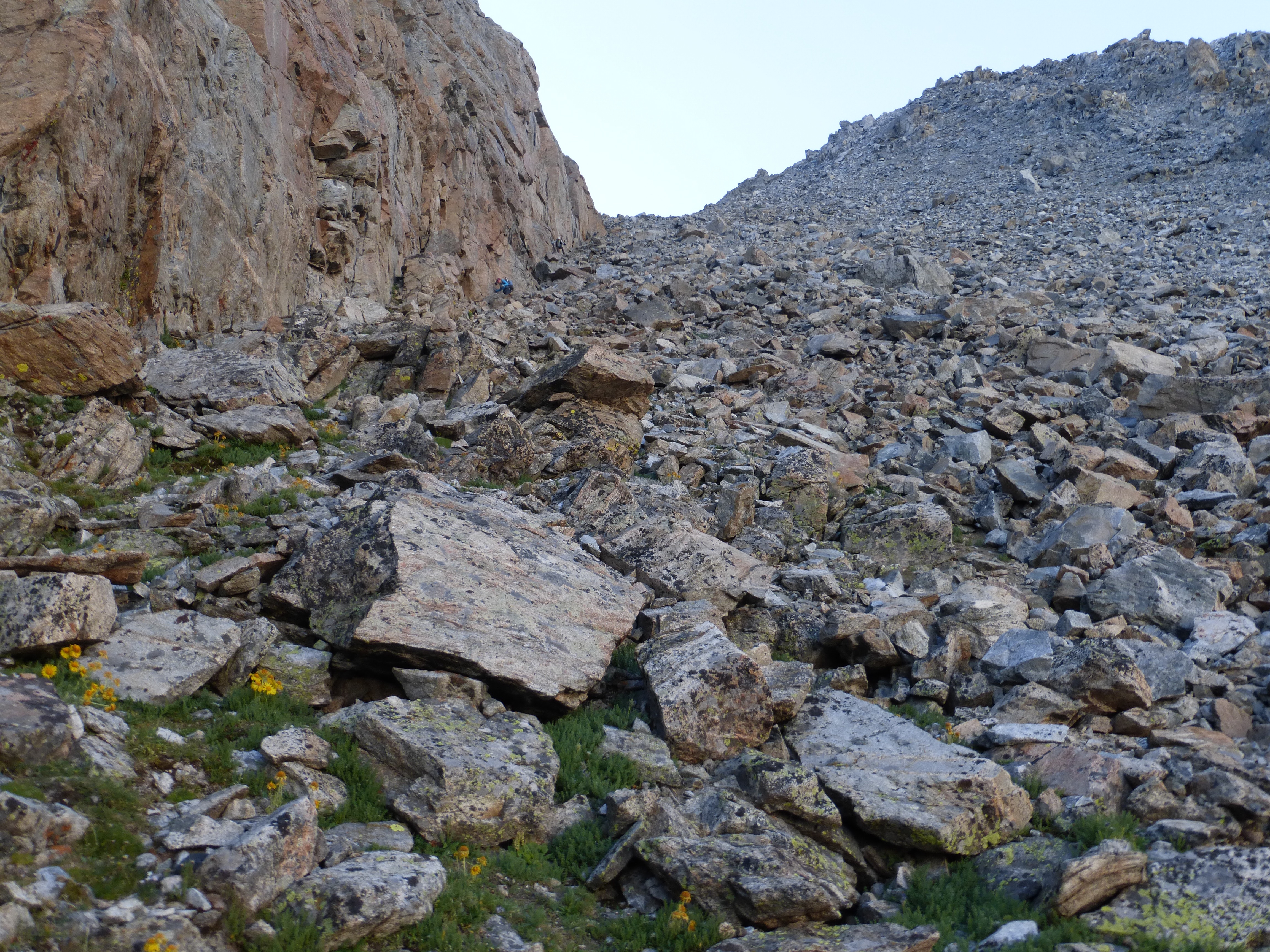 Rockin’ & Why Not coming down Douglas Peak Pass (left side)

The lakes were grand and had an effect of looking like an infinity pool at certain angles. 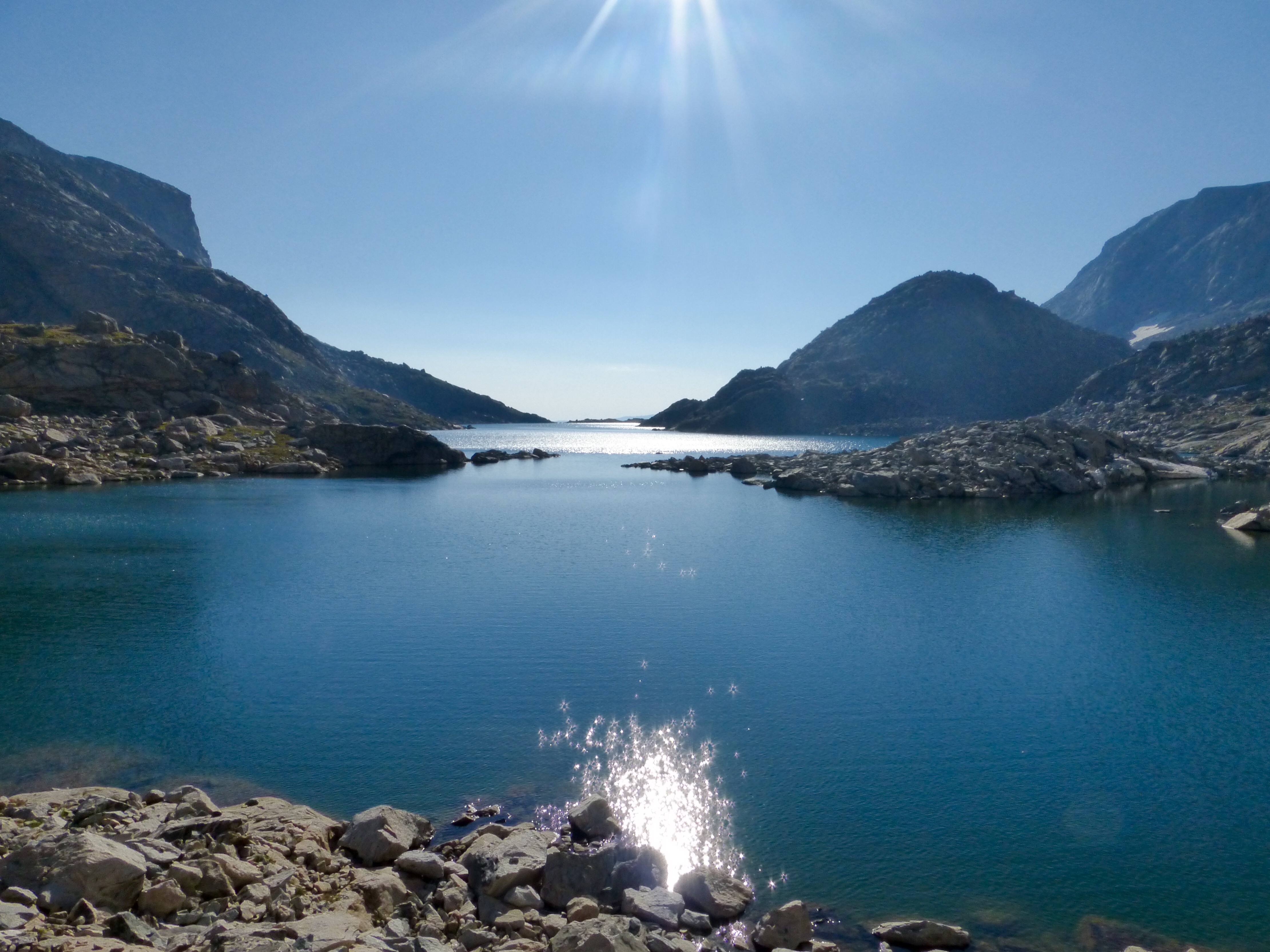 This photo does not capture the grandness of this view. 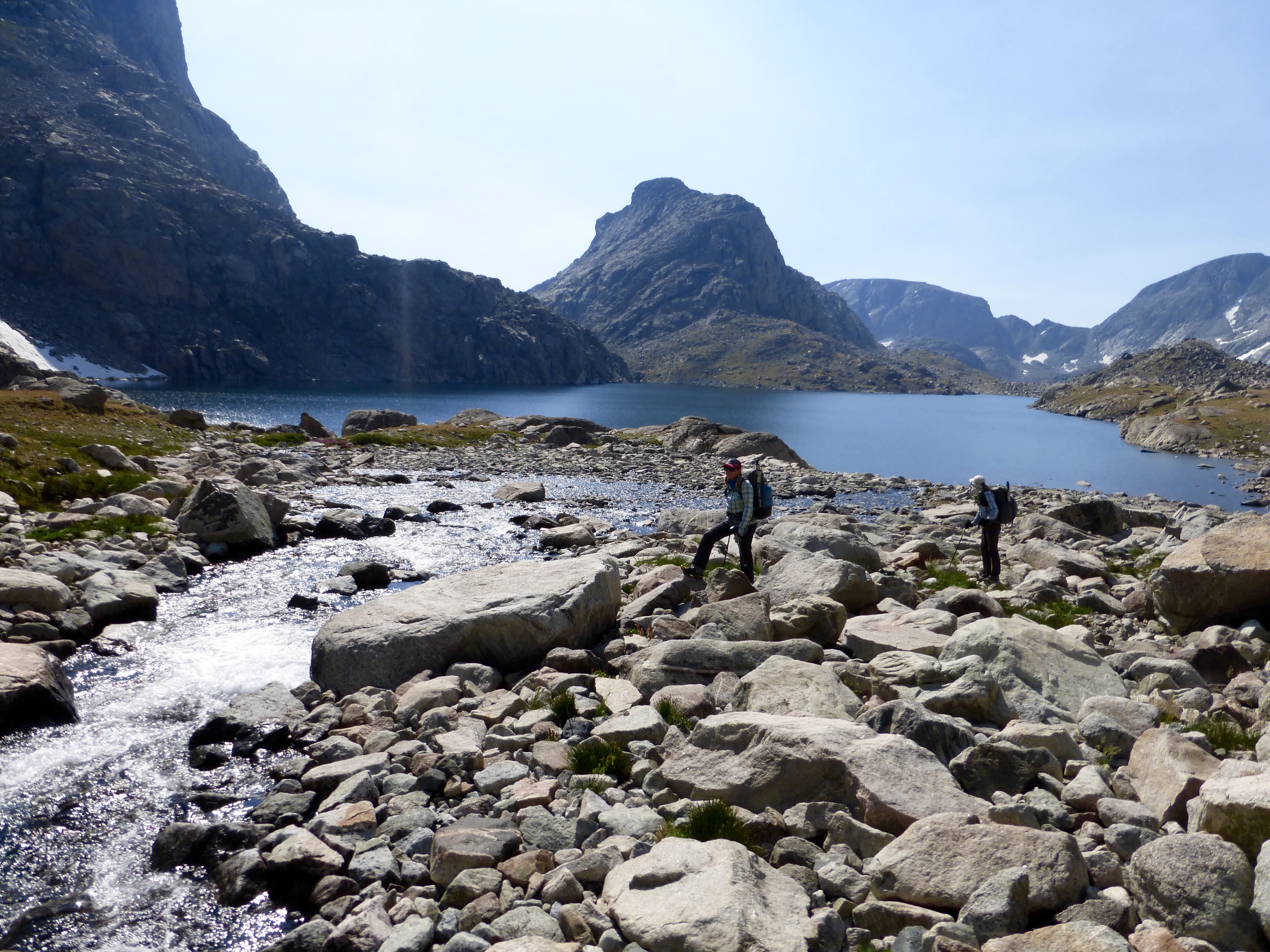 The first two lakes were great, but it was the third and final one below Alpine Lakes Pass that was the crux and quite time consuming. There were bluffs to climb over and around and just very time consuming rocks to get over. 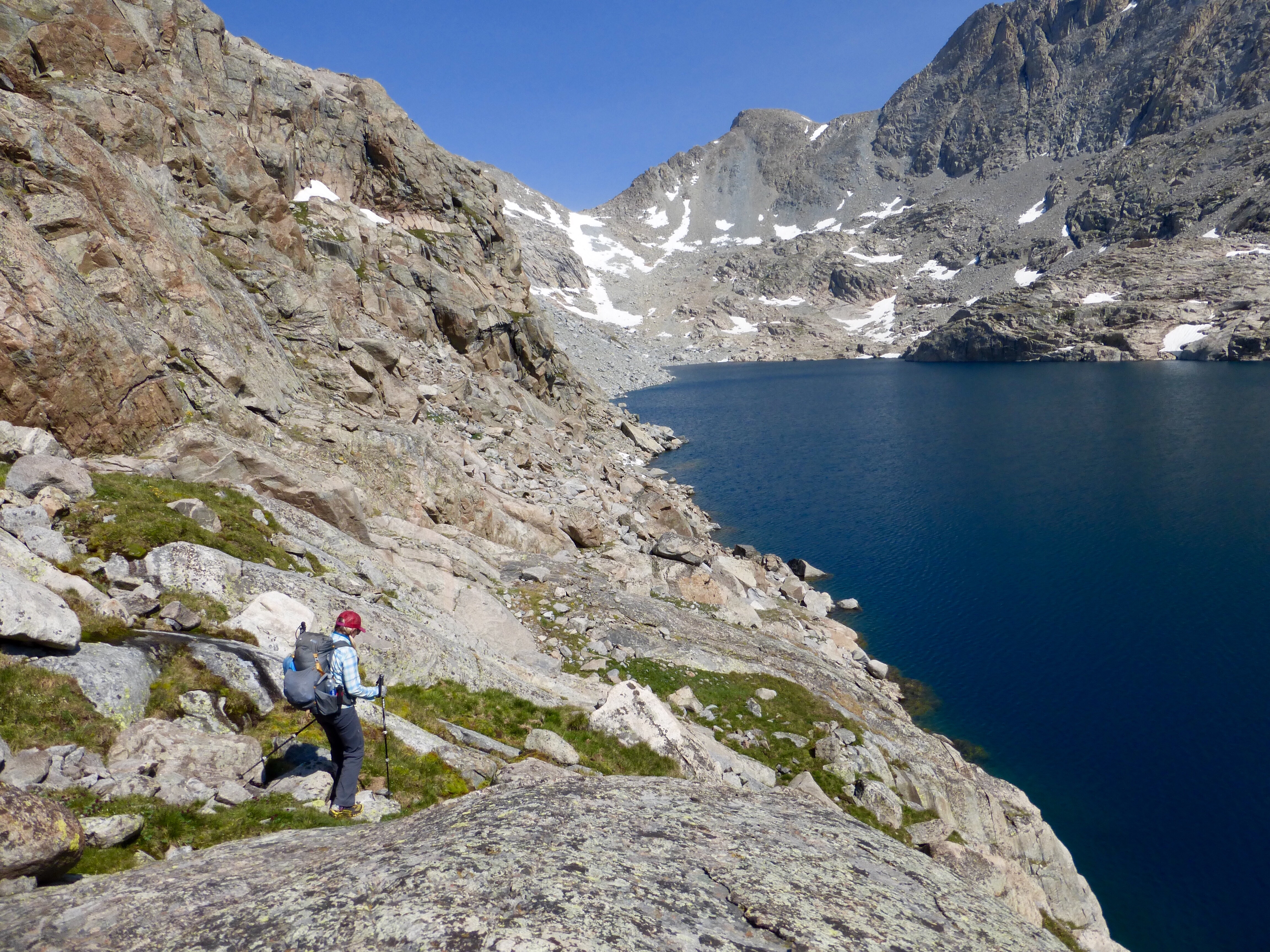 Alpine Lakes Pass looked so close, but it took a couple hours to get there.

At one point, we did look across the lake and wondered if anyone had tried the other side before because it looked like it may be doable and have fewer obstacles, but there is no way to really know from such a distance. 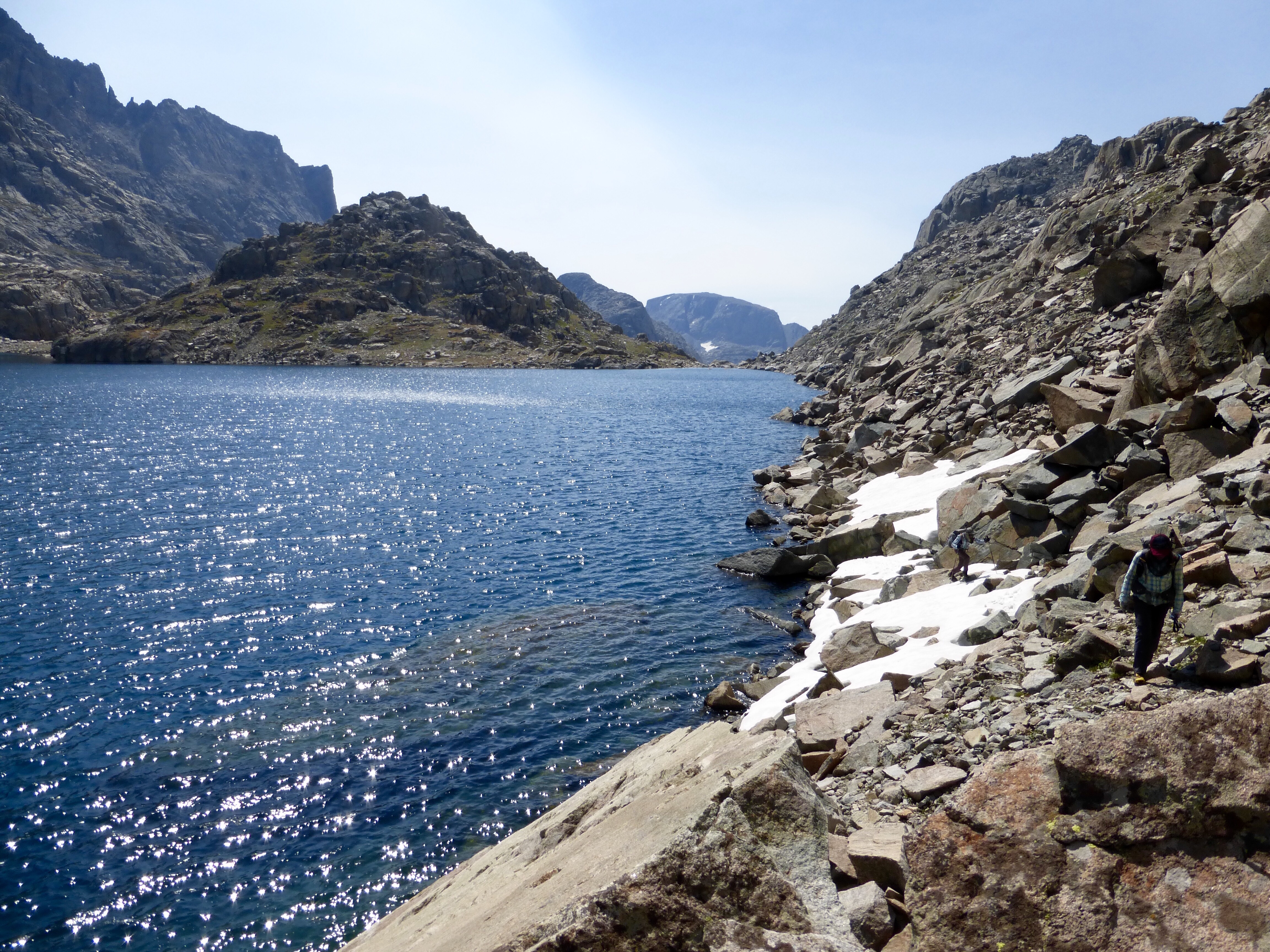 Along the side of that final lake before the pass.

Once we got past all that time consuming stuff, all that was left was the final push up to Alpine Lakes Pass. Man, what a push it was. It was about a 1,000ft climb to top out at 12,240ft. 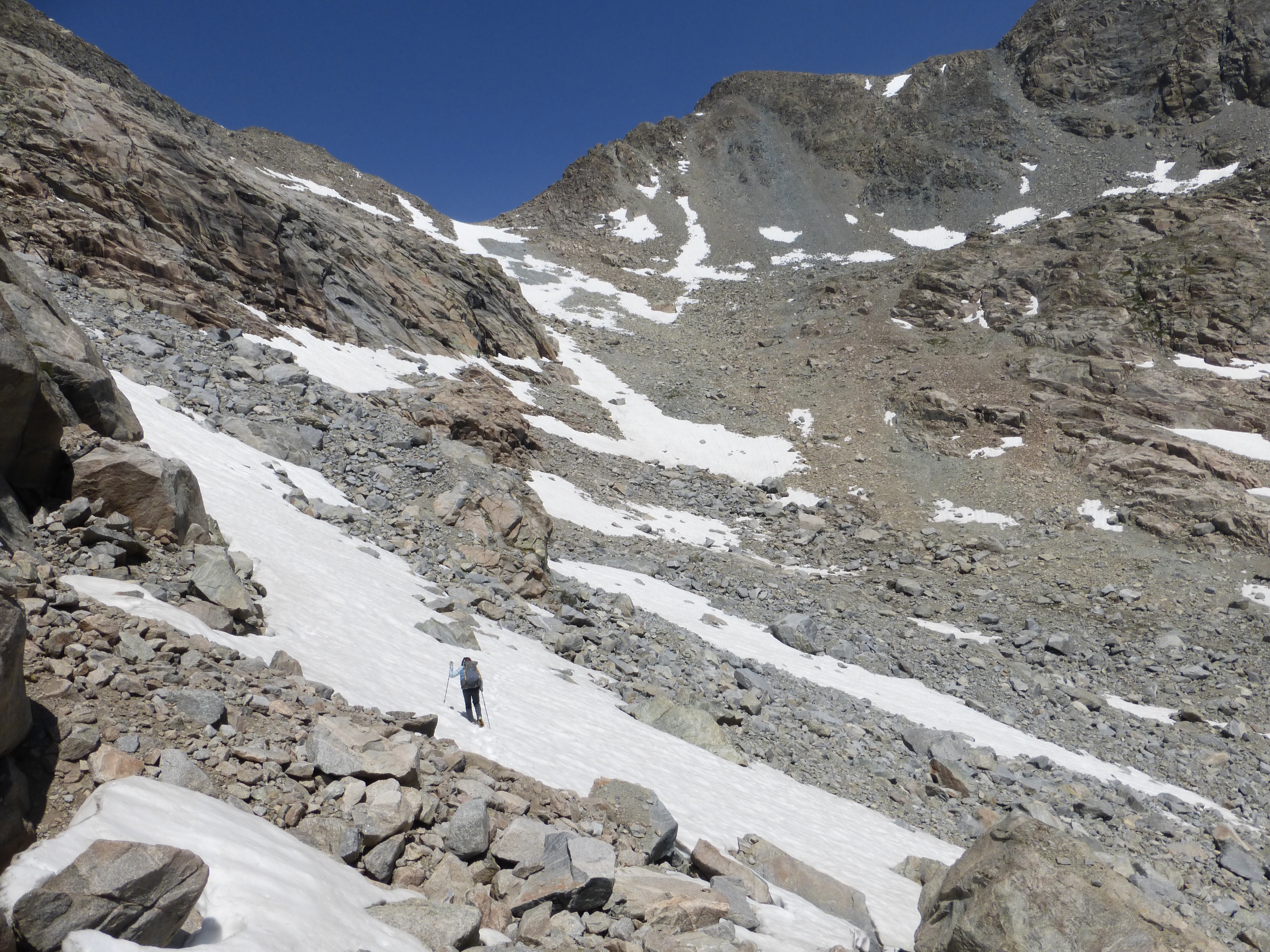 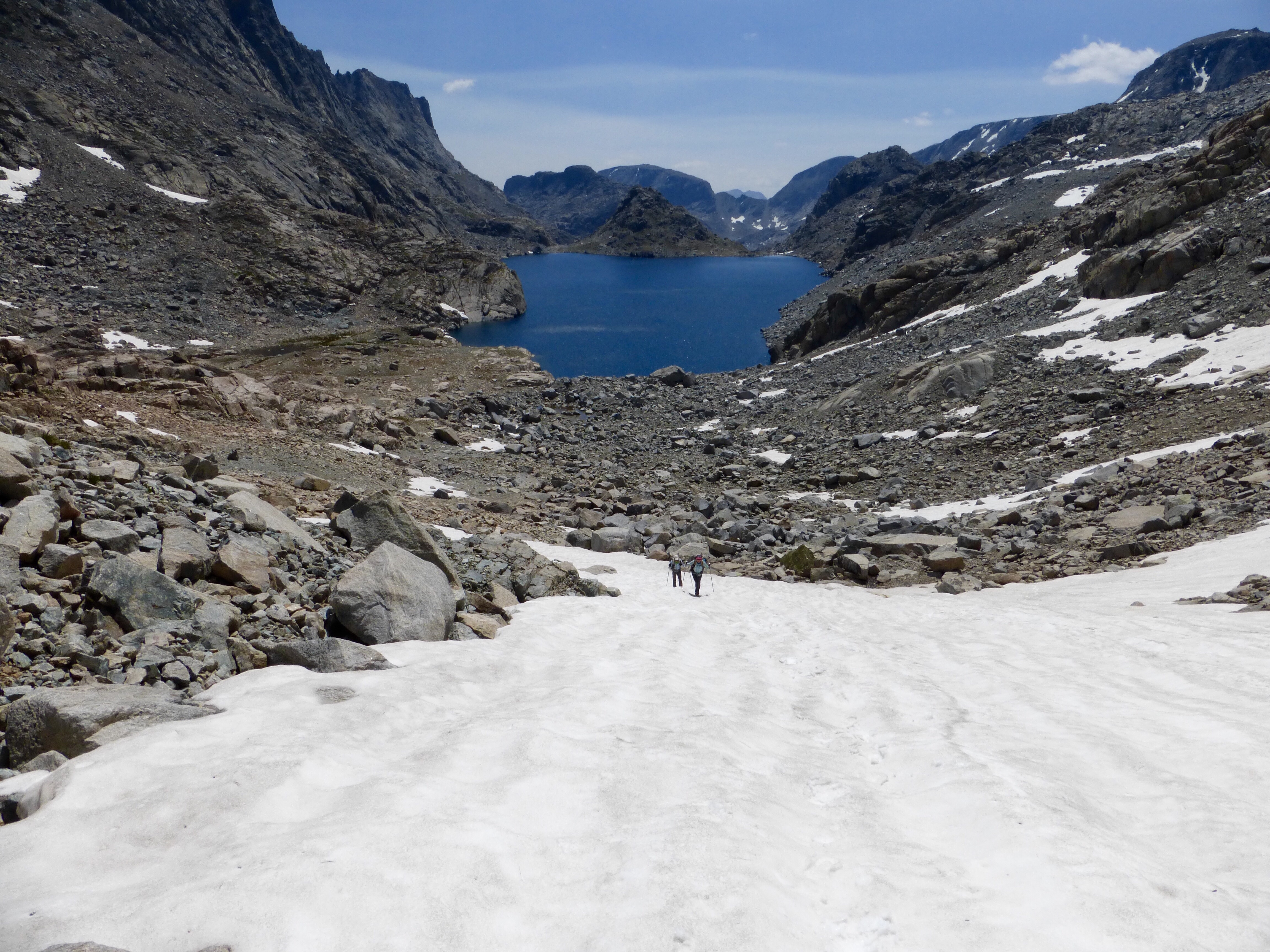 This final push was draining!

We were determined to finish this pass before lunch and it took longer than expected, so we all were running near empty and lunch on top was a great motivator! 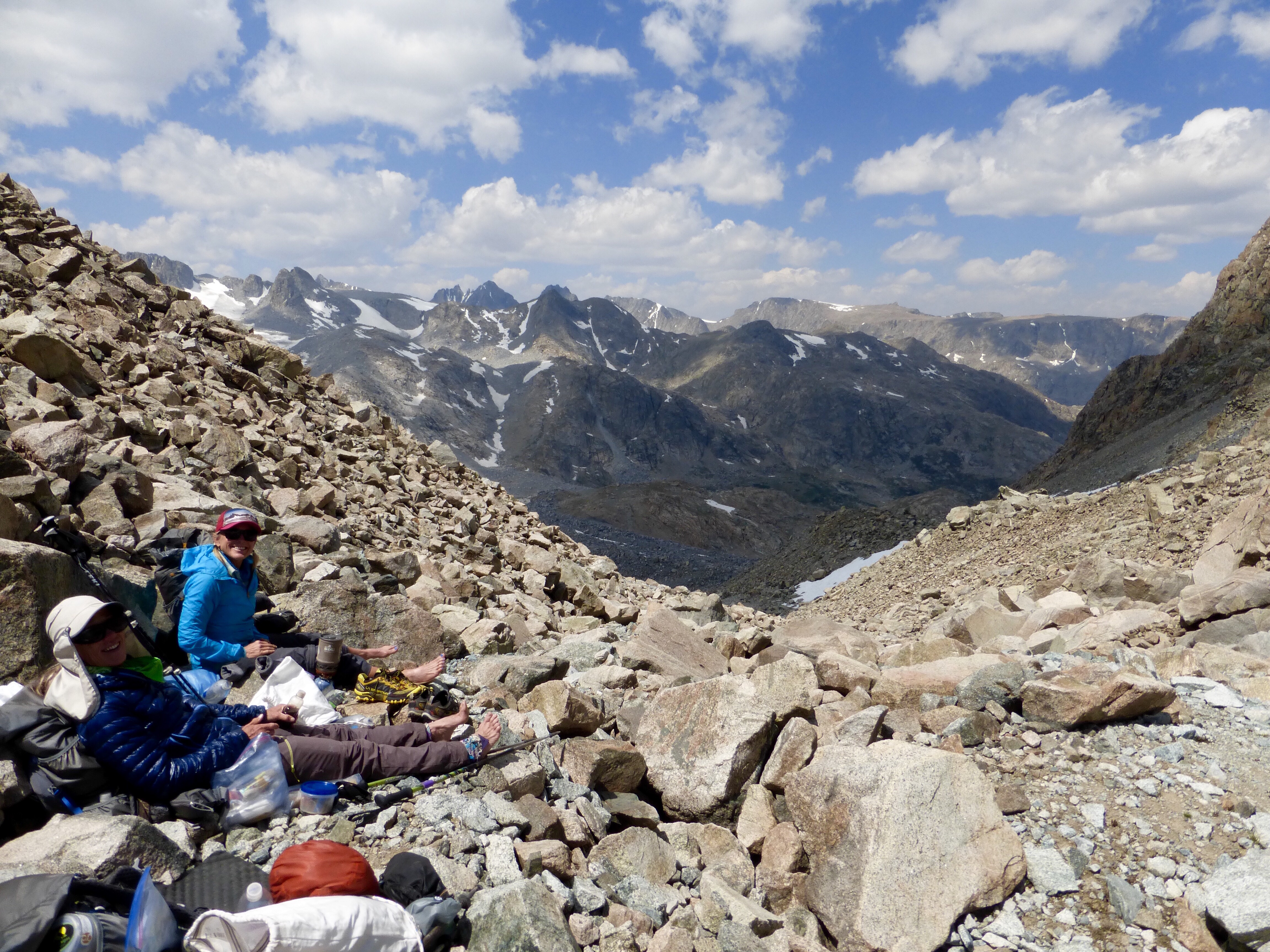 We have now entered our sixth week of hiking and much of it has been off trail on boulders and talus, which take a toll mentally and physically. Doing all this high route hiking in a row is something that takes real endurance and I’ve been really impressed by Why Not and Rockin’. They have done a great job of staying positive and humorous and it’s good to have that energy around. It’s quite inspiring to see women 20+yrs older than me kicking ass on these high routes! I still have the Kings Canyon High Basin Route (~12 days) to do right after this hike, so my mind/body isn’t there yet with thinking about being done. We’ve been going at a pace a gear lower than my normal pace with quite a few breaks, so I think that has helped keep my stamina up for all of these back to back. It will be interesting to see if I get overloaded by adding on the KCHBR, but I’m really looking forward to it.
After a leisurely lunch, we contoured down on even more talus and boulders. It was almost all day today it seemed and that wears on the mind and body. I feel like today was the most consistent time we’ve spent on rock all summer on these high routes. On the way down, we got a view of Knife Point Glacier and Indian Pass (on the D/W route), which was pretty cool! 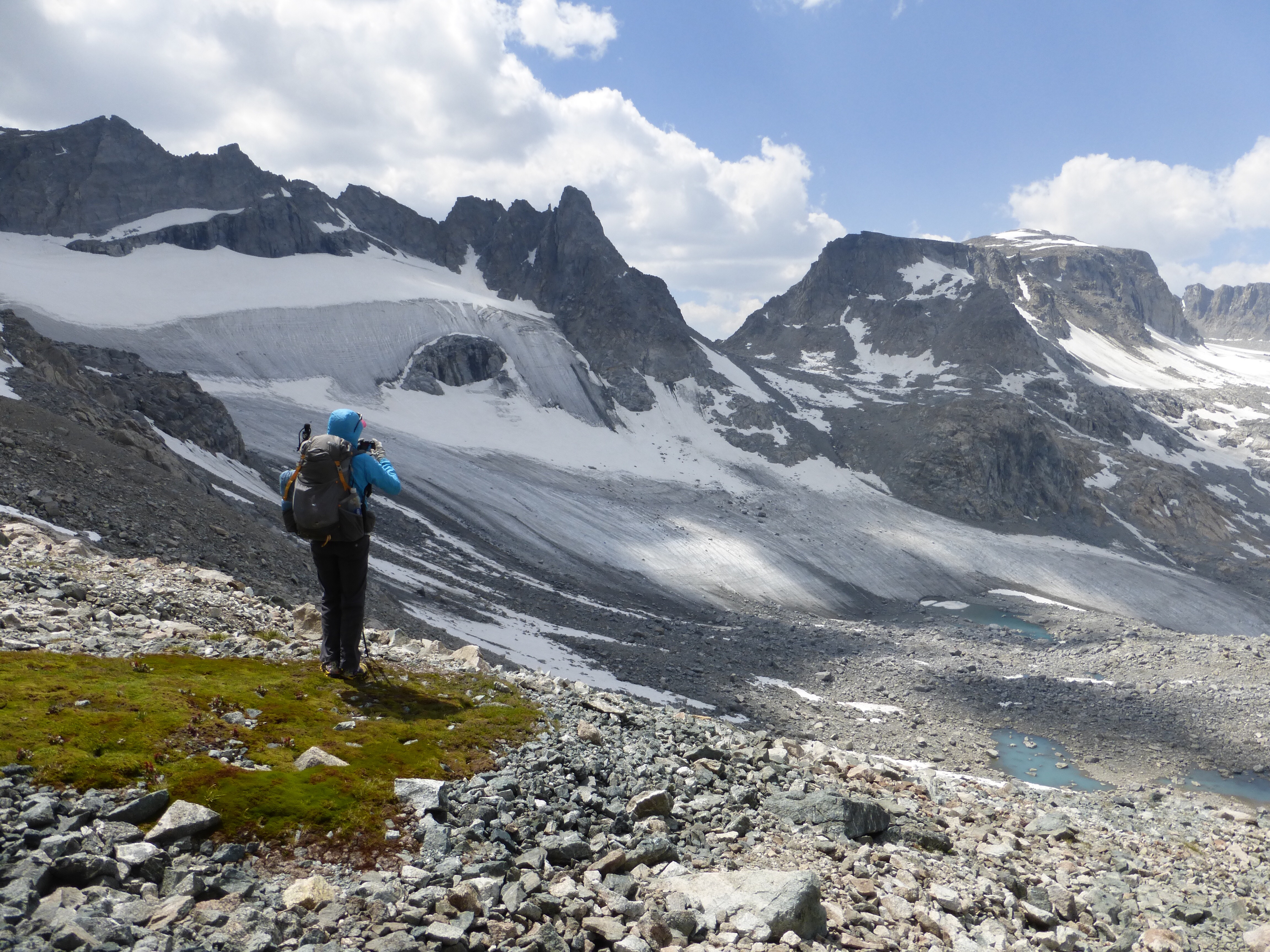 A hiker (trail name Yoda) was coming from that direction and we intersected right where the two routes split for the remainder of the hike. The D/W route heads over Indian Pass to the incredible Titcomb Basin, which both Why Not and Rockin’ have done and are quite fond of. The only way to include Titcomb Basin on our route would require Bonney Pass, which Skurka found quite sketchy, so he reluctantly had to leave it off his main route. Someday, I’ll need to come back and hike Dixon and Wilson’s route because the Winds are great and there is no way seemingly to rank one over another and it’s all just great. Anyway, it was fun to talk to Yoda and even give him possible route options if he’s looking to do some of the stretches we had done that aren’t on his route. He’s the only other person we’ve met doing a high route.
From there, we dropped into a nice and easy canyon for a couple miles. The run-off from Knife Point Glacier (and other side streams) eventually became a significant creek that we forded. It was quite cold and deep in spots since it was the end of the day. It was the first time this whole hike I’ve had to get my feet wet! 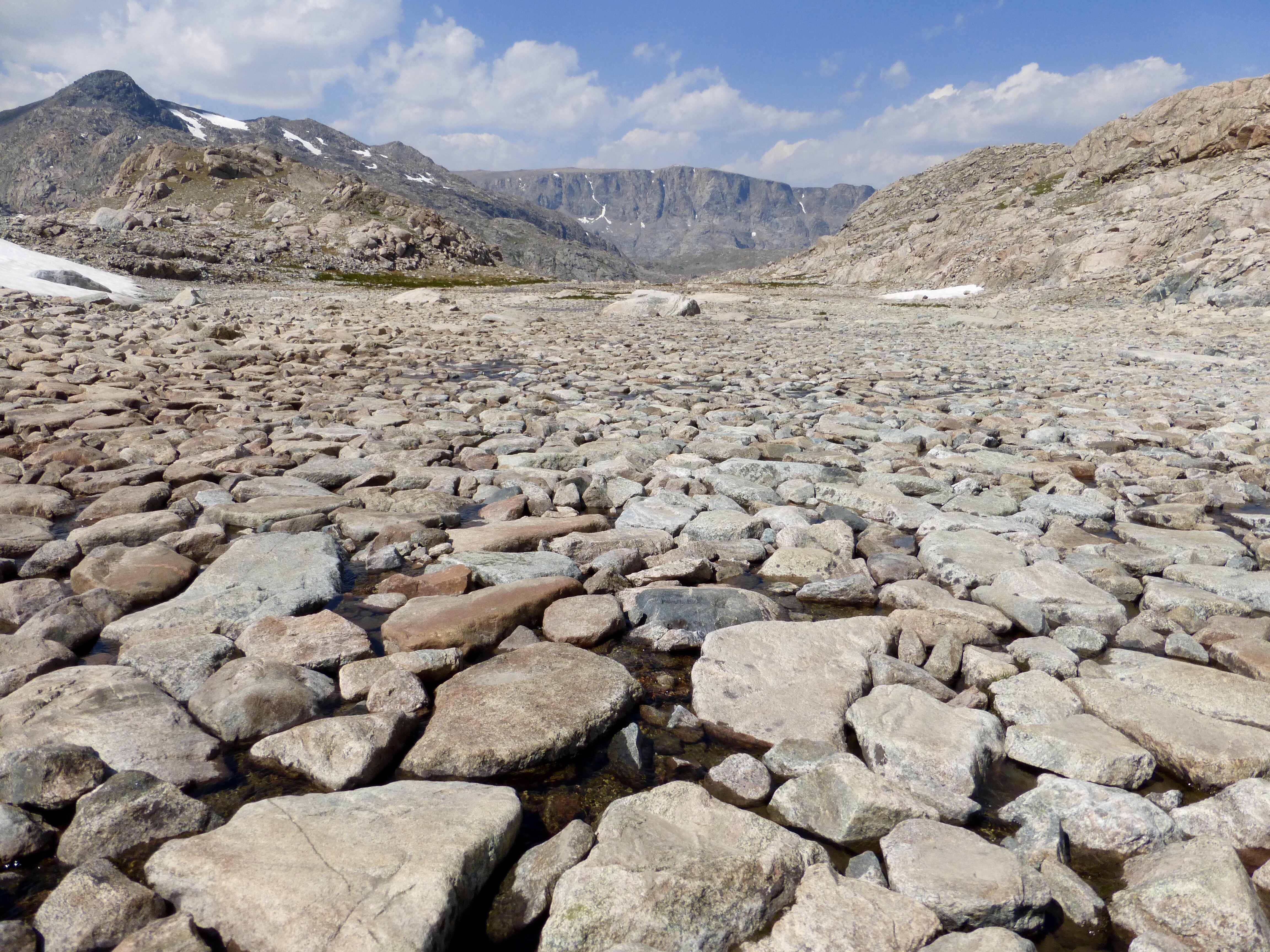 Unique walking down canyon with water running under the flat talus. 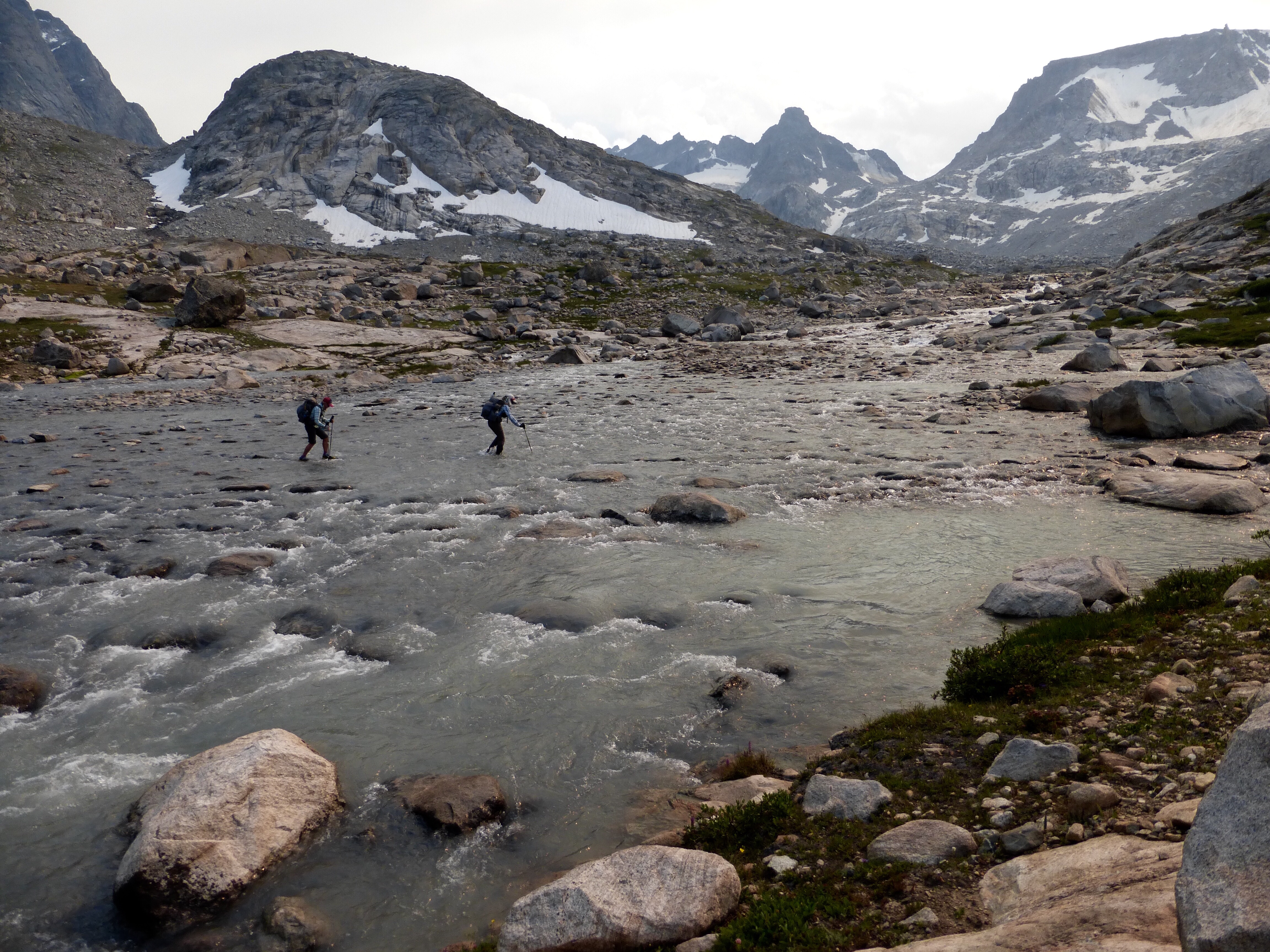 We made a turn to climb up over a grassy area that eventually dropped us into the canyon we are camped in now. It also had a major glacial creek (North Fork Bull Lake) running down the valley that was quite a sight. Just as we turned into this canyon, the haze from the fire returned. Winds must have shifted directions, and that was a bummer. 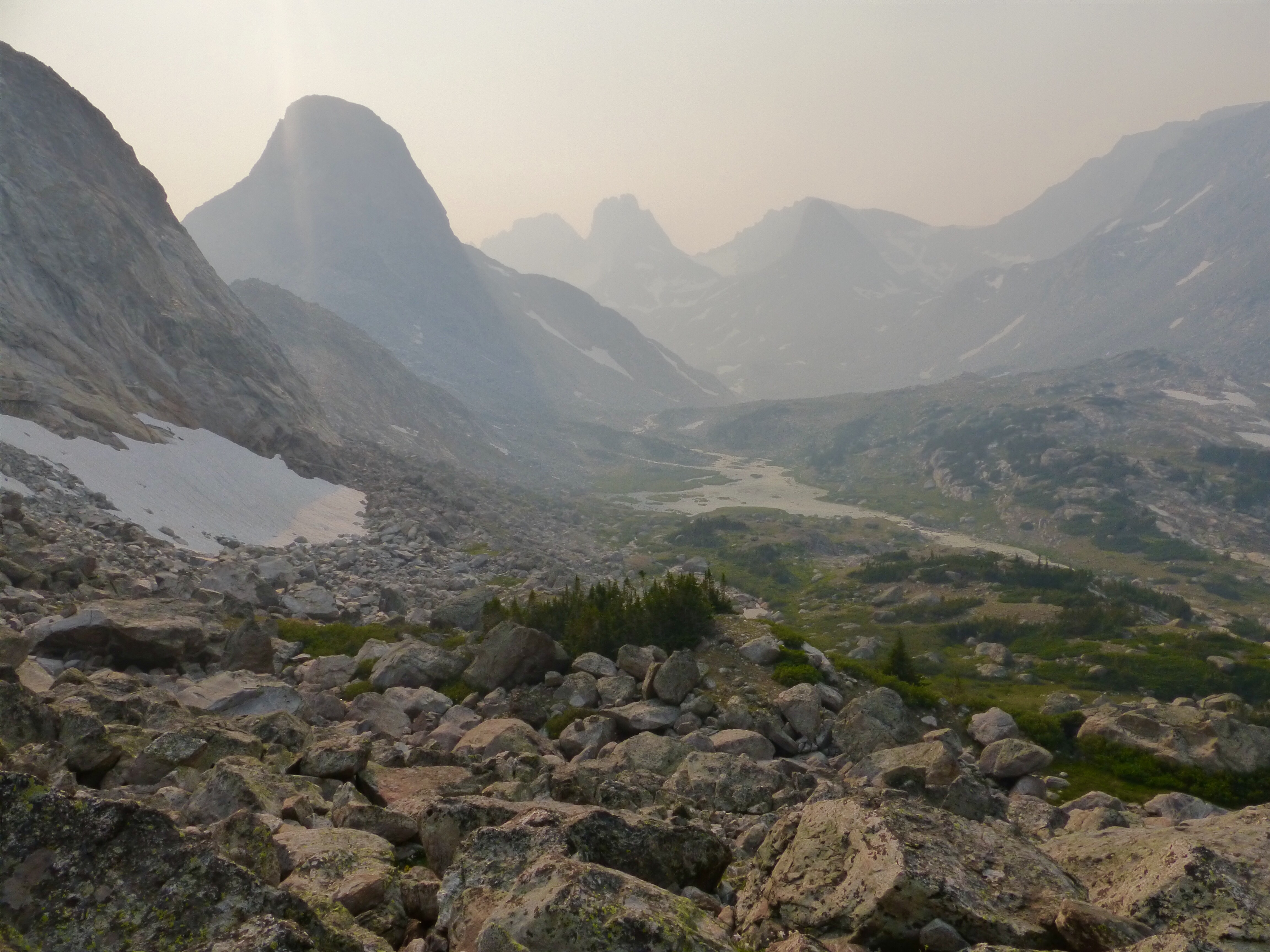 We had to ford this creek as well and it was quite swollen, so we hiked upstream and were able to cross thankfully. Sometimes these glacial outlets can be so swollen late in the day that there was a chance we’d have to wait til morning when it would be much lower. We got across and got to have dinner a bit away from where we ended up camping with quite a grand view that Skurka describes as a Sound of Music setting. 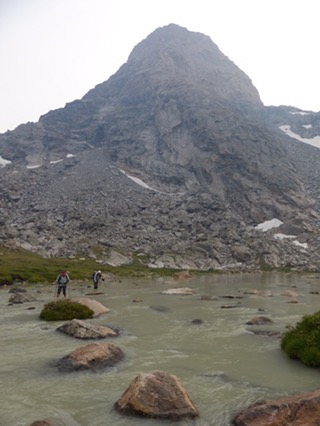 Final ford of the day. 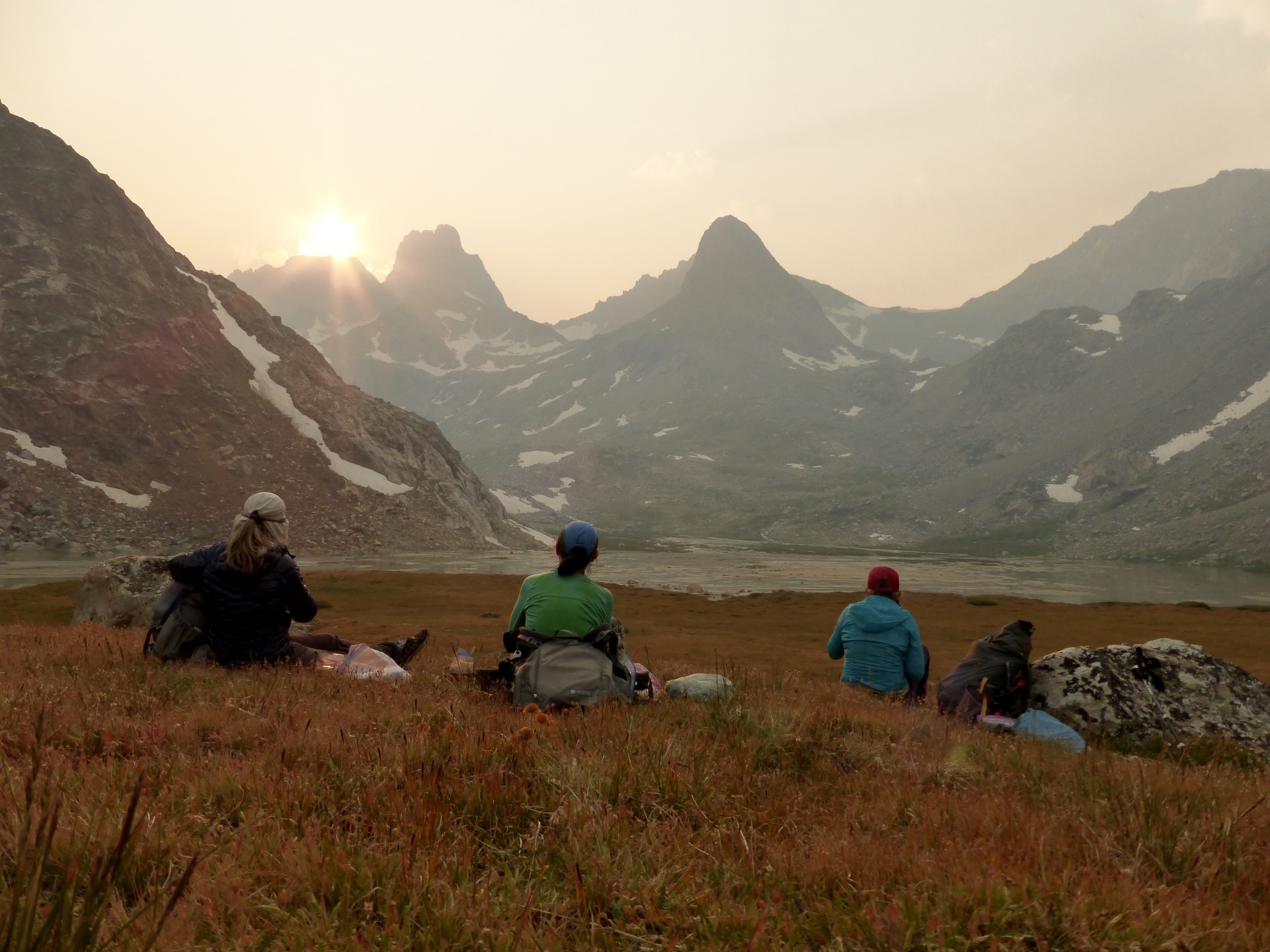 Dinner in front of what we think is Turret Peak and Mt Helen.

Tomorrow morning is Blaurock Pass, the steepest pass on the trail. It looks pretty ominous from down here for sure. 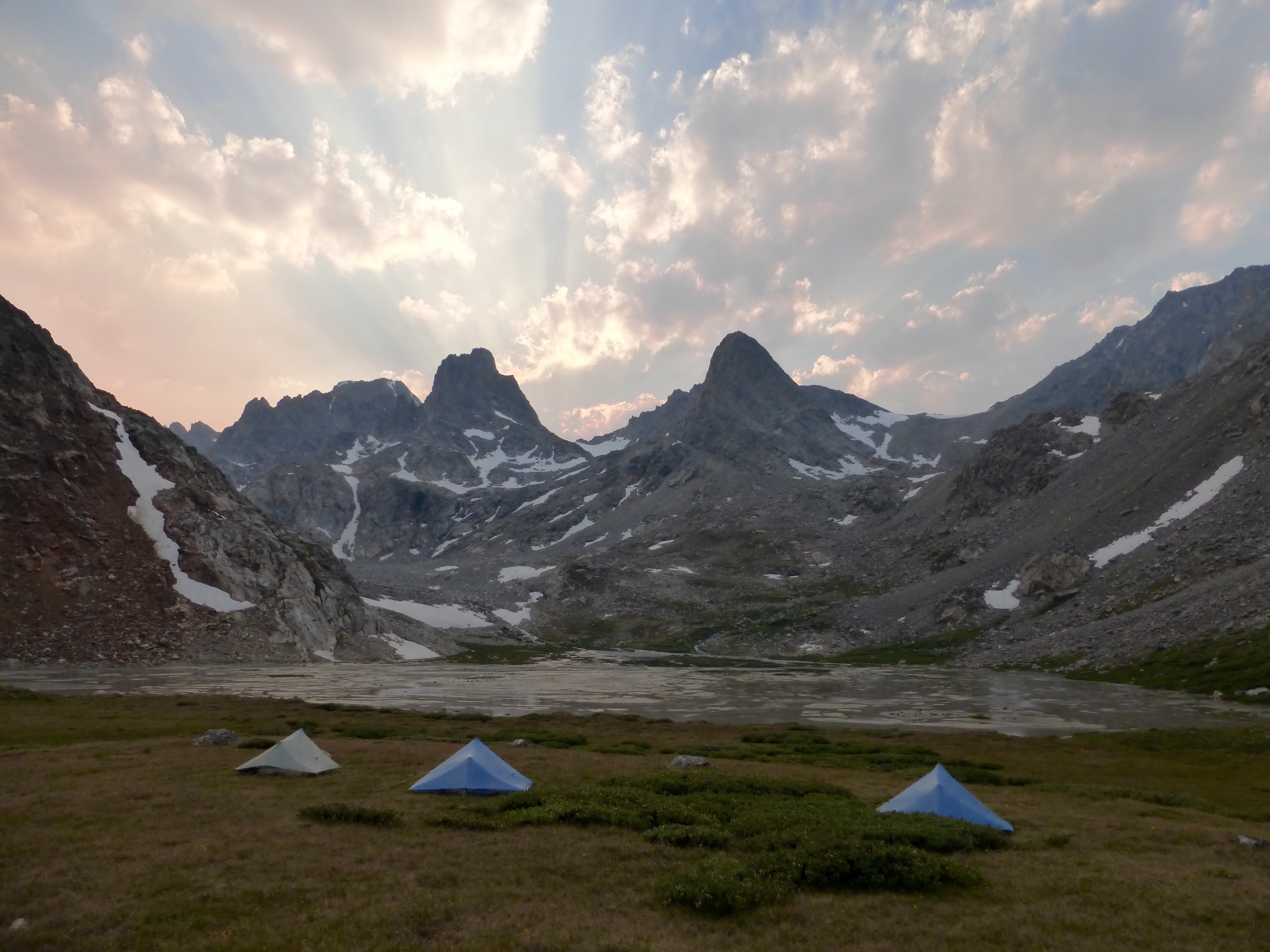 Campsite with Blaurock Pass, the dip on the right.

I do want to give a warning about these high routes, particularly this one. Looking at these photos make it quite alluring, but we are all putting in quite the effort to pull out these days. This is, by no means, a relaxing trip. The Winds don’t have a ton of entry points and that means you either do a long food carry and/or push bigger days to be able to carry less. Either way, you are working hard and pretty dang tired. We have the added toll of having done two other hikes just before this. I want to give a clear warning for those thinking of doing this, or any other high route. They are a ton of W-O-R-K!