We got our usual 6am start and headed down 2,200ft over 2mi to Woods Creek. It was steep, but most of it was easy hiking on rock slabs. In the distance, we could see the valley we were going to head up later. 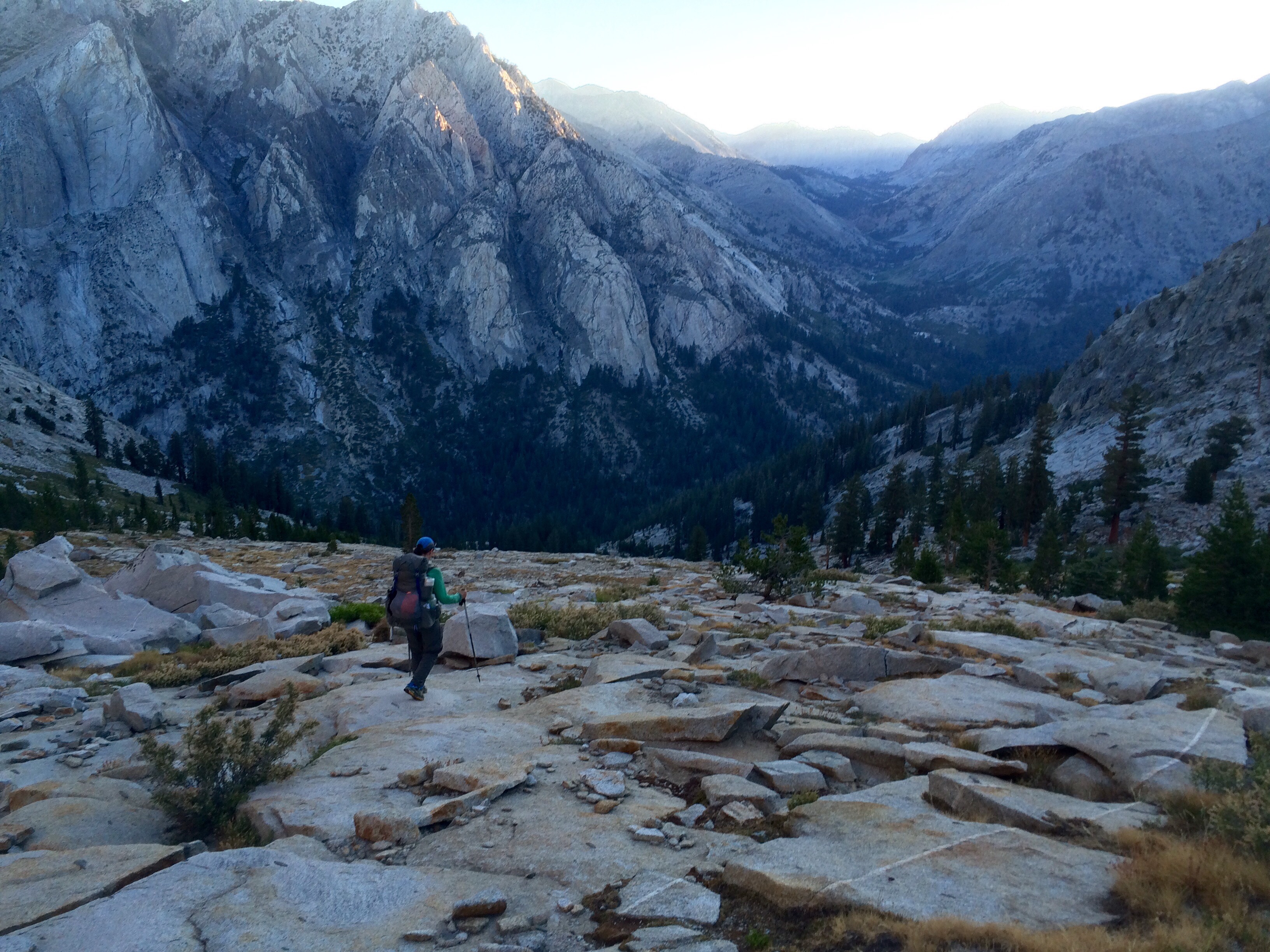 Once we hit Woods Creek, we were on that trail for a mile or so and then the JMT for 2.5mi. It was mid morning when we hit the JMT and we stopped for E’s breakfast at White Fork Creek. There was a shaded cove of thin trees next to the creek that we sat in. While we were there, it was like watching rush hour traffic go by. Countless hikers walked right by us going both ways on the the JMT. Almost all were so focused on the trail and crossing the creek that they didn’t even notice us right there. We were bemused to see it happen one after another. I commented that maybe it’s like the movie Beetlejuice and that we actually died last night on King Col and are stuck as ghosts. That’s why no one could see us. We did have one kid say hi, but I reasoned that he’s just like that kid from the Sixth Sense movie that can see dead people…then we remembered that a guy packing up camp near Woods Creek said good morning and my whole theory was shot. Still, it seemed like something happened because we flew through today and went much further than we expected.

So back to the hiking. We got off the JMT at White Fork and headed up canyon to White Fork Pass. We expected this to be possibly time consuming and arduous, but it was surprisingly smooth going walking up the creek. 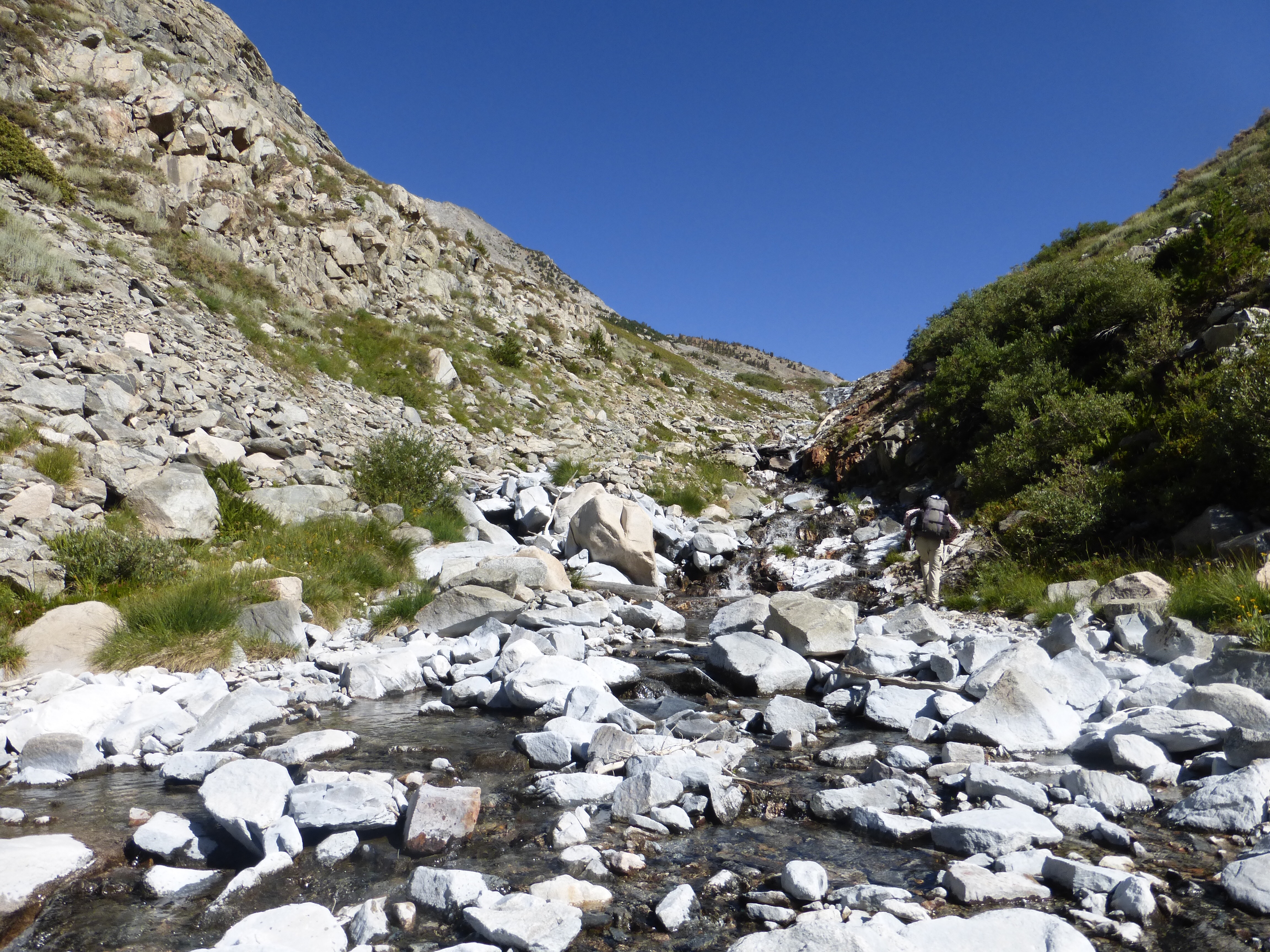 I was sluggish as we were heading up and that sometimes happens if I take an extended break and lose momentum. The sun was pretty hot, so I reached back for my umbrella to put up and maybe help boost me a bit. That’s when I realized I didn’t have my umbrella! How do I lose an umbrella!? I could have sworn I had it in my tent when I packed up this morning, ugh!

We agreed at lunch to look at the photos on E’s phone to pinpoint where I might have lost it. When we looked, E found a photo taken this morning (first photo in this post), that when zoomed in, showed the umbrella partially falling out of a hole in the bottom of my pack I didn’t know I had! Apparently, last night when I was scooting down King Col, I tore a hole in the bottom of my side pocket just big enough for the umbrella to fall out. Ridiculous that I didn’t notice something that large falling out behind me, but we were going down rock steeply and in and out of willows at times.

It does make sense because twice this morning, I felt something hit the back of my calf and I figured I somehow hit myself with my hiking pole. Nope, it was the umbrella falling out, ugh! Our only hope is that Chris and Mallory will see it, but that’s very slim on the wide open section we were on. Dang, it’s gone. It’s a luxury item, but I never want to leave without it now that I’ve started using one. It’s great for both sun and rain. I’m definitely getting another one for the Wonderland Trail up in Washington that I’ll be doing after the KCHBR. So for the record, this one does count as a loss, which I lose at least one major thing each trail, but this one wasn’t really my fault. It was just really random.

It was 3,800ft up from Woods Creek to the top of White Fork Pass. That pass was pretty straight forward as we just walked straight up a steep gravelly rocky sand dune type of terrain. 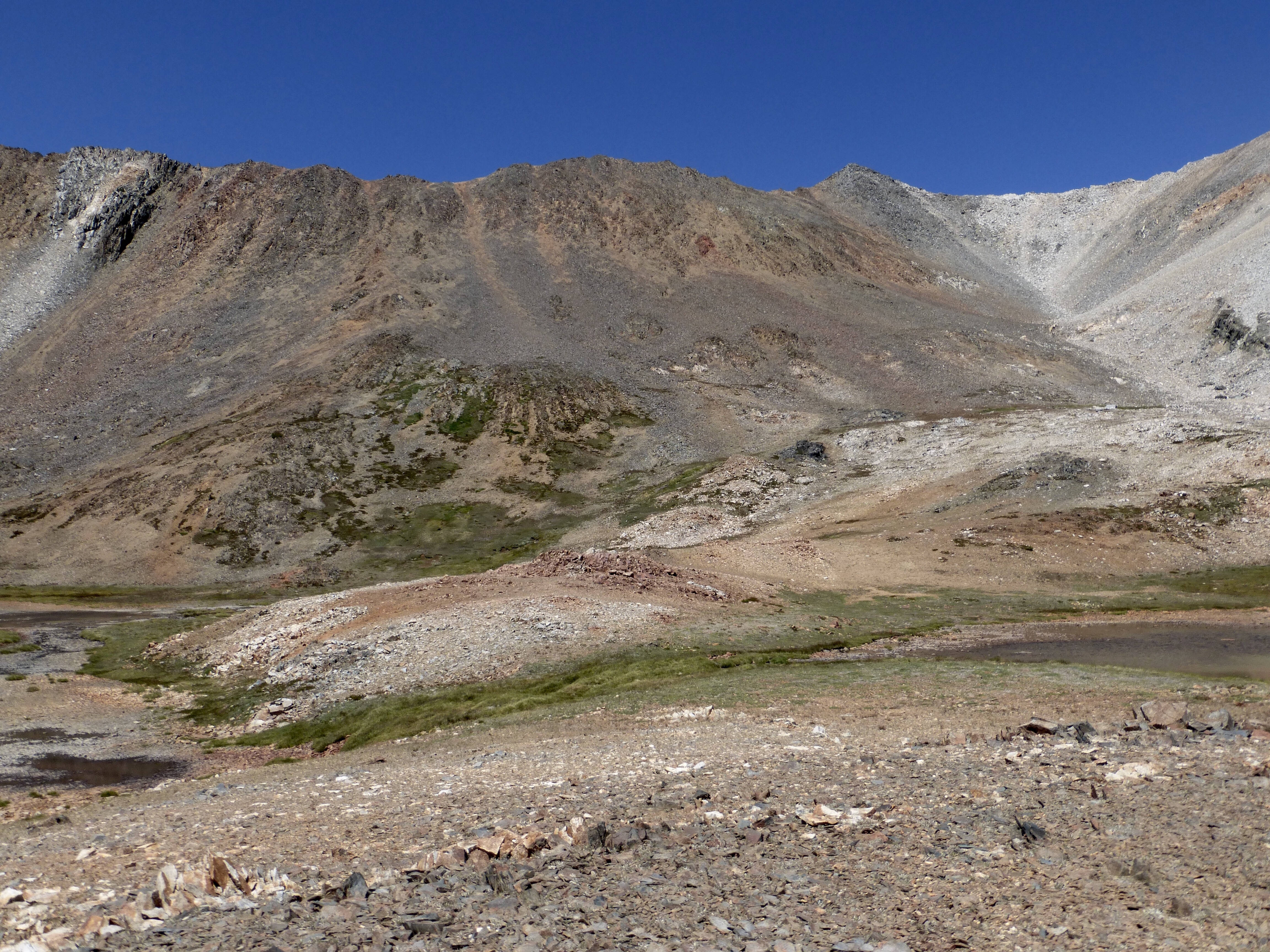 White Fork Pass, the brown strip in the center. 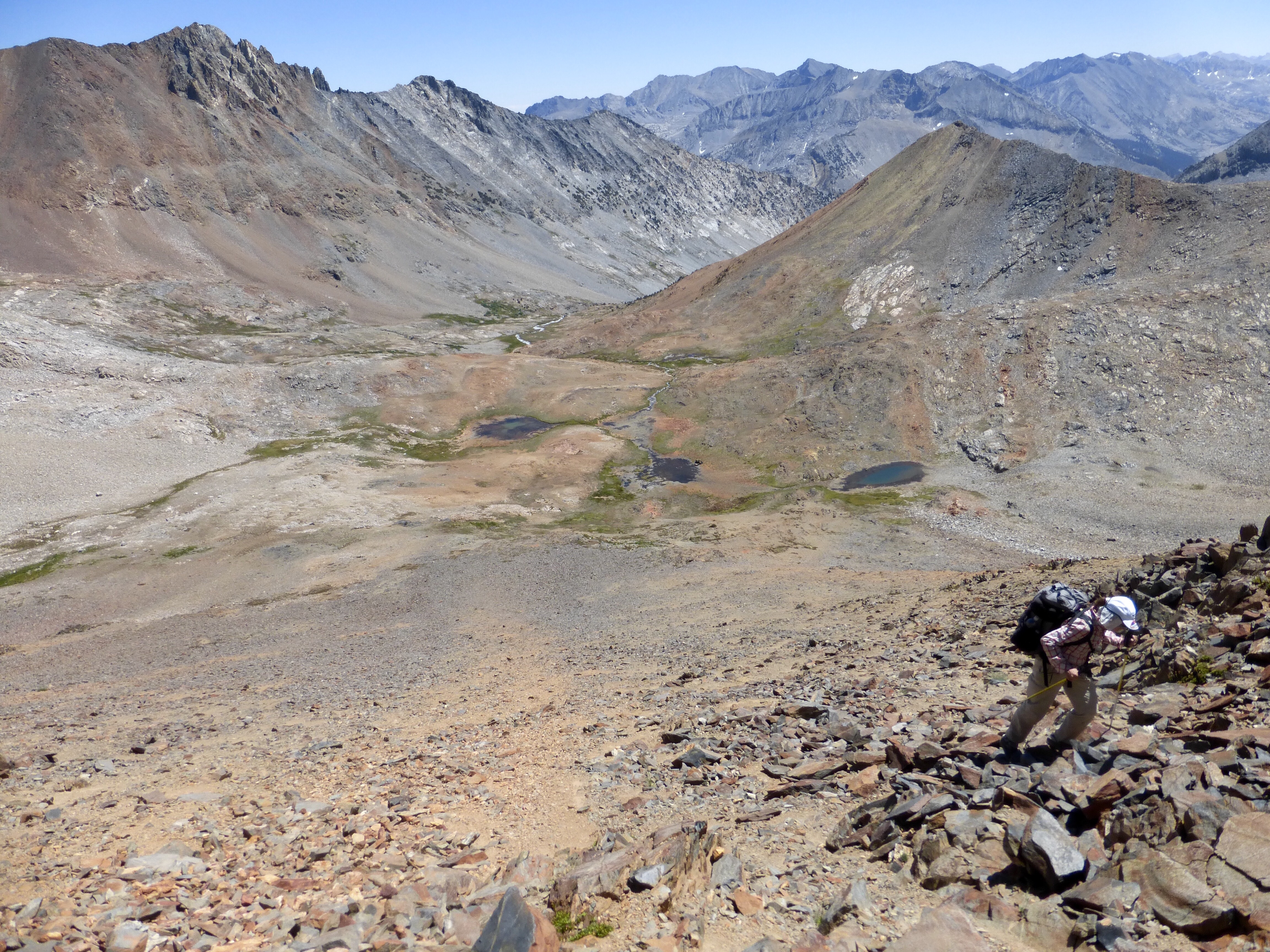 The descent off White Fork Pass (12,227ft) is my favorite kind of descent. Again, like a shallow sand dune with chunks of small rocks to make it interesting. I was able to heel plunge and kinda surf down most of it. 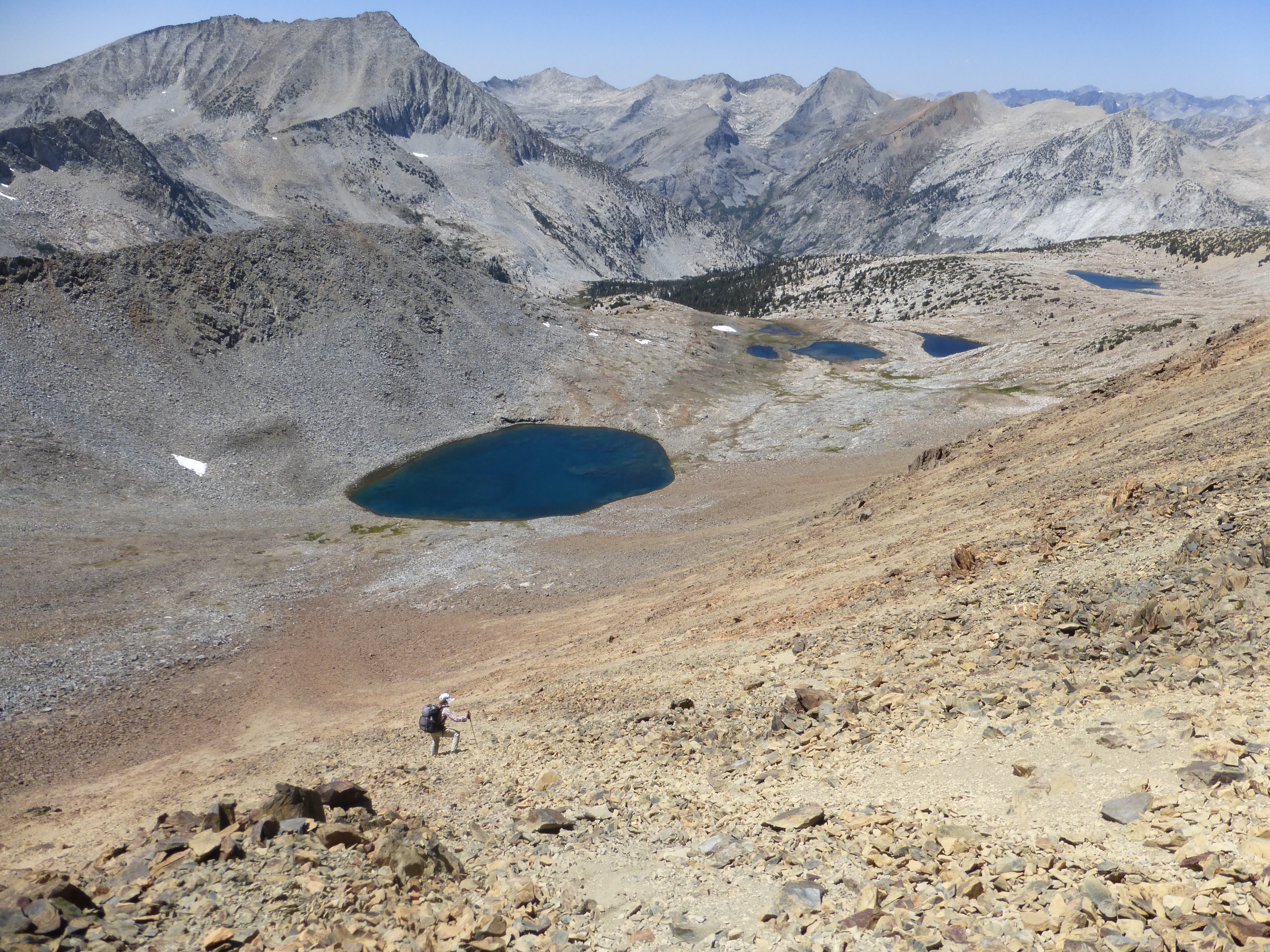 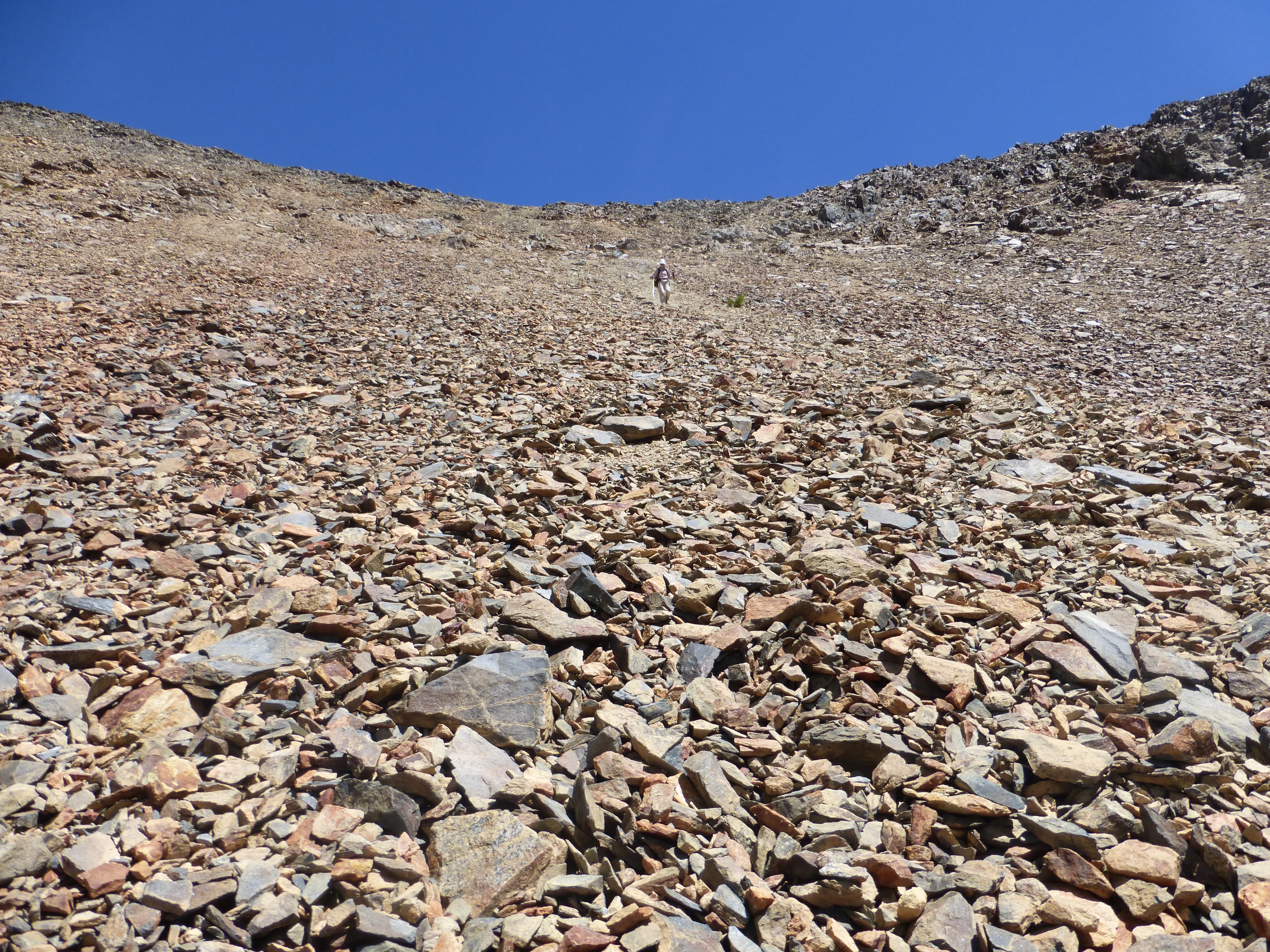 The bottom of the descent had more talus. 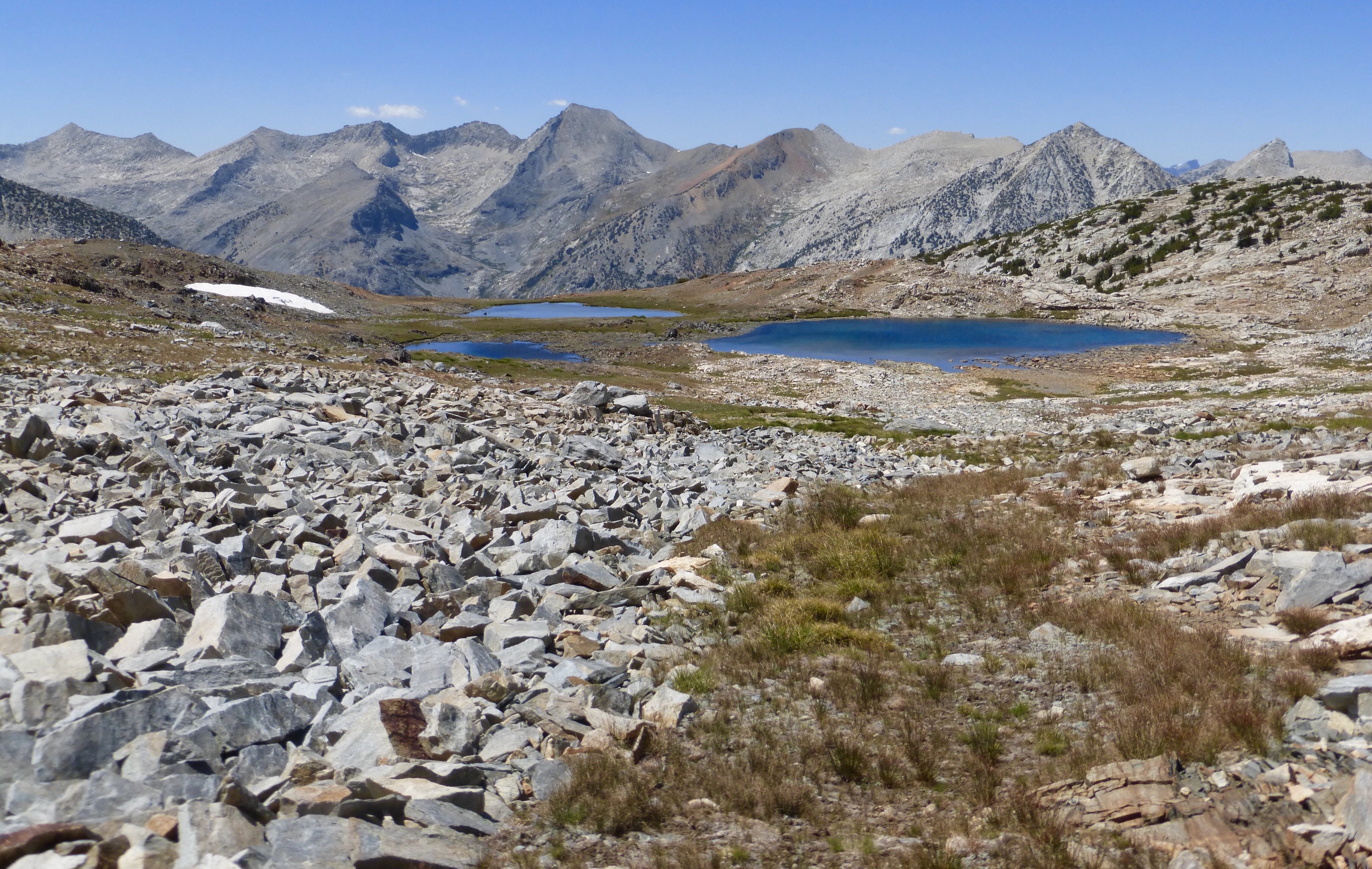 It was pretty hot and in the low 80s today, so as we headed down to our next low point of the S Fork Kings River (9,500ft), we stopped at a surprisingly pretty non-lake area (labeled standing water in the map) that seems to have a nice gathering of water. We are ahead of schedule and took a nice 45min break while E got in the water and I ran for the trees to dig a hole with some digestive issues. 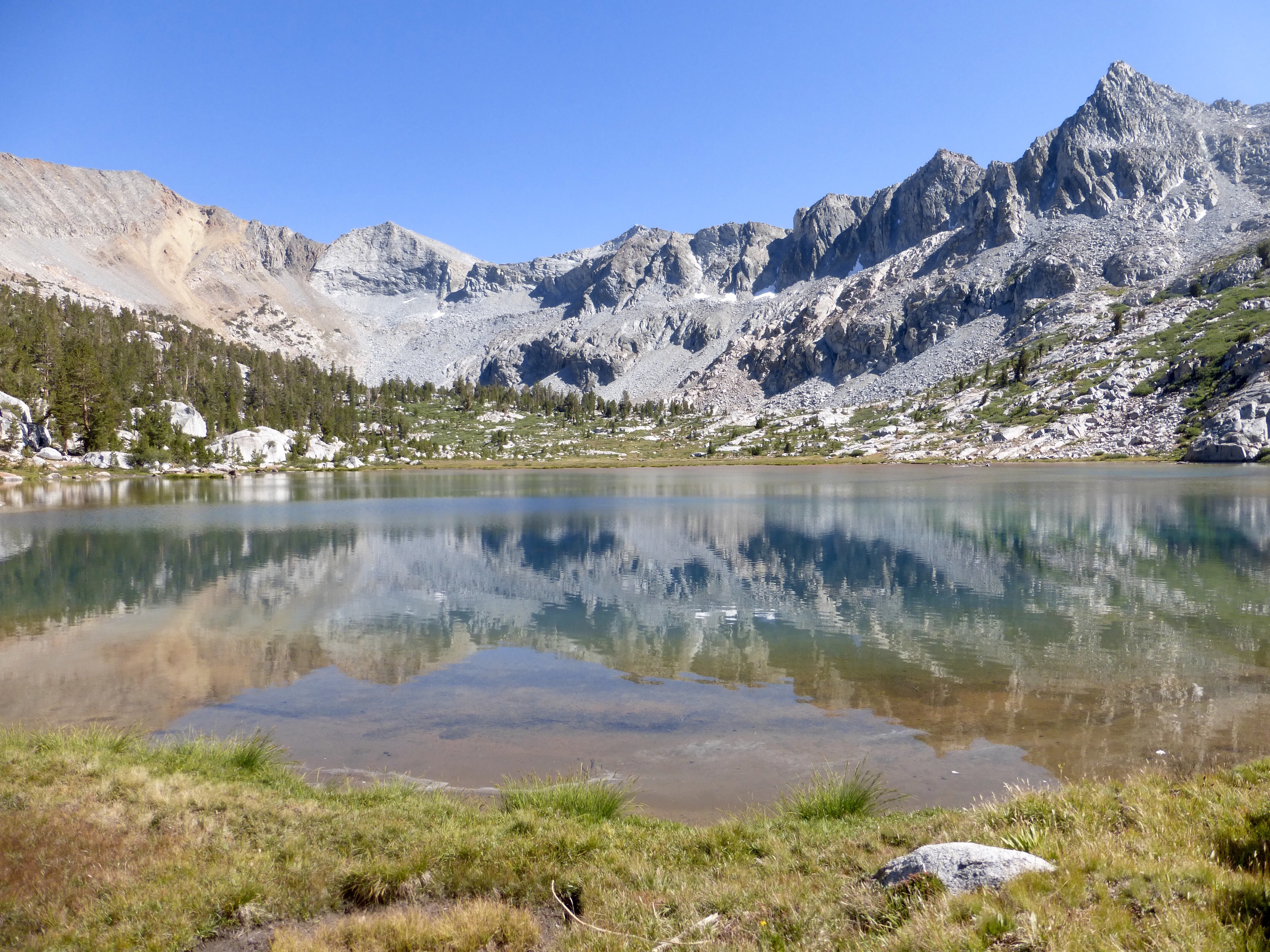 The White Fork is aptly named, as it had some kind of mineral in it that makes all the rock around it white. It makes me think of alkaline water in the Southwest, which my stomach does not take kindly to. I don’t know if it’s the water, but my stomach was gurgling and cramping and something cleaned me out pretty good, blech.

After our break, we were surprised to easily get through more of the wooded off trail stuff that took us down to South Fork Kings River. 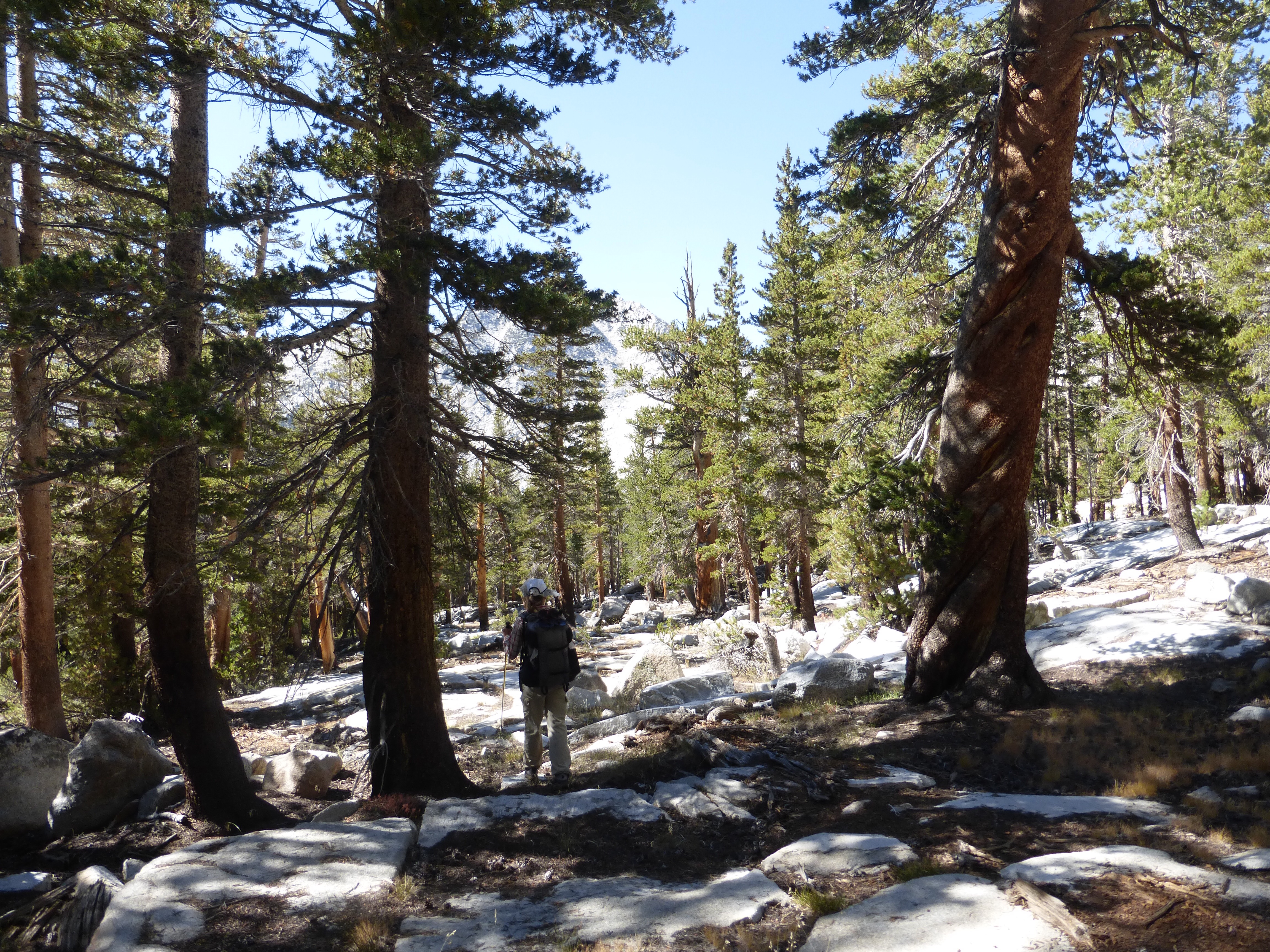 We then found the old trail that we needed to follow to head up to Cartridge Pass. We decided to get high enough on the way to the pass to camp at a lake just below the pass. As we went up, we got a great view of what we dove down to get to the Kings River. 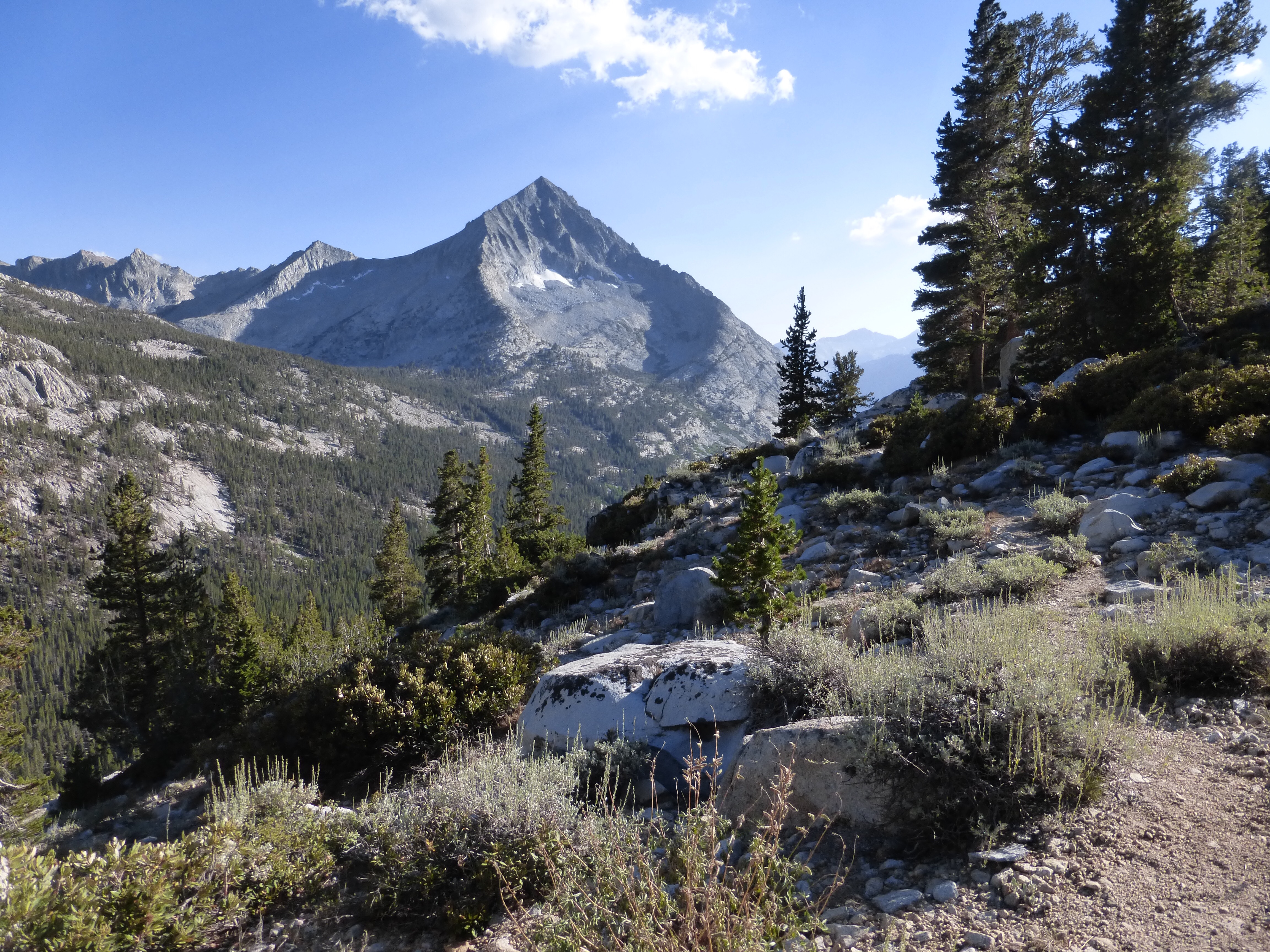 Looking back. We came from that valley to the left of that mountain and went down that wooded hillside to get where we are.

The unnamed lake we camped above had a great view. We have Cartridge Pass right behind us and the lake ahead. 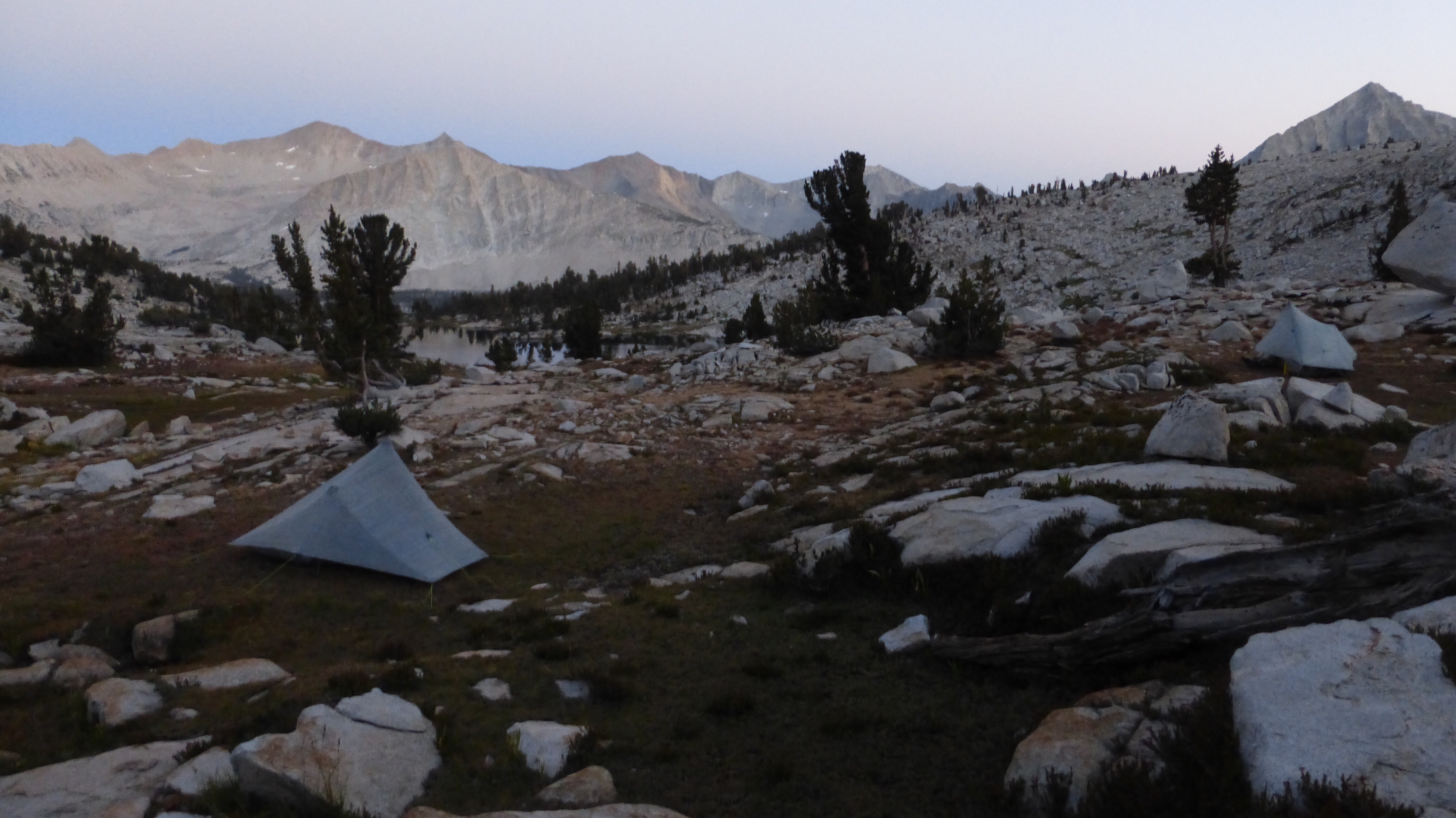 Great spot looking back on where we came from.

Far in the distance, we can see White Fork Pass. It’s the brown ridge (right center) far in the back.

We got to camp at 6:30pm, which is early for us, but we both were wiped out and surprised at how many miles we managed to pull out today. I don’t know if I’m fighting something off or if I’m just working that high mineral content water out of my system, but I need to catch up on sleep. It isn’t even 9pm yet and I’m going to bed. Very rare for me, but hopefully it’s just a brief thing and more sleep will help.