I thought I’d sleep in this morning after staying up late, but my body was up at 6:15am. I specify body because I’m not sure my mind ever really woke up today. It rained hard last night and I’m so happy with my random timing to have dodged that cold hard rain last night and again this morning. I wrapped up pretty much all I needed to do and Marcus had me at the Northern Terminus of the Bibbulmun by 1:30pm, which is smack dab in the middle of the town of Kalamunda. Just one block from the trailhead was a Subway, so of course we ate there. Yes, this may already be the best trail ever… 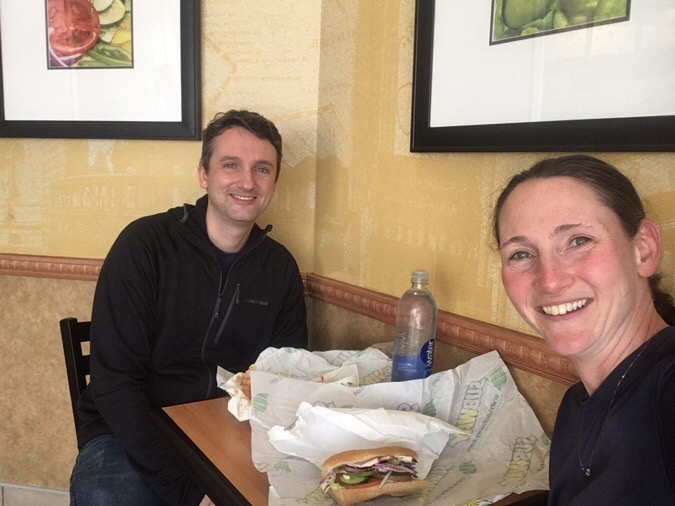 A prehike lunch at Subway. I’ve said it before all good hikes start with Subway. 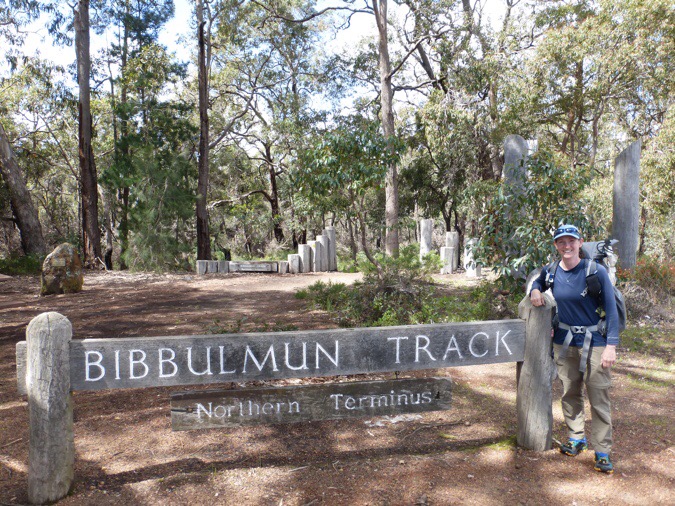 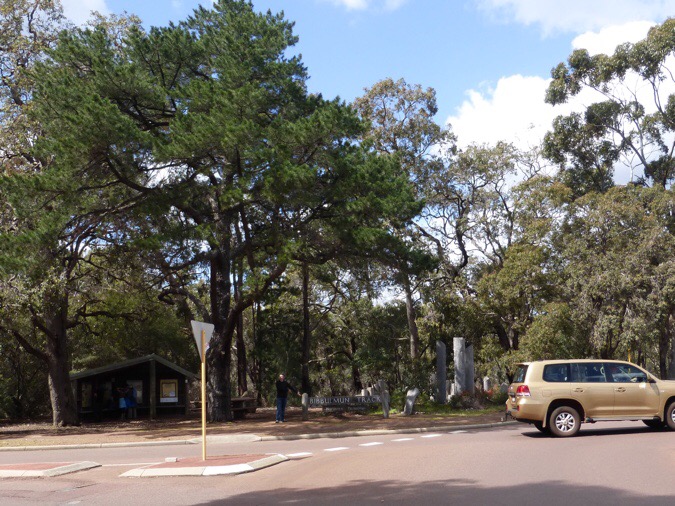 A perspective of the trailhead right next to a busy roundabout.

The Bib is a lot like a tamer version of the Appalachian Trail. It has many huts and is never too far from civilization often going through towns and crossing roads. Within a couple minutes of starting, the Bib walked along a road for a couple blocks. Marcus drove up, and not surprisingly, I had left something in the car…my rain jacket! That would have been pretty terrible if I didn’t have the rain jacket. Again, I’m such an idiot with leaving things. 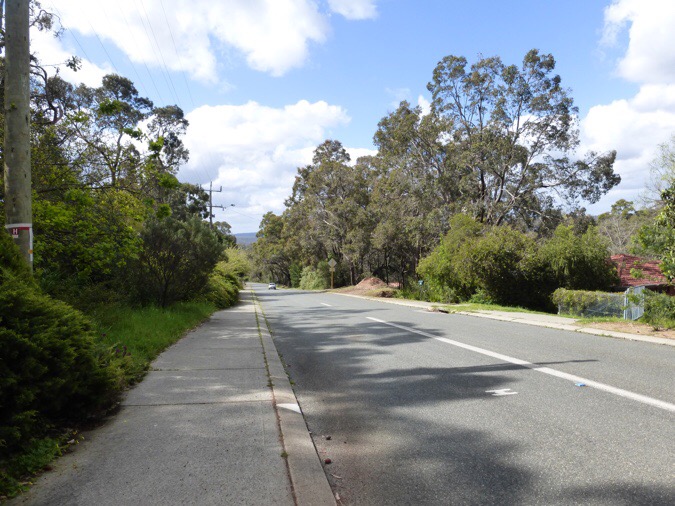 The trail logo is a Wagyl (or Rainbow Serpent), which is an Aboriginal Mythological creature that is said to be responsible for many of the waterways and landforms around Perth. Many of the Aboriginal Dreamtimes (stories) involve creatures that created the unique formations (like Uluru) I’ll be going through. 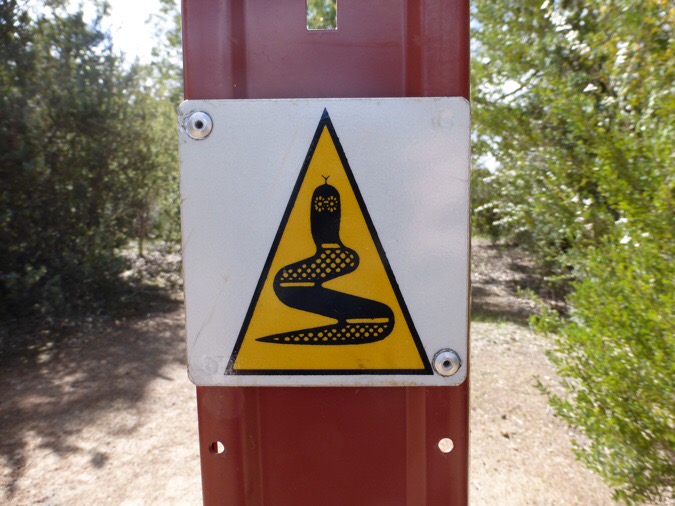 The name, the Bibbulmun, comes from a language group of the Noongar Aboriginal people of Southwest Australia and recognize their practice of walking long distances for ceremonial gatherings. 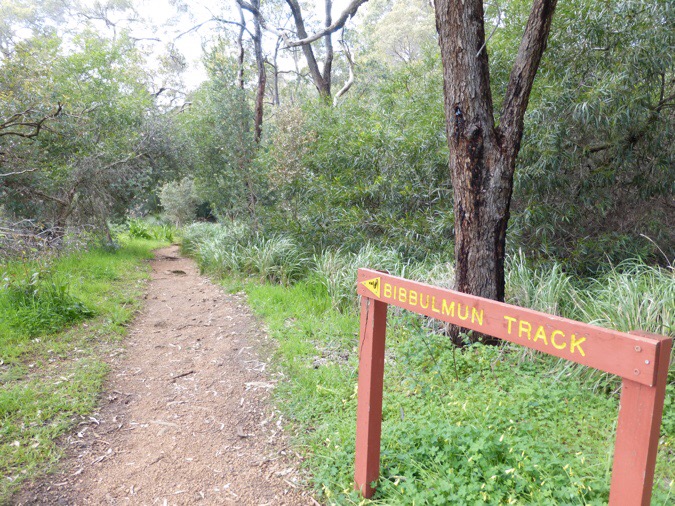 The trees and flowers out here are very unique. The guidebook is quite detailed in describing the scenery, which is nice, but today I just needed to calm my mind and walk. Tomorrow I will make more of an effort to better know what it is that I’m walking through. My mind was swimming with all I’ve taken in over the last couple days while in town between trails, so the guidebook was an overload for me today. I started to read it towards the end of the day once I had mentally calmed a bit. Here’s a sample of what’s in the guidebook. Notice the level of detail and how even specific trees are pointed out. 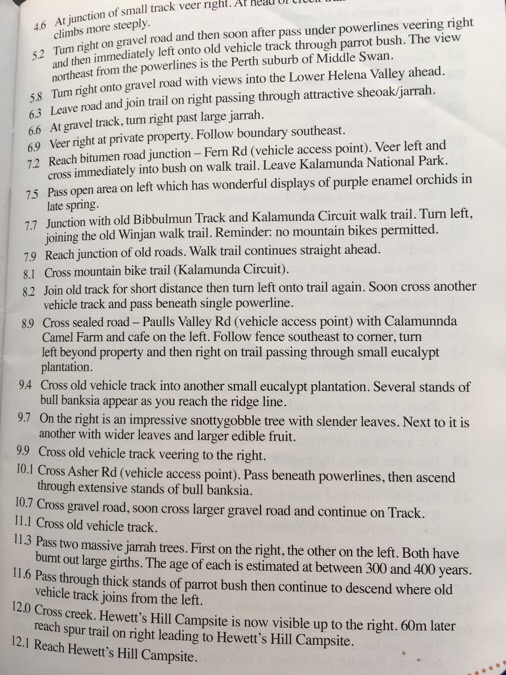 A sample page of the detailed guidebook.

The trail undulated a bit through Kalamunda National Park and alternated between a wide path, a nice smooth trail, a road, and a bumpy rocky trail. Plenty of people  and mountain bikers on a holiday weekend here. 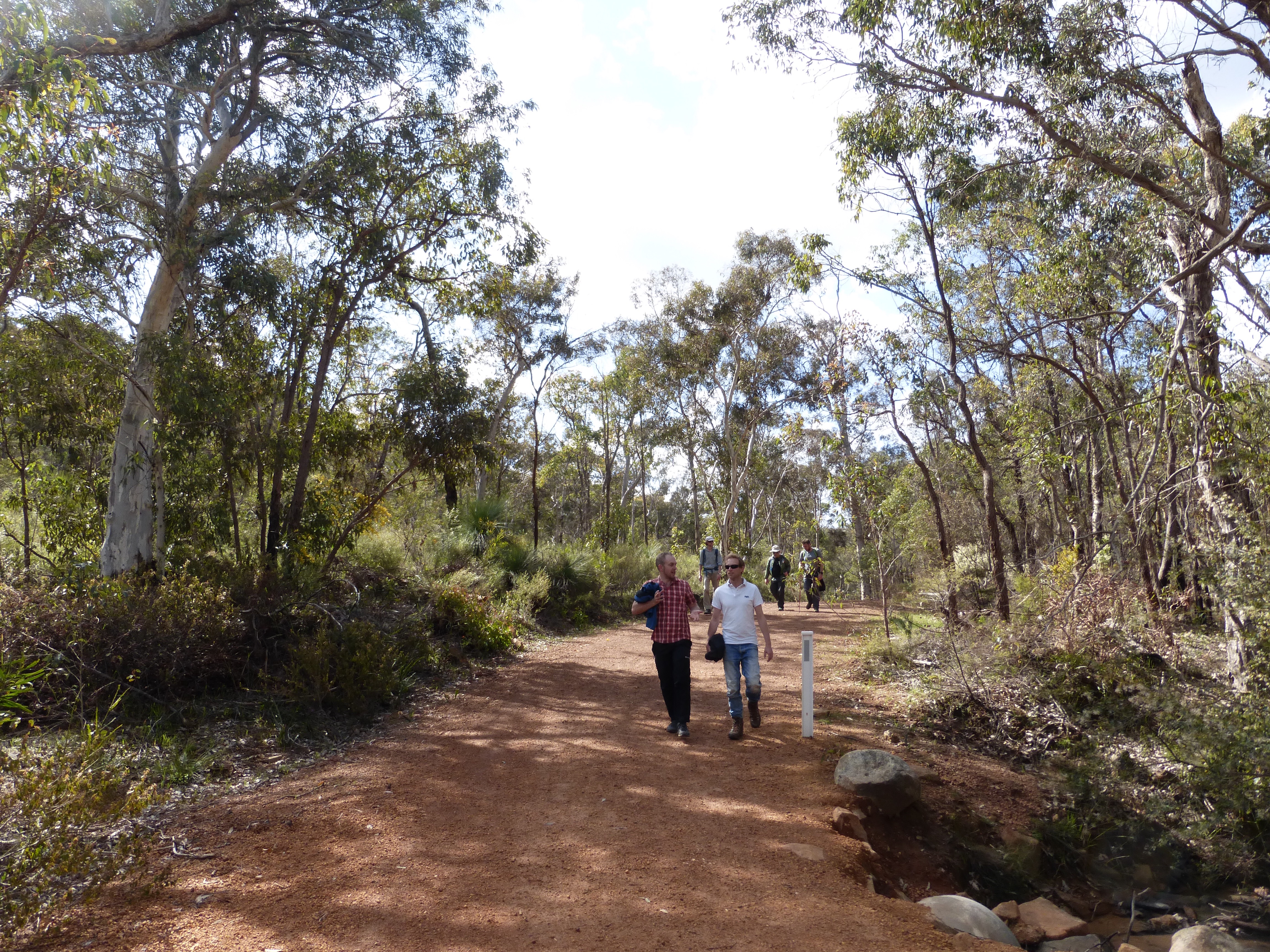 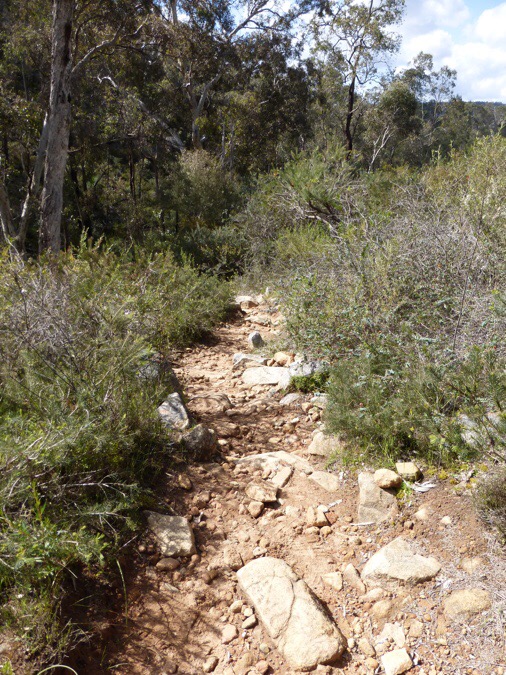 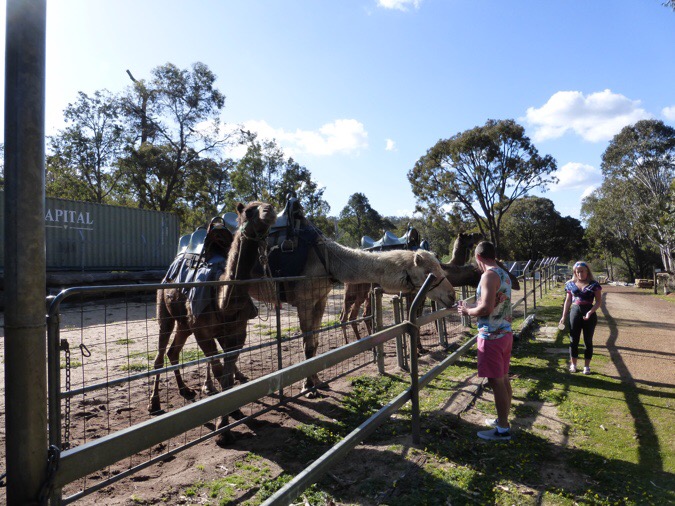 I got a couple miles in and reached back for a drink of water, which I had filled at Subway from the drink machine. My bottle felt oddly distended and rigid when I grabbed it. When I took a swig, I immediately realized why. Instead of water, somehow I had topped off my bottle with Sprite. I don’t drink anything carbonated because the fizziness stings my tongue and throat. I immediately spit it out and realized I now had a few hours before I’d get to water. Fortunately, there were plenty of people out and about and the first couple I ran into were able to give me water. Whew, there’s something I’ve never had happen before. The water out here is seasonal and most hikers just rely on the water tanks that are at the shelters just like on the Larapinta. With the rain lately, I did cross some natural water sources, so that’s good. 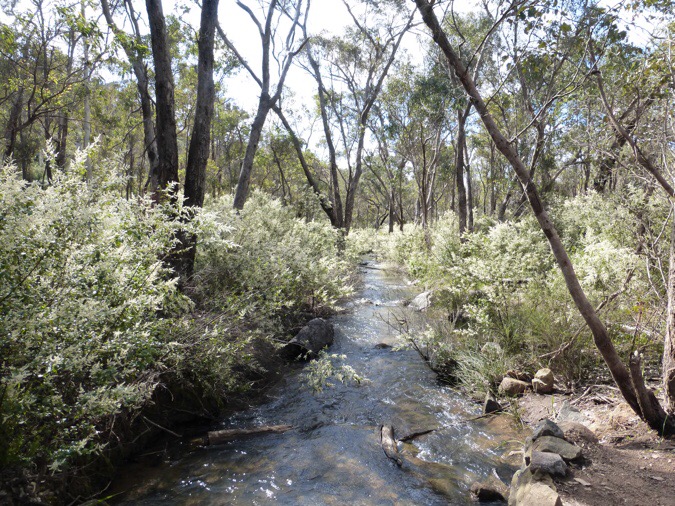 In recent years there have been some bush fires that have burned sections of the trail. Some have reroutes. Here is a section that was burned with a layer of black ash that smelled like a campfire all along the ground except for the trail weaving through it. 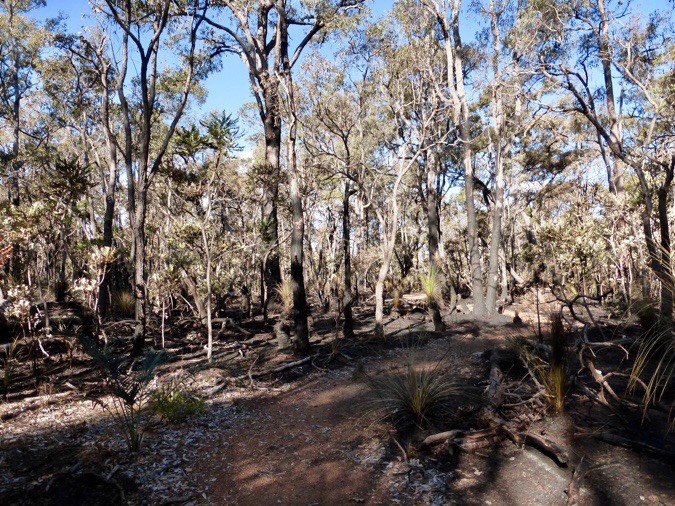 I passed my first shelter, Hewett’s Hill Campsite, and two families were there. They are quite popular and large with campsites there as well. I’d say 90% of the hikers probably camp at them. I’m less of a group camper so I’m going to see how it goes. I like landing anywhere at the end of the day and not being restricted to the campsites, but it is nice to sleep with water and a toilet. I grabbed water and decided to do a bit more since it was only about 4:30pm. 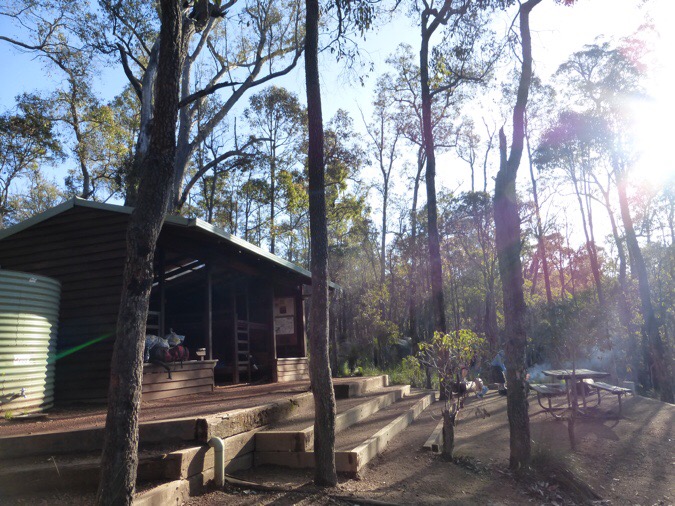 The forest out here is quite dense with trees well spaced, but lots of brush on the ground. I figured I’d just keep an eye out for a good flat spot and grab one once I saw it. Not long after the shelter, I came up on a mob (yes I looked that up) of kangaroos! There’s video I got but that’s on FB and Insta because I wasn’t able to load it on the blog. Here are photos from the video. I’m sure the novelty will wear off as they should be quite common on the Bib, but it hasn’t yet!
​​​ 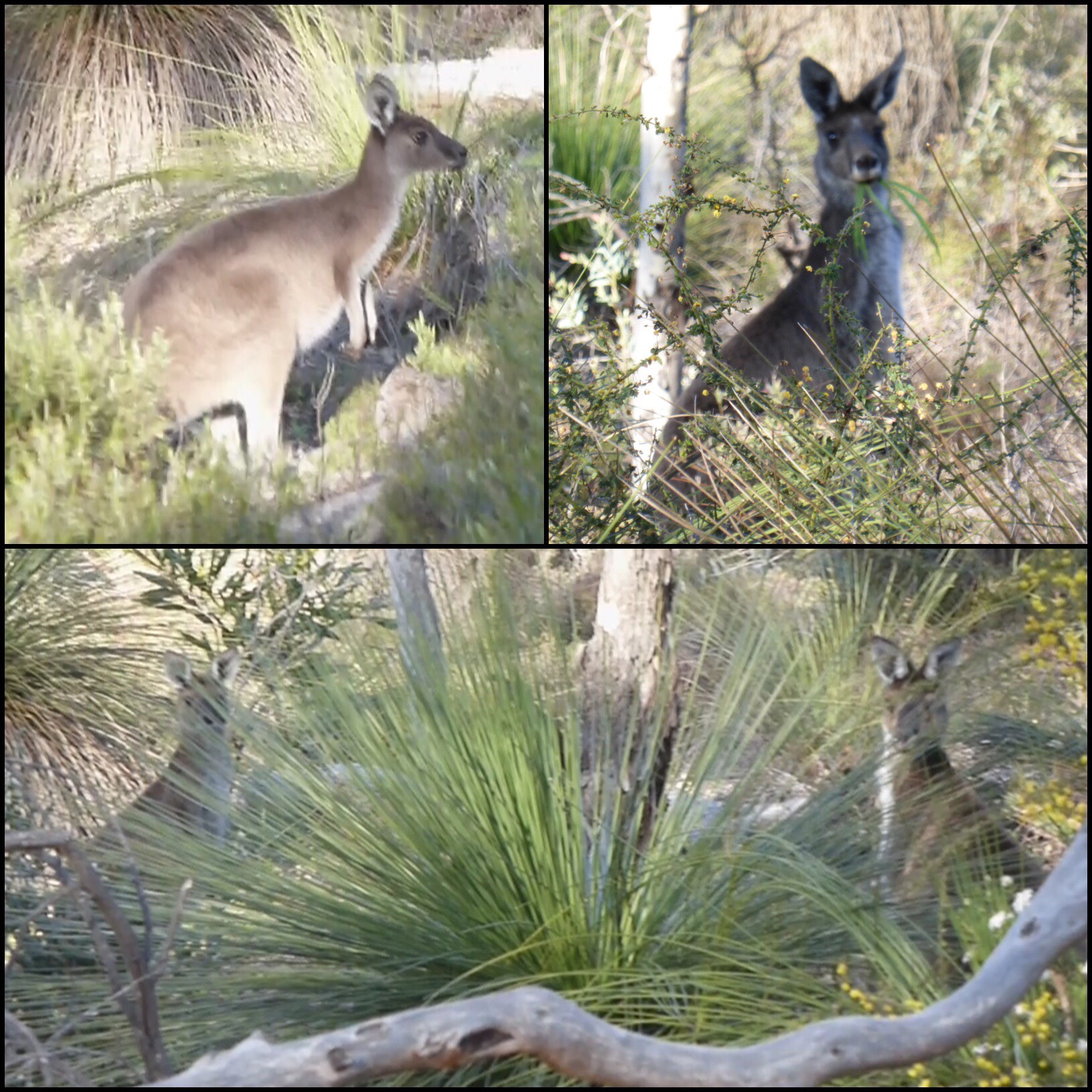 I was glad I walked on because I was following a dirt road that had many flat viewpoint areas. After passing the third (and best) spot, I decided to take it before my options ran out. I have a view, of the Helena Valley and can see Mundaring Weir wall. There is a reservoir there that has restricted times to walk through (or you walk a road alt), so I timed my start to end today just before it and be able to walk through in the morning.
I got to camp nice and early at 5:15pm and it got dark enough to need my headlamp by 6:45pm. I had grand plans of watching my shows that premiered this week in the US, but my energy has been off with this early darkness. It wasn’t even 8pm when I crashed for the night! I figure I should listen to my body and accepted the early bedtime. It was a great start to the Bib! 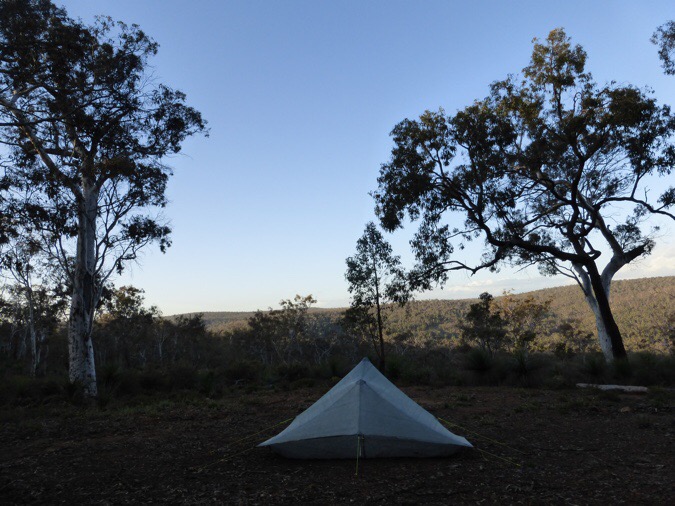