Day 2: Spring On The Bibbulmun

September 26th
1mi S of Hewett’s Hill Campsite(8.5)-Beraking Campsite(31.9)
Mileage: 23.4mi/38.2km
Campsite Elevation: 903ft/275m
I must have been pretty tired last night because I fell asleep before 8pm and slept hard. I woke up around midnight, and in my grogginess, I realized I hadn’t done many of my chores and I was even still wearing my hiking socks instead of sleep socks, and I wore my headlamp the whole night. That was a fleeting thought and I was back asleep before I knew it. I woke up at 5:30am with thick fog filling the valley. It feels like I’m on the Appalachian Trail again as I haven’t had fog and scenery like this since then. I like the fog. 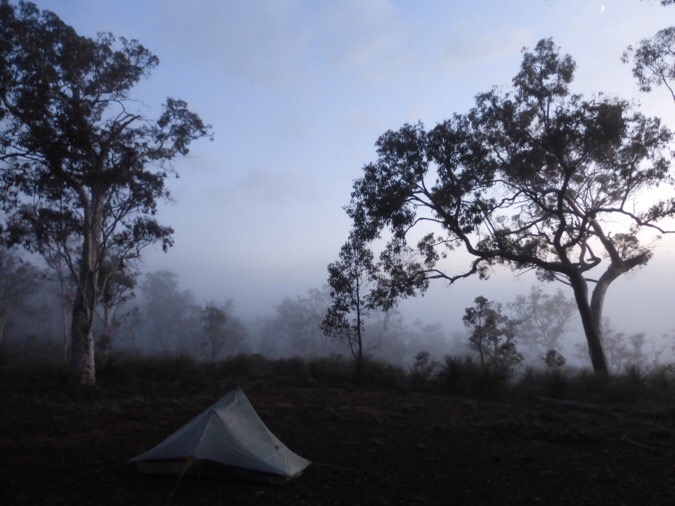 I was expecting colder weather last night, but I don’t think it dropped below 40F/4.4C. I had lots of condensation on the tent, but my sleeping bag and gear were fine. I wrote yesterday’s journal entry and since I had service, I was able to post it. After all that, I didn’t start walking until 8am.
There was a ton to walk through this morning and it was a lot to take in. I went through part of Beelu National Park, and it was like going through a Botanic Garden with all the flowers and well manicured trail. I’ve heard that I’ve managed to hit one of the best springs ever along the Bib. Rains have been higher than usual, so I’m getting to see tons of wildflowers. I decided to take a photo of every flower I saw today to make a collage. Man, it was a lot of flowers! 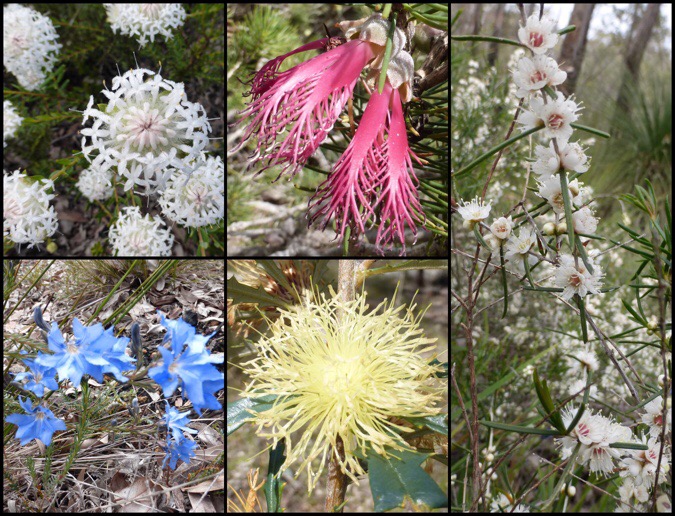 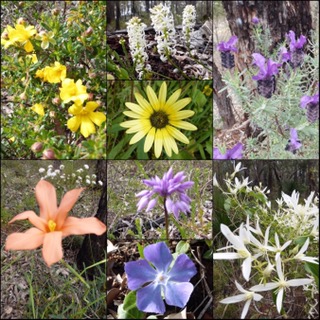 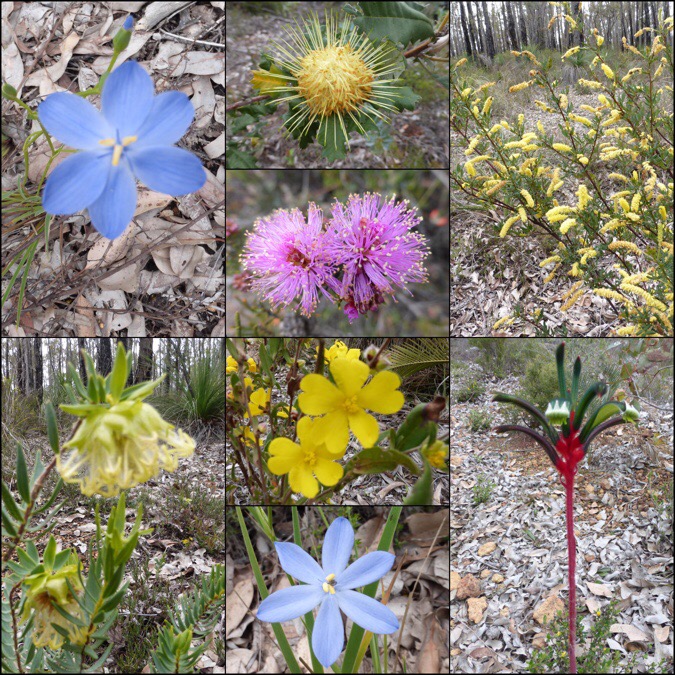 While walking, I crossed paths with a solo older woman named June out for a walk. June did the Bib solo around 15yrs ago and that’s pretty darn cool! It was Inspiring to meet June and hear a bit about doing the Bib before it had all these markers and signs. 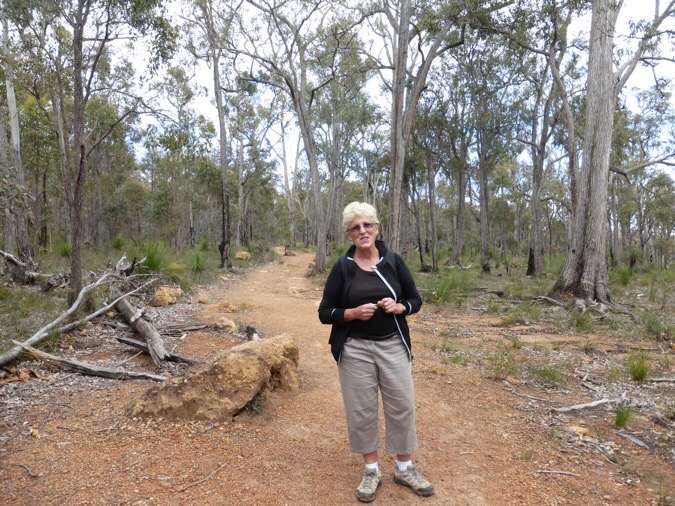 June did the Bib solo 15yrs ago.

I also walked the walkway that goes over the Mondaring Weir wall. It had a nice view of the river and many signs for tourists about the history of the reservoir and what it does for this area. 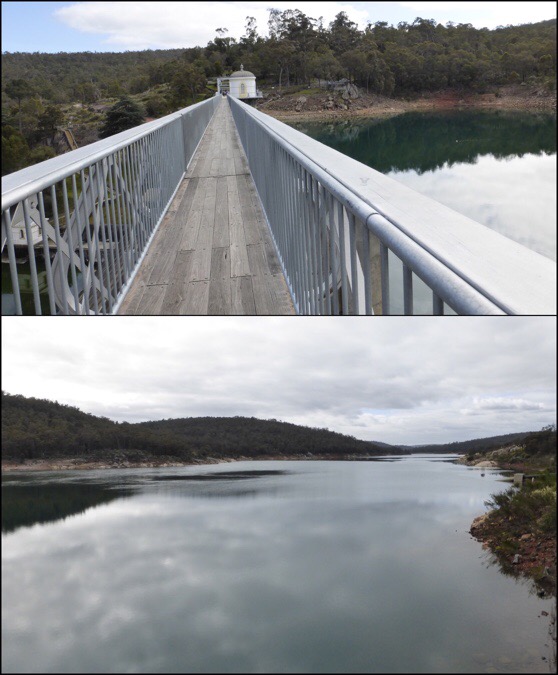 From there it just seemed like one thing after another. The trail passed by a pub, temporarily overlapped various other paths, and went through the Perth Hills National Parks Centre and campground. It is a national holiday, the Queens birthday, so tons of families and couples were out on the trail the first 6mi/10km or so today. It was a lot to take in. 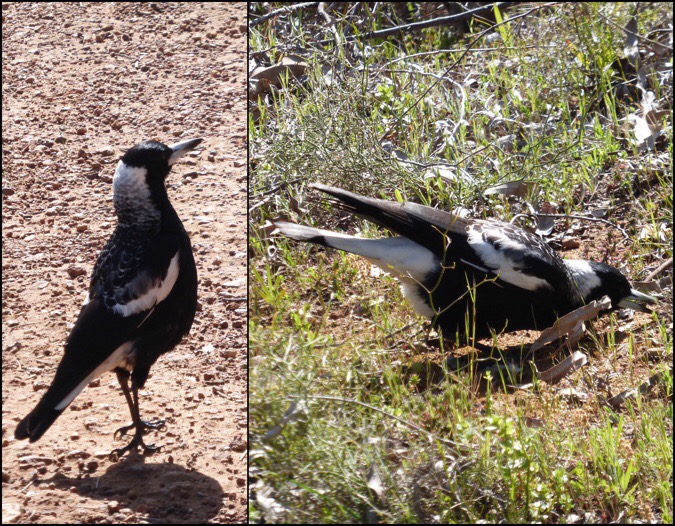 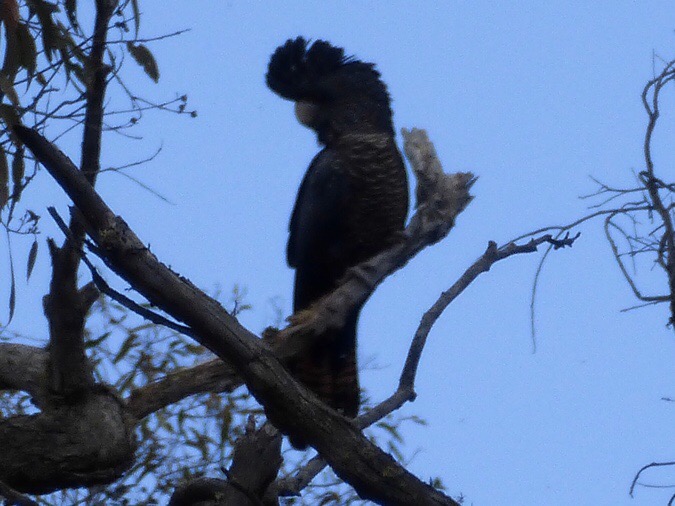 Things calmed a bit after the nature centre and the trail had longer stretches of solitude. I had lunch at Helena campsite overlooking Helena River Valley. There was a picnic table by the shelter, but another couple that I met earlier in the day gave me the tip to walk down a bit in front of the shelter to be able to sit on a rock outcropping with an unobstructed view. It was great, and again, reminds me of the Appalachian Trail. I tried the salmon packet with lemon and dill seasoning and enjoyed it. I heard today that in the bigger city of Perth, it is possible to find the packaged tuna in foil packets. Oh man! I was so close! 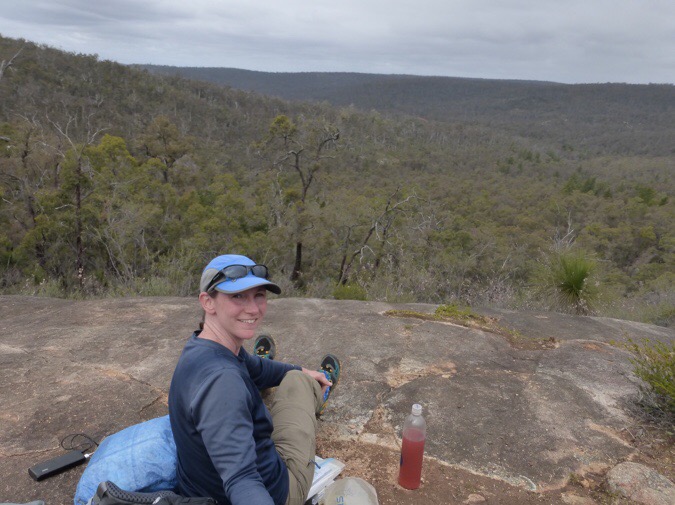 As you can see, it was overcast all day, muggy, and in the upper 60s. Pretty great hiking weather! It sprinkled and misted a couple times, but nothing significant. I now have another umbrella because Marcus had one he was able to let me use. I still have slight hope that my umbrella will be returned in the Larapinta. Emrys, who I’d met on the trail came really close to it and somehow the person that seems to have it eluded him. My only hope would be if the younger group I also met sees the guy with it. I feel like they would have called by now if they had it, but a couple more days would still be plausible. At least I can use Marcus’s umbrella until I find out if I’ll need to order a new one. 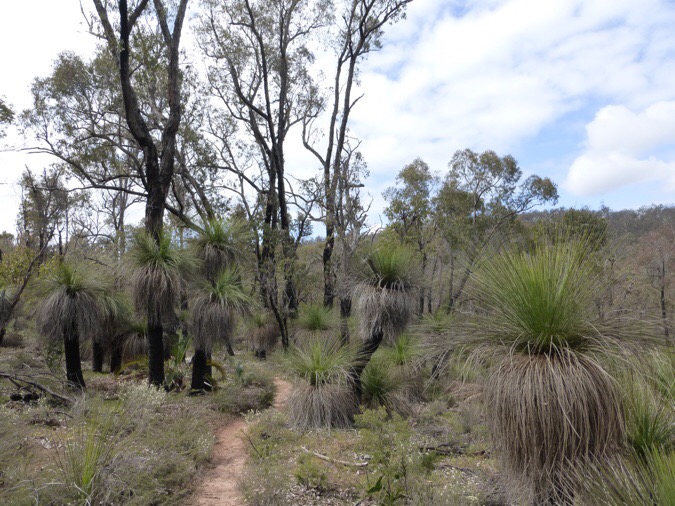 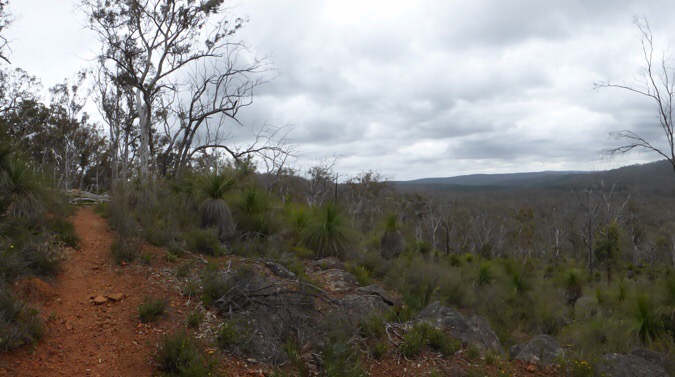 I looked ahead and saw that the next two shelters (with water tanks) were each just about 5.5mi/9km from one to the other. The shelters make nice goal points and they are more frequent in this more heavily used area with lots of access roads and trails. There aren’t mile markers on the trail, so reaching a campsite is always a good landmark. 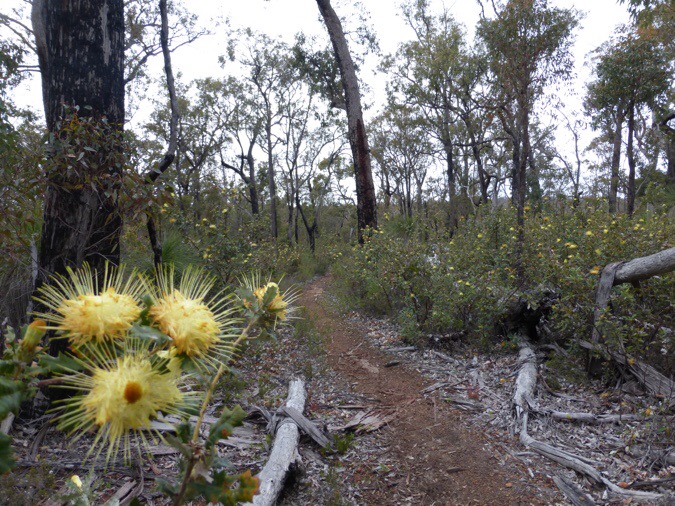 I didn’t see anyone after lunch where I saw a few others. I’d seen and stopped to talk to so many people the first half of the day that my head was just needing some down time to just space out and cruise. For a bit of the afternoon, I listened to more of Bill Bryson’s Australia book. 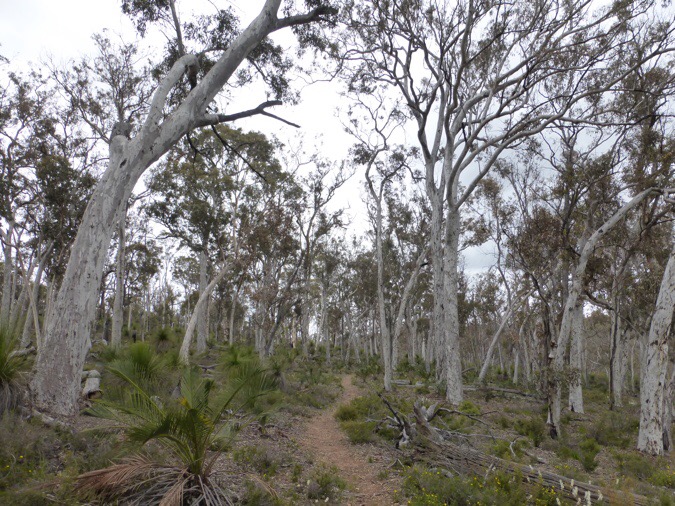 I made it to Waalegh Campsite around 3:45pm. It is one of the campsites with with the best views. I had just a couple hours of hiking to get to Beraking Campsite, but the clouds were getting dark and the wind picked up. 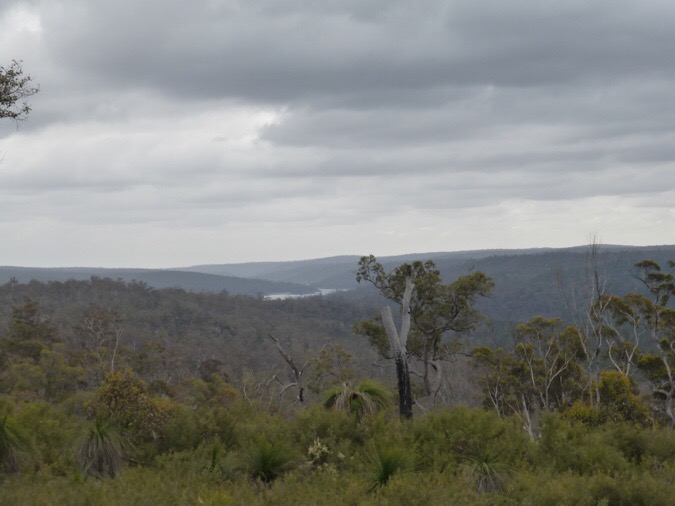 Looking back toward Mondaring Weir.

I walked a bit faster as it felt kinda ominous and eerie. Everything was pretty quite like the calm before the storm. I was hiking along and all of a sudden, an emu ran across the trail ahead of me! I saw an emu! They are so big and odd looking. It’s like they are cartoon characters the way they move. They blend right into the scenery around the grass trees and he was not cooperating for my photo op! No photo, but I saw an emu!
I hustled to Beraking as it started to rain a bit and made it at 5:40pm to find two other end-to-enders (as they are called here) sleeping in the shelter. Each are solo and each are doing this first stretch shelter to shelter, so they had done about 5.5mi, 9km today. They were pretty cold from sitting there since the afternoon and were about to turn in for the night since it got dark around 6:45pm.
My gut was telling me the whole way to the shelter that it looks like it could rain hard tonight. I’ve only slept in a shelter once (last night on the AT in 2014) and I was thinking of doing it tonight. There are practically no bugs out here and the shelters are incredibly clean. It was very enticing to not put the tent up and to give the shelter a try. The two hikers were quiet and it felt like the right thing to do, so I’m actually sleeping in the shelter! I like it so far. Like, really like it! They both are snoring some, but I think my earplugs can cover them. It is nice to have more space and to not have to mess with the tent. Plus, there is cell reception, so I can post the blog. 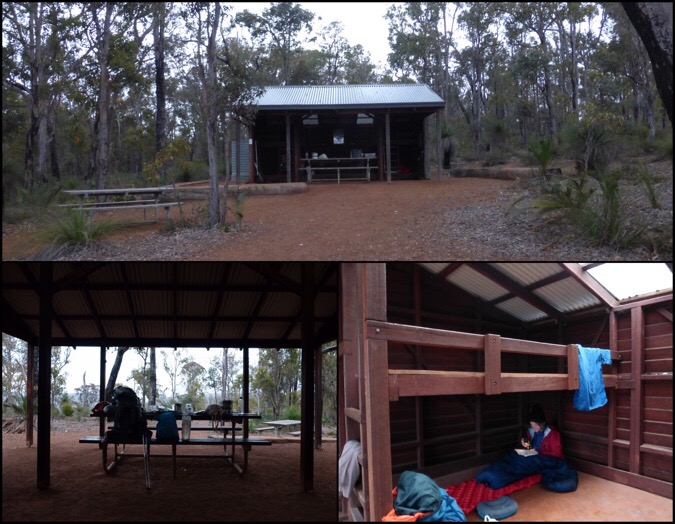 Beraking Shelter and my top bunk for the night.

The best part is that it has rained lightly a few times already since I’ve been here, and the wind is blowing a bit more. Rain just came down pretty good for the last 30mins. I made the right choice! This may end up being a more regular thing. I still feel like it might really come down hard late tonight, so we’ll see. I will say that rain on this tin roof never sounded so good. Pretty excited that I may actually like sleeping in these shelters. I never would have imagined this! I’m finally going to watch a show tonight. Off to watch the season premiere of Greys Anatomy!