It rained again around 4:30am for a bit. It is pretty dark until 6am, so I really haven’t felt motivated to get going until I can see things in my tent. I’m doing this hike in 8.5 days, and most take much longer. I think I would have liked at least one more to make it more relaxed, but I also didn’t want to carry the food. I think if there was more daylight, I’d feel differently, but with so much darkness, I am wanting to sleep more I think, which isn’t a bad thing. I’m on a schedule to make my flight on this hike, but once I move over to the Bibbulmun for a month, I will be on a much more relaxed schedule. After my long side trip yesterday and then needing to stop early for the storm, I had some miles to make up today. Due to where the water tanks and campable terrain lands, I was limited in choices and had quite the long day ahead. I got going at 6:40am and had a great cruise up and down a valley most the morning. 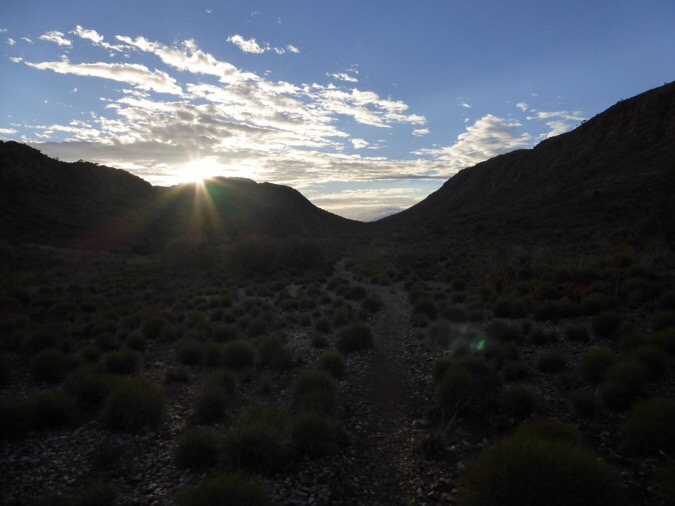 It was quite muggy. My sunglasses had a greasy film on them (sunscreen?) I couldn’t get off because it was so muggy I had nothing really dry to wipe them off. It made for a slightly blurry morning as I had to accept it for awhile until things got drier a few hours into the day. I caved and finally went with the shorts and it wasn’t bad at all. The brush didn’t bother my legs, however I did see my first snake! It was camouflaged by the trail and I didn’t notice it until it darted off when I got a couple yards from it. The brown ones are the deadly ones apparently, but there are tons of seriously poisonous ones out here. I didn’t get a great look at it, but it seemed more grayish in color and a little less than a meter in length. I don’t need to see anymore! 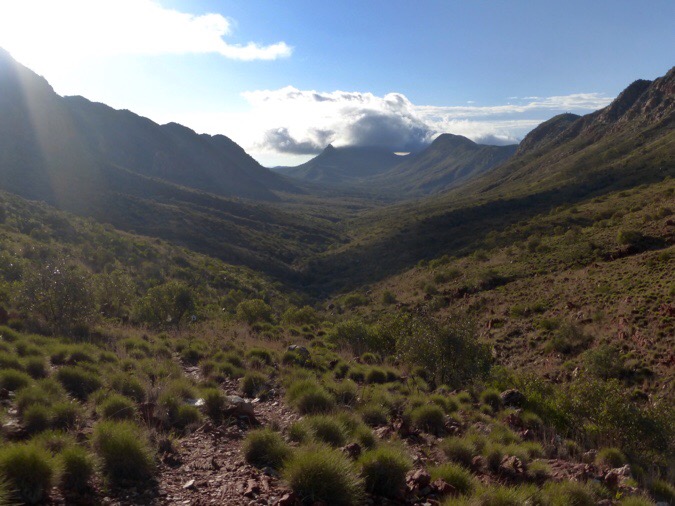 Real early in the day I met another hiker coming my direction who started well before the sun came up. I think this may be a really difficult stretch for most. The 19mi/30km waterless stretch is really difficult in the heat. He had no idea that small pool of water was at the midpoint and was relieved to hear it. I don’t think that’s a sure bet all the time, but it seems to have been there in previous years as well. However, this is a very wet year and it was just a small pool. 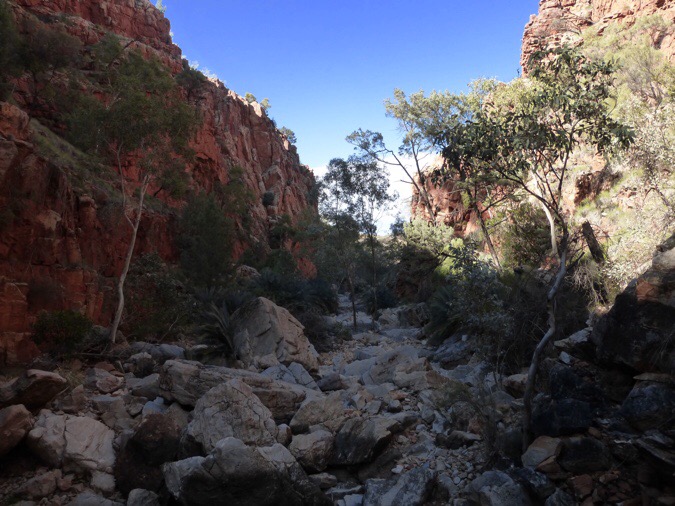 I am finally getting my energy back and rebounding from my monthly lethargic couple of days. It’s been awhile since I’ve been able to HIKE on my own and it felt good to push a faster pace today and be on terrain that cruised most of the day. I’ve missed solo hiking and love the freedom of it. It feels great to be back at it for such an extended period of time after the last two years of pairing up with others. There are pros and cons to each, but I really have needed this solo time and am happy to be back! 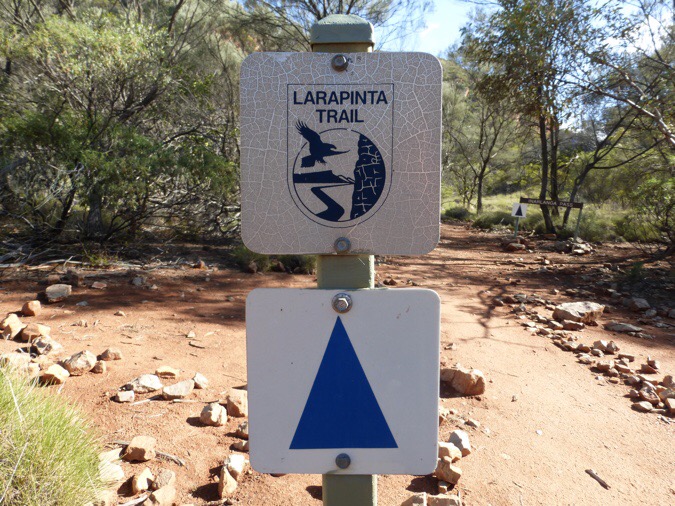 I listened to more Bill Bryson’s Australia book. I mistakenly had the wrong impression of him when I had long ago been told that Katz (from A Walk In The Woods) was fictional, but I just found out that I was misinformed all these years! I have a much better appreciation and trust in his words now!

I met a pair of guys going my direction that I leapfrogged with in the middle of the day. There was another one of those 3G phone signs up on the main viewpoint today. I love those signs! I took an extended lunch up there and was able to get yesterday’s post up. While up there, I did the half mile side trip along the ridge to Counts Point. There was also a tour group that had hiked up that are doing sections of the Larapinta as day hikes with a guide. I was able to get a photo taken at Counts Point and that was nice. That is not the ridge I hiked up on, but it’s a cool view that shows how far I’ve come. The silhouetted mountain far in the distance is Mt Sonder where I started. 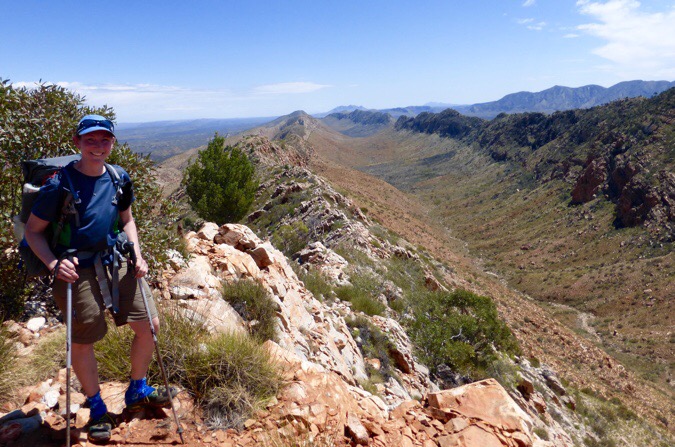 The hike back down went along a flat ridge for quite awhile and it was great! The space out here is just so immense and it’s great to hike and take it all in. Thankfully, it was cloudy with shade on and off through the day. In the heat, this hike would be a whole other beast. I love the clouds and they were scenically spectacular to watch today. 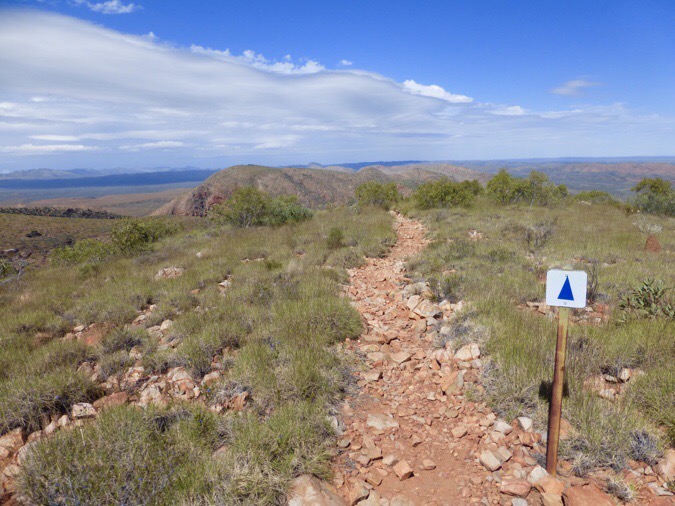 I had one last stop at a shelter to get water for the last few hours of the day. The two guys I’d met earlier were stopping there along with a solo young woman, which was great to see. I actually expected to see a lot more hikers and I’ve only met 11, mostly in pairs. Well, I guess 11 is a lot and I’m just used to the 40 or so a day I was seeing on the JMT and the Wonderland this past summer. There was an option to do a side hike into the nearby Serpentine Gorge, but I decided not to given the big day I already had. It’s the first side hike I passed on that probably would have checked out if the timing was different.
The final three hours was the push of extra mileage I was doing to get back on schedule. It cruised the first half, but the second half was a roller coaster, that was exhausting. Much of it was on dolomite rock which is very deceivingly sharp. I didn’t even want to put my hand on it for support as I was going up. Millions of years ago, this used to be an ocean floor and it was cool to be walking on it. 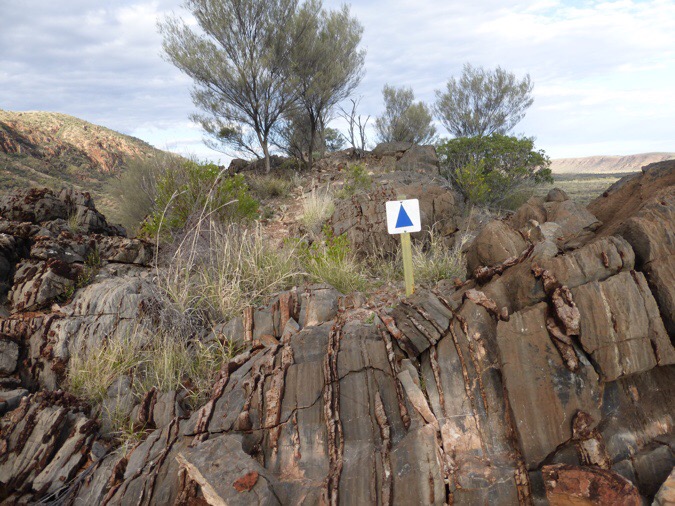 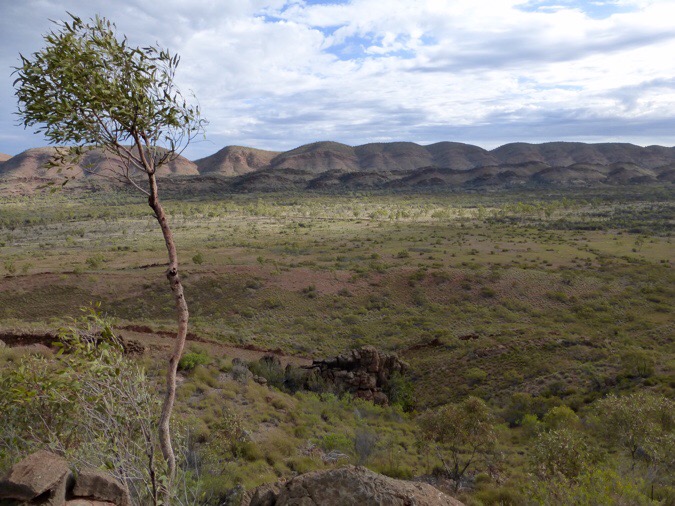 The whole trail is quite well blazed with a sign every couple of minutes it seems. They even have a number on them that counts down (or up depending on direction) the kilometers for each section. I can’t decide if this annoys me. Imagine hiking 140mi and having a sign that counts down every half mile. Sometimes it’s nice to know, but it also makes it feel longer in a way. Like watching water boil. I can’t even imagine that on a much longer trail. 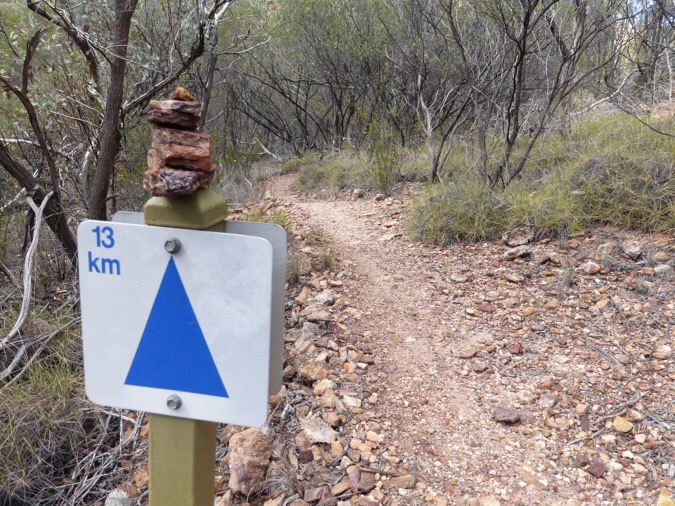 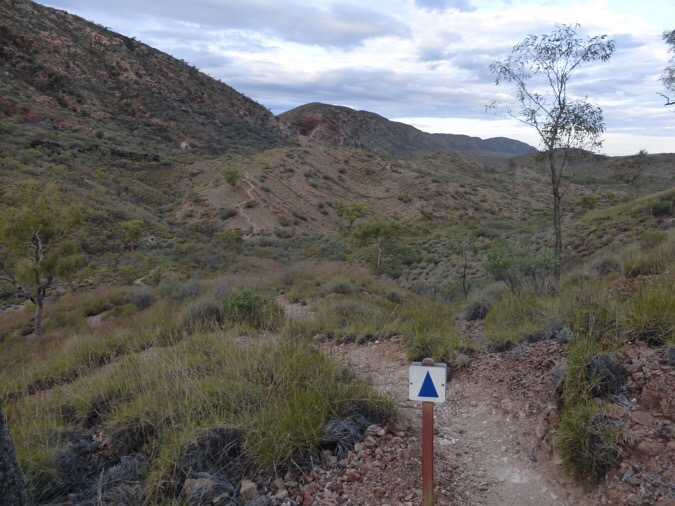 The clouds got darker and I was thankful it didn’t rain until after I was tented (just sprinkles). Looking back, I didn’t get much of a sunset, but the sun’s rays were cool through the clouds. 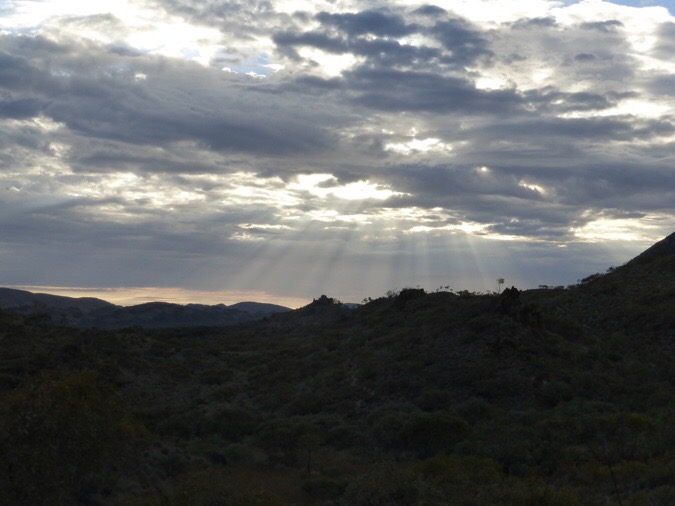 The final section before the campsite had a bit of a haven protected for wildlife. It was like being in the bird section of a zoo with them swooping around. I saw more of the green ones I’ve been seeing. They hardly stand still long enough and close enough to get a good photo. Here’s one. 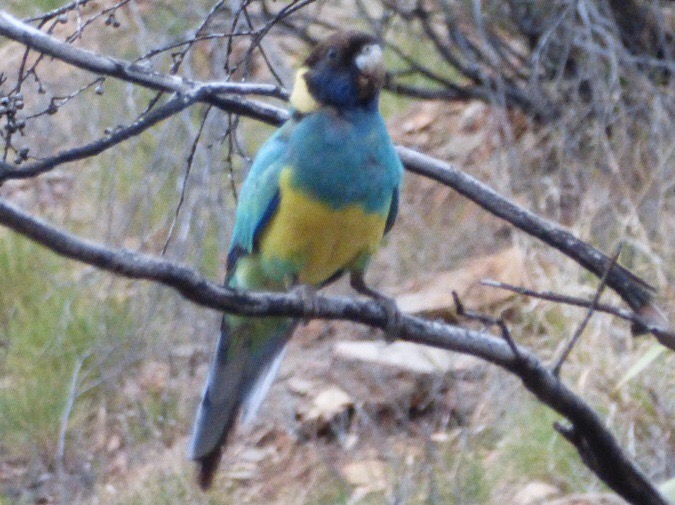 I got to camp at 6:20pm. It is a paid site with flushing toilets, but unfortunately no faucets or trash bins. There was a water tank like at the other sites, but the water in the toilets was somehow recycled and that’s why there weren’t any faucets for hand washing. The campground also had gas ranges that I was looking forward to cooking on instead of the methylated spirits stuff I’ve been using (which I’m also trying to conserve). It turns out the range is just a hot top for cooking BBQ directly on I guess. It wasn’t hot enough to boil water, but a nearby camper had extra gas in a canister he was ditching and gave me that to use. With actual cooking, I am using more fuel than I’m used to and want to conserve it just in case. If I didn’t camp here, there is restriction from camping in this perserved area for a mile on either end. With the rough terrain, I would have been stuck back quite a bit on a ridge. I don’t like to pay, but I think it’s only $5 and Peter gave me a free ticket he got from the company that shuttled him out. Thanks Peter!

I got the tent up just as it was getting dark and sprinkles fell a bit later. The heat finally broke and it is nice and cool for sleeping. It was nice to stretch my legs today, but I’m looking forward to a more relaxing shorter day tomorrow. 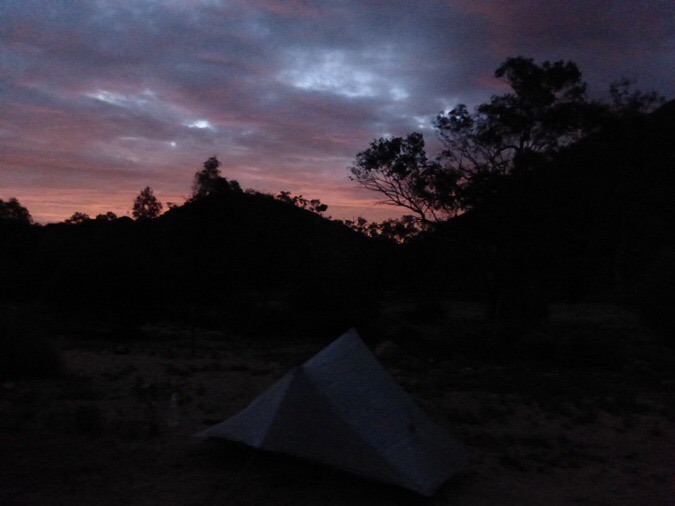