I didn’t sleep great last night. Temps dropped into the upper 30s (3.3C) and, even though I wasn’t wet, the dampness in the air always makes it feel colder. I woke up as the sun was coming out, and thankfully the skies were clear. I checked the weather and it should be clear today and tomorrow, but then the wind and rain picks up again a couple days from now. My schedule is good to make it to town in a few days, so if I take advantage of the two nice days, I won’t have to do as much on that last forecasted rainy day before I go into town. Since I wasn’t sleeping, I decided to go ahead and hike. I got started at 6:30am, and for the first few hours of the day, I wore both my jackets and my beanie. About an hour into the day, I got service and was able to put the blog up. It is a pain when I don’t have the service at camp. Especially today when it was cold and I would have wanted to keep walking. I hadn’t seen anyone in 24 hours, until I heard a noise and this is what I saw this morning. 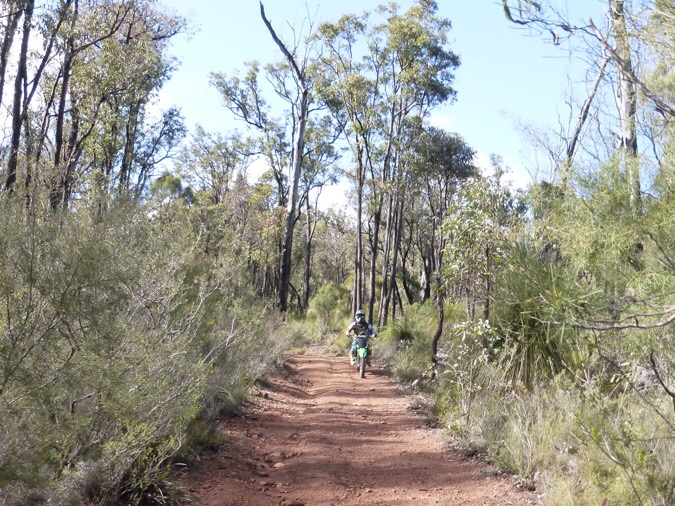 The track should be closed to just walkers, but it obviously is used by motorbikers and mountain bikers. The guy stopped and was really nice. He claimed he wasn’t aware that it was a walking trail, which is understandable because it is an old road and the trail hops on and off of them quite often. However, there are a great deal of barriers purposely left across the old road that are there to obviously discourage the joy of motorbikes and mountain bikes. It was funny because when he came up to me and claimed to not know, I was standing right next to one that I had just walked through with a notch thin enough for someone to walk through, but obviously not moved for larger traffic. When he went to turn around, he even rode right through what was intended to be a barrier and turned around and came back through. He was quite nice about it, and I feel like if I was in the US, he would’ve told me to shove it and would’ve continued on.
As I hiked up the road further, I could see all the areas where he had either gone over what was in the road, or had gone up off the road to go around whatever barrier was there. It does say clearly in my guidebook that the roads are closed to vehicles. About an hour later, even saw another car on the road that was supposed to not have any vehicles, so that is confusing.

The morning was pretty uneventful, so I decided to take pictures of the different trees. Since I’ve done the flowers, and the trees seem to be noted often in the guidebook, I figured why not. There are only a handful of different types out here, and for the life of me, I can’t remember them. Maybe this little exercise will help. There are others I didn’t see today that I’ll try to remember to post if I see them. I think these are right… 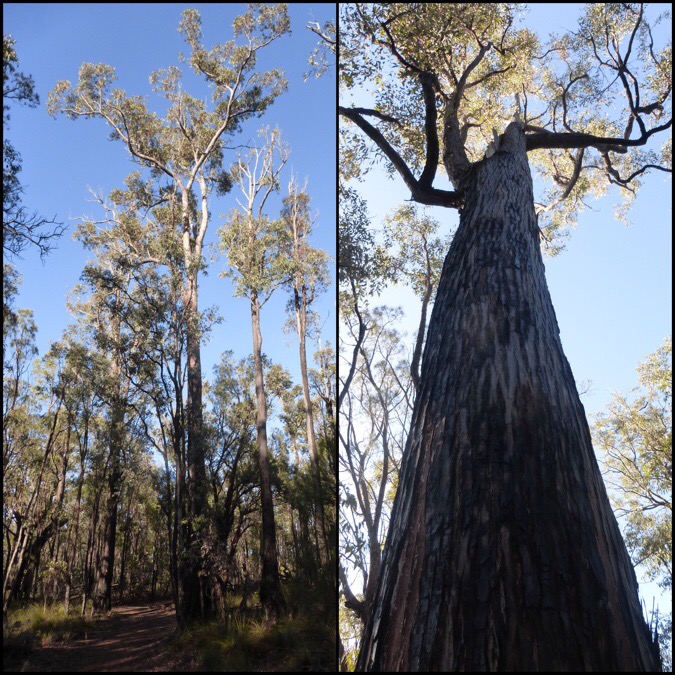 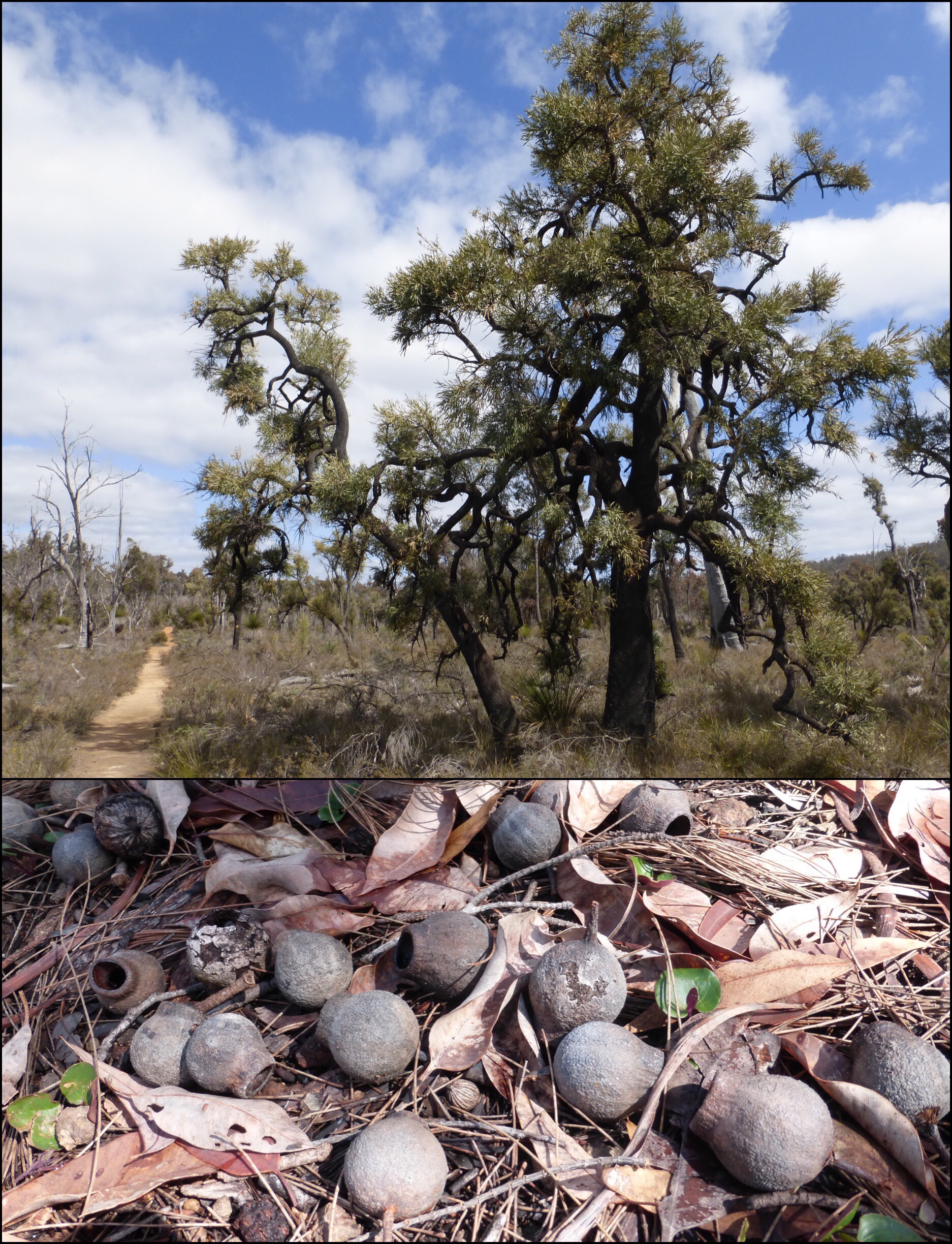 Marri (red gum) with annoying honkey nuts that are easy to roll an ankle on. 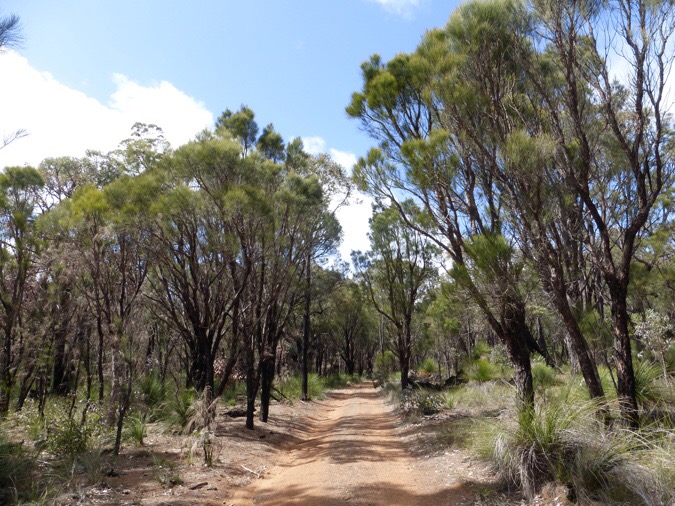 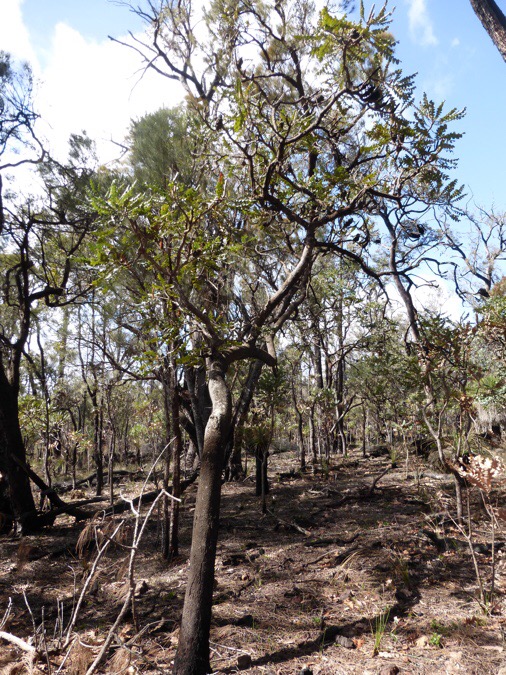 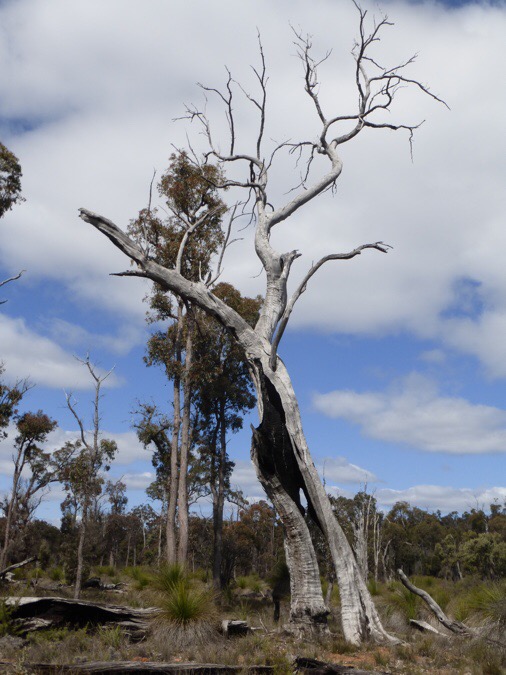 Wandoo (white gum). Not a great photo, but my favorite. 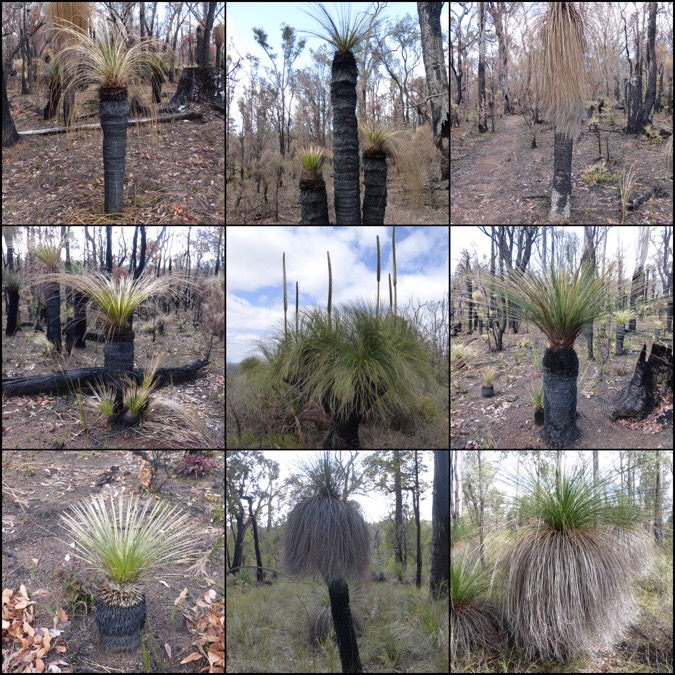 I don’t look too far ahead on this trail, and just look as far as the next section to water, which tends to usually be just a few hours tops. It wasn’t until right before, that I realized I was doing what is considered two of the more challenging sections on the whole track. The range that the Bib follows is called the Darling Range. Today, I went over three peaks along that range. The first one was Mt Cuthbert. It was a short walk up with nice views of the range. This day really reminded me of the Appalachian Trail. It’s just like when you’re down in the woods for a long time, and then you finally get up to a viewpoint, and it feels more exciting then it normally would. 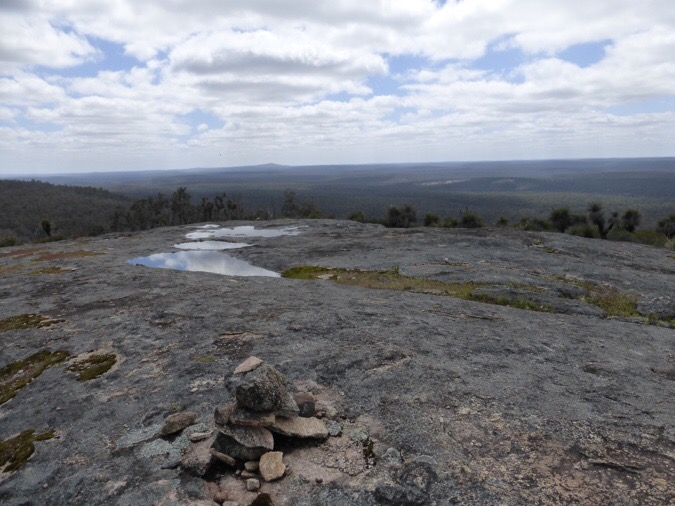 Looking back where I came from. 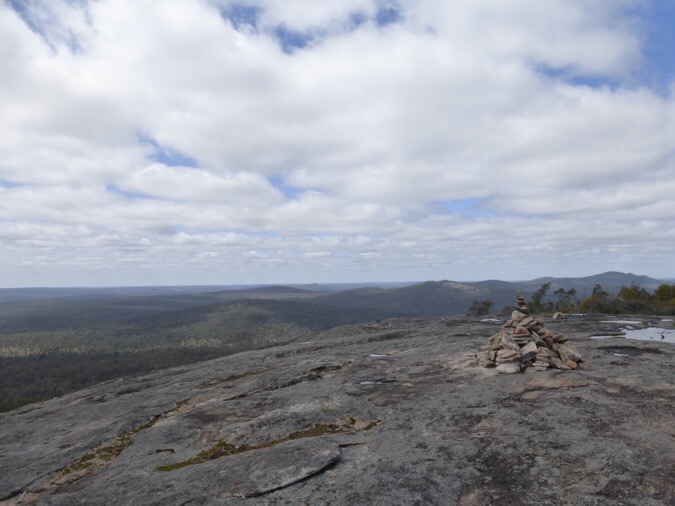 I did see six people in varying pairs while I was up there. It seems to be a popular area that goes through Monadnocks National Park. While I was eating lunch at the top of Mt Vincent, a father-son duo with packs that seem to be doing a section walked by. I was off to the side and we waved but did not speak. I enjoyed my lunch on top of Mt Vincent and could see the upcoming Mt Cooke. 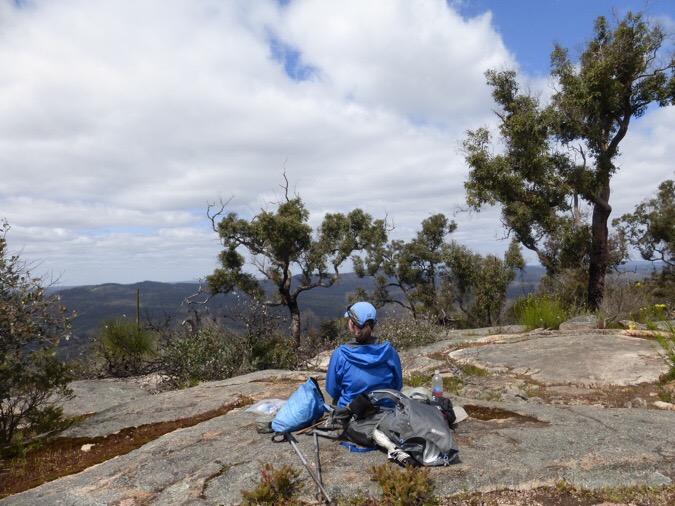 Mt Cooke is the highest mountain in the Darling Range, and was really great. The climb up was not very much at all, but looking back the views were nice. The weather was warmer this afternoon, and I was able to be in a t-shirt on the ridge. I am really lucky that I didn’t have this section yesterday. The rock that I was walking on can get very slick and still had some slick spots to be careful of going down. I was also told that in the morning, it can be quite foggy up there, so I feel really fortunate to have gotten the experience that I did up there. There was hardly even breeze, and the lighting was just perfect. It really made my day and gave me a boost. 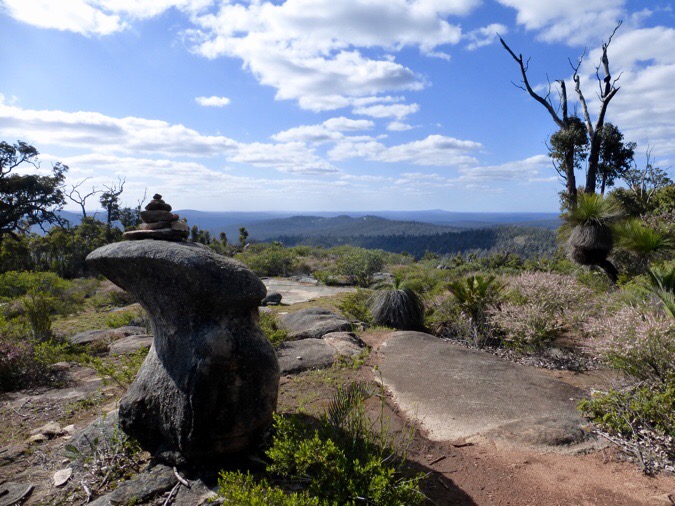 Looking back towards Mt Cuthbert and Mt Cooke. 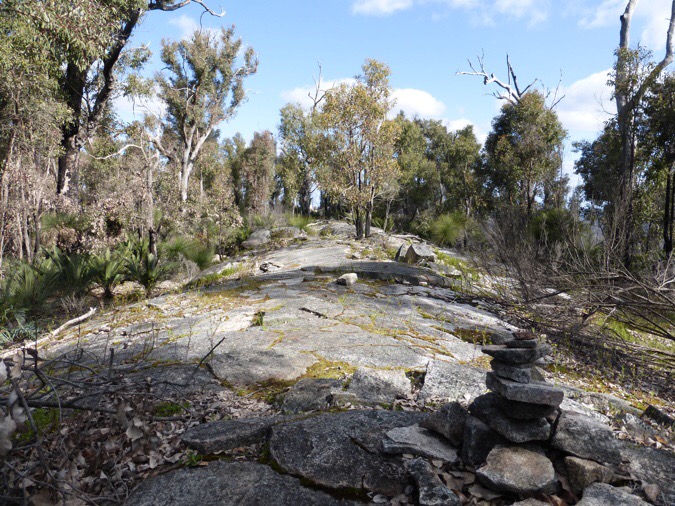 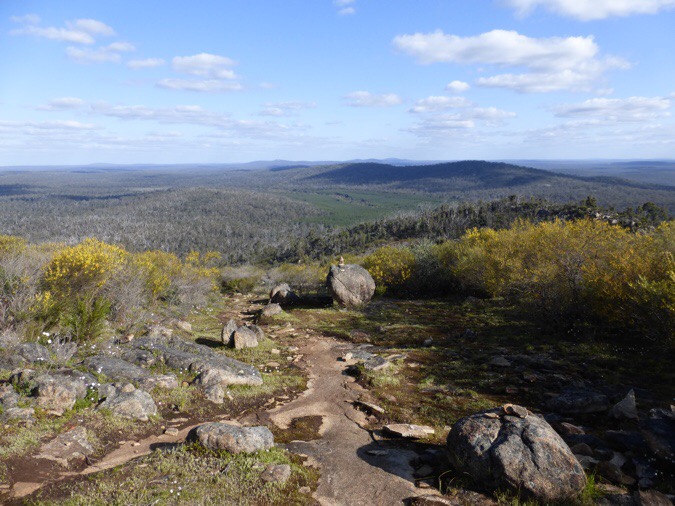 Another thing that boosted me today, is that I seem to have finally left the deep burn area. There is still some remnants of burn from many years ago, but that more recent burn area has passed. I am getting to see older trees that are not completely blackened and they have green on them. I didn’t realize it until I walked into the section and all of a sudden, it hit me. It was quite a feeling to come into something that was alive after I had only really experienced it as a burn. It was quite the feeling and really was something to experience that I didn’t expect.

They aren’t all burnt! 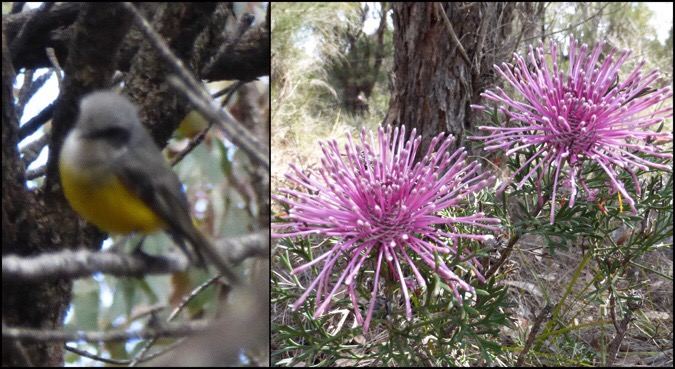 A new (blurry) bird and flower.

I do have to say that I was looking for a trail that would be relaxing, and today I got it. The last few days were an adjustment, and there was weather affecting yesterday. Today was just perfect. I didn’t come out here for the scenery as much as I did to be somewhere that I knew would be quiet and allow me to walk for long periods on my own. I am pretty happy that it is what I had hoped. I am enjoying being in my own head for much of the day. Today was the first day I listened to music since I started. I just feel like I’ve needed some space both physically and mentally for quite awhile, so I purposely put this trail here to allow for that. I know it may not make for the most entertaining blog, but it’s just what I need right now. Again, there will be quite a bit of woods in the coming week or two, but it will become some of the most spectacular hiking when I reach the coast in the final third of this hike. I think that, by then, I will be ready for that. Right now, I’m enjoying this calm and relaxing quiet space.
The day ended with some awesome multitasking trail, that just cruises. People have asked me if I dictate my journal entries, and I never have, but I have been able to use that feature a lot lately while walking on the multitasking trail and answering emails. I realized today that I could try it when I ended the day with such good multitasking trail. It totally works! I was able to do most of this while just walking on a level wide path and dictating it. I love it! I wouldn’t always be able to do it, because I need to have something mindless like a clear path to focus. Any other regular trail requiring more focus, and I wouldn’t be able to do it. Plus, it makes enough typos that I do need to go back and edit it later, so I really don’t think it would save me much time overall. Also, it does drain the battery much more. 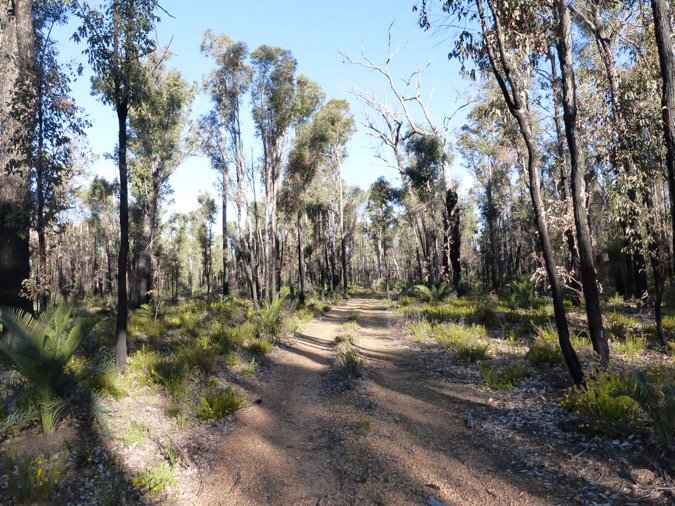 I didn’t intend to go as far as I did today. I thought that Mt Cooke and the trail after it this afternoon was going to be much slower. I expected to dry camp after Mt Cooke, so I actually carried all the camp water I thought I’d need over Mt Cooke. When it was time to stop nice and early at 5:30pm, I noticed I was less than 30mins away from the shelter. The time it would take me to walk there was totally worth the ease of not dealing with the tent tonight and tomorrow morning in the cold. Also, there was nothing that was calling to me as a nice camp spot. These damn shelters. I’m totally brainwashed now to go to them! Who would have thunk it!? 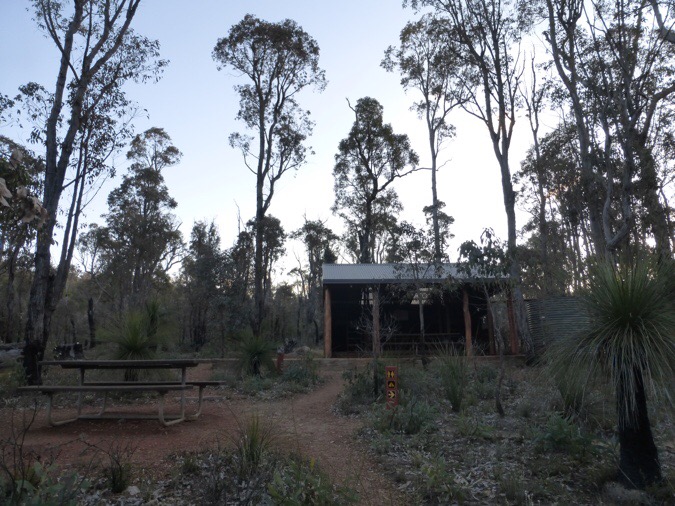 Plus, I was seeing animals! It was so much fun! Things in the bush kept skirting off before I could approach them, but I got a good sight on 5 wallabies and one kangaroo. They just bounce right across the trail 30 yards ahead of me and I don’t get a shot at them but I did catch one good shot of a wallaby. 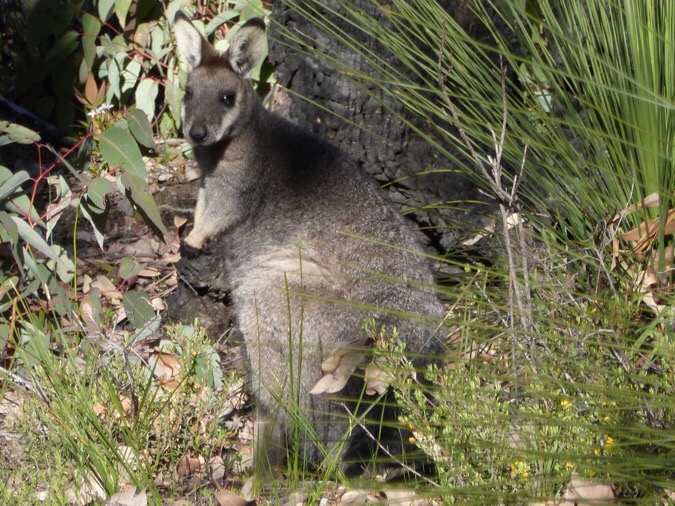