After the big day yesterday, I was looking forward to a relaxing one today. Today I was going to be on a relaxing stretch, I was going to finish early, and I was finally going to watch a show (I’ve started the Bloodline Netflix series)…or so I thought…

Temps dropped overnight and it was a bit chilly this morning down in the canyon the camping was in. I waited a bit for the sun to get higher before packing up and left at 7:30am. I wore my down jacket as I hiked until I warmed up. With the cold air, I totally forgot that on my walk out, I wanted to see the Ellery Creek water hole. I saw a photo of it in the guidebook and it seems to be the attraction at this spot, so I wanted to see it. I was bummed when I later realized that I forgot. 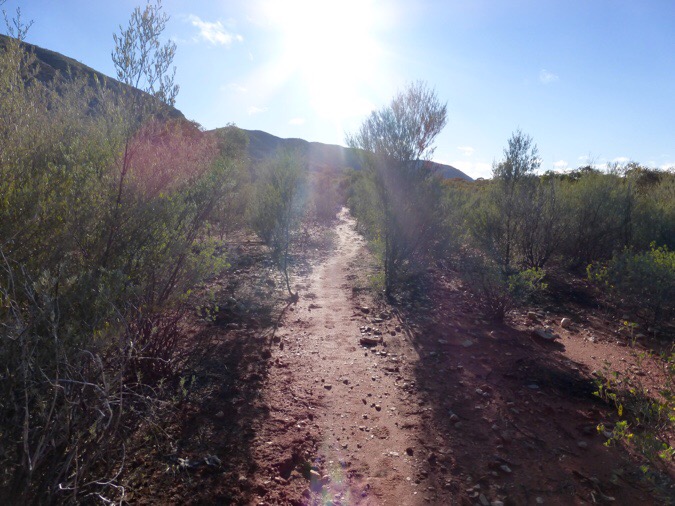 Bright morning hiking into the sun.

Soon after the campsite, the trail comes to a steep drop and I could see the terrain I’d be dropping down to and would be on the rest of the day. 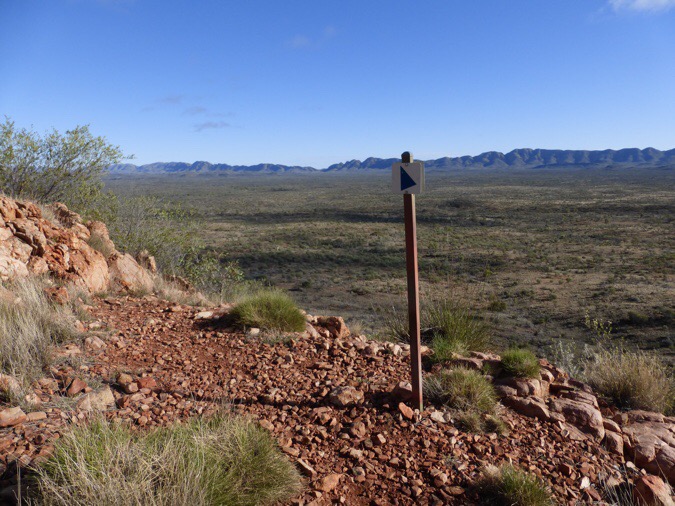 Looking down at most of my day ahead.

It was pretty flat going today with some rolling ups and downs from time to time earlier in the day. The mundane day was welcomed and I listened to hours of Bryson’s Australia book, which has been perfect to listen to while actually hiking in Australia. 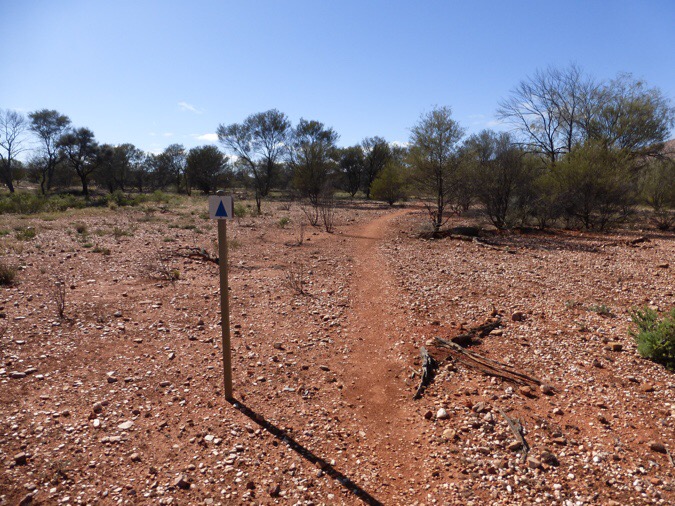 I am really glad I made the extra effort to hike in this part of Australia. It’s remote and took more time, money, and effort to make it out here, but it’s worth it. My favorite part is how vast the space is. I’ve never been somewhere that felt so vastly free and open. The skies go on forever and I love the clouds. It all feels so large yet calming at the same time. 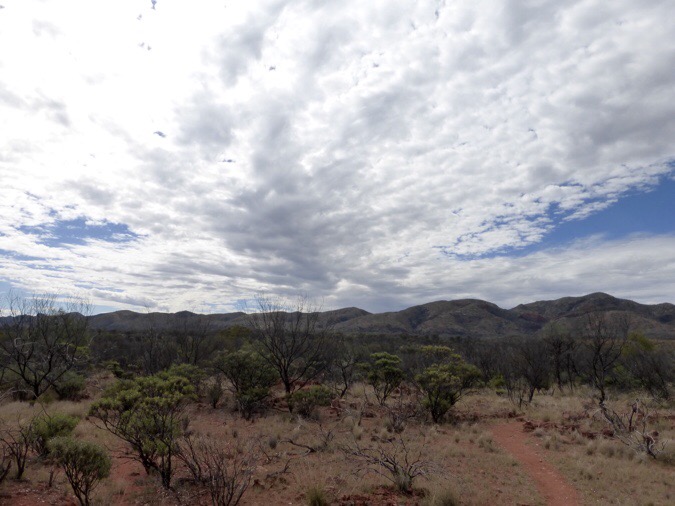 What I am not a fan of is the rock out here. I think what I’m mostly walking (or stubbing my toes on) is called red quartzite (if that’s a thing). Whatever it is, it’s hard. I wore my old shoes from the high routes this summer that were already pretty bald and torn up since I knew this trail would eat up any pair I wore. I had hoped for softer trail today, but much of it had rock scattered across it that made for a less fluid stride and painful feet. Maybe it is not having something else to distract me, but today I could not stop focusing on the pain in one particular foot and my pack on my shoulders which ached. None of it serious, but enough to make things uncomfortable. 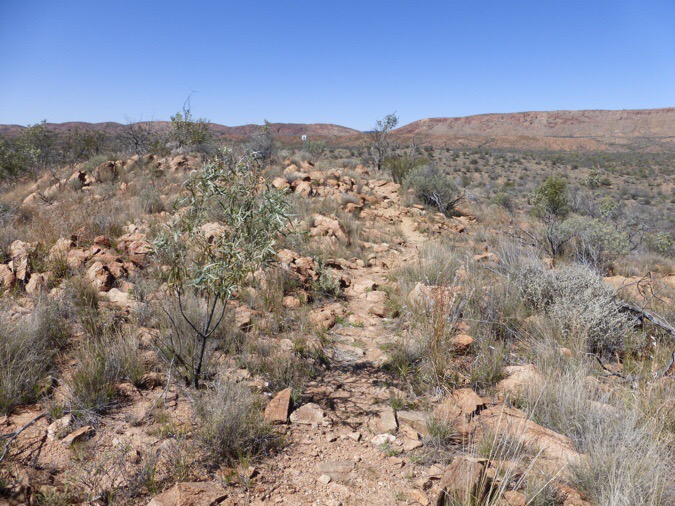 Another thing I’ve yet to talk about is that the guidebook consistently describes the route as crossing streams or creeks. They are even colored blue on the map like a real waterway. It’s just confusing and odd when they are just sandy washes. At least this trail has hikers crossing the washes. On the Hayduke, we’d ridiculously be waking right in the deep sandy wash for hours. Thank you Larapinta creators! 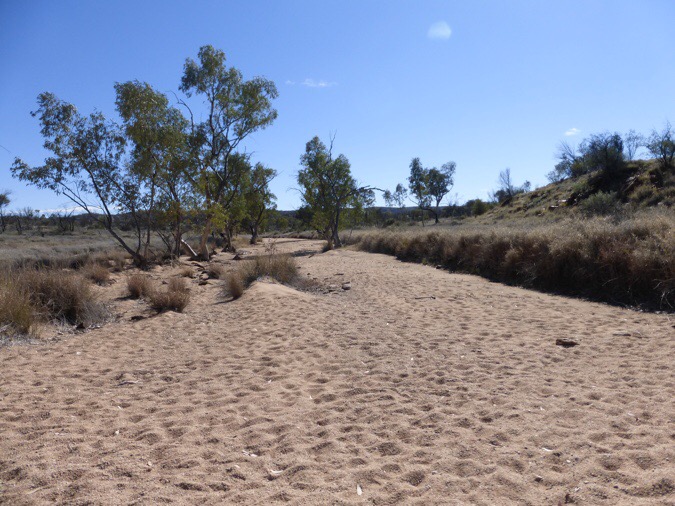 Around 11am, I reached the next campsite and water tank and took a longer break than usual since it was a short mileage day and I needed to take my pack off and shoes off. There was a nice shaded spot next to the water tank that miraculously didn’t have ants crawling all around. I don’t think I’ve mentioned that I’ve yet to find a spot that I can fully lean back and relax at a break because there have been ants crawling quickly all around everywhere I’ve taken a break. They are everywhere out here! I indulged in this break and had my pink lemonade and some Doritos. My pack had way too much food, but I just haven’t been super hungry. I’ll finish with at least a day of extra food and possibly two at this rate. 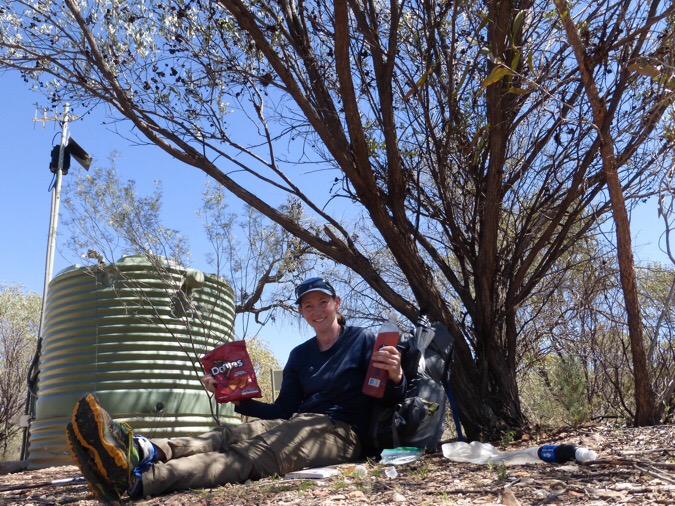 As I had my break, birds flew all around and sang. The birds out here are quite hyperactive. It’s really frustrating for me who wants to see them, and who also wants to get photos of them. I even tried videoing them, but they move so much and quickly that it wasn’t working either. I did get one bird photo today. Again, from a distance and not super clear, but I was pretty proud to get a semi-decent shot. 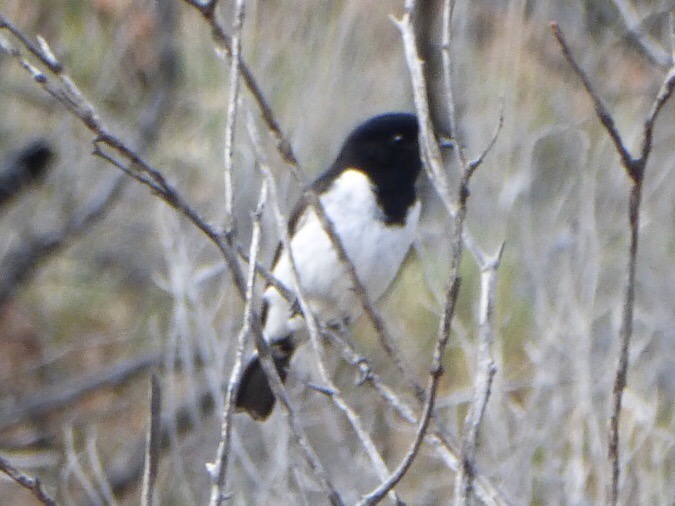 A couple hours later, I got to a great little campsite called Ghost Gum Flat (Ghost gum is a white tree). The best part about the site is the elevated table or tent pad. Ants were all over, but somehow hadn’t figured out how to get up on the platform. It was great! I lounged in the shade and ate my lunch. 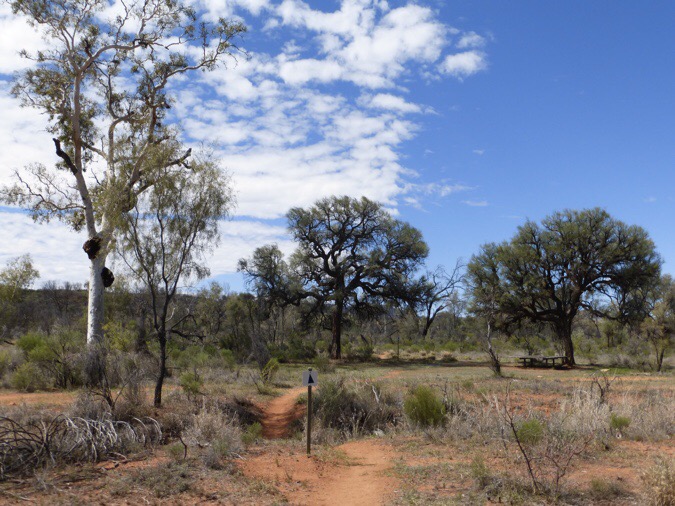 Ghost Gum Flat with the ghost gum tree on the left. 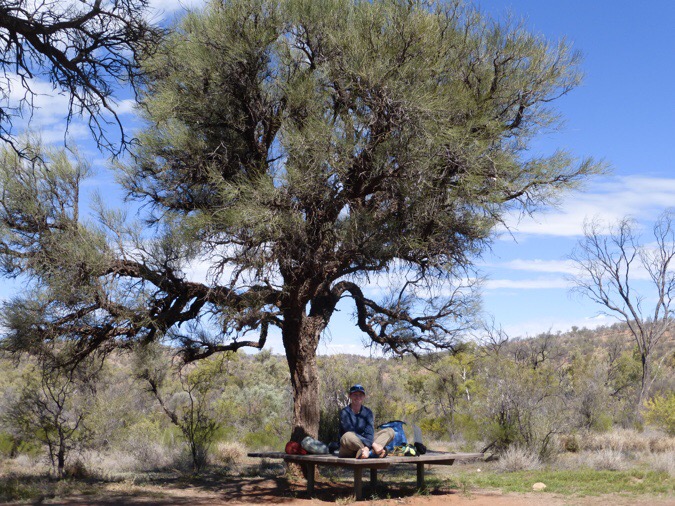 With less than two hours left of hiking, I was relaxed and quite content. The last hour into Hugh Gorge camp was on soft red dirt trail that my feet loved! It made all the difference and I was reenergized. I got to the camp at 4:30pm and had it all to myself. There was a nice shelter, but I was liking the camping area more. I laid down in the shelter and read on about tomorrow and also read Buck-30’s journal from that section. I’d skimmed it before and knew it would be tough tomorrow, but what I’d failed to do was look at the camping options for tomorrow night. If I stayed at Hugh Gorge Shelter, the camping options for tomorrow had me stuck between a really short day or a killer long day. After reading Buck-30’s experience, I realized I needed to go another 2mi/3.5km to set up a less brutal day tomorrow. Still brutal, but less brutal. Those miles would be going into Hugh Gorge, which begins the challenging and very slow going terrain of rocks, sand, and water. Those couple miles took me an hour. Dang it! No show tonight! Ugh, I was so looking forward to relaxing. 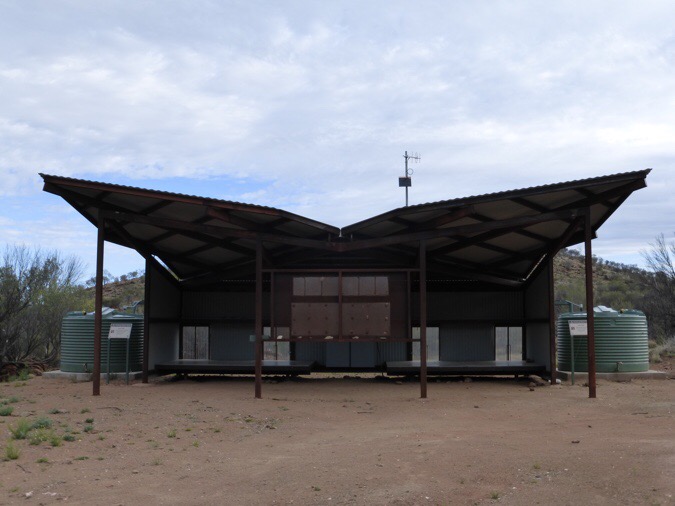 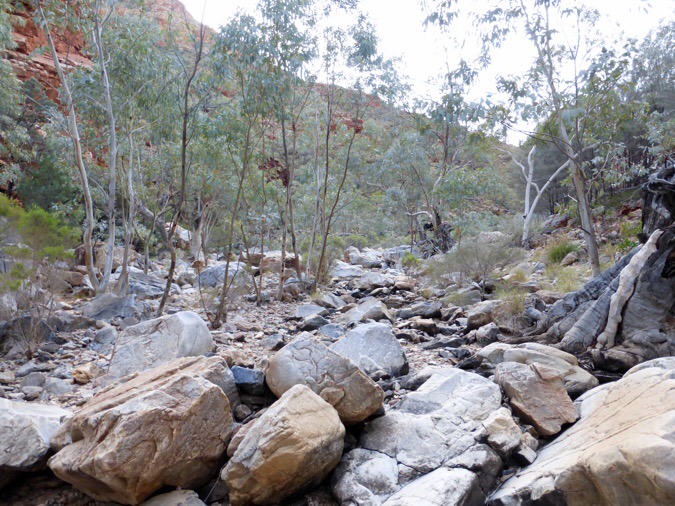 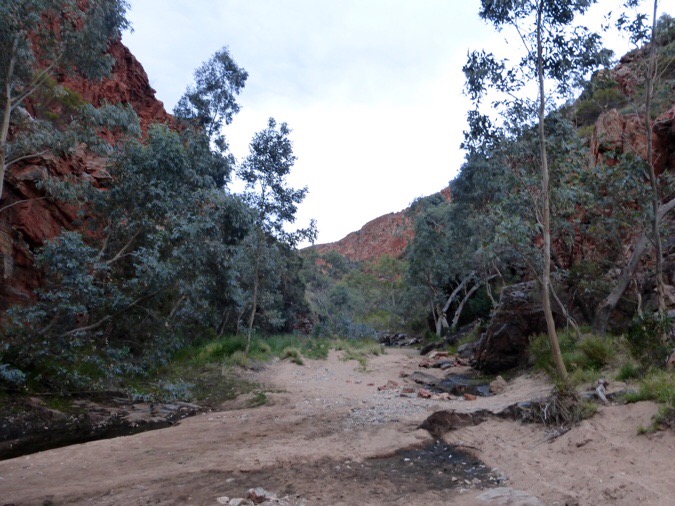 Again, the clouds were looking more ominous at the end of the day and I did those miles as quick as I could fearing rain. Right when I got to the campsite at Hugh Gorge junction, the rain started to fall. I quickly got the tent out and started pitching it while the rain got harder. I paused to grab the umbrella and put it over my pack while I finished pitching the tent. That’s when I realized that the umbrella was gone! Shit! What the heck!? I somehow lost it again! Ahhh! I just got this one before I came to Australia since I lost the last one about a month ago on the Kings Canyon High Route. How did I possibly lose it again!? My guess is that maybe it was at Ghost Gum Flat and maybe it rolled off the platform. I have no idea. Shit!

I finished setting up quickly and the rain tapered off after a bit. I sent an InReach message to the person hosting me in Perth before I start the Bibbulmun. He has the same umbrella, so I’ll use his if mine isn’t found and returned. There are trail registers here, so my plan is to leave a note about the umbrella with my contact info if anyone behind me picked it up. I refuse to ask Gossamer Gear for another umbrella after they just gave me this new one. They do sponsor me, but I don’t deserve a third umbrella to be sent all the way over here if I lost the other two. If mine isn’t found, I’ll take the one in Perth and send my host there a new umbrella. I have to say that the InReach is great since it lets me text from almost anywhere to anyone. It’s a relief to have a plan if it isn’t found and returned. I’m so pissed at myself! Of course tomorrow is the forecasted day for rain at 40% chance. I have rain gear, but I would have loved to have the umbrella! So much for the relaxing day with how this one ended. Tomorrow looks to be the most challenging terrain of the trail with lots of rock hopping, so I hope it doesn’t rain much. Man, will I ever learn to stop losing gear!? So annoyed. We all knew it was coming. Some things never change I guess.

One last thing I want to mention is that I got the whole day to myself today, and that was really nice. It’s a unique experience to get a whole day without seeing anyone else and I really enjoyed it. Ok, fingers crossed for no rain tomorrow. 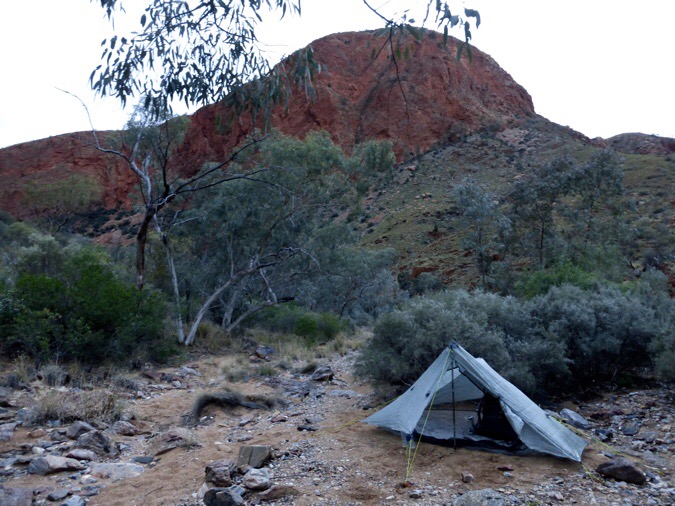