The night was the quietest and calmest yet in Australia. Nights like last night, things are so still that I forget I’m even outside when I awake in the middle of the night. I had irresponsibly stayed up late with my good internet connection and slept in this morning since I was in no hurry. Once again, I was well positioned to see sunrise right from my comfy sleeping bag. I don’t think the Bibbulmun Track will have quite this much elevation to see the sunrises and sunsets as well as I have, so I’ve been soaking them up out here on the Larapinta. 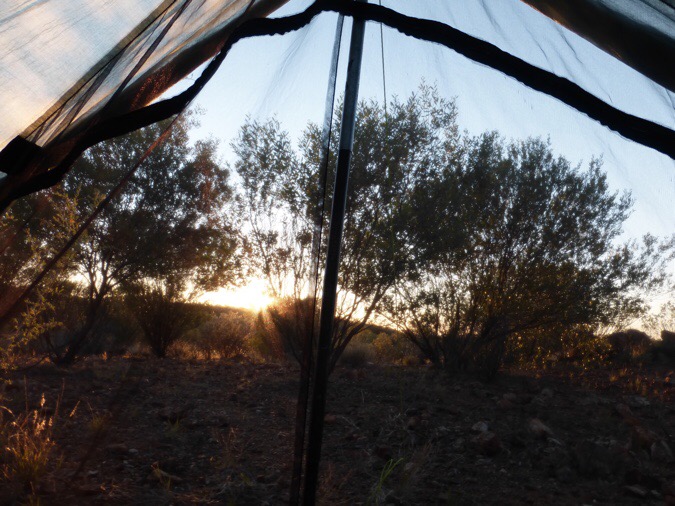 Taking in one last sunrise.

I was happy to have found a nice spot well off the trail, but what I didn’t like is that these little burrs were somehow attaching to everything. After getting up a couple times last night to pee, I awoke to all of this stuck to the bottom of my flip flops. I kept finding them on me and my pack all day today. I even still found some after I did laundry later in the day. 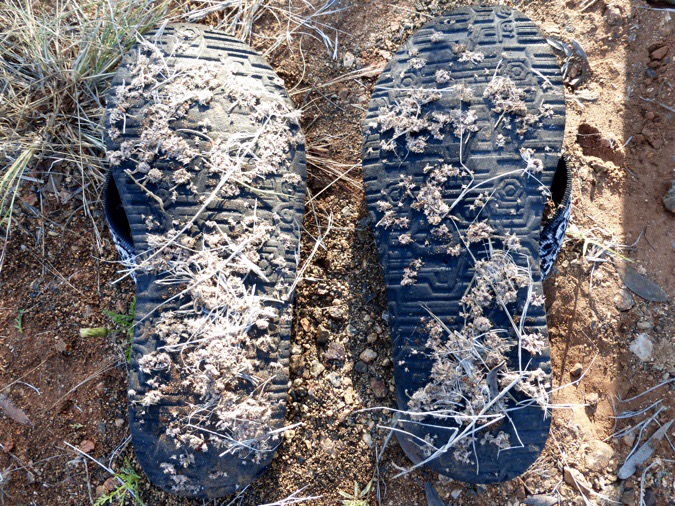 With me being on the other side of the world and phone service less frequent, it’s rare that I get service at a time that I can Skype with my nephews while hiking. I love doing this with them and got a chance to do that this morning. As I was hiking and talking to them, the most surprising thing happened! When I rounded a corner, I had a kangaroo right next to me by the trail! I was so excited and shocked and trying to show my nephews at the same time that it took me a bit to then get the camera out for a shot. I’m so excited that they got to see the kangaroo! I think now that they think I see them all the time like at the zoo, but it was exciting. 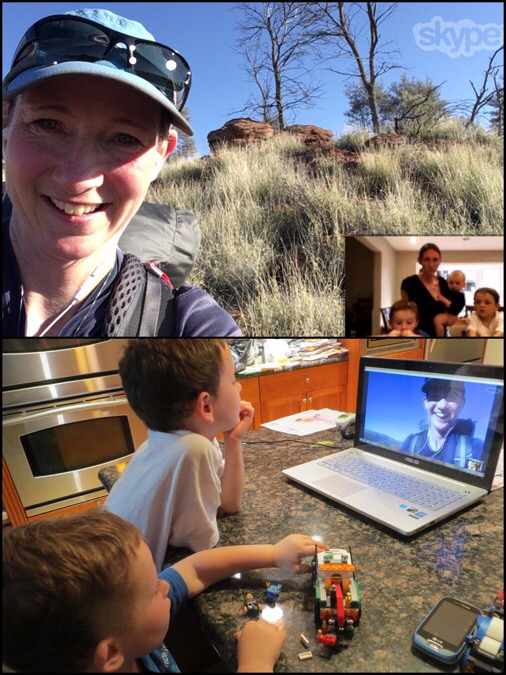 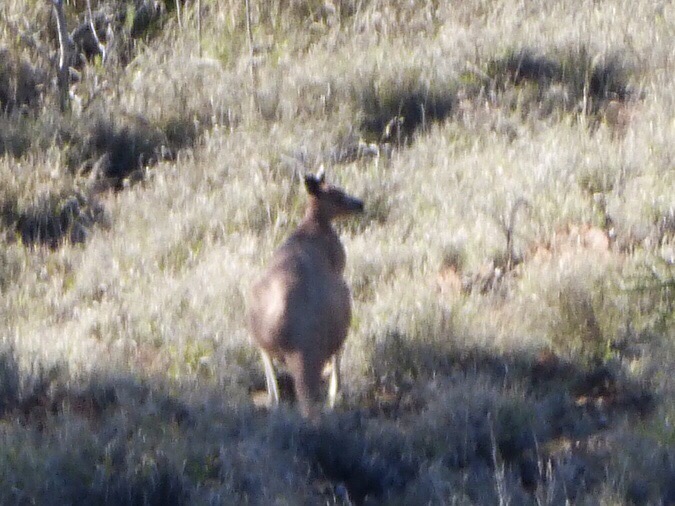 All morning, I had noticed marks in the trail that I was trying to figure out. I didn’t even think that it could have been a kangaroo tail! After I saw it, I saw the marks all morning and some footprints that looked like this, which I’m guessing is also kangaroo prints. I love that the tail makes a mark in the path! 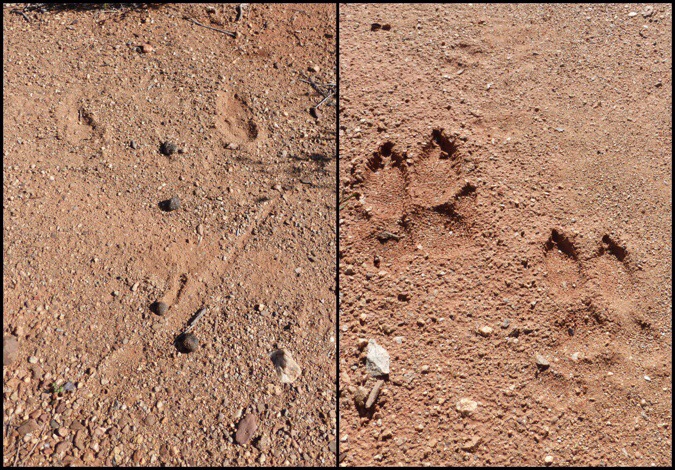 The hiking was nice with rolling hills all morning and a mostly clear path. 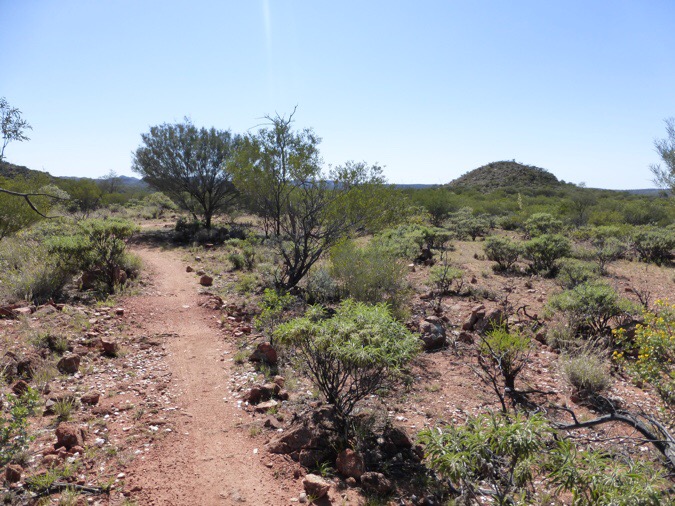 The other big sighting of the day was that when I crossed the railroad tracks towards the end of the trail, a passenger train was actually coming. I knew my nephews would find this way more exciting than the kangaroo, but was in a dip in the trail, so I missed the Skype opportunity. They loved the photos though! Seriously, they are obsessed with all the lines around the world and have Amtrak trains and everything. These photos and the kangaroo pretty much seal the deal as the coolest aunt ever in their minds, ha! 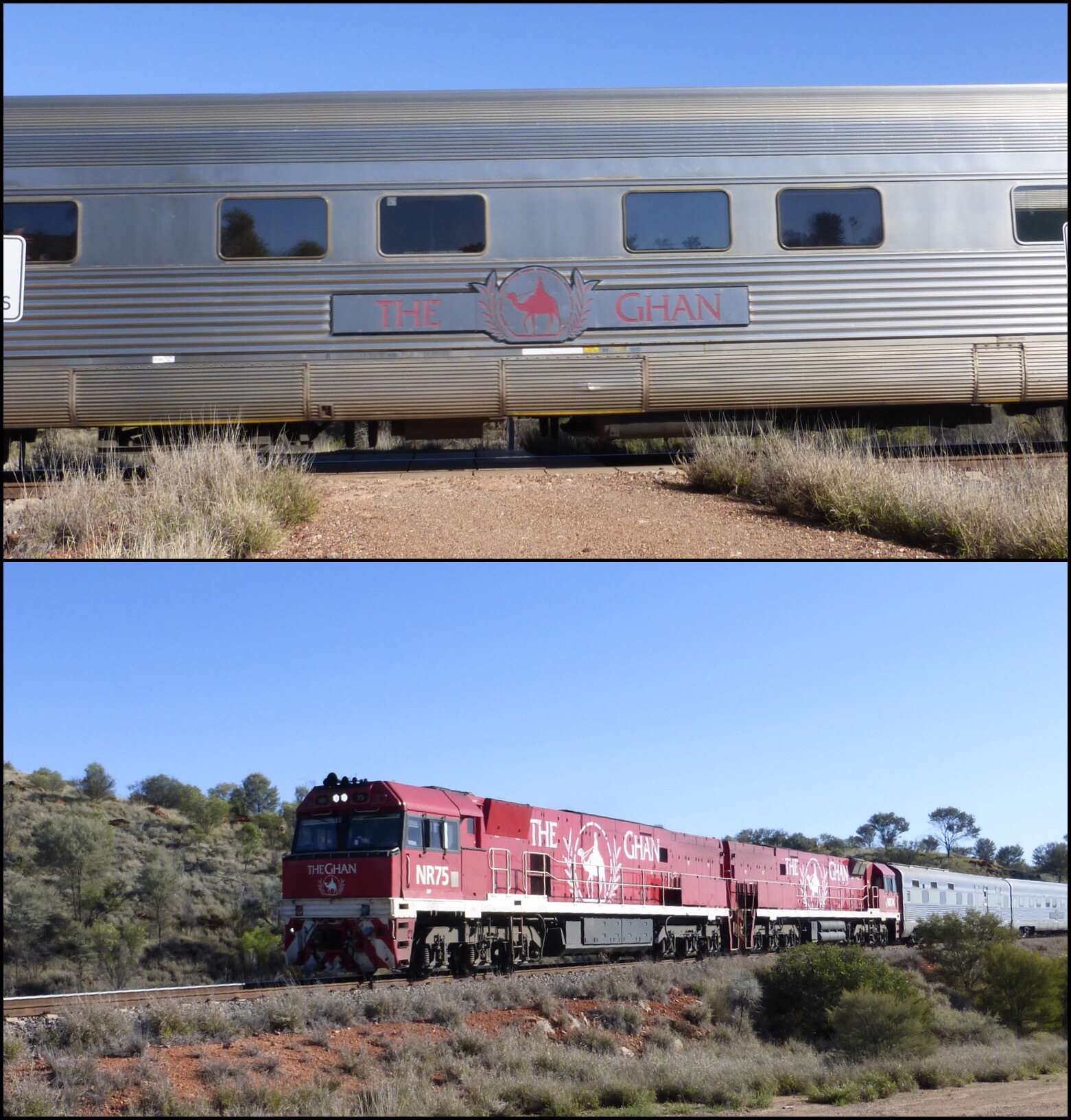 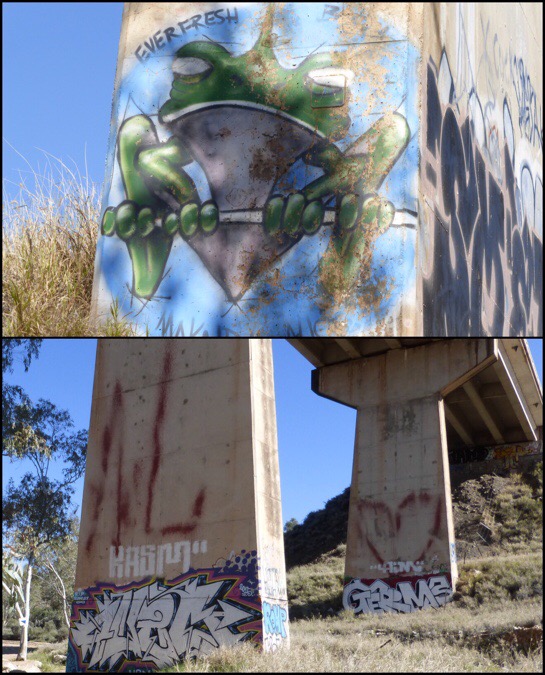 I will quote John Chapman from the Larapinta Guidebook for this next section of trail along an old rocky road I hiked on. “This was the original ‘road’ from Adelaide to Darwin and the first car passed through here in 1907 in an unsuccessful attempt to cross Australia from south to north. The same two people returned one year later and completed the crossing. Parallel to the road is the Overland Telegraph Line that, from 1872 to 1928, was Australia’s only direct link to the rest of the world. Remnants of the old poles and wire can still be seen.” Pretty cool! 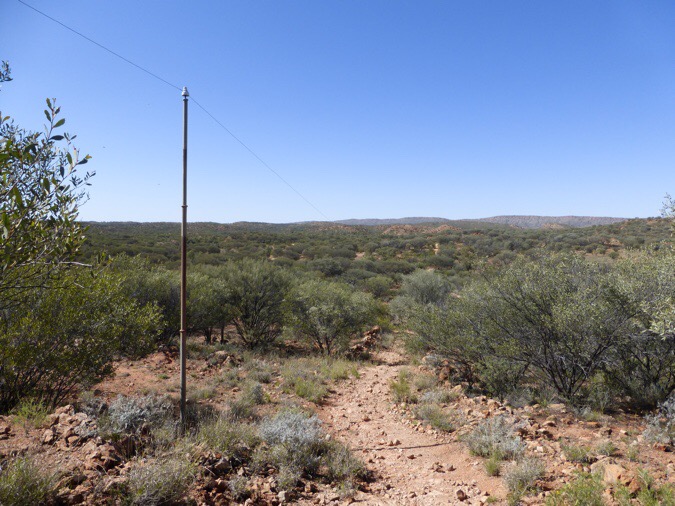 Historic rocky road and remnants of the Overland Telegraph Line.

I made it to the eastern terminus of the Larapinta Trail and fortunately, there was a man that had been running that was kind enough to take my finish photo. Wahoo! What a great and challenging trail! I have to say I totally recommend this trail, and it is incredibly unique and exposes you to what I feel is the heart of Australia that few truly get to experience. I will say that I recommend people take more days than I did. I felt that I would have done more side trips and would have liked more relaxed days. Many take at least 12 days to do the hike and that makes a lot of sense if you have the time to do it at a more relaxed pace. With the ability to cache through a company a few times over the trail, it really does give a lot more flexibility in having shorter carries between resupplies rather than carrying all 9 days like I did. It’s a welcoming trail, but also quite quite challenging with the unknown weather factor always playing a major role. I’m sure this is one that I could return to and have a completely different experience each time with so many variables and changes due to weather. I’m really glad I made the effort to come to the more remote Northern Territory of Australia and spend such quality time in the vast and challenging terrain. 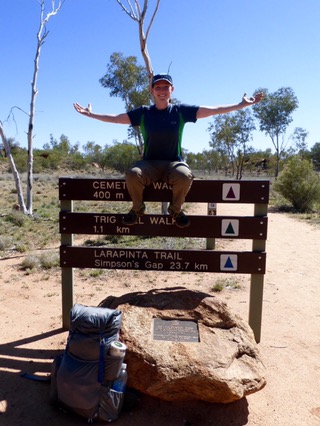 Eastern terminus of the Larapinta Trail! 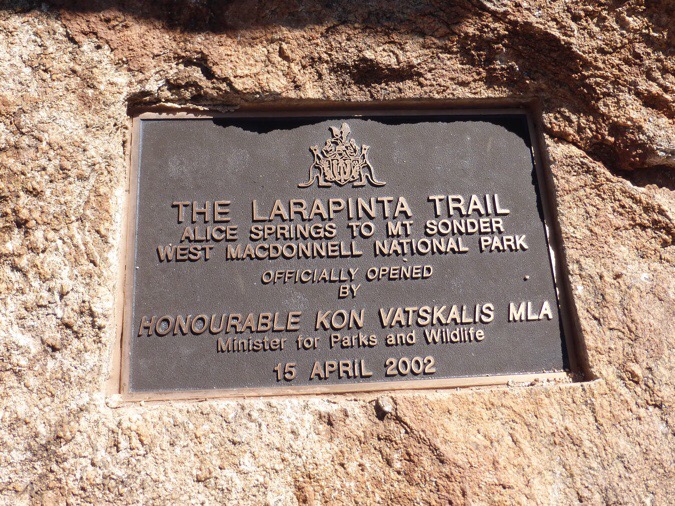 The trail ends just 2.2mi/3.5km from downtown and there is a connector trail that goes along the Todd River and into town. I was excited to make the full loop complete and walk back to the YHA Hostel I left a week and a half ago. 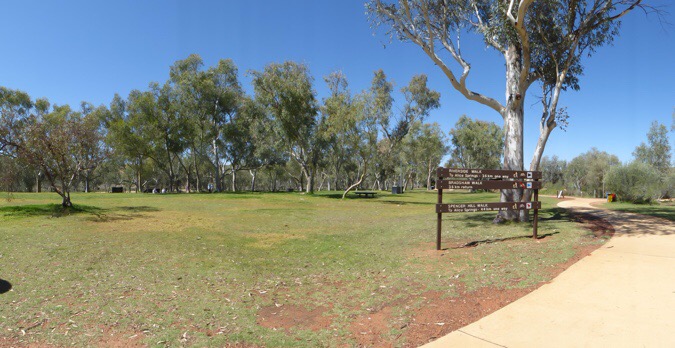 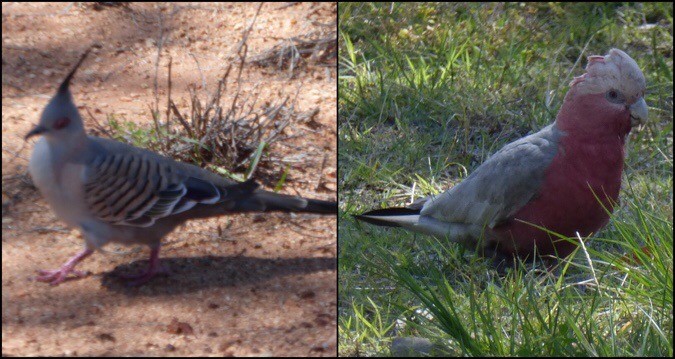 Two more of the unique birds they have out here.

I was super excited that the normally dry and sandy creek bed of the Todd River was running! It only runs a couple times a year and with that big rain a couple nights ago, it had water in it. There was an article in a local paper that this area has had triple the average amount of yearly rainfall already this year and it hasn’t even hit rainy season apparently. Know that I got a much greener hike than most, from what I was told. It must be a big deal as the kids were quite excited to be playing in it like it was a pool. Don’t they know there could be snakes in there!?!? 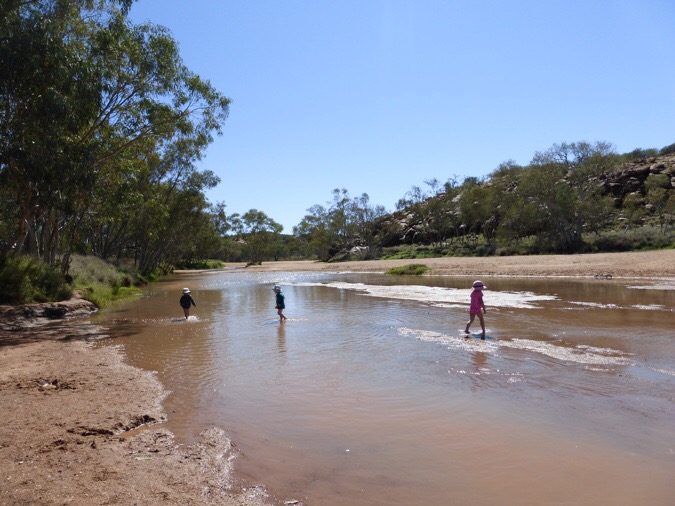 The unique sight of the Todd River with water in it!

I was excited to make it to Piccolos for their all day breakfast. One thing I want to point out. I tend to only eat bacon on trail because I don’t love it, but I know the meat and fat is good for me. I just wanted to point out that here, they cook bacon much thicker and pinker. There’s no crunchy bacon out here! 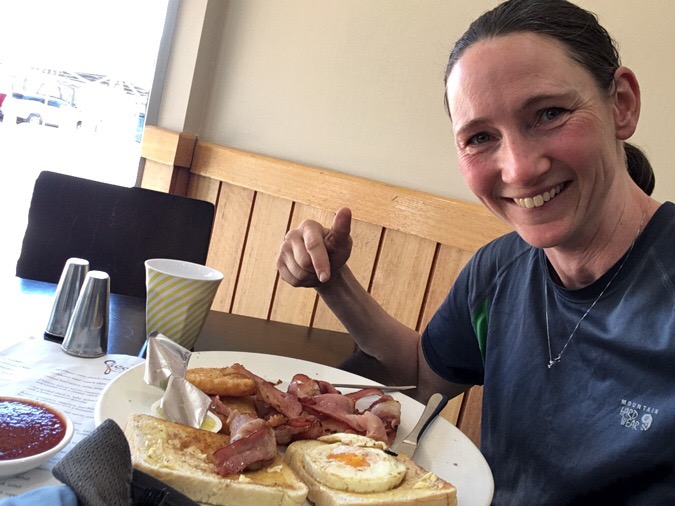 I made it for a hearty breakfast at Piccolo’s in Alice Springs.

When I first came into Alice Springs, it was a Sunday and the place was pretty dead except for many homeless walking around. Midday on a Thursday, it has much more of a small city feel with lots of traffic, restaurants and shops open, and many tourists and shoppers walking around. I had dinner in the same mall area that seemed run down on my first visit, and it was nice and quaint this evening with restaurants open and many out enjoying the evening with lights in the trees (which don’t show up in the photo). It is nicer than the first impression I got last week. 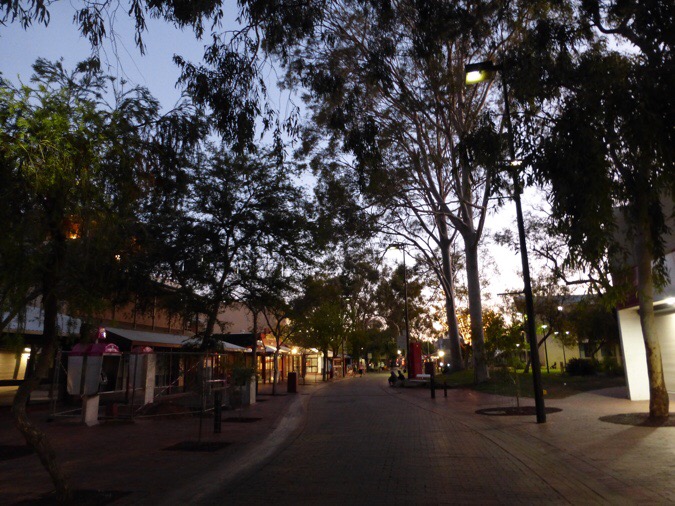 I returned to the YHA and was bummed that when I called last week, the four person room was fully booked and I’d be in the 8 person room. It’s 11:30pm now and it’s nice and quiet in here! I have the earplugs ready to go if needed. It was a happy coincidence that my neighboring bunkmate from last time is also in this room tonight as well. It was fun to see Bianca again and catch up like returning home to a friend. 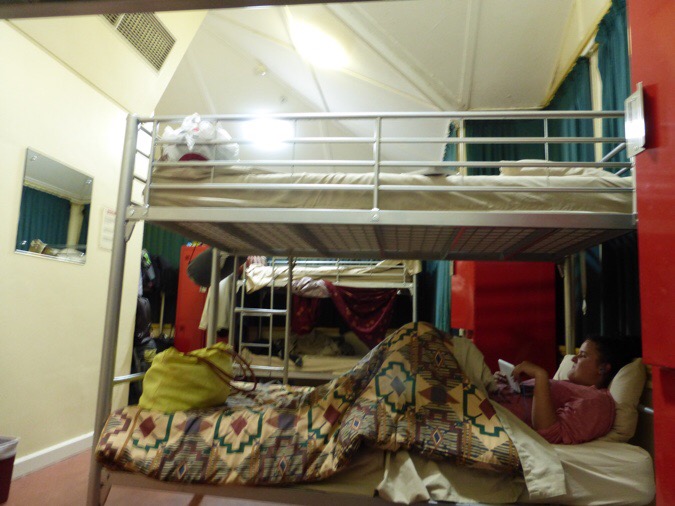 My view from my “tent” tonight:)

Tomorrow morning is my flight to Perth and then I will take a day or two to figure out my resupply for the Bibbulmun and get caught up on emails and such. I didn’t get as much done as I hoped today, but got lots of important bills and logistics figured out, so it’s good to have some of the more looming things done. The world definitely doesn’t stop spinning when you leave civilization for a week and a half. Nope, that’s for sure! Ok everyone, off we now go to the western coast of Australia!