I survived my first of I’m sure many nights in a shared hostel room. I usually avoid communal sleeping situations, but it seems that it may be much more common in Australia and New Zealand and I’m going to have to adapt. Later in the evening, a third gal showed up and bunked on top of my bed. I never met her as she had dropped her things off while I was out and then returned well after midnight when the lights had been out. Thankfully, no snoring. I’m actually worried about myself snoring right now. I can get sinus congestion when I fly and it seems to be acting up with pressure and some blood. More blood than usual, but I think that’s due to the extended time on the plane in such dry air and then landing here. I just hope it doesn’t develop into something worse.
What did keep me up was a bird outside! I almost went out and recorded it. It was a long song that had a pattern of three long songs that then repeated…all.night.long. Think of the Harry Potter song mixed with the tone of a creaking door. I woke up at 5am to my bird alarm, and was pretty wide awake, so I just got up. The Emu Run tour to Uluru that I signed up for picked me up at 6am and stopped at many locations to pick up people. I got to see my first Australian sunrise from through the window of the bus. It was quite wonderful and I’m pretty exited to see this daily as I hike the Larapinta. Not the best photo as it was from a moving bus, but it’s one I want to remember and put on the blog for my personal memory sake.

We rode a couple hours to a little pit stop called Erldunda where there was a buffet breakfast for the group (~40 people) and an Emu farm. I’ve never seen an emu and it was quite entertaining. I might see more as I hike I think, but here’s some less than stellar photos. 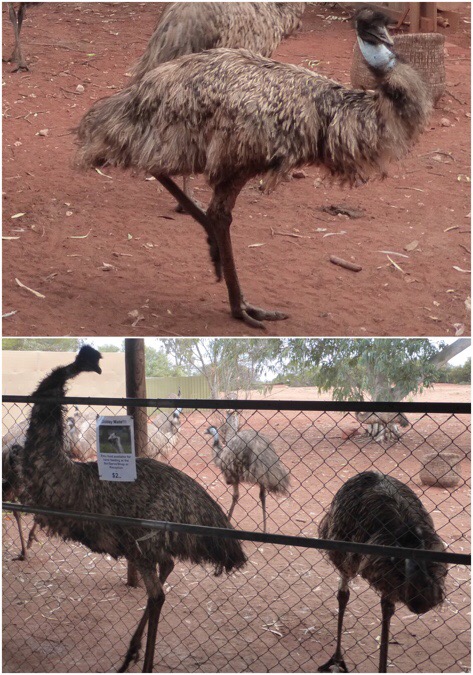 I had taken a funny video of the emus that I was going to take photos from or possibly post a clip from, but I managed to accidentally delete the wrong file and it’s gone, gawh! They were spastic with their necks craning every which way, quickly darting from side. Their larger lower half seemed to have a delayed reaction and would follow the direction of the head a second late, like the tail of a streamer. Fun to watch.
The total drive to Uluru-Kata Tjuta National Park was around 5.5hrs. Along the way, they showed a National Geographic special on the area we are going through, which is known as the Red Centre (rocks often appear red) that also included a segment on the Larapinta Trail, which got me really excited about hiking it. 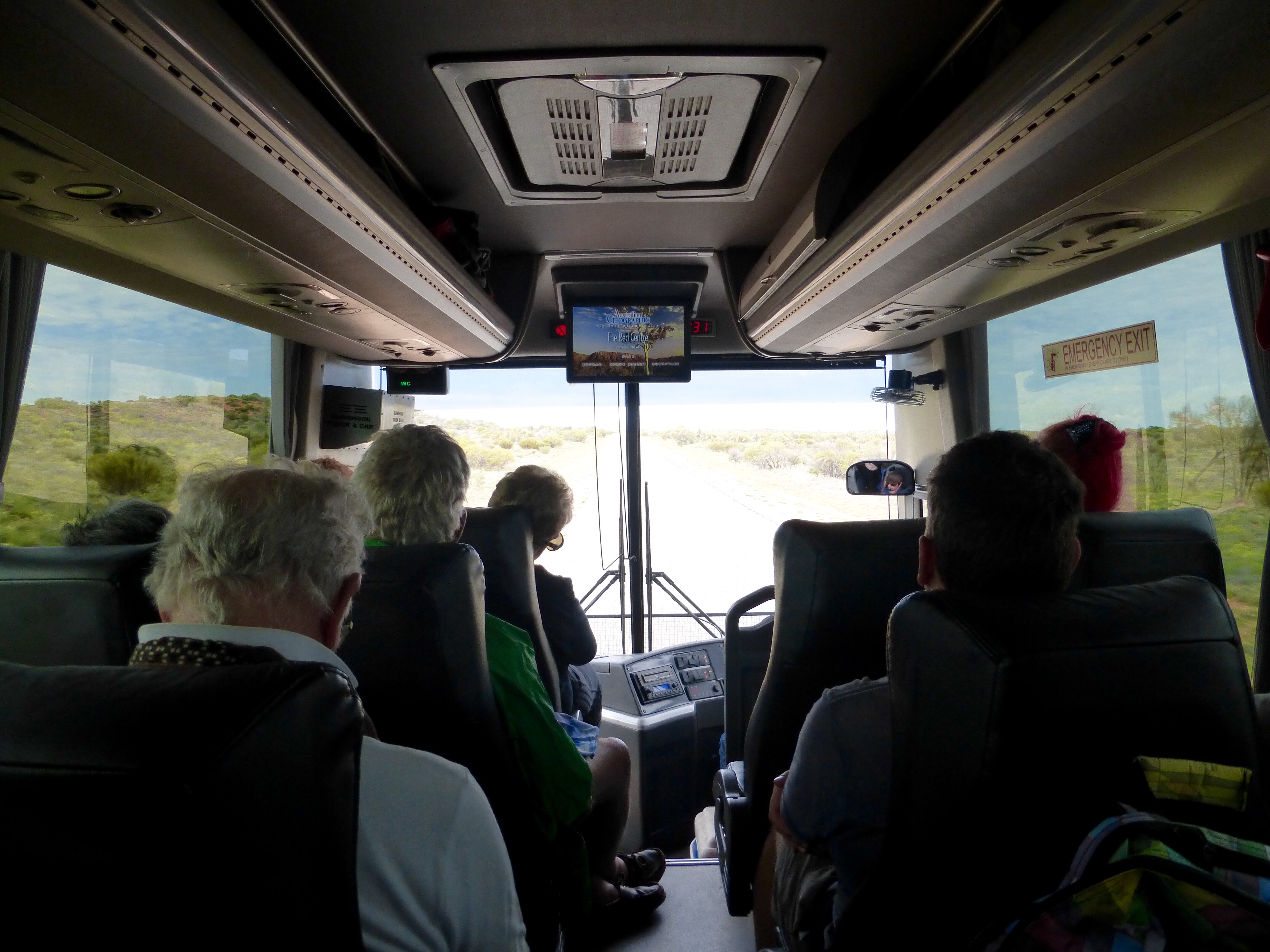 On the bus, I sat with JB, a Filipino college student vacationing in Australia with his parents. We had fun together and it was the perfect pairing to spend time with them today. Good times:) 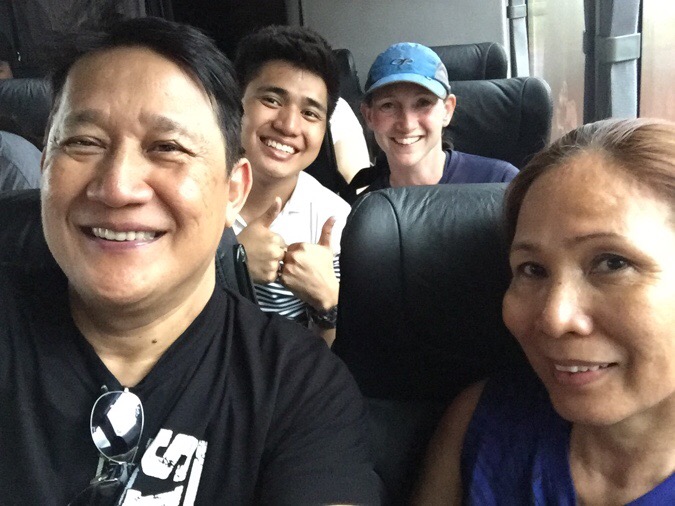 Fun touring with JB and his parents for the day.

Once in the park, we went to see Kata Tjuta, which is a bunch of smaller rock formations. It is pretty cool to see such large formations appear from nowhere after hours of driving along a flat landscape. We were given 40mins to walk in the Walpa Gorge, which was 2.6km/1.6mi. I enjoyed stretching my legs and walking back as far as the trail would go. 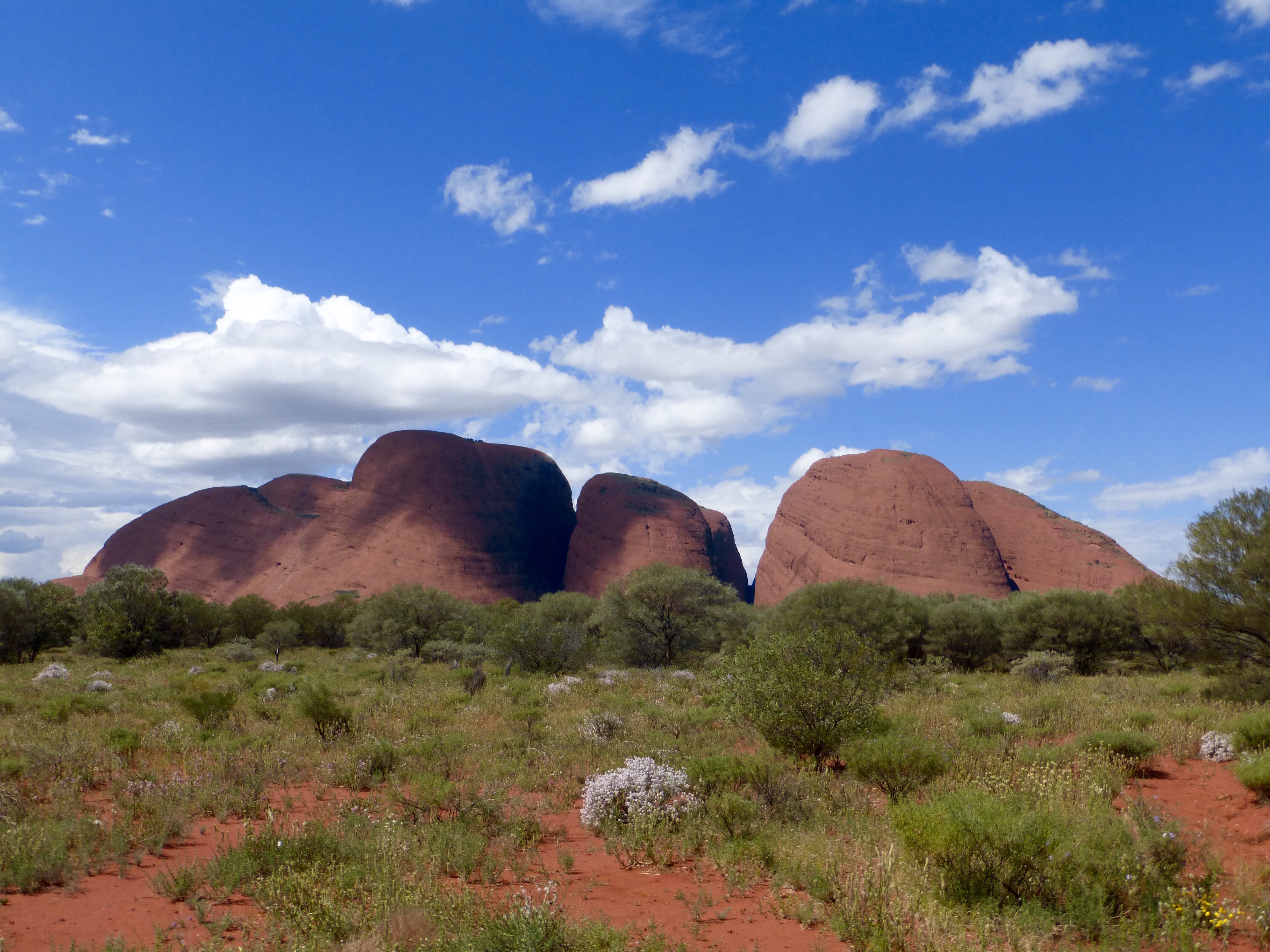 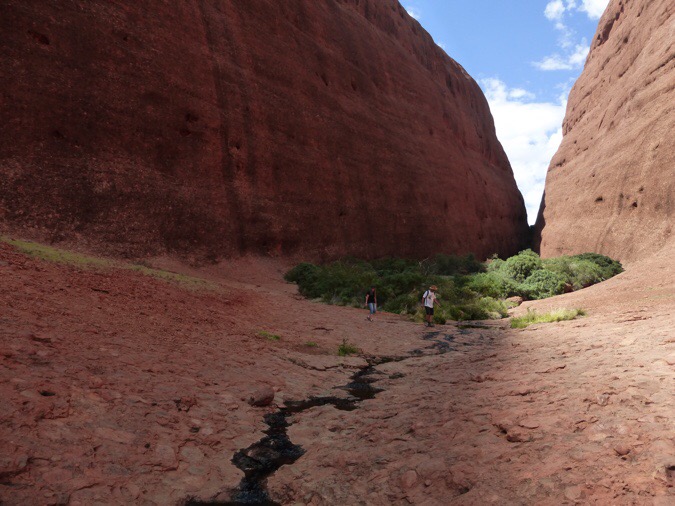 From there, we headed to the main attraction, Uluru (Ayers Rock). Before we went, we got to spend time at the cultural center and gift shop. It’s an interesting system they have going here. This National Park is on sacred Aboriginal land, that is highly destined and a lucrative tourist destination. There is a very fine line that is being walked here, and it’s nice to see efforts to integrate Aborigine culture, but similar to our abuse of Native American land in the US, it felt a bit patronizing. For example, it’s clearly communicated that Uluru is a sacred place, and that the Aborigines wish for people not to climb Uluru, but rather walk around it and take it in at a deeper more reflective level. Then you walk up, and front-and-center is a fully chained formal walk-up to the top. It’s such blatant disrespect! Oh wait, they allowed the Aborigines to put up a sign on why people shouldn’t hike it, so that’s supposed to make it ok!? 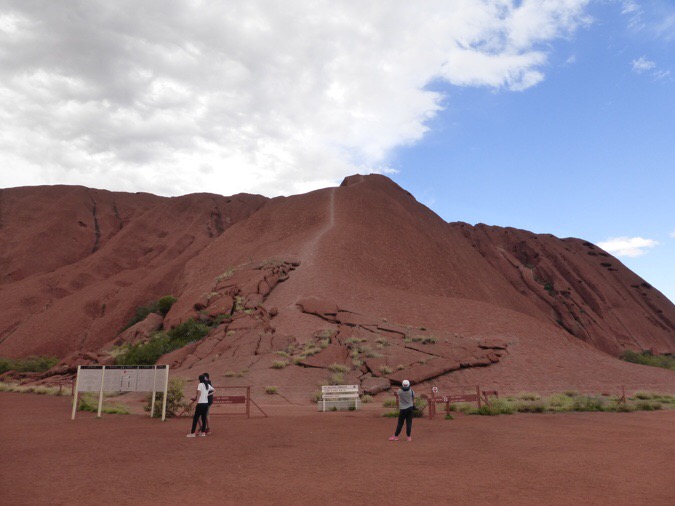 The commercial path to walk up Uluru Rock that reminds me of Half Dome in Yosemite. 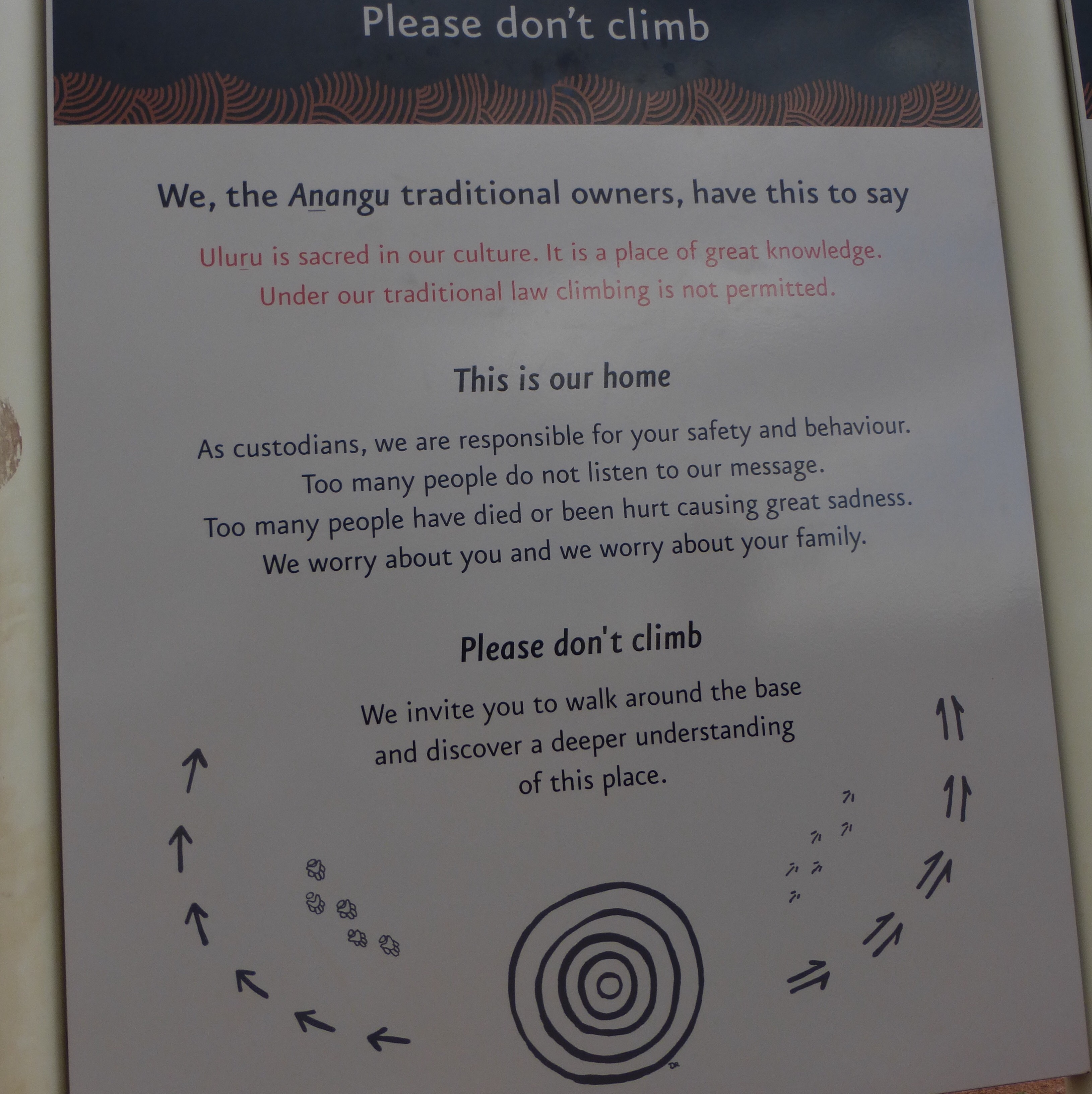 The sign right in front of the formally chained walk-up.

We also got to go to an area called the watering hole that was cool.

As the day wore on, clouds got darker, and thunder rolled. It rained on and off, which is really rare out here. They’ve actually had very high rainfall this year and said that normally it isn’t so green out here. There are also lots of wildflowers and everything is quite lush. It’s just very unique to see the area so well watered. We got to see waterfalls come from nowhere on Uluru as the rain poured down the rock and funneled to the cracks. I am loving it and excited to see even more scenery like this along the Larapinta with more showers forecasted through the week. 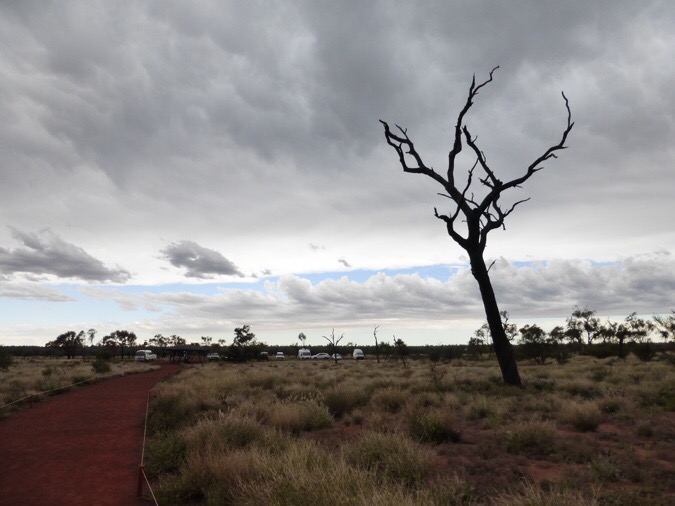 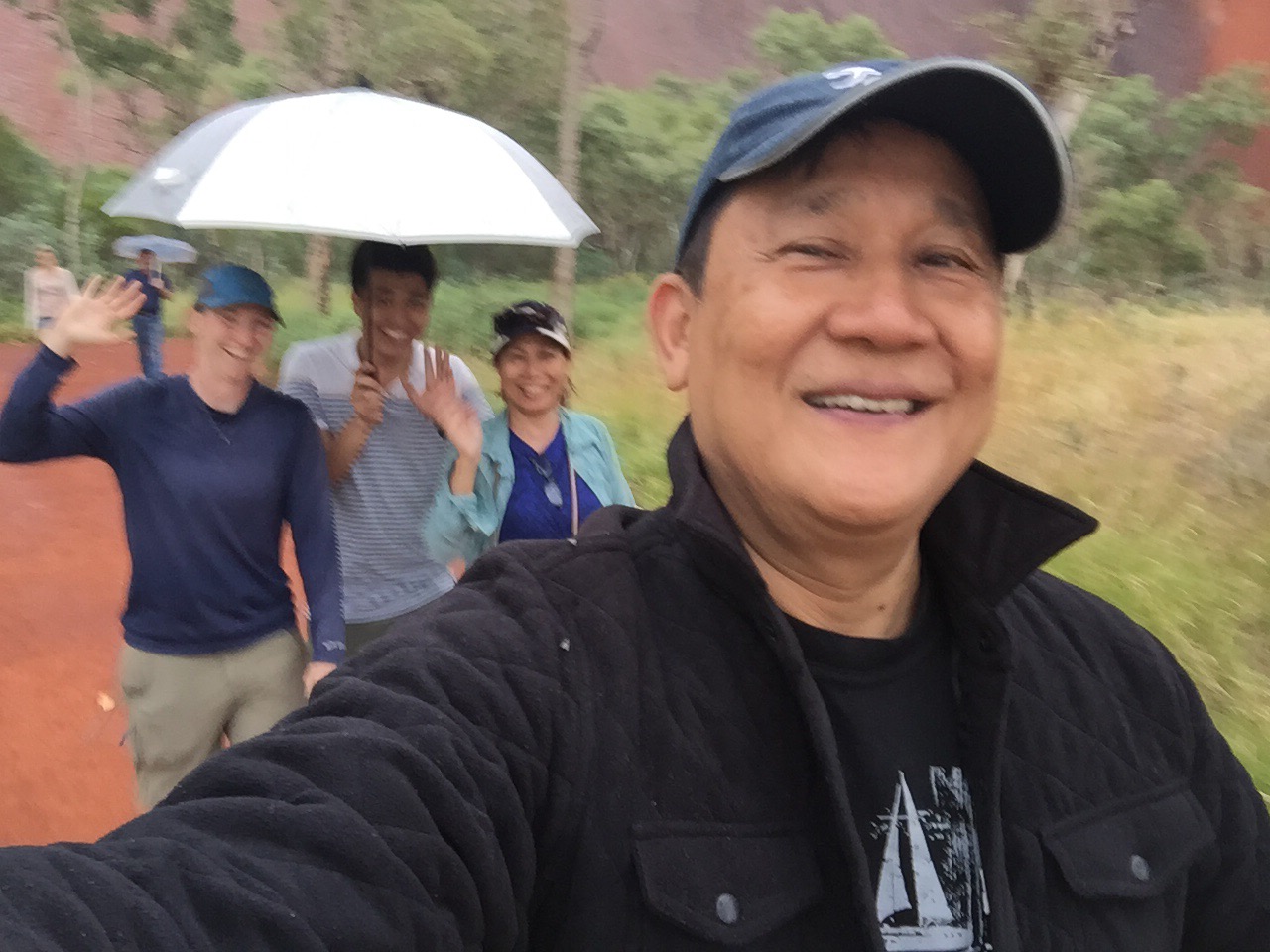 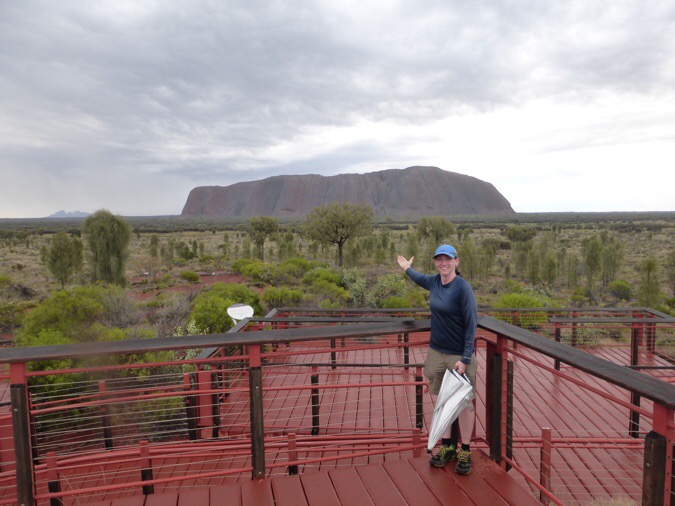 One more view from afar with Kata Tajuta to the left.

This rain does not help my hitching situation tomorrow or the next day from Kings Canyon Resort. Mereenie Loop that I need a hitch on is often closed with significant rainfall. It rained a bunch at dinner time where the tour was scheduled to have an outdoor BBQ as we watched the sunset on Uluru. Instead, we sat on the bus while the guides prepared the food on the grill. Just after everyone finished dinner, the clouds parted just enough to let sun though for just a few minutes. It was a miracle! The sun broke through and everything was gold and Uluru lit up! JB got some great shots as I had to change my camera battery. Terrible timing! I got it right at the end before the gold disappeared. 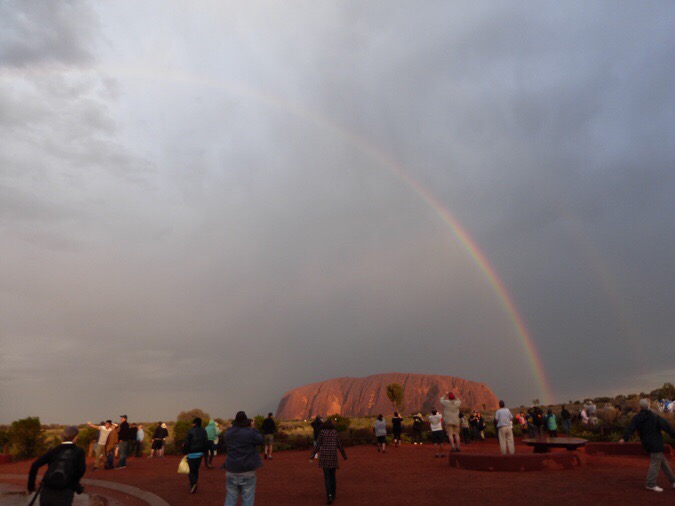 I was still able to get the rainbow just before it disappeared. It was really incredible and unbelievable that we had all that rain, and just for a moment, a full rainbow over Uluru. What luck to have an experience like that! 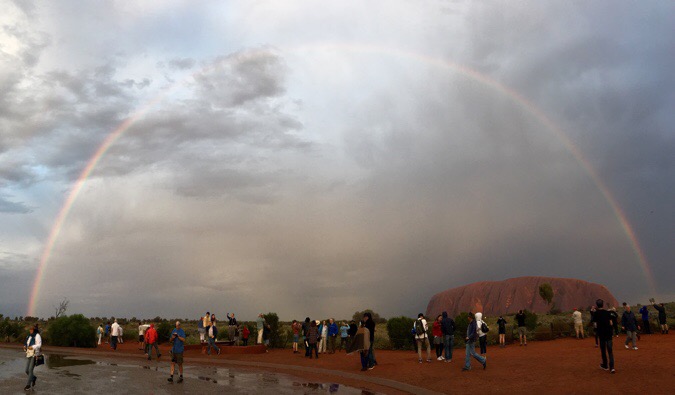 We got back on the bus and 13 of us are staying overnight at Ayers Resort to continue to Kings Canyon tomorrow. We got settled in around 7pm and I’m in a small room with two bunk beds with a mother, daughter, and granddaughter trio from New Zealand. The room is quite bare with tight quarters. A cinder block room with metal beds that makes me feel like I’m in an episode of Orange Is The New Black with these women. They are great and I’m thankful that I got to bunk with them. We are getting picked up at 4:50am tomorrow. No you didn’t read that wrong. It’s hella early! They aren’t messing around with filling the days on these tours, that’s for sure. It’s now 11pm and a live band just finished playing at the resort. I’m super pumped I’m able to post this directly tonight. Fun to have service again after this summer with hardly any service!