I slept wonderfully in that bed last night. It still rained on and off through the night and temperatures dropped significantly. It was quite brisk this morning when I left and it was in the upper 40s/8.8C and breezy. For some reason, my room had a furnace, but Claudia’s didn’t. I invited her to come into my room this morning as I was leaving and she will get to be in there until her husband comes this afternoon. I had offered for her to come in last night, but she was fine in her own room and we didn’t know that it got so cold there at night. I’m pretty lethargic today and it was tough to leave when she was laying there right next to the furnace all snuggly warm in her sleeping bag. I think we both might’ve been a bit envious of each other at that point. 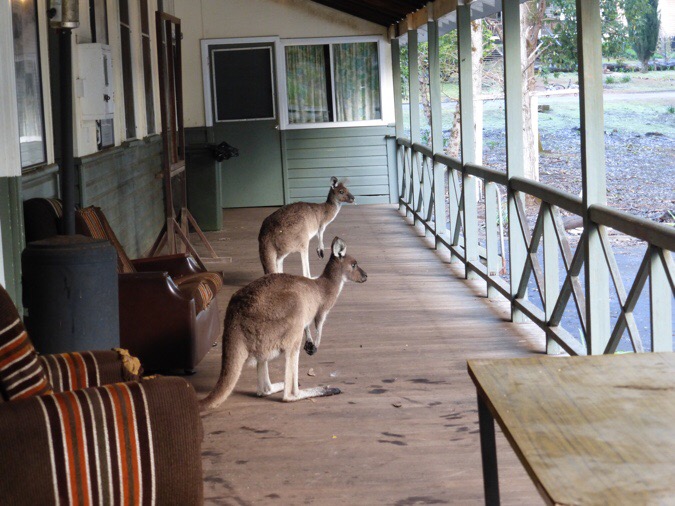 Kangaroos on the porch. 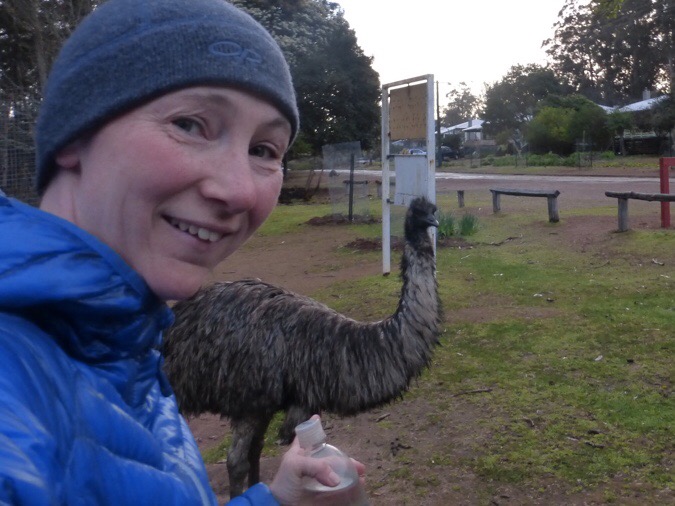 A selfie with an emu this morning. Seriously surreal!

I got started at 7:15am, and about an hour into the hike, I reached back to grab my guidebook, to realize it was gone. Ugh! I had only had it for an hour and already dropped it. I keep it in the same pocket as my water bottle, but I am aware to make sure it doesn’t fall out when I grab my water. I am apparently out of practice because last leg I had it on my phone when I didn’t have a guidebook because I shipped it in the wrong resupply. Before then, I often had it in my rain pants pocket to keep it dry. It’s too large to fit in my regular pants pockets. Anyway, the point is that I dropped it somewhere in the first hour of hiking. I really needed to go back and get it. I put my pack down and set off running to see where I had dropped it. It was frustrating because I didn’t have any headphones on or anything, and it is in a plastic bag, so I’m surprised I didn’t hear it drop. As I frustratingly ran back, I tried to tell myself it was just minutes and not focus on how far back I was going. It took 15mins of running before I found it right in the middle of the trail. By the time I ran back to my pack, I had done 30 minutes of running. As if 25mi/40km isn’t enough today, apparently I needed to add a 5K not-so-fun run! So annoying.

My head was in a pretty good fog today, and I can hardly recall much of the morning other than when I ran back to get the guidebook. Much of the morning was along roads and had big karri trees. It’s definitely more of an older forest feeling with such immense trees. 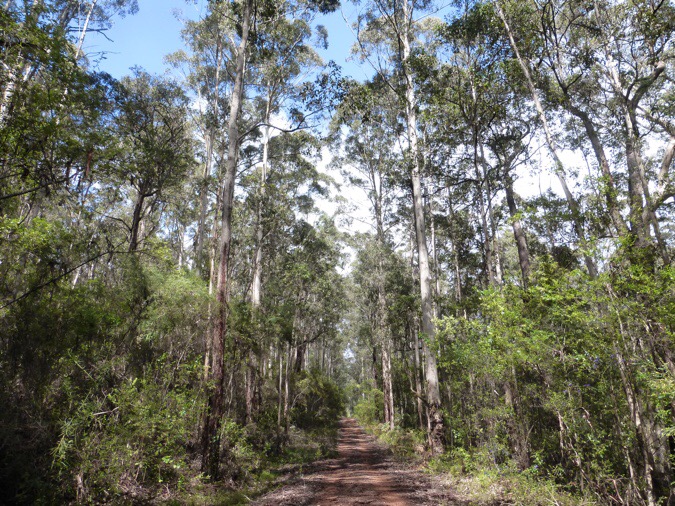 I had lunch at a great campsite spot at Tom Road Shelter. It was right next to the Donnelly River, which the trail ran along pretty much the whole day today. 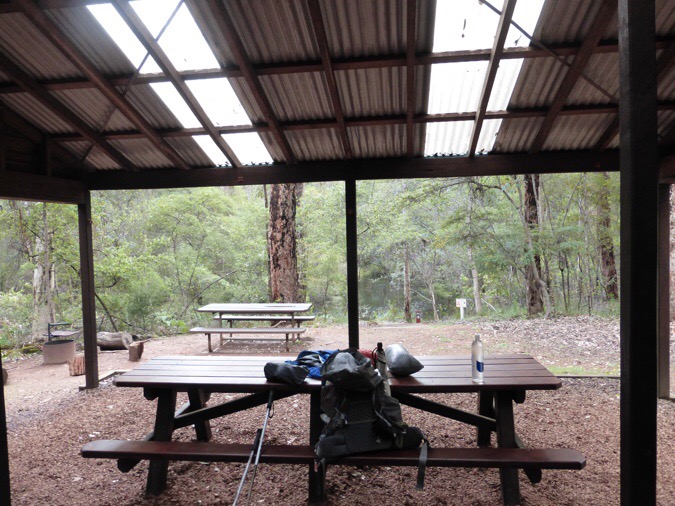 There were points where I could see the river, but for the most part, there were enough trees and brush between the trail and the river that it was not visible. 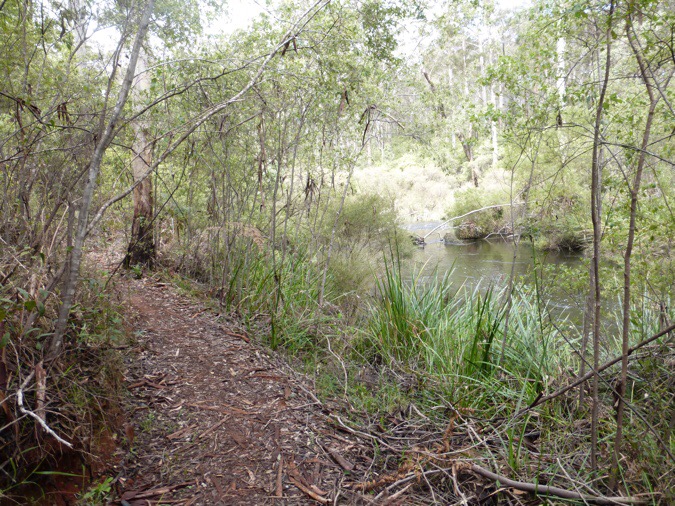 In the guidebook, it had that midway through my day today, I was hitting the halfway marker. Awhile back on social media I saw another hiker had posted a picture at the halfway sign. They commented as if there was some confusion to the placement of the sign and that it wasn’t really at the halfway mark. It was a significant enough sign that I figured I would see it wherever it was. Technically, I should’ve seen it a couple of kilometers after lunch today, but the guidebook had it 7km further south in the description. It does make sense that things change and the guidebook can’t be rewritten each year, so I figured I would keep an eye out and I’d see it when it happened. It would be somewhere between the shelter and 7km from the shelter I figured. There was a good description in the guidebook and I felt like I was looking, but once I hit a bridge I knew I might have passed it. I went back a bit to see and then figured maybe it was just a little bit further and I must have walked right by it and not noticed. That was a bummer. Then, another 7 km later, was the sign! It is odd that it is placed there because I think from everything I have that it is technically about 18 km further south than it should be. My goal is that when I meet the guy Mike that is yo-yoing the Bib on his way back north, I will convince him to pick up the pole and carry it those 18km to its proper place. Yep I’m sure he’d love that… 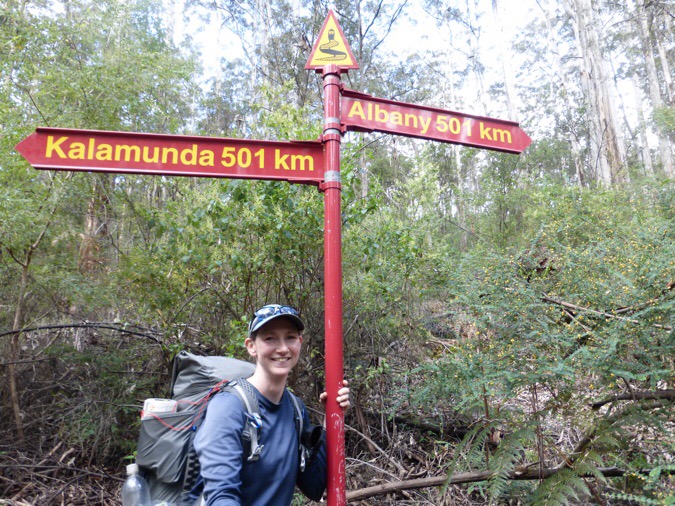 You can see on this diagram on the guidebook how close I am to the coastal section. I’m getting really excited about that and have heard it’s some of the most amazing scenery. I’ll be in Pemberton the day after tomorrow. 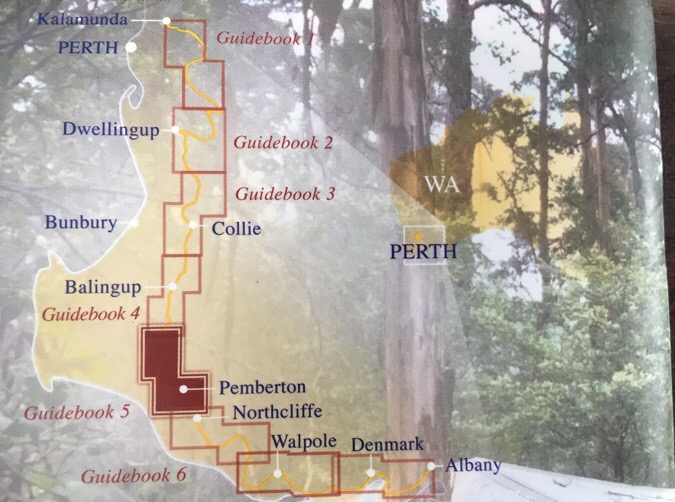 While I was at lunch, I saw that there is another hiker doing an end-to-end just ahead of me that I’d probably be sharing the shelter with tonight. A 66yr old man named Steven. By the way, I do know of people my age that are on this trail, but they are nowhere near me and all started quite a bit before me. I just happen to be running into the older hikers, who tend to single hut more than double hutting (what I tend to do). It is interesting because I can see in the logbook that there are many going hut to hut, but they are one or two huts away from one another and each solo. So, these people are just barely near one another and probably will never meet, but I am able to meet many of them. It makes me think that it would be a bummer if I set off to do a hut to hut hike and ended up overlapping with someone and seeing them all day everyday if I wasn’t friendly with them. That would be awkward for sure, and I could see one or the other double hutting or taking a day off to spread out. 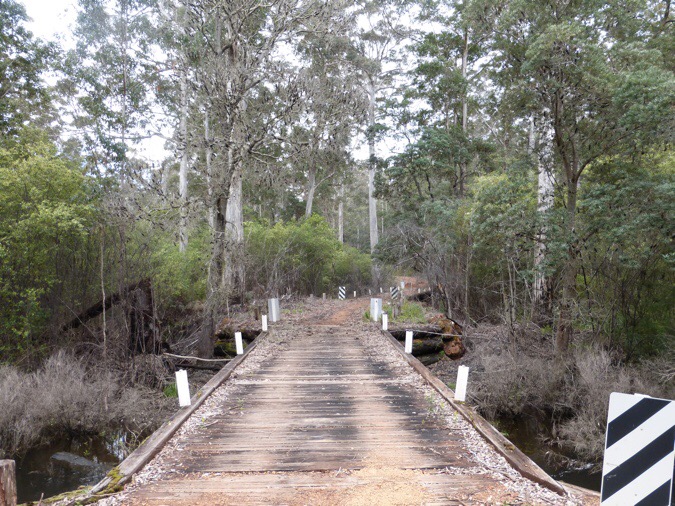 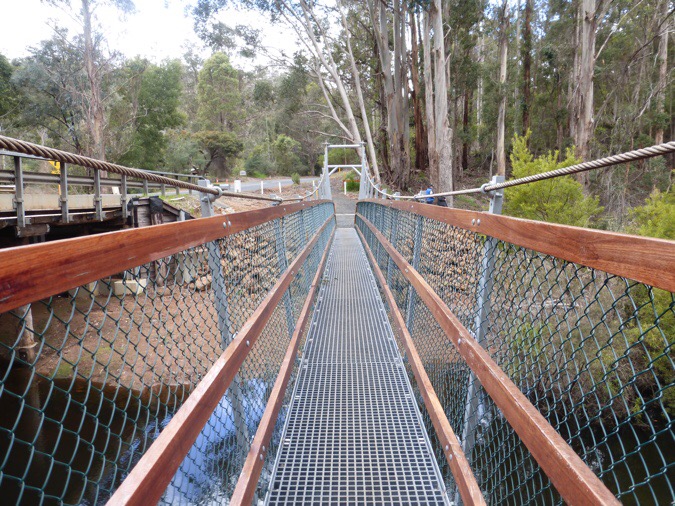 Even a suspension bridge.

After lunch, I did listen to some music and I’ve started a new audiobook. I’m not in the mood for the Ironman book I was listening to. I did a lot of that long-distance endurance training stuff when I was marathoning and it just feels like the same story I lived and heard for many years already. Just talking about training and injuries and various warm up races to the big event. I may return to it later, but for now I’ve decided to switch books. I’ve never listened or read any of the David Sedaris stuff, so I’m started “Me Talk Pretty One Day.” I started it the other day when I was walking through the farmland. It is nice just to have multiple short stories and listen to a handful at a time. 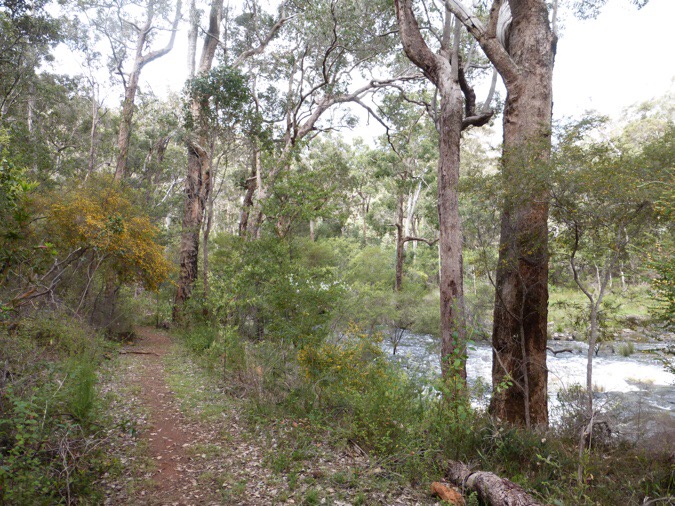 It stayed pretty cool all day and felt like fall. The clouds lingered and it freaking rained enough to put up the umbrella six times today. I thought it was going to clear up! At least it was light enough that each time it only lasted a brief bit with the longest being 10mins or so. My feet are dry so that’s all I care about. My blister seems to be just fine and healing. Claudia gave me a nice cushioned bandaid for it and I forgot to get a photo this morning, but it appears my strategy appears to be working. 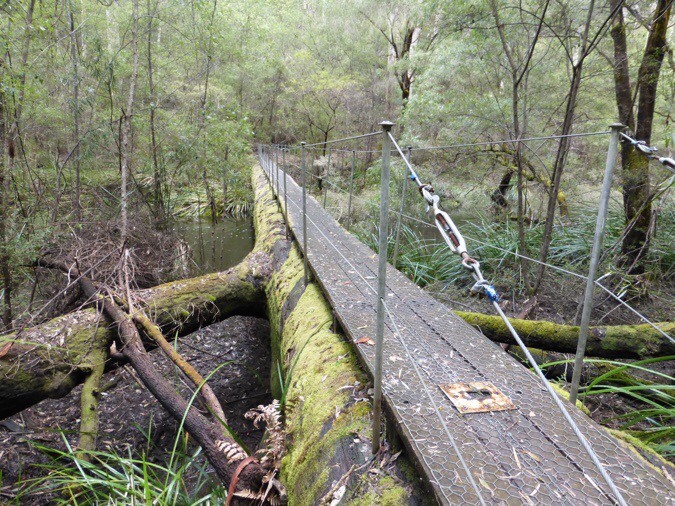 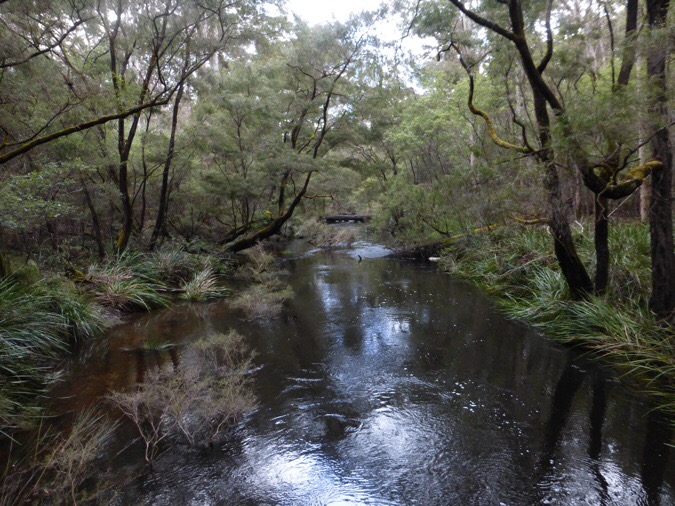 I got to the Boarding House Campsite at 5pm and met Steven who was great to chat with! He is from Perth, but originally from South Africa, so the accent was great. He’s recently retired (66yrs old) and this is his first long hike. He recently had some events in life that had him realize that he needs to LIVE the life he wants before it’s too late to enjoy it. He has it figured out and has really gotten the hang of the hike and learned a lot. It was fun to celebrate the halfway moment together. 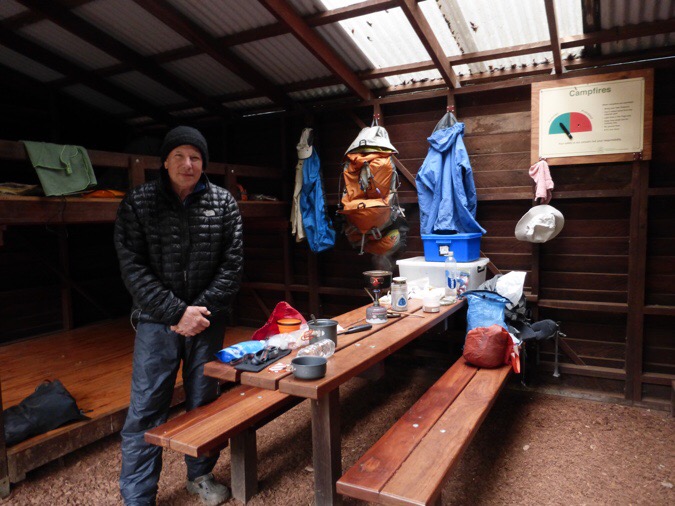