Oh man, it was a chilly one this morning. I slept really well with the white noise of the nearby stream and the warmth in my tent. There is the ease of the shelters, but there is something about the tent that is more like home for me. It’s cozier and warmer. I started hiking at 6:40am and it was only 40F/4.4C outside. The good news is that there was a nice hill to go up immediately from the campsite, so I warmed up a bit and it got me out of that pocket of cold air. Once I got to the top, I saw a beautiful and large kangaroo. I was surprised that it didn’t bounce off suddenly like they usually do. She just kept looking at me and I wondered if she was pregnant given her size. She did end up bouncing off into the brush as I got closer, but I was able to snap a profile shot of her in the woods and she had a little joey! I know I got a shot of one the other day at Donnelly River Village, but this was a really special thing to be able to witness out on the trail in a natural setting! 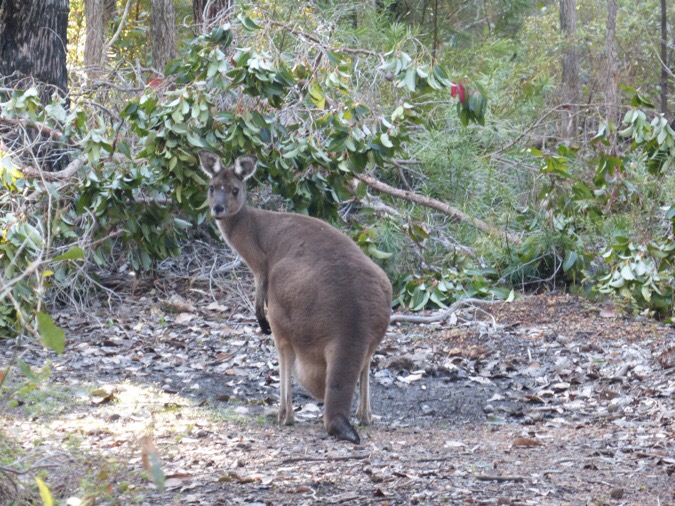 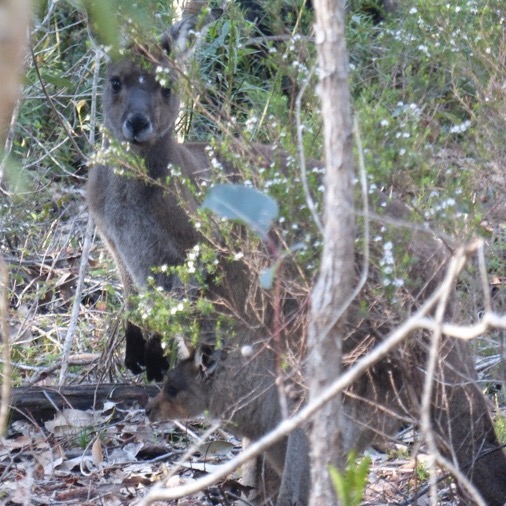 I only had a half day of hiking to do into Pemberton and I really enjoyed it. My energy is returning and I knew pretty early on this morning that I wouldn’t need to take a zero tomorrow based on my energy. I will have just over 24hrs in town and I know that will be just the rest I need before moving on. First though, I needed to hike the 15mi/25km to Pemberton. After a bit of nice spacious multitasking trail, there was a good chunk of the claustrophobic stuff. 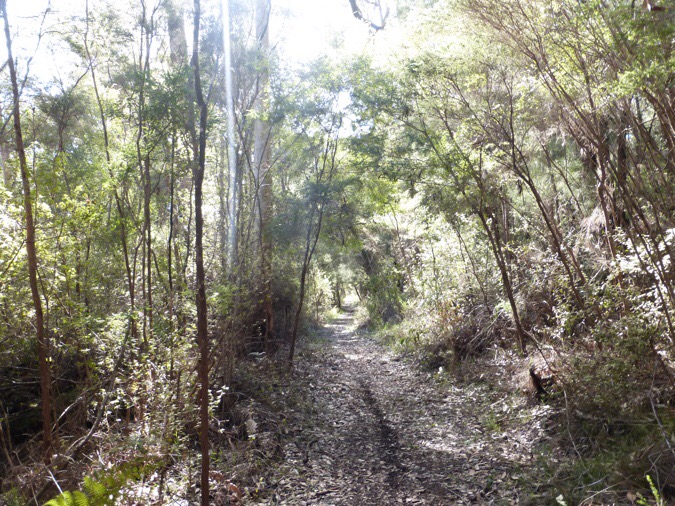 As it got closer to town, the trail went through a bit of the local arboretum. There were Sequoias there and some other trees, but they were in small clusters and seemed puny for some reason to me. Maybe it’s just comparing them to what I’ve seen on the west coast of the US. It has been nice to see the large karri trees out here though. It’s been a nice transition to something different. 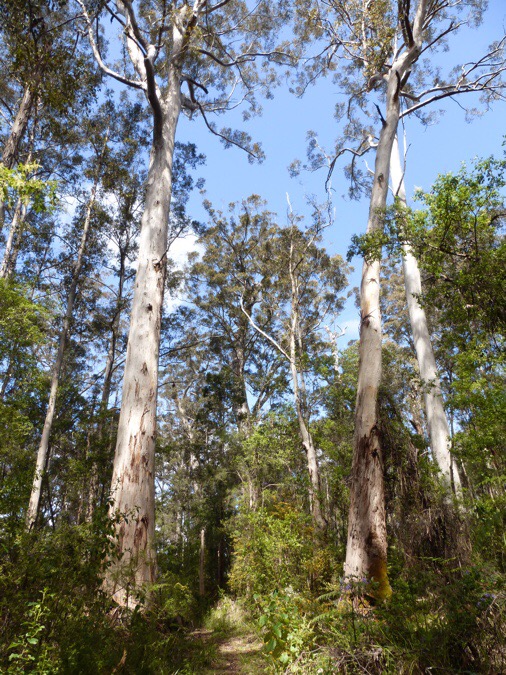 The trail also went along a dam. The view was mostly obstructed by brush, but It opened up at the end and I was able to see the whole lake there and the water running through the dam. 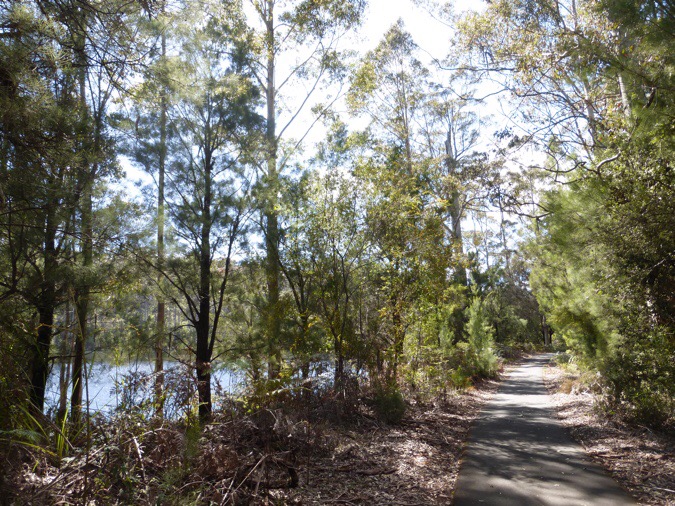 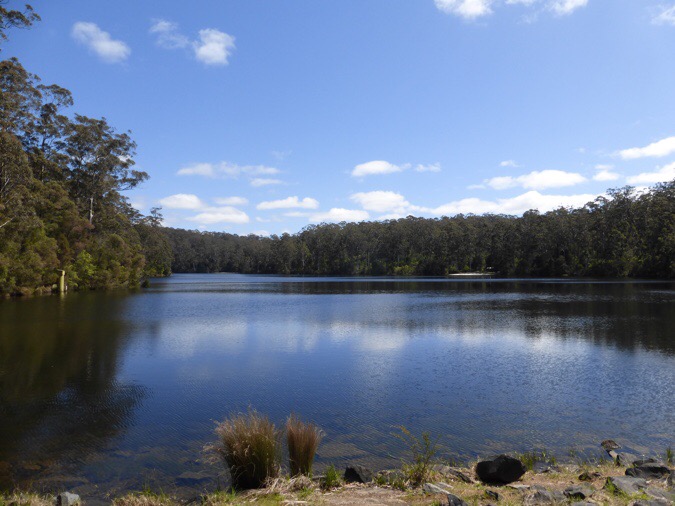 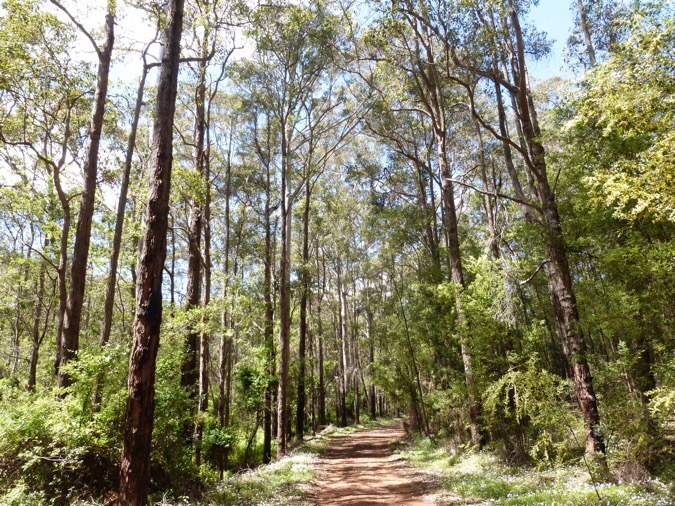 I got to Pemberton at 12:30pm and it’s basically one main street that’s less than a mile long. 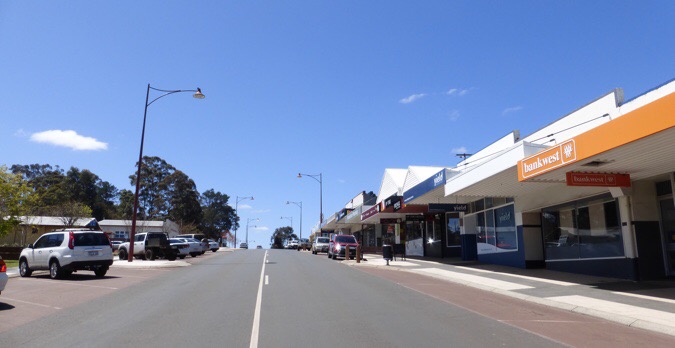 I am staying at the cheapest place, the Backpackers Hostel. As expected, the reception desk was closed while they were cleaning so I went to the other end of town and had lunch at a pub where they had good prices and MILKSHAKES! As luck would have it, a group of end-to-enders that I knew I was approaching was having lunch as well so we all ate together. This group is four Americans “The Yanks” from Rhode Island and an Australian named Kevin. The Yanks are a father and son and their girlfriends. They are all going hut to hut, so I will be staying with them tomorrow night (in my tent!) at the same campsite before I move on. 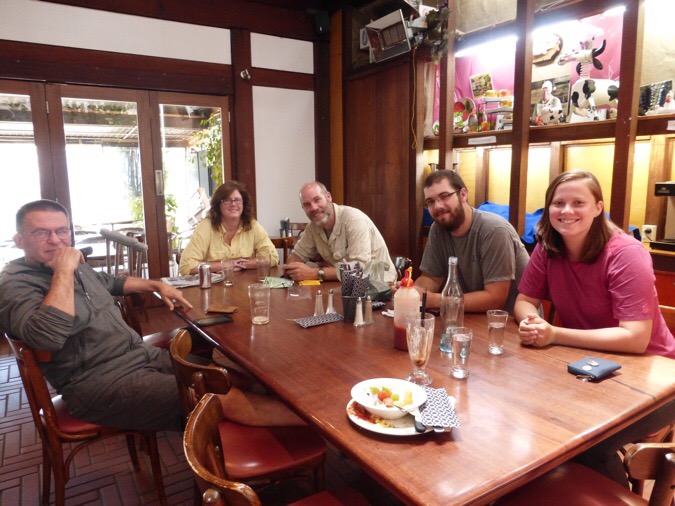 The Yanks are now down to three because one of the women got a swollen knee and is off the trail. Kevin was more sociable, but as I was warned, the Yanks were nice, but not very personable or interested in chatting much so I learned very little about them and they asked little about me. It’s understandable because they have their own group going and I think it can be easy to just stick within that when you’re in a group, but you miss out on a lot. That’s why I enjoy solo hiking so much. It opens up more personable discussions with the people you meet. I’m sure if we overlapped more, there’d be more interaction. I’m in a herd, ha! No, it’s just this one group really. I like meeting one hiker or couple at a time more than groups, and having more one-on-one discussion. 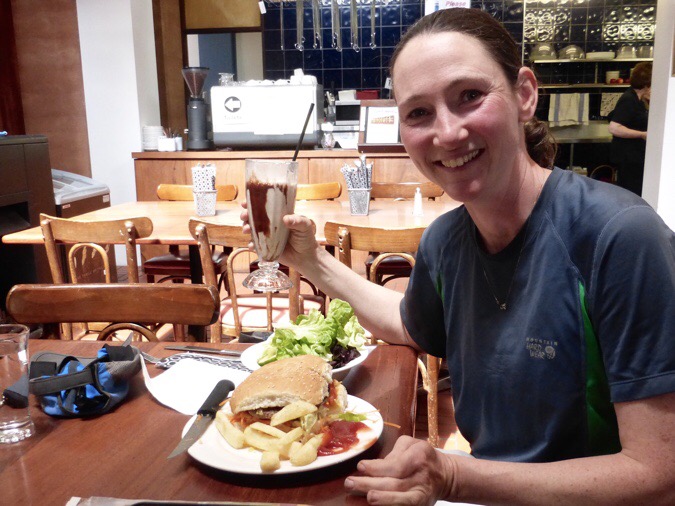 After lunch, I was able to check-in to the hostel. A warning to anyone that checks in that the hostel is NOT where the reception desk is. Once I checked in, the woman that checked me in kindly drove me up the hill where the hostel, which is a house with three bedrooms is located. One dorm room, one with two queen beds, and one solo room. I chose the solo room since I wasn’t zeroing and it’s totally worth it to have my own space! It was $40US/$50AUS vs the $26US/$33AUS it would have been in the shared room that already has at least three other people in it. All the other options for accommodation were at least $87US/$110AUS with no extra amenities like breakfast (maybe weak wifi from what I’ve heard). There isn’t even hand soap here so I’m glad I sent myself shampoo and soap in my bounce box. I didn’t even realize I didn’t have soap in the coin operated washing machine until after I pushed start. I ran across the street to the grocery store and they only sold detergent in bulk, so my clothes got a very good rinsing and not quite a wash this time around. 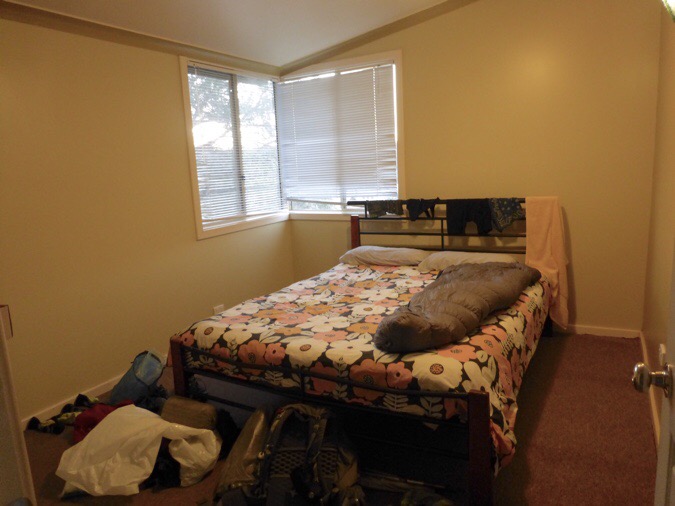 This town has the worst cell service of any town I’ve been in so far. Just basic cell on Telstra doesn’t get 4G and goes between 2 and 4 bars of 3G. This hostel is very minimal and doesn’t have wifi, but I notice most places in town don’t, and if they do, they charge. Knowing I had scheduled a zero here, I sent my laptop here, as I do sometimes to get a bulk of things done every few weeks. I thought I’d have a lot less service on this trail, so I’ve actually kept up amazingly well and don’t have as much to do as I anticipated. Since the hostel doesn’t have wifi, I was able to go the visitors center and use the free wifi there that is actually quite fast! I got a ton done and only had till 4:30pm when they would be closing and turning off the wifi. Well, fortunately, the woman in charge must have felt for me, because she said she’d leave the wifi on for me (which they don’t normally do) and I could sit outside at the table to do more work. I got to stay an extra hour and will go back before they open in the morning to wrap up some things. It is a brief time with my laptop, but I’ve been super efficient and it was totally worth doing. Just being able to type this post on a computer is a huge time saver!
As for food, there is an IGA supermarket that’s a good size across the street from the hostel. I have a resupply box just three days from here, and I sent myself extra food in the last box at Donnelly River Village, so I don’t have to buy much. I’ve found that meals at cafes or supermarkets tend to be a lot cheaper, easier, and more filling than the restaurants, so I got some good lasagna and pasta for lunch and dinner with a nice big chocolate milk. The key for me is to walk as little as needed while in town. To make this 24hrs complete, I’m happy to say I am ending this evening with this week’s episodes of Greys Anatomy, Modern Family, and Survivor. Yep, living the life! Looking forward to sleeping in tomorrow and going out on a relaxed half day.