Day 19: Capitalizing On A Great Day

I woke up this morning to the sound of the forest full of birds. It was like spring finally arrived. It felt like a completely different forest with more birds singing all day. I left camp at 6:15am while the others were getting up and having breakfast. I like that campsite because it was high enough and had a thin enough forest that we could see the sunrise. I haven’t gotten one of those in awhile. 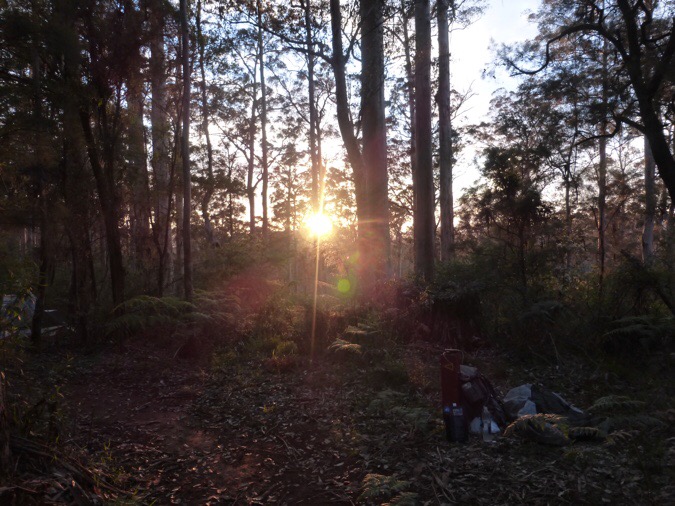 My mind was completely occupied for the first 5.5 hours of the day with just walking and enjoying the sounds and sights. I’ve been most amazed by this with me. I came on this trail with a full library of music, audiobooks, and podcasts, but I’m pleasantly surprised at how much less I’ve been wanting to listen to things on my headphones, and how quickly time has been passing out here without them. About halfway through the morning, I met another hiker coming the other direction. His name was Leo and he was great! 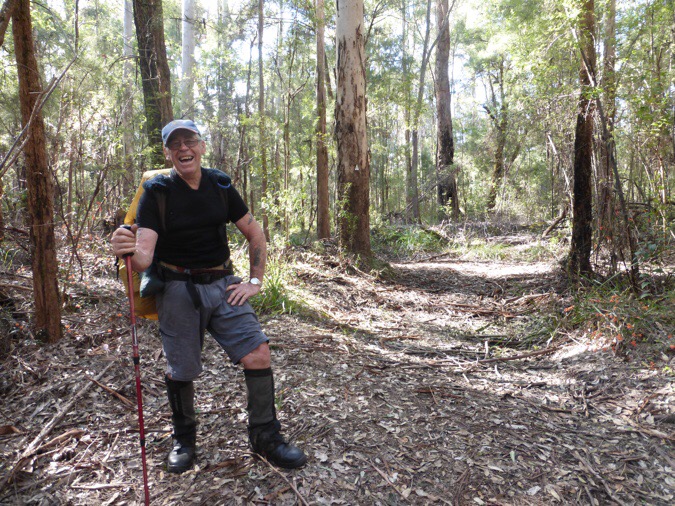 I told him I’ve yet to see someone actually hiking on the trail that’s doing a long section. I’ve seen a couple of people that were doing an overnight or day hike, but I was starting to believe that the ones that were doing long distance were somehow teleporting to town and shelters because I have yet to come across someone actually hiking that’s doing a long hike. It was quite a moment for me. He was entertained by that and gave me a ton of information on the remaining week and a half or so I have left. There are some obstacles ahead that I was wondering about and no one had come by to ask that had gone through those sections, so it was great to get some beta on the conditions ahead. Leo is a regular of the Bib. He said he’s done three end-to-end hikes and another three at least completed in sections. He likes to come out in both spring and fall and walk wherever he has the time to go. This time. he is doing about two-thirds of the trail and started at Albany. He is 67 years old and has been doing this for the past nine years. It was great to meet him and he had a really fun energy.

I’ve been having lunches at shelters because of the weather in the mud, but today I arrived at a shelter earlier than lunch normally would be, and I realized that I didn’t have to stop and take an early lunch. I walked another hour and then had lunch at a nice shaded spot in the trail. The mosquitoes are out and I got a few bites, but I seem to have a better tolerance of them than in the US. Unless they are just not as bad here, because they bite and then I don’t get much of an itch or a bump. They aren’t terrible yet, and I really only notice them when I sit still for an extended period of time, like at camp last night and today at lunch. If I cover up my legs and arms, it’s not a problem when I’m sitting still. I’ve yet to have anything bother me while walking, so that is good. 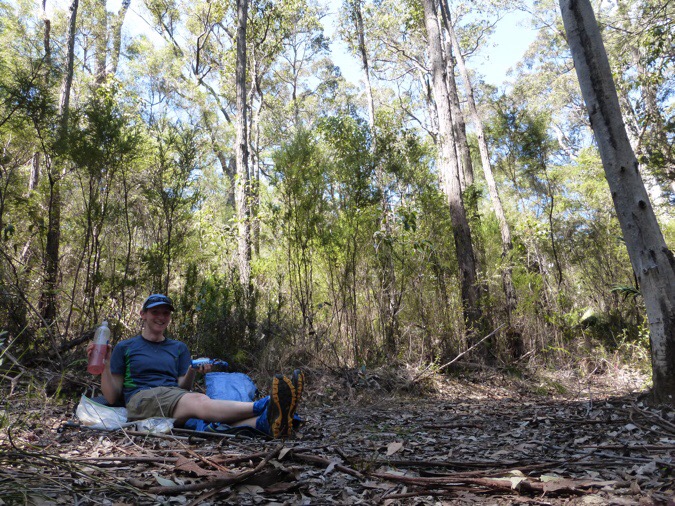 I now have my ticket booked to New Zealand, so that puts me on a bit of a timeframe. I like to buffer just in case things happen. I need to do a little bit bigger days these next four days so that I can really relax on the coast when I hit the beach for the final week next week. I like to have wiggle room in case something happens as far as weather or logistics. I still have the Cape to Cape to walk for about five days after the Bib and then I will head back to Perth to fly out to Auckland via Sydney. If I have enough time, I will take a day in Perth to go over to Rottnest Island. I think I have planned it perfectly to fit in the days I have, and still have some buffer, so it doesn’t feel pushed. If I end up needing to save a day I won’t do Rottnest Island. It’s a touristy thing that is pricey, but sounds cool just off the coast of Perth. It is an island you can spend the day riding a bike around because there are no cars allowed there. I will have been hiking on the coast for about two weeks at that point, so it’ll be interesting to see if I’m still interested in doing it by the time I finish the Bib and The Cape to Cape. 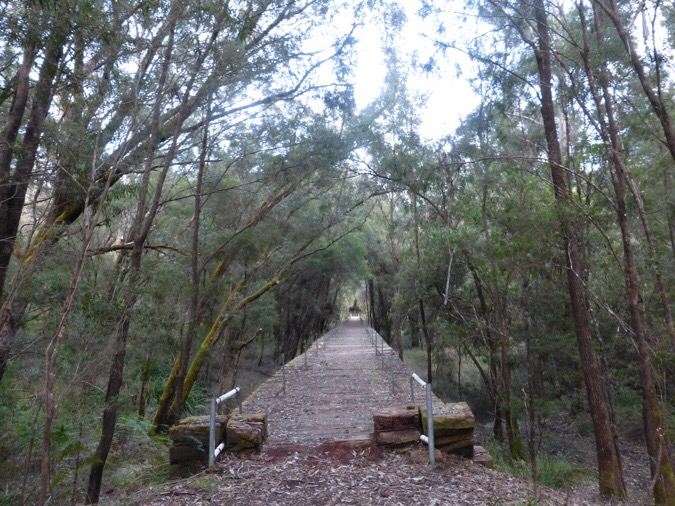 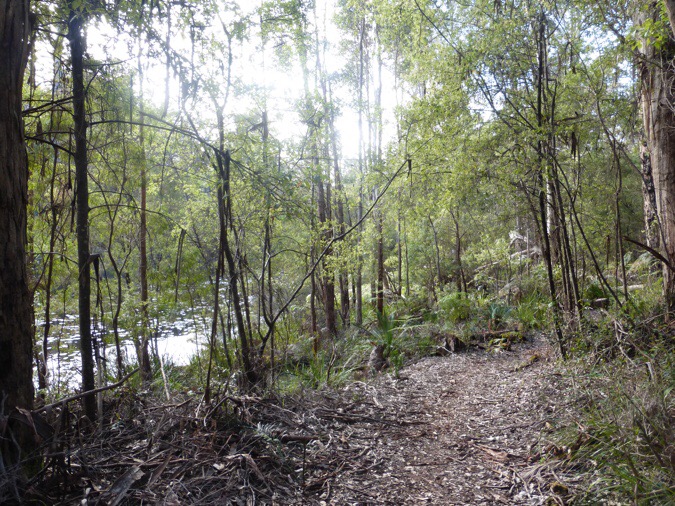 Animal sightings today included a mob of kangaroos, and emu, a ton of birds, and a tiger snake (slithered across the road). This one bird I had never seen before was the most colorful bird I’ve ever seen. I tried to get a photo before it flew away but the camera would not focus on it. I’m still posting it because it was such a cool bird and you can kind of see what it looked like. 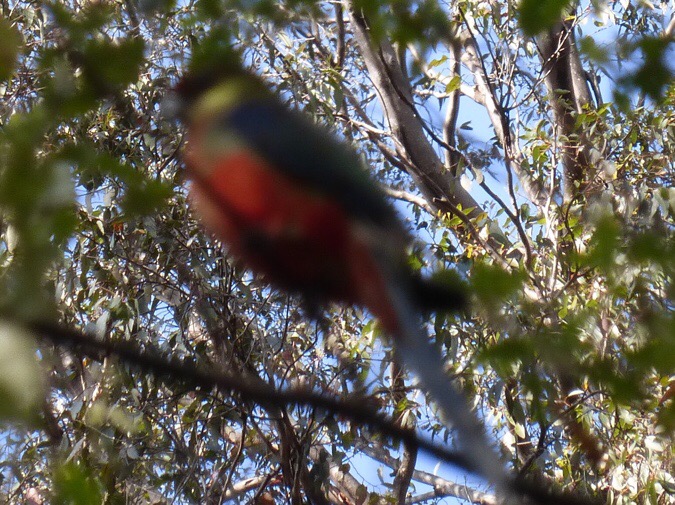 This afternoon I walked through the town of Northcliffe (forgot to take a photo). It is basically an intersection and most businesses are closed, but there is a place to eat and Post Office. I had a box at the PO that will get me through the next three days to Walpole and dinners for even further. I am glad I sent there so that I didn’t have to buy in Pemberton where the selection was not as strong as I would have liked if I needed a full resupply.

When I walked into Northcliffe, I immediately saw three other hikers. They were with a fourth who hiked onto the next shelter, but they were going to catch a bus to a town further south to skip a section here if that has some standing water that isn’t fun to go through. They are locals and will return when the standing water has dried out. They call themselves WWW (Wandering Wagyl Watchers) and were a fun group. 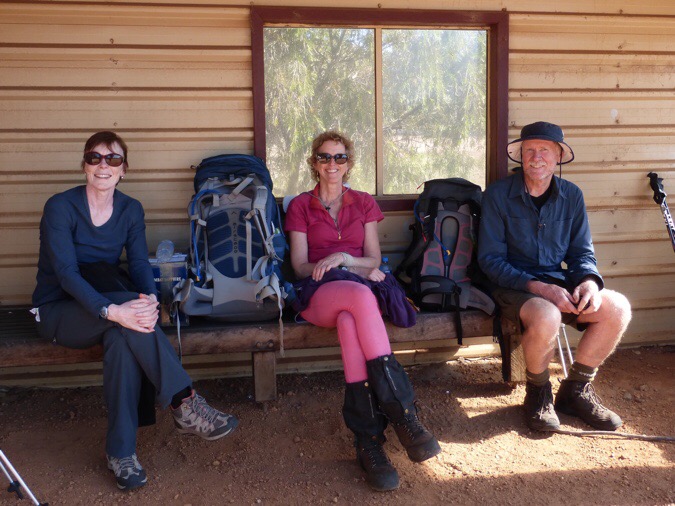 I’ve met quite a few people in towns doing similar things along the Bib. There is a bus system that goes to many of the towns along the trail, and it apparently makes it convenient for choosing sections rather than having to hike a large chunk straight through. I was going to get my box, and they mentioned something about going to the next shelter. I said I wasn’t going to make it that far, but then I saw what time it was. I wasn’t even paying attention to the time today figuring the timing wouldn’t work to land at a shelter. I realized I was totally within the range to make it to the next shelter tonight, but that would mean that I would’ve done a 32mi/52km day. While I went to the post office and organized my resupply box, I thought about my options and if I wanted to go that far today. I have this theory about hiking, well about everything in life, that I should do things while I can and while it feels good to do them. The weather was great today, and isn’t the next couple of days, so I figured I should capitalize on that. I looked up the weather and it showed that it was going to have a 70% chance of raining overnight, so it would be nice to be in a shelter. It’s fun to have a little challenging sometimes. I don’t need to hike this much every day, but sometimes it’s fun to do a full day like this when it is nice out. 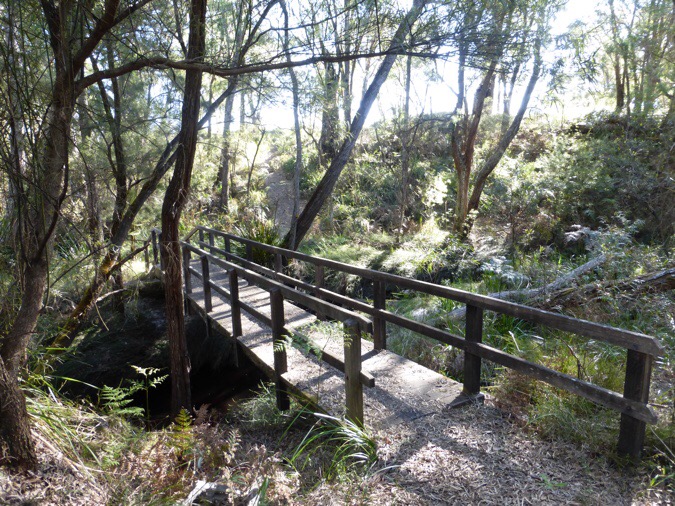 The remainder of this trail, the shelters are more varied in their distances apart from one another and I may not be landing at a shelter at the end of the day like last section when it worked perfectly for 40km days. I am good with that as long as it doesn’t have terrible rain. It seems that there is some rain in the forecast, but it seems to be the type that will hopefully come and go and not accumulate a ton. So hopefully, it won’t be drenching. I’ve been enjoying the time in my tent. I’ve missed it! It wasn’t until partway through the hike tonight that I remembered that the next two shelters don’t have roofs, and are being rebuilt due to a fire. They are soon being built and I’d heard it may be this week, so I still had hope that maybe the new roofs just got put on.

The hike out was on some sandy trail that was so fine it was like ash. It was nice because it was soft, but it was more tiring because I couldn’t get a firm stance on it in the deeper parts. There were many little puddles to go around and side creeks to cross either stepping over, on a bridge, or on a plank. 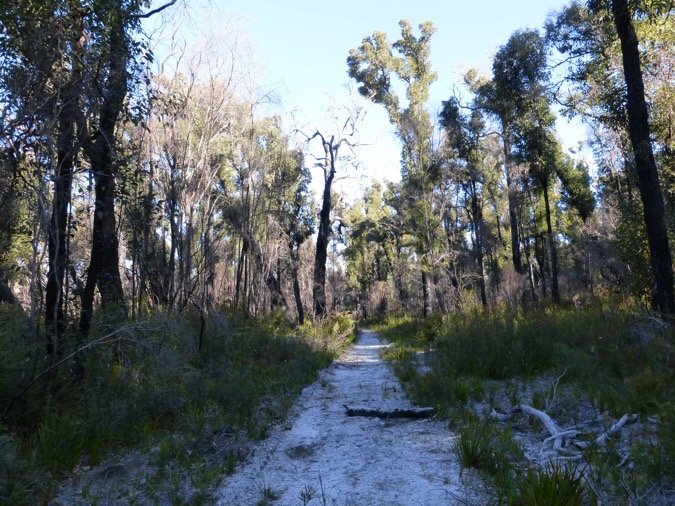 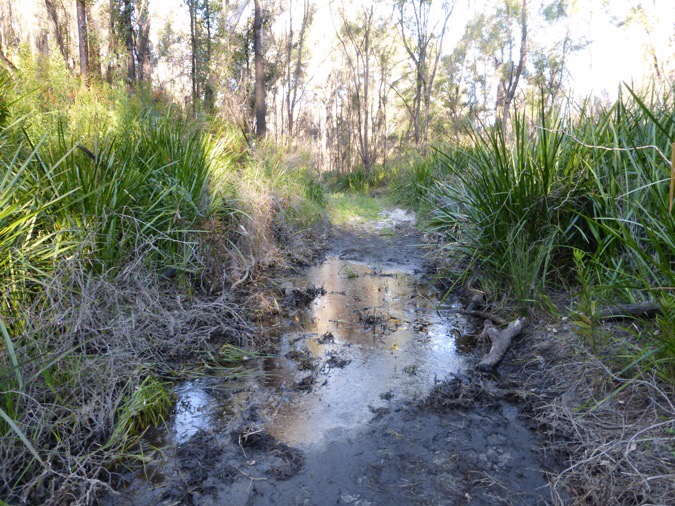 It was quite brushy and sandy with few nice spots to tent, so I’m glad I went on to the site. Unfortunately, there wasn’t a roof, so I had to pitch the tent. There was a young Swiss couple sleeping on the floor of the new spacious toilet building that had a roof, but wasn’t in use yet.  There was also a 21yr old Frenchman that was in the camping area by me. He had been with the WWW group and the Yanks, and his name is Baptiste. We visited a bit after dark at a fire he made and he was really sweet. I missed my photo opportunity before it got dark. 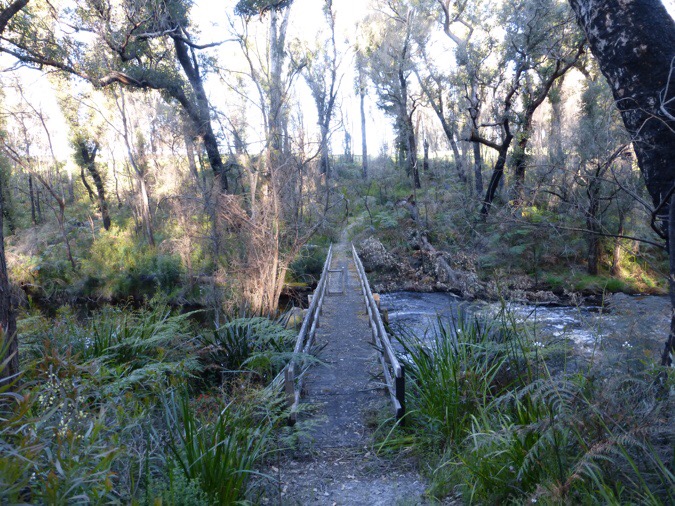 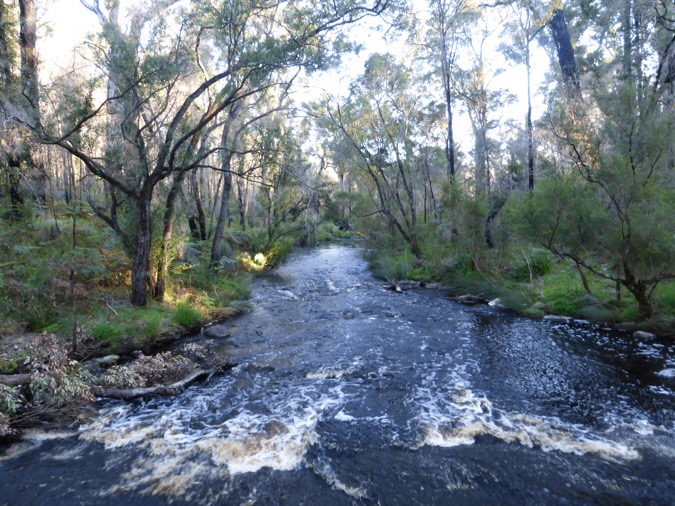 This whole section is along the Gardner River.

Welp, I can say it feels good to have done the miles today. It’s odd, but I don’t feel like I did more than usual. I’m sure I’ll feel it tomorrow. There are absolutely no clouds in the sky right now, but there is a 70% chance of rain overnight. We’ll see what happens. The weather is so random out here and moves in out of nowhere. There is rain and wind forested for tomorrow. Not a great combo. I have a feeling I will sleep very well tonight. 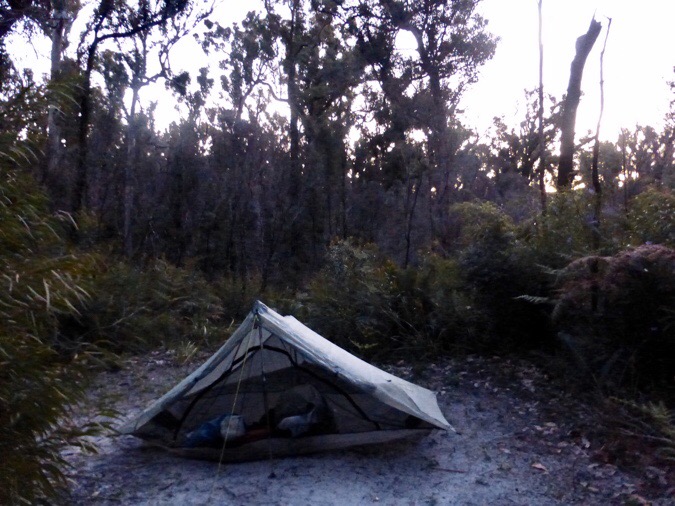