The wind picked up overnight and it drizzled a few times. As I was packing up this morning, it rained for a good 10mins. Just enough to get the tent wet and all the brush that hangs over the trail. I dug out the rain pants guessing I’d get pretty wet from the brush. I got started at 6:40am and within a minute everything was wet from the brush including my shoes and socks. Good thing I wore the rain pants. I also came to the first logbook of the track and saw two people started yesterday, but there aren’t too many out here going northbound. The guidebook is written southbound, but people go both ways. Northbound worked best for me since I was already down south and need to hike north to get back towards Perth. 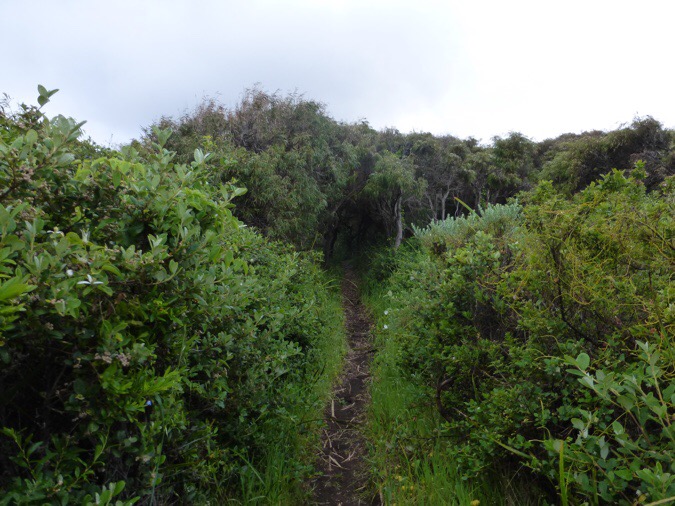 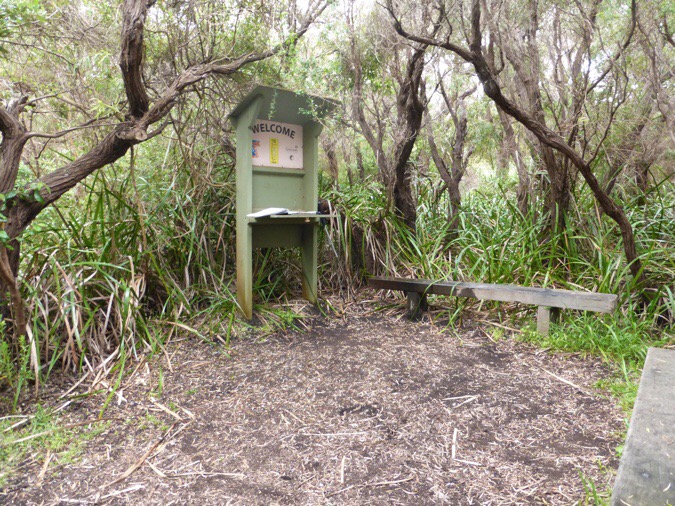 My stomach was in recovery mode not really wanting food but tolerating what I made it take. I was feeling depleted from yesterday, but rebounded more as the day went on. The trail opened up within 15mins and dropped toward the beach after an hour or so of sand dune type trail. The rain came lightly every so often for brief bits. I loved the clouds today. Clouds are one of my favorite parts of hiking, so I love it when I get days like these and can be in the open to see them all day as they morph and get lighter and darker. I could see rain cells far off in the ocean.  Some would hit the shore and others would dissipate. There were small rainbows in the distance at times. 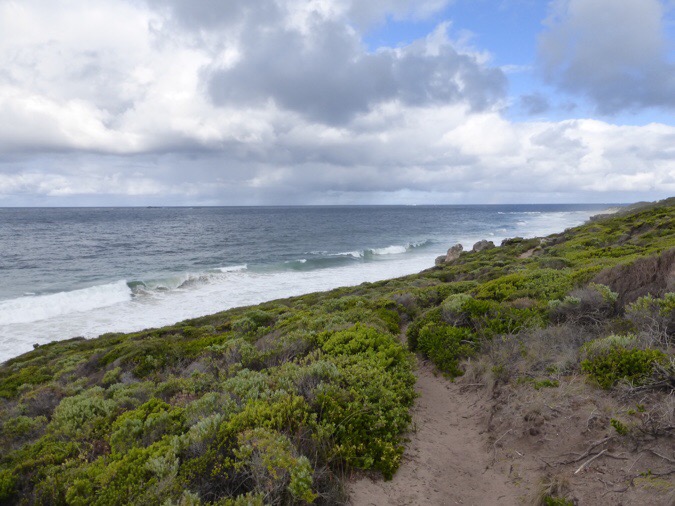 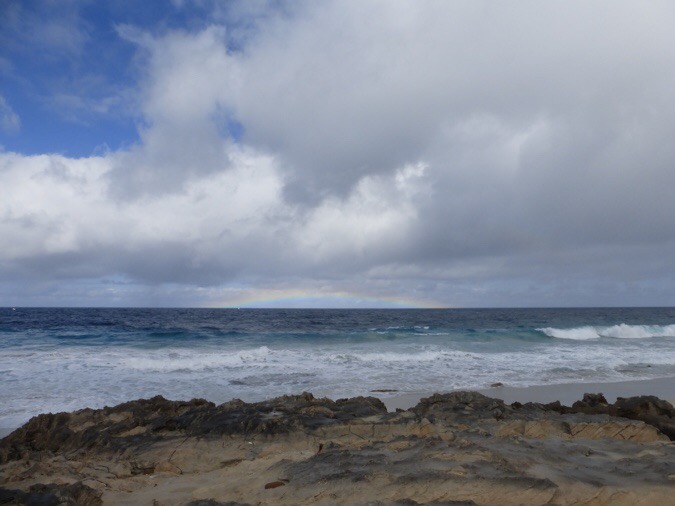 It’s tough for me to gauge how difficult this hiking would be. Everyone warned me that overall, the Cape To Cape is much more taxing than the Bibbulmun and to expect shorter days. Since I had to book my plane ticket to fly to Auckland a couple weeks ago, I decided to err on the side of caution and give myself a goal of ~20mi/33km per day. I had heard that today would be the slowest of all the days and I was thankful to get it done early in the trip and have it behind me. The main obstacle of the day was the 7km Deepene Beach walk. The guidebook says that it is so difficult that there are plans to cut a trail in the brush above the beach once funds are raised. With all this talk about it in the guidebook and from others that have hiked it, I prepared myself for the worst. 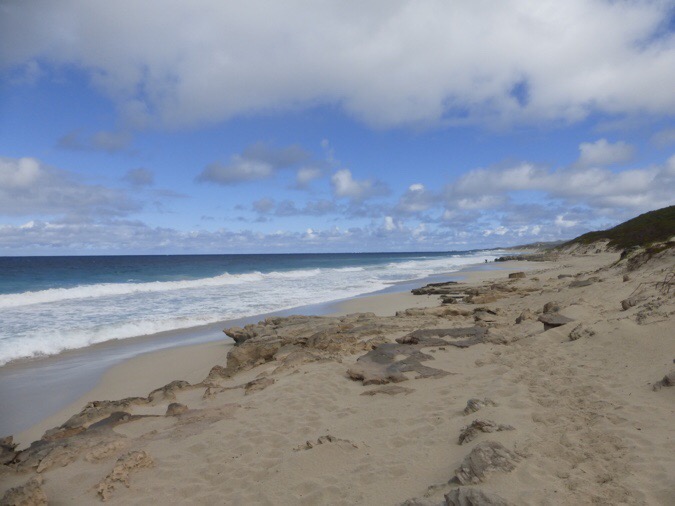 It was mostly deep sand walking for over 2hrs. With the cloudy skies and cool temps with consistent wind, it was less tiring than I thought it would be. I think it helped that I’d built it up in my head to be so arduous. I shifted into a lower gear and kept a steady pace accepting that it would just be slower. After awhile, it got pretty monotonous when I could see well ahead to my final destination, so I put on some music. Mid morning, I did see a young group of five that were on their last day of the C2C. It was helpful that they had hiked most of the beach that morning so I had some more compacted sand to walk on if I used their footprints and the jeep tracks. Yes, jeep tracks are quite common on the beaches. 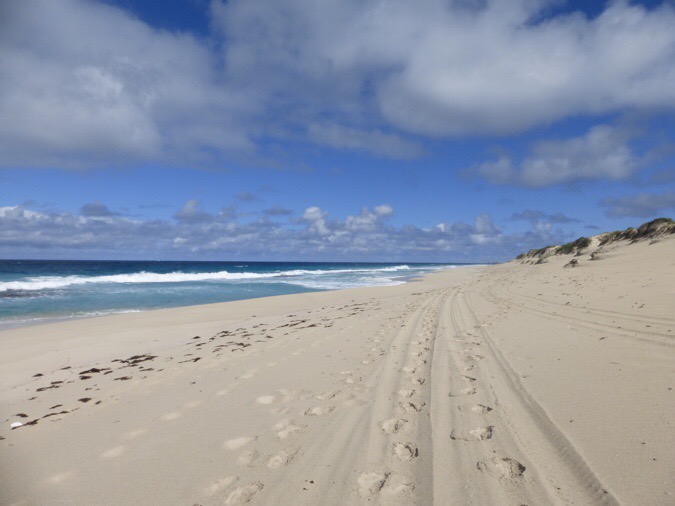 I think it was more of a mental boost. I’m not sure it really made much of a difference in such deep sand. The temps were so cool that I had plenty of water and was able to skip the kilometer round trip I would have had to make to get water. After the sand slog part, there was a cool rock shelf to walk next to that also had a unique section where the shelf was split apart with very deep cracks and the ocean waves coming in far below. 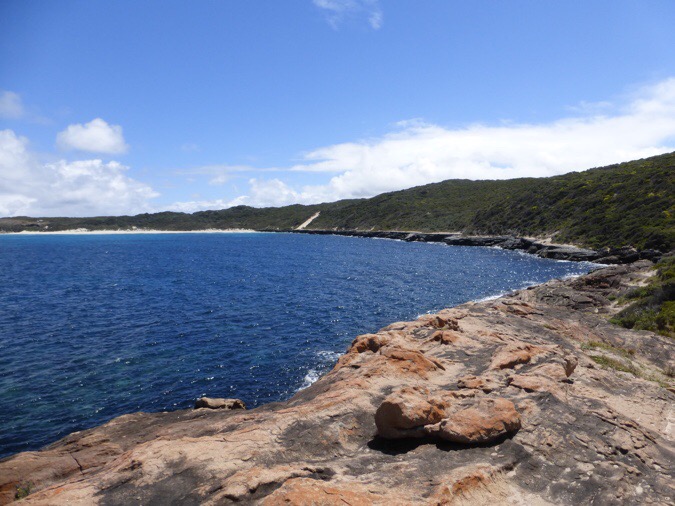 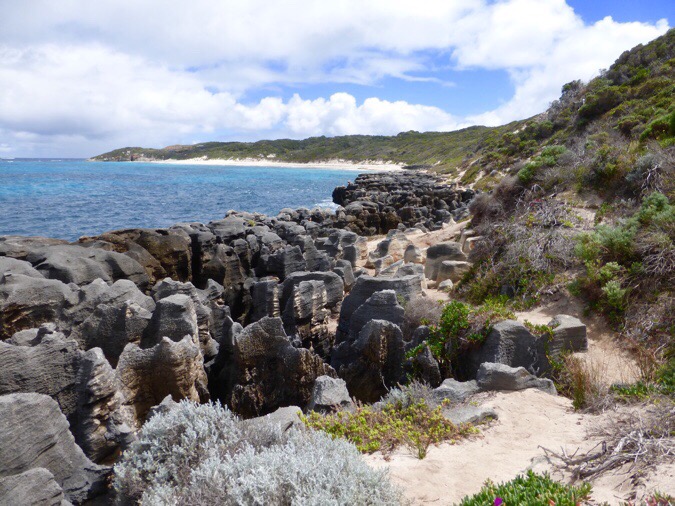 After leaving the beach, the track went up a while and went by a small lighthouse. It was about time for lunch, and I got service to post the blog for the first time today, so I stopped. There was some concrete, so I was glad I was able to get out of the sand and lay the tent out to dry. It had been misting on and off every so often and I could see the dark clouds heading my way, so I ate quick not sure when it might rain again. 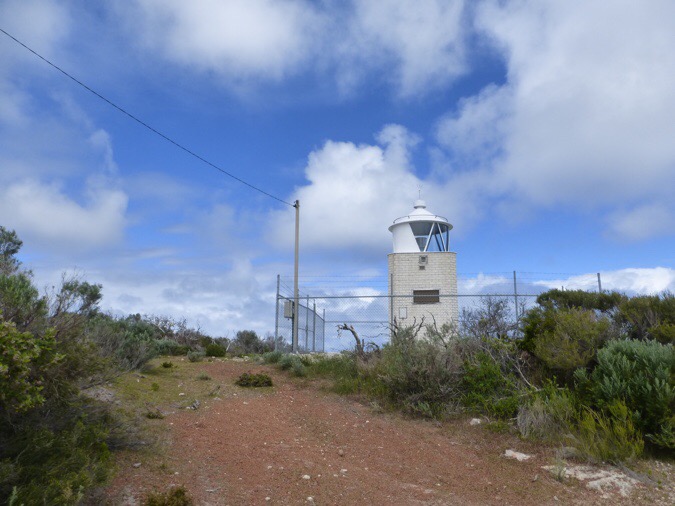 Next up, was Hamelin Beach and more sand walking for a couple hours. People were out and about at the viewpoints where cars could easily drive and there was a caravan park along the beach where most stop to camp since it’s another 14mi/22km to the next water source. I chose to carry enough for the rest of the day, cooking tonight, and tomorrow morning, and hiked on to finish the beach walk. Hamelin Beach was a bit more packed allowing for a slight better pace. The clouds were awesome, the color of the water was stunning, and I loved it! 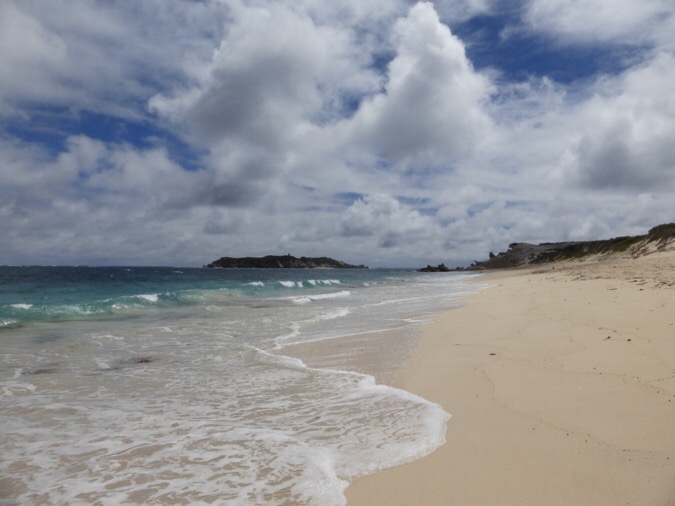 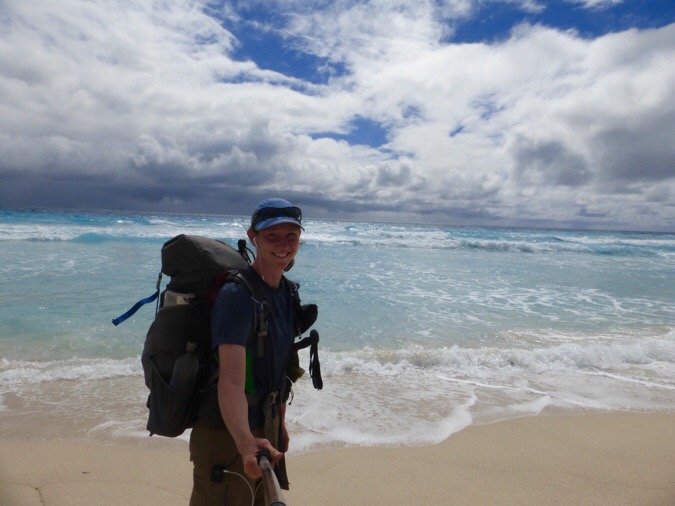 Two guys hiking half the C2C came from the opposite direction and confirmed for me that there were little spots to camp just like I’d found last night in the brush. In particular, they mentioned one that caught their eye that was perfect for where I hoped to end the day, so I was happy to have a confirmed spot to head to. Right towards the end of the beach walk, the wind picked up and it rained horizontal rain for 10mins. I knew it wouldn’t last long, so I didn’t put on the rain pants and was able to put the umbrella directly on my side to keep my upper half completely dry. My pants dried quickly after it stopped. 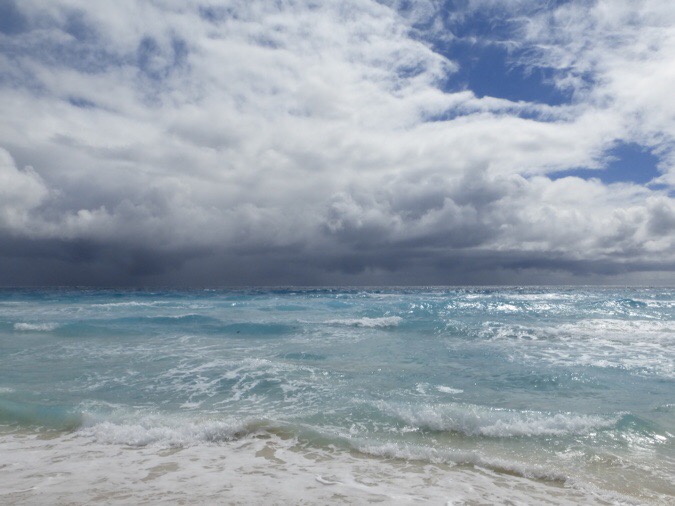 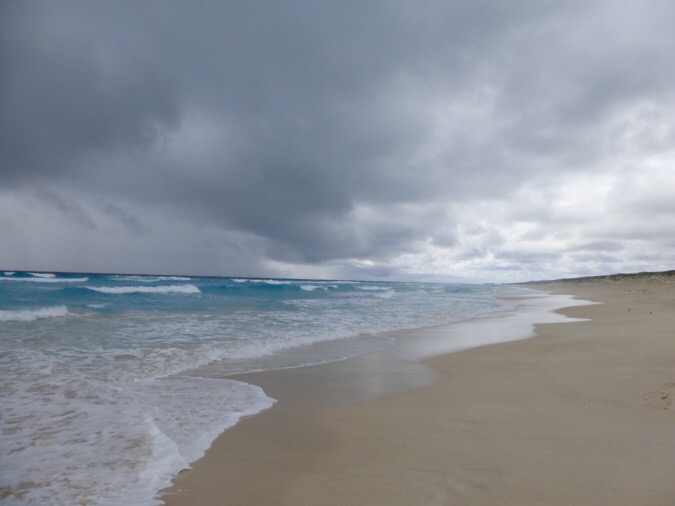 I hiked up off the beach about 15mins or so and found the spot the guys had mentioned. It was a dream spot for me! I love these little hidden homes under the brush that many could just walk right past if they weren’t looking for them. This one was a mansion. It reminds me of a bush that was near my elementary school growing up that my sister and I would go in and it was like a secret home with a ton of space no one would have imagined. This was my adult version of that bush and one of my all time favorite spots. There isn’t a view, but it feels like a cozy home and I can hear the ocean. As I type this in the dark, there seems to be a kangaroo thumping around, so I’m thinking I may have crashed his secret hiding space. 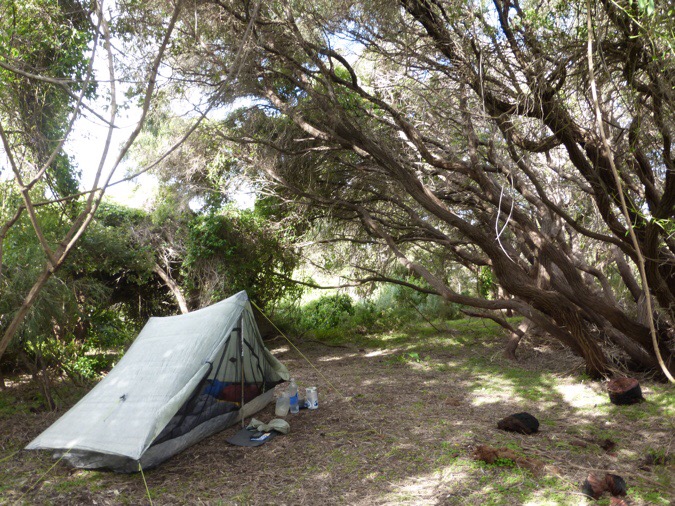 It was just after 3:30pm when I arrived and I was surprised it wasn’t later. Since I’d hit my miles for the day, I decided to stay and enjoy the relaxed evening. If I moved on, it would just push me ahead of the schedule, and I already purchased a bus ticket to get back up to Perth, so finishing earlier won’t accomplish anything. I’m really happy that I’m going to have four days like this that are really relaxing and I’m loving the extra camp time. I swear, I’m getting spoiled out here and on the Bib with these shorter days. I may be ruined for future hiking…I got to watch two episodes of Bloodline tonight. Living the life!