October 14th
Gardner Campsite(413.7)-1mi N of Pingerup Rd(439.7)
Mileage: 25.5mi/41km
Campsite Elevation: 177ft/54m
There was a steady rain overnight for about an hour around 12:30am. Then there was light rain this morning as I was getting ready, but it cleared and I had mostly blue skies early this morning thankfully. I knew it wouldn’t last long, but was happy to start off with dry weather at 6:40am. The fine sand is everywhere and with it being wet it has stuck to everything. 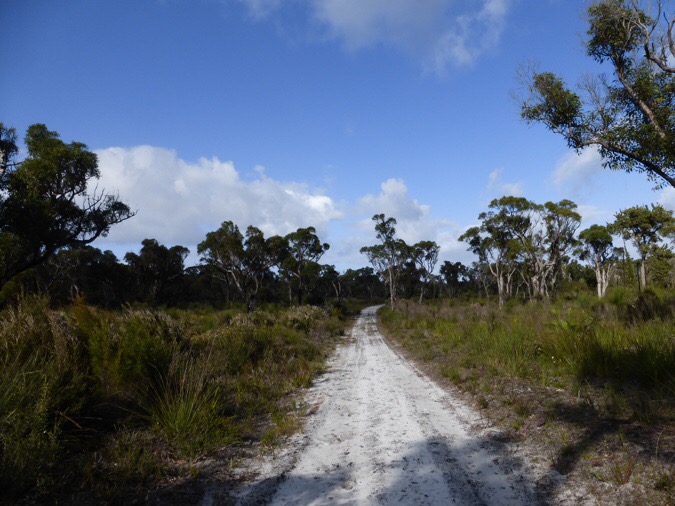 This morning was more walking on the sandy road. Being wet, it was more compact and easier to walk on. I saw two kangaroos and one of them was huge. He bounced off just before I could get the photo, but he had to be over 7ft tall. The other one was really cool because it was in the grass along the track and when it bounded away I could watch it bounce over the grass and it was like watching a nature channel video. 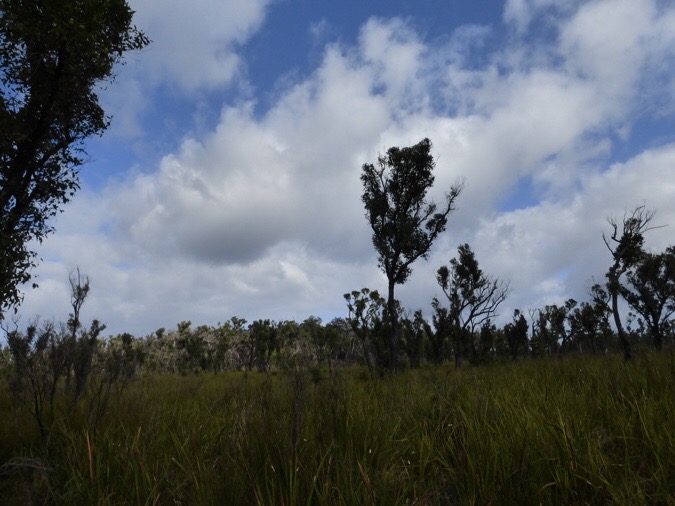 Imagine a kangaroo bounding over that grass. 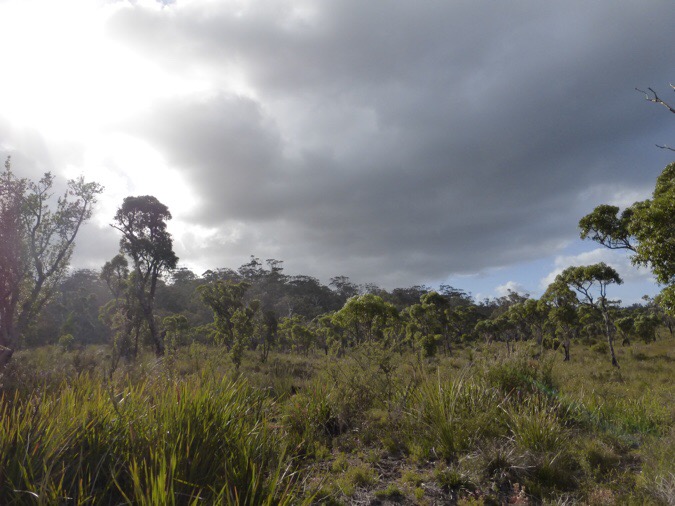 Today is the only diversion (alternate) I will be taking on this trail I think. It is there because there is an area that is flooded out and they have provided a reroute until it clears. This whole section is near the Gardner River and pretty flat and prone to flooding early season. This season is abnormally wet for this time of year, so it is usually clear by now. This particular spot has a large lake that is also flooded. The alternate walked a gravely road for 7km and cut off 10km from what I would’ve walked on the official route. Overall, I missed 17km of the actual Bib. My only comment on these reroutes is that there is only signage at the camps before and after them. When you reach the actual point that you should be coming off the Bib, there isn’t any flagging or signage to indicate it, so you just have to know for yourself and have taken the information that was at the campsite. I’ve never been on a trail where there isn’t a clear sign to indicate an alternate and something blocking the closed section. Signage wasn’t there for the Murray River one as well. That’s how I ended up walking right past it. I did notice some temporary Wagyles along the alt. Then, at the end of the alt, there was a ton of flagging and signage for people coming northbound. Well, at least it was clearly signed on one end. 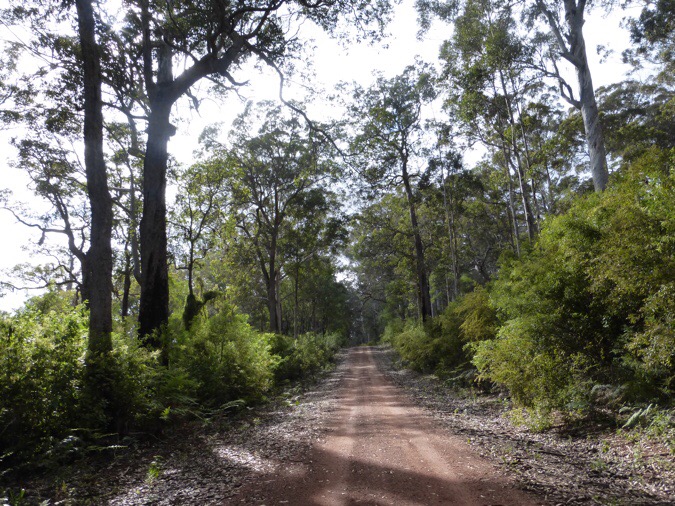 The rain kicked in around 9am and lasted for a couple hours while temperatures dropped to about 60F/15.5C. As long as I was moving I was fine, but definitely had a chill if I stopped. The winds had picked up, so the rain was coming at an angle at times, but not horribly bad. 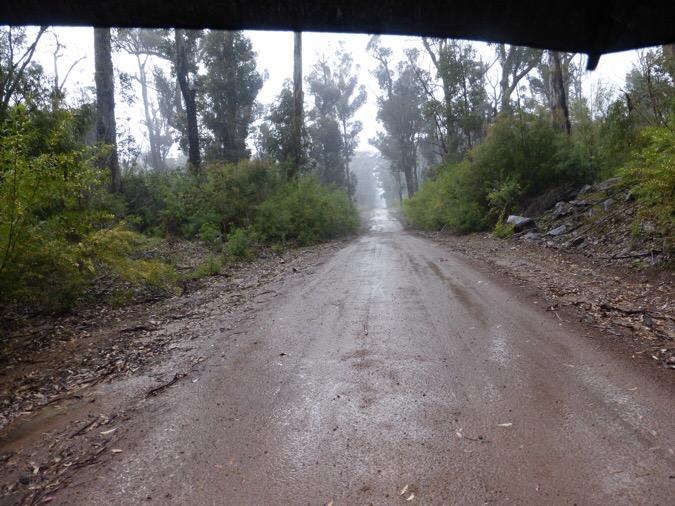 After about an hour and a half of the diversion, I reached the point where the road connected back to the trail. I turned onto the trail and immediately hit three consecutive large puddles that needed to be navigated around. It was raining and all of the brush was quite wet, so I was getting more wet trying to stay dry. After the third consecutive puddle I realize that this was not something I wanted to do for the next 2-3hrs. The nice clear road I had been on was paralleling that mess for the next 6mi. I didn’t have to be doing it. I’m quite the purist when it comes to staying on trails, but this situation was a no brainer. I turned around and went back to that beautiful road I was walking on and did that for the next 2-3hrs. I was pretty proud of my decision as the rain returned in spurts and I was able to stay relatively dry and mud free. 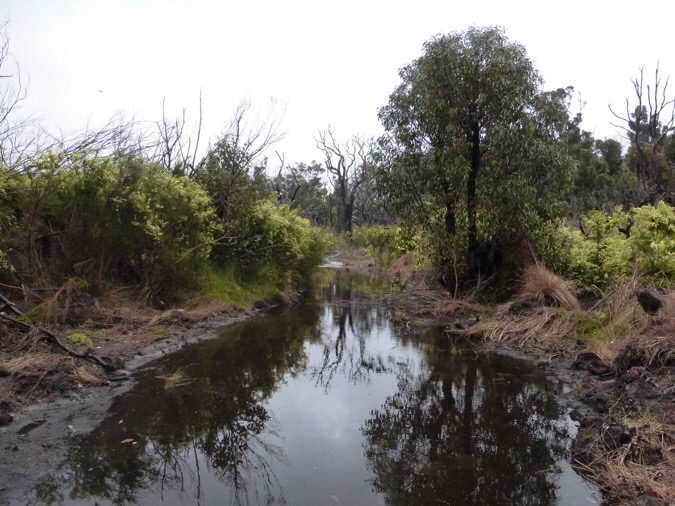 Nope, not going that way.

Here’s a map to visualize it. The gray is what was closed, green is the diversion, yellow is the Bib, and the red road paralleling it is what I walked. It may have added a bit in length, but definitely saved time and energy. 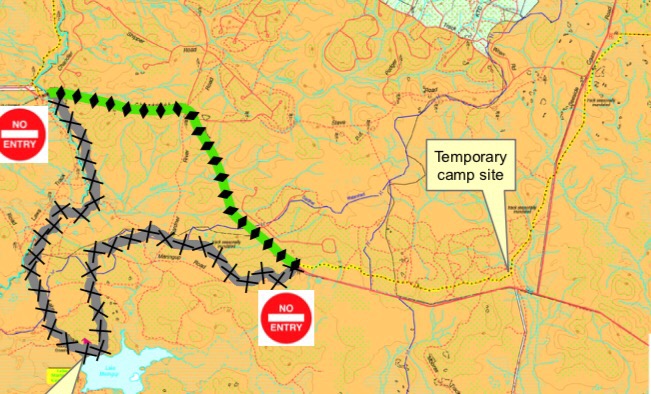 While walking the road, I needed some entertainment, so I finished the David Sedaris book that I had. It was fine to have some short stories, but I don’t think I’d want to read or listen to another one of his books. I realized I still had the end of Mindy Kaling’s second book that I had started back in Portland and that was fun to finish. Not as good as her first book though. Then I moved on to a new one that came out this past year called “When Breath Becomes Air” by Paul Kalanithi. It’s the autobiography of a man that had just finished school as a neurologist and gets terminal cancer. I heard it’s pretty good and so far it is. Also a good reminder to live life to its fullest while you can.

There are three campsites in a row that have no shelter because of either flooding or fire. The whole day today had no shelter and I wondered if I’d get a chance to eat lunch during a dry period. If I did, would I even find a dry non-windy spot to enjoy it? As I was waiting for the rain to stop for a period of time to possibly stop, a miracle happened! I walked up on an information booth for a side road that led to D’Entrecasteaux National Park that had a small roof over it. Somehow I had found the one dry spot the size of my body that I could sit at for lunch! It was amazing! 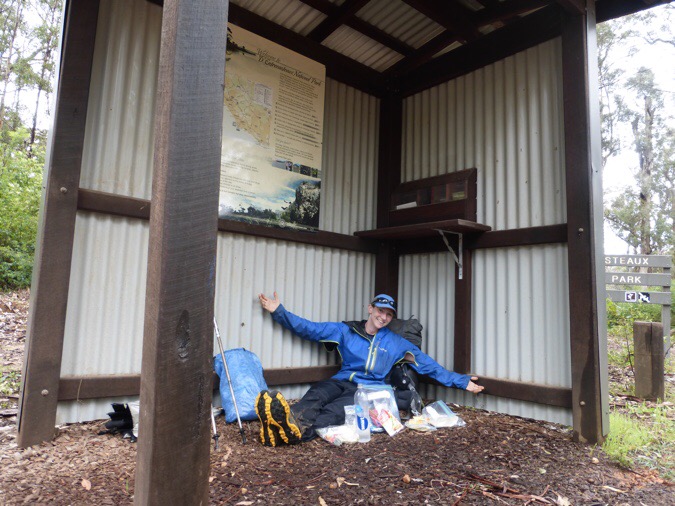 The remaining few hours after lunch was more of the same road walking. The day seemed to go by pretty slow. I think it was just a combination of having done the big miles yesterday, today’s weather, and the monotony of the road walking few bends in the road.
Around 2:30pm I got to the other campsite that had a shelter with no roof. This is where the others I camped with last night would probably be camping tonight. I still needed to do 7km to reach my minimal requirement to keep my schedule this leg. Again, I am shaving off one more day from my schedule to ensure that I can make a flight that I have that goes to New Zealand and will layover in Sydney for 24hrs. My cousin lives there and I am aligning it with a day that he will be able to take me around Sydney for the day. I’m glad I know early enough to spread out the miles so it’s not too taxing. Yesterday’s big day helped. Normally a 40km day wouldn’t be as tiring as it is today, but the combination of all those factors I listed before seems to be making it more tiring. The terrain of the road was a bit firmer, and my feet needed a rest. I took a break in the newly constructed area for the new campsite’s toilet that is not in place yet, but is shelter from the wind and has a roof. It’s so big a tent could fit in it and that’s where the Swiss couple slept at the other camp last night. I did some writing and rested for a bit before heading out for the rest of the miles today. 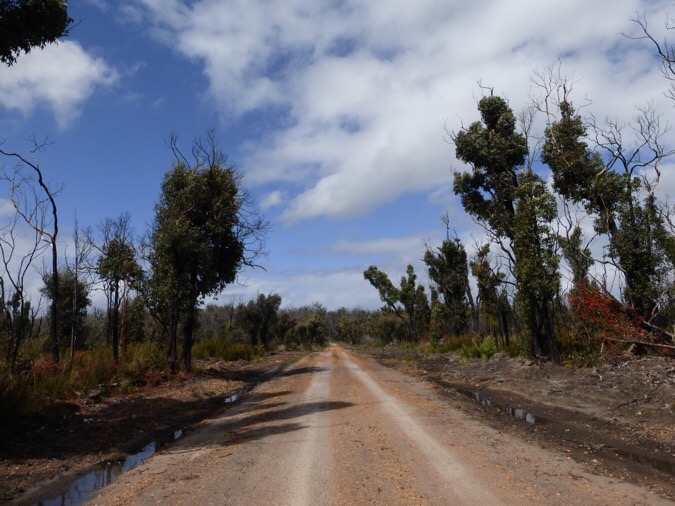 The clouds lifted temporarily, and now that I was back on the official route, I was on softer sandy terrain. I put in some music and the last couple hours went by nicely. The clouds did return along with spurts of rain and even a faint rainbow! 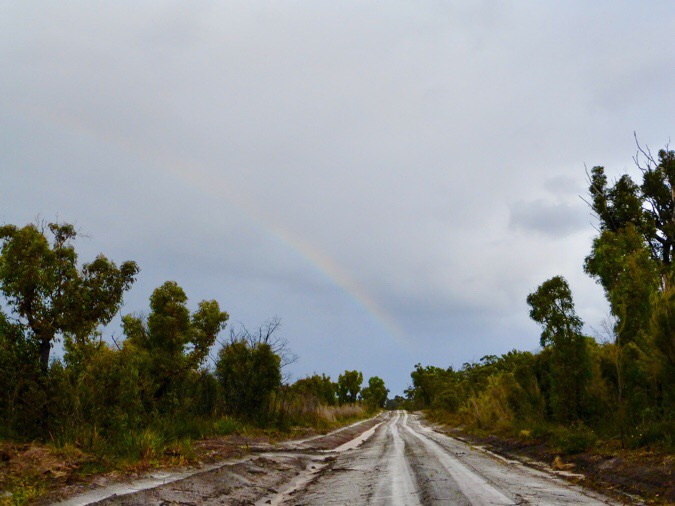 I passed my 40km mark and kept my eyes peeled for a good tent spot. The clouds got darker and I knew another spurt of rain was coming. My pack had just dried from the last one, so I hustled to find a spot and setup before the rain came down again. Fortunately, at 5pm, a perfect spot came at the bottom of a descent where it was more sheltered, so I took it and hurriedly pitched the tent as sprinkles began to fall. The rain came down steadily for a bit just as I was getting in the tent. Perfect timing! That’s how I like to end a day. It’s nice to be setup so early and have the blog done as well. I get to watch an episode or two of Bloodline tonight! 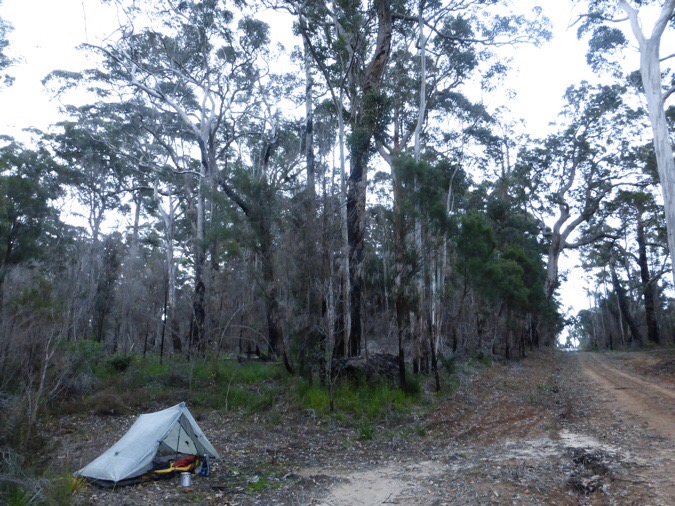