I have to say that after these past two days, I have reached my tolerance level with the rain. It rained just about the whole night last night, and I didn’t sleep much. Every hour or so, it would rain hard for 10-20 minutes and then stop and go back to a light rain. It was still raining when I woke up this morning and I had to mentally prepare because it was only 48F/8.8C and I knew I was entering the section that is known for a lot of standing water that you have to wade through. Fortunately, I got a window of blue sky and was able to get out at 6:40 while it wasn’t raining and stayed dry the first 45mins of the day.

Man, I don’t know what to say about today. I am so done with rain. This section is called Pingerup Plains. It is a very flat sandy area that does not drain well, so there is a lot of standing water to wade through in spring and winter. Normally, it would be pretty well dried out by now, but lucky me, it’s an exceptionally wet year. I waded through standing water probably 70% of the day today and it rained at least 50% of the time. Temps hit 60F/15.5C when the sun was out in moments, but it was mostly in the mid 50s/13C. The “fun” started around 8 AM this morning and did not stop the whole day. 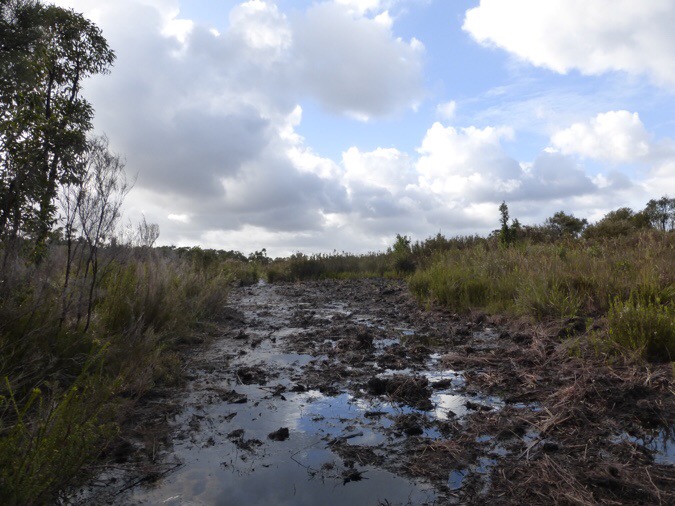 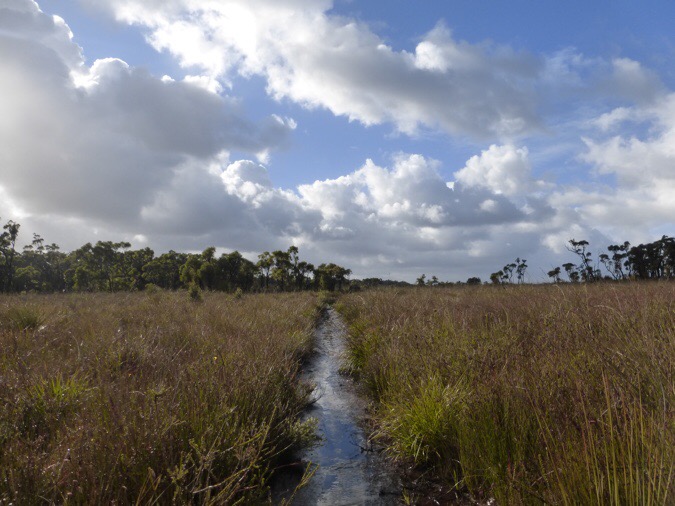 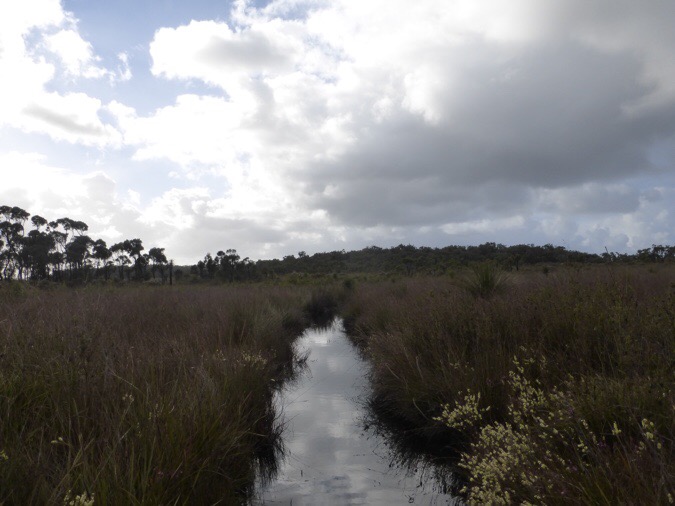 From 10-11am, there was a nice period when the clouds cleared a bit and the sun was shining through, so I was able to dry things out from last night. I don’t carry a groundcloth for my tent, which is usually not a problem, but if I go through a full night of rain and I’m in a spot that doesn’t absorb water, the standing water soaks in through the tent floor at the contact points of my sleeping pad and the tent floor. I didn’t know that had happened until I went to roll it up this morning, so it didn’t bother me while I was sleeping, but it meant that I needed to dry out my sleeping pad as well when I dried out my tent today. I’ve only had that happen a few times and I really didn’t have a choice of finding a dryer spot last night that didn’t have standing water already there. Everything is pretty saturated. Plus, that was a lot of rain last night. I don’t know that even a groundcloth would’ve kept it from soaking in with how much standing water was there. I am so over all this water! 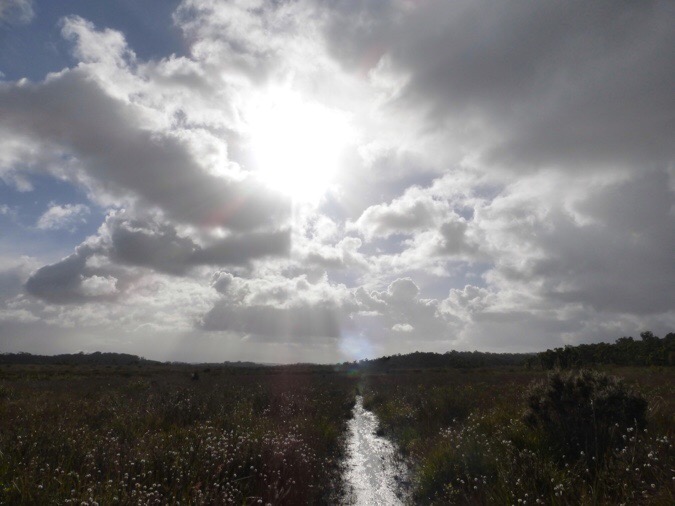 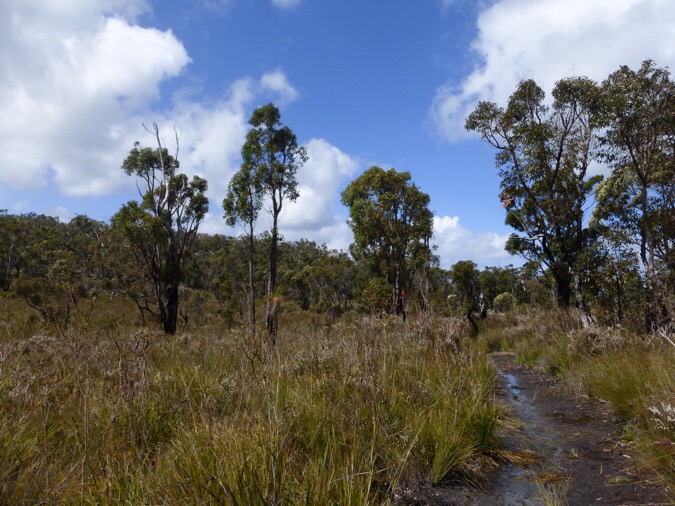 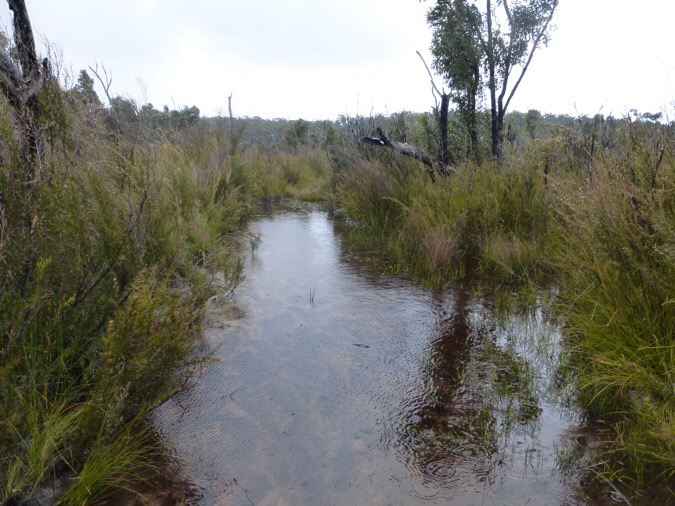 When I passed a shelter this morning, I saw that there were about five people just ahead of me that camped there last night and would be at the shelter I would pass in the afternoon. When I got to the next shelter in the afternoon, I was surprised to find it empty. It was odd because only two of them signed the logbook and the others had not been there apparently. After taking a break at that shelter, I left and ran into two women coming towards me that were doing a section hike. They had run into the couple that signed in earlier and said the other three had done a side hike to hitch around the section. Good call on their part! I’m not one to skip, but if you don’t mind doing it this was a good thing to skip. Here is a photo of the women I met, Lorraine and Donella. You can see Donella’s pack is one that also has large pouches on the front. It is something that is popular out here and I’ve been trying to get a photo of it. I’ve heard people refer to them as balance packs or something like that. It is called the Aarn Featherlite pack. 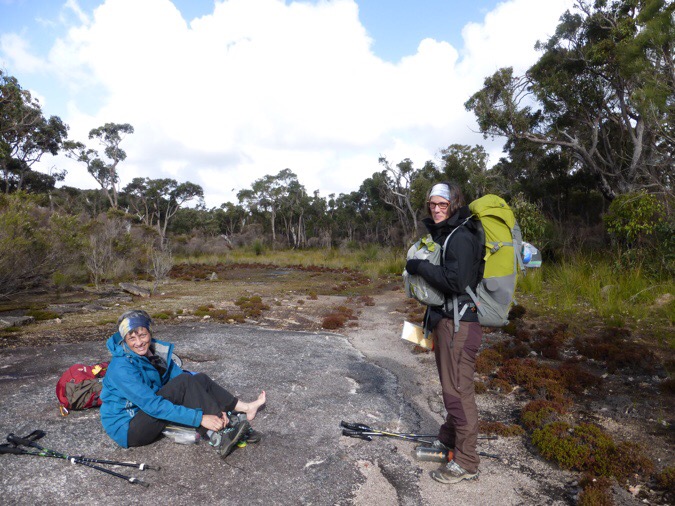 I also got an opportunity to post the blog for the first time in two days earlier today. That last section is the longest I’ve gone without solid reception. I just barely got the blogs posted before the rain hit again so at least I didn’t have to stand in rain to post and was able to sit down. 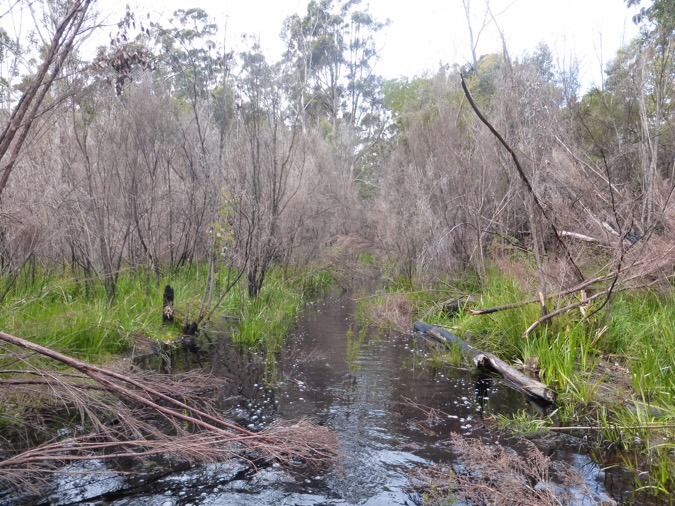 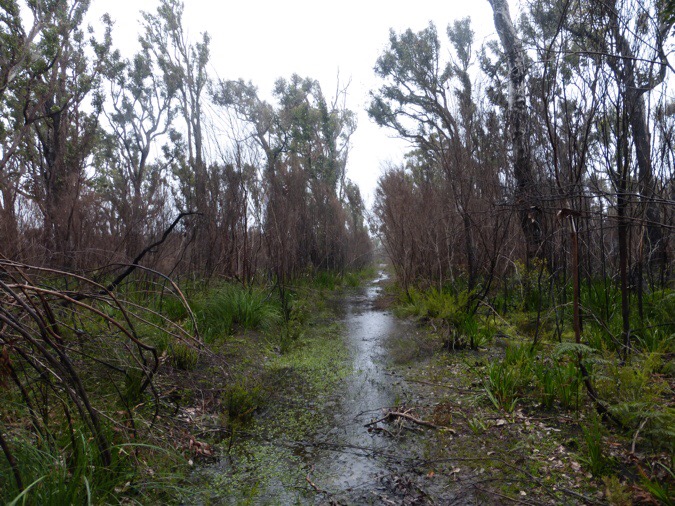 Although it was quite cool out today, I was thankful that most of the water was somewhat warm to walk through and that felt good. The sand did build up in my shoes over the day, and twice I stopped to empty them out because it hardened with the water and felt very hard under the ball of my foot. I am glad my feet were fine today and they are not sore or blistering at all, so there is a positive! Hopefully they will get to dry out tomorrow. 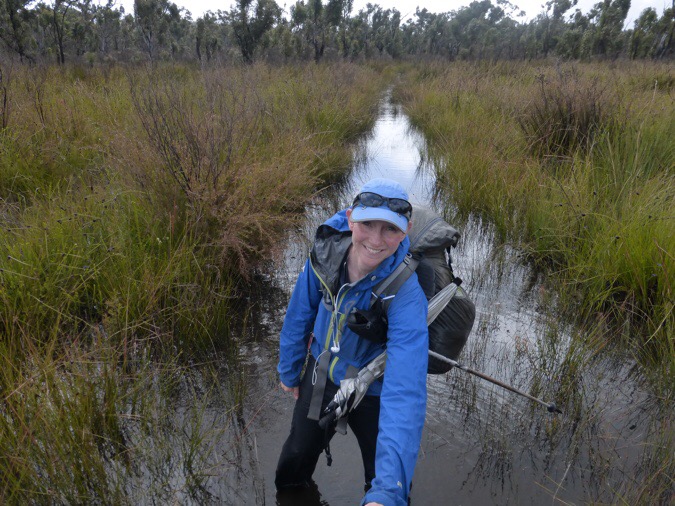 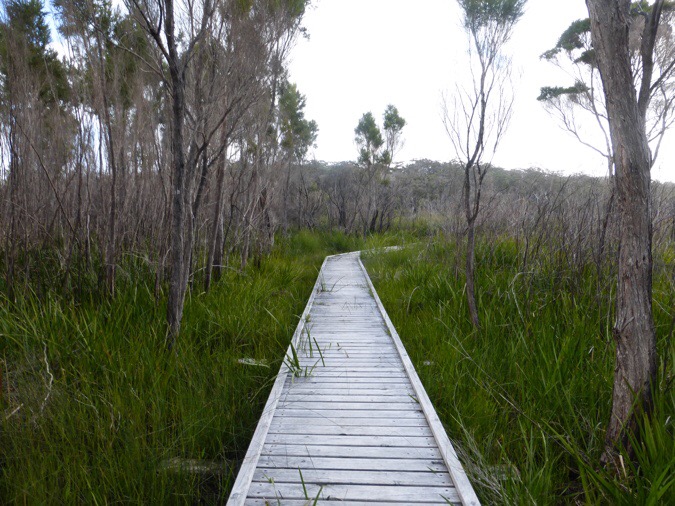 Where was this all day!?

The last hour of the day, I decided to risk going into a more exposed area because I wanted get a little closer to town for tomorrow, and it also was the transition to the coast. I’m almost to the coastal walking!!! I just had to end the day with something other than large puddles and I’m so glad I pushed on. There was still moments of rain, but I was able to get what the guidebook says is the first view of the coast. I don’t see any water, but it was a nice view and ended the day quite well walking up on a sandy ridge out of forest and marsh. 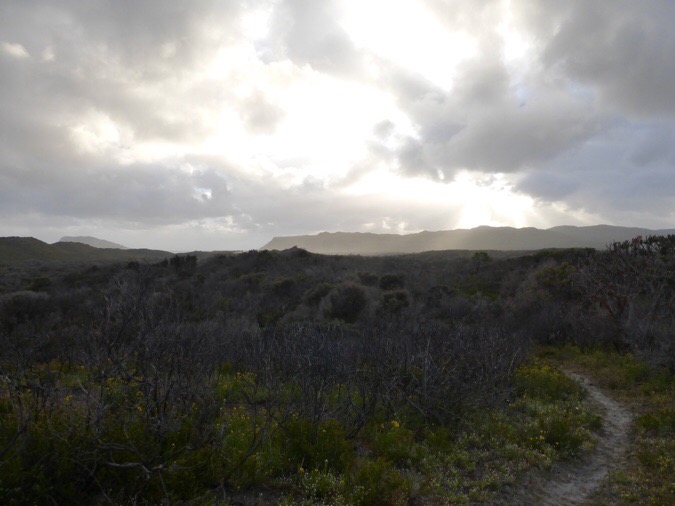 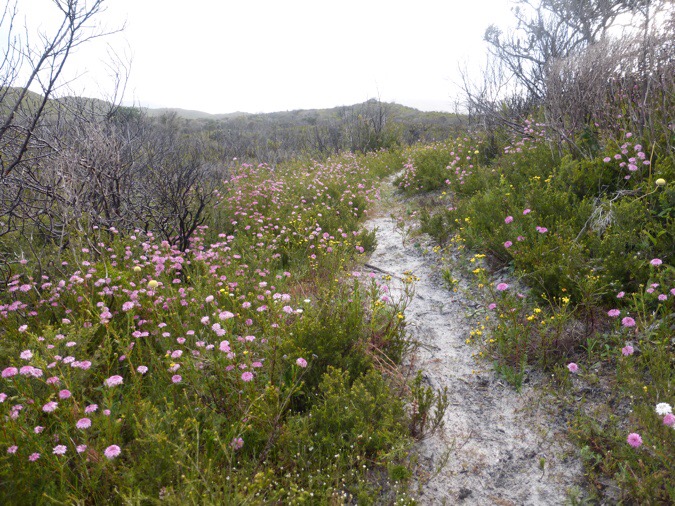 With little sleep last night because of the rain and extra effort put in today with all the water I am ready to sleep. I’m sure I’m going to have some sore muscles tomorrow that I’m not used to using with all that wading. My bad ankle is really sore from pushing through the resistance of the water. It’s about 8:30pm and I’m going to sleep. I can see a great bright full moon as light rain comes and goes. A positive is that I found a sandy spot in a wash that is out of the wind and won’t get over saturated. I’m also pretty proud that I’ve managed to somehow have everything dry except my shoes and socks. Trying to find the positives here. I can hear the ocean! Tomorrow has less of a chance of rain! 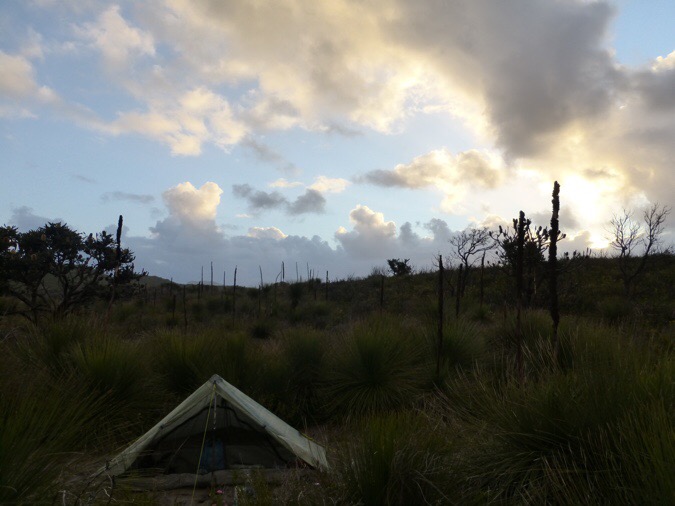