Even though I went to sleep around 12:30am last night, I was still wide awake and up by 5:30am this morning. I knew I should get more sleep so I tried to go back to sleep, but with so much running through my mind as to what I wanted to get done this morning, I just couldn’t get back to sleep. With just a week remaining, I looked at the remainder of the days left. I checked and rechecked my mileage to make sure I am ending on the day that I have scheduled. Then I will take a bus the day after I finish to Augusta so that I can get to the southern end of the Cape to Cape.

The good part is that I will be in a shelter each night if I want to be or I can choose to camp elsewhere, but my end date is set. Once I double checked the schedule, I was able to buy my bus ticket that will take me from the end of this trail in Albany to the beginning of the Cape the Cape near Augusta the day after I finish. Everything looks like it will go quite smoothly. It was a huge relief to have that all cemented. Then I watched this week’s episode of Survivor.

I had a craving for a bigger breakfast yesterday, so I bought some eggs and there were some things left over at the hostel that people had left. I was able to do eggs with some onions, tomatoes, and cheese. It really hit the spot and another woman staying at the hostel shared my extra breakfast with me and had nice bread and some avocado to contribute. This stay at the Tingle All Over hostel was my favorite of all of the places that were hostels. Everyone staying there was really enjoyable, and the hostel itself was quite roomy and quaint. Like all hostels, It was a random coming together of people doing all sorts of travel, but this group just seemed to click really well and be quite enjoyable. It kind of felt like being in a dorm and having everyone doing their own thing but eating meals together, living right next to each other, and hanging out in the common areas. I spent a lot more time talking to people than I have at any of the other places I’ve been. What is happening? Am I’m becoming more social!? Everyone here is just so dang nice!

Since I ran out of time, I did not get to watch this week’s Greys, but I am possibly landing at a place that I think will have internet to watch it tomorrow night or a few days after that. I also have 9hrs on the bus to fill, so it will be nice to have something if I don’t get to it before I finish.

I ended up leaving town about 30 minutes or so later than I intended about 10am. Then I proceeded to have a couple wrong turns trying to leave town and wasted probably 15 or 20 minutes more before I got it right. 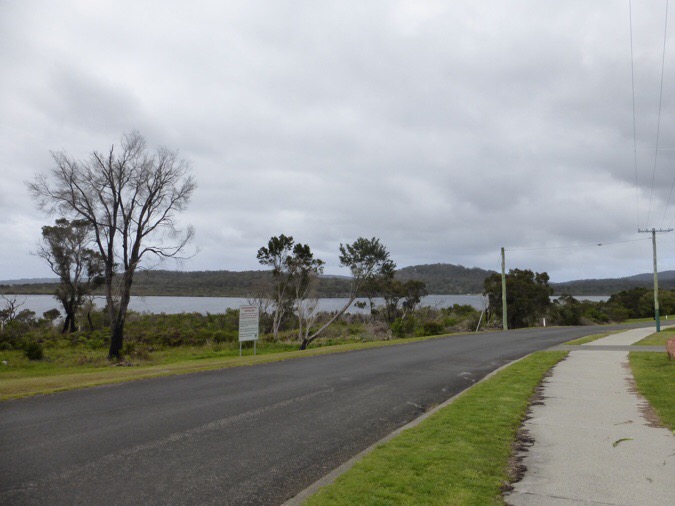 Walpole is along an inlet. 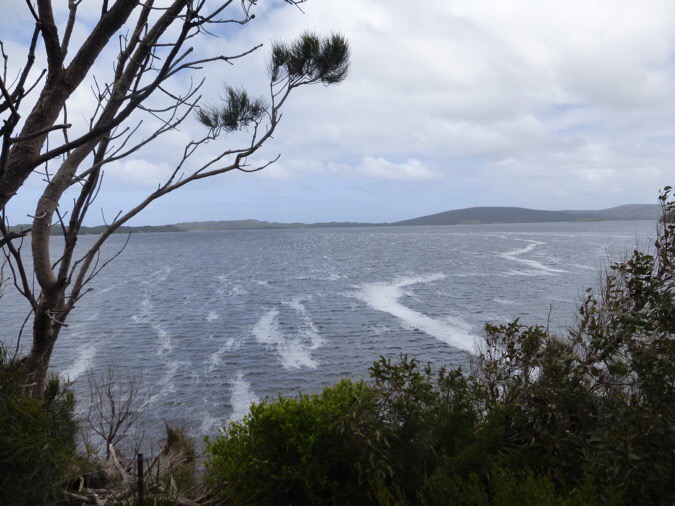 Not long after I finally got on the right track I came upon Tom and Becky who were going to the first shelter today (I’m going to the second one). As we were walking and talking a bit, another man came up that is also hiking the Bib. He’s been doing it in sections and this is his final section that he just started today from Walpole. His name is Dave and he was keeping quite the pace so we ended up walking together for an hour and a half today. He is on a tighter schedule because of commitments back home, so he has done consecutive sections about a week or two at a time at a faster pace than most out here. He’s the first person out here walking the same pace I am, so it was a nice change to walk with another person for such an extended period of time. 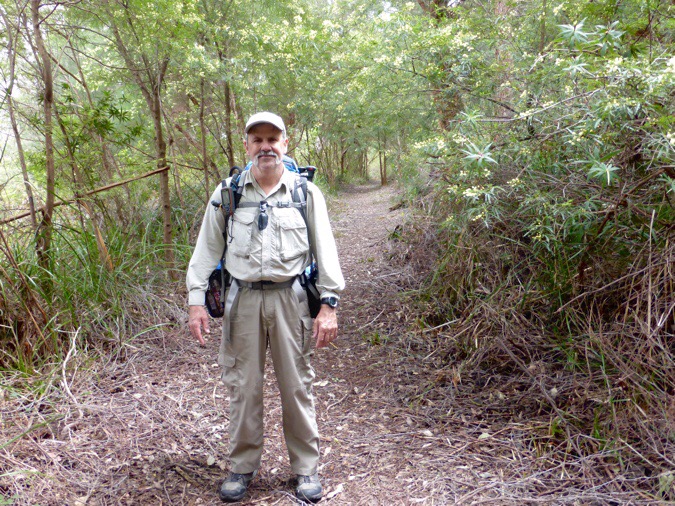 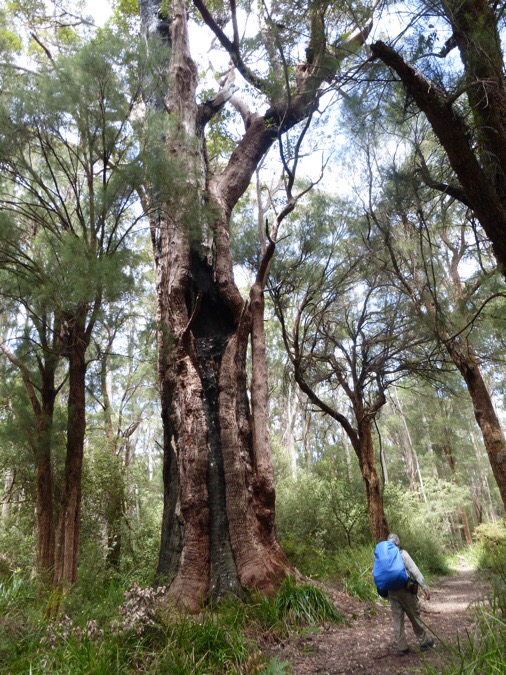 It turns out we are on the same schedule for landing in the same town four days from now that will require a shuttle around an inlet that is quite often too high to walk through. That shuttle is quite pricey. I think it’s only 6mi/10km or so, but is $40-$50 depending on who you take. The price is per vehicle (not per person), so finding someone else to share the ride with is a big bonus. We decided that we would meet up in four days in Denmark, since we are both leaving the same day from there, and we will share the ride so that we will split the cost. Dave was great to walk with.

We got to a boardwalk that had a huge tingle tree you can stand in and took photos for each other. The tingle is unique because it has a shallow root system and base that allows it to be hollowed out by bugs and fire, yet still stand. 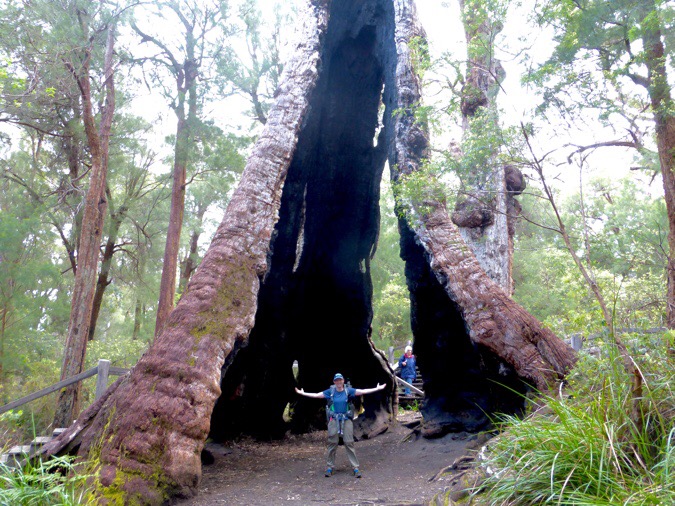 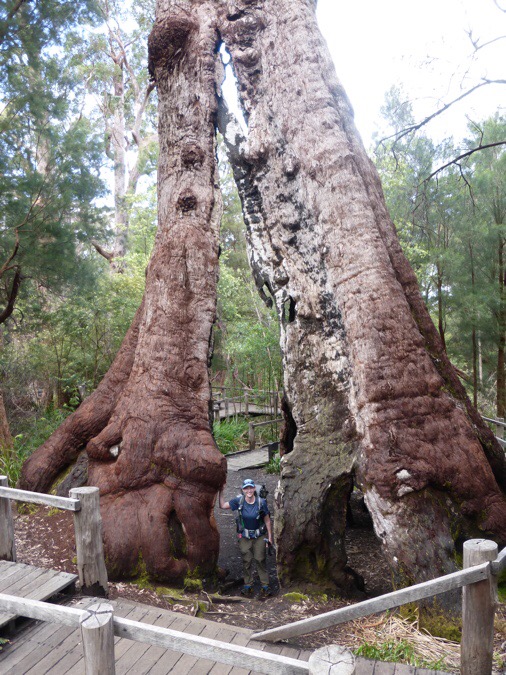 I was planning to hit a touristy treetop walk among the tingles the second half of the day today that closed at 5pm. It wasn’t until we had been hiking for about an hour and a half that Dave realized I wasn’t going to make it there before closing. I had totally miscalculated in my head how far it was into the day, and given my later start today, that had me arriving right when it closed. I really didn’t want to miss it, so with 12mi/20km left, I realized I could pick up the pace and jog downhills and some flats to still make it in time. I booked it and took off to give it a try. 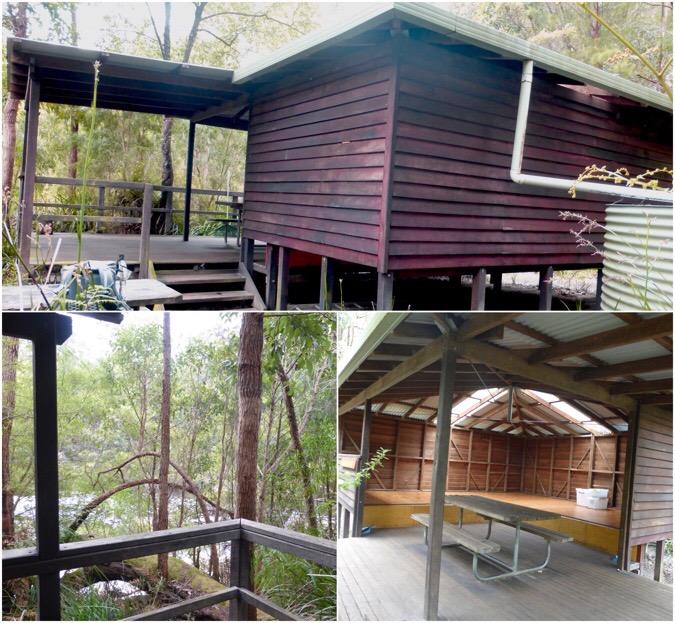 It was not the relaxed version I had in my head for today and that was disappointing. It opened too late in the morning to wait, so it was either make it today, or not at all. I got there at 4:07pm figuring that I had plenty of time if I got there by 4:30pm, but I didn’t know that the last ticket was sold at 4:15pm sharp. I just barely made it! 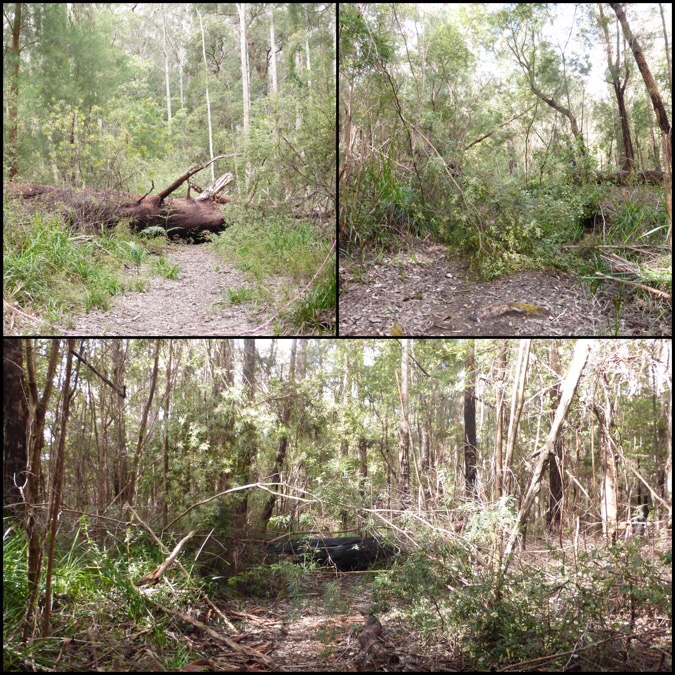 Many downed trees slowing progress the second half of the day today.

In all the fuss, I couldn’t find my wallet. I thought I’d put it closer to the top of my bag, but it was still buried deep where I tend to hide it so I don’t lose it. It really got the stress going for me after pushing so hard to get there and then thinking I might’ve lost my wallet. I just needed a big deep breath by the time I entered the treetop walk. The whole area is called the Valley of the Giants. 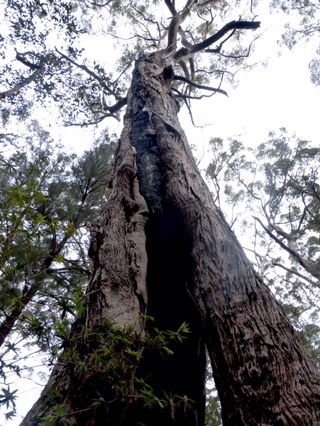 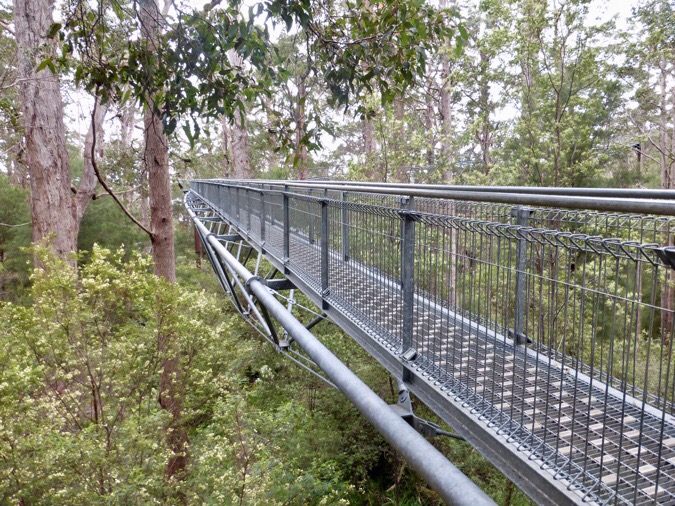 The treetop walk is a loop around an elevated ramp through a grove of tingles. Though not the prettiest tree in the world, it is quite unique. They only exist in this immediate area. They are thought to be one of many things that have survived in this damp climate that originated from when the world was one large continent known as Gondwana 45 million years ago. 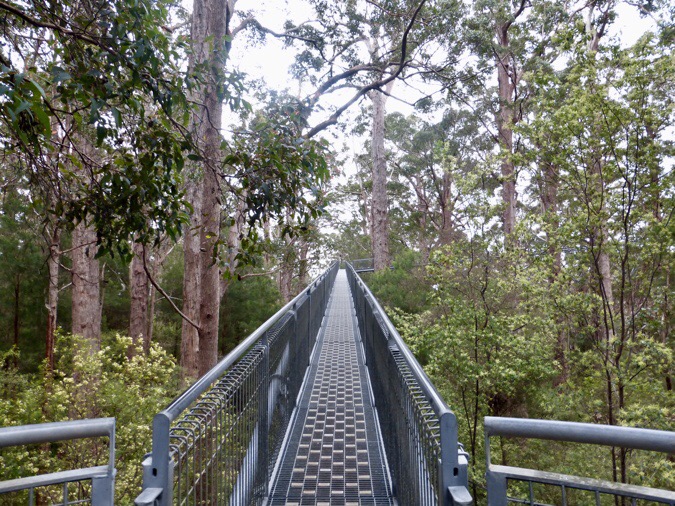 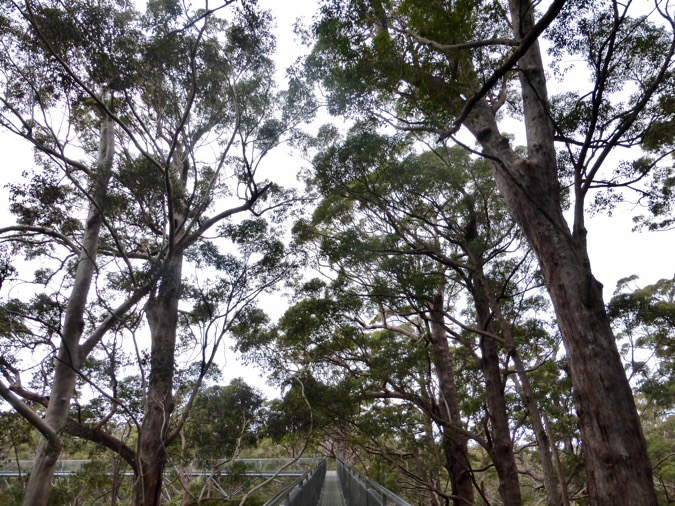 The walk was cool, but just 600m (and yards). There was also a lower trail called the Ancient Empire that walked along the base of the tingles that was 450m long. Overall, it was nice, but way too overpriced seeing as though I’ve been hiking through the exact same thing. Six years ago, when Buck-30 did this hike, the tour was $7AUS. Today it was $21! After working so hard to get here, I just sucked it up and paid, but it ended up being that the only new thing I paid for was a 15min walk up on the treetop section. Way too overpriced. 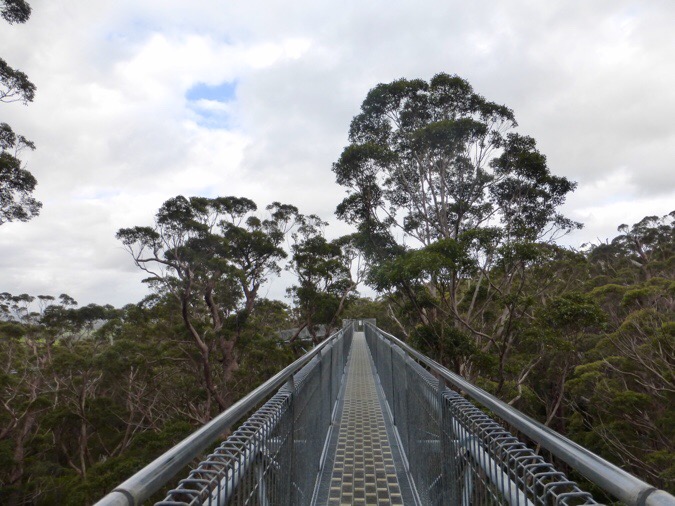 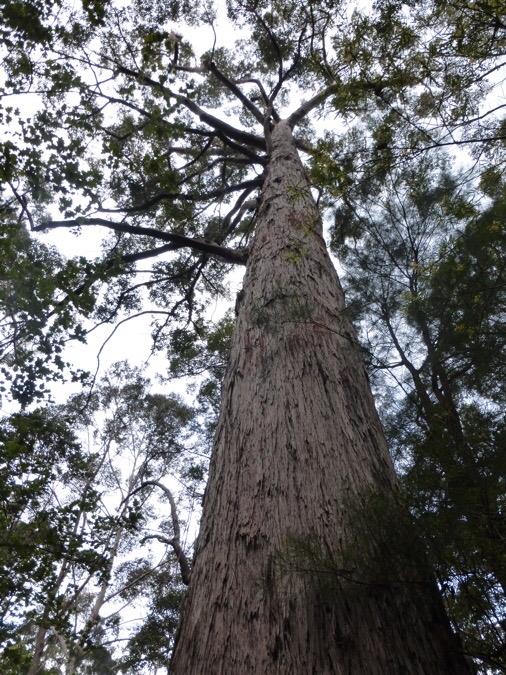 There were interpretive signs to read about the flora and fauna. One was about the sword grass, which I found amusing because just earlier today I got good cut on my finger walking by one hanging over the trail. It just sliced me like a big paper cut and I was paranoid the rest of the day walking near them. I find it funny because it’s yet another thing out here that makes me think of something that would be in the world of Harry Potter. 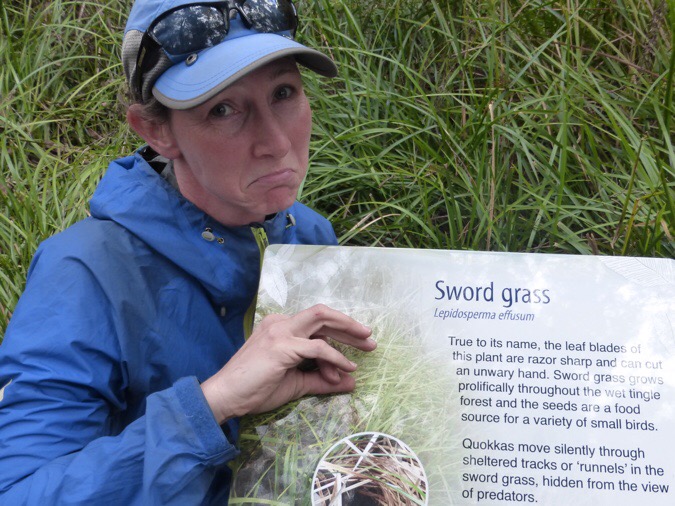 The shelter was just another 20mins after the treetop walk and I arrived around 5:30pm to a full campsite with five others there. It was immediately a great group really enjoying one another’s company (two couples from Perth doing long sections and one solo American end-to-ender). The solo hiker ended up being Mike (Hui) who is the Triple Crowner (AT, PCT, CDT) doing a yo-yo of the Bib that has been just ahead of me all trail. He single hutted today and did a half-day because this group was so fun and they were celebrating a birthday in the group. 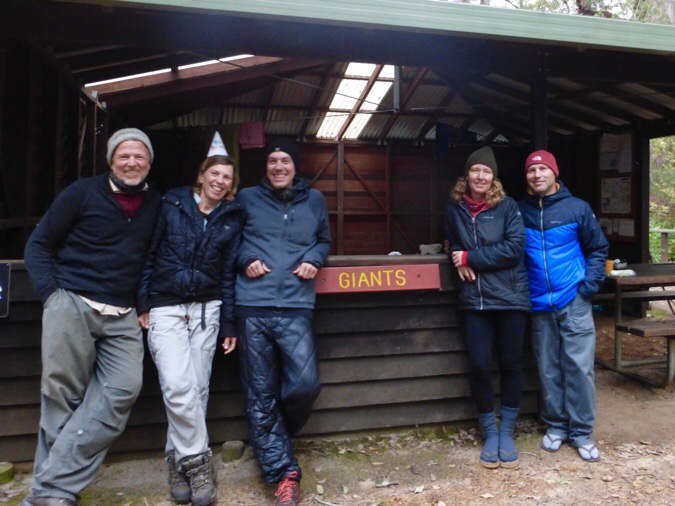 I chose to tent in my own space, but ended up getting to bed much later because they were all so fun to talk to. Mike and I are going to start out together tomorrow since we are pretty much aiming to land at the same spot tomorrow night. Man, this trail is getting quite social at the end! It didn’t rain except for mist a couple times today. It is lightly misting now, but hopefully won’t rain much tonight. At least it didn’t rain while I hiked and tomorrow looks to be good too. Maybe good weather really is finally here! 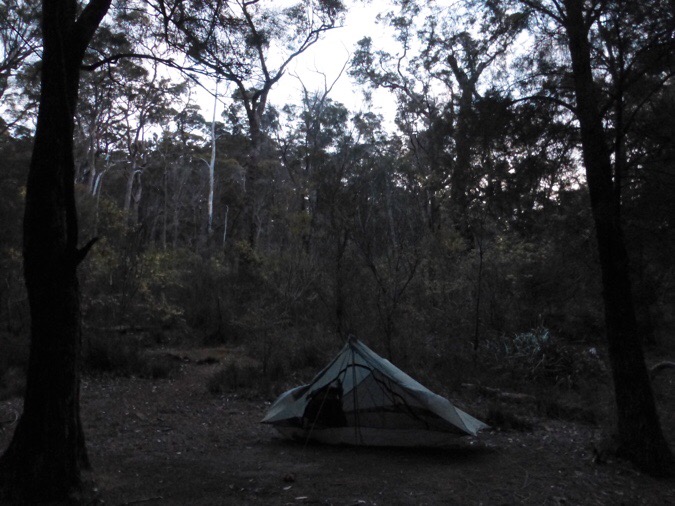